This post is a first ever. It is dedicated to one subject only, a play that touched me so deeply, I can't recall one in the past to have left such an impression. Cultural events that Bill and I have enjoyed often come up amongst the bike, bird and beast stories, but this time, there is an urgency in my need to get the message out to as many people as possible. I really, really hope to convince you and your friends and family to go see this performance. It is important for so many reasons, but I will give you just one to start. The combined depth of talent involved in this production will leave you in awe. We in Vancouver are incredibly fortunate that Firehall Theatre was able to arrange for MT Space Theatre, a company based in Waterloo, Ontario, to come here. Take the time today or any day up until the 2nd of April, and no matter how busy your life, go see "The Last 15 Seconds" at Firehall Arts Centre!
Bill and I saw it yesterday. We almost missed it. When I learned the subject was of a suicide bomber and his victims, my first response was that there was enough pain in the world. I didn't want to spend even a few seconds of my non-working time thinking about a disturbing issue that mystifies and angers me. But, something made me click on the youtube video that was included in The Firehall's notification e-mail. It gave just enough of a taste of the variety of creative strengths of the cast, producer, and stage crew, that I began to reconsider my initial reluctance to see it. Bill was of much the same mind, but after seeing the video, ordered the tickets.
We arrived to find that the audience would be a very small one. Not a fan of big crowds, we were just fine with that. We spent a few minutes before the show sitting on the outdoor balcony, enjoying the cherry blossom tree, the sun, and.. 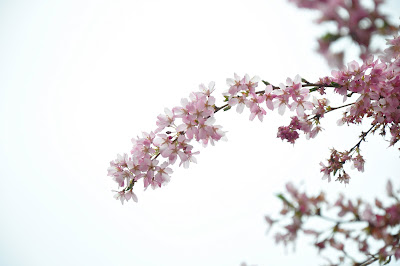 the imitation window painted alongside a real one. 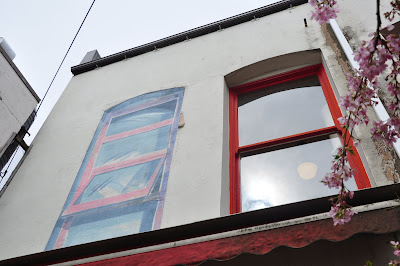 Since photography is forbidden during performances, I always try to get a before-the-show-shot of the stage. What I could never have predicted was how effective this simple set would be. Combined with brilliant lighting, the backdrop magically transformed from scene to scene. 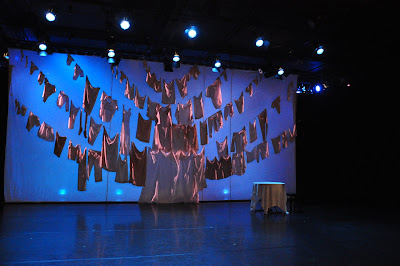 The show took one hour and twenty minutes, with no intermission. The time passed in a flash. Before we knew it, we were outside, talking with the actors. I found myself overcome with emotion and completely inarticulate as I babbled on about how impressive the performance had been. Trevor Copp (left), Ann-Marie Donovan (beside Trevor) and Pam Patel (right) were easy to talk to, and happy to share their thoughts with us. Trevor talked about the need to shed the intensity of emotion after a performance ends, and how that dynamic changes on days when there is both an afternoon and an evening performance. He told us that the evening performance is quite different as the leftover charge from his afternoon character transforms the second portrayal. Pam Patel (you will fall in love with her) told me of a Globe and Mail review. She didn't complain about the review, but did add that it wasn't totally glowing. That fact astounded me. Perhaps the review pointed out one thing that could be considered, and that is the possible ambiguity of the title. Marsha Lederman feels that we are led to believe we will better understand the terrorist bomber's feelings in his last fifteen seconds before detonation, and complains that the play does not accomplish that goal. I disagree. The bomber prays and trembles as he prepares to detonate. What more do we need to know? He is terrified but he believes he will be rewarded in an after-life. Perhaps the title could have been changed, since we see into the long-ago pasts of the characters, but that seems to me to be a very small point. Lederman makes one other point in her concluding sentence. That one I heartily agree with: "Perhaps the biggest disappointment of the night was how few people were in the audience to see it." As we were talking, the director and co-creator of the play, Majdi Bou-Matar, emerged from the building, saw me getting the camera set up, and happily jumped into the shot. You can read a transcript of his interview with Intrepid Theatre, a Victoria publication, here. 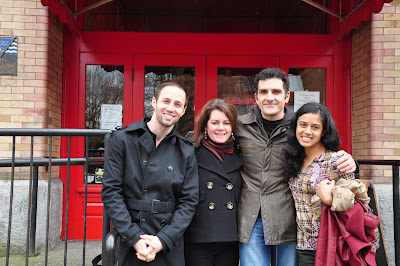 After taking just a couple of photos, the theatre door opened and a hand reached up. There she was, Nada Humsi. She was not only happy, but determined to.. 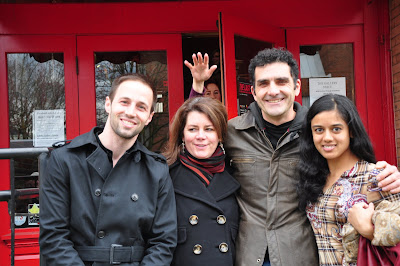 join the group. That impish humour you see in her face came through in the play as well. 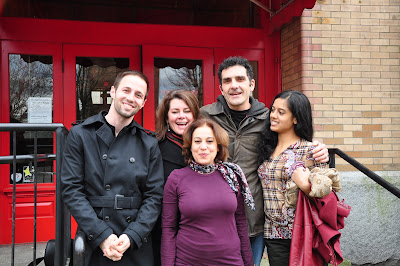 Here are Bill's words, written a day after seeing the play:
I approached this play with trepidation since the subject is so controversial. How could a play deal with the volatile subject of Mideast politics and suicide bombing and not alienate most of the audience. I was mentally prepared to be shocked and disgusted depending on the playwright's point of view. The very first scene dealt with the bombing in the Hotel Ballroom. Amazingly I found myself immediately transfixed by the brilliant staging and the actor's stylized movements. For the remainder of the play I seemed to be in a hypnotic state of engagement until the end when a deserved standing ovation occurred. Nothing in this play offends or is preachy. I feel sad that the subject matter will deter most people from an amazing theatrical experience. It was the most impressive piece of theatre I have seen in years.
I will add that if you are concerned that you will leave the theatre feeling depressed, check out Bill's antics as we rode home along the seawall. 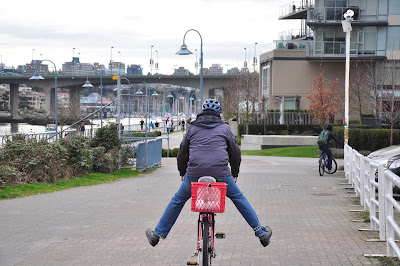 There is nothing trivialized about this subject, and I will admit to being teary-eyed for some time after seeing the play, but those tears were somehow joyful. First among my responses was to marvel at my good fortune in having witnessed the talent, self-discipline and generosity of this group, willing to share and transform a raw emotion into a cultural feast that inspires discussion and greater understanding of our world. 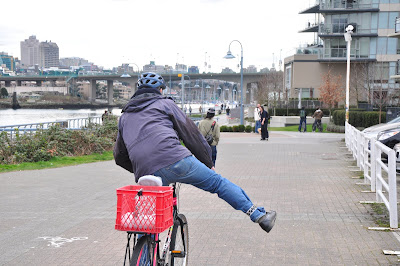 There was one review by Janis La Couvee that caught the joie de vivre of the grandmother (Nada Humsi) in the play. Bill didn't express that in words, but he definitely did so in his actions. 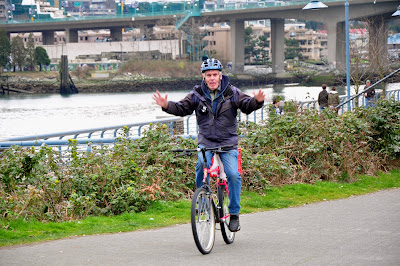 No more to say. This play is a rare opportunity and not to be missed. Bill's smile says it all. Go and see it, and then spread the word! 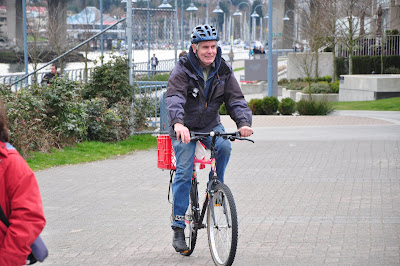