Bill and Carol: Post #10 "Having fun for Our World Tuesday"

For the benefit of any new readers, I am repeating an introductory paragraph with changes noted as they become evident.  Bill joined the blog ten posts ago.  He is recovering from the affects of delirium that resulted in cognitive dysfunction after surgery for colon cancer.  His short-term memory suffered at first but is now excellent.  Still, we keep a memory journal and are employing quite a few strategies to deal with "initiation" and "flooding" challenges that are described in a book called "Over My Head" by Claudia Osborn.  Bill's case is very different from Claudia's.  We have now read 21 of the 26 chapters and I am struck over and over again with both the similarities and the differences in their symptoms.  All I can do for now is observe, respond and strategize, using Claudia's experience when helpful, the advice of experts whenever available and my own instincts as a supplement to this information.  Bill is a courageous and cooperative survivor and I feel fortunate and honoured to have him in my life.


Cuddling Black Jack exactly a week ago.  Still wearing my I.D. bracelet from St. Paul's after a test by Dr Raval that proved my colon to be healthy and ready for surgery in January to reverse my ileostomy. 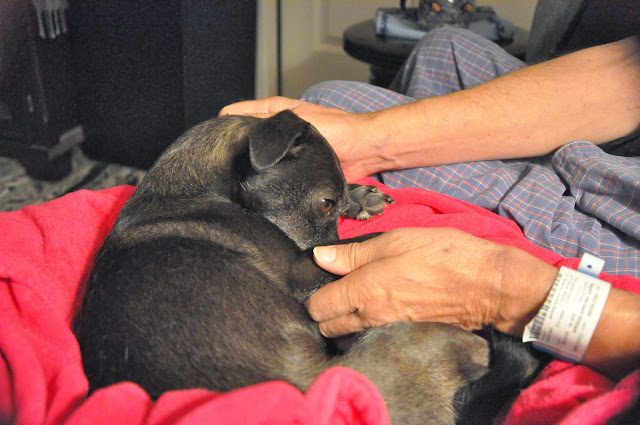 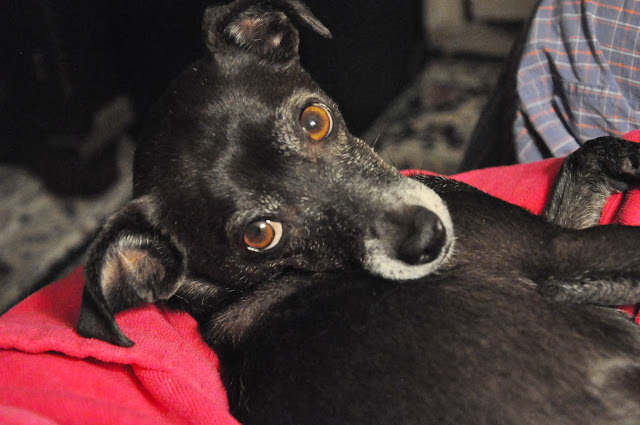 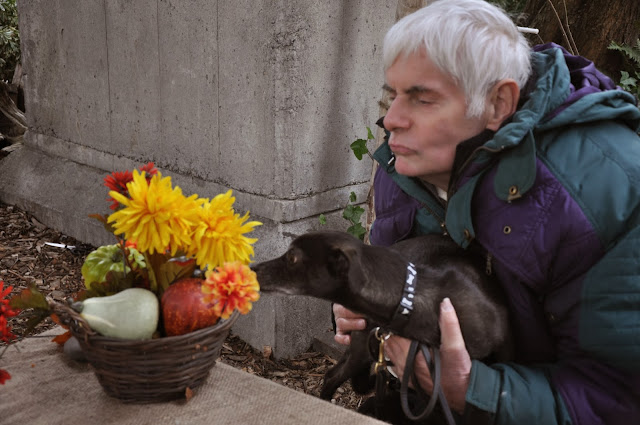 Community gardeners set up this inviting spot where some take a moment to indulge in creative thinking under a city bridge. 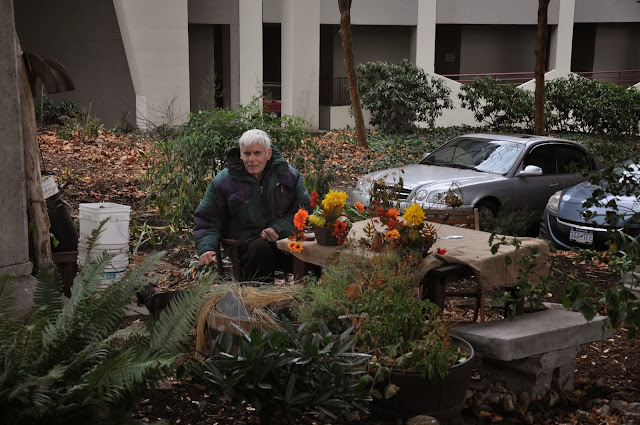 Our David Lam Park crows who recognize Bill and Carol. 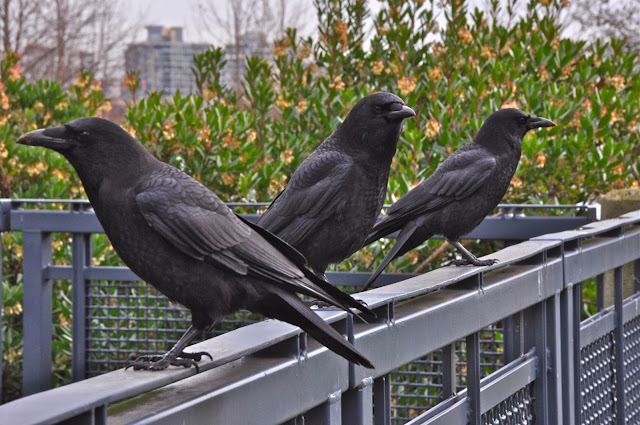 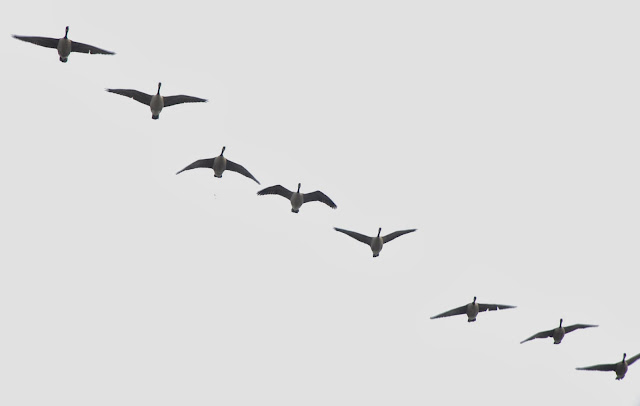 Photo of the shirt that we bought in a Yaletown boutique (Mavi) later that day. The salesgirl said it matched my blue eyes!  Am I having fun yet?  Along with the initiation and flooding issues that make shopping even more stressful than it is for many men, Bill suffers what I believe is a mild form of adynamia.  Sometimes, his expression lacks animation and this gives me a great excuse to take lots of pictures of his beautiful face.  Looking at the photos shows him how he appears to others.  Bill is a quick study.  He needs some reminders but you will see in the next photo of him how drawing attention to his expression had wonderful and very speedy results. 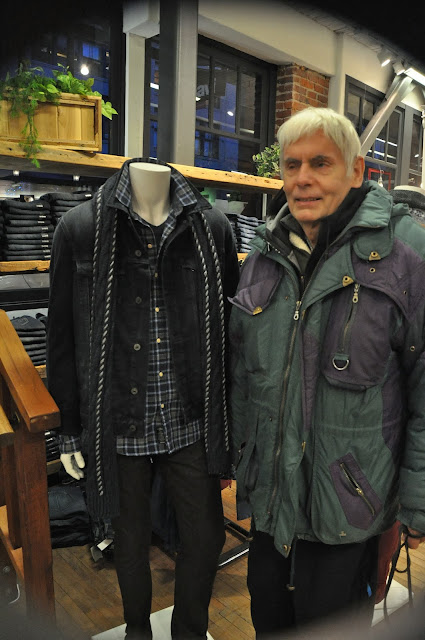 Picture of Carol's daily staples plus a newbie Christmas tree cauliflower.  A caring relative suggested that adding probiotics to Bill's diet could be helpful.  I bought Sauerkraut with this in mind, but so far, we have been unable to open this jar.  I like to think of myself as fairly strong but declare myself beaten this time.  Greens, orange-yellow veggies and lemons are a staple in my diet.  Less so for Bill, but we're working on it :)  The cauliflower has a name (now forgotten) and I tried it for the first time, attracted to its lovely mini-tree shapes. 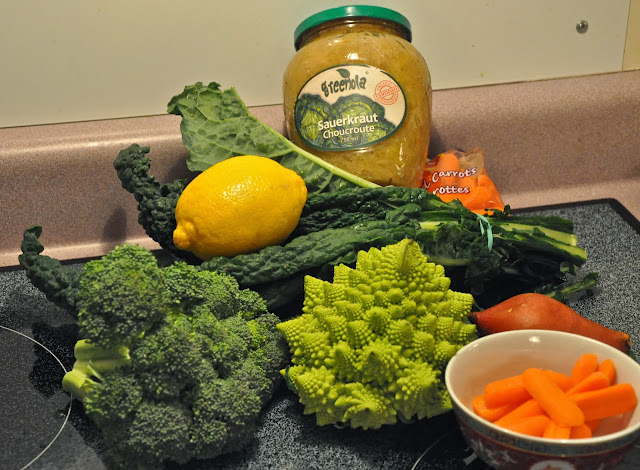 Close-up of the Christmas tree cauliflower.  Isn't it beautiful?  I might add it was delicious! 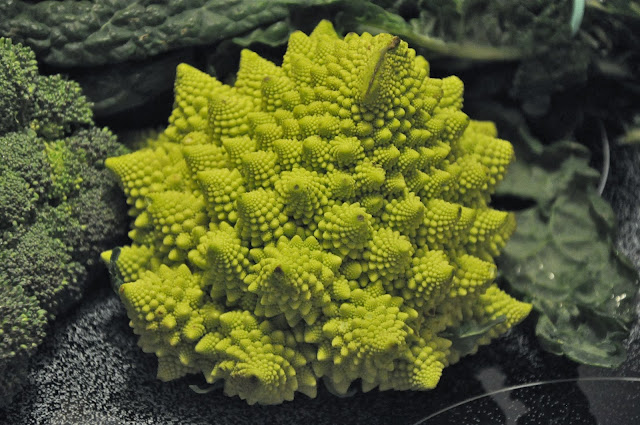 Do the colors match?  I believe that salesgirl was absolutely right.  As for Bill's smile.  It warms my heart! 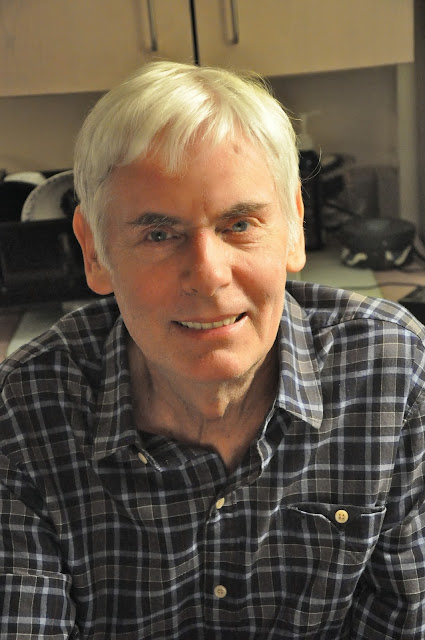 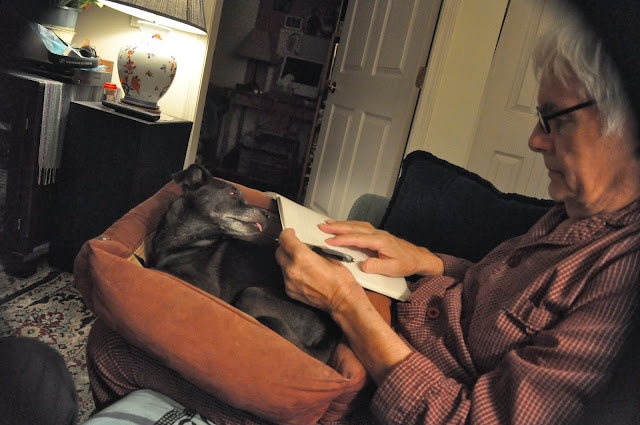 "Hmm, I guess his journal is more adorable than me!" 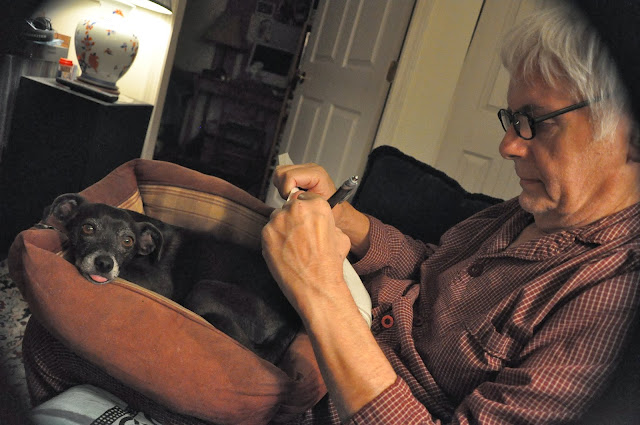 "My adorableness not working today."  "But, I can adjust!" 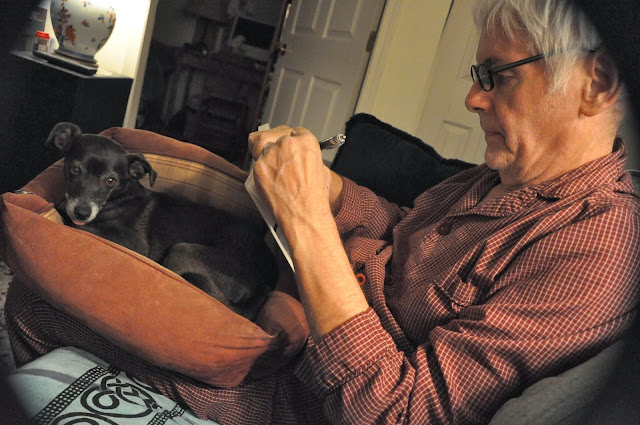 Saturday, April 14th
A neighbor and I are having a conversation at our annual Christmas party. I wasn't smiling but Carol said I was having fun :) 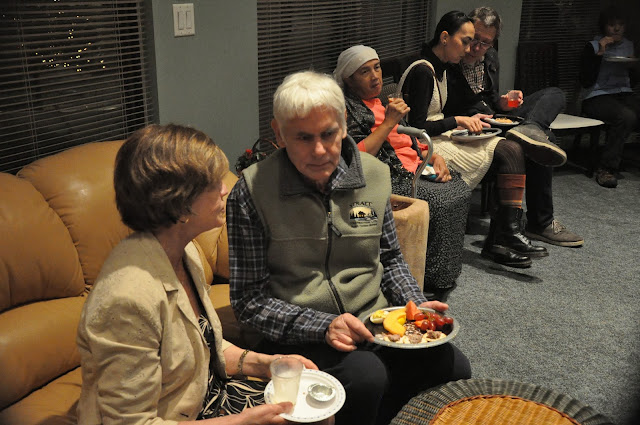 We are lucky in our building administration to have Deborah, George and Nancy. They put in many hours to make life good for all of us.  I second that!  There is one tree in the lobby and another in the activity room, each decorated with TLC.  Add to that delicious treats for the party, friendly greetings every time we enter or leave the building and the fact that Deborah can name every single tenant and give their apartment number.  Sometimes, she can even name their grandchildren!  This is no ordinary apartment dwelling. 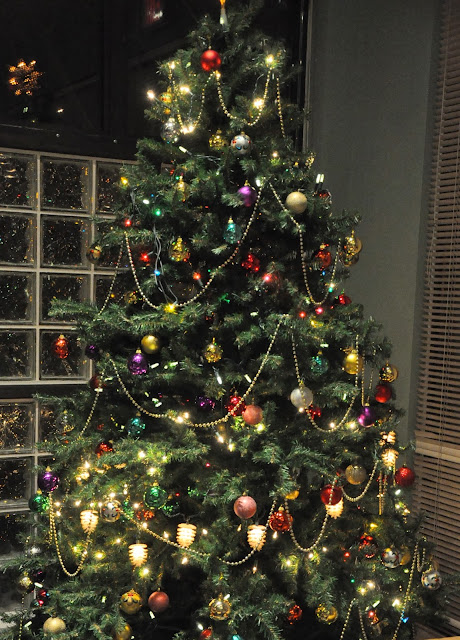 Sunday, December 15th
I confess to feeding the crows more than I should.  It began with one but now includes friends and family :)  My only saving grace is that I give them Black Jack's healthy treats.  No sugar or junk included.  I love this photo with one crow dipping the treat in False Creek to soften it. 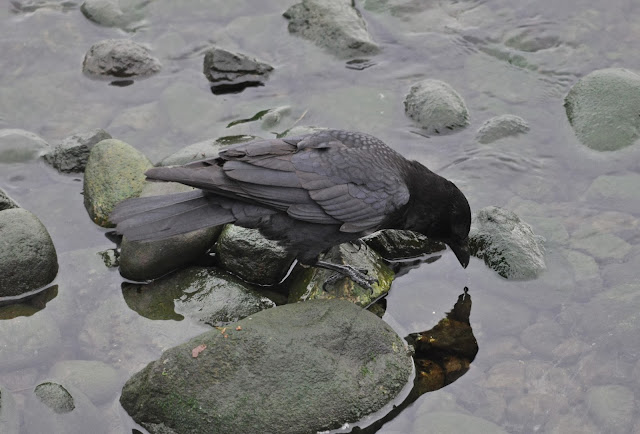 Bill noted these buds opening in the dead of Vancouver's winter season.  Magnolias, I think. 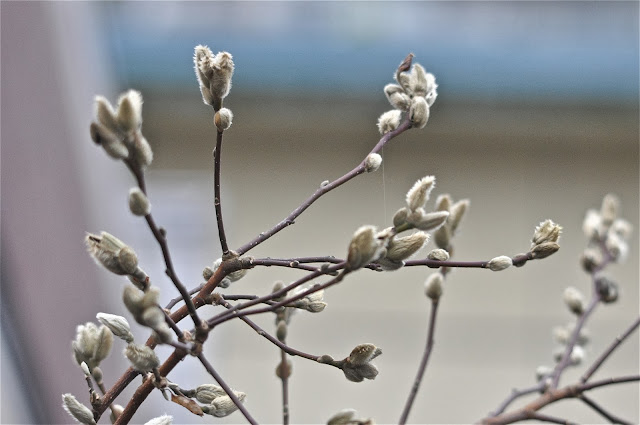 Santa Claus multi-tasking on False Creek.  Yes, that is a cell phone in his hands! 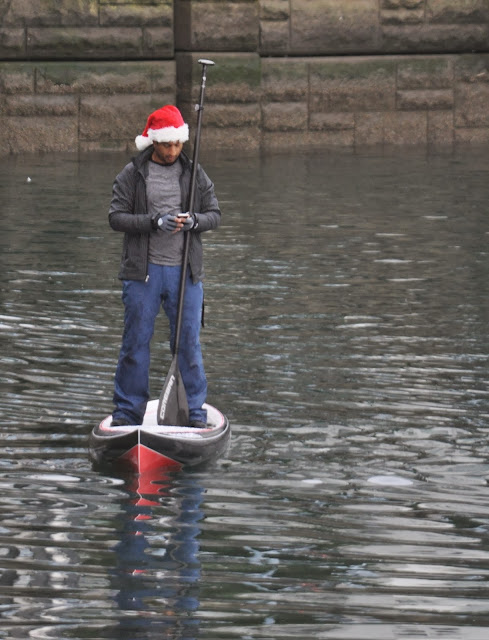 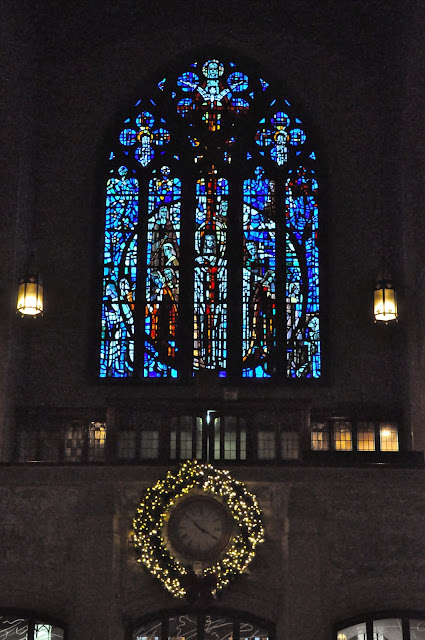 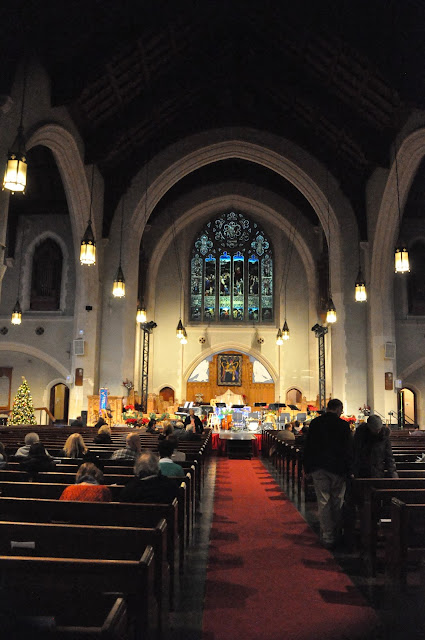 the Jazz Vespers concert at St. Andrew's Wesley United Church.  Black Jack agreed it was a good idea. I thought you were my friend, Black Jack! 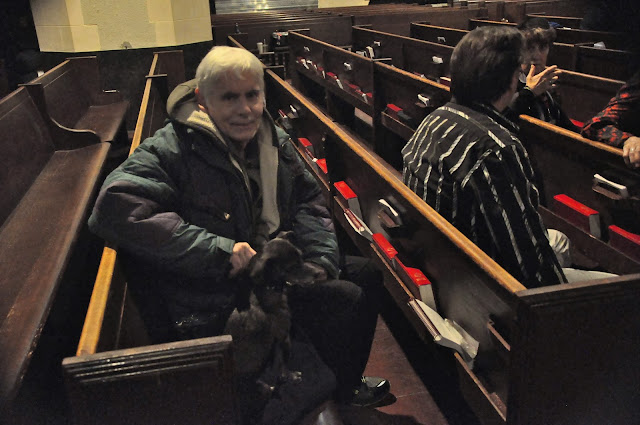 Social/cultural events are not my favorite these days, but the Alan Matheson Septet proved to be very enjoyable. Carol was right; it was a lot of fun.  I only sort of tricked Bill.  We decided to go for lattes at Harrison's Galleries.  I thought in the morning that it would be fun to hear the concert but only mentioned that to Bill after the lattes when we were already half way there and the concert would start in about 40 minutes.  No time to build up anxiety.  Hardly tricking at all.  More like showing the way to a good time.  Wouldn't you agree? 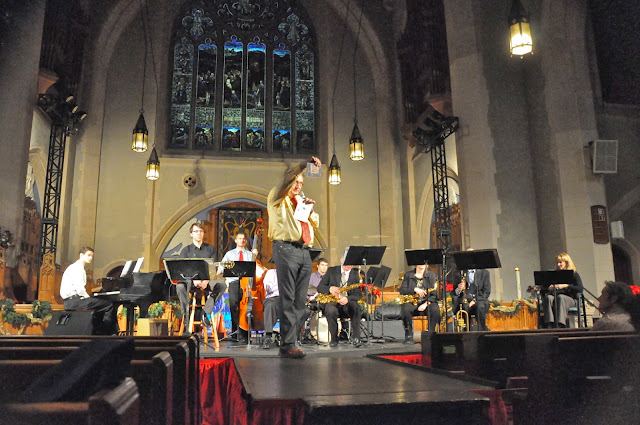 The drummer was hidden behind the other musicians but I found a way to catch this shot. 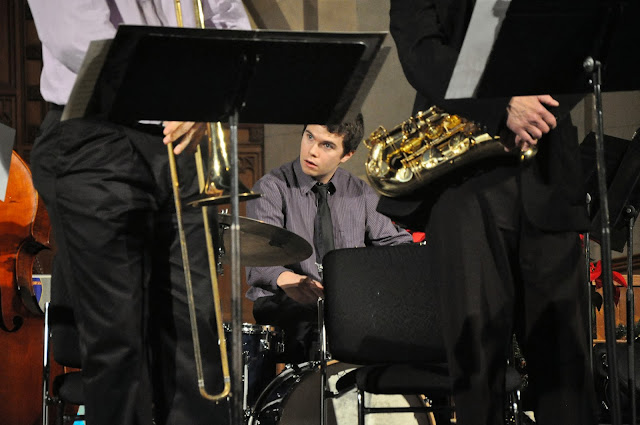 I got a bit carried away with angled shots, but like this one of Alan Matheson, the multi-talented director of the septet. 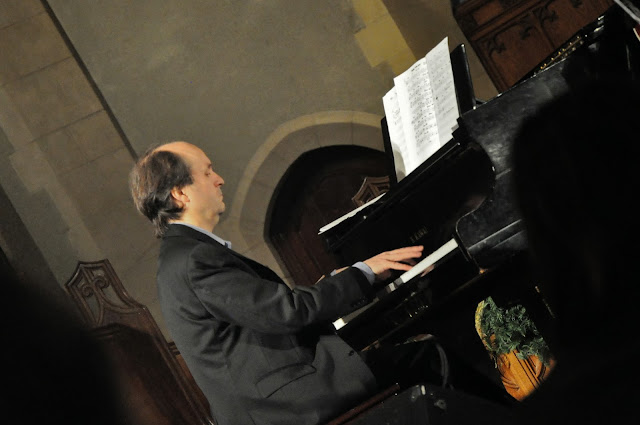 This picture fascinated me because of the floating turret up on the right.  We both came out of the concert feeling energized and enriched. The side view of St. Paul's Lights of Hope seemed very different from the front one (shown in the previous post).  I hadn't really noticed that floating turret but Bill's observation brings new interest to the photo for sure.  One more sign, I believe that his brain is healing. 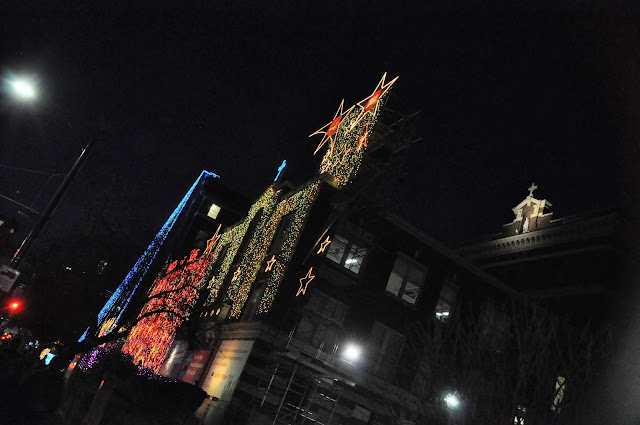 And on that note, we bid you adieu for today and thank you ever so much for stopping by.  For more stories and photos about people from around the world, do check out the Our World Tuesday blog meme.    Thank you to all the hardworking volunteers who have kept this meme going since the late Klaus Peter began it three years ago.
Posted by Black Jack's Carol at 1:52 PM