Dancing in the Rain and Brookifying the Dash

A long silence, I know.  This post has taken quite a few weeks to write.  Since October 24th, when we attended Brooke Malakoff's Celebration of Life, I've been trying to write about my response to that day and to childhood cancer.

It HAD to be written but no matter how I rearranged the words, they weren't "right" and they weren't enough.  The blog waited, frozen.  Today, I finally acknowledge there never will be a perfect way to express the impact of meeting the young people I describe below, but I will try, regardless.

Some of you might immediately know who we were thinking of as Bill "danced in the rain" a couple of weeks ago on a very rainy November day. 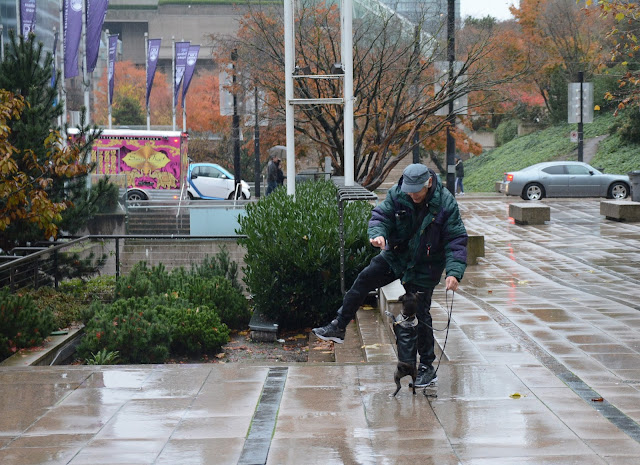 We had never done that before.  We discovered even the literal translation of the words requires a bit more effort than we had anticipated.  The truth is that there's quite a difference in perception, depending on the temperature of the rain, whether you are really dressed for it, and whether or not your dog happens to be especially miserable in it.  Never mind whether, as in my case, your arthritic joints would have preferred a little warm-up, rain or no rain :) 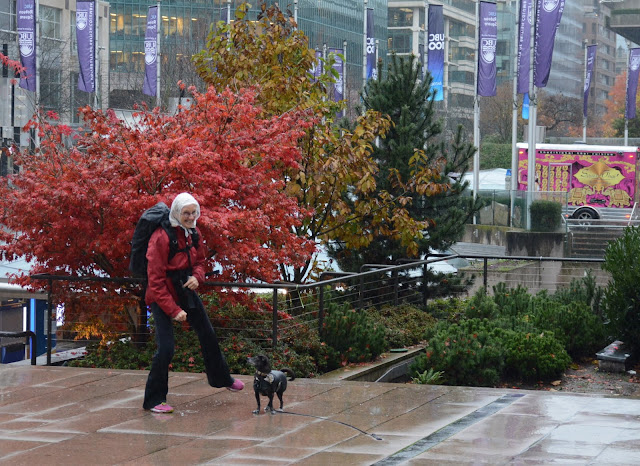 "Dancing in the Rain" was a concept first introduced to me by the family of Lilee-Jean Putt (Dec. 5th, 2010 - Sept. 6th, 2013) though the original quote is attributed to Vivian Greene. 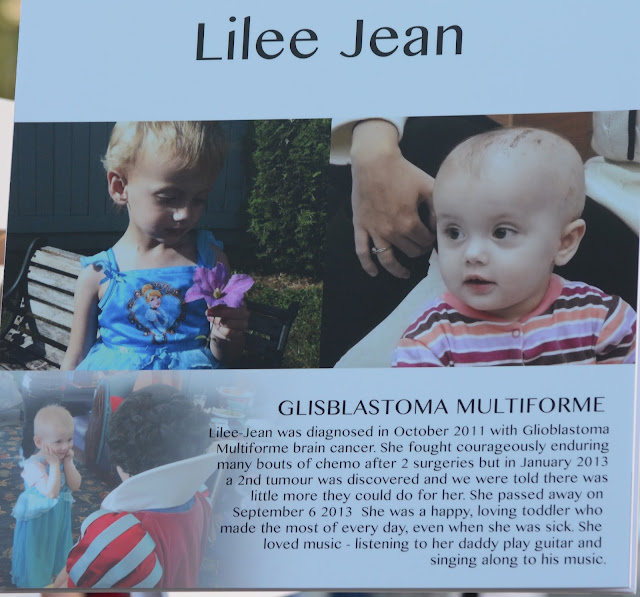 "Life isn't about waiting for the storm to pass.. it's about learning to dance in the rain." For me, those words will forever be associated with the way Lilee-Jean's parents chose to pack all of the love and laughter and happy memories they could into their daughter's short life.  And, talk about facing the most difficult conditions imaginable, when a beloved child is terminally ill. I wanted to take that lesson from this beautiful family and apply it to my own life.  It comforted me that something of Lille-Jean would be preserved and passed on.  Even Black Jack, who hates the rain, could be encouraged to find some pleasure in it. 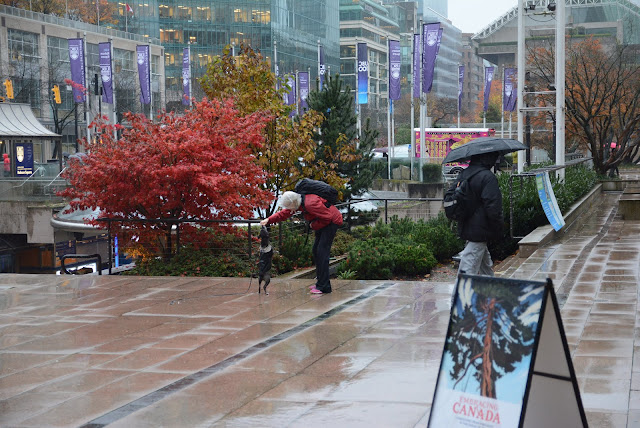 And, I hoped by writing this post to offer some sort of comfort to families that have lost loved ones.  I wanted them to know that their kids' spirits have reached distances they surely could never have anticipated.  But, even as I write that, these words from a woman who lost her beloved son hit home this morning.  Her comment on the passing of Seanny (just a few short weeks ago),

yet another child caught in cancer's cruel grip and now forever ensconced in my heart, echoed a view that keeps creeping into my thoughts, no matter how much I try to oust it: "I wish we could learn to appreciate the value of life, without our children having to be the ones to teach the world that."  Seanny is shown at the right.  You can read more about him here.

I echo that lady's thoughts for sure, but I will all the more fiercely live my life by the lessons taught by those kids, not to waste a moment of their precious lives.  Who would have anticipated that strolling through Granville Island in August, 2012 would take me to the world of childhood cancer, one I didn't want to recognize but couldn't ignore.  It all started with a young busker's beautiful singing voice. I had begun to observe and appreciate my world more closely a few years earlier, after meeting Bill in 2007, starting a blog and delving into photography with his encouragement.  Then, when he became seriously ill, the lesson to appreciate every good moment was intensified.  But, as most of us will know, it takes continual reminders to form life habits, and Lilee's example was followed by that of Brooke Ashley Malakoff (November 27, 1994 - October 17, 2015). 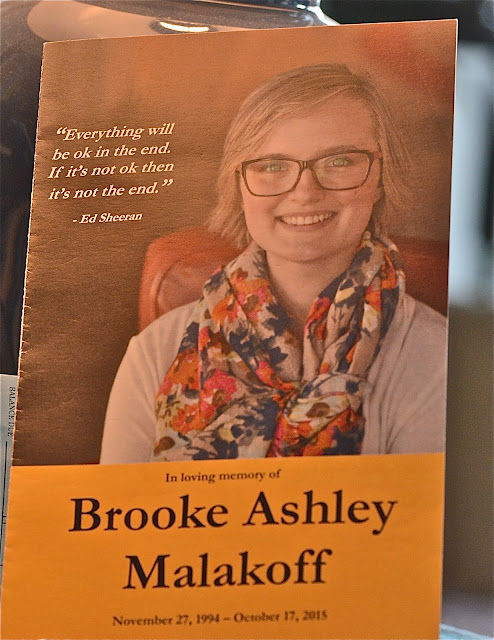 I could write for days about how tragic it is that Brooke and Lilee-Jean and Seanny are no longer with us, but I'm guessing they would think that quite a waste of precious time.  They'd probably tell me to "dance in the rain" or "live my dash" instead of wasting anger on something that, at least until we figure out how to clean up our world and/or have a research break-through, will continue to take a high toll on living beings. So, I'd like instead to celebrate those young lives and their continued influence on mine.  See that orange hat?  Well, Bill suggested I try it on.  We were at Chapters-Indigo Book Store at the corner of Granville and Broadway on a day that might have made us grumpy.  A noisy fire alarm testing process in our building terrified Black Jack and made it necessary to stay out of the  building for most of the day.  We needed to find some way to pass the hours outdoors while still finding a few warm, dog-friendly places to rest from time to time.  Book stores are not what they used to be.  Mugs, CD's, clothing..  just about every product you could imagine, including that orange hat, were on display alongside the books.  Black Jack was warmly welcomed and there were cozy reading corners set up that encouraged people to settle in for a nice read, so we selected Chris Hadfield's An Astronaut's guide to Life on Earth  and spent a most enjoyable half hour reading aloud to each other.  We liked the book so much, we ordered a copy for our Kindle, and finished it during our evening read-aloud-to-each-other times.  And yes, I tried on the hat, eliciting laughter and the realization that a day we had been dreading was actually now a happy adventure. 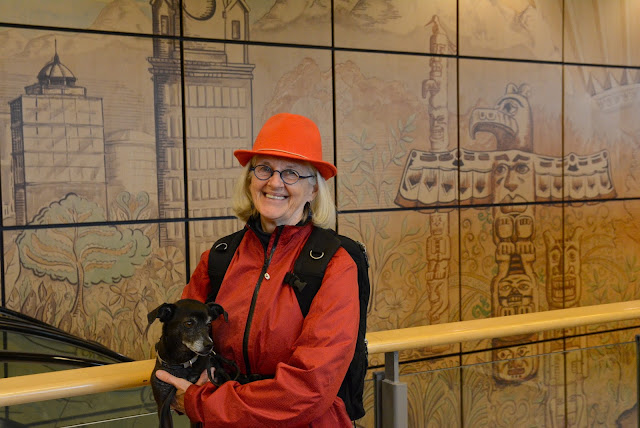 Looking at that hat now reminds me of these captures of Lilee-Jean.  She surely knew how to appreciate a happy hat and an opportunity to laugh.  As you can see, I still have more to learn from her to really get that laughter right :) 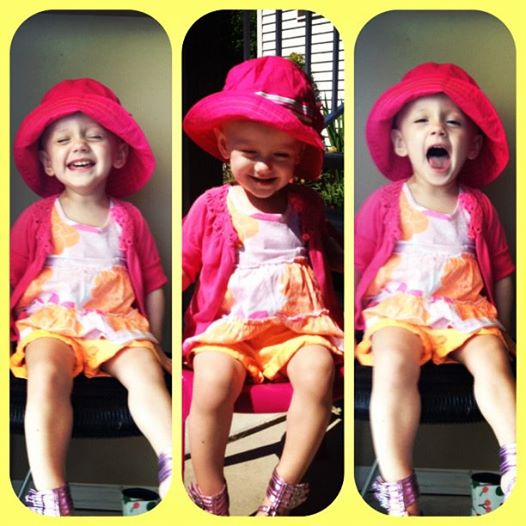 For those closest to Brooke and Lily, the ones who can barely breathe in a world without their physical presence, I worry about the hypocrisy of claiming to have learned from them.  In fact, I was only in Lily's presence once, Seanny's once (while he was sleeping) and Brooke's twice.  But, perhaps that will give you some idea of the strength of their personalities and message.  And, full disclosure.  Although I vow never to have a negative thought again, they do still creep into my head space sometimes, and there are still days when the weather is a little too cold or too rainy and I find myself whining inwardly.  But those negative thoughts are banished more and more quickly, and when I'm tempted to whine about the weather, I remember how lucky I am to be able to be out and about in any weather.  Sometimes, I think even their loved ones may not fully understand the vast distance these children's spirits continue to travel.  They make their way across continents and across time, passing from one generation to the next, even via people like me, who could never claim to have known them.  I fully believe those spirits are making, and will continue to make, the world a better place.  I think of Brooke and Lilee-Jean and Seanny whenever a small moment makes me happy, because that is a part of what I learned from them - to appreciate the small stuff.  I think of them when I see a rainbow (though for me, rainbows are big stuff), as I did on October 10th, four days before Brooke was admitted to hospital for the last time. It was hard to believe her treatment had been palliative for about a year; she drew smiles and laughter from those around her wherever she went and whatever she did. 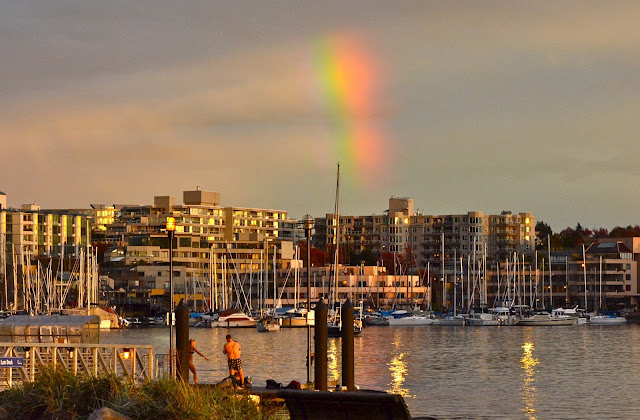 Perhaps you've heard of The Dash, a poem by Linda Ellis.  I hadn't. 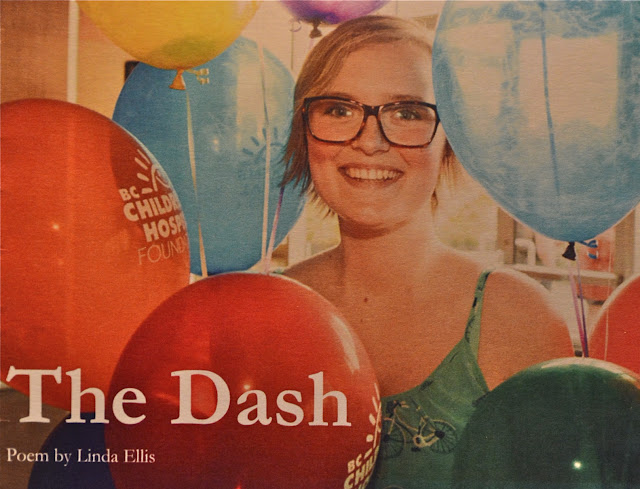 Its message inspired Brooke and so she shared it with her friend, Carmen, who shared it on Facebook.  It was printed on Brooke's "Celebration of Life" program as shown below. 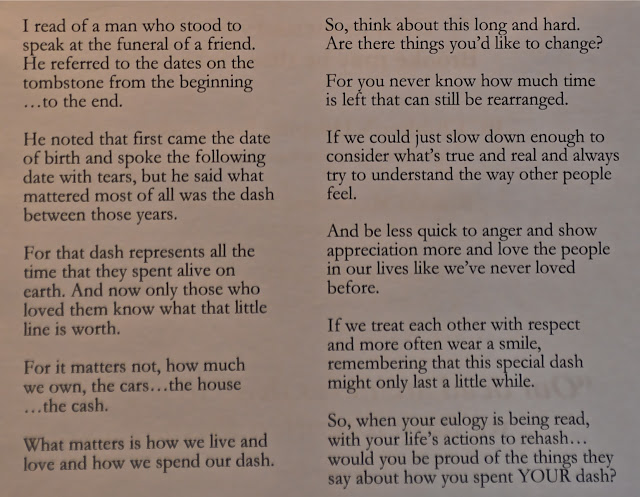 I caught snapshots of Brooke twice when she emceed the BC "Gold Ribbon" Childhood Cancer awareness events in September 2014 and September 2015.  In the picture below, taken less than a month before she died, Brooke (in the blue jacket) hugged her dear friends and fellow oncology patients, Carmen and Danielle, after they sang a great rendition of "Fight Song" by Rachel Platton. 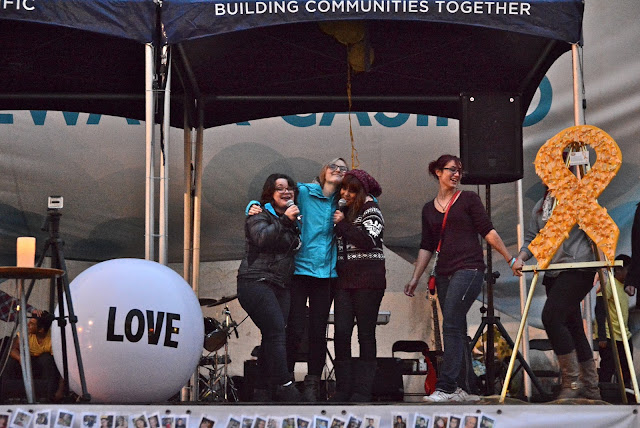 Carmen not only sings but also composes.  She wrote this song for Brooke and posted it on Facebook with these words: "For my angel Brooke, i wrote you a short little song because it was really hard to find the words and music to express how truly beautiful you were but I know you are at peace now. Thank you for teaching me so much, and never failing to be the best sidekick of all time."  It's a beautiful song.  Here's the link one more time.  I've listened to it many times.  I love it.  It reaches my heart over and over, reminding me of the terrible loss of potential when children die, and of the pain inflicted when cancer survivors witness the death of friends met during their illness.  And yes.  It reminds me to "live my dash" while I can. 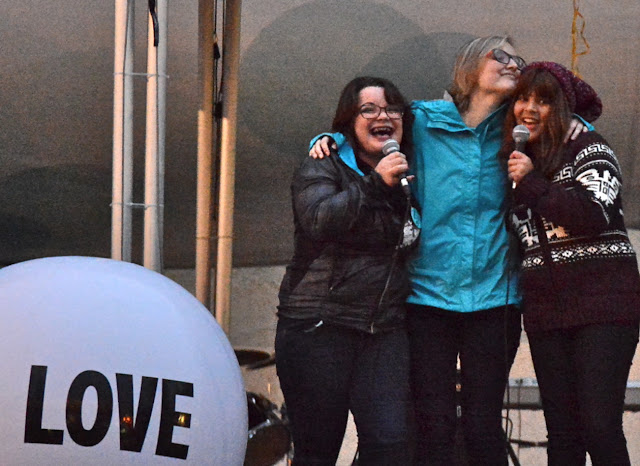 I don't know who took the photos printed in Brooke's "Celebration of Life" program but the photographer did a wonderful job of capturing the sparkle in her eyes and the sheer joy in her smile. 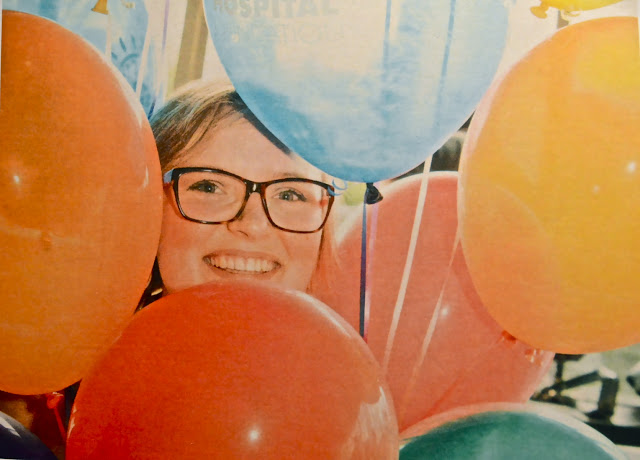 It was Lilee-Jean who led me to Brooke.  Remember the beautiful voice I mentioned at the beginning of the post?  Well, it belonged to Lilee's father, Andrew, and I followed it like a child lured by the Pied Piper, though I was some distance away.  In fact, I was ready to board the aquabus for home, but couldn't draw myself away from the music.  When I found him, I sat on a bench for a while, soaking up the gentle lyrics, sweet melodies and velvety-textured voice.  Later, hoping to find more of his singing on line, I learned instead of the battle he and Lilee's mother, Chelsea, were waging for their daughter. I began to read Chelsea's blog and finally attended a picnic given by Lilee's family to offer followers a chance to meet her.  Her grandmother, Mary, was there and we became friends.  I learned that Mary doesn't take friendship lightly.  We lived an hour's drive apart and Bill, recovering from his own cancer treatments, no longer had a vehicle!  Mary took it upon herself to contact me whenever she could.  She traveled to Vancouver often, usually to visit and comfort children and parents met during Lilee-Jean's treatments.  Sometimes, she was able to  meet for coffee and a chat and little by little, we came to know each other better.  However, when she invited me to my first childhood cancer awareness event, I didn't jump at the opportunity.  It seemed too sad to learn about more kids facing such a horrible disease.  No, I wasn't keen, but it was an opportunity to spend some time with Mary, so Bill and I went.  And yes, I found it sad, but I also witnessed a camaraderie and playfulness that was unexpected.  An already cruel disease was sentence enough; these kids and their families were not about to let cancer also steal their ability to laugh and love. It was great to spend time with Mary.. 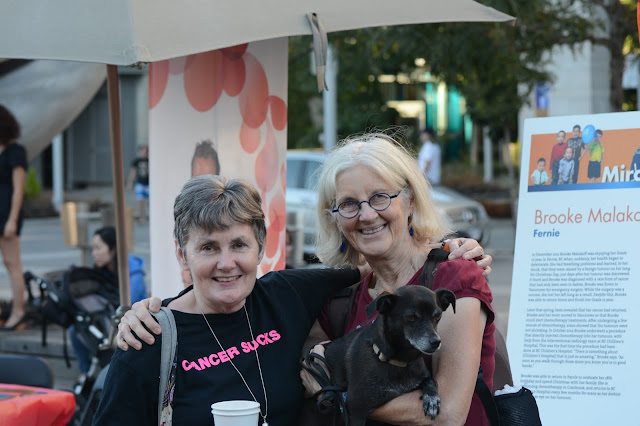