A few critters and some thoughts about Juvanescence

I missed the "H" and "I" posts for ABC Wednesday's meme but it looks like I Just might make it into the "J" post  Since I have lots of critters to share, I hope I can Justify posting to Eileen's Saturday's Critters meme as well. Many thanks to the administrators of each of these memes.  Their Job of Joining up bloggers from around the world is one they do with Joyful committment.

We hear this Flicker most days long before we spot him.  On this day, his call was so loud, there was no question he was nearby.  But where?  After much searching, I was Jubilant to catch him as he peeked up over the street lamp. 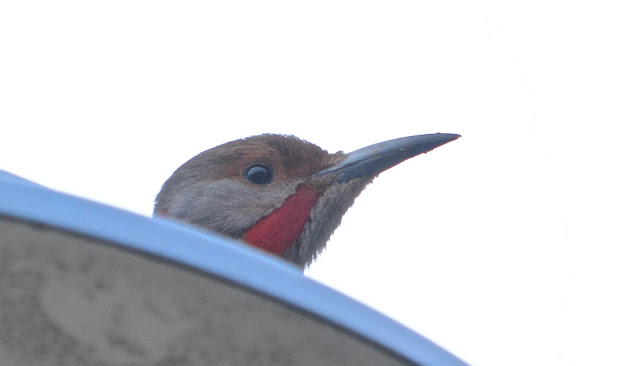 When he wasn't "kyeering" and "rolling-rattling", he was drumming on the lamp edge for maximum effect. (You can hear examples of his calls and his drumming technique by scrolling down a bit at this site),  No females responded. Perhaps, he was a Juvenile and needed more practice. :) 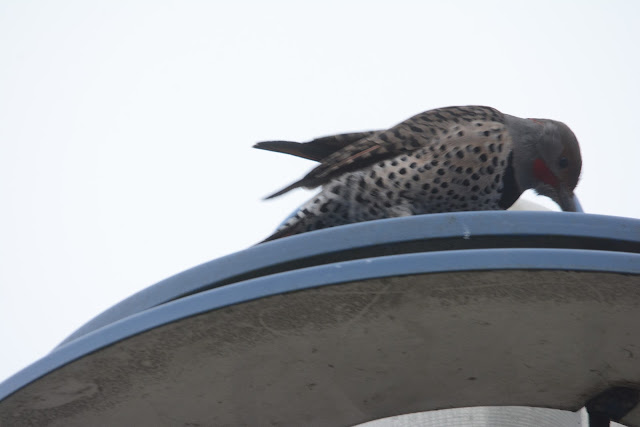 Suddenly, he stopped his work and stared into the sky, perhaps wary that an interloper might take over his Jurisdiction. 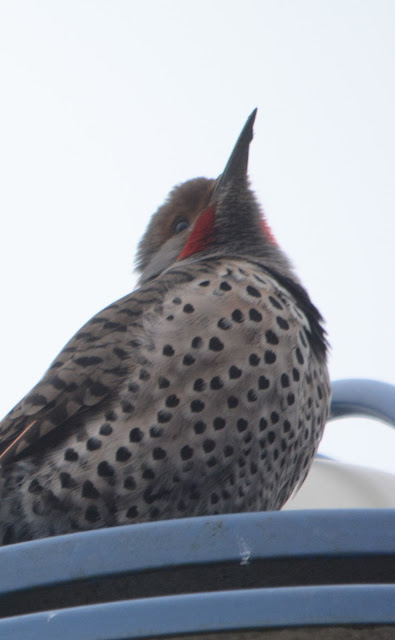 Before hiding again, he glanced at me, his Jaunty, red "moustache" looking positively dapper. 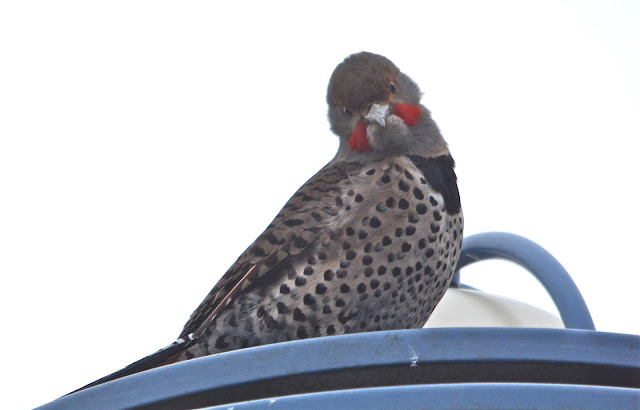 We saw this adorable little fellow in Olympic Village Park during one of our Jaunts about town. I learned that he is nine years of age but  he plopped himself down with a slightly Jaded air.  Perhaps, he was feeling impatient at having to wait for our conversation to end so that he could get on with his day. 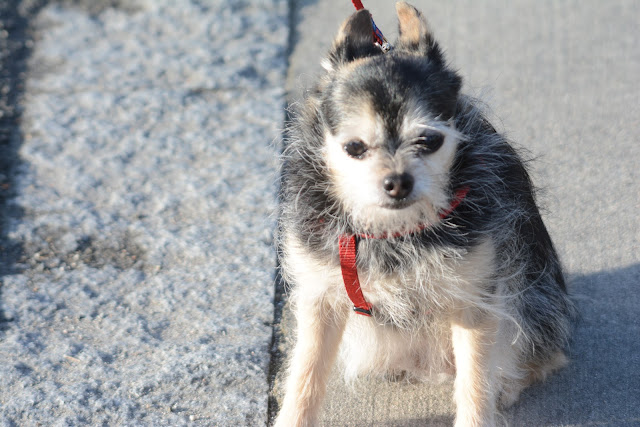 12-and-a-half-year-old Black Jack has a heart murmur and some other age-related issues but she continues to show a Juvenescent attitude. 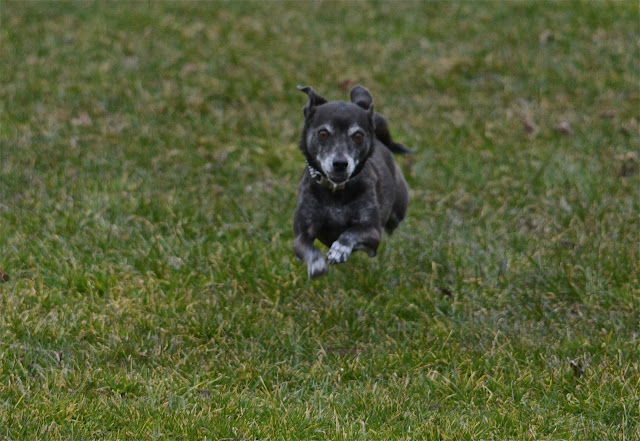 Perhaps, that is because playing and Joking with Bill.. 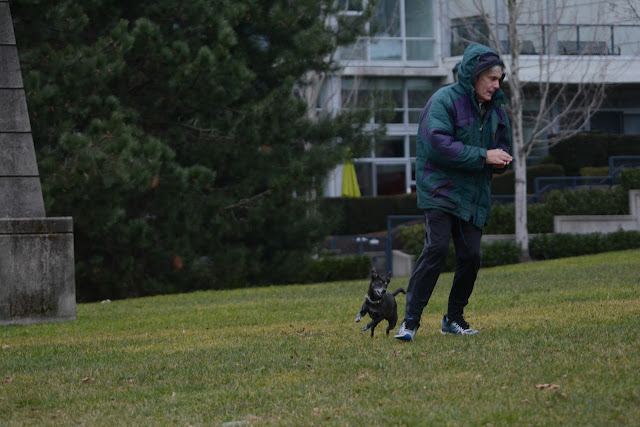 keeps them both nimble and full of Jollity. 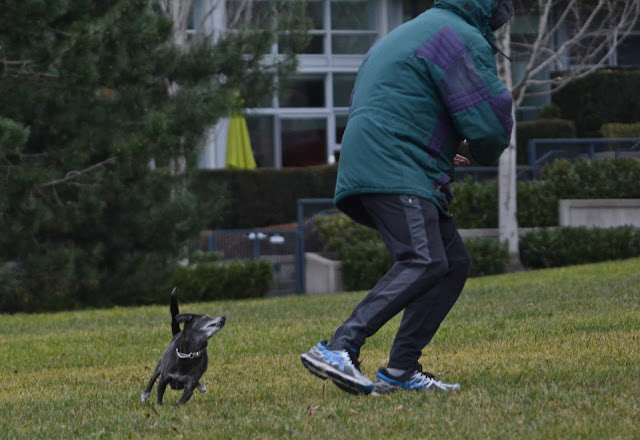 Once invigorated by play, Black Jack looks like a Junior half her age. 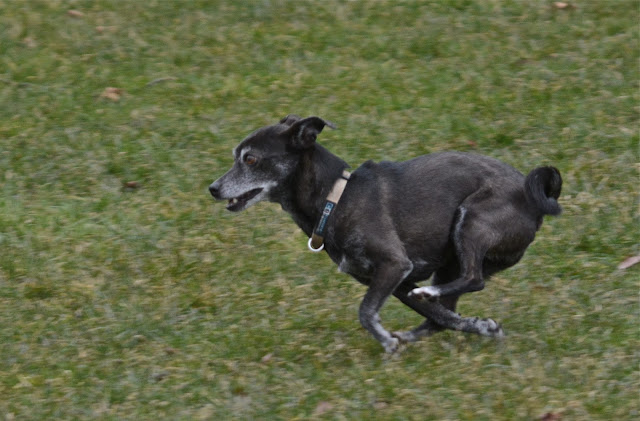 This dog, encountered as we walked along a Yaletown street, displayed a Jazzy sparkle that was in contrast to.. 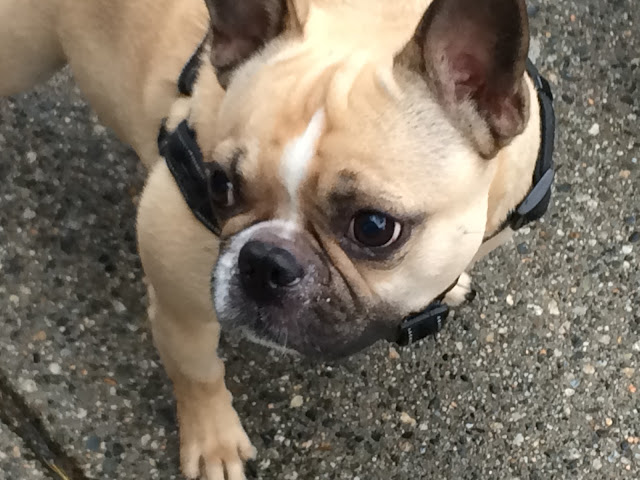 the slightly Jittery attitude of this cute little one. 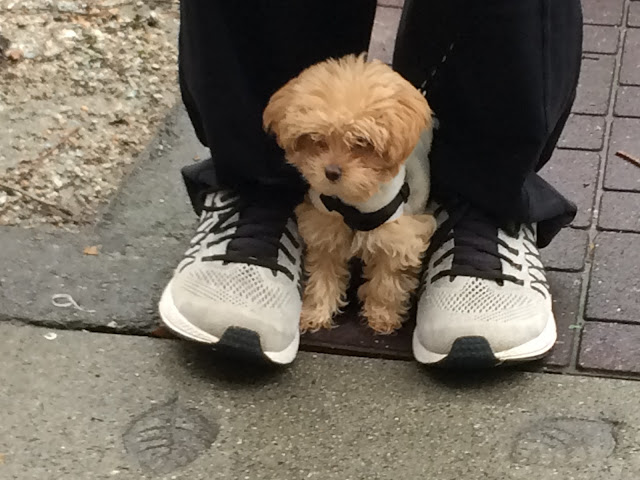 I liked the way his human smiled, aware in a Joshing sort of way of the impression the two of them made as people stopped to admire the little one. 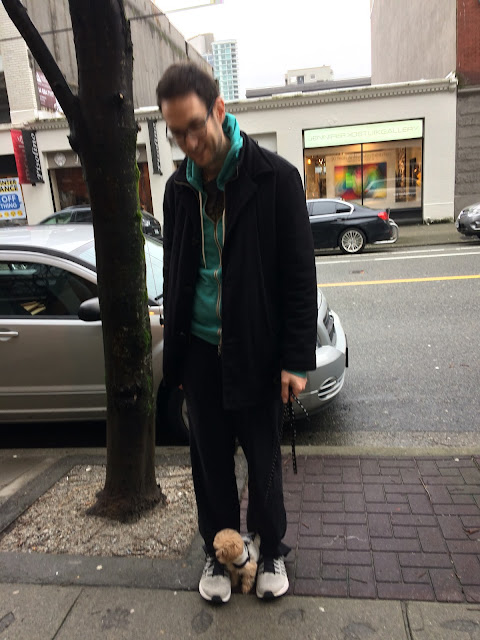 Though the weather has Joggled and.. 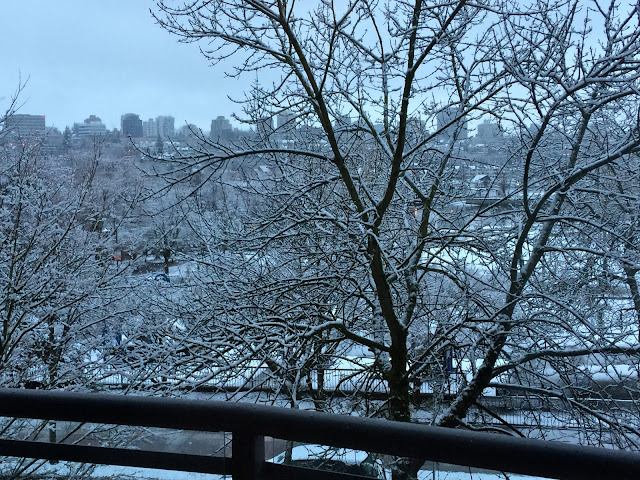 Jiggled back and forth between sun, snow and rain, sometimes within just hours, 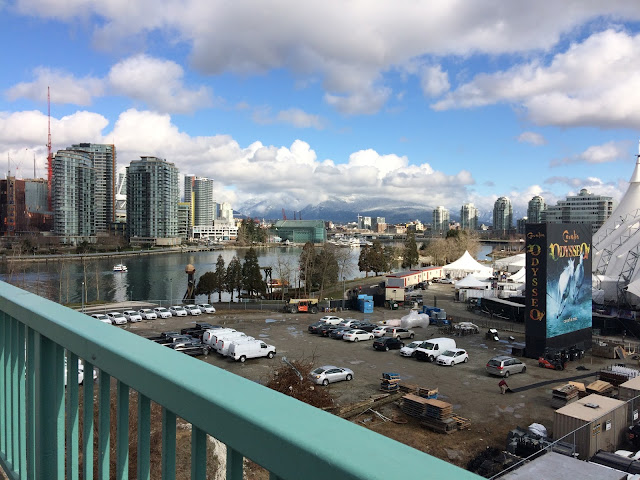 stopping to take a moment to recognize that fun can be had on even.. 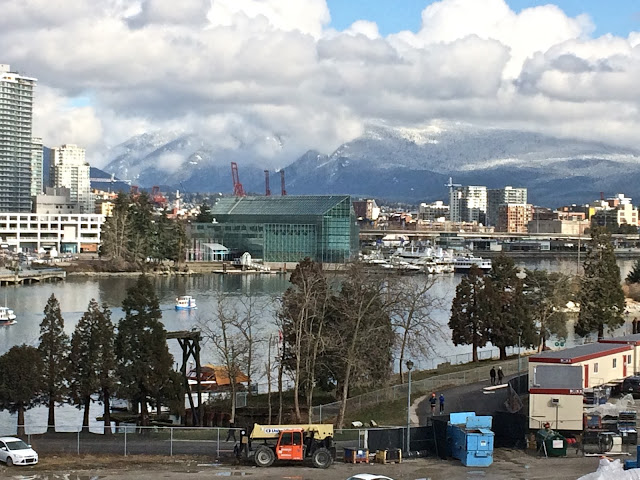 the more miserable days brings Joy to our life.  In the picture below, Bill and I played pickleball in the pouring rain.  We put a garbage bag under Black Jack, with her bed on top of it, a towel on top of the bed, and created a tent over her with a space blanket and Bill's down Jacket. 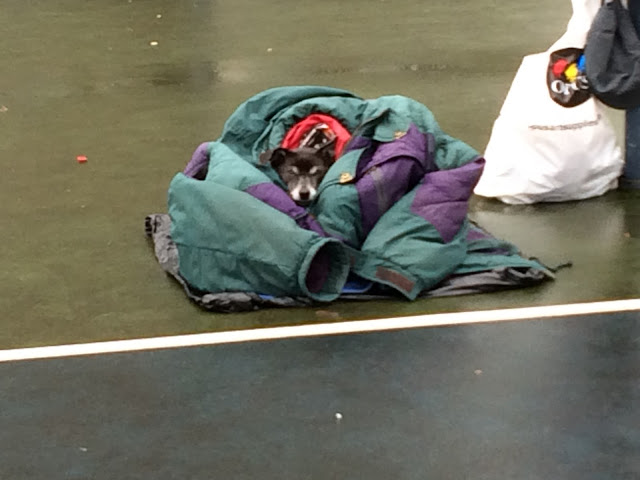 As we played, we noticed the wet court created its own shadow-reflections that were fun to photograph.  We Jested that there was something reassuring about knowing we weren't wimps. :) 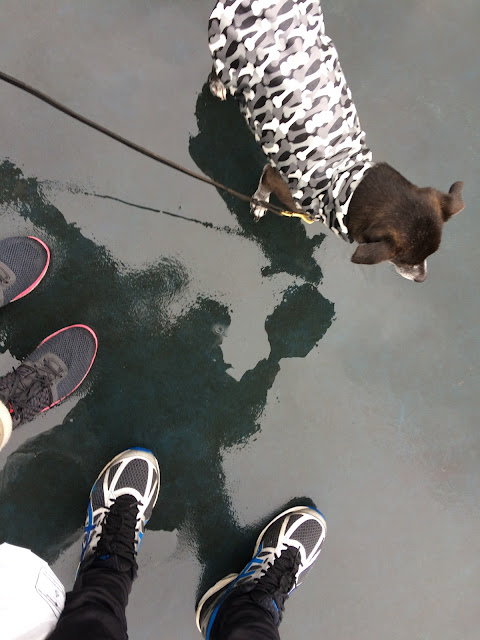 As we walked home from our favourite café later that day, we were amazed to see some pink in the sky after a day that had contained hours and hours of rain. 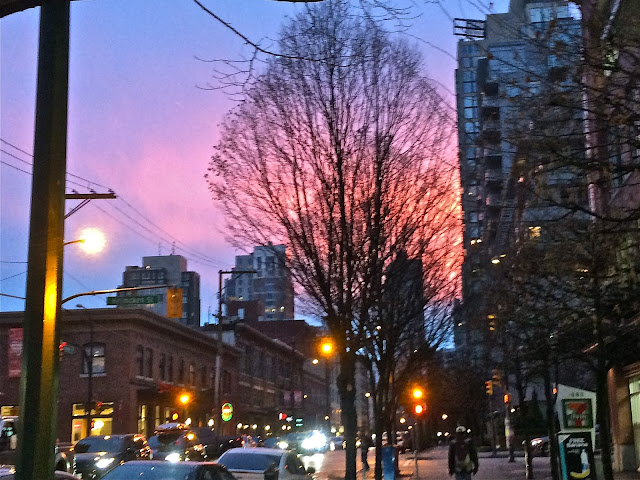 Learning new skills is another way to preserve the Jollity and fun in life.  My attempt to learn to draw took quite a Jump forward with this copy of a drawing.. 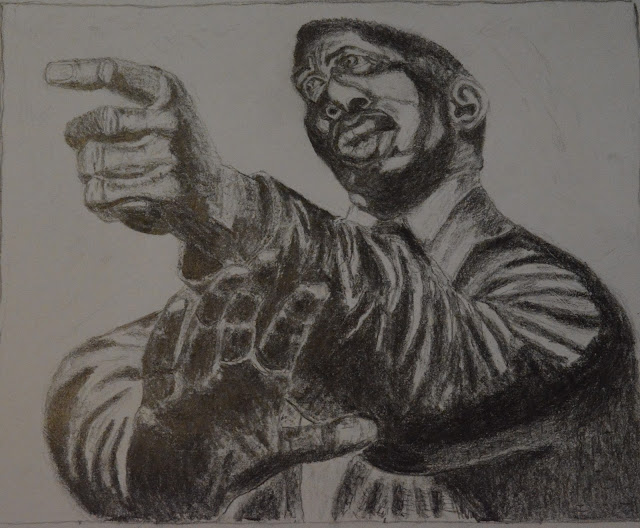 by Charles White.  I didn't get the lips and Jaw quite right, so my "preacher" has a slightly different expression than the original, but overall, I am encouraged to see more progress than I expected to make after only a couple of months. 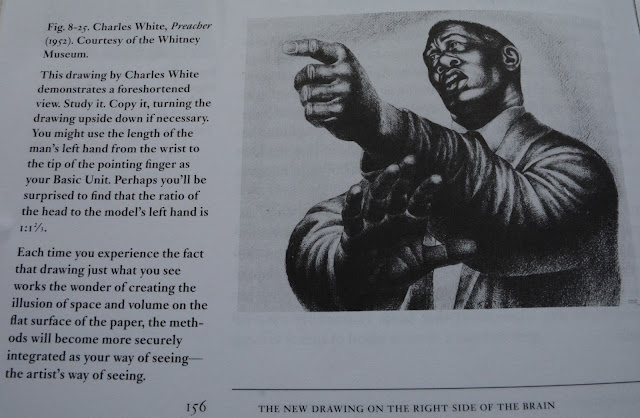 All around us, as Bill and I ride our bikes and walk together, we see that hitting the Jackpot is not so much about.. 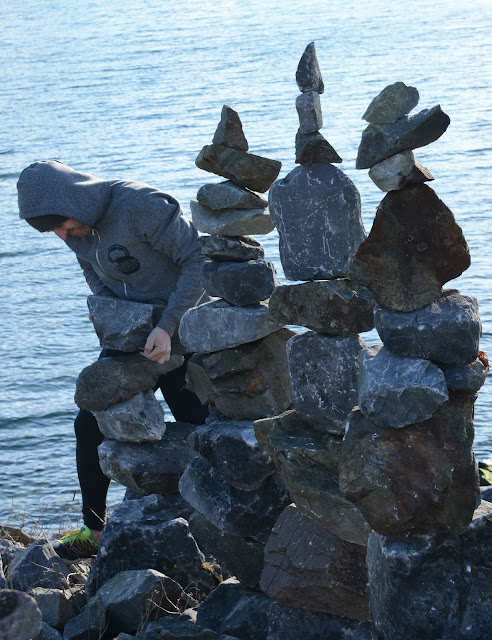 winning the lotto as it is about doing what we love.. 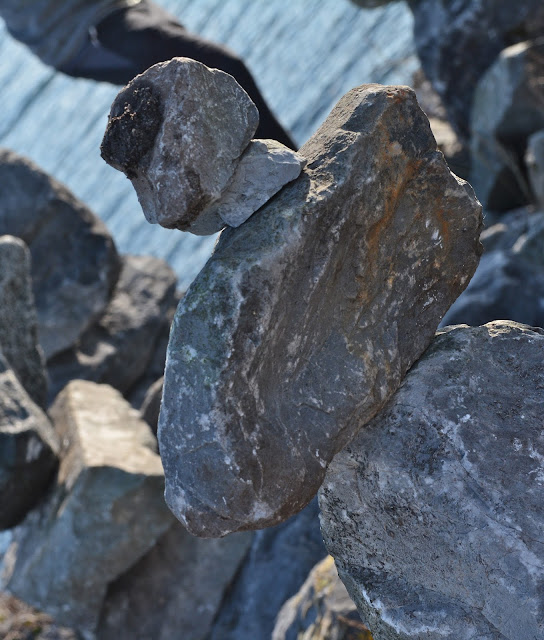 and seeing the humour.. 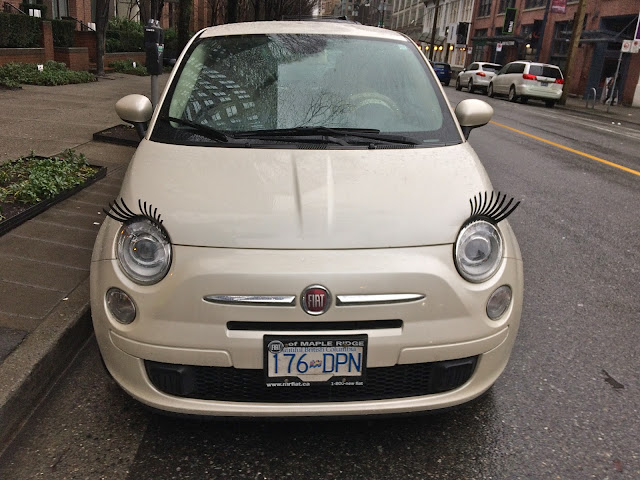 and colour in our world. 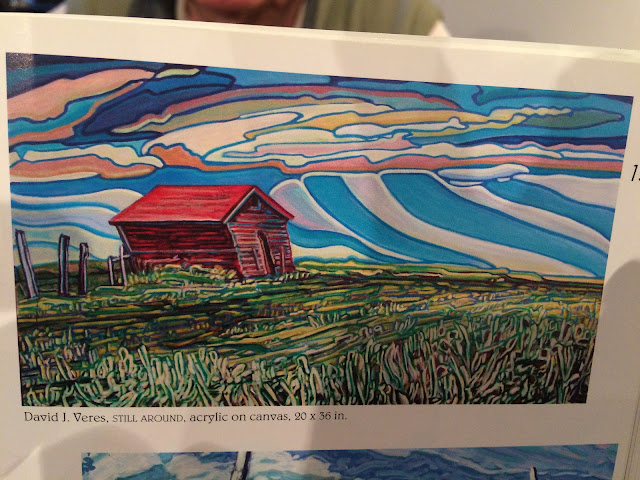 There are Jewels to discover in our surroundings. 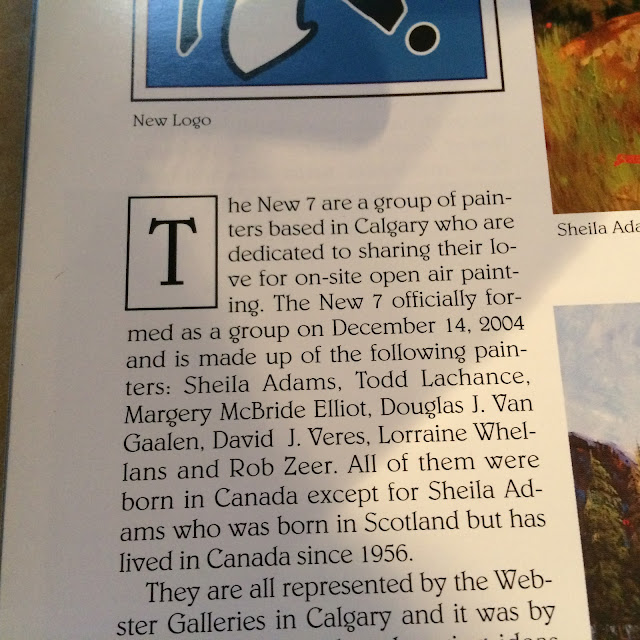 and in the people and pets we love.. 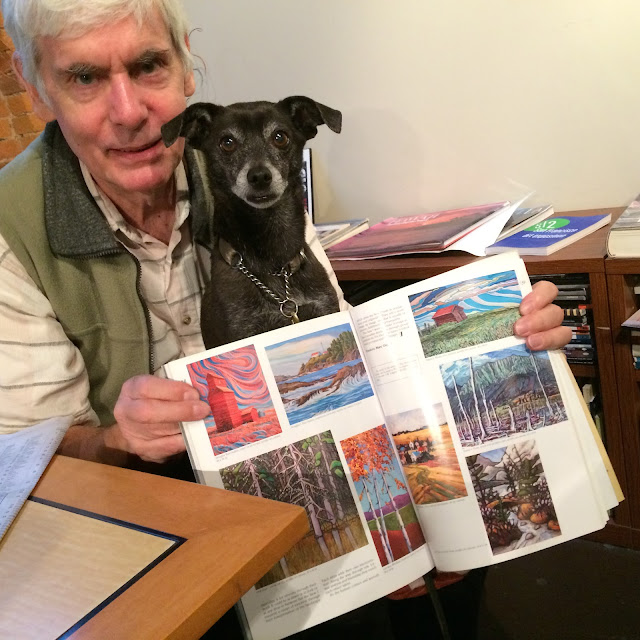 that will keep us Jumping.. 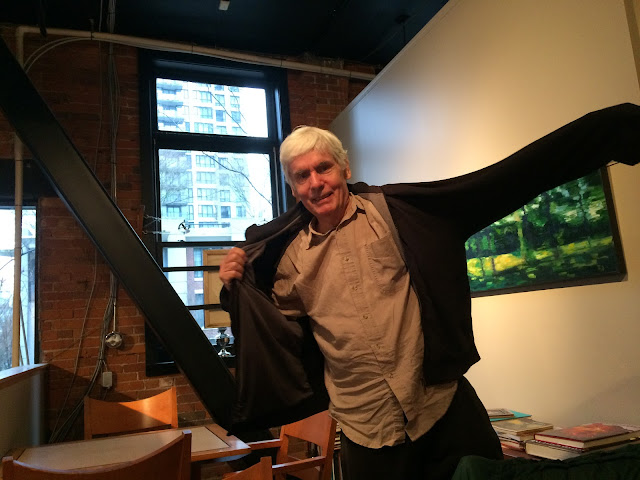 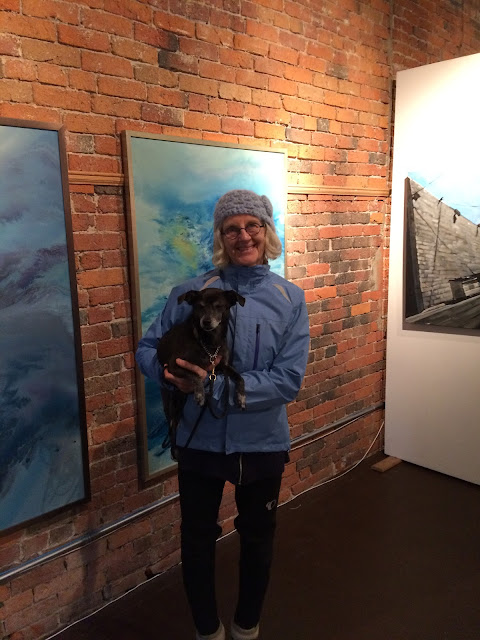 Don't believe me?  Sure you do!  Just ask Black Jack if you have any doubts. 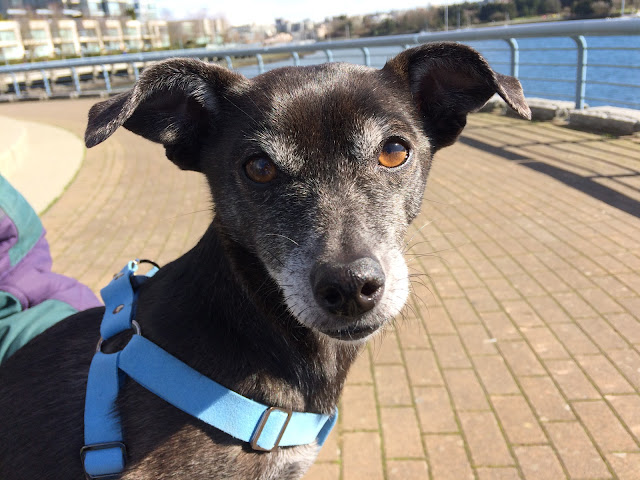 No Jesting about that, nor about the heartfelt thanks I extend for stopping by!!
Posted by Black Jack's Carol at 1:33 PM