Holiday time, this summer, has been entirely different from last year. This morning, I took a look at a few of my posts for August 2009 and there were 20 of them(!), mostly about the osprey chick, Rose. I biked almost every day to the lookout, and was as happy as could be, with not the least desire to travel elsewhere, when there was so much excitement right at (well, almost right at) my doorstep.
August 2010 has been fun as well. There have been lots of walks and talks with Bill and Black Jack, and a most enjoyable three-day trip to Victoria to visit Bill's sister, Phyllis, and her husband, Barrie, at their new home. There has been lots of time out of doors with the camera and there are many stories just waiting to be told. But, I have visited the osprey site only twice, and for some reason, sitting down to do posts has taken second place to falling fast asleep as soon as there is some indoor time.
But, a couple of things spur me on to post today. One is to do with Turtle Gardens, an amazing dog rescue in Topley, a northern BC community. That rescue is the only one for 17 First Nation communities and 11 villages and towns spread out over 250 miles between Prince George and Terrace. Yvette, the founder of the rescue, works with support from her family to be on call 24-7 to save hundreds of dogs (I think that may actually be thousands, but I'll play it safe) that have been abandoned and/or abused. Yvette is linked at the side of my blog. I have been reading her daily stories for about three years now, and my admiration just continues to grow for the work she does. It was this post that really touched my heart recently. One of the dogs Yvette has in rescue has a condition called megaesophagus and a special chair is needed. You can see a little video at that link of another dog with the same condition, doing well because of that chair. For now, with no funds to get the chair, and no time to build one, Yvette is holding the dog upright while he eats and for some time afterwards. Yvette herself has suffered from ill health recently, and although she is much improved with the aid of oxygen to help her breathe, I worry for the constant stress she is under to find funds to keep the rescue going. You may have noticed that a new link is at the top right of my blog. That purple icon takes you to the Shelter Challenge site. Bill created the link for me, and he has added some instructions that you can read if you hover the mouse over the icon. He says the first time you vote, it is not really intuitive, but I will add that after voting once, it gets much easier. The next time you go to the site, you simply have to click on vote and type in the name of the animal picture. If you choose Turtle Gardens as your rescue, that could be one very easy and cost-free way of helping their vital operation. They are currently in 4th place. (After you vote, scroll to the bottom of the page and click on Canada to see the standings.) With more votes, they could hit 3rd place position, and the top three shelters each receive a prize of $1000. As I said, it doesn't cost a thing except a little of your time. I've been voting each day, and have watched them climb from 6th place to 4th. They're so close!
I spoke about OWL, the second rescue on my mind, in this post about the Jericho eagle nest falling to the ground. Way back on the 23rd of July, Bill, Black Jack (who understandably had to wait in the truck) and I went to Delta to visit the place where the younger eaglet was taken. We were not able to see her, but were told that she is huge, and doing really well. They were expecting to be able to release her back to her home area very soon. They explained that most likely, her parents will drive her away, but that is as it would be naturally, once the chicks are fully fledged. While we were there, we met Sarah, the barn owl, in the front office. You can read her story here. OWL has a schoolhouse and an excellent educational program. Sarah and some of the other birds that cannot be rehabilitated live permanently at OWL and contribute a great deal as they share their stories. Twice a year, OWL holds an open house, and this is the only time the public can tour almost all of the property, including the hospital and the flight-training barns. I'm not sure when the next open house is, but it is well worth taking the virtual tour. I was told that a generous donation at the last minute has kept OWL open, but like most rescues, fund raising is a constant priority.
Sarah 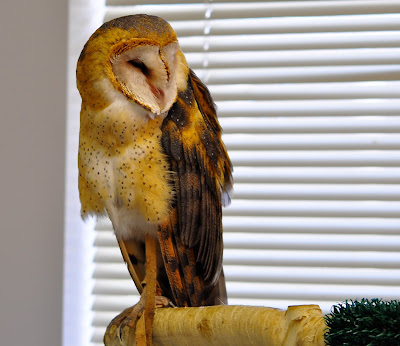 Here are a few photos that we took in the Delta area the same day we visited OWL. This one was taken just across the road from the place where we enjoyed lunch. It was interesting to me that the grass is refreshed each time the tide comes in. Here, it appears to be growing on top of the logs. 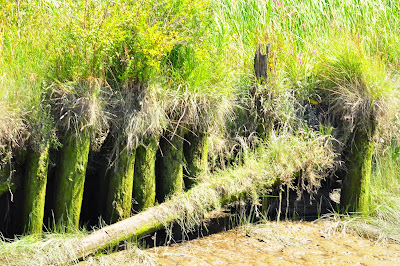 I always love yellow birds. Bill spotted this one as we ate lunch. I'm thinking it might be an American Goldfinch, but please correct me if I'm mistaken. 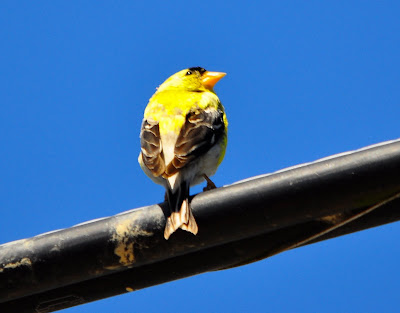 We enjoyed our lunch, but weren't permitted to bring Black Jack onto the patio. Bill, ever inventive, had the idea to take a couple of chairs that were sitting in the alley behind the restaurant. We placed them under a tree across the road, and then returned them later. Black Jack definitely approved, and so did I! 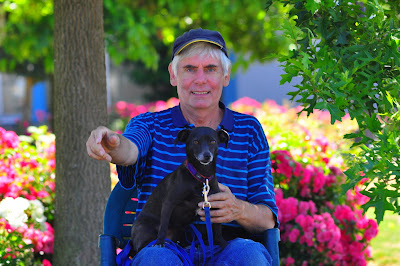 I forget exactly where this was, but it was during a short stop to check out birds before we arrived at OWL. I couldn't seem to get many shots of birds, but all kinds of insects presented themselves. I identified this Eastern Tiger Swallowtail, using a National Audubon book that Shiprock kindly gave to me last summer. Our paths haven't crossed this summer but Shiprock continues to take absolutely stunning photographs. My big revelation in seeing this butterfly was finally understanding why that beautiful plant is called a Butterfly Plant. 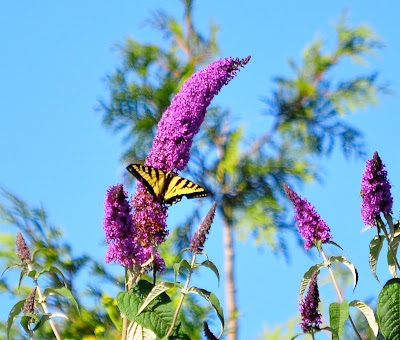 I used the same book to identify the next two insects, but again, corrections are very much appreciated. Could this be a Pallid-winged Grasshopper? Isn't the camouflage amazing? 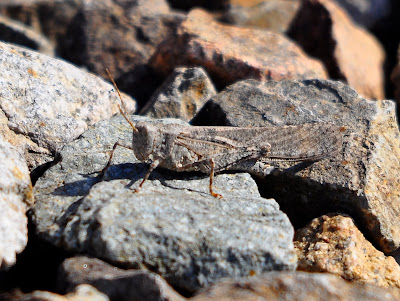 I'm thinking this butterfly might be a Least Skipper. 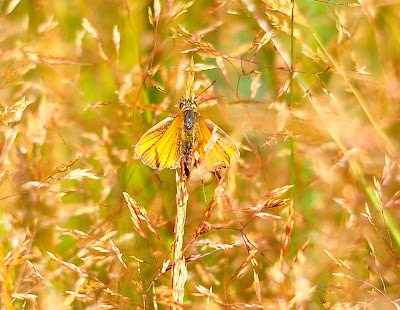 I think this might be one of my better eagle shots. There were lots of juveniles as well. Delta is a great place for eagle sightings. 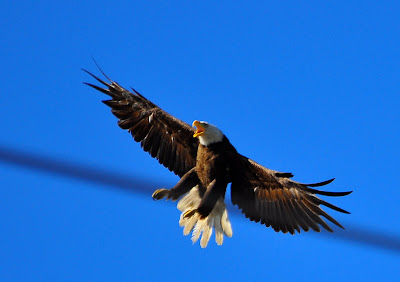 My last photo for this post is of a frog (toad?) at Jericho. Bill and I walked there that same day, in the evening after supper. We always hear them, but it is only once in a while that we are lucky enough to spot one. 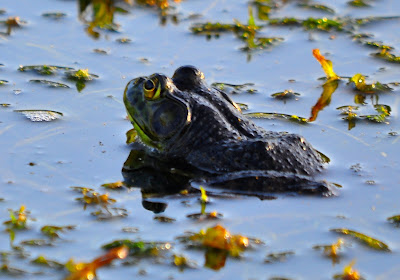 I have many photographs and stories to post, including an osprey update, and one about a couple of young boys who really impressed me with their kindness, as they poured their drinking water on some starfish at low tide. Hopefully, now that I'm on the blogging wagon again, it won't be quite such a long time before the next post. As always, thank you for taking time to read about my adventures.
Posted by Black Jack's Carol at 3:00 PM