I have been watching two eagle nests, one near Jericho Park and the other in Vanier Park. Each pair of eagles has two chicks.
Jericho Eagles
All was well with the Jericho family until about a week and a half ago, when the nest more or less fell apart. I didn't witness this, but arrived about four days later, to be told the story by Michelle (check out her incredible photography) and by several others who have been following this pair (named Bert and Ethel by some) for about ten years. One of the chicks was just at the fledging stage, and after a few very difficult days (chronicled by Michelle), is now doing quite well. The other chick was rescued and taken to OWL. My respect and admiration for the people who run this facility (and for those who keep watch and try their best to step in when needed) just continues to grow. The eagle chick was kept in intensive care for several days. I have heard that it is doing well, and will hopefully be returned to the area in a couple of months.
This most recent picture was taken last evening. In spite of a very noisy folk festival, with booming bass speakers that fill every available space for several blocks around the park, the chick was thinking only about its next meal. I watched the parent fly in with an unfortunate crow in its talons, but my camera was still in its case. By the time I got the camera out, the parent was busy preparing the meal for the chick to consume.
Feed me now! 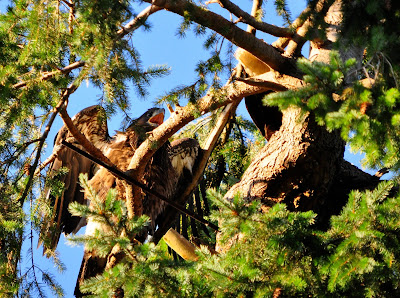 What's taking you so long? 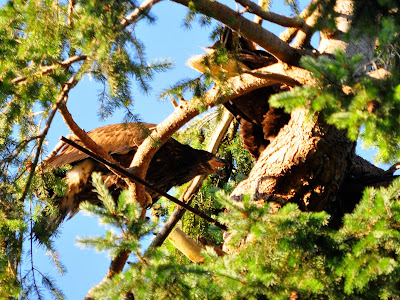 Give me a break. I'm working as fast as I can. 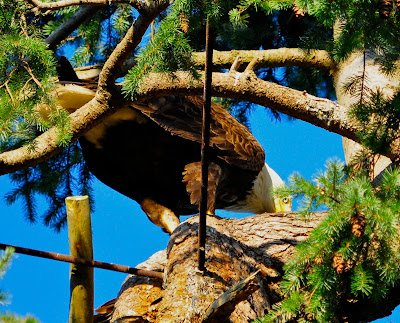 I can never watch such a scene without feeling sorry for the prey. Here, the parent crow (I think) tries desperately to save its baby. It continues to wail and fly at the eagles for a very long time - long after I feel sure the situation is hopeless for the juvenile crow. 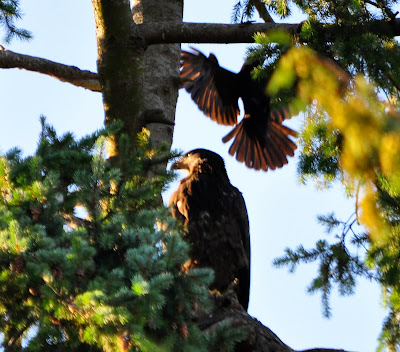 These pictures were taken a few days earlier. All of us were impressed with how well the chick was flying. Although it occasionally appeared to be tangled up in the branches, for the most part, it flew successfully from tree to tree. 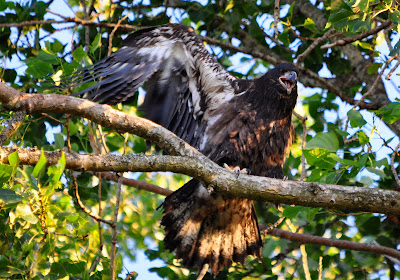 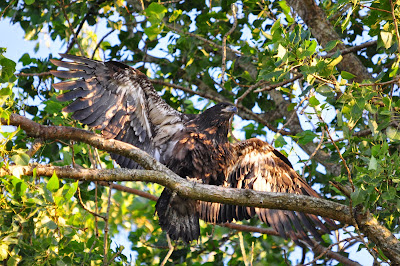 The problem was that, without the nest, it was difficult to find a place where both the parent and the chick could perch, and where there was room to hold the prey underfoot, and tear pieces off to give to the chick. Although the eaglet cried piteously, this was not an appropriate spot. 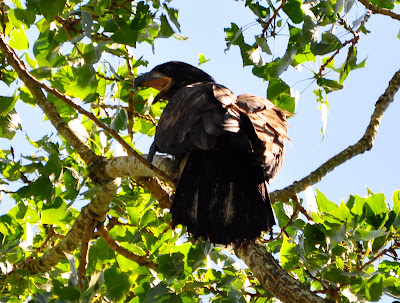 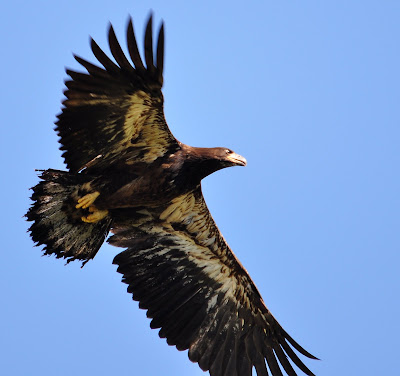 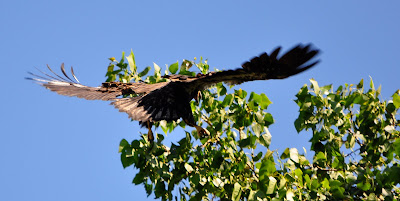 while the parent waited patiently from what s/he considered to be a better landing place. 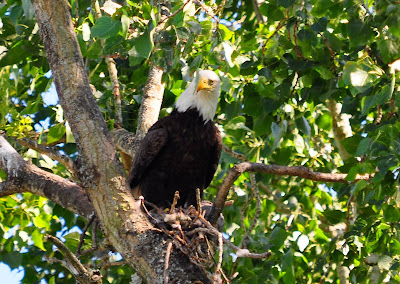 Tantalizing the chick by pretending to eat the meal herself (at least, that is how I interpreted her actions), 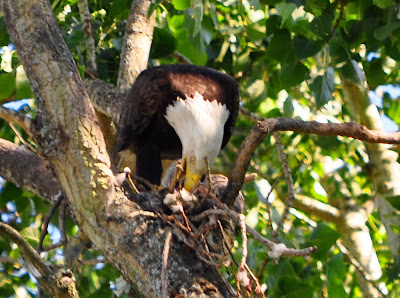 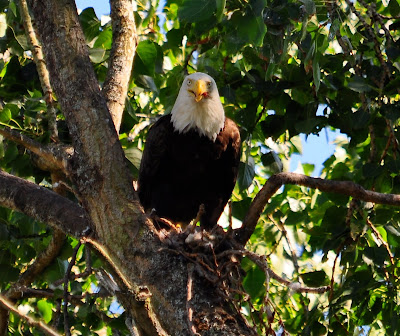 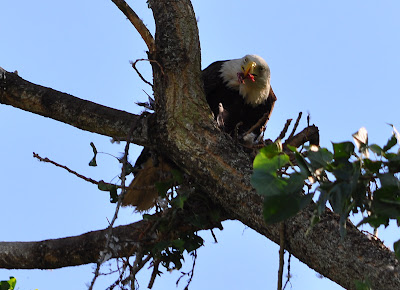 worked really well to get the chick to finally land in the selected tree, and then, 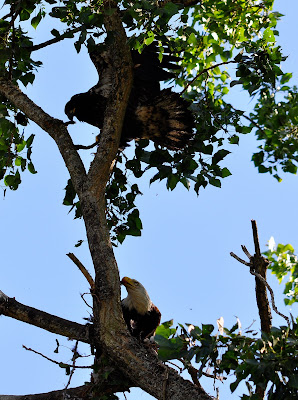 to maneuver to a spot beside the parent. 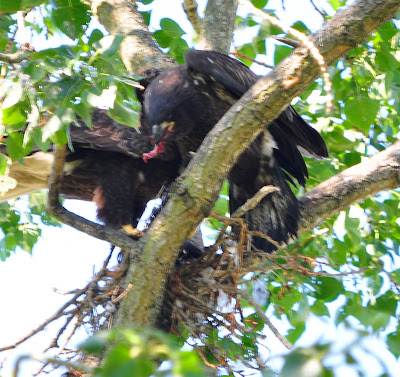 Sometimes, bits dropped to the ground (to the eaglet's horror), a problem that would not happen if there were a nest. 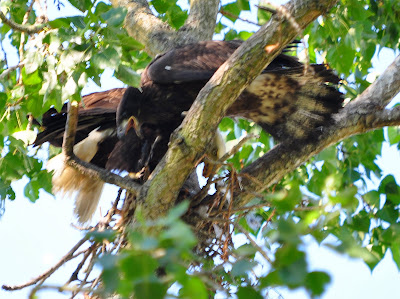 Overall, it seems the news is good for this eagle family. The only hope is that they may return next year to their previous nest, which is in a much more stable tree. Their present tree, possibly in combination with weak nest-building skills, has twice failed them.
Vanier Eagles
We checked on the Vanier eagles one week ago, and it appeared the chicks had been flying for just a day or two. One person told us he had seen the two chicks on the ground the day before. One parent sat quietly on a branch, watching the eaglets explore the area. 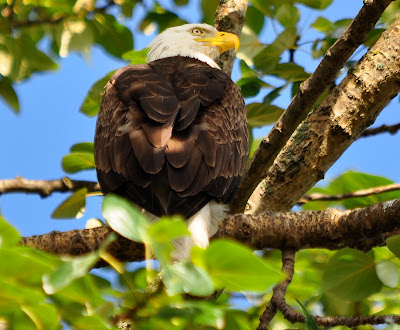 I don't know these chicks well enough at all to tell them apart, but to my eyes, they are doing really well. Here are a few of the photos. 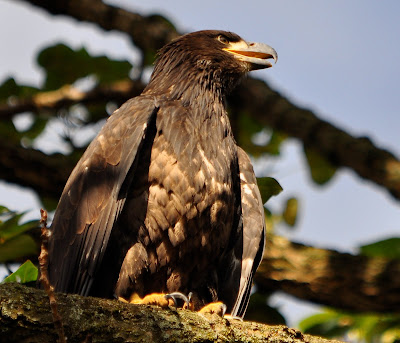 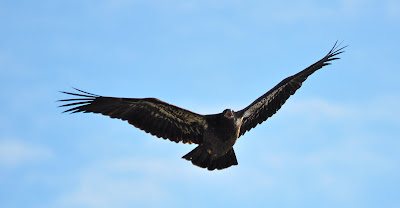 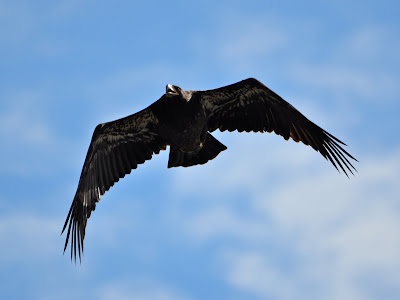 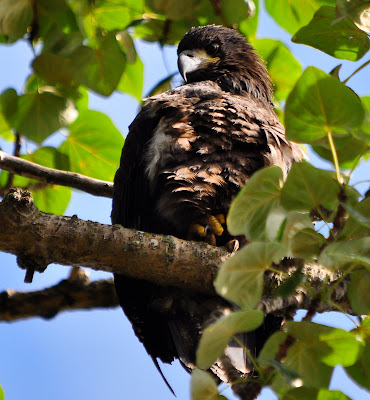 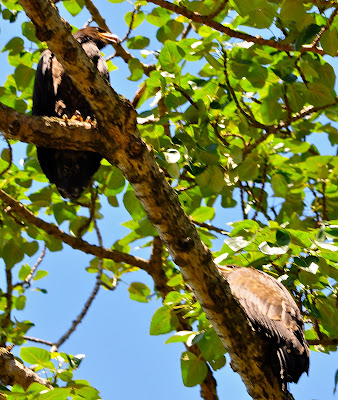 That concludes post number 2 of a rather lengthy catch-up. Everything non-related to ospreys/eagles to follow soon. I hope you are enjoying this beautiful weekend!
Posted by Black Jack's Carol at 12:30 PM