Finally, a December event posted in December. I'm almost caught up!
This post is a very late, but was promised. Any people named in it have given their permission. Sometime in September, there was a message left on my phone at school, calling for performers for a Christmas Market, to run from November 24th until December 24th - a first time ever in Vancouver. This site has a good description of the event, and of the German tradition that inspired it.
A digression:

There is a little video at the bottom of that linked site to the Christmas Market, with an adorable dog and mellow jazz tunes, but I warn any vegetarians that there is a pig on a spit about half way through. Coming across this scene at the market, and then again in the video, were upsetting, even shocking for me, although I tried not to dwell on it.

As I wrote the above, it occurred to me that my desire to understand other cultures faces its greatest challenge in dealing with differences of attitudes to animals. I remember Mali, a friend/colleague who worked and taught in Kenya. She told me one story of someone offering her meat, and although she is mostly vegetarian, and was not keen to taste the meat, she accepted, realizing that the person was honouring her with the offer. I had been considering a trip to Kenya at that time and was stopped in my tracks with that story. I haven't given up on the idea of travel, and of possibly doing volunteer work in my retirement, but I know I couldn't accept meat, no matter how much I want to show respect to my host. I can share a meal with those who are eating meat, but don't ask me to put the meat portion on my plate or in my mouth. And, please don't ask me to look at the face of the animal (or fish, or bird) that has been killed. A dilemma for me. But, I have digressed. Well, perhaps not so much as I think. Perhaps, this is still about making connections. Perhaps, I have further to go in that quest than I realized.

The singers in my Saturday club were keen, and so they prepared a program to be presented on December 3rd. The program included Christmas Carols and popular songs of the season in English, Spanish, Chinese and Russian. Everyone sang the English and Spanish songs, but the Chinese and Russian ones were performed by native speakers of those languages. One of my greatest pleasures was watching the lone Spanish-speaking performer teaching "Mi Burrito Sabanero" to the other members of the group.
Below, Alina, a student from Russia who is studying at my school, explores a little shop before the performance. Alina is a very talented singer, but she has something more than talent. 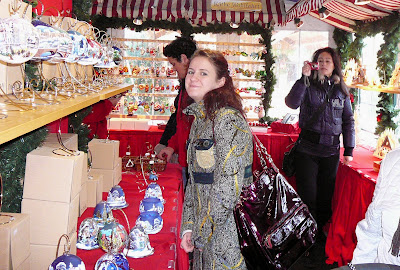 In the next photo, Alina and her also very talented friend, Kamilya, from Kazakhstan, talk with a Russian woman and her child. The father was also there (not in the photo), and the family was so taken with Alina and Kamilya's performance of a Russian children's song that they struck up a friendship. An understanding of the nature of entertainment spread through the group as I have never seen before in my ten years at this international school. Entertainment is about connecting with people, not about one's own desire to be perfect. In offering one's talent, there is a responsibility to prepare as well as one can, but after that, it is about reaching out to those who listen. It seems to me that when love of your art and communication with your audience are the top priorities, stage fright and nervousness become much less of an issue. I really saw that with this group, not only at the Christmas Market, but the day before as well, when they performed for a very different audience at Harry Purdy Pavilion, an extended care facility of UBC Hospital, and again a week later, when their audience was made up of their peers. 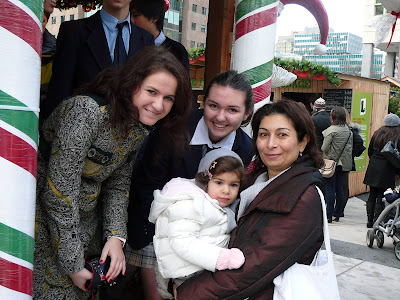 Babes in arms, toddlers, young parents, grandparents - Alina connected with them. At one point, she reached down, extended her hand to a child, helped him onto the stage, and danced with him, all the while singing joyfully. That moment will stay in my mind for a very long time - his shy happiness, his beaming mother, and smiles all around. It was a day to remember. 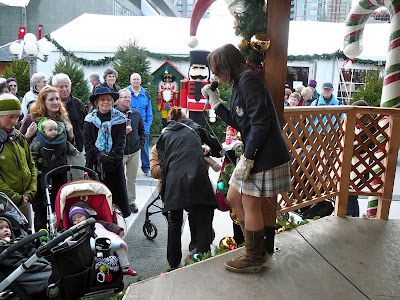 I think I'm on a roll here. Bill, Black Jack and I travelled to Squamish on Saturday, December 4th, for some eagle-watching at Brackendale. That post will hopefully follow soon. Thanks, as always, for reading!
Posted by Black Jack's Carol at 1:06 PM