There's a Part 2 coming for this post, but for now, here's Part 1, broken down as follows: Entertainment, Blooms, Stanley and Stella Update, Jewel and Jonny Update, Lawrence and Olivia Update, and a Canada Goose and Goslings account.

ENTERTAINMENT
We have seen a play, two movies, a car show and a concert since my last post. Snippets from each event drift in an out of my days, sometimes even waking me in the night. I am thankful for the artists who enrich my life with their realized dreams.
BLOOMS


STANLEY AND STELLA UPDATE
My observations of Stanley and Stella seem to indicate a huge change of status in their relationship.  I think the eggs Stella was (perhaps) lying on may not have been viable, and I have a feeling she may have chosen a new Stanley.  Do keep in mind that I stop by most days, but do not stay long, and so my interpretation of their story is made up from a tiny portion of their life.  Here is how I see things, but please do not take my account as the final word. 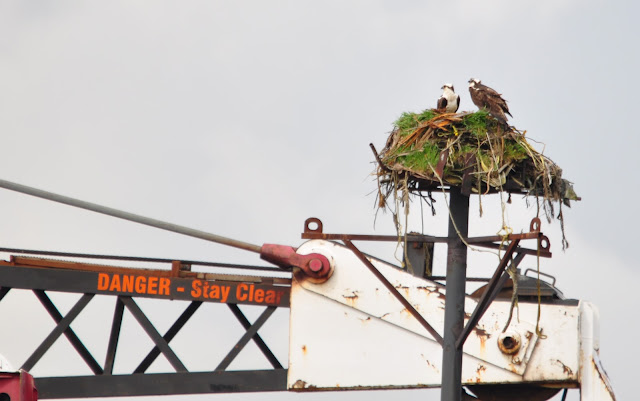 JEWEL AND JONNY UPDATE
Jewel and Jonny appear to be on track.  Their old nest looks as stable as their relationship.

Lawrence and Olivia at first appeared to be setting up housekeeping on their old pylon by the Fell Street lookout, but there was a ten-day gap between these first two pictures taken on May 8th and the ones taken the next time I saw them on the 18th.
CANADA GEESE AND GOSLINGS
Geese and goslings have been hard to miss during the past couple of weeks.  One morning, cycling to school, I counted 27 goslings as I rode by, just in one small area by Lost Lagoon.  Questions came up, as I watched them.  When do they learn to swim?  How old are they when they fledge?  Are the adults monogamous?  This site, designed for school students, provided some answers.
Some of the information was surprising to me.  I suspected and was right that the adults are monogamous, but had no idea that the young are born able to swim and can dive 30 to 40 feet under water.  And, did you know that the adult male begins to moult right after mating, and is unable to fly during the time that his mate is expecting?  The female moults five weeks after the goslings are born, and only regains her ability to fly at about the same time that the babies are ready to fledge (9 to 10 weeks).  Nature's plan makes a lot of sense in some ways.  Dad has to stick close by while Mom is sitting on the eggs, and I can't help but think that having Mom regain her ability to fly just as the babes first try their wings will give her greater empathy for the challenge they face.