A Walk with Penelope

I do not remember exactly when it was that I first read Penelope Puddle's blog, but the feeling that I had discovered a kindred spirit remains vivid.  Meeting her for the first time only deepened that impression.  On Monday, she, Bill, Black Jack and I got together for a walk that began with a trip on the Aquabus from David Lam Park to Granville Island.  Here, she checks out the ferry schedule while Bill and Black Jack look on. 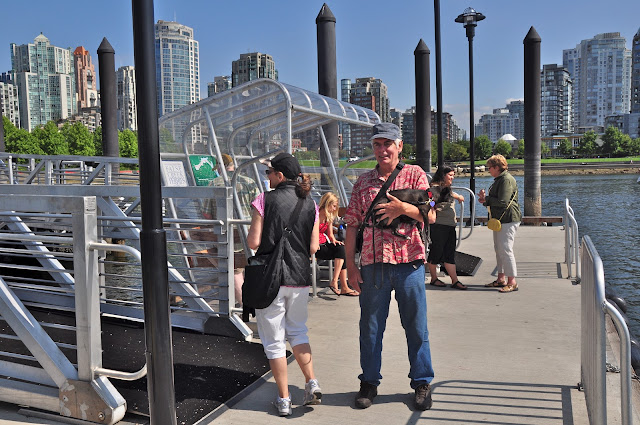 When we got off the ferry, we walked along the boardwalk at water level.  I was hoping we might see a family of otters that Bill and I had spotted a few weeks earlier.  They didn't honour us with an appearance, but this juvenile European Starling enjoying a meal on the pylon was beautiful in the sunlight. 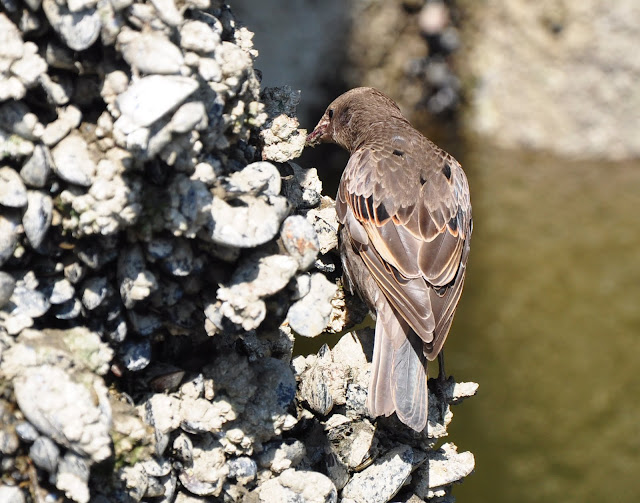 It was fun seeing Granville through a combination of Bill's and Penelope's (not her actual name, but the one I have grown accustomed to calling her) eyes.  This boat was being lowered into the water for the first time.  It had a sign that read, "BOUGHT BY VERY NICE PEOPLE." 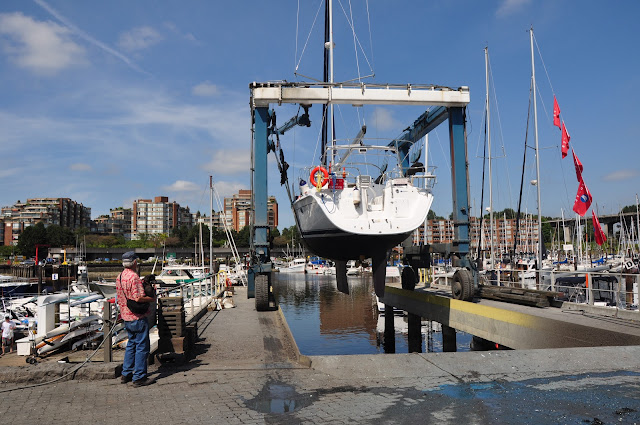 Penelope was drawn to walk down an alley that neither Bill nor I had explored previously.  Bill spotted these colourful boots, and I was struck with the wonder of just how much there is to discover in a small place that I had thought I was coming to know quite well. 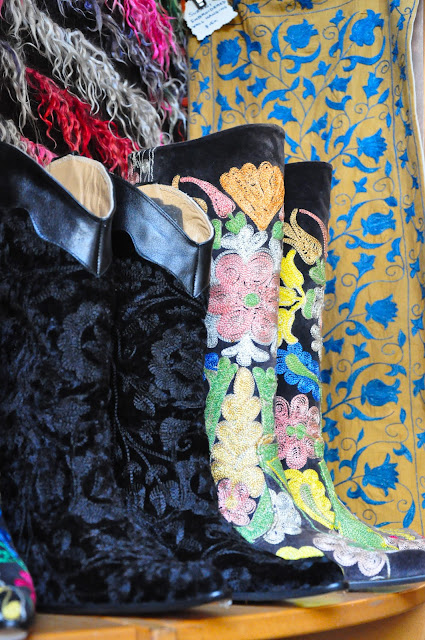 Penelope loved this colourful furniture, and I did as well. 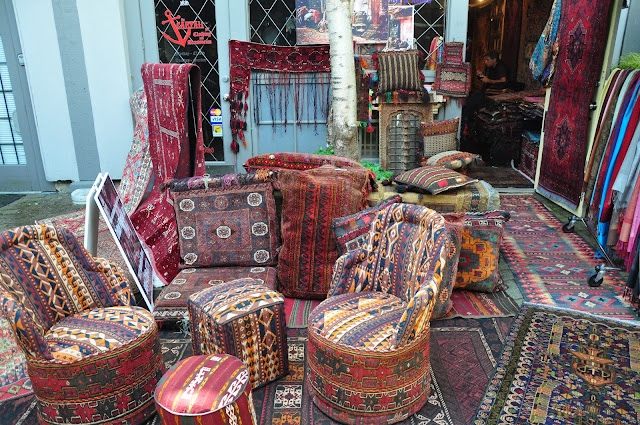 Penelope has a keen photographer's eye, and the shops called her artistic vision to play. 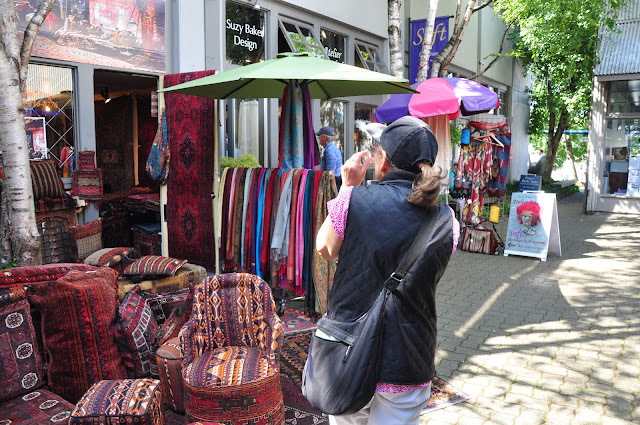 I took this photo through the window of a very expensive-looking art shop.  The door was locked, and there was a note saying, "Wait for the click to be admitted."  I felt we might have to have a special pass, but in fact, the "click" worked and the owner (or salesperson) welcomed us graciously. 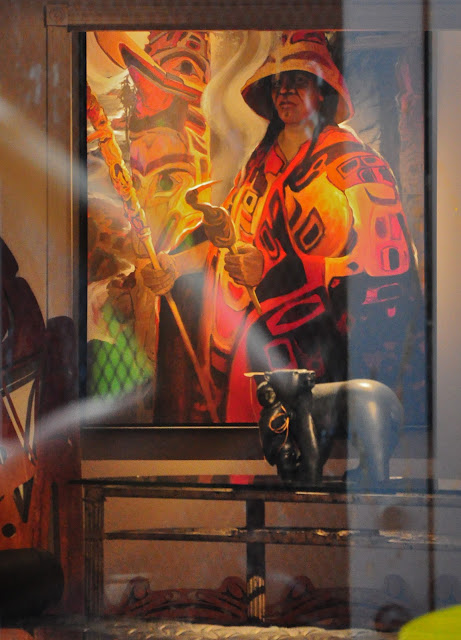 We walked up to 7th Avenue to The Wicked Cafe for a delicious breakfast.  On the way back, I noticed this mural for the first time.  There are many well-known Vancouver landmarks in it.  Can you identify some of them? 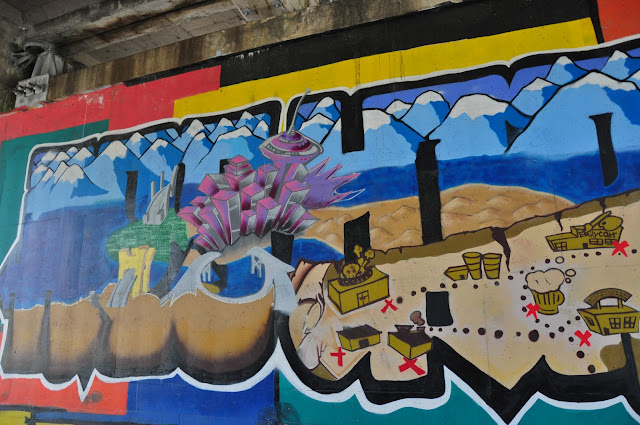 Back again at Granville Island, we headed left to Vanier Park.  This man is there most days, assembling some very lovely Inukshuks.  For the first time, I noticed the faces in the rocks. 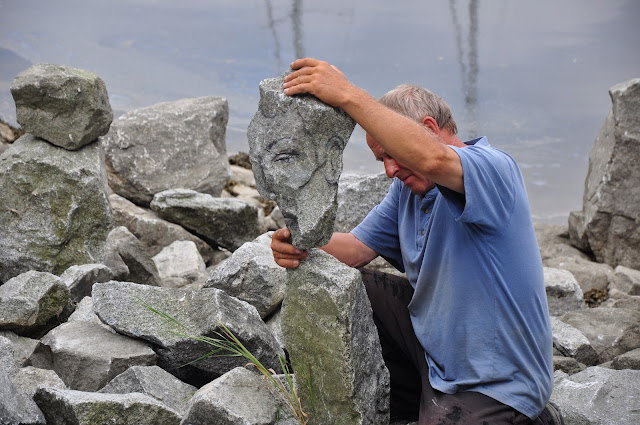 Flowers along the ponds change every time I visit.  Th photo of these flowers was taken during our walk but I had a chance yesterday to talk with one of the gardeners, and saw the look of pride in his eyes as I admired his work.  I am really grateful to the gardeners of this city for the enjoyment they provide to all of us as we walk by. 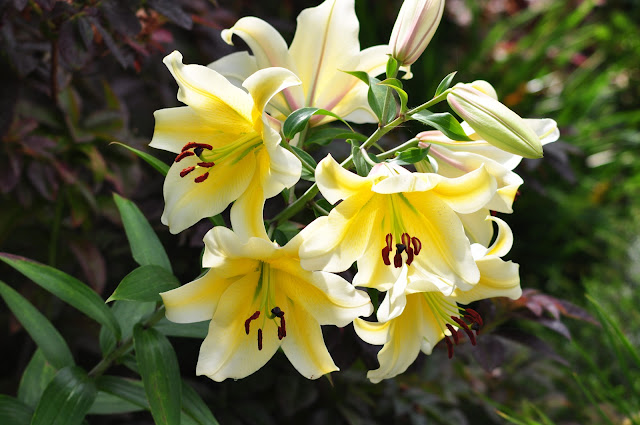 I've noticed that the mouths of young crows have a bright red lining, and think I saw on a nature show that this helps the parents feed them.  This young crow was looking skyward, and perhaps waiting for a tasty morsel to arrive. 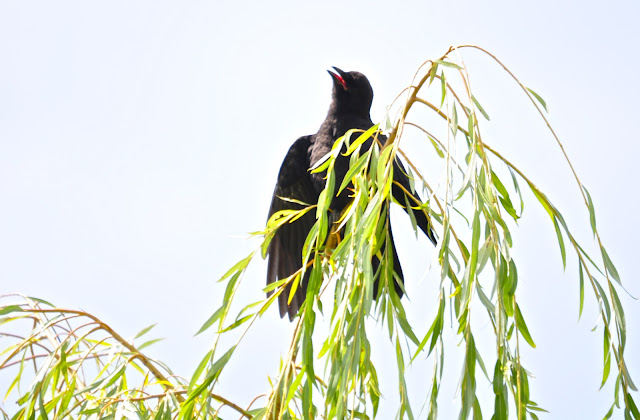 This pond is almost wall-to-wall lily pads, and try as I might, I have not really succeeded in doing its beauty justice.  Close-up shots of individual flowers haven't worked as I hoped, and the ones from further back also seem a bit disappointing.  This photo is my best so far, I think, but I'll continue to try different approaches. 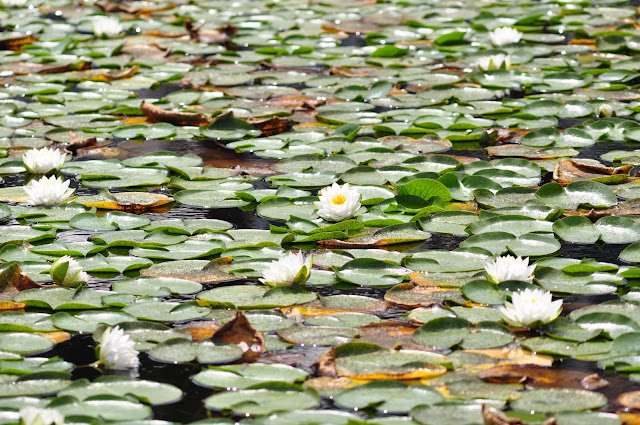 Getting to know Penelope was a treat, and I found myself a bit less focused on taking pictures that day.  It was more fun to watch her investigate "my" haunts and to see those places from her perspective.  The rest of the pictures in this post were not taken that day, but they do have a connection to Penelope.  So often, she has posted about something that has already been in my thoughts.  That feeling has happened over and over again.  One day, a few weeks ago, walking along the seawall, I had noticed the various styles of seats provided for passers-by.  There were roller-coaster ones, 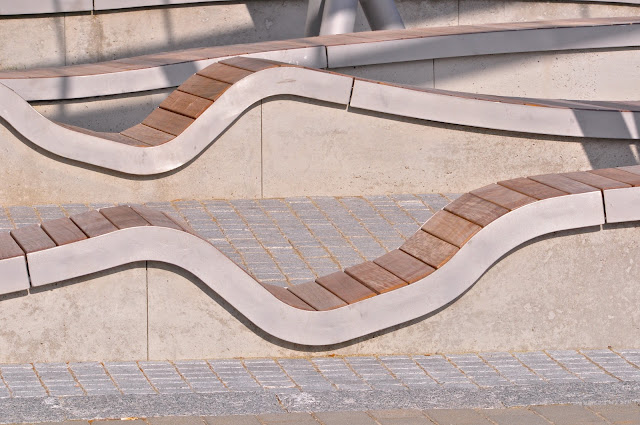 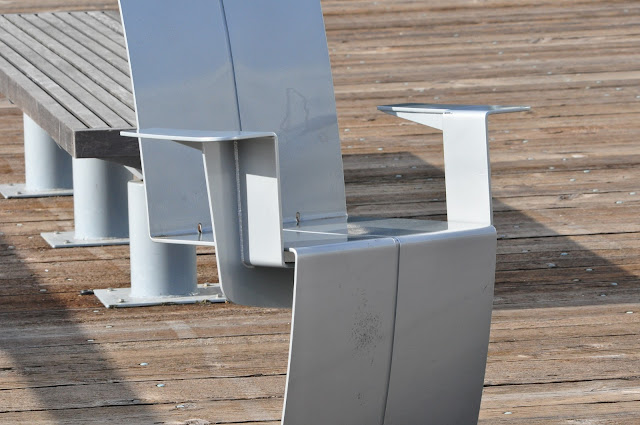 and ones that made me think of a doctor's examining room.  I didn't post those pictures, but when I saw Penelope's most recent post, entitled "Take a seat in my world," I smiled.  Her world is centred a bit more around the Surrey-White Rock area, and mine a bit more around Vancouver, but our worlds seem to frequently connect in quite a surprising way. 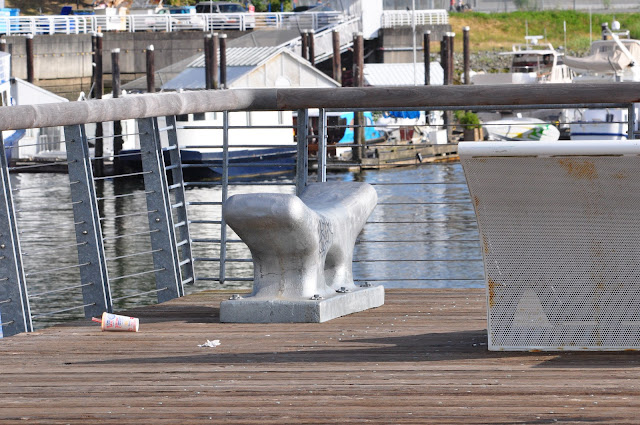 The Vanier eagles were not around when we walked by their nest.  In fact, with both eaglets successfully fledged, they haven't been around much at all lately. This is one of the two eaglets just a day or two after it learned to fly. 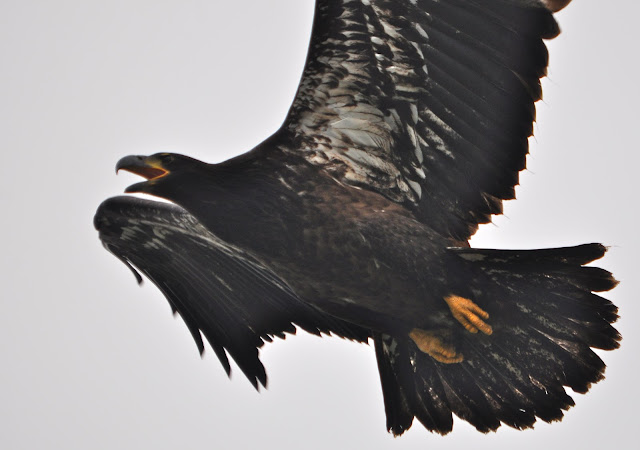 The adult flew over the nest here, working hard to keep the "kids" safe. 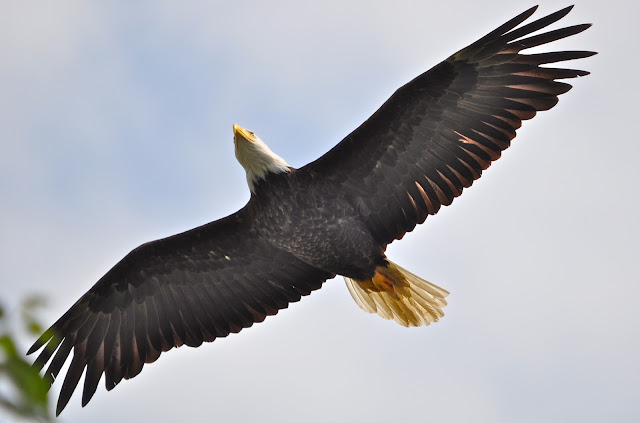 We also walked by Frank and Delphine's sailboat (mentioned in my last post).  Their show would only happen later in the day, and Penelope had to return home before rush hour, so here are a few pictures taken at one of their shows in July. 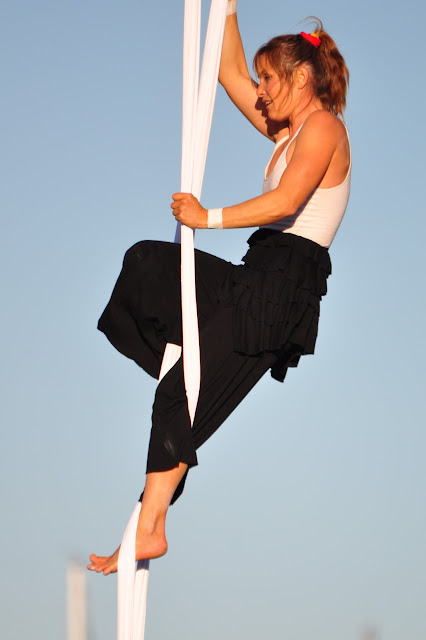 Their last show in Vancouver will be tomorrow. 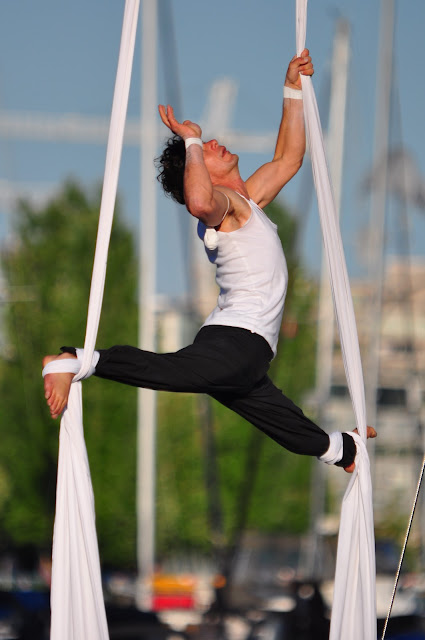 I believe their half-hour shows begin at 5:00 and at 7:00 p.m. but it would be best to call ahead to check for the accurate times.  There seems to be conflicting information on-line. 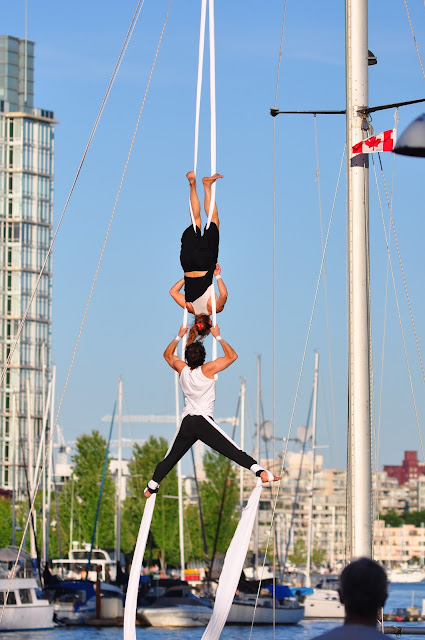 Finally, the otters.  It would have been quite a treat to see them, but I guess photos will have to do for now.  On Sunday, July 24th, Bill and I (and Black Jack!) were excited to see an adult and two young under the dock at Granville Island.  They were very difficult to see, and just about impossible to photograph, but I was really grateful to the man passing by who told us about them.  This is a young one, lying on its back. 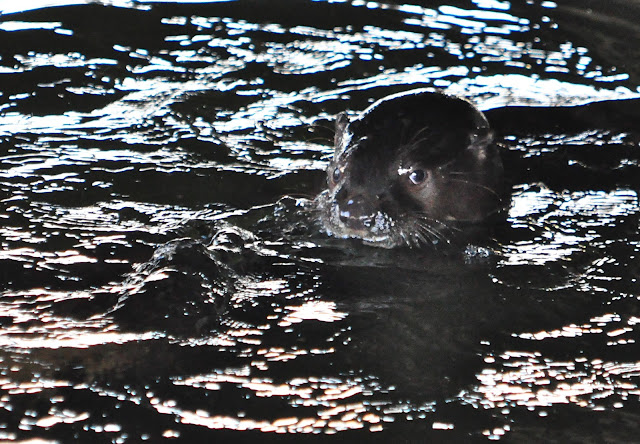 I'm not sure if this is the same young one.  The adult had a fish, and perhaps, this one waited to be fed. 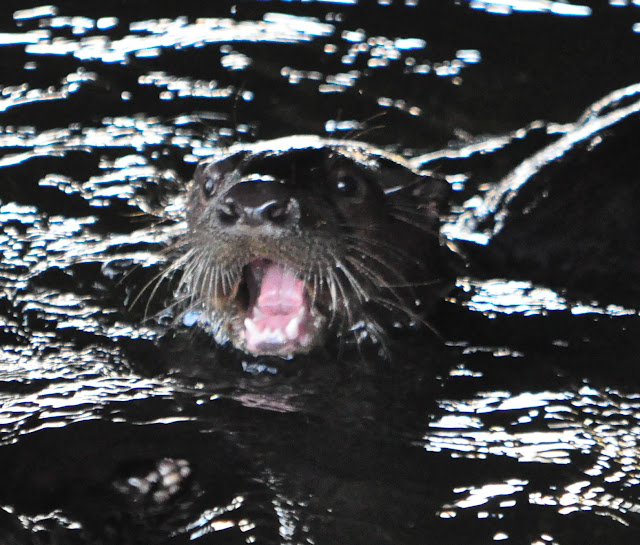 Again, almost impossible to see, but the three are together in this shot. 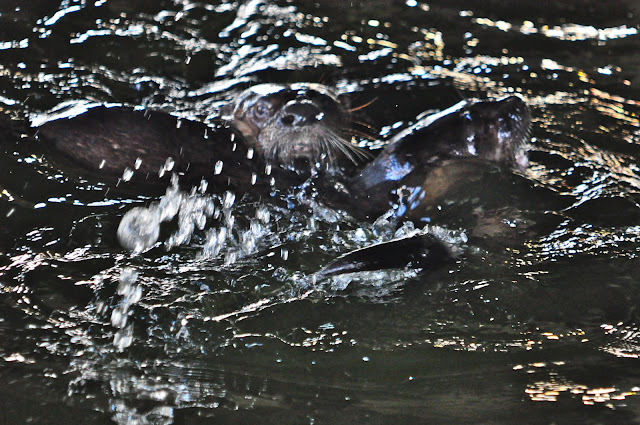 We had also heard about a family of otters along the seawall near the Lions Gate Bridge.  Twice, we looked and couldn't find them, but yesterday, were luckier.  I wonder if there's any chance it could be the same family.  They were enjoying a wonderful feed.  This young one needed a table napkin, but I doubt it worried much about that. 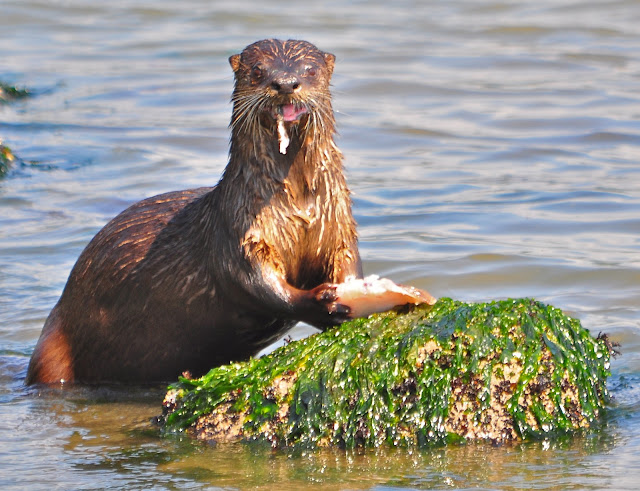 There seemed to be no bickering at all about food.  I'm guessing they were very well-fed. 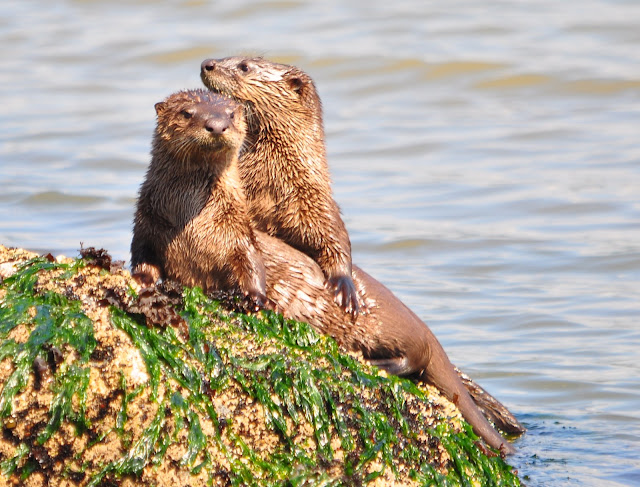 One shot with the three of them.  I took a lot of photos, and will probably show more in later posts.  For now, just a few for you and for Penelope. 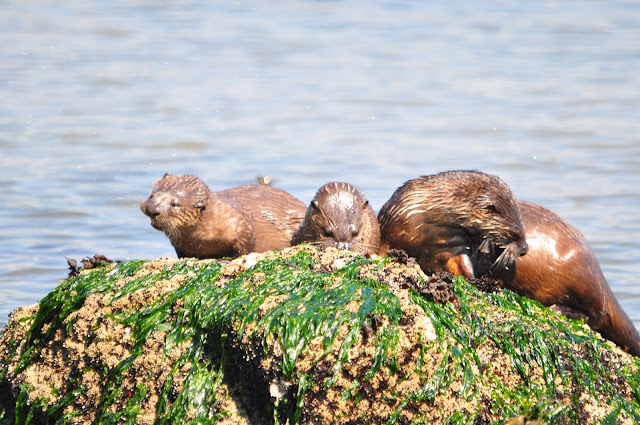 To Penelope: Thank you so much for spending time with us.  It was every bit as much fun as I knew it would be.


And to other readers: Thank you for stopping by.  Have a happy weekend!
Posted by Black Jack's Carol at 8:16 AM