The letter "R" for ABC Wednesday

Some of you may have noticed that I skipped "O" "P" and "Q" but I think that is okay for now. Recognizing that my goals are sometimes a bit rapacious is probably a good thing :)

Razzle-Dazzle
Colour recharges my spirit and I recently revelled at the sight of this display at Urban Fare (the local grocery store).. 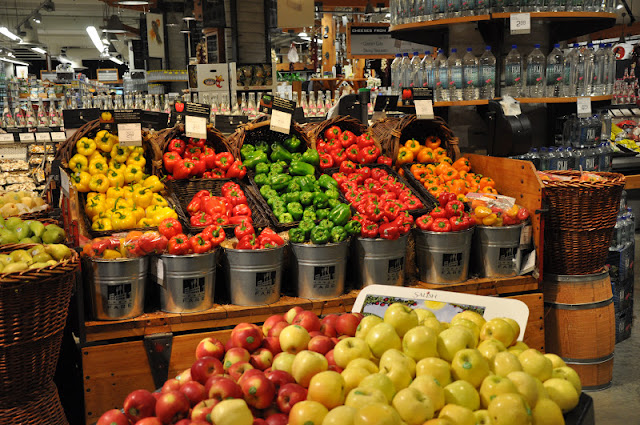 These cormorants flew over English Bay just as the sun was setting.  That their dark wings could absorb and reflect the light so magnificently brought rapture to my heart. 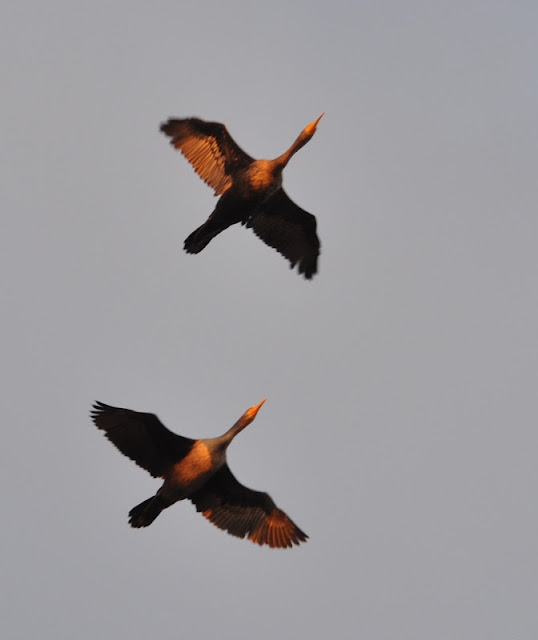 And, the splendour of these trees, almost too much a few days ago, is received with double gratitude today (Tuesday), when the rain falls and the sun hides. 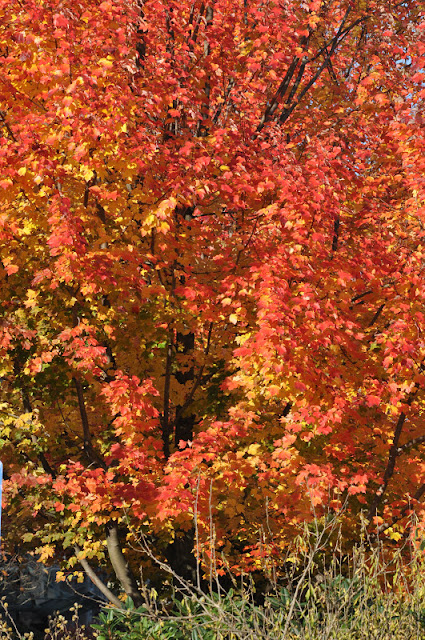 Rebellion (7 small stories)
1
Black Jack and I watched a young husband and wife and their two almost identical dogs in the park a few days ago.  I will let you decide how many rebels were present.  The woman gave me permission to take the photos.  I told her I thought the two dogs, one ignoring the vehicle and the other infuriated by it, were hilarious.  She smiled and said, "Yes, and the three-year-old too."  I looked around for a child and she pointed to her husband.  He was operating the vehicle with his remote control.
"You will NOT be a member of my family.  Get lost!" 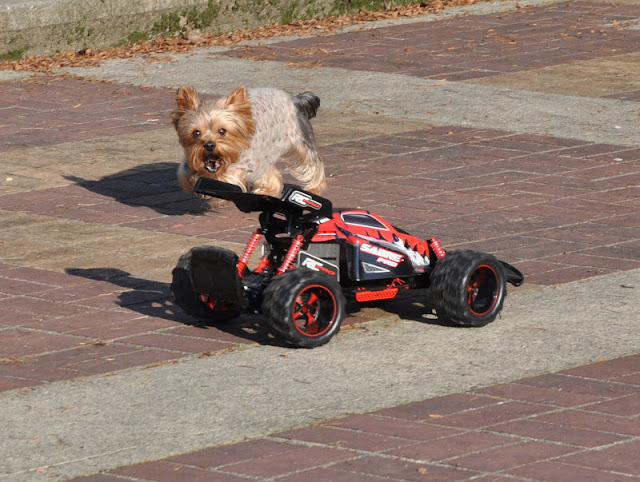 "Check out my front feet.  I can do anything you can do!" 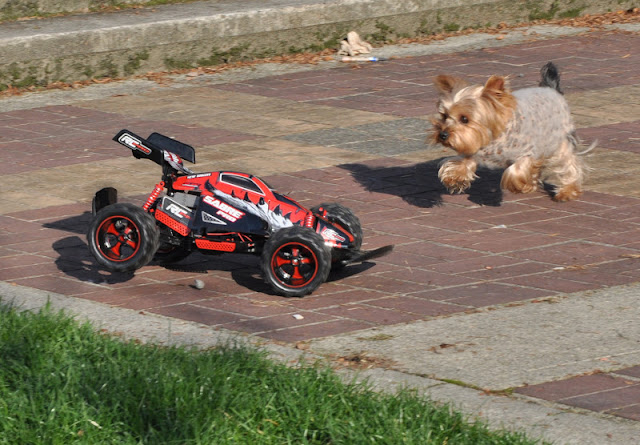 I felt a little tug on the leash and looked behind to see Black Jack rolling in the grass. 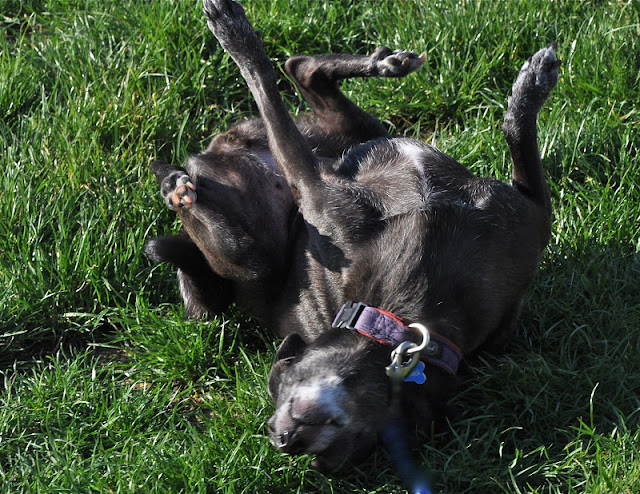 "It's about time you noticed me." 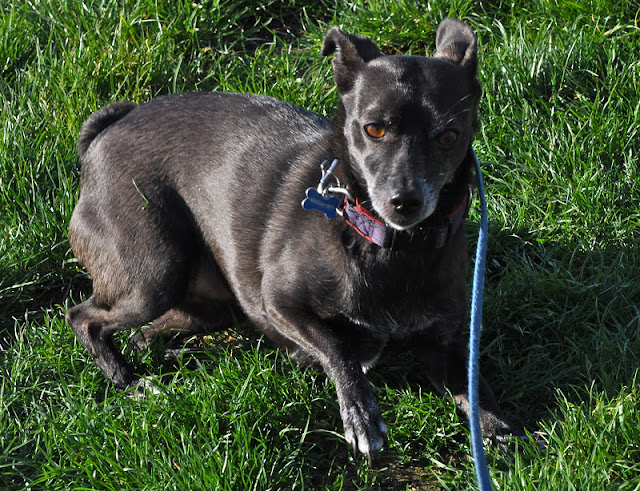 The woman had to yell at her husband several times before he finally responded to her request to stop the vehicle while she removed the dog's coat.  The action continued for quite a while after that.  When we left, the hero of the story appeared to be just warming up. 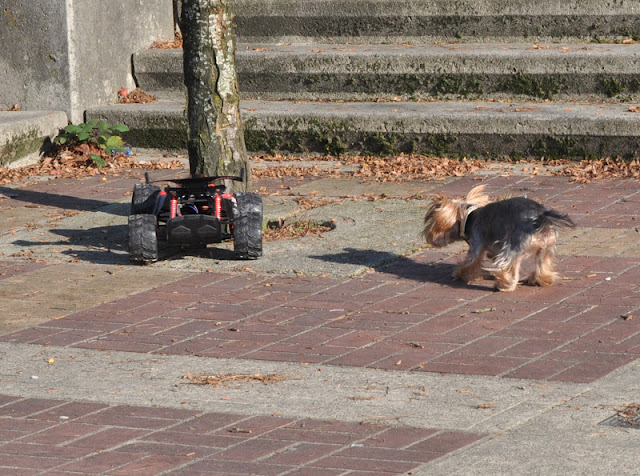 2
The cormorants that nest under the Granville Bridge have reached adolescence. 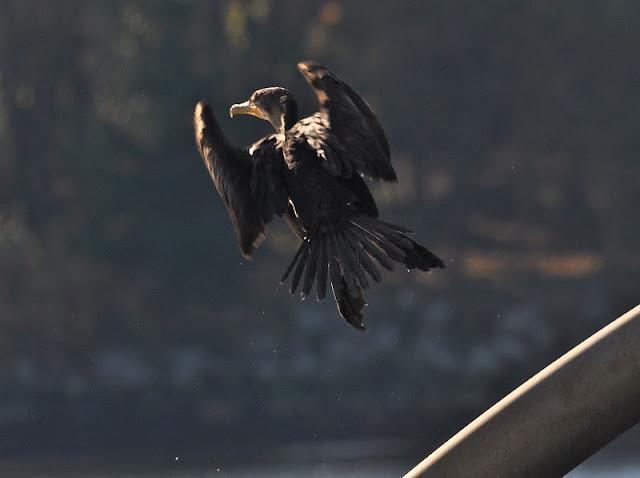 "And I can be a rabble rouser if I like!" 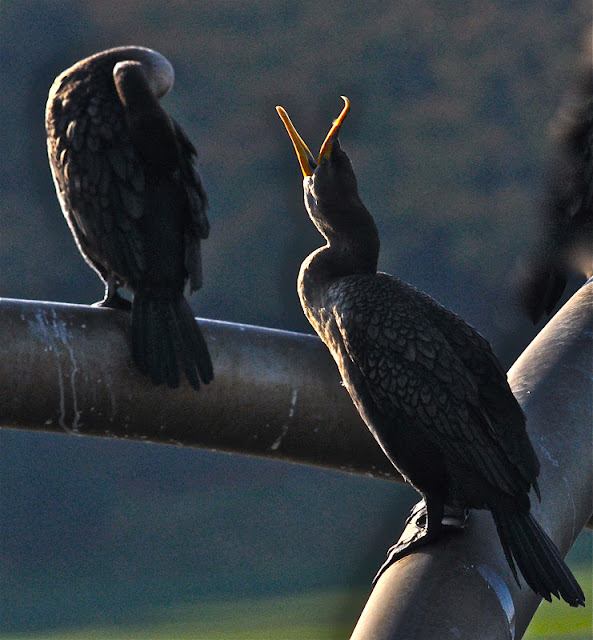 3
I try to make sure Black Jack eats healthy and worry when she supplements her diet with junk found outdoors.  We argue about this quite a lot, and in fact, she now openly rebels, quickly swallowing anything she can find before I can dig it from her mouth.  We both scan the streets as we walk.  Sometimes, I win, and sometimes, not.  The other day, as we walked by a food stand, I heard this gentleman whistle.  Two barely audible  pitches that I thought wouldn't register with Black Jack.  I tried to keep walking  but she snapped to a halt as though struck by lightening, spun around, stood tall on her hind legs and stared up into his eyes.  He was smitten and asked if he could give her something.  "A tiny piece of meat with no spice would be great," I said.  He gave her a dumpling-sized piece of meat wrapped in batter.  There was rapt pleasure on both their faces, his from witnessing her full appreciation of his offering.  I remember thinking I lost that one but the elation all round was worth it. 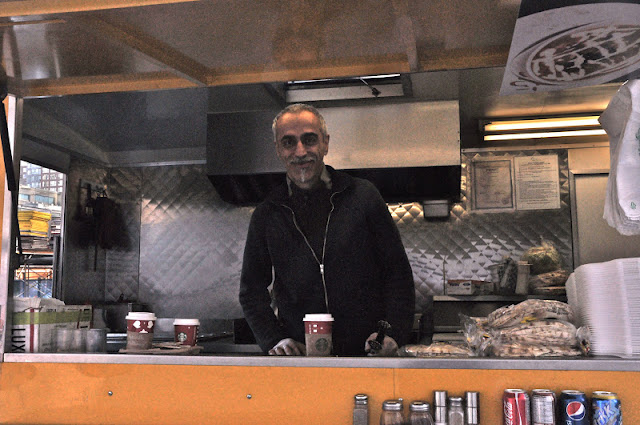 4
I came across this chalk art a moment or two after the above story.  The artist represents my favourite form of rebellion.  He bothers no one, enhances the neighbourhood, quietly works on his skills, makes a bit of a living and avoids the rat race of a traditional job.  I paid him $2 for permission to take the photo, hoping he would be in it as well, but I guess that would have required a pay raise :)  You can see his carefully shone shoes in the top right corner.  I only noticed after arriving home that Black Jack was reflected in a mirror on the back wall.  Here's a link to Raphael's Transfiguration.  You will see that the artist has chosen to focus on just a small section of the original. 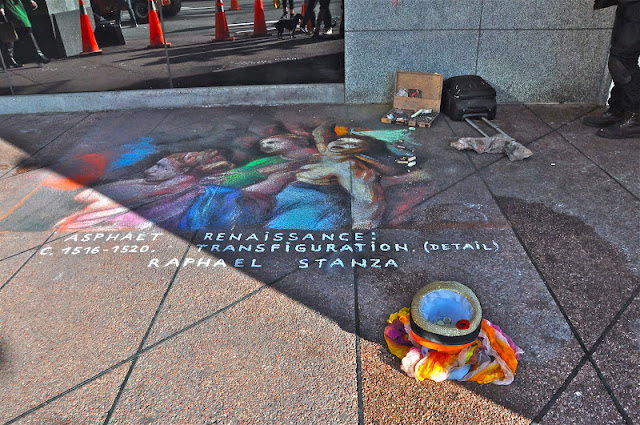 5
I am more conflicted about the rebellious theme in this next story.  On Saturday, a small group gathered at the Art Gallery to protest Prime Minister Harper's China Trade Agreement.  I had some questions about the lack of parliamentary debate but I wasn't sure I wanted to protest without a lot more background information. I decided to go more as a recorder than a protester.  Although I arrived only a few minutes before the appointed time, there was no one around, so it was a wonderful opportunity to take photographs. 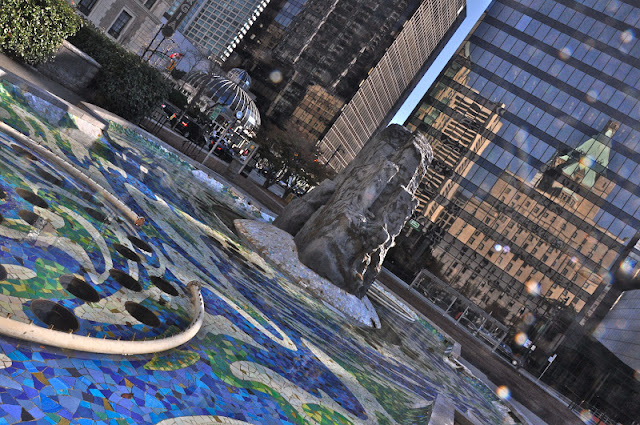 Black Jack loves anything that shimmers and was happy to stick around, but my hands were freezing and I very nearly went home. 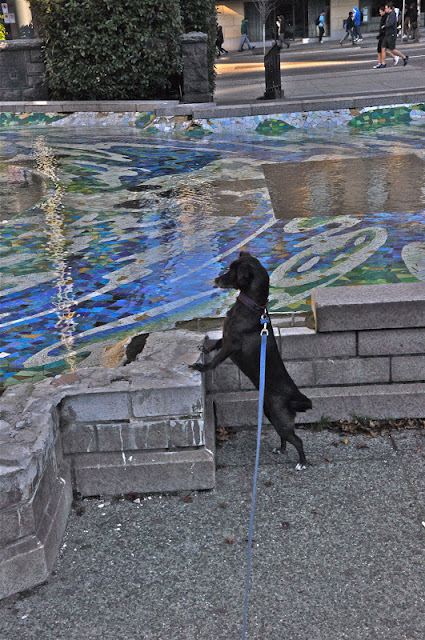 Then, a couple of sincere young people arrived, but my heart sank at one word on their sign.  We are fortunate to live in a democracy that, for the most part, works really well.  Surely, our elected prime minister does not rate a word used to describe the likes of Hitler. 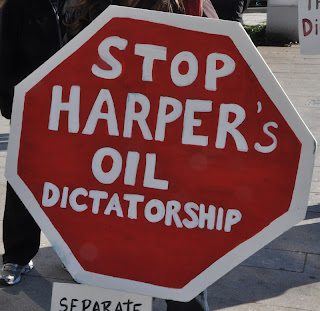 I compare government leaders in a democratic society to parents.  Unlike parents, we do get to choose them, but in other respects, I think the analogy holds up.  Sometimes, they have to make decisions that they believe to be in our best interest.  Once they are voted in, even if they weren't our personal choice, I think we have to place a certain amount of trust in the system.  Some policy decisions require knowledge that, no matter how accountable our leaders try to be, needs more research than most citizens have the time and background to undertake.  I guess what I'm saying is that our right to peaceful protest (an important and again, much appreciated, one) needs to be exercised with a lot of thought.  Jumping on the band wagon is not the way to go, and that is what I would have been doing, had I decided to hold up a sign and march in front of the gallery.  This lady's advice was perhaps the best of all, although in this particular instance, too late to be helpful. 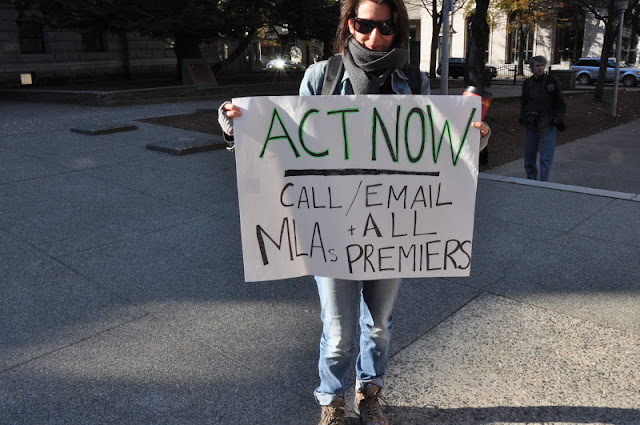 The deed is done, and you may accuse me of naivety, but I think it will be okay.  Rick Mercer is upset, though, and I do admire his courage in expressing his viewpoint.  My passive approach may be the easy way out, and of course, I would be interested in your thoughts, so feel free to express them here, should you feel so inclined. In the mean time, here's Rick:


A new-to-me artist with an "R" name is  Paula Rego.
I see sincerity in her face. (Photo found at this site.) 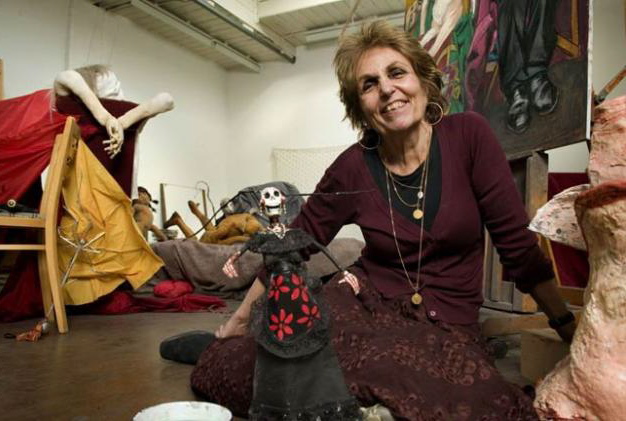 I found her in The Art Book and the photograph of one of her works shown below was the one selected by the editors as representative of the best of her work. To be honest, it disturbs me.  So much so that I have left it in a smaller size than normal and I do warn that you may want to skip over it.  If it does disturb you, then I hope you will go on to read Section 7.
It is one that I I think will leave you with a feeling of repose and tranquility. 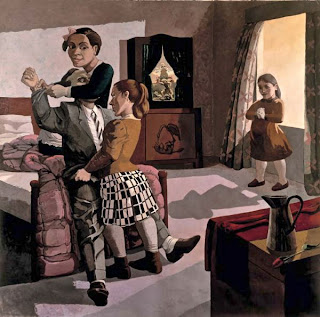 This quote from Wikipedia provides some insight:

The method Rego employed was based on the Surrealist idea of automatic drawing, in which the artist attempts to disengage the conscious mind from the making process to allow the unconscious mind to direct the image making.[10]

As with every artist discovered because of these ABC posts, I am happy to have made the acquaintance of Paula Rego.  Her art, as all art must, triggers a strong response and I might add that it definitely falls well within the theme of rebelliousness :)


On Saturday, we attended a concert at The Orpheum where we heard the Vancouver Symphony and Bach Choir perform several works by Mozart.  I enjoyed the Haffner Symphony and Ave Verum Corpus very much, but it was "Et Incarnatus Est"  from his C Minor Mass with soprano, Karina Gauvin, that continues to play over and over in my mind. 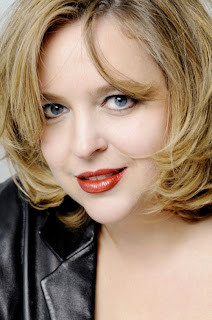 We were in the front row, and the purity of Karina's voice, floating through ethereal oboe, flute and bassoon passages, sent shivers of pleasure up and down my spine.  I closed my eyes and was transported to a place of runic tranquility.  I wish I could give you Karina's voice, because I have listened to perhaps 20 recordings of this music in my search for the sound that she produced so effortlessly.  There wasn't one that, for me, reached the perfection of Karina's performance.  The closest I can come to sharing my experience with you is this very fine version with Leonard Bernstein conducting and Arleen Auger (1939-93) singing the solo in a performance shortly before she died.
Try it.  Press play, close your eyes, sit back, and let Mozart work his magic.  You may want to watch it twice, once with your eyes open, as the musicians (Including Auger) are remarkable to see in action.  And, how does this fit into a theme of rebellion?  Well, as we learned in the talk before the show, Mozart was going through a terribly difficult time when he wrote this music.  He loved and respected his father, but had rebelled by moving away from home, quitting his detested job and marrying Constanze against his father's wishes.  Furious with him, Leopold refused to visit, although they continued to correspond regularly.  Finally, Mozart decided to take his wife home to visit the family and to present his father with the first of his masses that was inspired from his heart rather than by duty.  In fact, all did not go well at all, but I'm not going to go into that here.  What we are ultimately left with is music to soothe the savage breast.  Normally, for my ABC posts, I find one musician with the appropriate letter at the beginning of his or her name, but for this one, the "R" will be represented by the rebellion that inspired rapture rather than by the name of the composer.

My ABC post for the letter "R" has now reached its conclusion!  For more thoughts from around the world about the letter R, check out the ABC Wednesday blog meme.  Whether you made it all the way through this post or whether you just read a section or two, I am most grateful for your presence and for your responses, should you wish to share them.  Thank you so very much for stopping by.
Posted by Black Jack's Carol at 3:35 PM