Bill and I met six years ago today.  I stated that was "seven" years in a recent post but I counted incorrectly.  I've never been good with anniversary dates, not even for the most consequential ones in my life.  But, the feelings accompanying those times are so compelling, so colourful, it seems I must  be able to touch them, smell them, taste them. Conjuring up images of Bill walking into my life brings calm and clarity.  I love him. Whatever happens, that is constant and that certainty sits at the top of every choice I make.

Bill's comedic instinct is strong.  When I thought of a "C" theme, I realized that many of the cultural events we enjoy inspire laughter.  Below is Tom Chin.  We saw him on May 30th for the second year in a row in a production called Etch Your Sketch Off Asian Comedy Night.  You can read a review of the performance here.  Not only is Tom hilarious but he also has a compassionate side to his personality that is impossible to miss.  We were very sorry to hear that he and his wife, Joyce Lam, are stepping down from their respective roles as host and artistic director. You could say that Bill and I stood out, being surely the two oldest audience members and perhaps the only Caucasian ones as well.  It didn't hurt that we sat dead centre in the front row :)   One young improv artist even included us with a clear gesture in our direction as he complained about senior drivers. Tom approached us before the show to ask how we had come to hear of it.  He also ran down the hall as we were leaving, putting his arm around us and thanking us for attending.  Don't you think Tom and Bill look like compatible comedians? 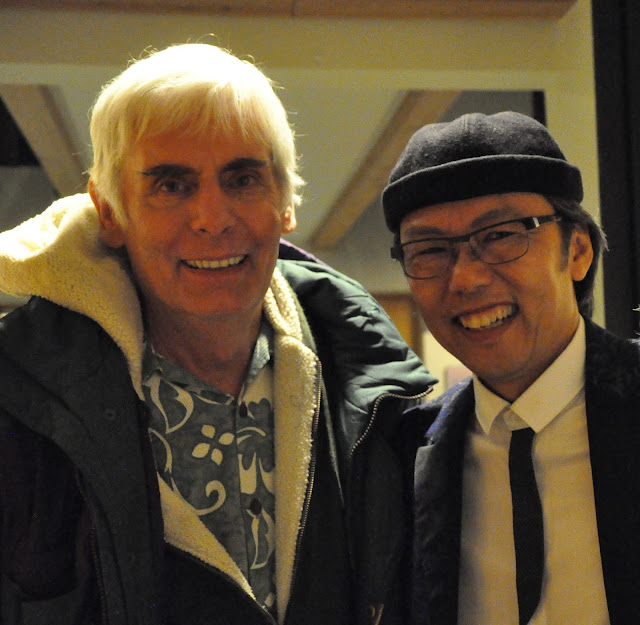 I confess that I inserted this picture of Black Jack when I realized there were no animals  in the post.  Black Jack inspires a lot of chortling and chuckling in our lives and so I hope you will agree she has earned the right to be included. This shot was taken on June 12th (Bill's birthday), a split second before the one I posted here. 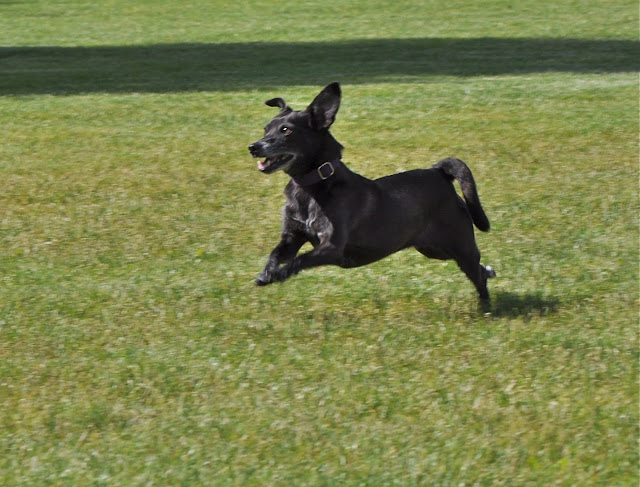 We happened on this next concert completely by accident.  During one of our walks, we passed West Point Grey United Church and saw a sign advertising Vetta Chamber Music.  This was seriously wonderful music-making.  It would be well worth your while to check out that link if you live in or near Vancouver as their next concert will be in September.  They even do a reception afterwards with fine food and a wonderful opportunity to mingle with.. 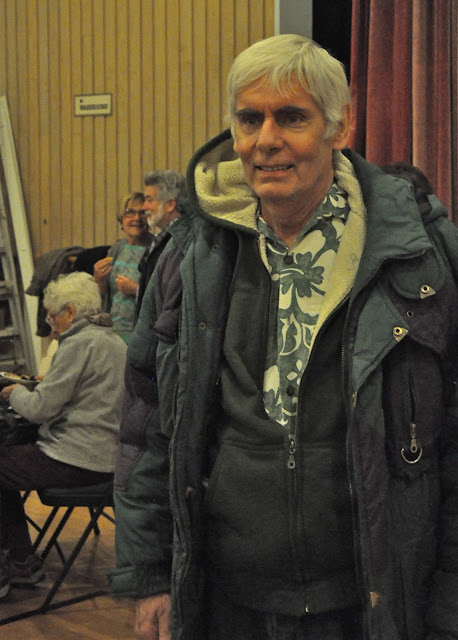 the performers and audience members.  Below is Joan Blackman (far left), violinist, associate concert master for the Vancouver Symphony and organizer of the series.  She performed with Arthur Rowe, an incredible pianist who, I swear, didn't miss a note in spite of ones that flashed by at lightening speed and intensity.  I caught these impromptu shots.. 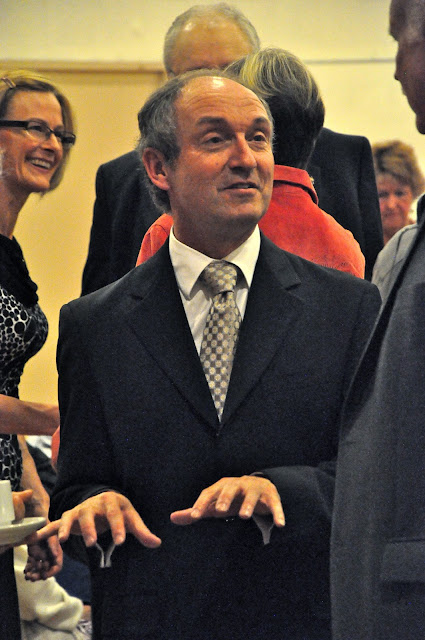 of him playing piano even as he talked. 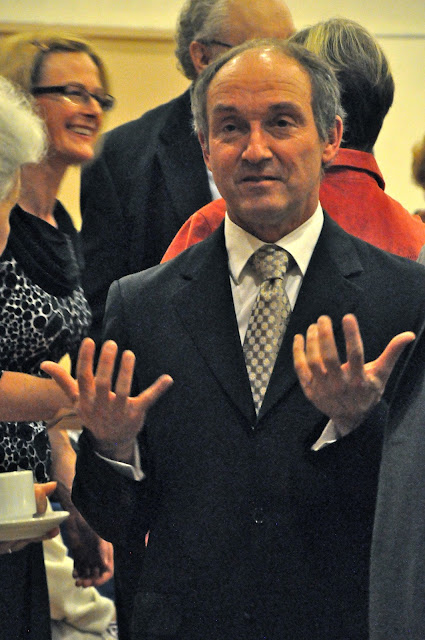 The third member of the trio (centre) was cellist, Eugene Osadchy.  You can listen to him play a Rachmaninoff Cello Sonata here. Perhaps you will pick up a comedic glint in his eye. 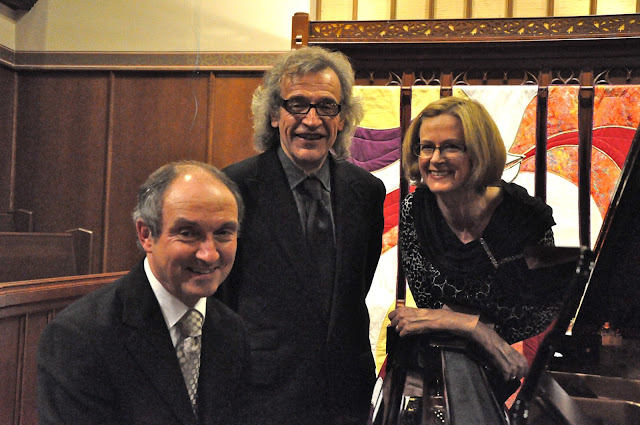 If not, I feel this next shot will convince you that classical training does not preclude a sense of humour.  We were captivated by the music making but also by the comradeship between these fine musicians. 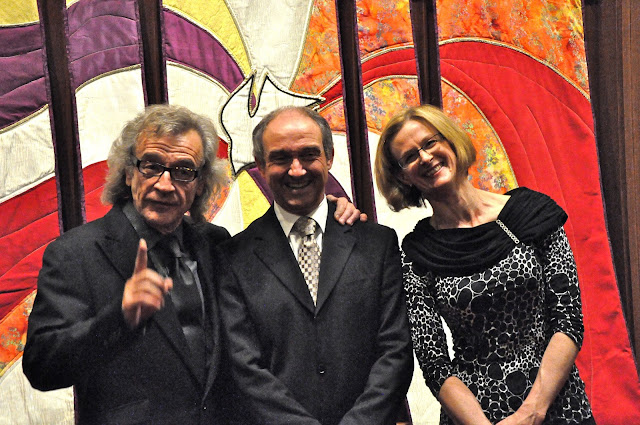 One other event that brought huge enjoyment was a song festival organized by Vancouver International Song Institute, but also very much the dream baby of UBC's Rena Sharon.  I am in awe of her and was enthralled by her Learn to Love Lieder lecture (too bad it isn't "L" week).  There were many concerts and lectures and performances around town for that festival including one shown (with Black Jack in attendance) in my last post.  We loved a lecture by Jake Heggie (below) and the performance of his composition, 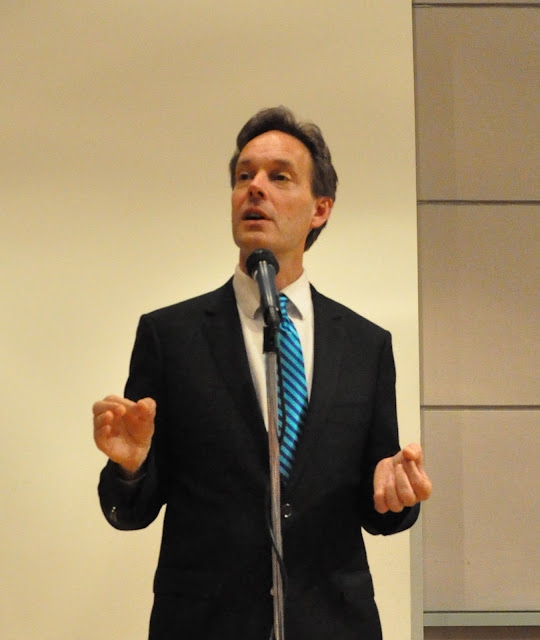 "At the Statue Venus" by Robyn Driedger-Klassen.  It was a laughter-inducing, awe-inspiring portrayal of the variety of emotions a woman experiences as she stands by the Statue of Venus waiting to meet a blind date.  Robyn's countenance.. 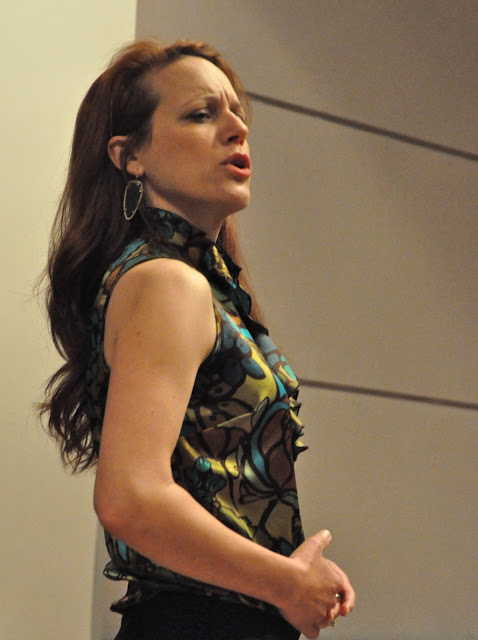 so vividly portrayed each emotion that it was hard to separate the performer.. 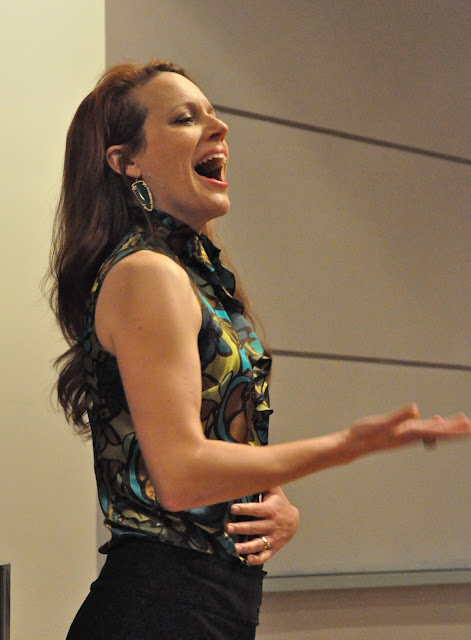 from the character in the narrative.  Here, she moans that she has made the worst possible clothing choice (black pants). 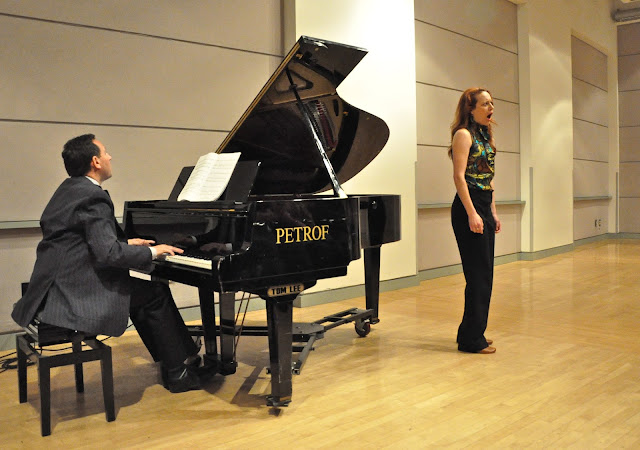 She finally gives up with the word "whatever" and then explodes that she hates people who use that word in that way. 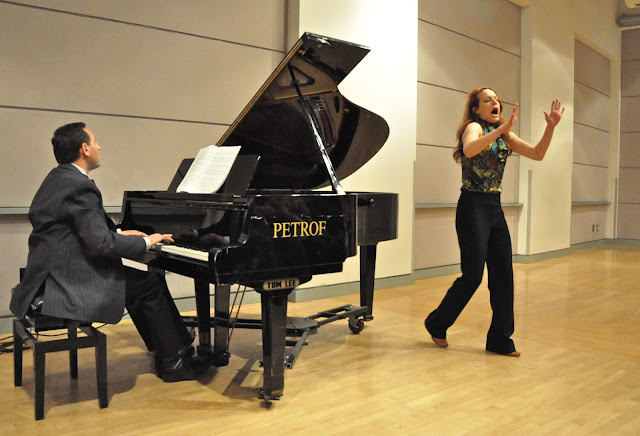 Here, she imagines that her prospective date may use the expression "whatever" constantly. 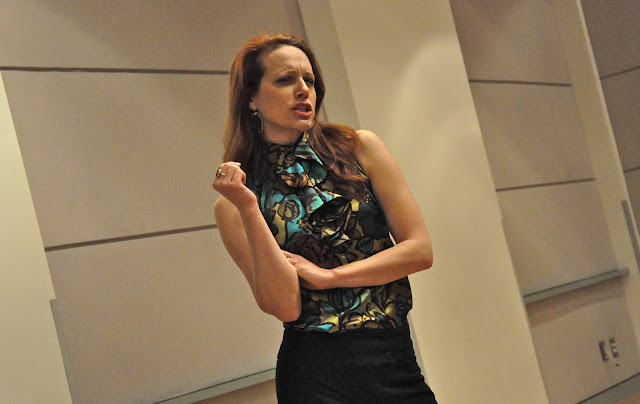 But, on the other hand, she feels compelled.. 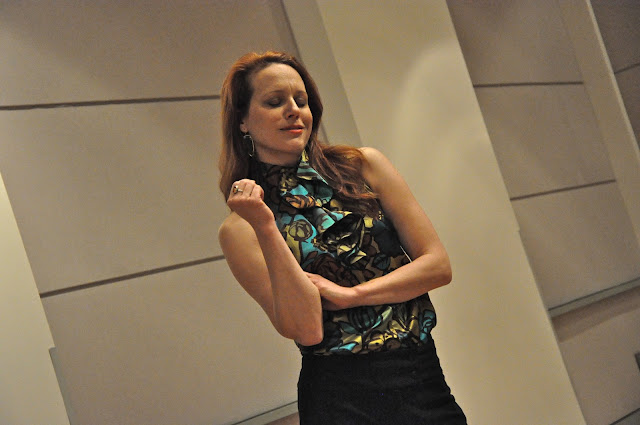 to show her best side because rejection would be cruel. 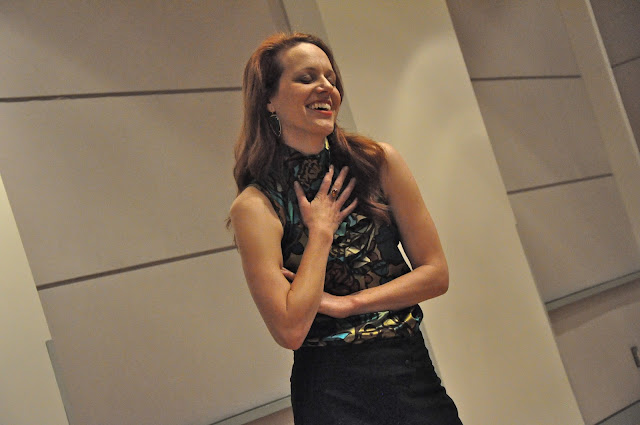 Funny and sad at the same time, I was struck not only by Robyn's vocal skills but by her ability to portray a character we could laugh and sympathize with concurrently.  Below, she cracks a joke about the many times her wonderful pianist (Terence Dawson) "saved her ass."  I hope that doesn't offend anyone, but those words.. 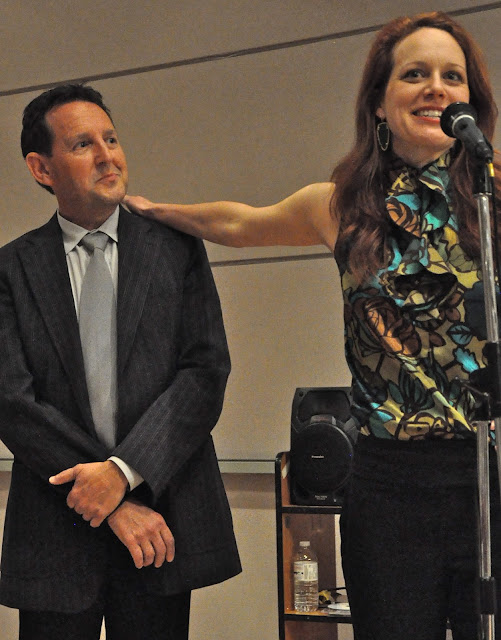 and her full-out laughter as she said them cemented my impression of someone it would be great fun to have as a friend and colleague. 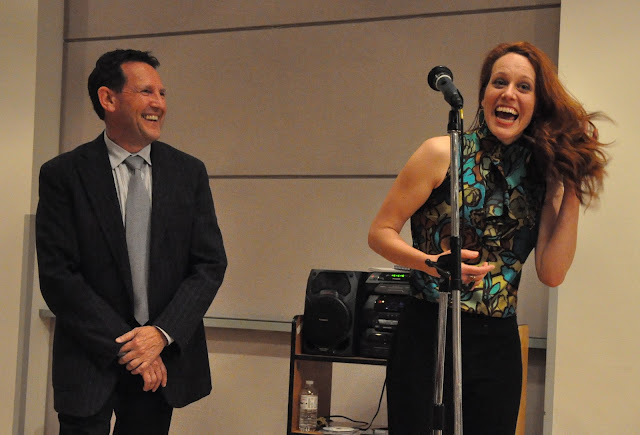 I had much the same impression of Jake Heggie, the composer of the work.  So many times, I found myself nodding my head as he talked.  He is a down-to-earth person who confronts his fears and challenges with courage and laughter.  His father's suicide, his discovery of a way to adapt his piano technique when his career was halted for five years due to focal dystonia are just two details of a story I hope he will one day relate in more detail because within it, I suspect, is inspirational content for others who face life struggles. 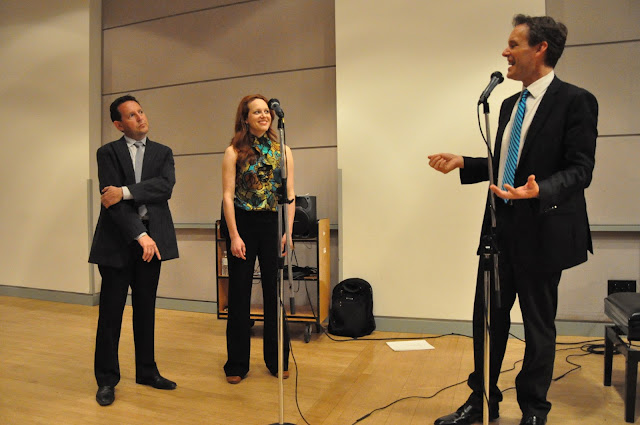 It has been quite some time since I've posted to ABC Wednesday, but I would like to continue my habit of choosing one work of art and one of music to represent the weekly letter.  I'll try to allude to the general theme (comedy and comradeship this week) of the post when possible.  In that spirit, I've chosen a painting (posted with permission) by Aline Smithson that she calls "Whistler's Mother Reinterpreted." It takes its cue from the famous work by James NcNeill Whistler.  I discovered Aline Smithson's interpretation in a publication called Yellowtrace.  If you don't check out any other links in this message, I really hope you might find time to look at that one, because the photograph below is just one of  several that not only bring out the comedic potential in art but also gave me food for reflection as I imagined the relationship between the artist and her mother.  Her mother is no longer living and sadly, did not see the final result of this project, but I love to think of the laughter and companionship she and her daughter experienced as they worked together to plan costumes for the portrayals.  Thank you for the quick response from Yellowtrace in granting permission to post the photo.  I so loved the photos and actually imagined my own mother in several of them.  There's some "you had to be there" humour in those works that I believe my sister will especially enjoy. 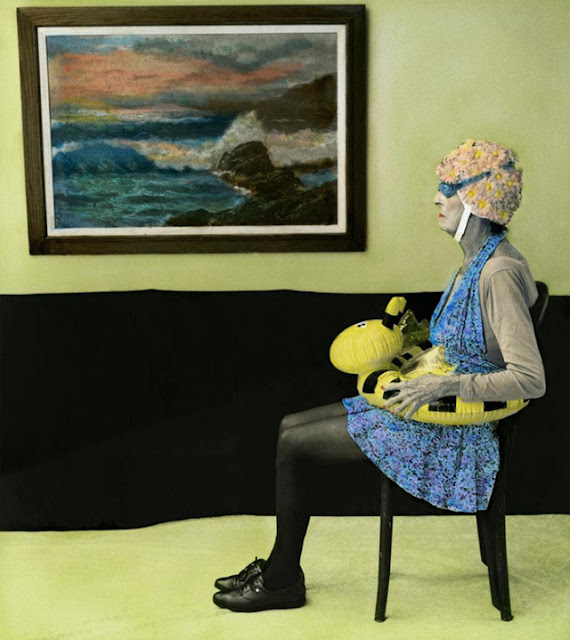 Finally, an oldie but a goodie in Carole King's recording of "You've Got a Friend.  I've cherished Bill's endearing sense of humour ever since meeting him.  Surely, Carole King's words are coming straight from my heart to his.  He's on his way to pick me up in 15 minutes (Yikes!  I'm not packed!).  Back to Point Grey I go.  I can hardly wait!  Thanks, ABC Wednesday, for giving me an excuse to say "I love you" to him one more time!