Linking to two memes today.  We missed TexWisGirl's Good Fences last week and I haven't stopped by Orange You Glad It's Friday for a very long time.  So today's the day!  Many thanks to Theresa and Maria for hosting these fine memes.

Below, the bike path near our apartment building with an orange-clad cyclist going by a fence of wind-blown grasses. 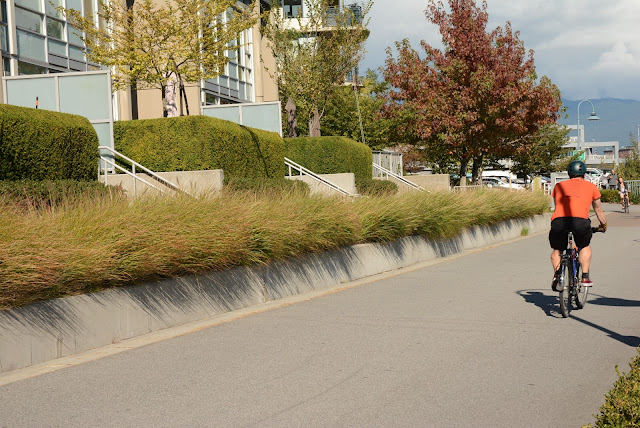 The structure that holds up the roof of BC Place is fence-like with a little imagination, and with the orange leaves and blue sky, caught my fancy, which Bill says is close to fency :) 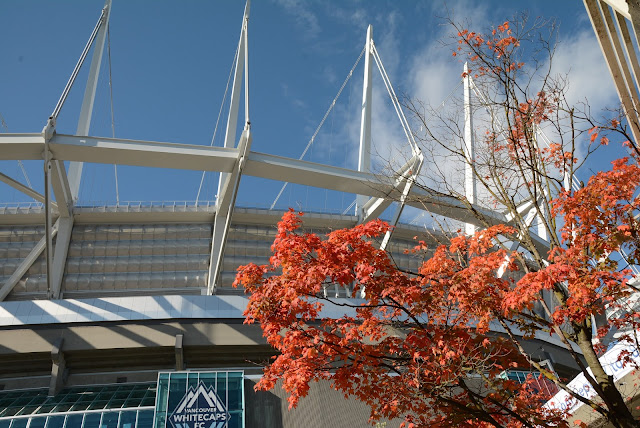 Ford was sponsoring a teen-safe driving program and we watched through the fence for a while.  It looked like so much fun, we wished they would let seniors drive. 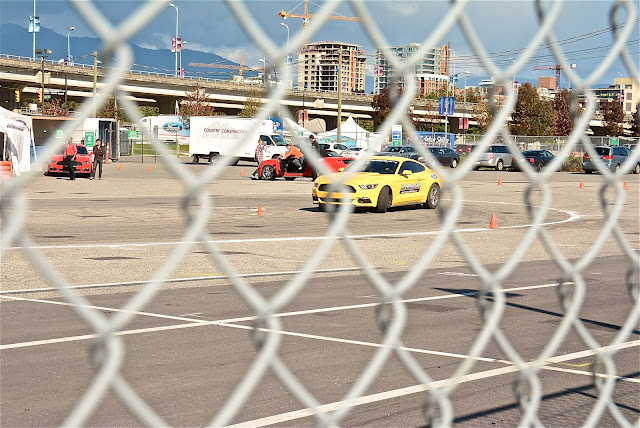 This is a hoarding fence protecting a construction site for a 60-Story building going up.  The mural on the fence tries to show the future view. 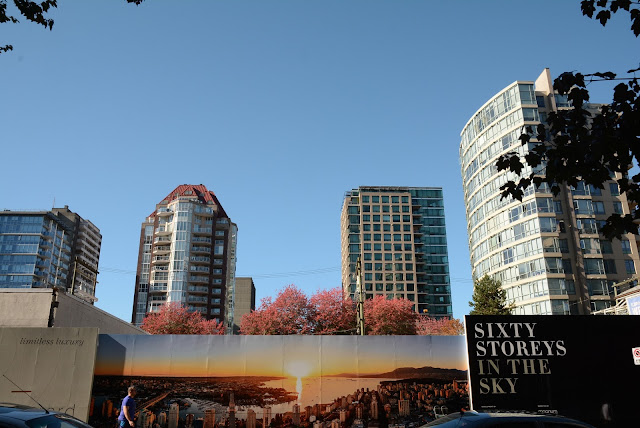 Sadly, the orange trees behind the fence will be sacrificed to the building. 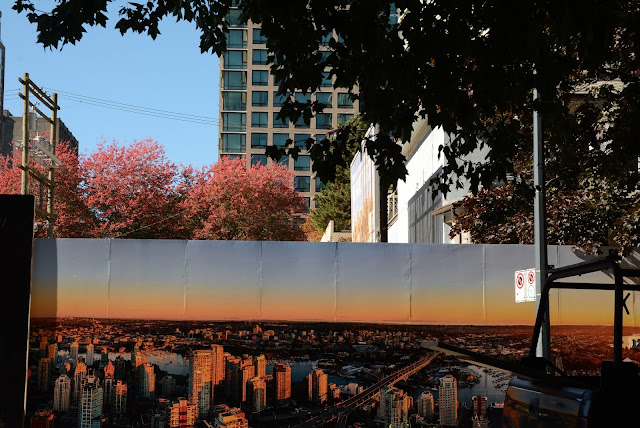 As described in my last post, we attended Vancouver Art Gallery for a wonderful display of 500 years worth of Italian paintings.  I've shown this fence before at the top of the first flight of stairs. 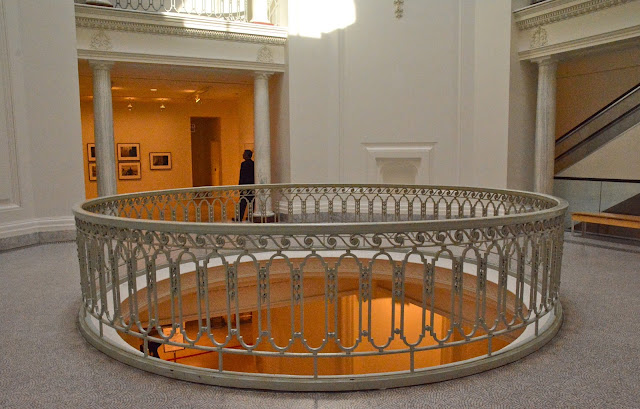 I never tire of it.  It is a real heritage fence in a heritage building. 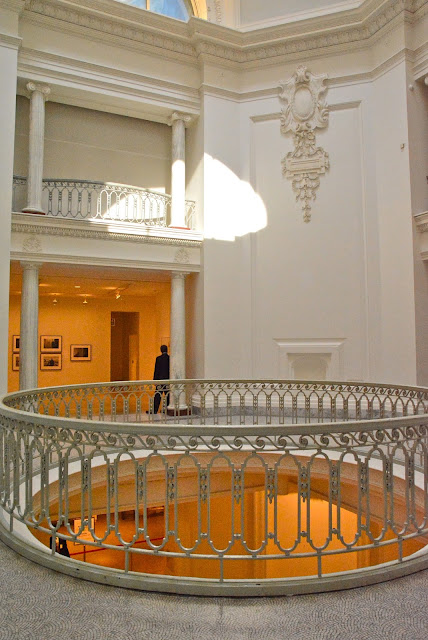 This is the skylight above the fence.  Bill just said, "Man!  They don't make buildings like that any more.  Why don't they?"  :( 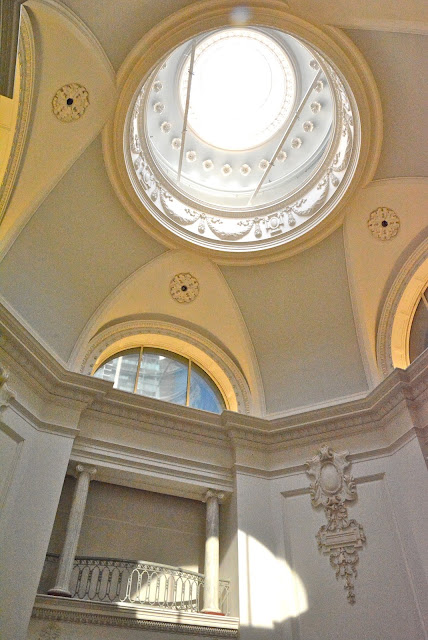 This was part of a different exhibit in the gallery that really made me think.  It is a photograph of the visiting area for families to spend time with their convict parent at Kingston Penitentiary.  Those buildings have since been demolished. 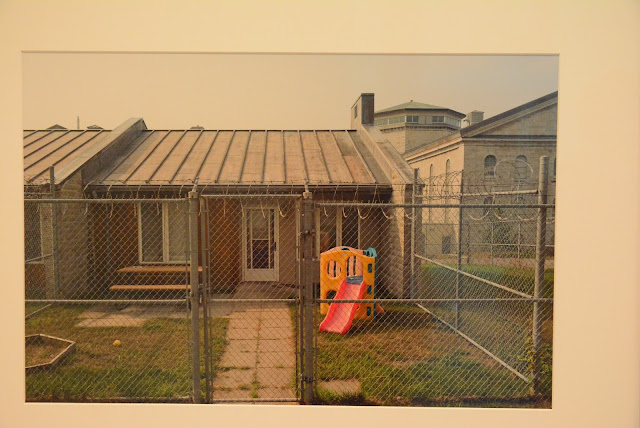 And here are the stairs that took us to and from those fences. 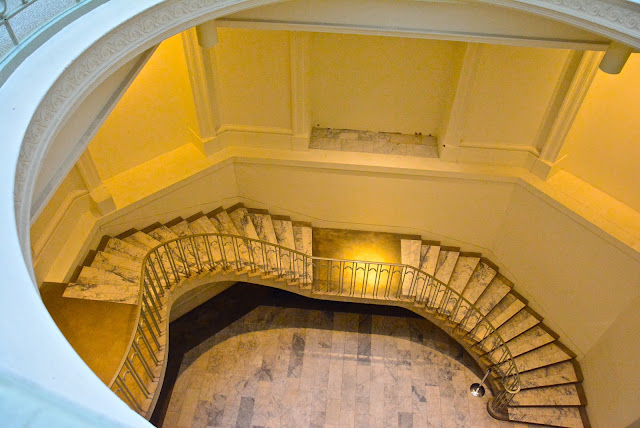 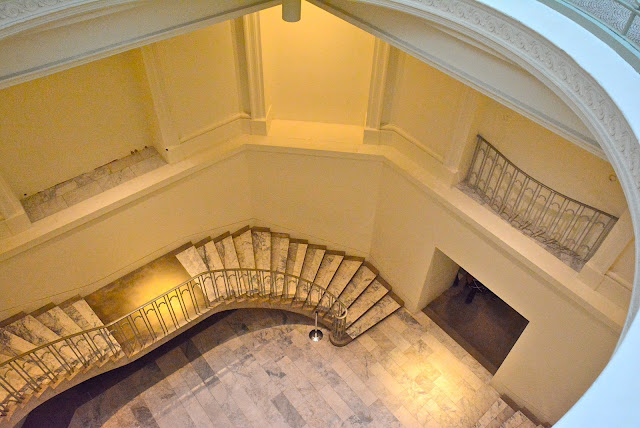 I took this shot on one of our trips around the Stanley Park Seawall.  Looking up to see cyclists going over the Lions Gate Bridge brought back commuting memories from before I retired. 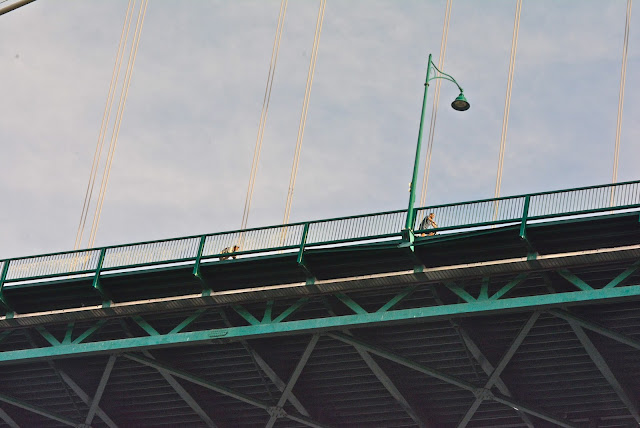 Bill and Black Jack were playing at English Bay beach when I took this shot.  Those logs are used as a sort of fence to keep dogs off the beach. :)  It made me laugh to see the 11 legs in motion. 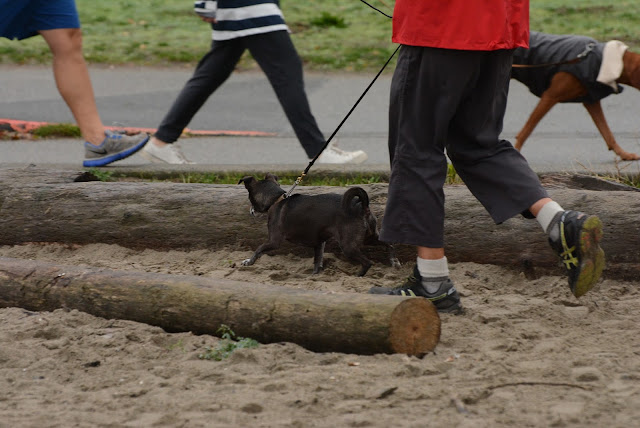 This is Bill finally played out following Black Jack.  The only way to settle her down is to pick her up or to.. 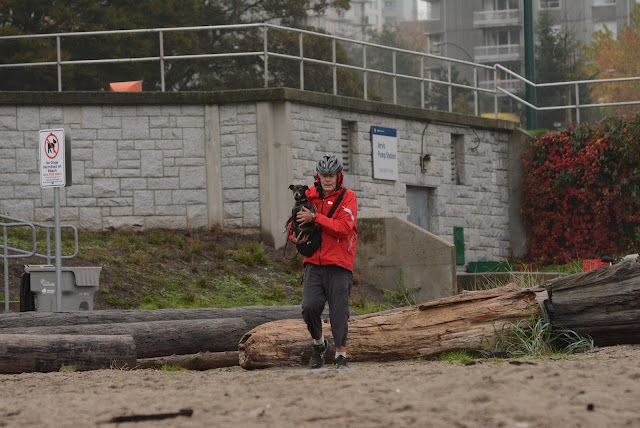 distract her from looking for critters under the logs.  We never complain about her high energy, though.  At ten years of age, it is precious.  But, man, she was really nuts that day :) 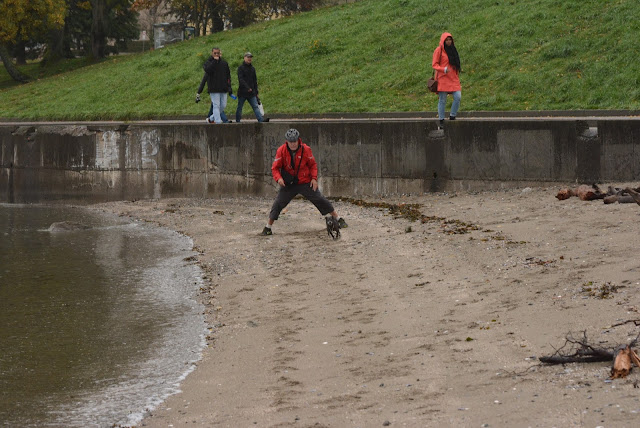 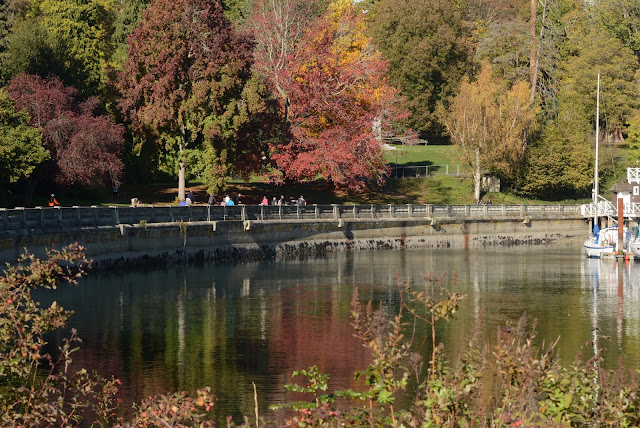 Having browser problems today, so will put the text under the above photo.  We had ridden to Coal Harbour, and one of our favorite fences was looking especially lovely with Fall colours behind it and reflected under it.  That same day, we sat and admired the horses for a while, and caught these orange details as they passed in front of us.  You can see the harbour behind them. 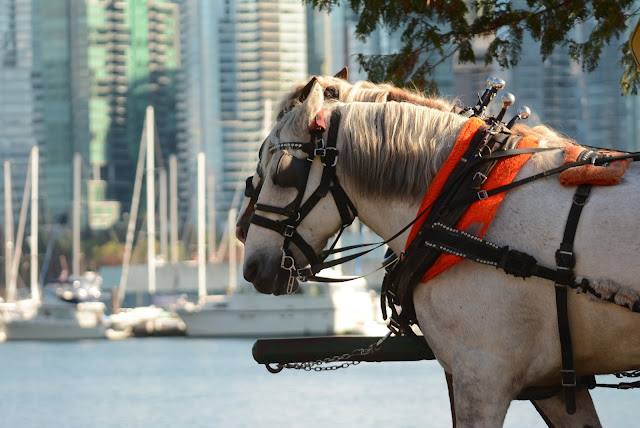 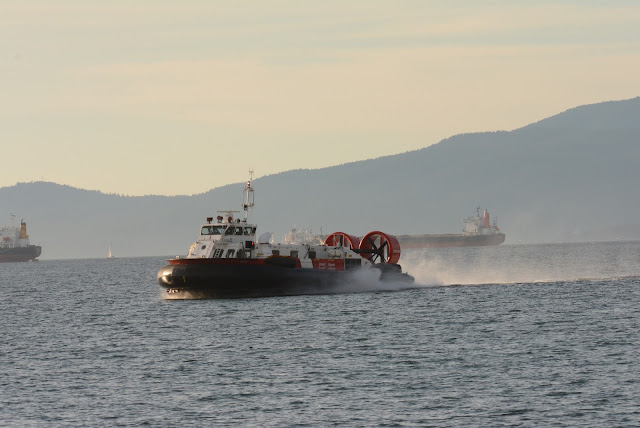 Above and below are shots of the Coastguard Hovercraft.  This was in English Bay on another day.  See?  Boats have fences too :) 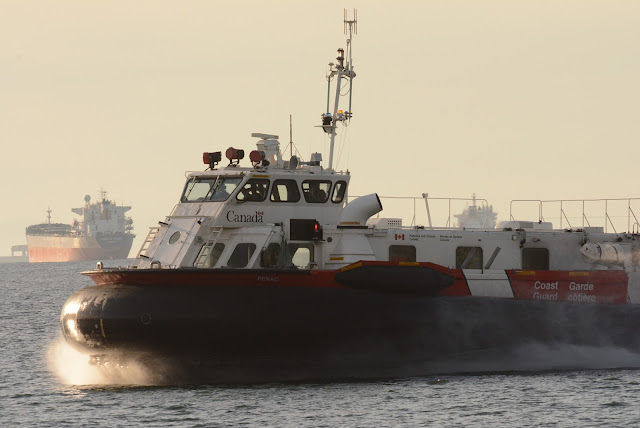 Those orange shrouds house the propellers that provide its mode of power. 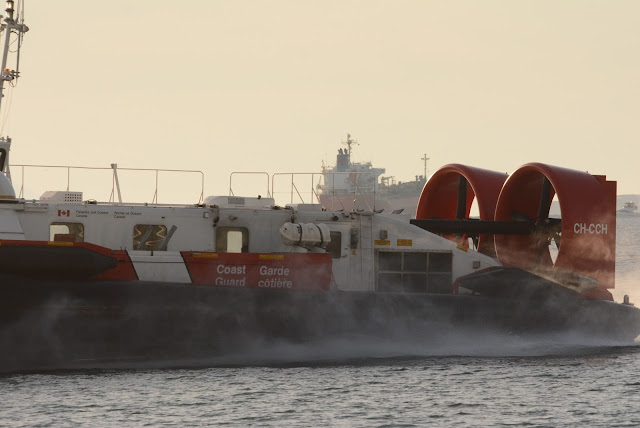 It is a fascinating piece of equipment.  This link will show it in action. 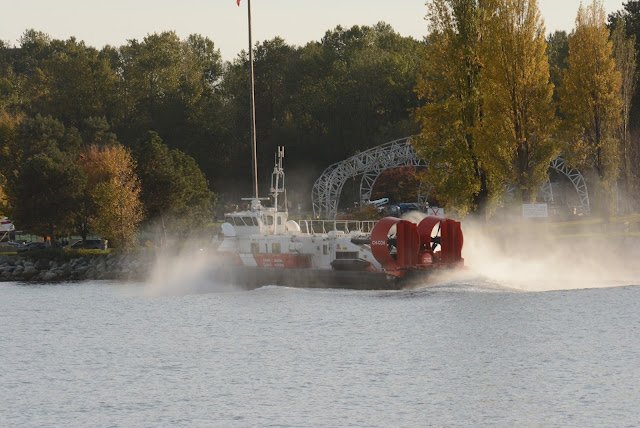 These three people doing sit-ups made a kind of fence themselves.  But if you're not convinced, the stairway behind them could stand in for a fence substitute :) 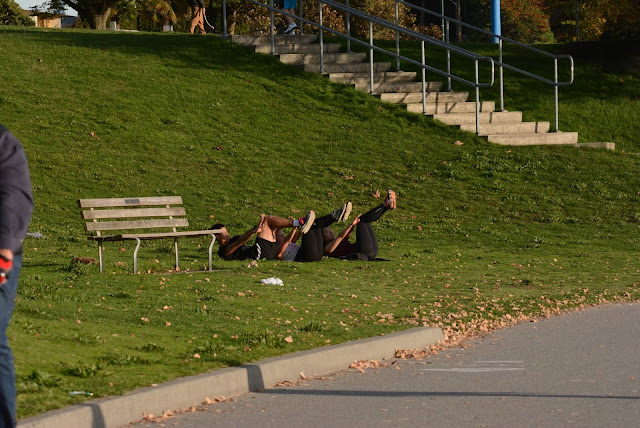 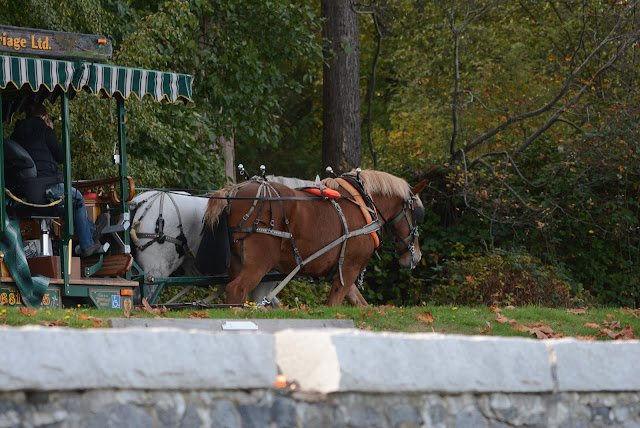 And these last shots (including the one above) were all taken yesterday.  We stopped on our way around the seawall to play with Black Jack on the beach.  As we played, the horses (same team seen a few days earlier) passed by and I shot upwards to catch them.  Black Jack, again, was hysterically happy :) 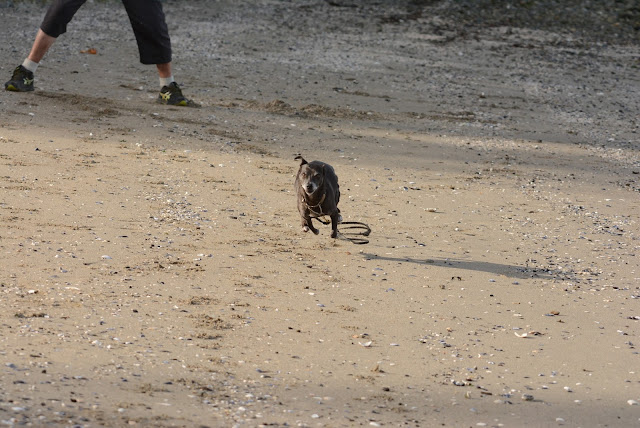 Across from us, the sulphur piles glowed in the sun. 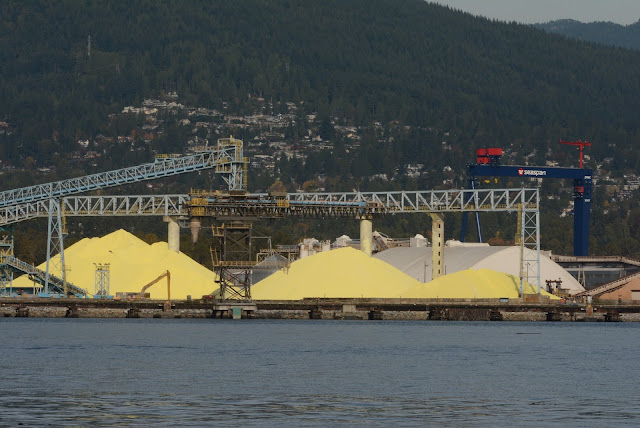 Off in the distance is the Second Narrows Bridge, and in the foreground, an orange-accented lighthouse.  Lots of fences too! 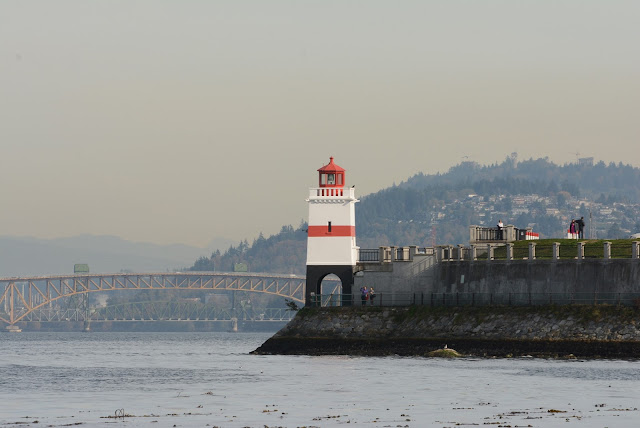 These are the steps we had to climb down to get on the beach.  They are insanely steep and so narrow, there is barely space for my big feet to find a place to rest.  Bill has no problem with them.  Just kidding :) 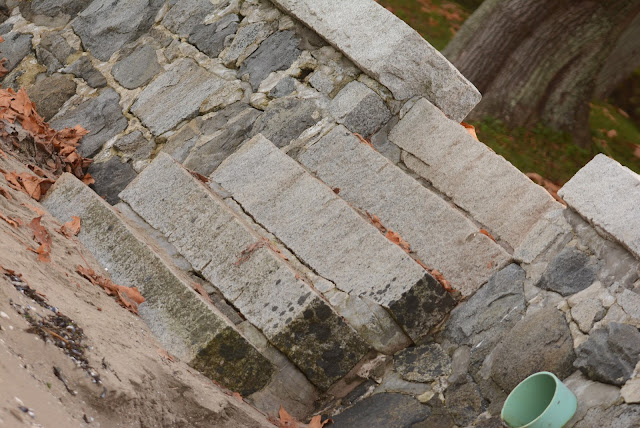 Black Jack cavorted in the fallen leaves.  It has been SUCH a beautiful Fall.  We feel so grateful, not only for the weather but for your visits.  Thank you!  Until next time! 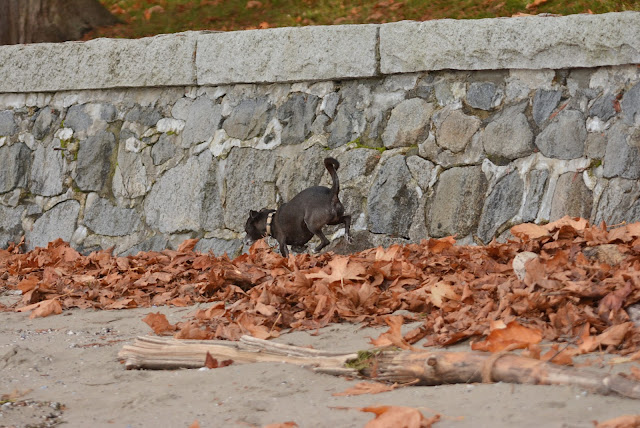