The first day of summer is here! For now, just one picture taken in North Vancouver on Sunday to mark that event. 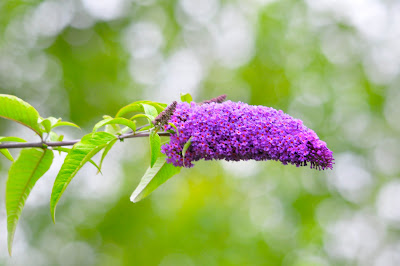 The weekend was the best kind of busy. On Saturday, a morning adventure in Musqueam Park and The Southlands and a quirky movie in the evening (Micmacs). On Sunday, a visit to the osprey lookout, some world cup soccer observations at Brazza's coffee shop, an Italian and French car show, and a quick stopover at Cates Park in North Vancouver. An opera last night (La Traviata) rounded out the weekend. There is probably material for quite a few posts, but I'm still catching up with last Thursday and Friday, so the weekend post will come in a day or two.
Thursday evening, I stopped by the osprey lookout before heading home after work. This Bushtit (I think) was busy feeding. I always love to see birds hang upside down. All athleticism impresses me, I guess because, although I'm fairly fit, my athletic talents are minimal. 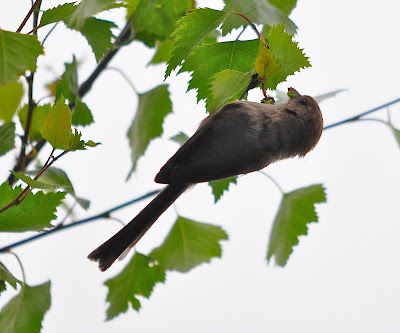 Brightly coloured flowers usually catch my eye first, but this white rose was lovely in the midst of rain-soaked green. 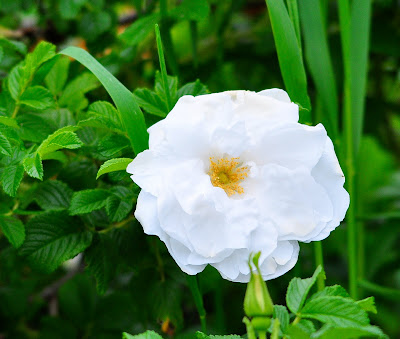 One goose chased another for a long distance across the water. Competition for feeding territory, perhaps.

Lawrence was sitting on the nest, staring intently at the water beneath him. 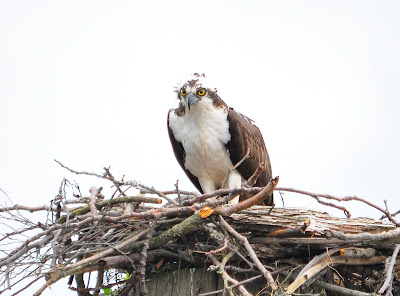 His head darted from side to side, and then suddenly forward. His eyes became even more intent, and I was fairly sure he had spotted a fish. 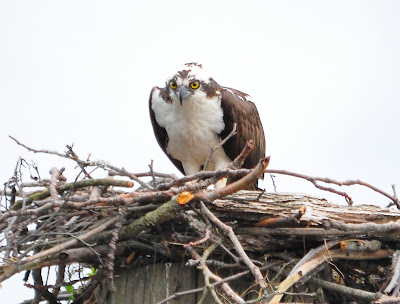 I missed the shot of him leaving the nest. It was very, very quick. The tide was still fairly low, so I think he had an easy time grabbing the fish. 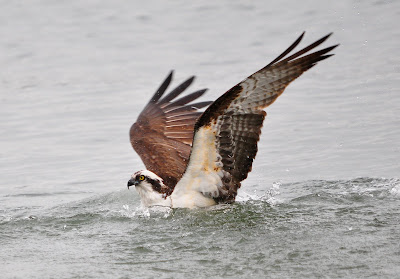 He rose up, fish in one talon, 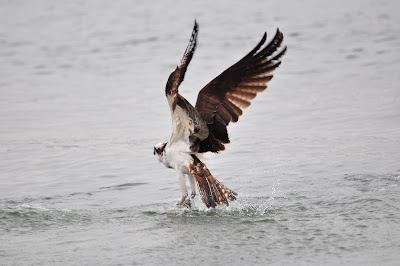 but soon arranged it for efficient transport. 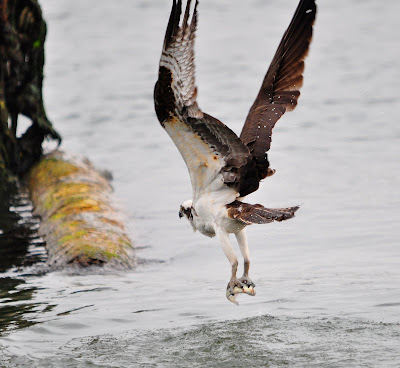 He passed by the first pylon, 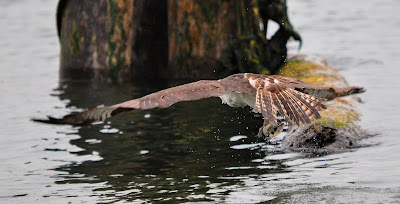 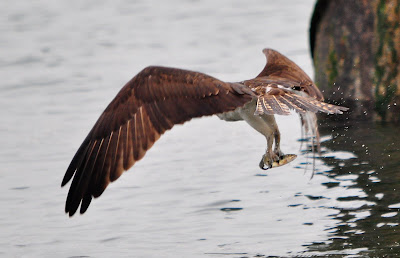 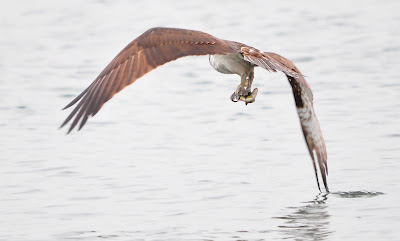 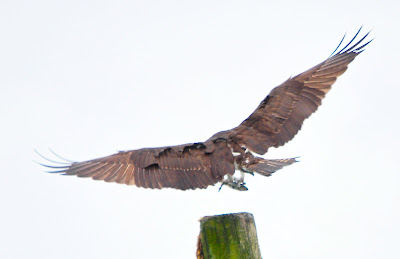 He sat for a long time, looking around. I'm convinced he was hoping elusive Olivia would be impressed with his fishing prowess and stop by to share in the spoils. When I left, he appeared to have shrugged his shoulders, conceded it was her loss, and was thoroughly enjoying his feast. 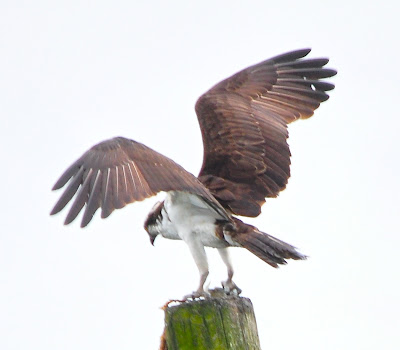 On the way home, I stopped to take this picture of a garden I have been admiring for several days. My big lens was all wrong for the shot. I hope to stop by again. It gives a little jolt of pleasure every time I pass by. 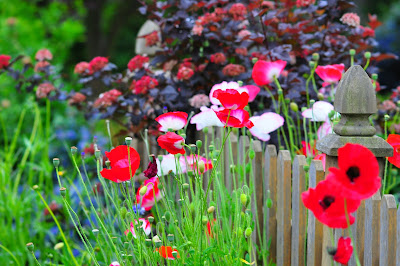 On Friday morning, I walked with Black Jack in Jericho Park. We stopped on the little bridge and a gentleman complained that he hadn't seen any baby ducks this season. As we were talking, I heard a commotion and looked down to see some baby Tree Swallows. 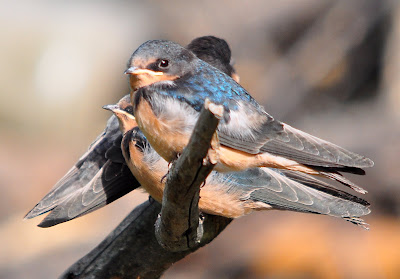 They were sitting on a branch over the beaver's home. Their mouths opened wide, 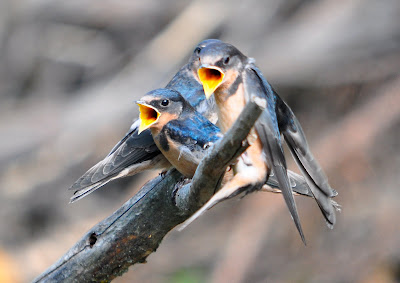 just in time for the parent's delivery. 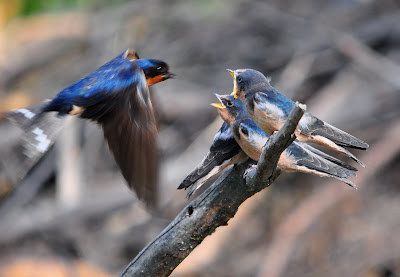 The parent sat for all of a split second, before taking off to deliver this saved insect to the two other babies sitting on a lower branch. I missed that shot, but was happy to have caught some of the action. Swallows must surely be the fastest flyers of all the birds I watch. 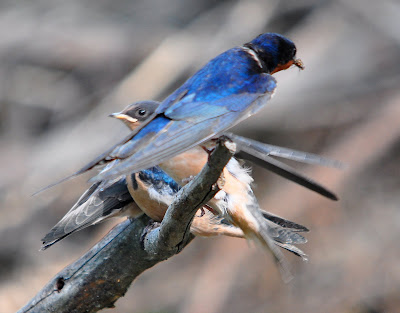 One last photo of the parent, to show its sharp little eye and brilliant metallic blue. 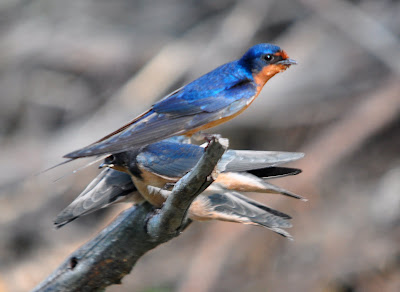 Here's to a beautiful summer!
Posted by Black Jack's Carol at 6:43 AM