On Saturday, we rose early and were off to Musqueam Park. It is just a short drive from Point Grey, but an area of Vancouver we had never explored.
Lush wooded trails kept Black Jack entertained, and some really delicious salmon berries met with Bill's approval (and mine). 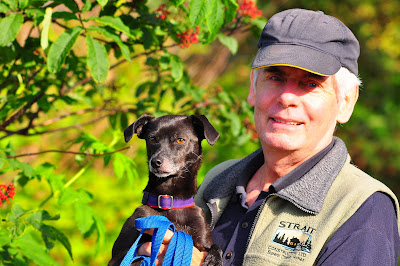 I think this Towhee may have fledged fairly recently. It called to its parents, demanding they deliver food - immediately. 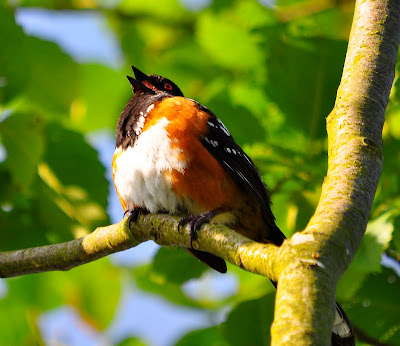 Its indignant look when it noticed me seemed to say, "Well, what are you standing there for? Can't you see I'm hungry?" 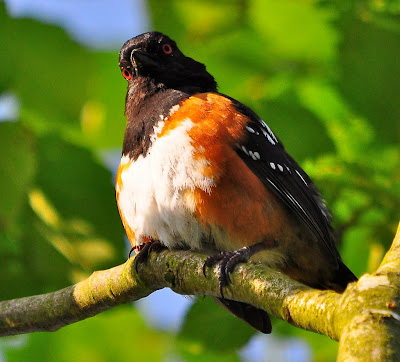 This yellow iris added sunlight to an already lovely day. 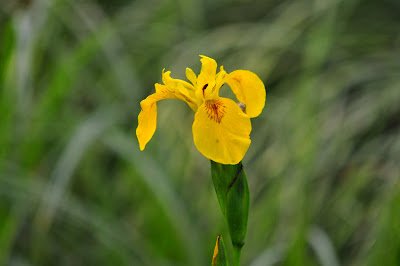 Deering Island Park and The Southlands border Musqueam Park, and as we walked around the area, I thought that the residents there have the best of many worlds. Houses with easy access to boats, 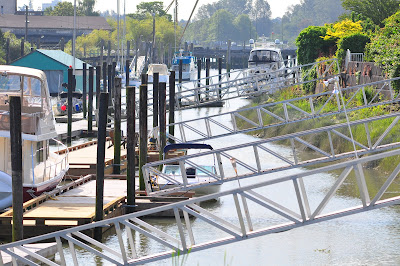 space and trails to keep horses exercised and stimulated, barns so luxurious I would be happy to own a small space in one of them, and homes so enormous, I couldn't imagine they would contain only one family. All this in the middle of a large city! 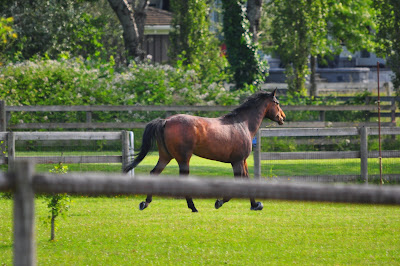 We saw these survey markers in the ground along the trails, and were astounded to read that their removal could result in a seven year jail term. Hm..... 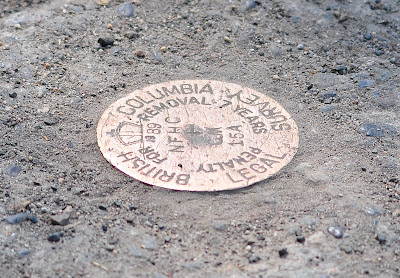 We came across this rock, and stood reading the story written by Terry Slack. It is difficult to see the story in the picture, so I've copied it for you underneath. It gave me quite a sense of the history along the Fraser River. 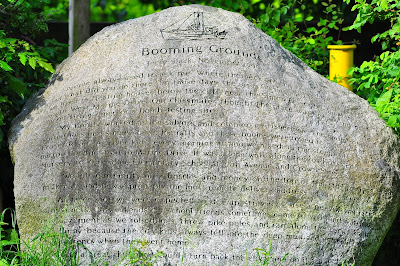 People always used to ask me. Where the heck are the booming grounds? And what did you do there? In those days it was hard to explain we lived in floating houses by the Simon Fraser monument on South West Marine Drive. Our classmates thought the place was some kind of secret firing range or bomb testing site.

My family worked as log salvors and commercial fishermen. The boom men sorted logs into single-specie log rafts and these booms were rowed to mills on the Fraser River.

We left our empty milk bottles on the top of the cliff for the milkman and it was probably the most remote delivery address in Vancouver. 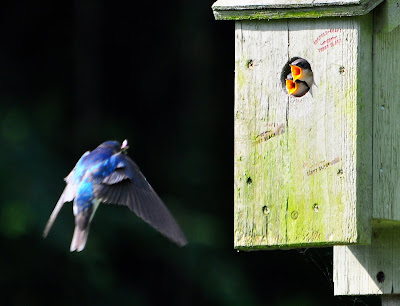 I can well understand how parents find those wide open mouths impossible to resist. 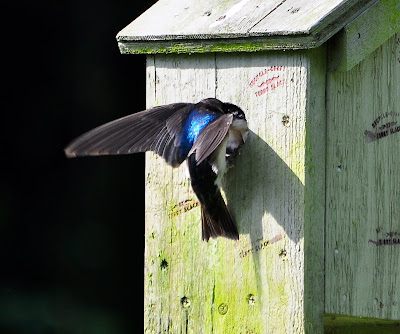 There seemed to me to be a ready supply of food in the spider web to the right, but the parents preferred catching their insects on the fly. 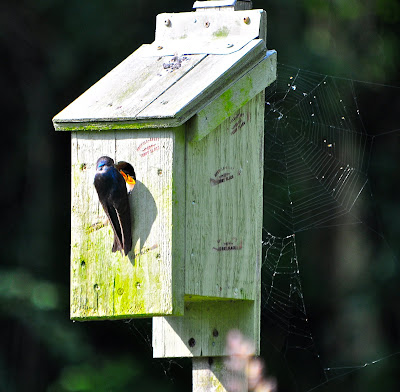 This log boom was the longest I have ever seen. Just a small section of it here. 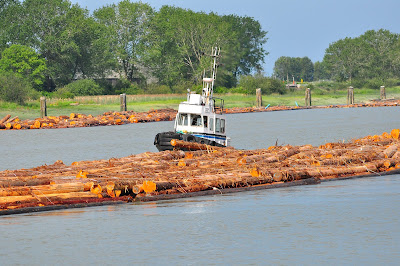 No identification of this hummingbird (any help appreciated), but I was thrilled to see it. 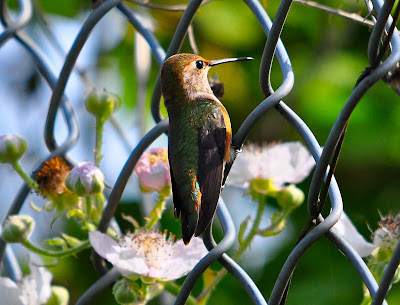 Another of many blooms along the way. 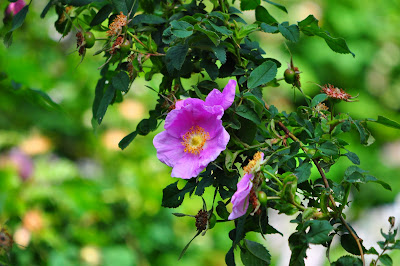 Bill, the conductor. He was sending Black Jack off on the longest free run she has had yet. 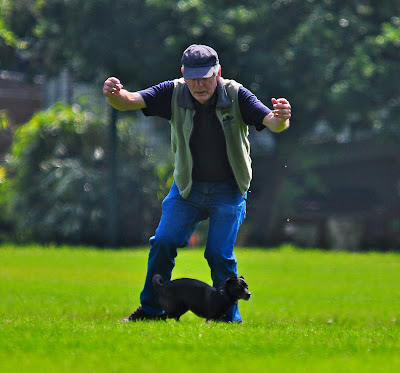 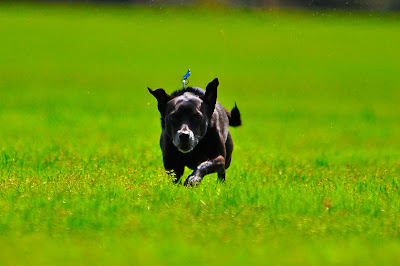 Muzzle and ears drawn back by the wind of her energy. 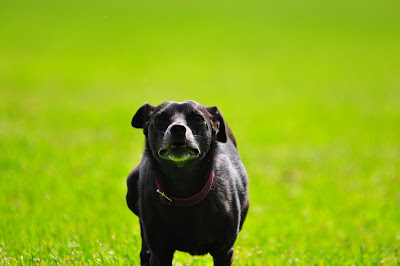 Grinning as all four feet leave the ground. 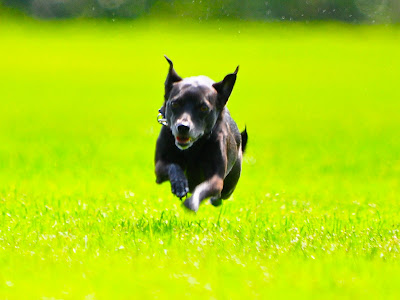 There are still Sunday's adventures to post, and some recent osprey "soap opera" observations, but I am out of time, and this final bloom as we drove home will conclude the Saturday post. Thanks for taking time to read it. 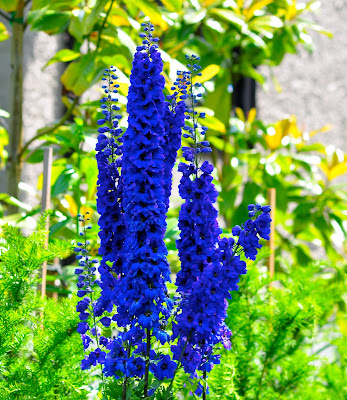