I have a feeling the osprey story in North Vancouver is about to change significantly, but here is my update as of Friday evening, July 2nd.
To fill in anyone who may be a new reader, I have been following two osprey nests: 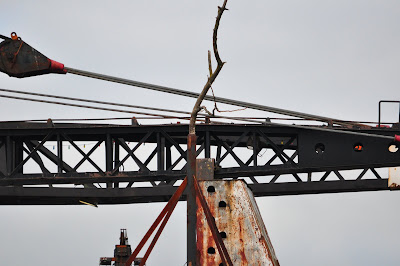 So, why are things about to change? Well, on Friday evening, when I stopped by on the way home from school, this pile driver was being set up. I didn't know what it was, but Bill explained its purpose, and told me they make a terrible noise. There was no sign of Lawrence. I checked again the following morning, but again, not a glimpse of Lawrence. 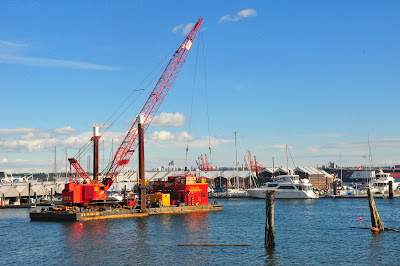 This barge, full of logs was brought right up to the side of the pile driver, and my guess is that, perhaps, the marina is going to be expanded. I am sad about this. Last summer was such a rich one, with up to 40 seals basking on floats in front of the marina, very active ospreys, and all kinds of wildlife regularly swimming or flying by. When the floats were removed, most of the seals left, and now, I worry about the noise of the pile driver, and fear that the remaining wildlife will flee the area forever. I hope I'm wrong. 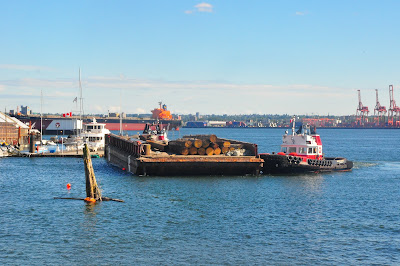 These next two pictures show the last time I saw Lawrence. It was on Wednesday, June 30. I didn't see Olivia that day, but Lawrence was continuing to fish and to bring sticks in to the nest. 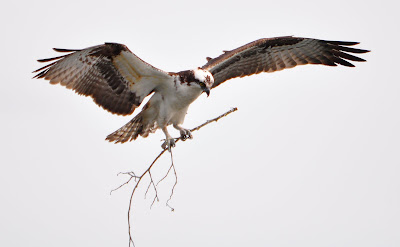 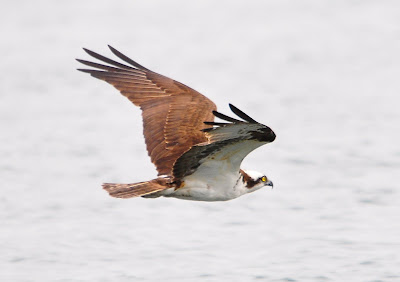 The next pictures were taken on Thursday, the 24th of June. Jonny is just flying onto a ship perch, where he watches over the chicks while Olivia flies down to the river to take a bath. 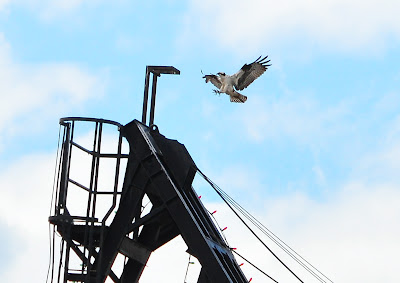 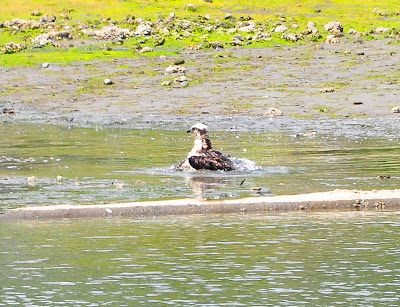 I was a long distance away, so the photos are poor, but here, Jewel finishes bathing, and takes a piece of seaweed with her, as she flies to a perch.. 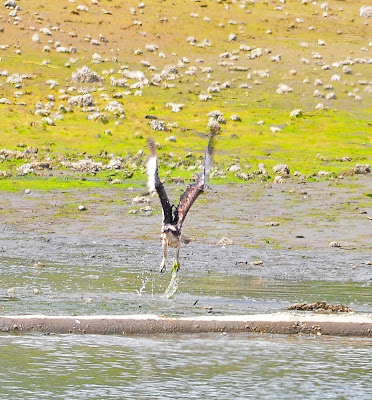 ..on the crane, where she dries off a little bit. After a moment or two, she heads.. 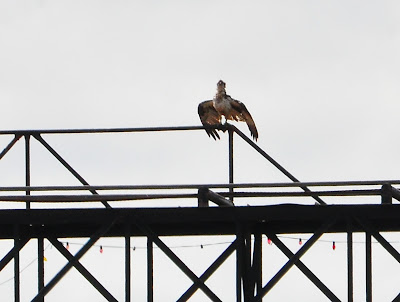 ..to the nest, where I suspect she used the seaweed and her still wet body to cool off the chicks. The sun had been strong that day, and shining directly into their very exposed home. 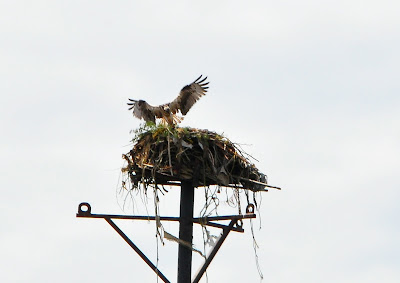 This next set of pictures were taken on Friday, June 25th.
Lawrence did a wooing dance, very high in the sky, with a fish in his talons. 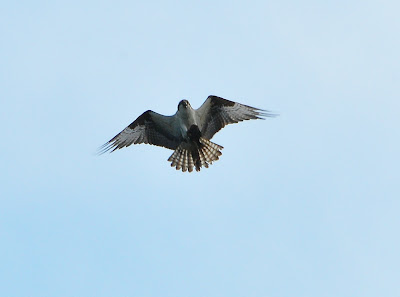 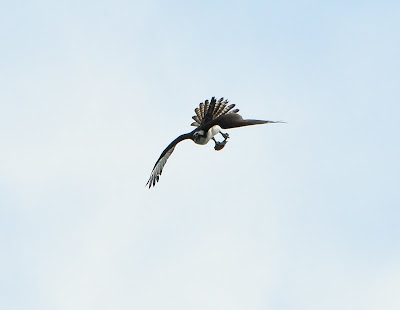 He landed in the nest, and a few seconds later, 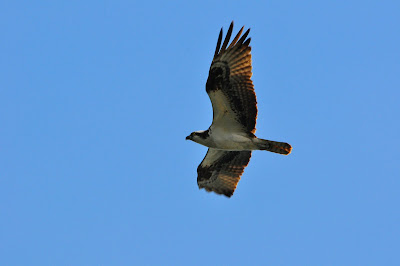 She landed in the nest beside Lawrence, but only stayed for a moment or two, before flying off. 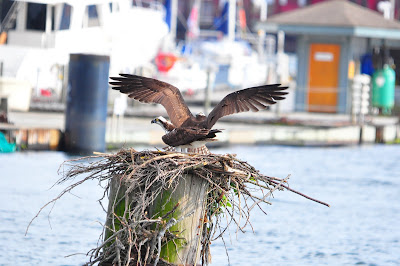 Lawrence flew after her, still holding the fish. I didn't see them again that day. 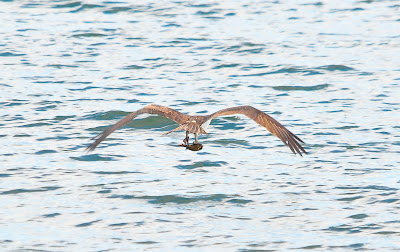 The next two photos are of Jonny and Jewel. The picture is poor, but shows Jonny's missing feathers in the right wing. He lands (with a fish) in the nest beside Jewel, 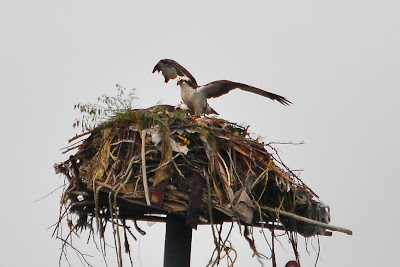 and seems to show interest as she feeds the chicks. 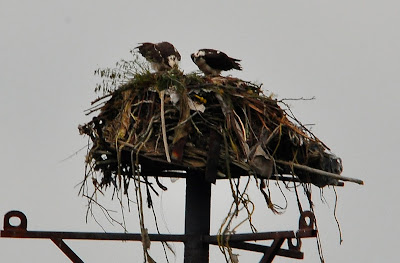 The rest of the pictures in this post were taken on Sunday, June 27th. That was the last time I saw Lawrence and Olivia together. In the morning, the tide was out, and I was able to get some close shots of Lawrence working on the nest. 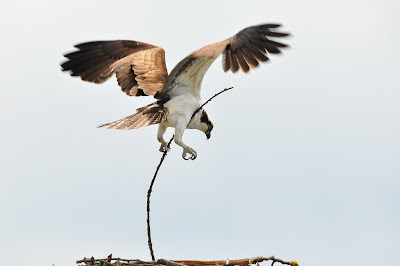 This stick had quite a curl in it. 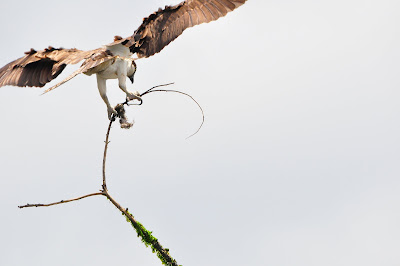 It was comical to watch Lawrence try to arrange it correctly. He had such a look of concentration on his face. 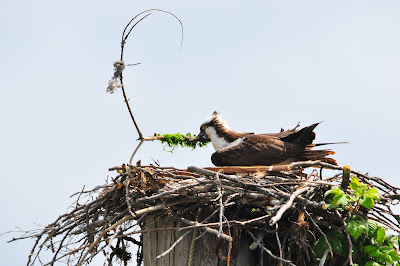 This piece of bark was so large, Lawrence's face was almost completely hidden. It is really interesting to see the variety of materials that go into the building of a nest. 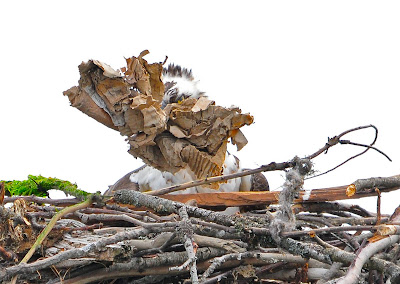 I came back later that afternoon, and was amazed to see Olivia perched beside Lawrence. 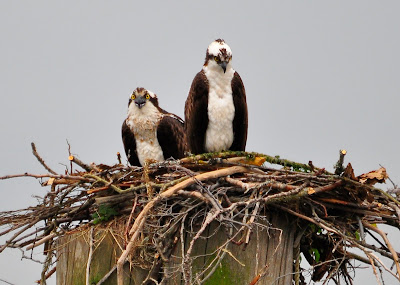 She called and called in a very persistent voice. He tried his best to find a fish, rarely taking his eyes off the water. (Please forgive my unabashedly anthropomorphic interpretation of events.)
Hurry up and get me a fish. 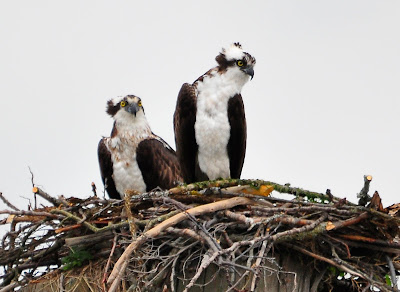 Suddenly, she moved to the back of Lawrence, neck darting from side to side.
All right. I'll catch my own fish. 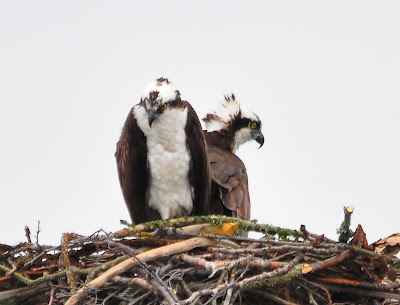 Lawrence appeared desperate to please her. He flew off, I assumed, to look for a fish elsewhere.
I had better do something. She's awfully independent! 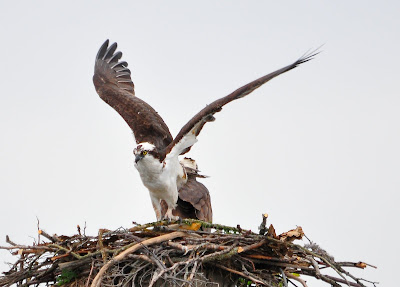 Olivia flew away a second later.
I can't hang around all day waiting for him. 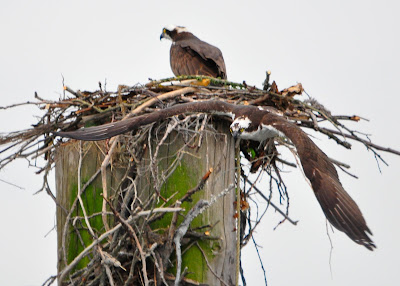 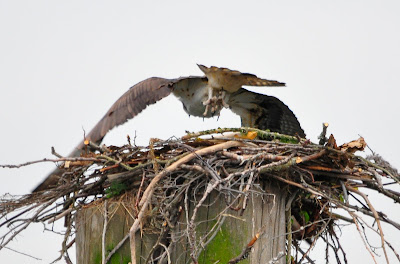 Lawrence came back to the nest, and appeared to be dejected that Olivia was gone. He had not managed to find a fish, and brought a small stick instead. 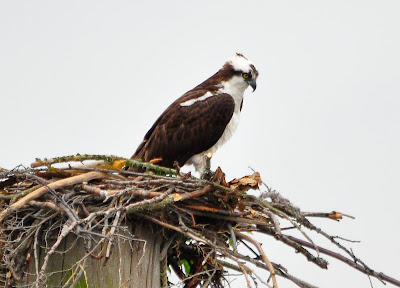 There you have my osprey update. Weekend adventures to follow soon. Thanks for reading and have a good week!
Posted by Black Jack's Carol at 9:50 AM