I had a grand plan to do three posts concurrently, one to update the osprey story, one to update the eagle story, and another to fill in some of the other notable moments in my life. I loaded pictures, but couldn't seem to get to the commentary, and in the mean time, life continued and there were more photos, and finally, it seemed impossible to catch up with the blog.
One step at a time: here is the osprey update:
In my last post, I feared the marina was being extended, and that the pile driver and noise would drive Lawrence and Olivia away from the area forever. I am happy to say I was wrong on both counts. The city was in fact putting in pylons to contain a more or less circular arrangement of logs, similar to the arrangement I had grown to love last summer, when up to 40 seals used the area to rest and bask in the sun with their babies. I'm not sure of the purpose for this arrangement, but guess it has something to do with improving conditions for the boat owners. Sadly, the pylons they have put in seem to be metal (last summer, they were wooden), and there are pointy white tops on them, I guess to discourage any more nests. I am pleased to see that the pylon with the osprey nest was left untouched, but the second pylon where Lawrence used to perch to eat his fish, has been removed. Here is the scene as it looks now. You can see the nest in the bottom right hand corner. There is not much of it left, after a severe wind storm a few days ago. Way over on the left side, you can see what appears to be a bump on a log. That is a seal, and there are a few others nearby as well. More about the seals later in the post.
*Double click on the photo to enlarge it. Use the back browser to return to the post. 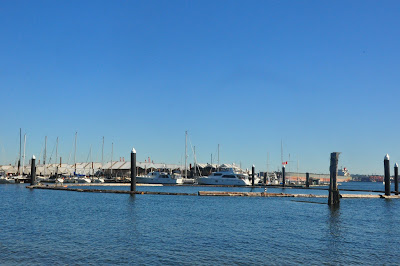 The pictures cover a period of about two weeks, beginning from the most recent. This one shows Lawrence on Thursday. He brought a stick to the nest, in what appeared to me to be a half-hearted attempt to rebuild after the windstorm. He then flew off, and I haven't seen him since. 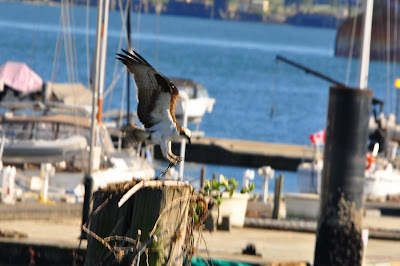 This picture is of the nest in the shipyard. Jewel has just received a fish from Jonny, and is feeding the chicks. It is always difficult to get pictures of this nest, because it is so far away, but for the first time, we get an idea of how much the chicks have grown. 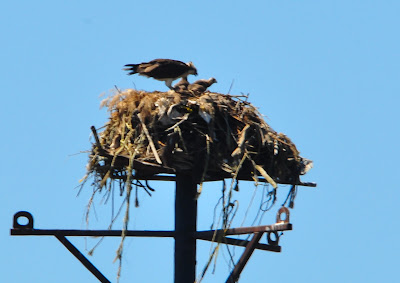 On Tuesday, Lawrence and Olivia flew together, and I have to say, my heart soared with them. It was sometime mid-morning when I heard Lawrence calling and doing his dance, very high in the sky. All of a sudden, there was Olivia. Here, you can see her "necklace" quite clearly. 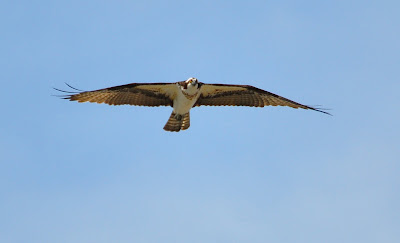 Another shot of her. I thought she was looking particularly beautiful. A gentleman named Michael was also watching her, and told me that she has another nest. He didn't tell me the location but he said that she and Lawrence have at least one chick in that nest. I am not sure that he is correct. It seems to me she wouldn't have been flying with Lawrence if that were the case. I have seen Jewel, from the shipyard nest, leave for about five minutes at a time, but Jonny always seems to take over the watch when she does that. 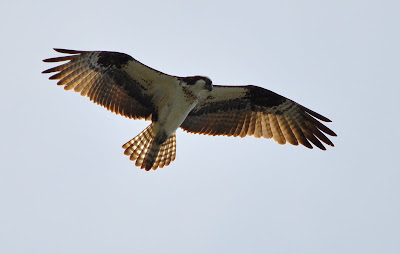 I've thought quite a bit about how much guesswork all of us do, to try and figure out what is happening with the ospreys. I describe how I see things, but who knows how close to the truth I manage to come. Here, Lawrence has just left the nest, taking his fish with him. Michael feels, and I tend to agree, that Lawrence preferred this nest, but has failed to convince Olivia to raise her chicks there. I wonder if that is because their mating (which I witnessed several times) did not "take" or whether she chose, as Michael says, a different location because of all the photographers and people who gathered around last year to watch her with Lawrence and Rose (their chick). 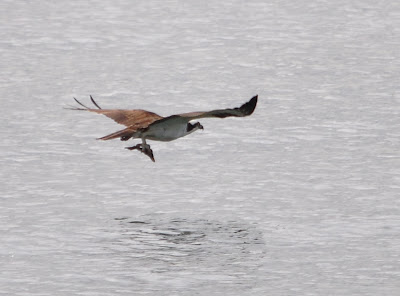 My apologies for these poor photos, but what they prove is how wrong I was that Lawrence would be afraid of the pile driver, barge full of logs, and all the activity around the marina. Here, he works on the nest, using a piece of rope that he has stolen from the barge. 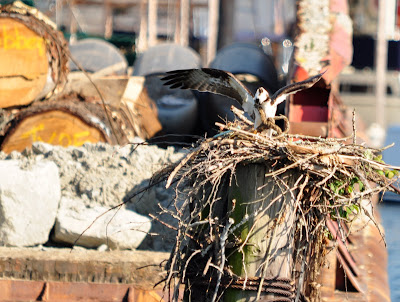 The nest was really beginning to look rather fine, I thought, but that was before the windstorm. Another of my discoveries over these past couple of seasons of bird watching, is what a steep learning curve it is for young birds to get everything right in terms of preparing to raise a family. 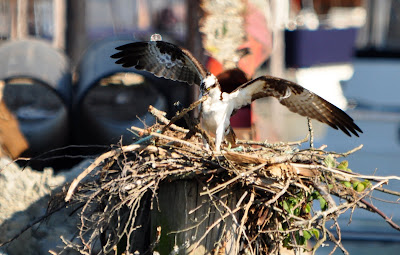 Here, Lawrence flies onto the barge, I think hoping to pull some useful bark off the logs. 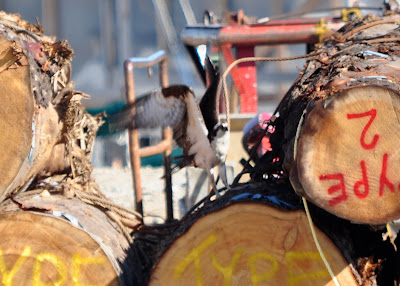 He deposited his find in the nest, and then flew right towards me, as I stood at the lookout. 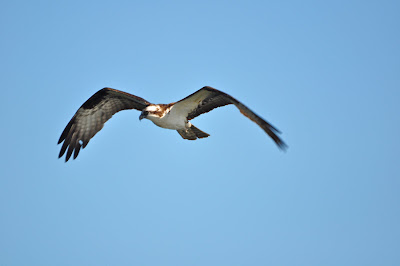 Over my head, and too close to get all of him in the viewfinder. Lawrence, in my opinion, is not afraid of people. If some observers are right in their guess that he is the offspring of Jonny, then he would have been raised in that shipyard nest. That could possibly account for his easy familiarity with both machinery and people. 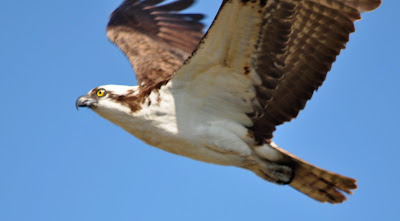 When the crane was by the nest, Lawrence thought it made a fine lookout. 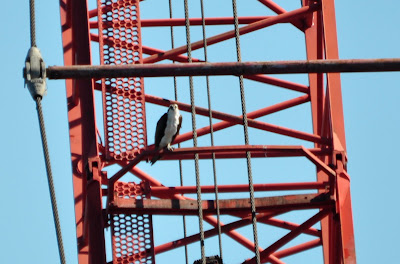 Here was the scene before the work was completed. You can see the pile driver and crane, the nest, and also the second pylon behind it, where Lawrence used to eat his fish. I wish they had left that pylon.

A happy outcome. The seals are returning. This fellow waved at me! 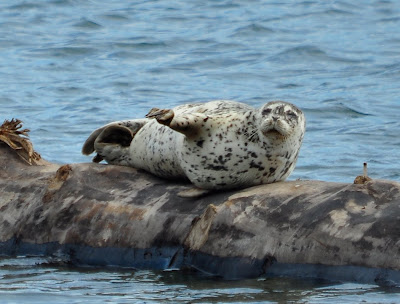 The rest of the pictures are taken about two weeks ago, and show Jonny, Jewel and their two as yet unnamed chicks. Here, Jonny brings a fish, Jewel wonders why it took him so long, and the chicks just show their tiny heads above the nest. 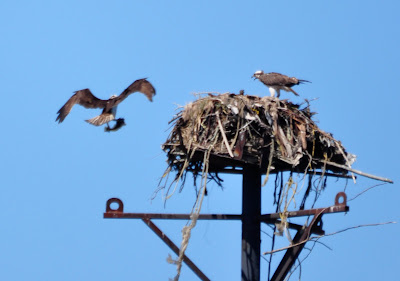 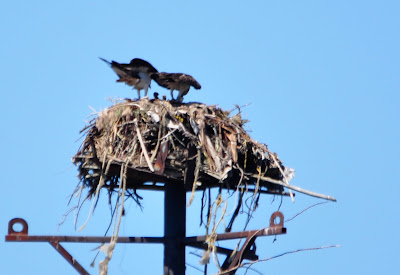 Missing feathers on Jonny's right wing do not seem to bother him. 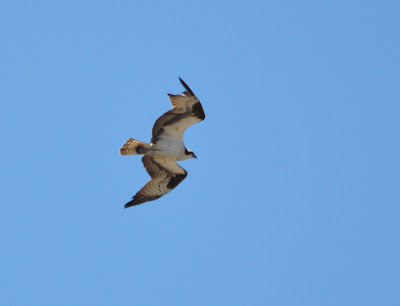 Jewel leaves the nest for a five-minute break. She flies by the river, does a little dip, 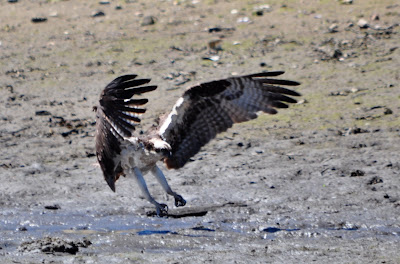 and then makes her way past the crane, and 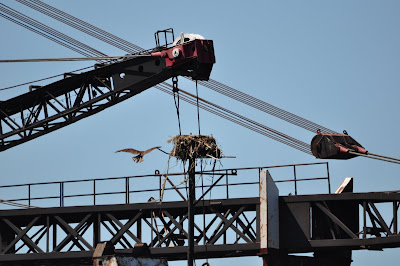 back into the nest. Two little heads peer up at her as she prepares to land. 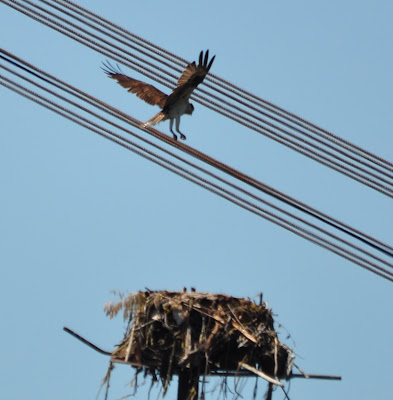 There you have the osprey update. Eagles to follow next.
Posted by Black Jack's Carol at 9:00 AM