Knowing that the letter "P" was coming up for this week's ABC Wednesday, I decided to keep an eye out for situations that denote PLAY as I went about my daily walks and activities.  I soon realized that an initial attraction to an  activity that feels PLAYFUL is often followed by a desire to PRACTICE to PERFECT the talent that led to the original enjoyment.  This is a lot of fun, but improving even the greatest of ability requires PERSISTENCE.

This is Warren.  He is an instructor at Steve Nash Fitness World, where I go for classes several times a week in an effort to build up my PHYSICAL strength, so that I can continue to play happily in my retirement.  One day, I noticed that Warren stayed after teaching his class to practice some dance/gymnastic skills. 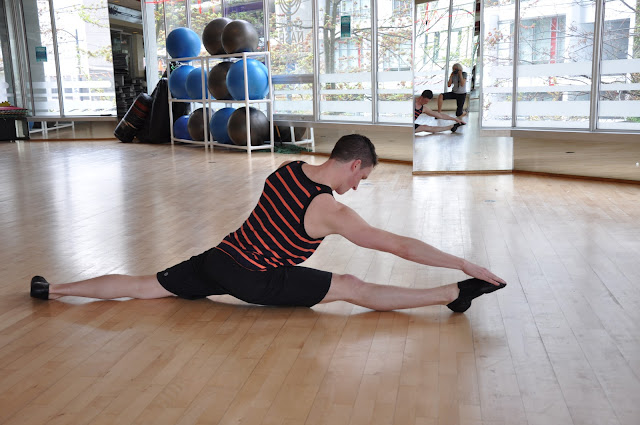 One of my new PASSIONS is PHOTOGRAPHY.  I have been playing with it for a couple of years, but since my recent retirement, I have decided to try to improve my understanding of how cameras work and what it takes to create an interesting PICTURE.  Bodies in motion, whether they be human or from the world of wildlife really fascinate me, so I gathered my courage to ask Warren if he would allow me to take some photos of his practice session. 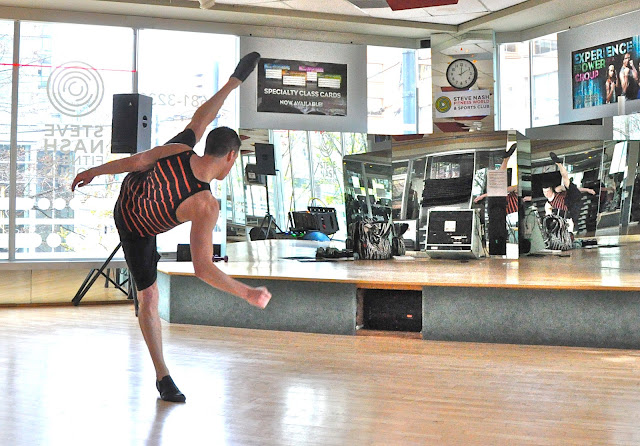 Warren was very kind and allowed me to experiment with my camera.  I was so in awe of his talent that it was hard to concentrate. 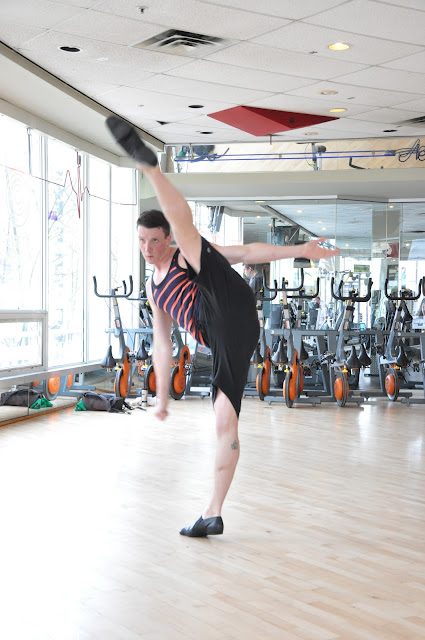 Although I see a lot of room for improvement in these photos, I am also really happy to have captured something of Warren's desire to push his physical boundaries. 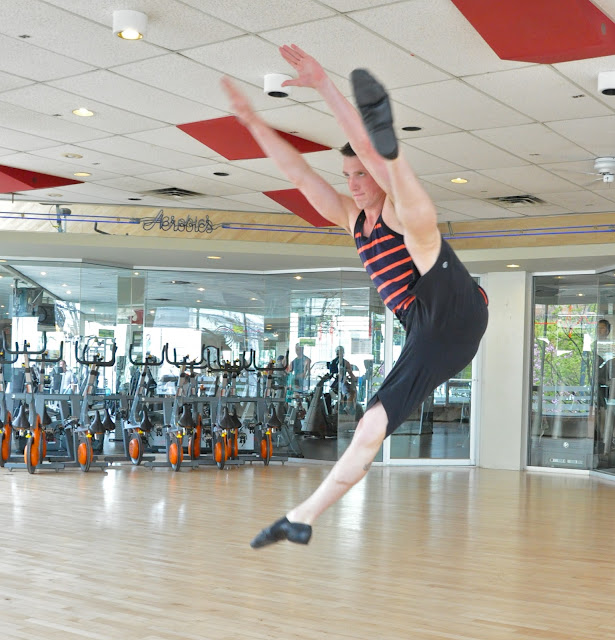 The POWER in this jump just blows my mind.  Look how close he is to the ceiling! 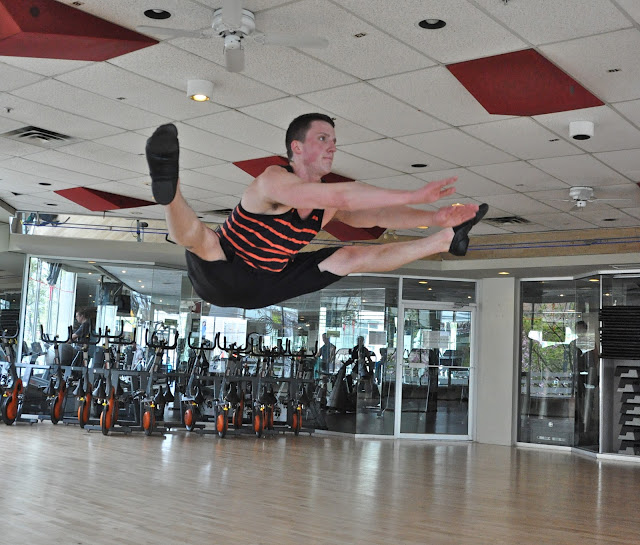 Here, Warren is doing a complete flip, but his hands never touch the floor.  It is a PHENOMENAL accomplishment.  I was disappointed that I didn't ever capture a.. 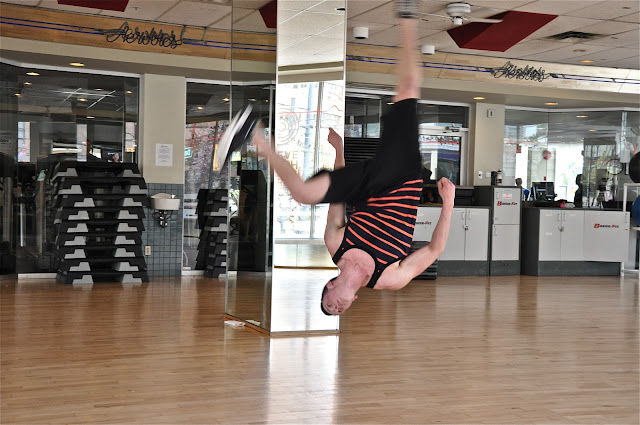 perfectly focused shot, but the best part of this experience is that he is willing to give me another chance.  I hope, in the future, to be able to show you that I have improved my skills just a little bit past the playful stage of photography.  In the mean time, my heartfelt thanks and admiration go to Warren! 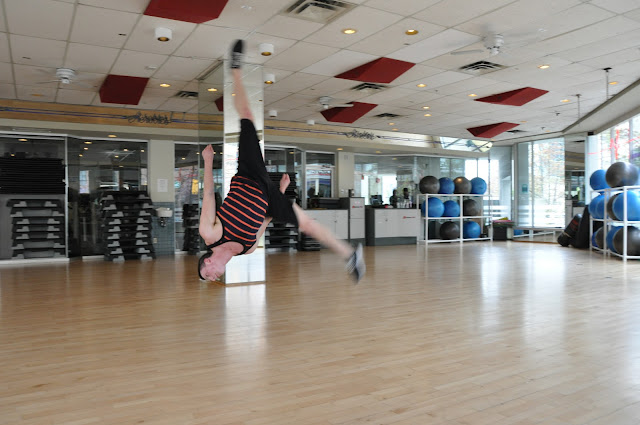 Another day, I was walking along Beach Avenue, when I heard screams.  I wasn't sure if they were inspired by fear or joy, but when I approached, I realized I was witnessing another form of play.  These girls were riding down a hill on a skateboard.  It was quite obvious that they were doing it for sheer fun, and that they hadn't practiced their skills at all.  I had my 500 mm lens on my camera and was able to catch some shots from a distance.  I watched them with mixed emotions, but overall, was happy to witness their unabashed sense of fun. 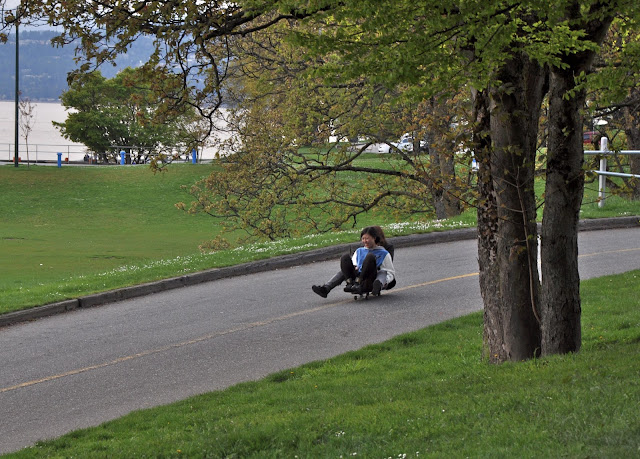 They began to gather some speed at this point, and as they veered onto the centre line, 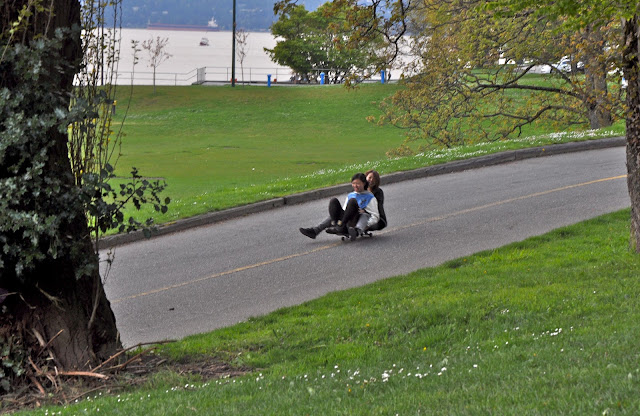 I worried a bit that they would crash into oncoming cyclists.  Fortunately, no cars may enter this road. 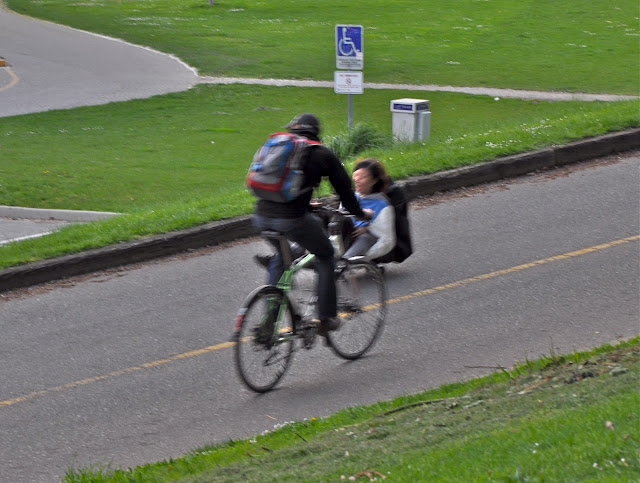 PHEW! They made it! 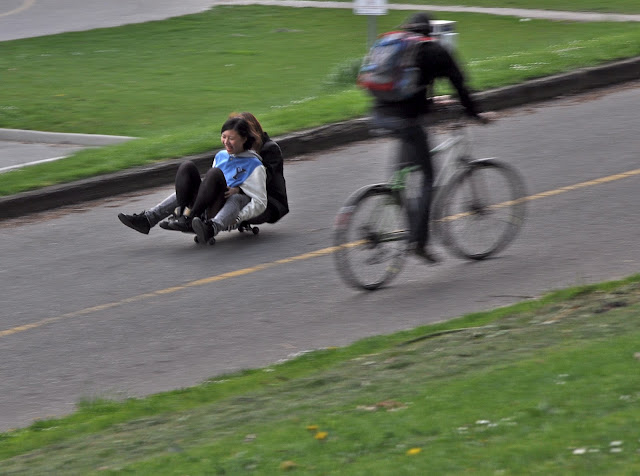 Now, they are really picking up speed, 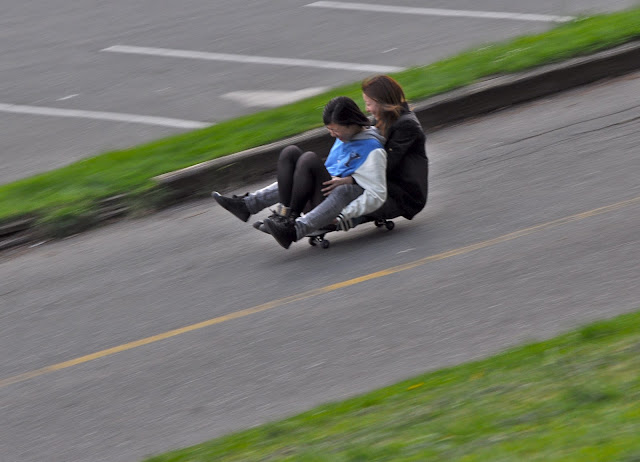 but fortunately, seem to be holding their own side of the road. 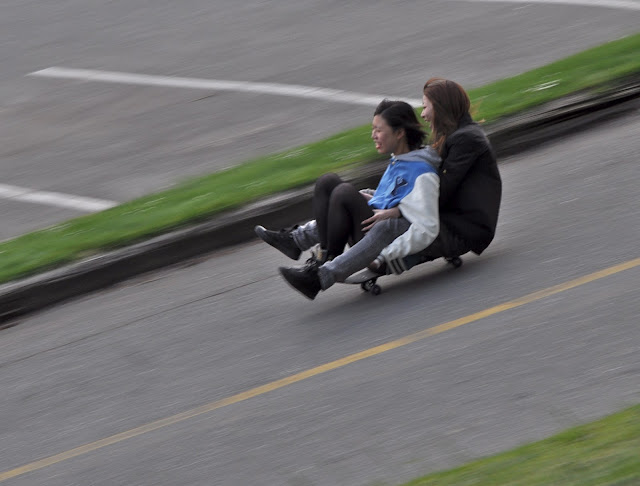 Whoops!  The girl in the front has lost confidence in her partner, and decides to.. 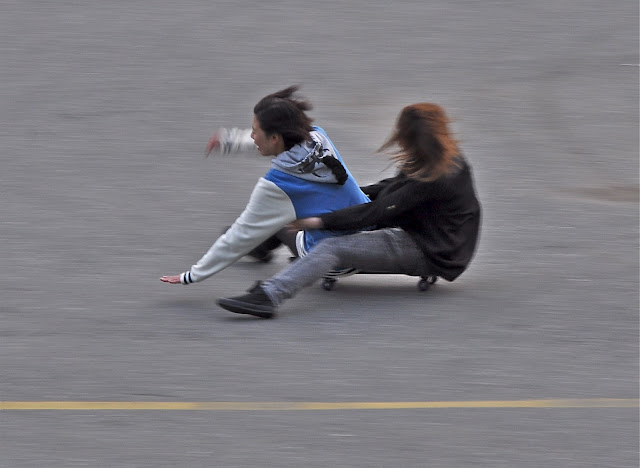 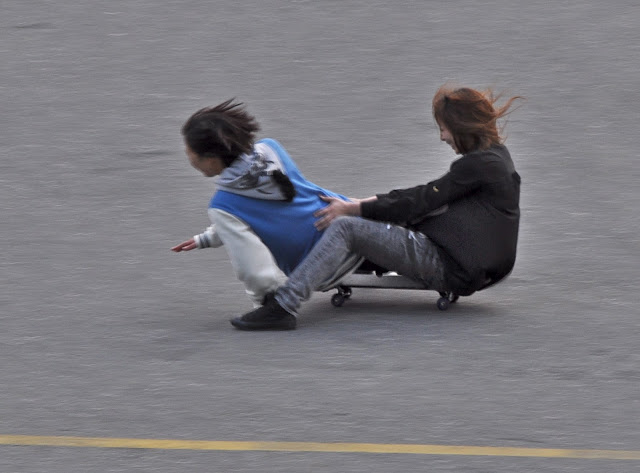 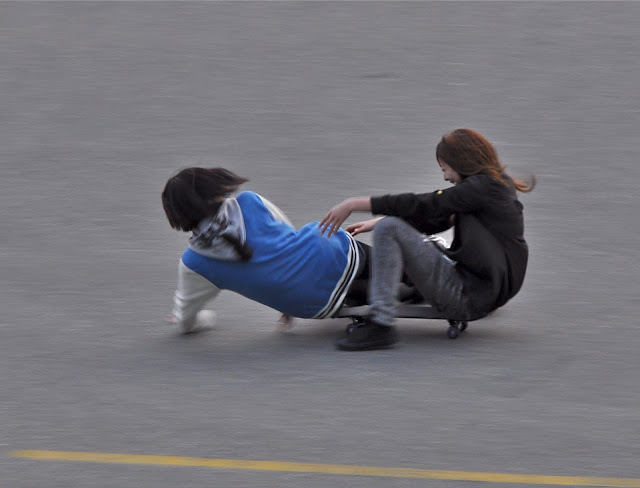 and a large hole in her jeans here (not shown).  I did not show their actions after this, but mostly, the girls were fine.  Just some scrapes, but lots of scream/laugh sound combinations that told me they enjoyed their playful experience and will probably talk about it and remember the fun they had for a long time to come.  They saw that I took the photos, and smiled their encouragement, so although I didn't get their names, I feel they would approve of this post.  The quality of the pictures leaves a lot of room for improvement, but I am happy that I responded quickly enough to capture this playful moment.  Perhaps I should remind my readers not to try this at home unless you take a bit more care to provide for your safety.  Still,  I have to say that the girls have my admiration for following through on their love of play. 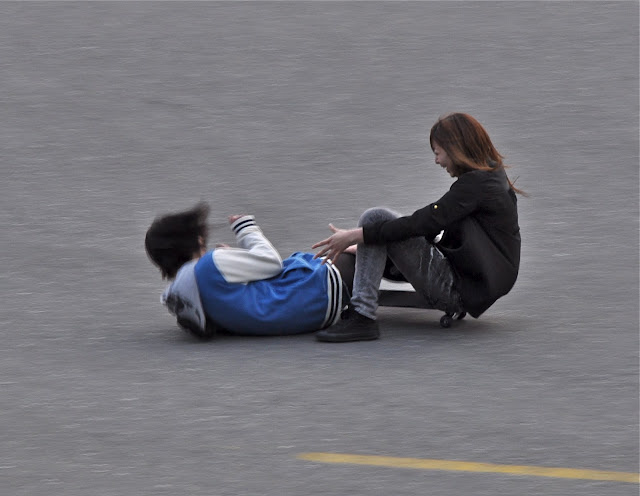 This next story in my week didn't perfectly fit into the play theme, but it sure used some p words, and it inspired a lot of thought as well, so I include it here.  I was walking along Davie Street when I noticed this young man.  He, in turn, noticed the camera hanging from my neck, and quickly drew himself together to say as I passed, "Wanna pic of a pug for two bucks?"  Black Jack, my Pug-Chihuahua-mix rescue dog, was with me, and he had thought of a photo opportunity that would make us both happy, or at least one of us happy, and the other two dollars richer.  I said no thanks, but his smile and his gentleness in spite of his best attempts to denote a powerful PERSONA stayed with me.  I walked another two blocks but couldn't get him out of mind, and finally turned around and went back to take him up on his offer.  As it turned out, Black Jack was too busy exploring the sidewalk around him, and I eventually cropped her out of the photo, but the young man's face is one I won't forget.  It was the gentle heart under the exterior that continues to play itself out in my mind.  I hope he returns to a time when play was just that, and not contrived to make enough money for the beer he told me he was hoping to buy.  All the best to you, young man, and thank you for allowing me that glimpse of your POTENTIAL beyond the street. 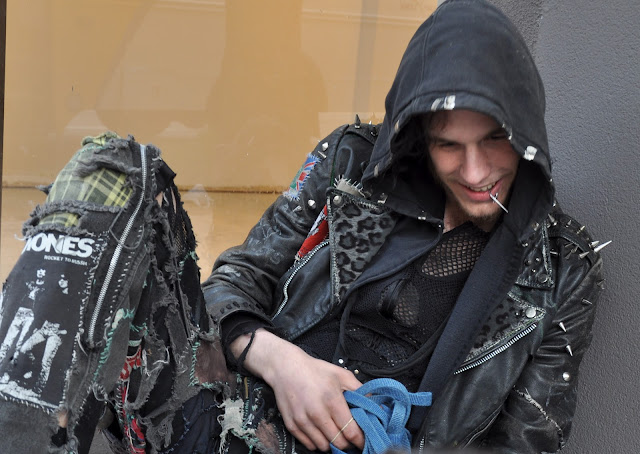 These next three photos were taken several months ago, but they have such a sense of play in them, I feel they must appear here.  This is a Vancouver busker by the name of Ralph Shaw. 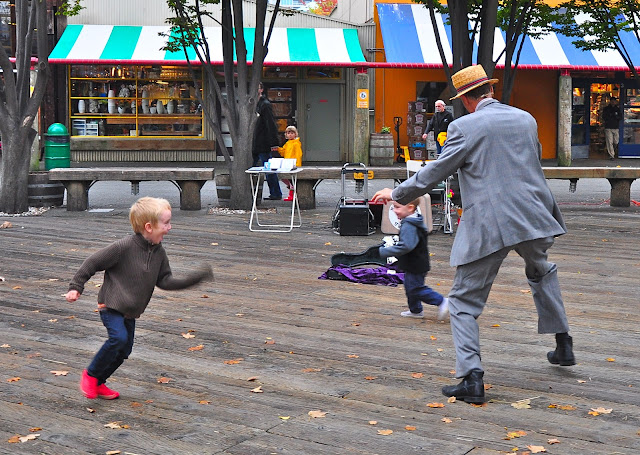 Kids know that he understands play. 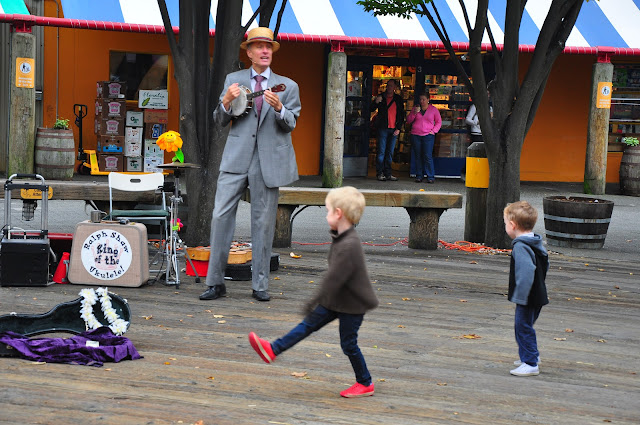 Age is of no barrier for those special people who truly get what play is about. 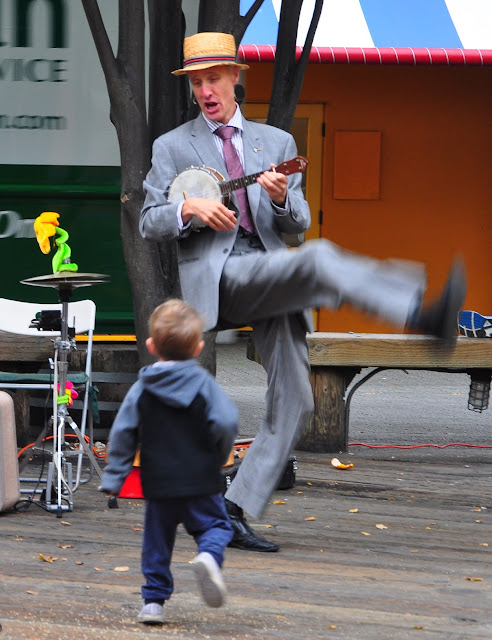 Here is one picture of a tulip that I played with this week, to show perhaps some improvement in my photography.  I photoshopped just a little bit in the left hand corner to add some blur to the background, trying to create a bit more symmetry to the diagonal line. 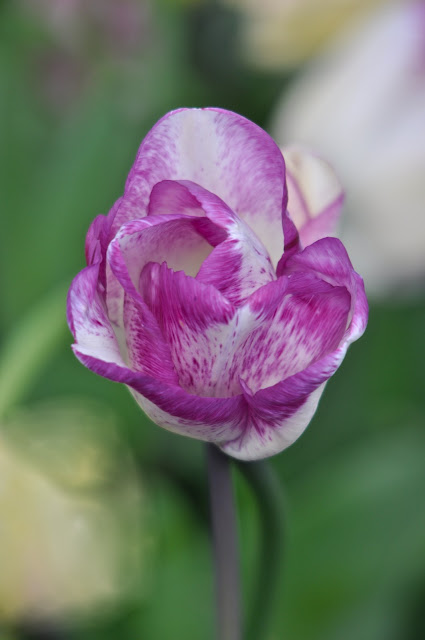 Finally, I cannot conclude a post about play without mentioning "my" Bill and Black Jack.  They both understand play, 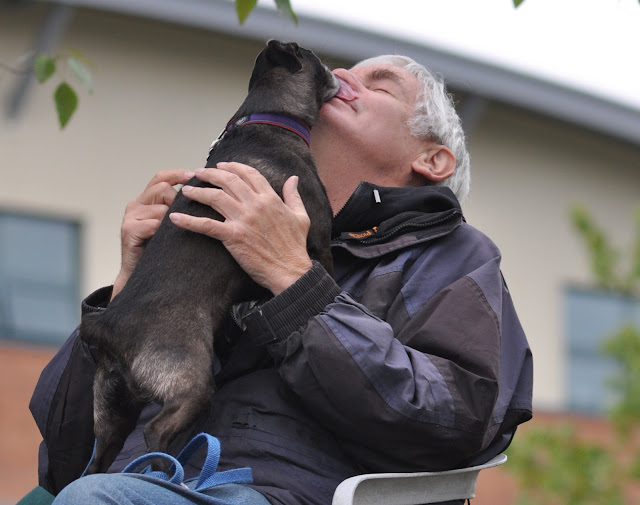 and I have much to learn from them. 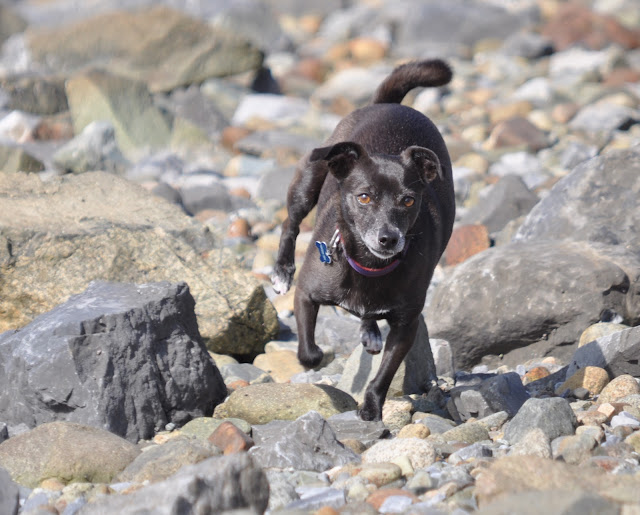 Thank you, dear Bill, for constantly bringing play into my life. 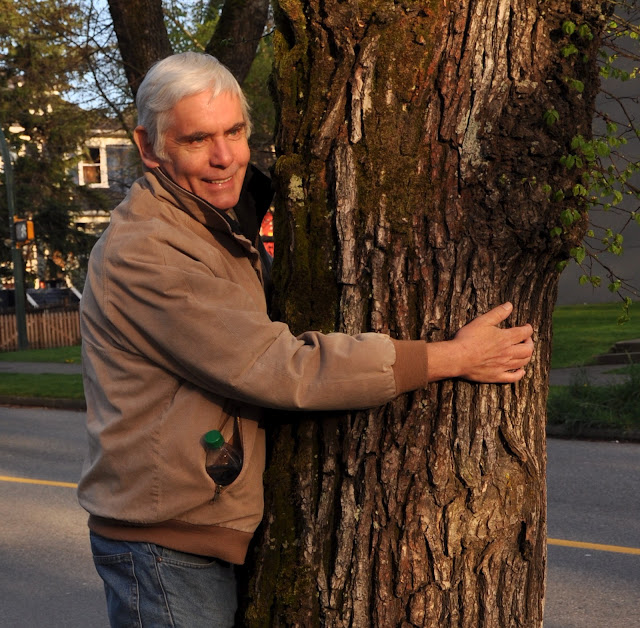 And, thank you, dear readers, for allowing me to share my playful moments this week with you.
Posted by Black Jack's Carol at 8:53 AM