*Just a note to let you know that all photos were taken in Vancouver, BC, Canada, where I live.

Last Friday evening, the 25th of May, the sky was not what could be called spectacular, but just before the sun slipped below the horizon, it struck a building on the other side of False Creek.  I must try to figure out that building's address and take a good look at it, but for now, all I can tell you is that the wall face must be made of a reflective material.  In the photo below, it looks as though it is on fire. 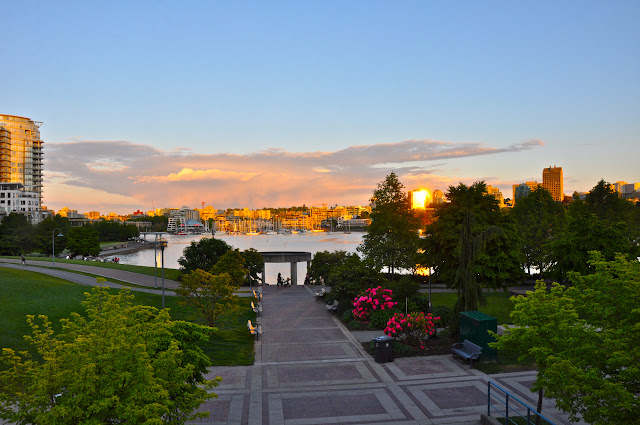 In this next picture, the building is almost hidden behind the trees on the right side of the photo.  However, the light was still so intense that it struck the three park benches all the way across the water.  I shot these first two photos from above the park, standing on Pacific Street, and pointing my camera between the bushes.  I was surprised that the golden light showed at all, but my favourite light here is coming from the benches. 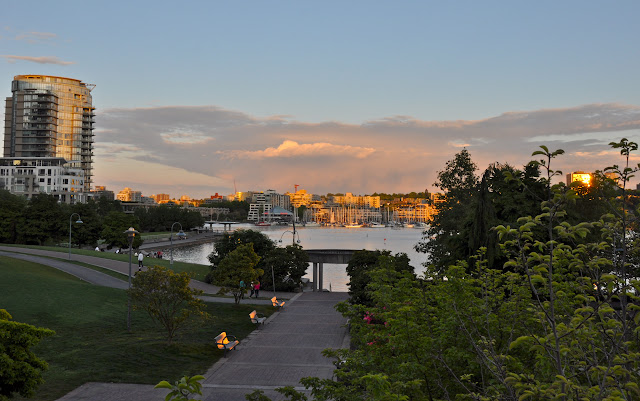 I walked down to the water and did a closer shot, trying to show the building and its reflection across the water. 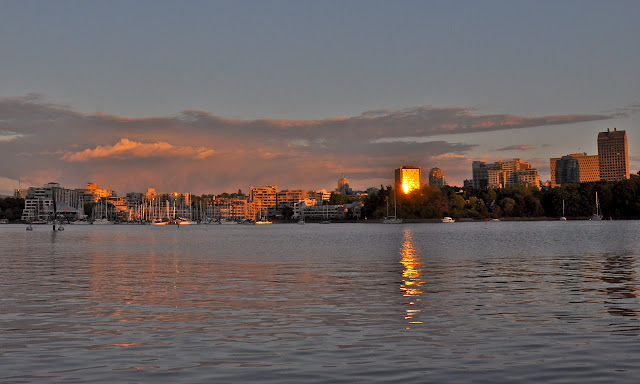 The next day, I was walking along English Bay.  There were many, many people celebrating the long weekend, and several stared in the direction of the wispy clouds that rested against  a copper background. 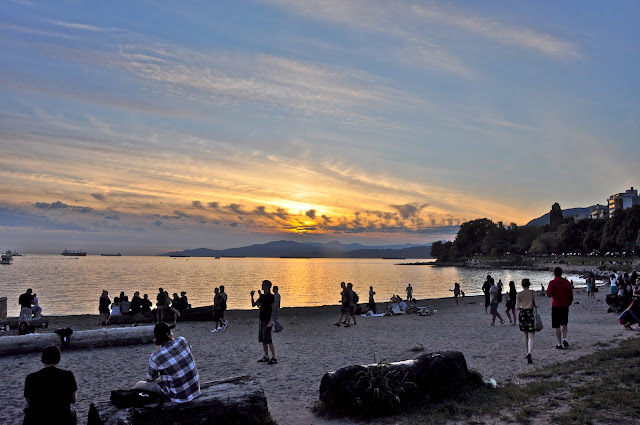 I zoomed in on that section and enjoyed the close-up view.  Mountains, copper tones, cloud wisps and boats all seemed to take on a touch of magic. 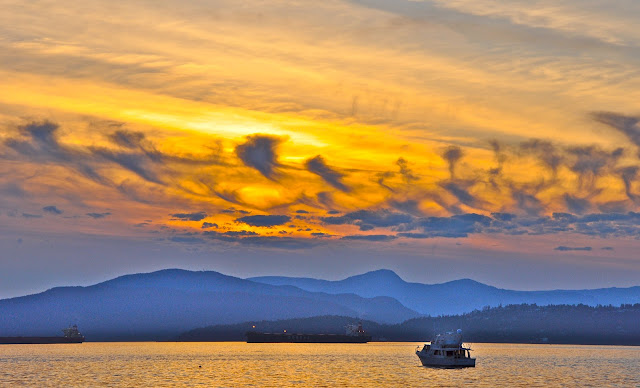 I am learning that it does not require an amazing sunrise or sunset to make an interesting sky.   As I look out my window on this last day of May, there is a fine rain falling, but there is light and there are clouds, and the sky changes depending on the direction of my gaze.  In fact, it seems to me that it changes from minute to minute. 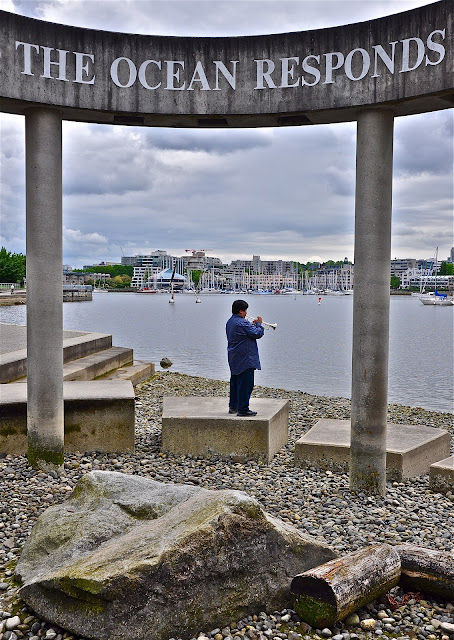 As described in the previous post, I spent an enjoyable couple of hours on Tuesday with musician, Daeyong Ra. 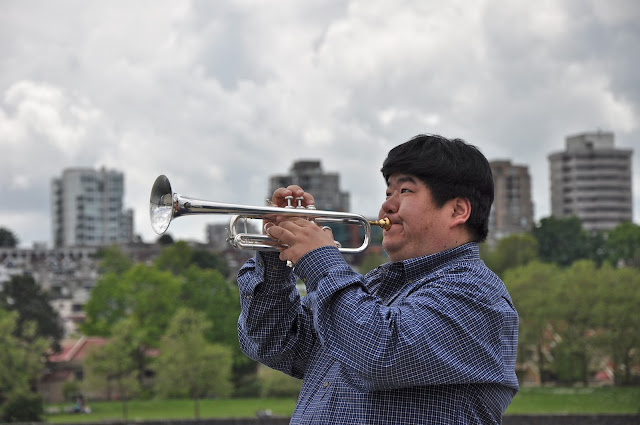 We moved to several different spots along the water, and the clouds and light seemed to shift with us. 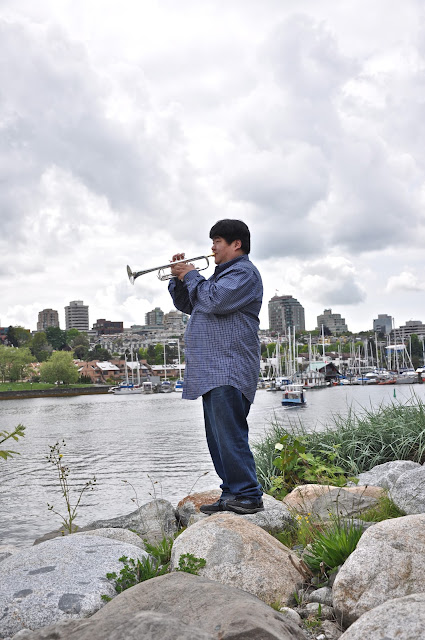 Daeyong was worried that people would object to his "noise pollution", but I guessed correctly that his beautiful tone would have the opposite affect.   These kayakers gave us a huge smile as they went by, and many passers-by stopped to marvel at his talent. 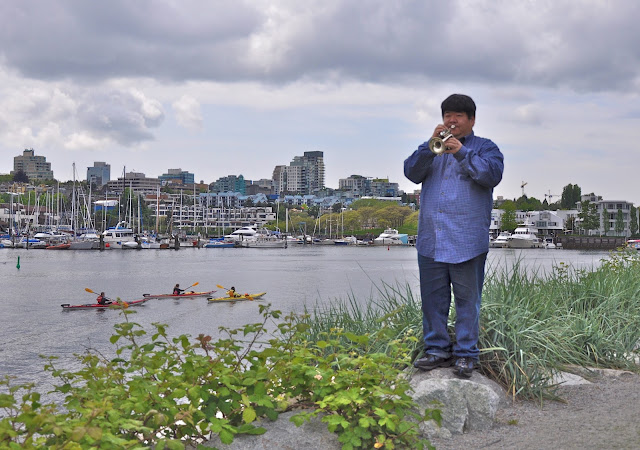 The last few pictures do not officially fall into "skywatch" material, but I include them just because.  Although the skies were grey for all of the pictures, there was a kind of white light that brought out the detail in these Rhododendrons. 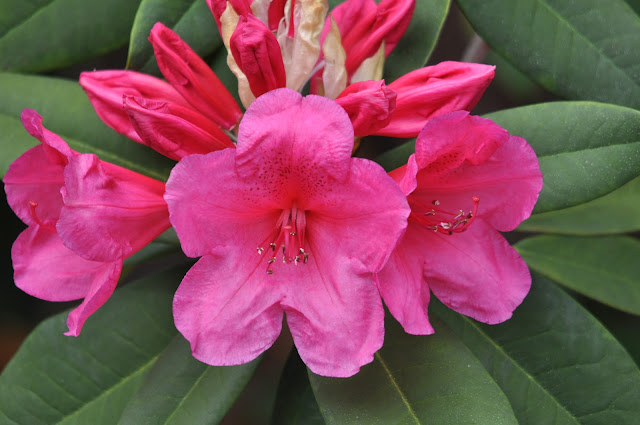 A new "batch" of Cormorants have recently taken to the water of False Creek.  I know they are young because of their white breasts.  They are still working on their flying skills and I found them most entertaining.  This one was revelling in bath time. 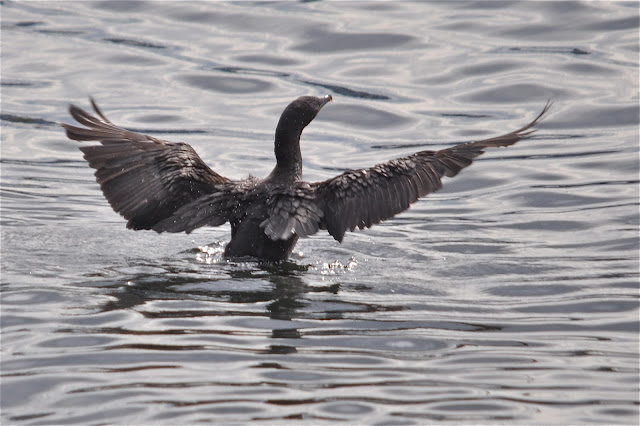 This one plopped into the water, and I imagined it must have felt something like an inexperienced swimmer doing a belly flop.  What a splash and what a cracking noise as it hit the water. 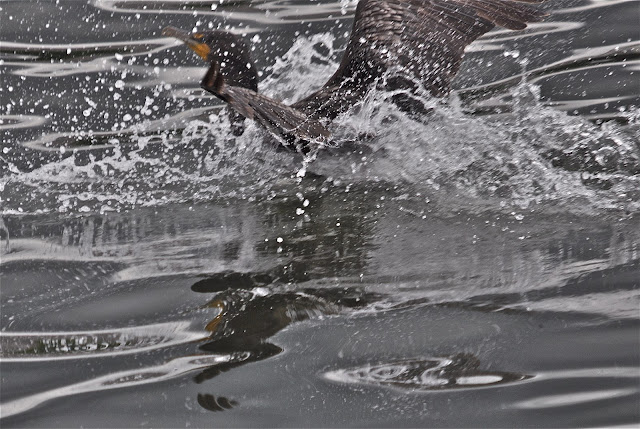 I was a bit worried, but it recovered its composure fairly quickly, 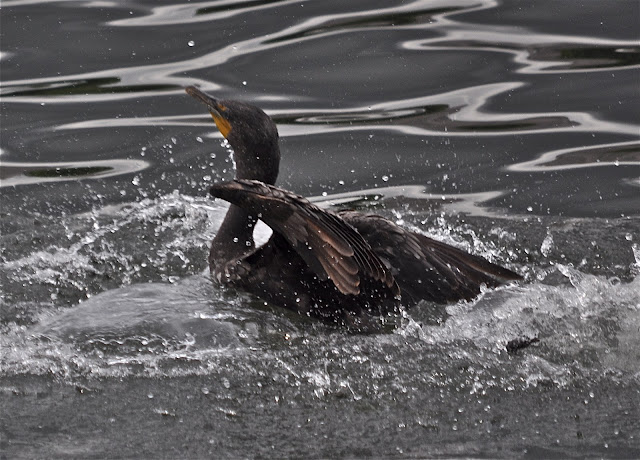 and landed safely on the sculpture that sits in False Creek.  It flapped for a long time, I think trying to dry off and maybe hoping to recover a bit of dignity too. 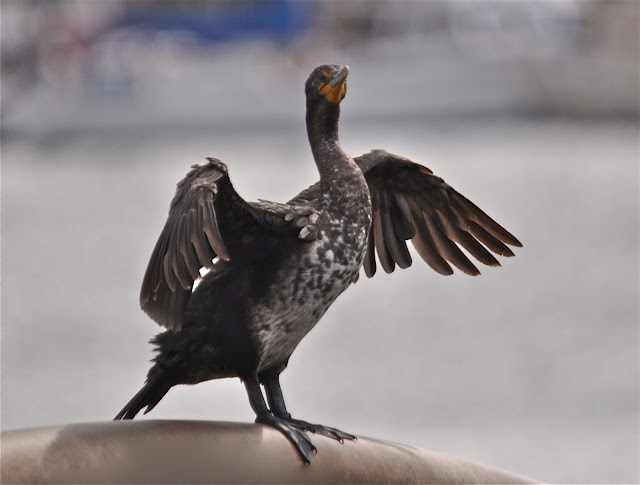 This seagull swooped over, the epitome of grace, and I could almost hear its "pffttt" of scorn and thoughts along the line of, "Look here, youngun'.. pay attention..  this is how its done." 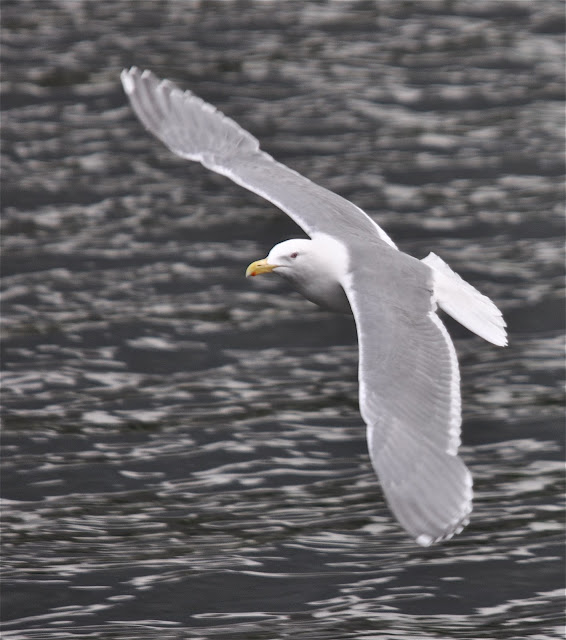 This plastic (?) roof rests over the lookout that faces the statuewhere all the cormorants like to rest and dry their wings.  (Only the tiniest bit of the statue is shown but it is called "Brush with Illumination" and you can learn about it here.)  The roof gives me a place where I can take pictures and still keep my camera dry.  I have appreciated it for some time, and think it deserves a place in this Skywatch post.  For other skies around the world, take a few minutes to check out some of the wonderful blog posts and photos at Skywatch Friday. 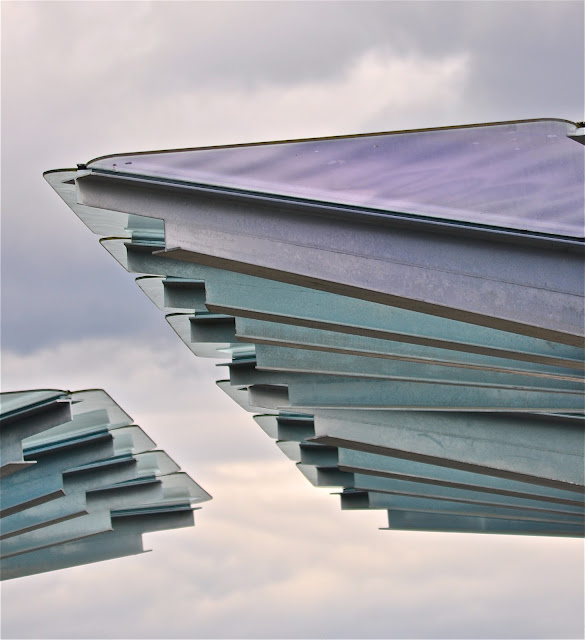 Thanks for reading, everyone.  The weekend is almost here.  I hope you have a good one!