A Young Eagle and some Great Blue Herons

A Young Eagle at Wreck Beach
After a great concert at UBC last week, we decided to follow a trail that took us, almost by chance, to Wreck Beach.  It is the only clothing-optional beach in Vancouver but neither Bill nor I are sun bathers, and in fact, it was just about the only Vancouver beach I had never explored. More about the concert and the walk in another post, but for Wild Bird Wednesday, I thought you might like to meet this young eagle. 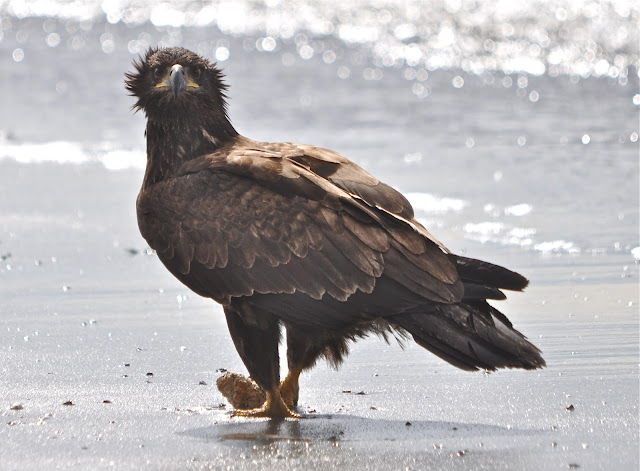 S/he appeared to be trying to figure out how to take off in a strong wind with a catch.. 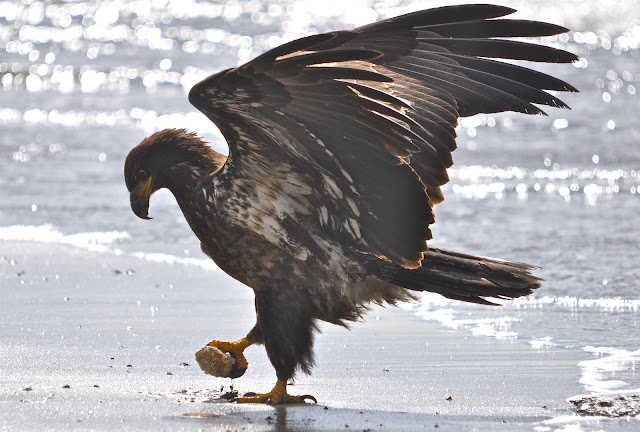 that I still haven't identified. 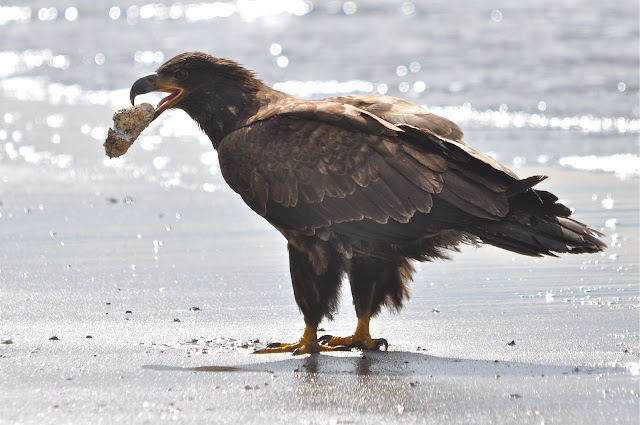 S/he wasn't successful, even after many, many tries and a valiant effort. 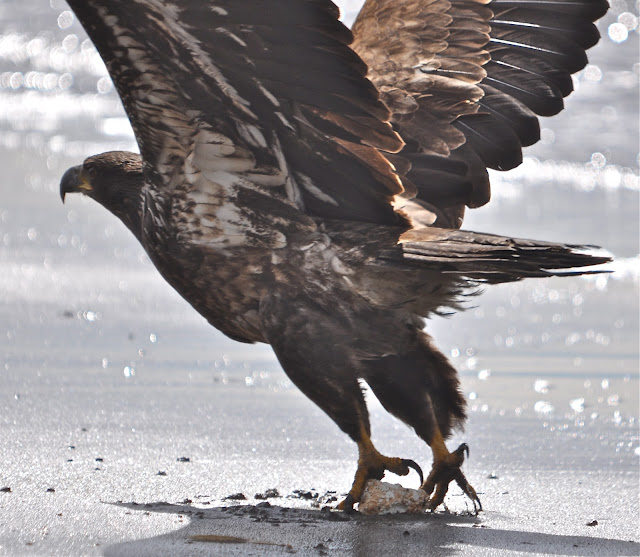 A second try with this perhaps lighter stick was also unsuccessful. 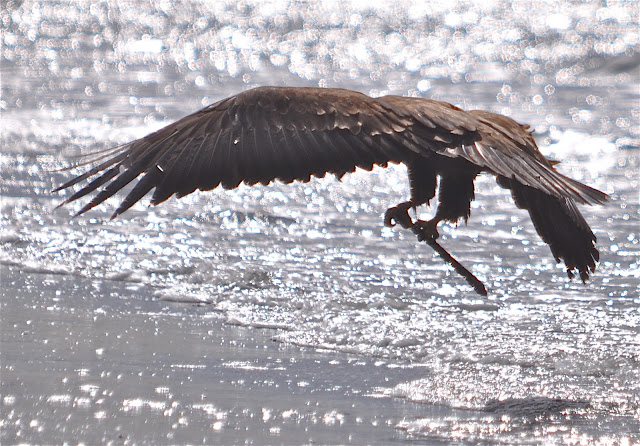 The bonus for me was a great opportunity to practice action shots, and something about the wind and waves and sun sparkles made for a very enjoyable time with my camera. 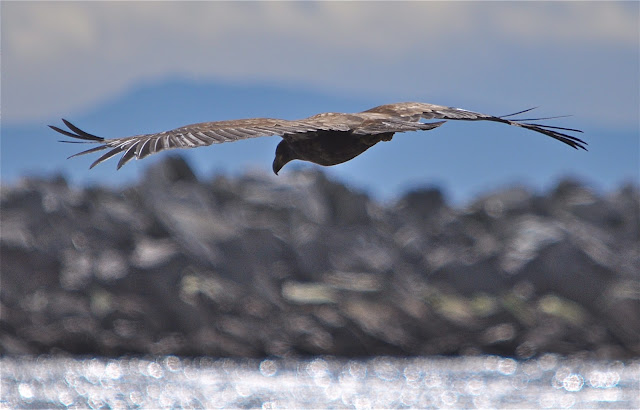 Stanley Park Heronry
The Great Blue Herons have returned to Stanley Park for the 13th year (the 6th since I first discovered them) and yesterday was a great one for taking photos.  I've been known to name my favourite pairs of herons but that can sometimes lead to disappointment when "stuff" happens.  Eagles and racoons prey on the eggs and on the young, fireworks cause so much stress that juveniles sometimes fall from the nest, and I've learned that nest-building requires skills that include an understanding of wind conditions, etc.  So, for this season, I'm going to leave anthropomorphism aside and will just assign numbers to the two pairs shown here.
PAIR #1
One heron appeared to be starting a new nest. 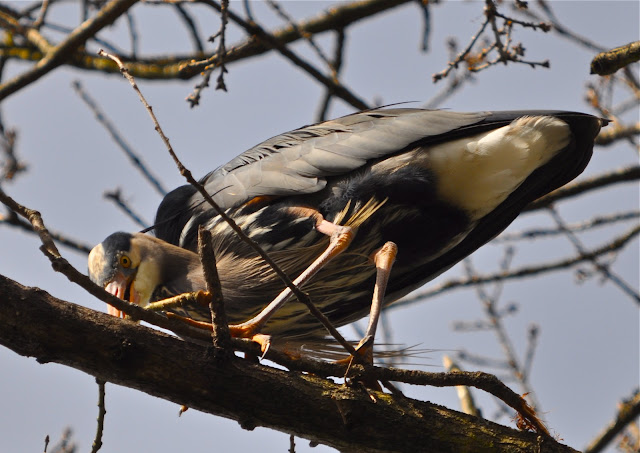 S/he looked up, noticed another heron in the same tree with a nest already well on the way.. 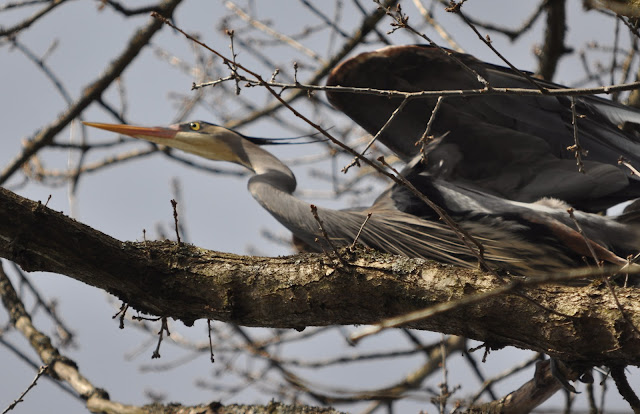 and I guess they decided to join forces. 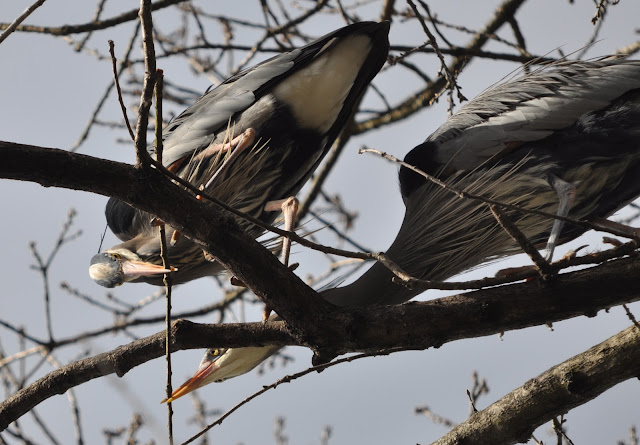 Nest building is high on the features a female looks for in the male and these two hit it off immediately.  (My interpretation.  Another possibility is that they were already acquainted.) 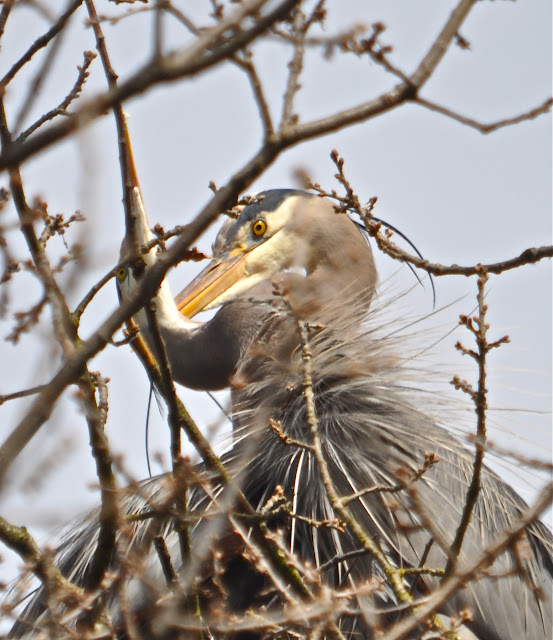 I tried to resist "aren't they cute" emotions as I took this photo but mostly failed. 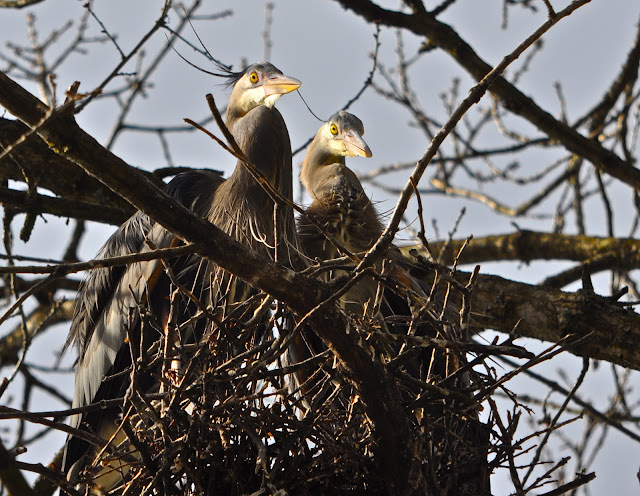 They carried out some of the pre-mating rituals, but at least while I was there.. 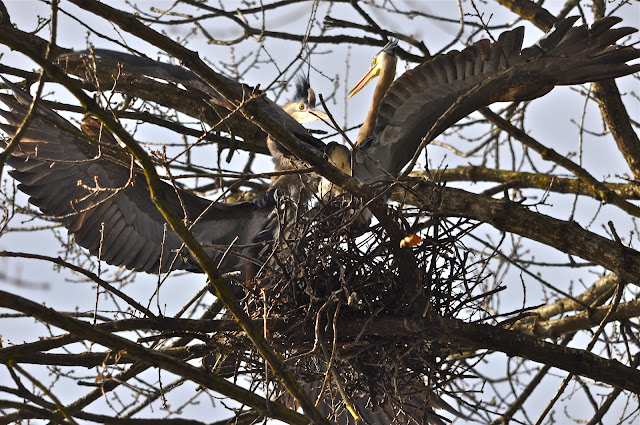 decided that the important matter at hand was to exhibit their skills and get that nest built. 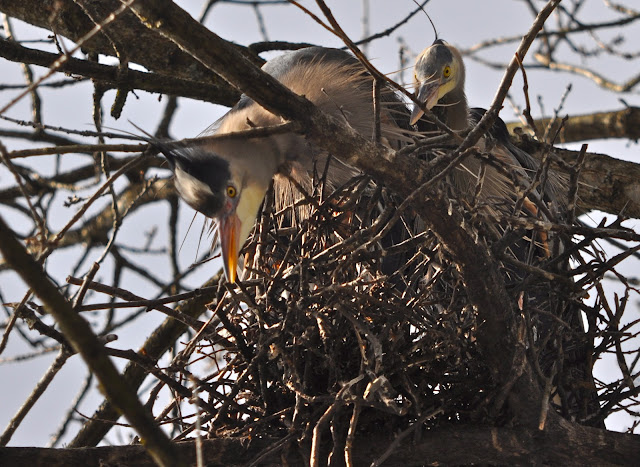 PAIR #2
This beauty came floating by me with a stick, 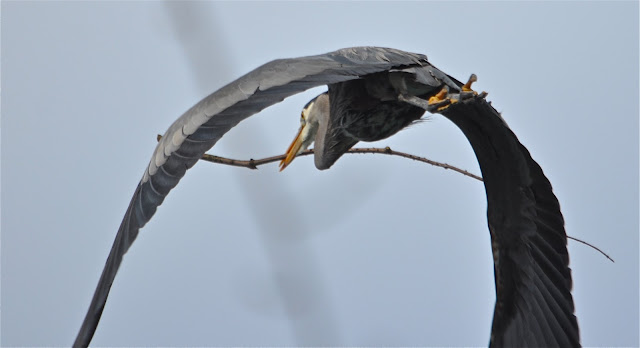 circled around a couple of times, 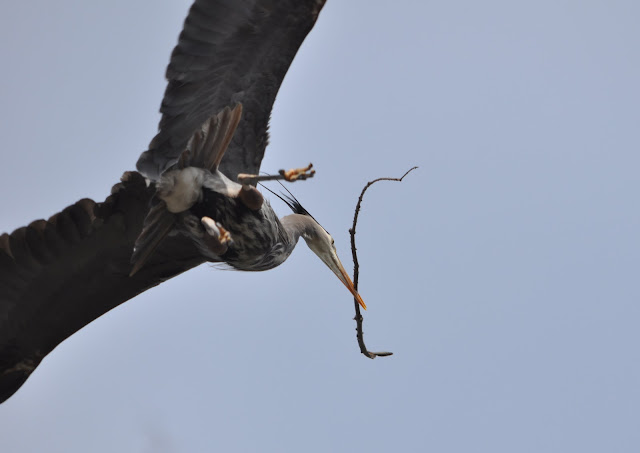 flew just about directly over my head, 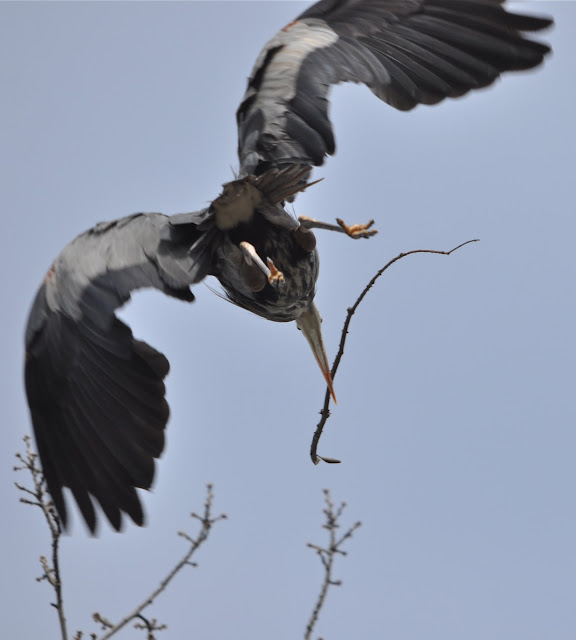 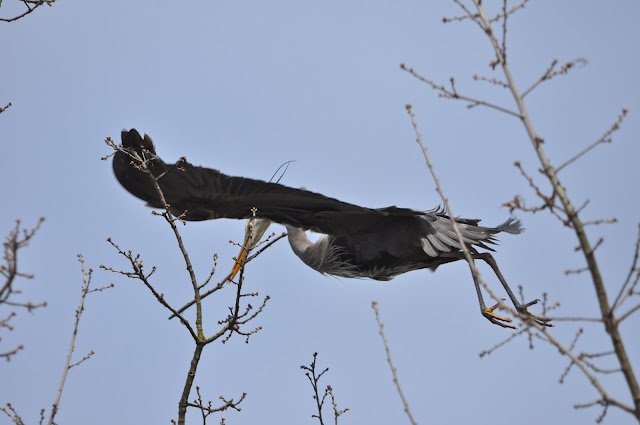 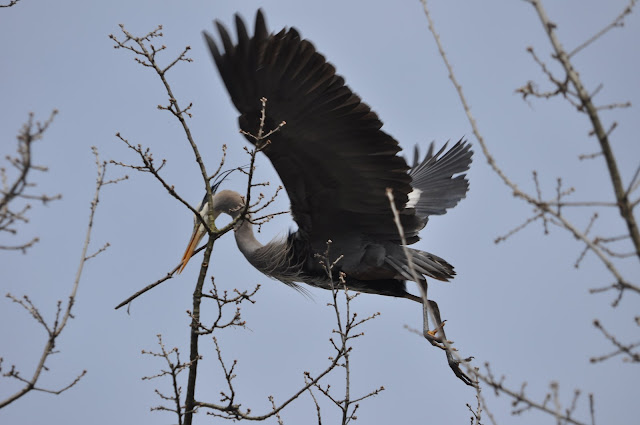 to make a delivery to his mate. 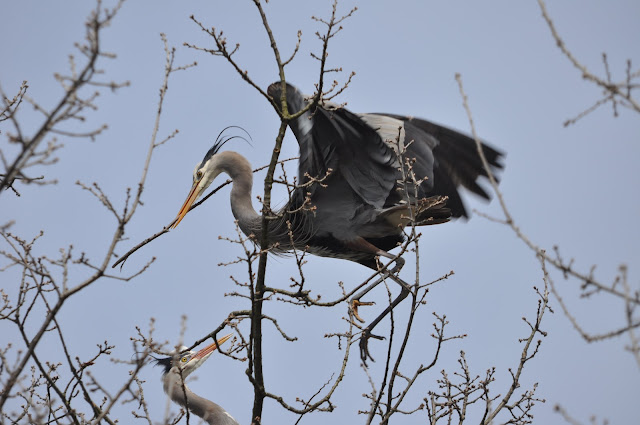 The gesture was much appreciated and followed up by bill clappering.  I just learned that term from this very interesting article titled "The Terminology of Courtship, Nesting, Feeding and Maintenance in Herons."  A quick look at that article gives me a name for many of the behaviours I saw yesterday and I intend to explore it more thoroughly.  For now, I am happy to correct a mistake that I have been making for years.  I will no longer call it "bill clacking." :) 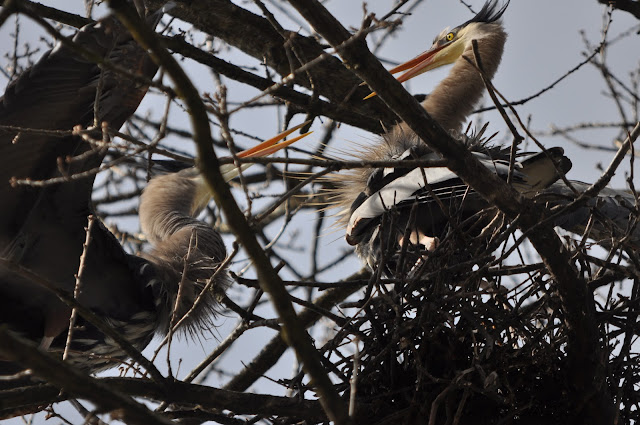 For more stories and photos of birds, I think you will enjoy the Wild Bird Wednesday site.  Thank you, Stewart, for keeping the meme running so successfully.
Posted by Black Jack's Carol at 5:54 PM