Catch-up #1 of Five for Friday Skywatch

Here is the first of five "catch-up" posts before my determined effort to do one (short!) daily post.  Since there are quite a few sky shots, and since today is Friday, I'm posting this one to Friday Skywatch .

It was a week ago today that we drove over the Burrard Bridge on our way to a concert.  That would have been the Ides of March, the day Julius Caesar was assassinated, but in doing a little bit of research, I've discovered that long before that event during a period known as late antiquity, it was a day to celebrate the feast of Anna Perenna.  The calendar at that time considered March the beginning of the new year, and Anna was the goddess of the year.  I could rest on that topic for way too long, but for now, just one point of interest that caught my attention in that last link.  Apparently, people would ask Anna to grant them as many more years of life as cups of wine consumed.  Hm..  I guess it was quite a party :)

I took the shot through the truck window as we drove along.  Bill quickly rolls the windows down whenever I begin to gasp at a particular sight.  It seems a miracle of my camera that anything came out, let alone such a wondrous sky. 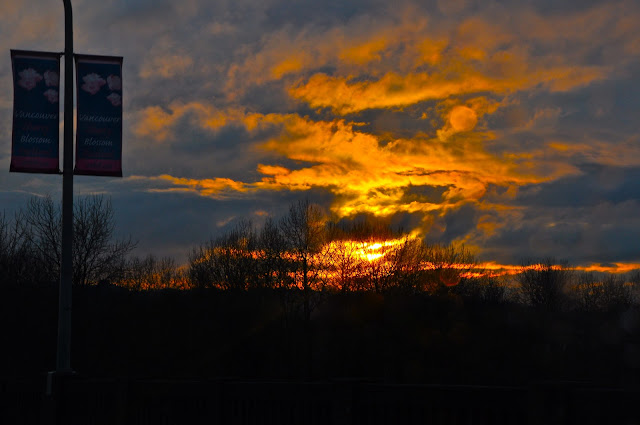 At a camera club meeting some time ago (I seem to have stopped attending lately), I learned about Bokeh.  I think this picture, taken seconds before the shot above, might be an example. 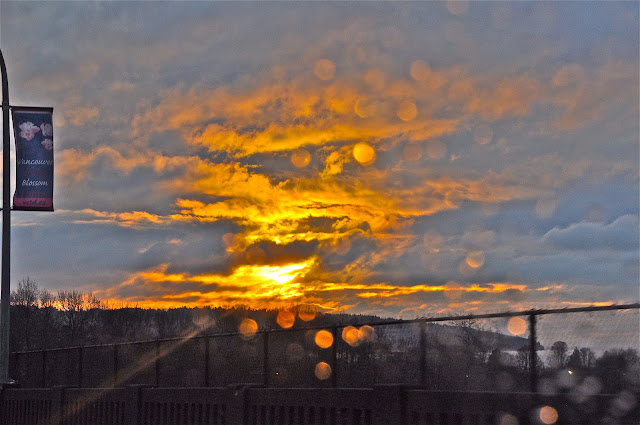 The beautiful sunset stayed with us all the way along Point Grey Road. 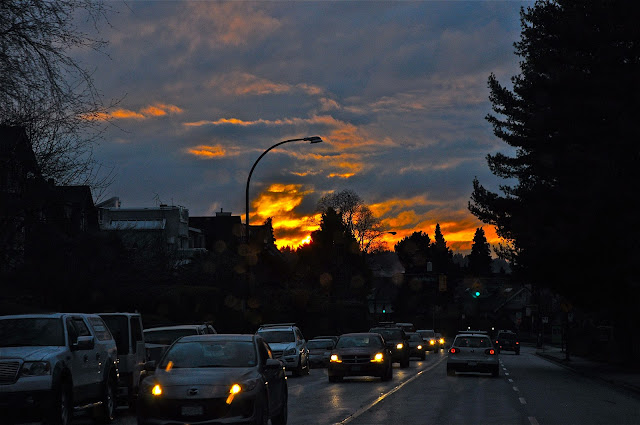 Below are Simon and Mimosa on the left, with Jimmy and McKenzie on the right.  We saw them just as we were getting into the truck on that same Ides of March day. You could say we are barely acquaintances but in the two years (plus) since moving into the Yaletown area, we have seen this foursome many, many times.  Here is what I can tell you for sure.  They have kind, friendly smiles, they love Mimosa and McKenzie, give them the best life they believe possible and neither has ever forgotten Money, their previous Pomeranian who died in 2008. That's enough for me.  I was happy to see them as it had been a while, and I always wonder if things are okay when someone (or even a familiar bird/critter) disappears for a while.  I spoke to them and then got in the truck, but heard Bill say, "May we take your picture?"  He really meant, "Can Carol take your picture?" since he didn't have a camera.  Now, why hadn't I thought of that?  We exchanged blog addresses, learned about Money and somehow, the beautiful sky (above) and wonderful concert (next post) that came afterwards seemed connected to our happy encounter. 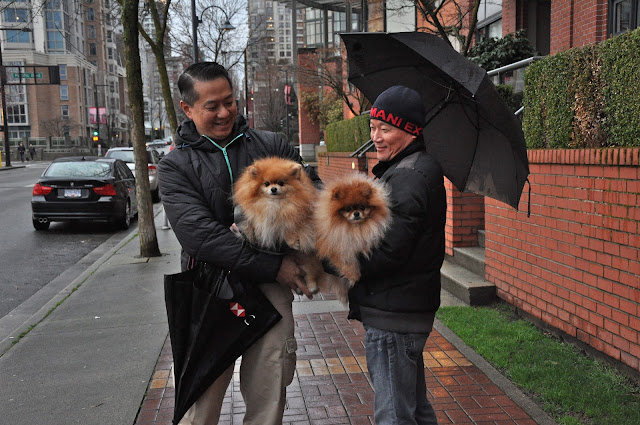 And, speaking of fondly regarded familiar sights, here is the latest update on Tupper. 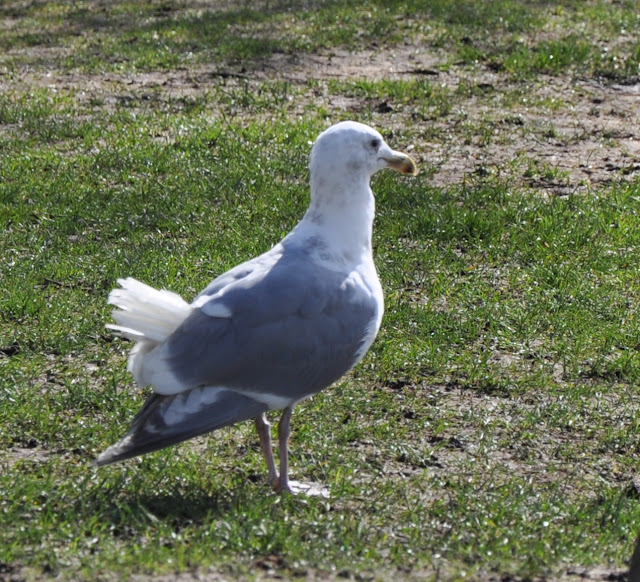 S/he continues to show up each day and I continue to wonder about that beautifully unique tail.  I've never seen another like it.  Have you? 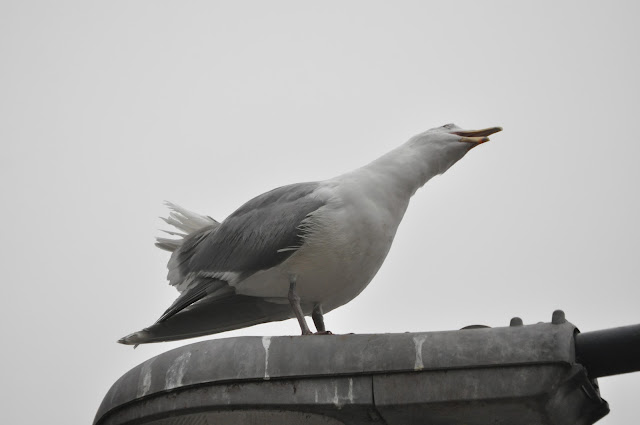 Tupper's visits are timed with the children's arrival at the playground that is connected to the elementary and nursery schools across the street from me.  Like Black Jack, I believe s/he has figured out that kids often leave edibles behind them.  Today, s/he wasn't there at her usual time and I worried a bit.  Then, I realized it is a school holiday.  I have long felt that we underestimate the intelligence of seagulls, and now I have another bit of evidence to support that theory.  S/he showed up later when a few parents brought their toddlers to play on the swings.  I was delighted to to finally see Tupper on her favourite street lamp perch. 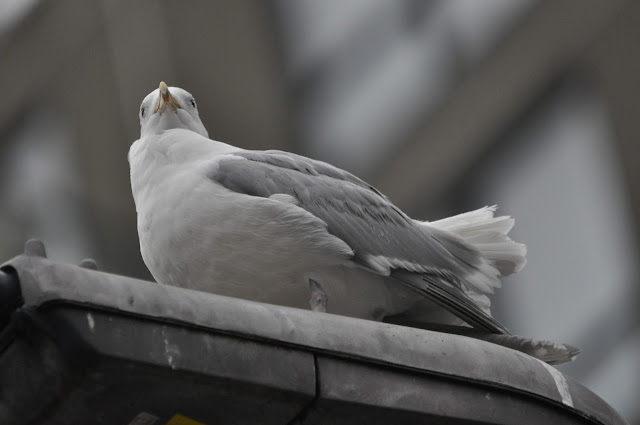 Coming back to skies, this one goes back to the 7th of March.  I remember we were about to sit down for supper and I looked out and saw the sun just about to sink between the buildings.  I don't think I even stepped out on the balcony.  Just did the quick snap through the window, and this beautiful star appeared when I checked the photo the next day.  A gift! 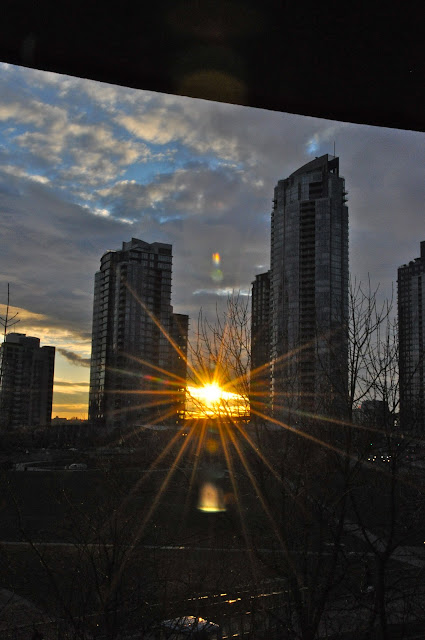 And, this may not feel like a skywatch subject, but if you look at the sky behind this crow (seen on March 3rd), perhaps you will see why the unusual patterns in the blue struck me. 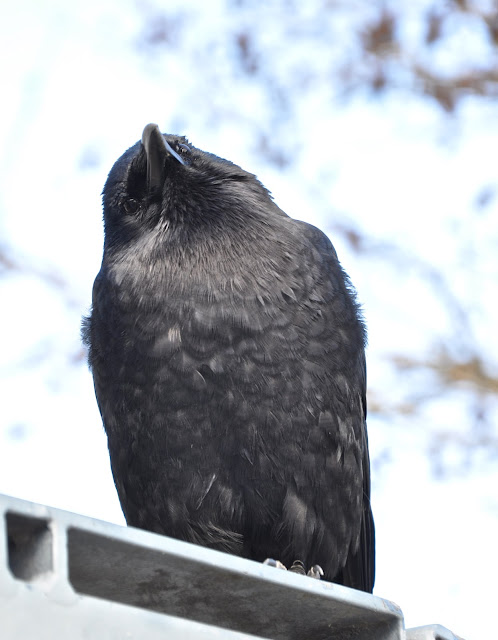 Okay, truth be known, that crow is a friend of mine :)  I haven't named him/her but I've been doing something I know I shouldn't.  S/he follows me quietly and one day, I threw a tiny piece of one of Black Jack's salmon treats.  But, on this particular day, I was struck with the way the blue light in the sky.. 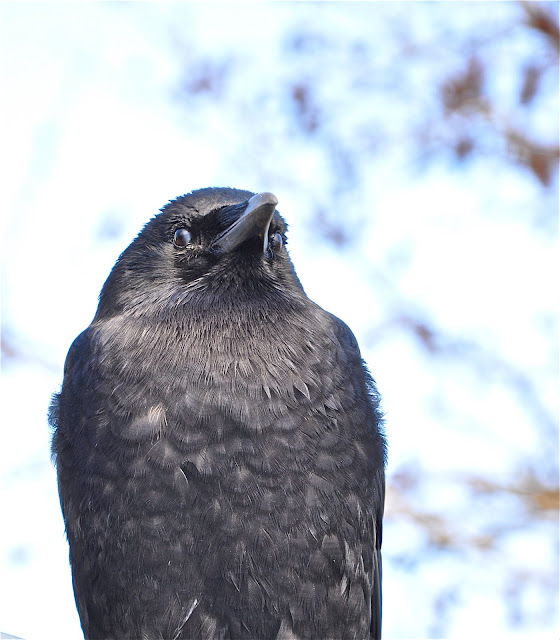 caught the gorgeous markings of the crow. 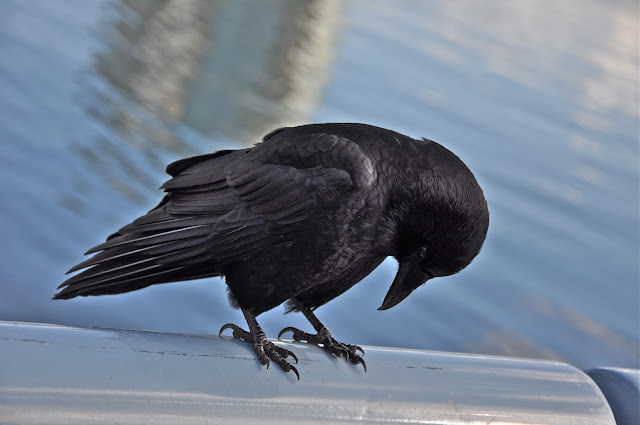 S/he followed us as we walked across the park and by a small garden on Pacific Street. 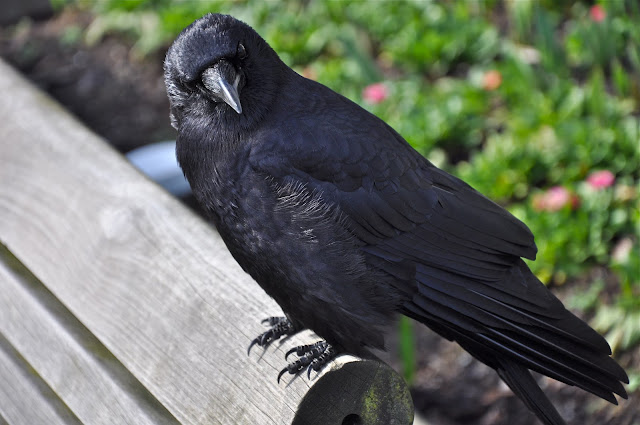 I recognized some great wisdom in the expression.  S/he had another crow with him/her and I've come to think that may have been an offspring from last year.  I know this will sound a bit goofy, but here is my theory (admittedly far-fetched).  The crow has since disappeared but another one has been noisily following me instead.  Perhaps, that second one is the offspring, and the quiet one may have left to build a nest and raise a brood.  The "young" one had a very unpleasant and demanding "caw" but I noticed yesterday, was beginning to mellow.  Again, I know this sounds goofy, but I give one or two treats and then raise my hand to tell them there are no more.  They rarely ask after that.  I also find it interesting that I'm not followed by any other crows.  Do they tell each other to find their own human for hand-outs?  I hope one day to see "my" quiet one again.  And, just a note: I was using my small lens here.  That is how close the crow came, even with Black Jack beside me. 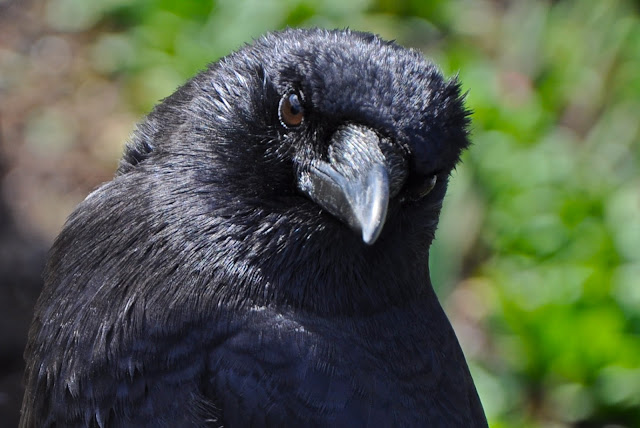 I will close this post with some "leftover" flowers that seem too beautiful to keep to myself.  This first one was in a vase behind a condo window the same day of the blue skies.  I could see the vase and flower but nothing else inside the condo.  The rest of the shot (above the fence) is a reflection from the other side of the street. 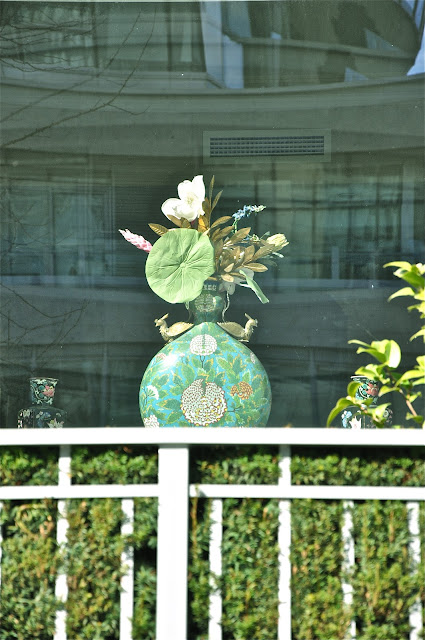 I seem to be very lazy about learning the names of flowers but believe this is a Rhododendron.  It was in David Lam Park. 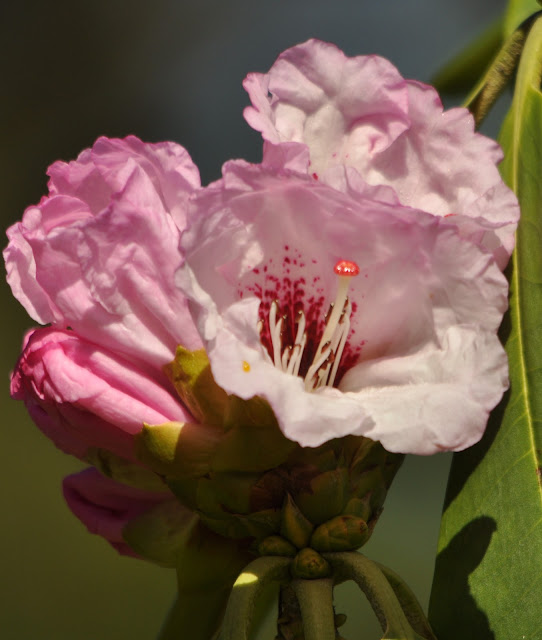 This gorgeous English Daisy (?) was beside "my" crow. 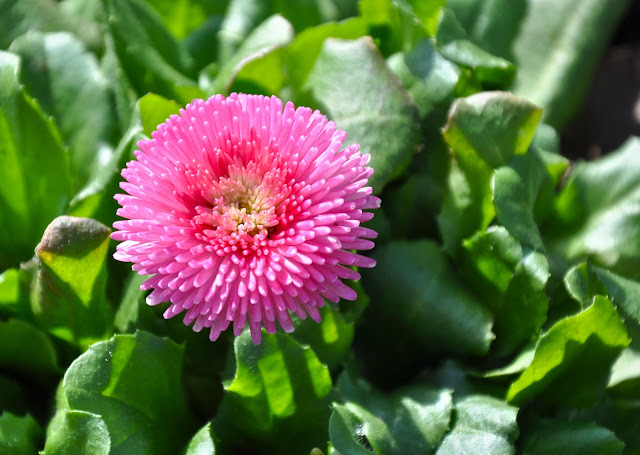 This skunk cabbage was my first sighting this year.  I saw it by Lost Lagoon in Stanley Park. 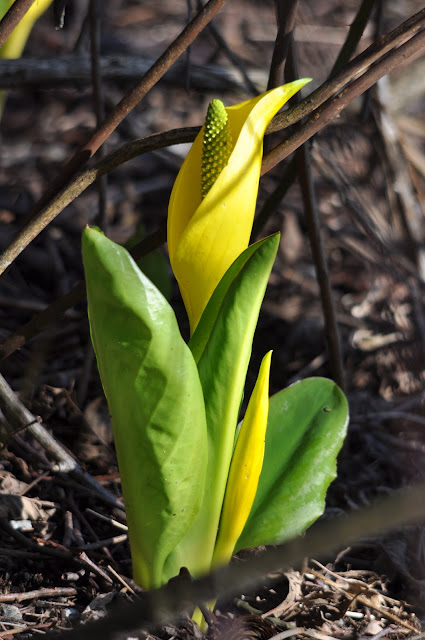 Another Rhodo, I think, also in David Lam Park. 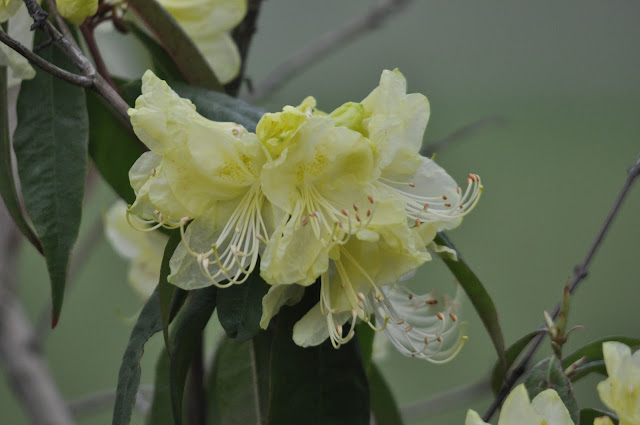 These were outside a flower shop.. 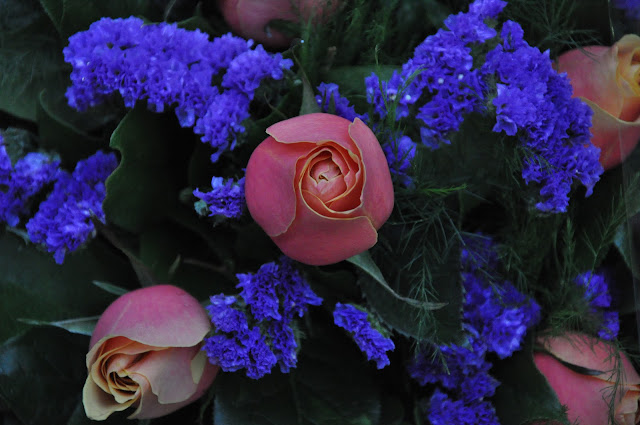 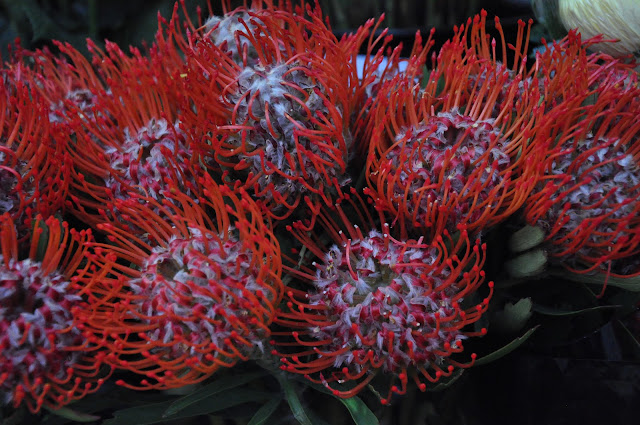 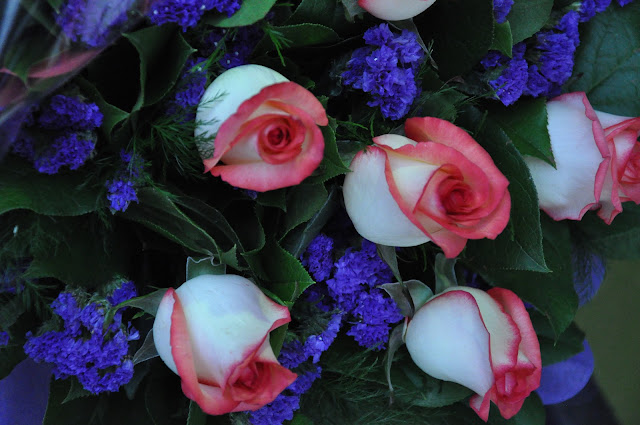 And, a final shot of some crocuses.  I've heard that a photographer's secret is to carry a spray bottle with them to create appealing water droplets for flower shots.  I've never had to do that in Vancouver :)  Thank you so much for stopping by.  For lots of wonderful sky shots, you may enjoy the Skywatch Friday blog meme. 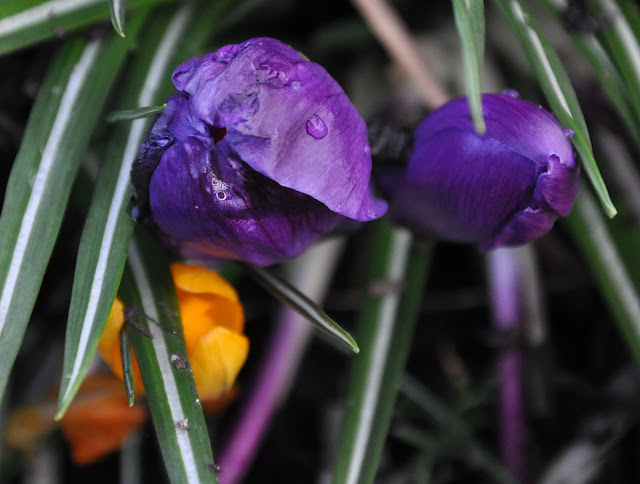