Blue in a Good Way for "Blue Monday"

For those of you following the story of Bill's surgery and chemo treatments to combat Colon Cancer (2nd month of a 6-month plan), you might remember that I've been living with him in his Point Grey home for the past three months.  Well, today is different.  I've come back to my apartment in Yaletown for a few days.  It is an opportunity for the two of us to take stock and to focus on positives in a time that I know is making us stronger.  I miss him and look forward to seeing his sweet face soon, but in the mean time, here I am back in blogger land.  I discovered a meme called Blue Monday, so for today, each photo will have some blue in it.  It's a great way to celebrate one of my very favourite colours.

When Bill came across a mystery bloom a couple of years ago, he liked the flowers so much, he did a little research and discovered they are called "California Lilacs".  We saw these in David Lam Park on May 30th and greatly admired the lushness of the blossoms. 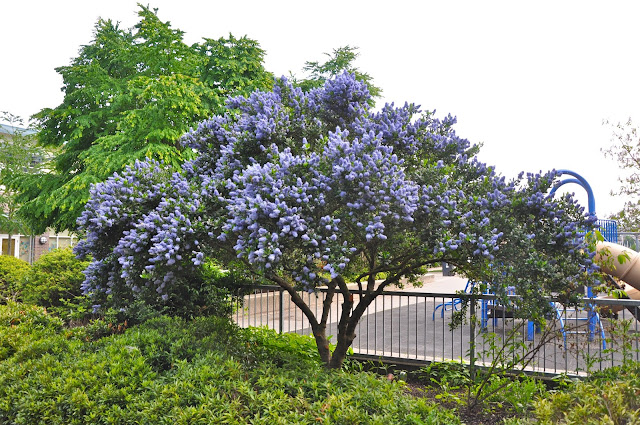 The bees always gather around California Lilac trees.  Sometimes I think it is their favourite bloom of all, and so it was relatively easy to capture the photo below just a moment or two after taking the one of the tree.  That expressive bee looks to me like a lady in a beautiful orange skirt, her posture registering her full enjoyment in the moment.  And, here, a little story about Black Jack.  She stepped on a bee in Jericho Park the other day and that is definitely the other side of the coin as far as my appreciation for bees goes.  Poor little Black Jack couldn't figure out what hit her.  Her whimpering turned to piteous cries and and she couldn't put her right, hind foot to the ground.  I sat on a log with her on my lap, knowing from her trembling body and pounding heart that I couldn't give up until the source of her misery was found.  Eventually, I thought I saw a thorn (or possible sting) in the pad of her foot and managed (I thought) to pull it out.  Still she continued to cry and I finally decided to carry her to the nearest veterinary hospital, one that I hadn't been to for years.  Dr. Nina Speyer-Ofenberg stuck me immediately as a meticulous and caring person.  She listened carefully to my description of what happened and though I couldn't quite find the spot where I had seen the thorn/sting, she persisted in her search for an entry point and finally managed to see a tiny speck of the remains of what did turn out to be a bee sting.  Black Jack's foot was swelling quite a bit by this time and she continued to act about as far from "normal" as I had ever seen her.  I was really impressed that Dr. Nina was not only able to see that minute remnant of sting but was also able to pull it out.  A shot of antihistamine and Black Jack's recovery was instant.  It felt so, so good to see her transform before my eyes to the happy, dancing begging-for-treats little dog I sometimes take for granted.  Thank you, from the bottom of my heart, to Dr. Nina. 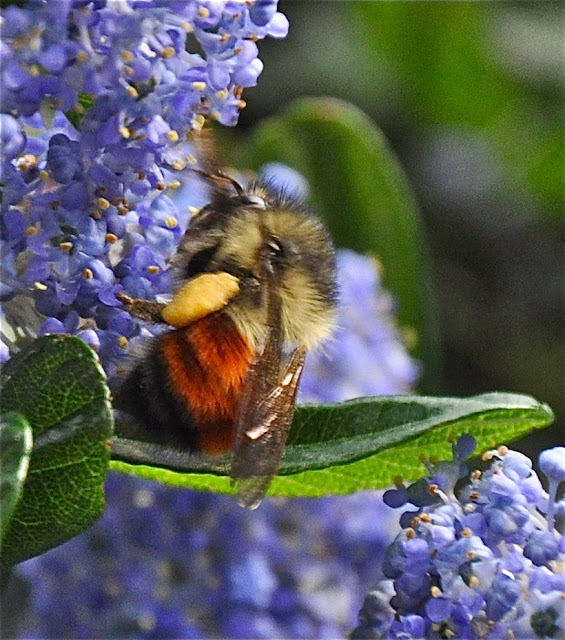 I've digressed just a bit, but back to the blue theme with this lovely flower taken on May 31st in Bill's wonderful neighbour's (Jane) garden. 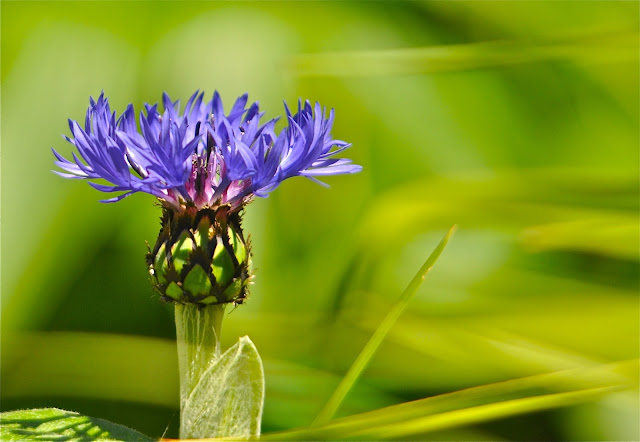 I think this Iris also came from Jane's garden. 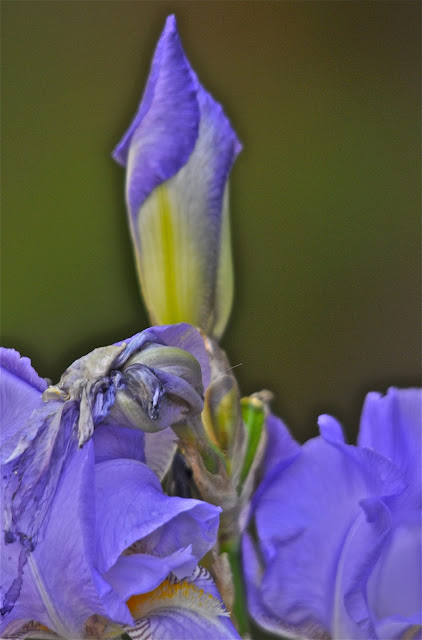 And, this last California Lilac was taken in the lane near Bill's house on June 4th. 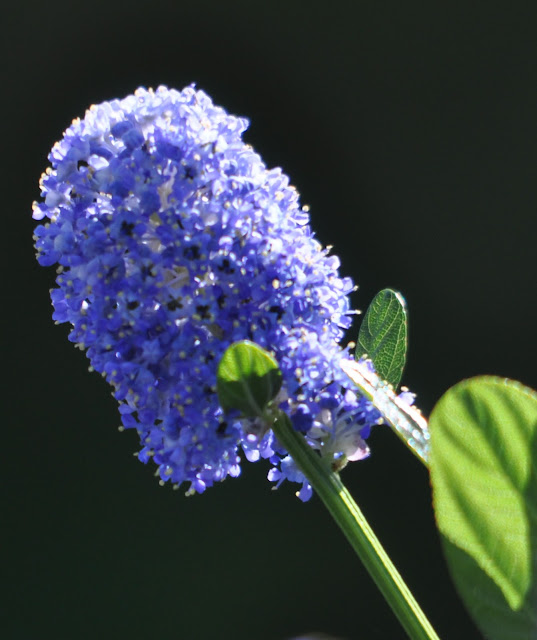 Bill's illness has brought many changes to both our lives.  One blogging friend commented that our lives have been turned upside down, and sometimes, that does seem to be the case.    I do miss the many cultural outings that we had been enjoying for almost seven years (August 1st will be the anniversary of our first meeting).  The photo below was taken on June 5th at the Canadian Music Centre, about a month after Bill's release from hospital after his surgery.  Sadly, his subsequent chemo has drained his energy to the point where those outings are no longer possible, but this one was not only enlightening but its memory continues to inspire me to seek out musical events and to share them with Bill, sometimes by describing them and sometimes by referring to postings and videos on line.  The people in the room represent young Canadian composers, writers, performers and those interested in learning a little about the long road a vocal composition travels before it makes its debut on the stage.  It may begin as a melody/motif in a composer's mind or, sometimes, it is a piece of  text (poetry or prose) that starts the ball rolling.  The works we heard were a pleasure in and of themselves, but learning about the collaboration between musician, lyricist and performer was, as I said, inspiring.  And did you notice?  Black Jack was not only accepted but greeted in the most friendly way by many of the people there.  The colour blue?  Perhaps it's a bit of a stretch but there are at least a couple of blue shirts in the photo and Bill's "blue" jeans will fit the bill in a pinch. 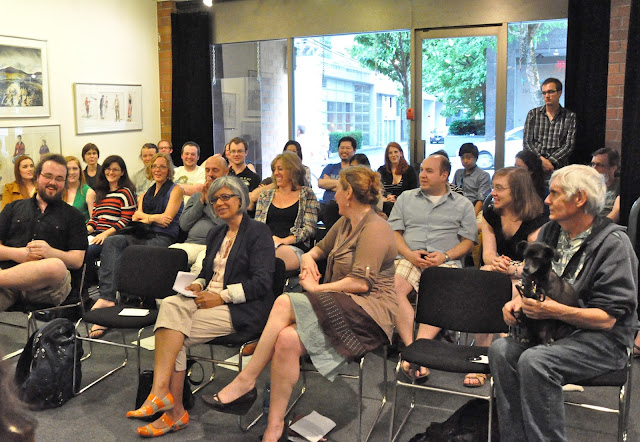 The rest of the pictures in this post were taken on June 8th, at the Mill Lake Water Park in Abbotsford, BC.  Bill gathered all of his strength to drive me there as I had an enormous desire to see Lilee-Jean, someone I have posted about here and also in this post.  The prognosis for Lilee-Jean does not look good as her brain tumour is growing very quickly and her chemo treatments are now palliative rather than curative.  But, her parents have not allowed themselves the luxury of grieving. Rather they have created a bucket list that they call Dancing in the Rain. I am in awe of their strength and of Lilee-Jean's ability to LIVE every moment of her life with such indomitable spirit.  One of the items on the list was for her to go to school, though she is only two and a half years old.  You can see a beautiful photo of her in this news story the day she realized that goal.  Her gleeful expression says it all as she interacts with kids twice her age.  The picnic was another item on the list.  Lilee-Jean's parents wanted to give those who had not yet had the opportunity to meet her this chance to feel her energy in person.  I took a few pictures of her and love this one where she revels.. 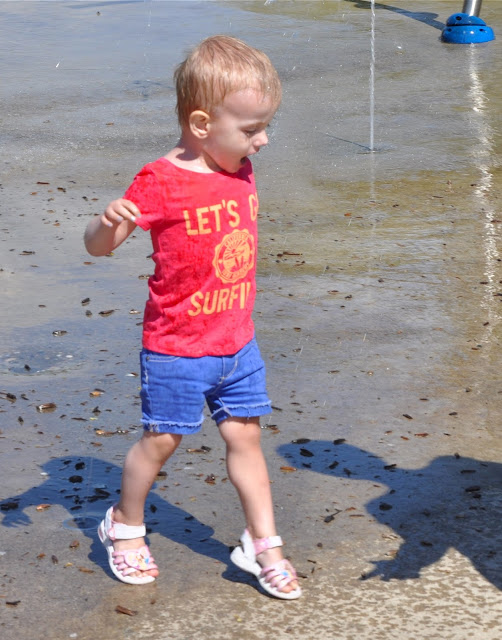 with her aunt in the feel of the water running under feet and hands. 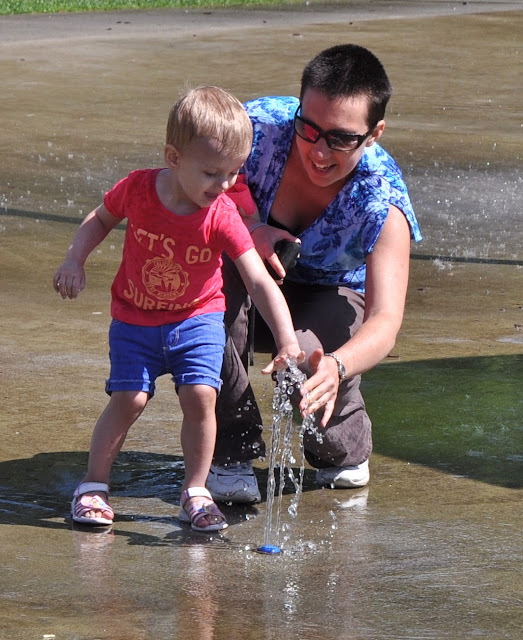 So many people have been touched by Lilee-Jean's story and this cake was just one of many ways people expressed their emotions.  Lilee-Jean's mom keeps a blog and every one of her posts has reached somewhere deep inside me.  This particular post haunts me.  It is not for the faint of heart but if ever you wanted to read the expression of a mother's love in achingly beautiful prose, then this would be it. 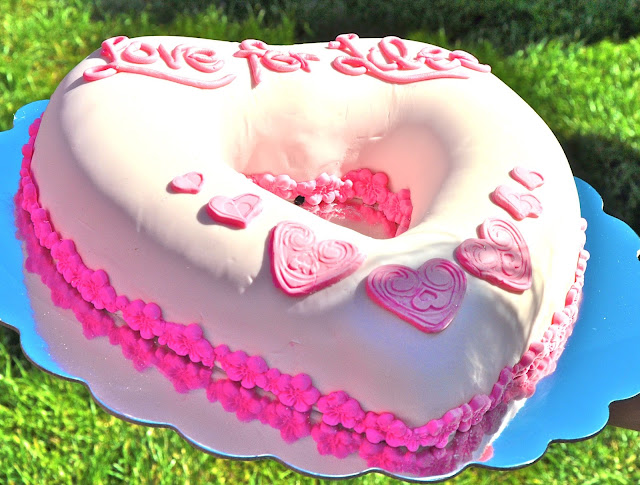 Still a little blue in each photo as I come to the conclusion of this post.  Thank you, dear Bill, for taking me to the picnic and for making sure Black Jack had fun too. 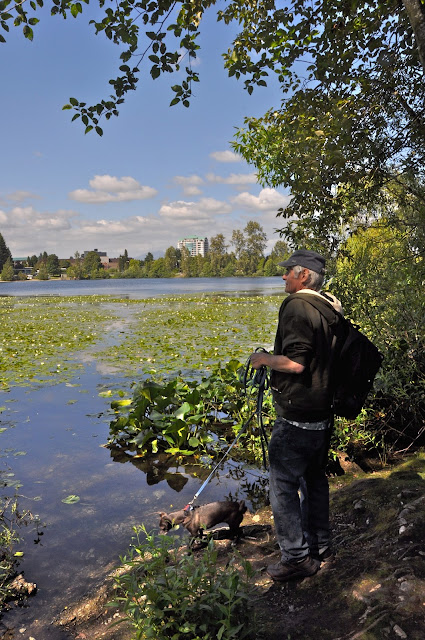 This picture at Bridal Veil Falls (with blue water) taken by Andrew, Lilee-Jean's dad, seems the perfect way to conclude a post that refuses to be sad.  He posted it on facebook with these words:
LJ made the hike up to bridal falls yesterday! She is still doing so well. She gets pretty exhausted from this heat (don't we all?) but you'd never know it until her head hits the pillow!
- Dad.

When I was at the picnic, I bought a "Love for Lilee" bracelet that I haven't taken off my wrist since.  It reminds me daily to grab life and run with it.  You can order one as well, if you have the means to help Lilee-Jean's parents fit a lifetime of living into whatever time she has available to her. 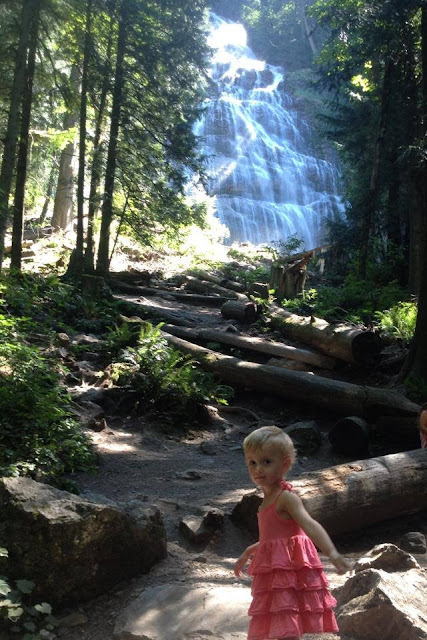 And, if you find yourself yearning to see even more representations of the colour blue, head on over to Blue Monday.  I think you'll enjoy it.  Have a wonderful week, everyone!
Posted by Black Jack's Carol at 3:31 PM