Bert and Ethel, a Hummingbird and a Word about Bill

Living in Jericho Park are two Bald Eagles named Bert and Ethel.  They were named by local wildlife enthusiasts, some of whom are responsible for the platform shown below.  Several accounts have been written about this "architecturally challenged" pair.  Here is The Courier version, should you have time to explore.  The quick version of the story is that the eagles have been around for about 9 years (my guess, but this needs more research) and for several of those years, just as the offspring prepared to fledge, the nest would either be blown from the tree or the branch it was placed on would collapse under the eaglet's weight and rambunctiousness.  No time for more details in this post, but here are some pictures and the latest information gleaned from my observations and from conversations with Dave, Corby, Glen and Louise who drop by on a regular basis to see how Bert and Ethel are doing.

June 2
Ethel feeds one of two chicks born in May. One of them (I think the one in the photo) fell from the nest a few days after this picture was taken.  The eaglet was taken to OWL, an amazing rescue in Delta, where it recently had surgery to repair its broken wing.  It will be returned to the Jericho area after its rehab is complete.  OWL has managed to save many of the Jericho eaglets over the years. 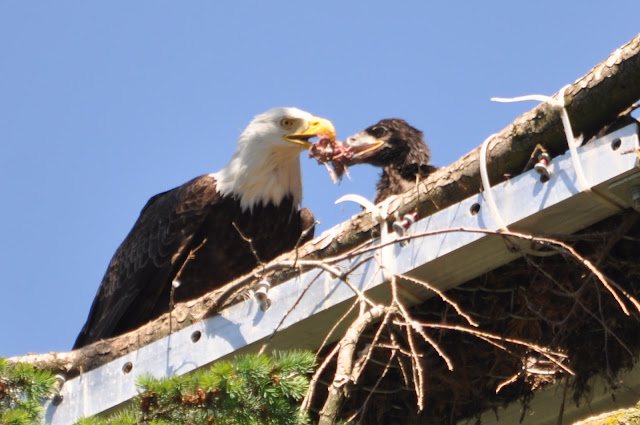 June 4
I think this is also Ethel.  She is waiting for Bert to return. 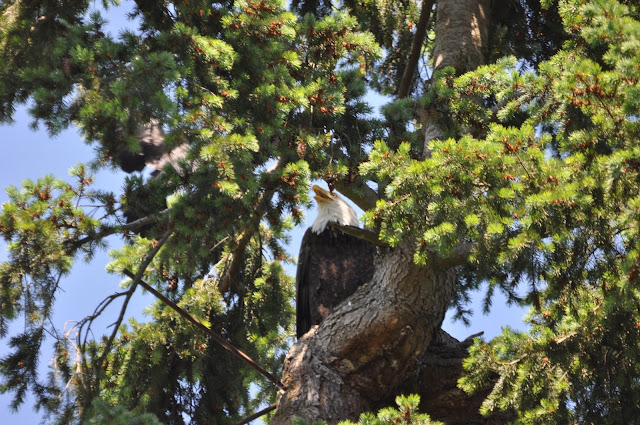 There is an ongoing battle between the eagles and crows.  I do not take sides, since I know many crow offspring die at the talons of Bert and Ethel. 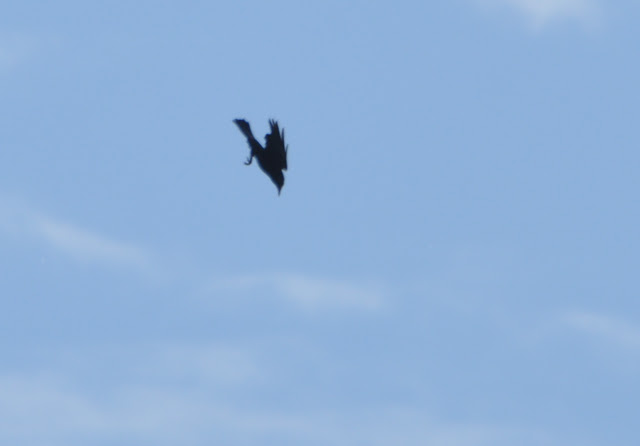 It is incredible to see how persistent, organized and brave (or foolhardy) the crows are. 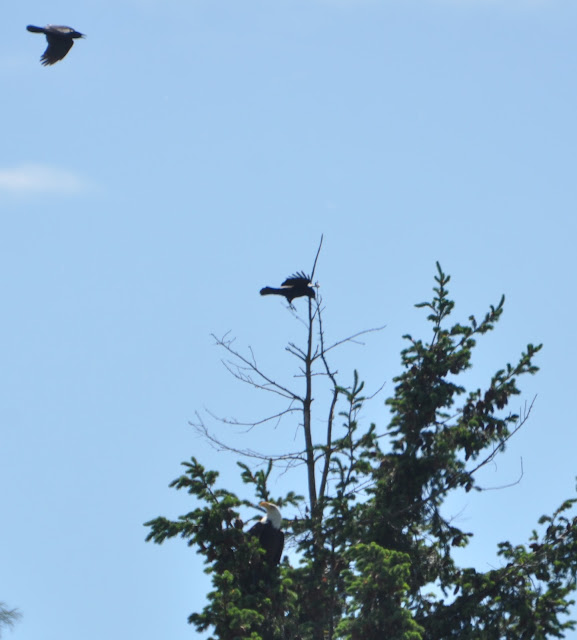 I think this is the younger chick (I will name him/her Sisbro for purposes of this post), now in a position to eat very well without an older sibling competing for Bert and Ethel's attention. 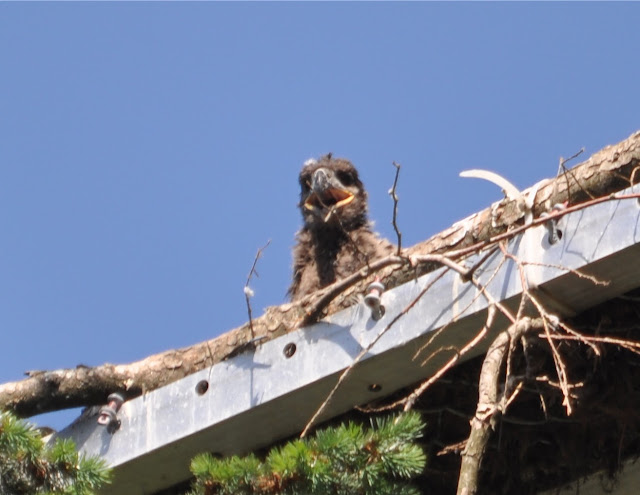 June 14
Bert returns to the nest with unidentifiable food for Sisbro.  Hot in pursuit is a jet-lining crow. 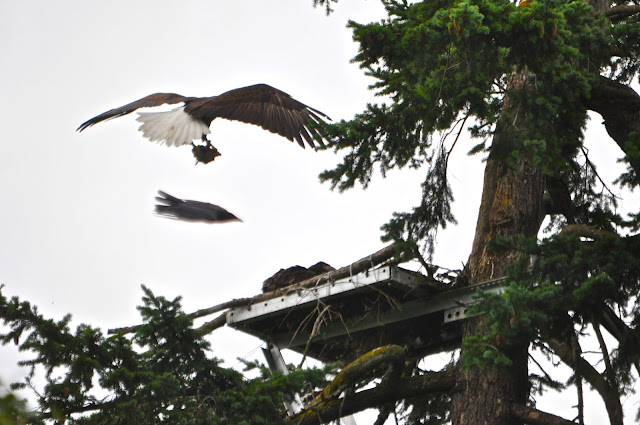 Bert (on the right with the band on his foot) and Ethel watch over Sisbro from a higher perch in the tree.  No one seems to know how or when Bert was banded. 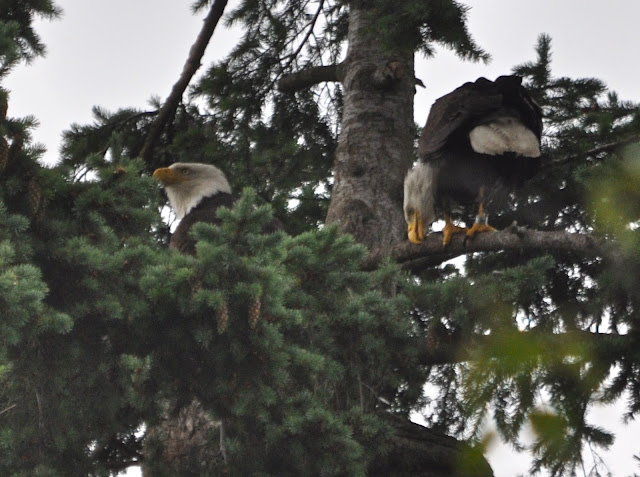 Sisbro tries to position himself for a poo over the edge of the platform.  Phew! 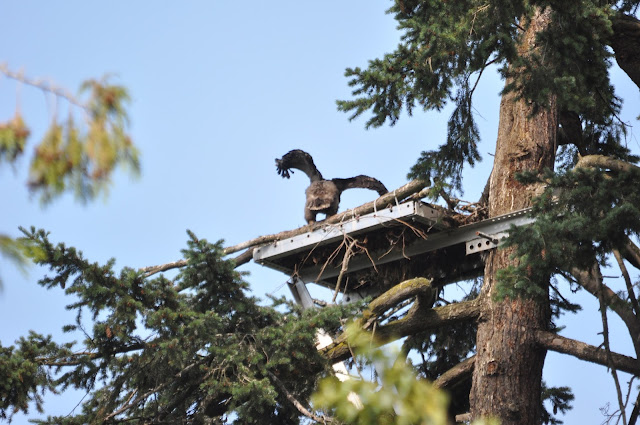 June 15
I am guessing this is Ethel.  She is being harassed by crows. 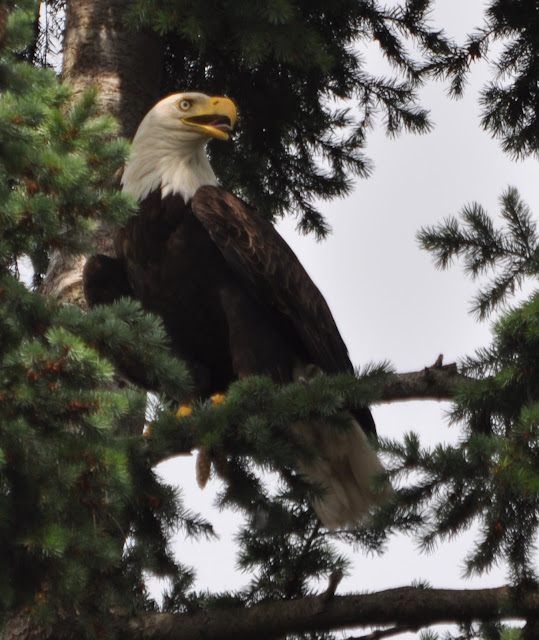 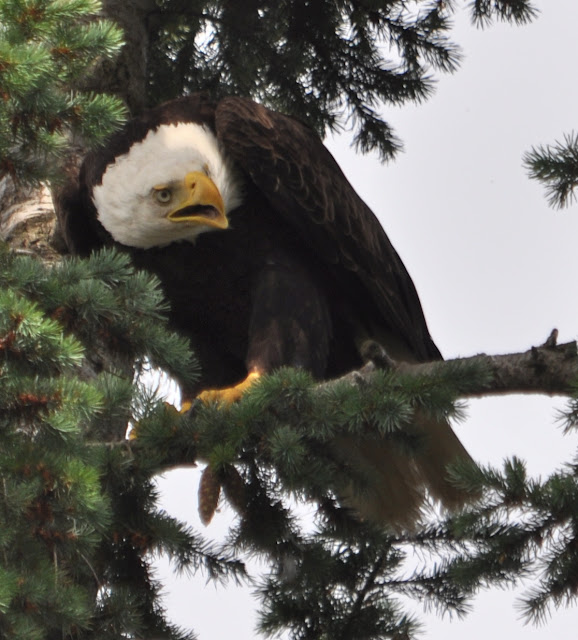 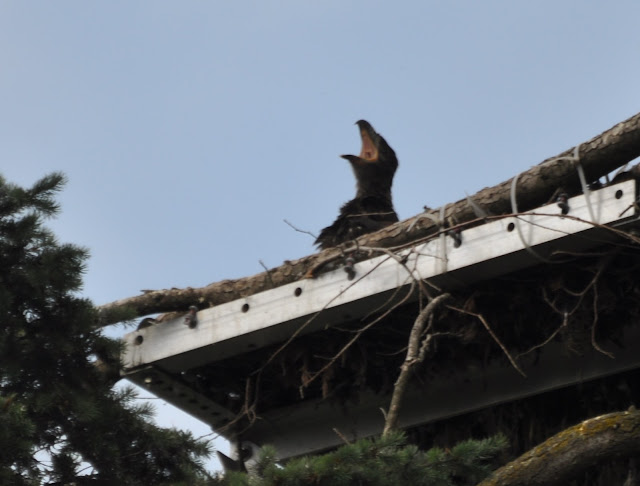 June 21
I am again guessing this is Ethel.  It is fascinating to me.. 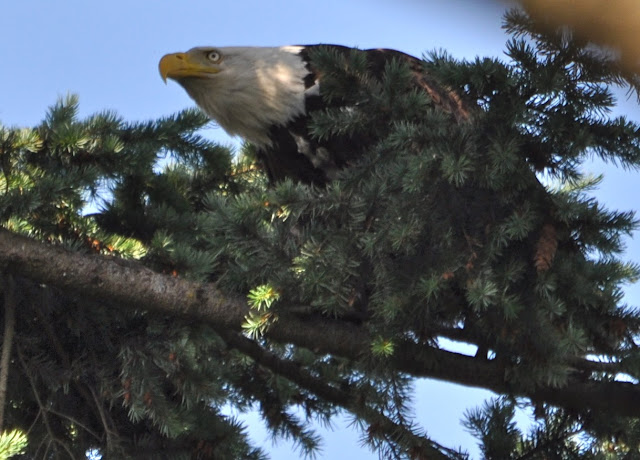 that as much as the crows and eagles are enemies, they also seem to have established some sort of tolerance in their relationship.  Crow and eagle face to their right.. 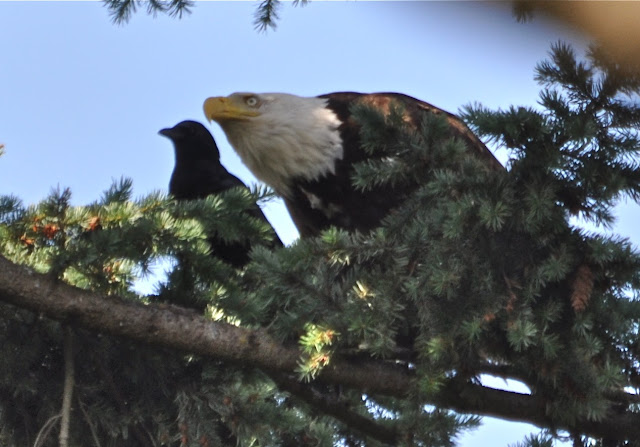 and then to their left. 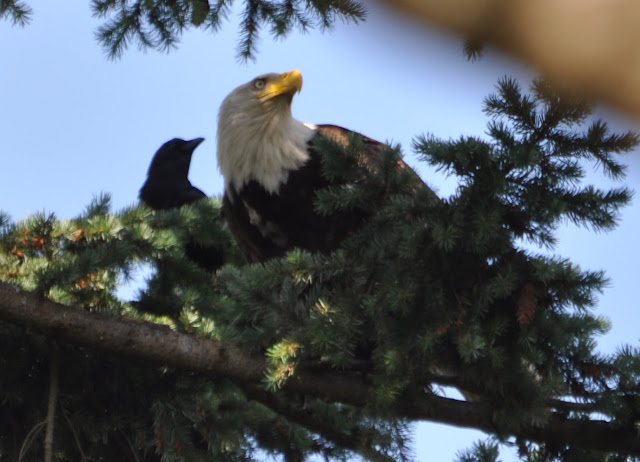 Crow leaves, but what I didn't manage to photograph is another one arriving seconds later.  They often work as a team. 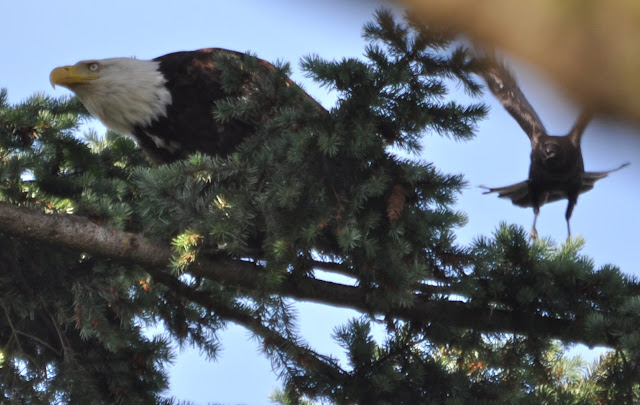 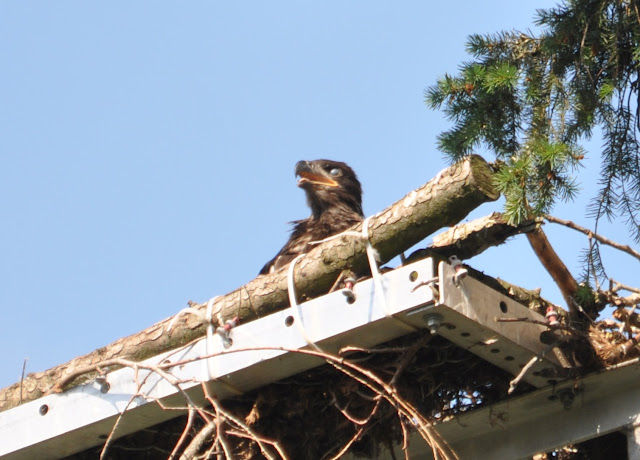 June 22
Just a day later.  Amazing wing span!  I wondered what the thing pointing up just to the right of Sisfro's body was and then realized (somewhat sadly) that it was a heron.  I do know that heron chicks are a popular food choice for eagles and the heron chicks grow very quickly, so the size would be about right. 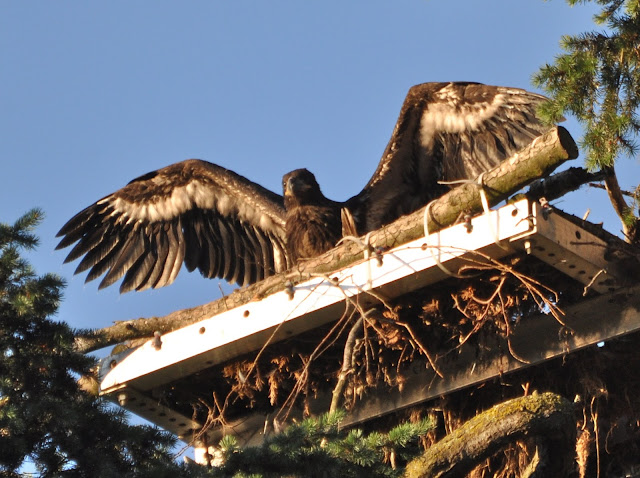 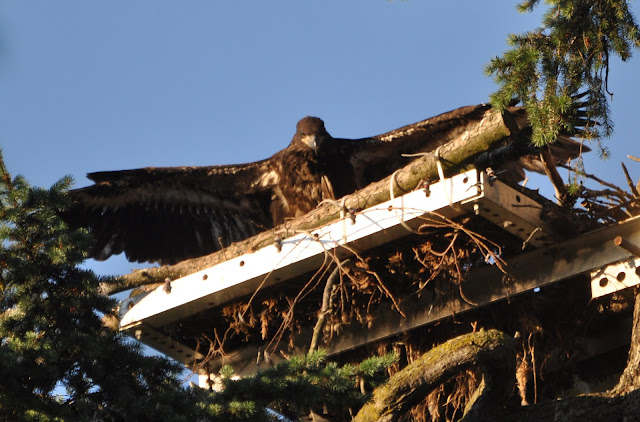 June 26
This was the first time I noticed what I thought looked like a hole in the nest.  Dave (I hope I have remembered his name correctly), who is quite the authority on Bert and Ethel's history, told me that the hole is not actually part of the nest.  You can see in the following photo.. 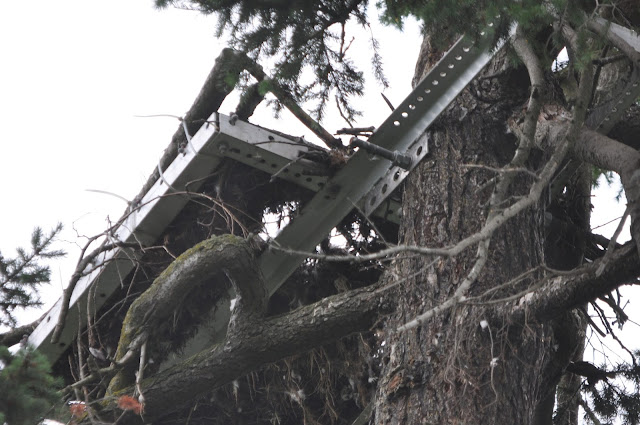 June 30
that it is more to the left and extending quite a distance under the platform.  It seemed to me that the eagles had done some work on that opening, but Dave explained that it was more like they had just rearranged a few sticks. 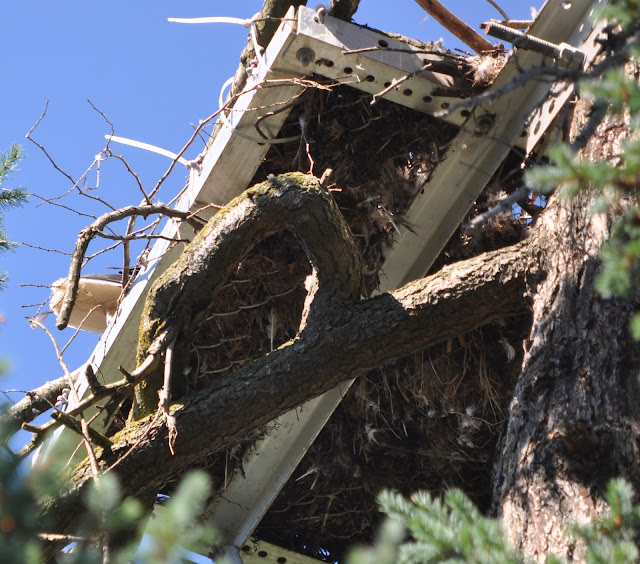 July 3
Sisbro had me worried here.  Exercising the wings can be perilous and his/her expression as s/he peered down suggested an accidental fledge might be in the works. 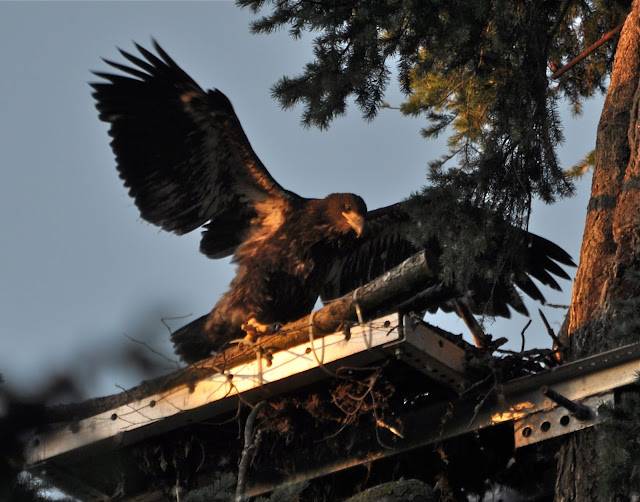 Luckily, all was well, but that right talon sure seemed close to liftoff. 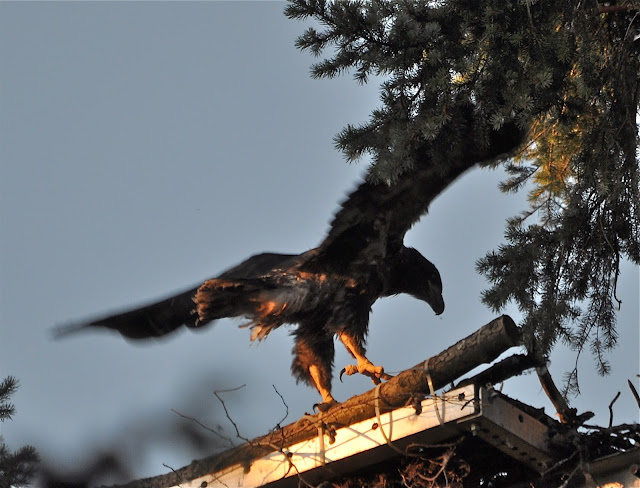 July 9
I visited yesterday and again this morning, but my best photos of Sisbro were taken two days ago.  Dave guesses that.. 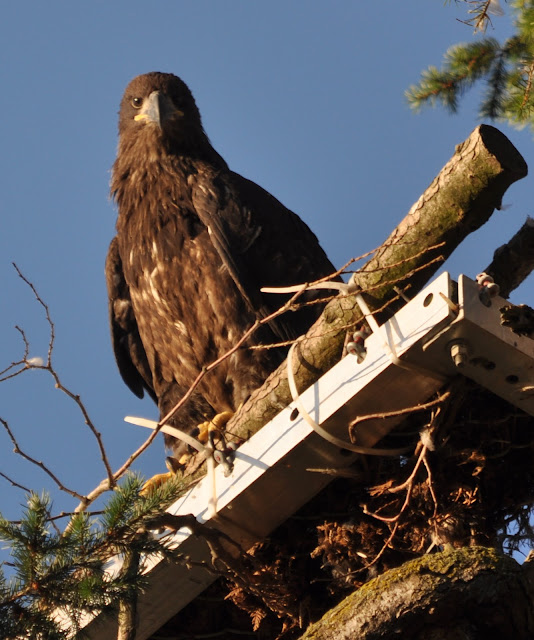 fledging should happen in the next four to five days.  Often, a gust of wind.. 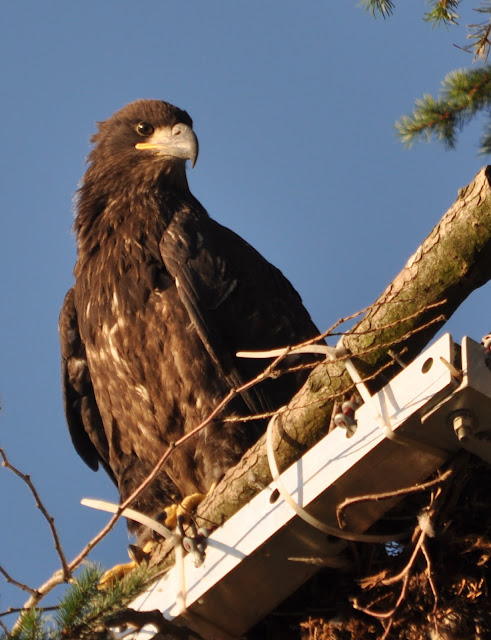 is the precipitating factor.  All the best, Sisbro.  I'll be watching for you.  It sure would be fun to see your first flight, but as long as it's a safe one, I'll be happy. 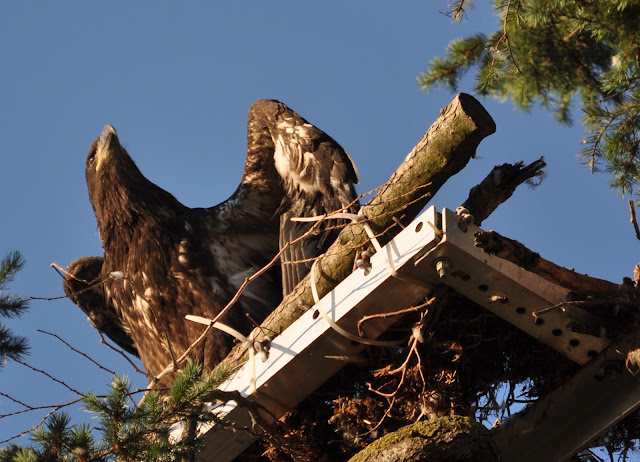 Hummingbird in my Neighbour's Garden
These hummingbird shots were taken on June 2nd in Jane's garden. 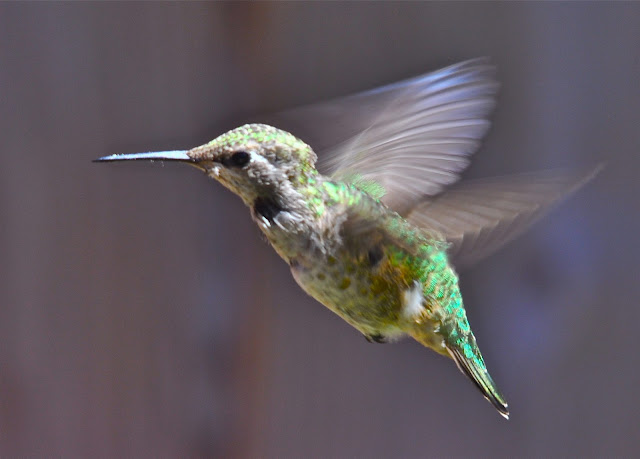 The feeder is a great help in catching flight shots.  I've been trying ever since to catch one that isn't at a feeder.. 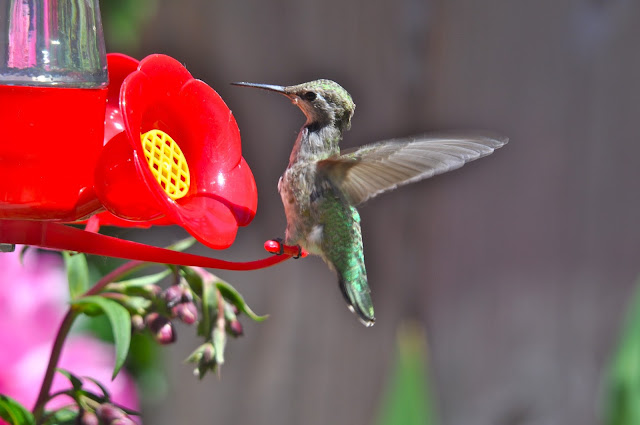 but the best I've been able to manage is this perched-on-a-wire shot taken last evening. 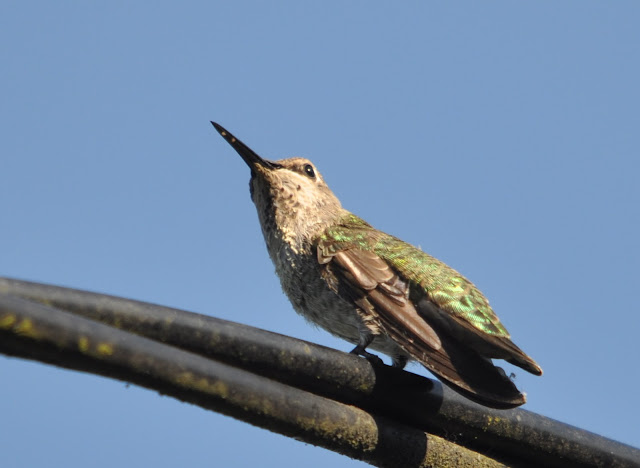 That is the post as prepared for Wild Bird Wednesday.  If you enjoy birds and want to read about them, there are many more stories at that wonderful blog meme.  Thank you, Stewart, for keeping it running!

Bill
Just a word to update those of you who have been following Bill's story (see previous two posts).  This photo (that I absolutely love) was taken at Deer Lake in May, a few days after he came home from the hospital after his surgery.  To be honest, he is struggling right now, as he nears the end of Round 1 of chemo treatments.  A day and a half to go, and then he gets a week off.  Two weeks on, one week off.  Seven more rounds to go.  No quick and easy battle here, but I remain hopeful that we will weather this time of struggle and grow stronger because of it.  I love you, Bill. 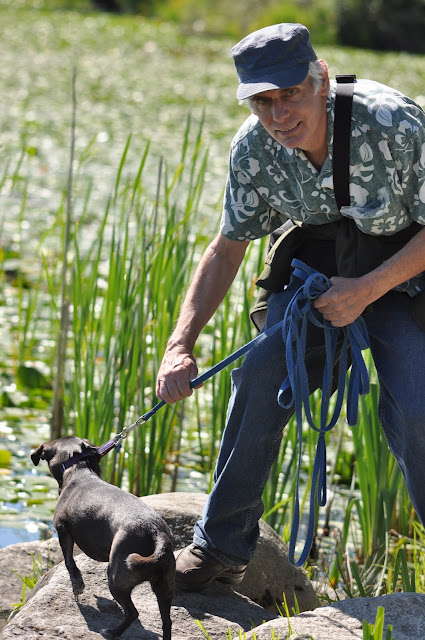