Critters, past and present, for Eileen's "Saturday's Critters"

Because there was a gap between March 18, 2015 and January 4, 2016 when I didn't blog, I have a ton of critter (and other) photos waiting around in my iphoto to share with Eileen for her Saturday's Critters meme.  (Thank you so much, Eileen!) These are from March 21st, 2015, when Bill and I bundled Black Jack into the bicycle basket and rode to Jericho Beach.

There is an eagle pair (Ethel and Bert) that has been around that park for many years.  That day, we were excited to see that one of them had gathered some.. 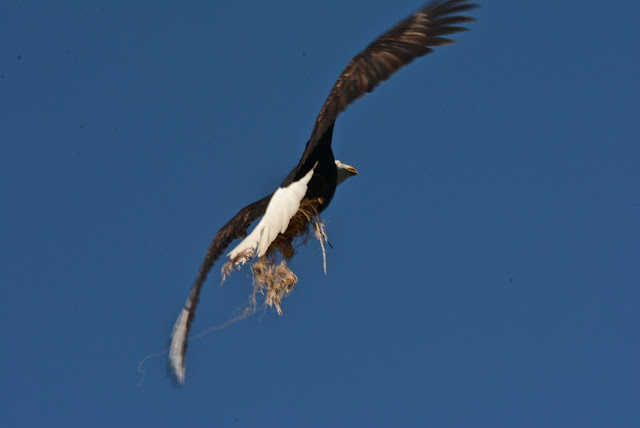 nesting material and was taking it to the.. 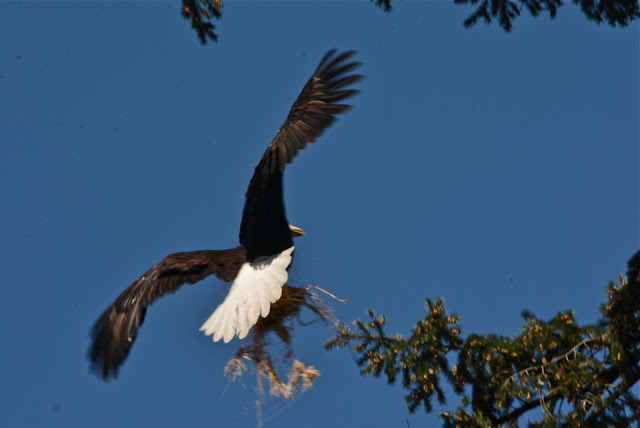 platform that wildlife people built because Ethel and Bert.. 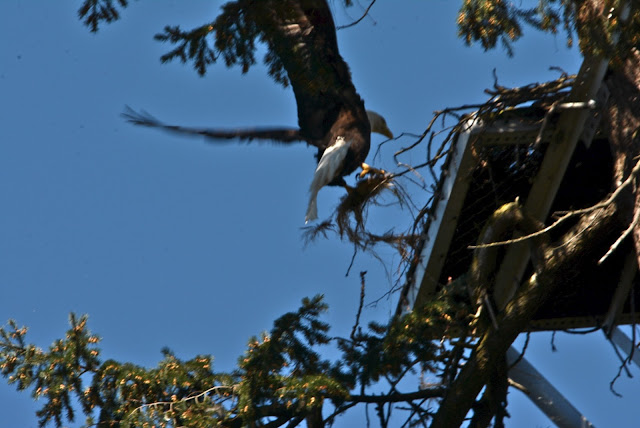 have had nest upon nest fall to the ground.  Rescuing their young after these falls has had some success but still, it was deemed a good idea to try out the platform idea, and that has worked out well.  You can read more about these eagles here. 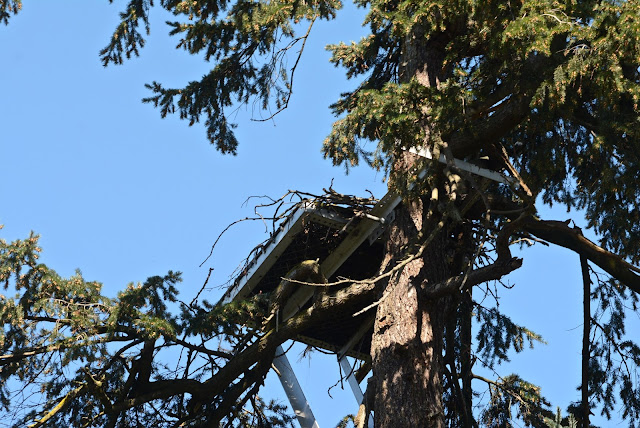 While we were there, we enjoyed watching seagulls.. 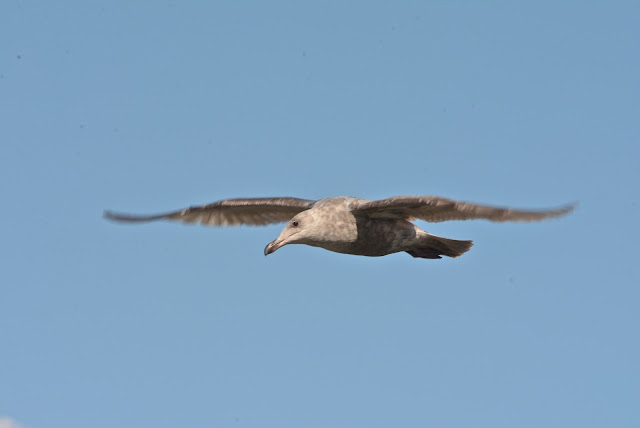 flying around the fishing dock in the hopes of catching some leftover crabs. 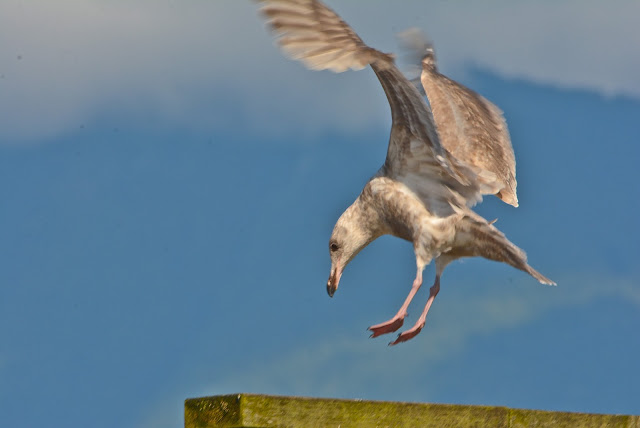 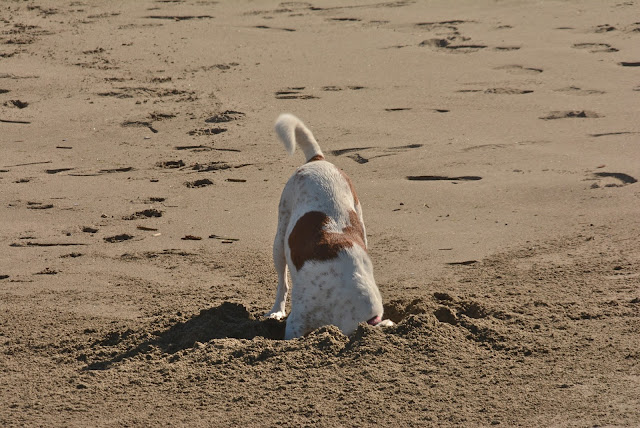 at this happy dog.. 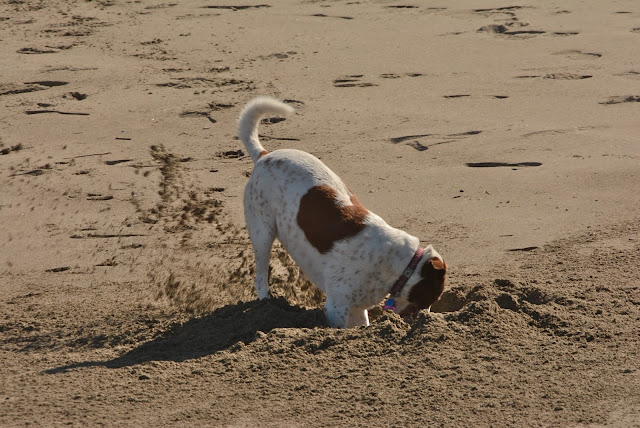 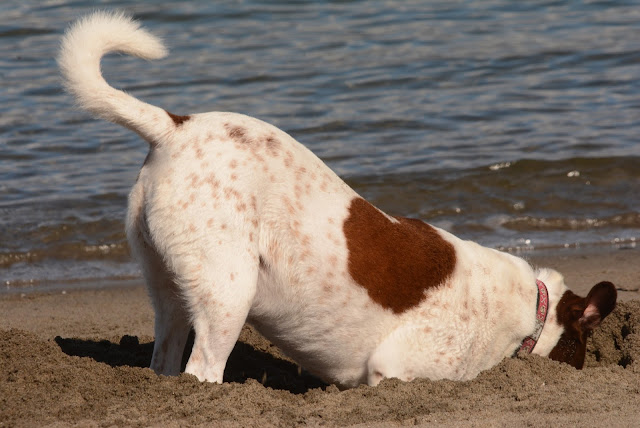 ever deeper into the sand. 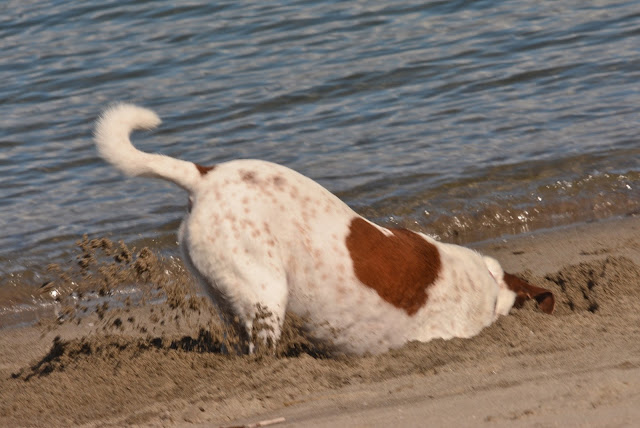 Bill, laden down with everything we had brought along for the ride, still had energy to smile as he followed Black Jack over the rocks and along the beach. 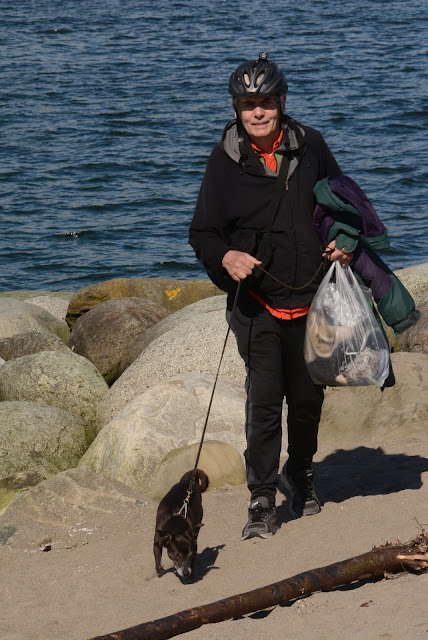 We saw some Barrow's Goldeneyes by the dock.. 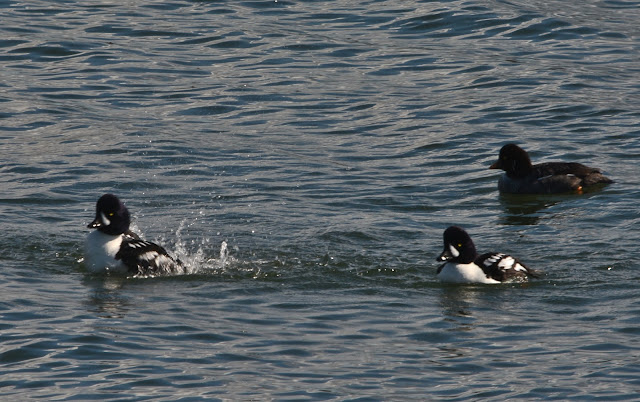 and then we walked our bikes to the little bridge over a nearby pond.  Black Jack watched the action from her basket. 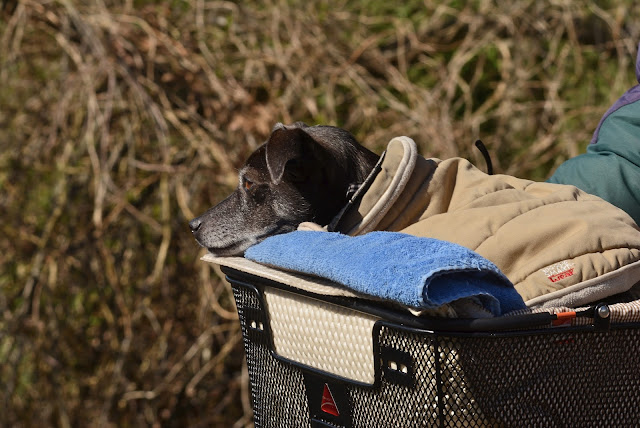 There were some Ring-necked Ducks in the pond.. 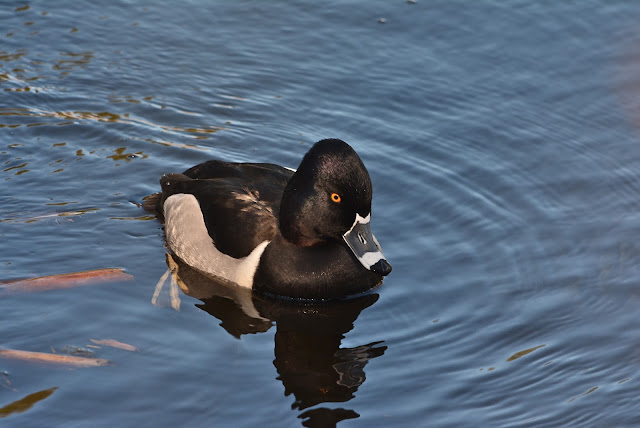 and also some turtles. 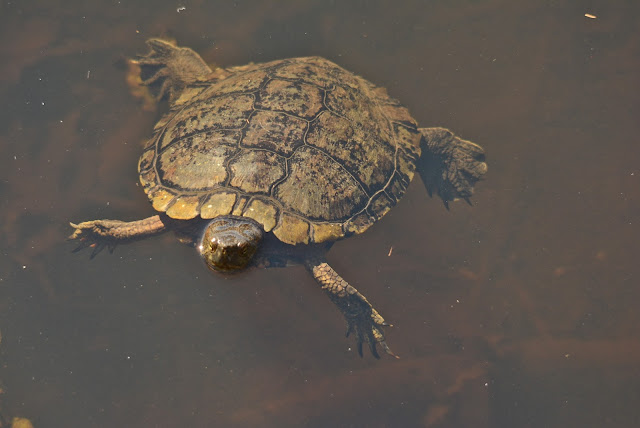 I was happy that the sun caught the "ring" in this male.. 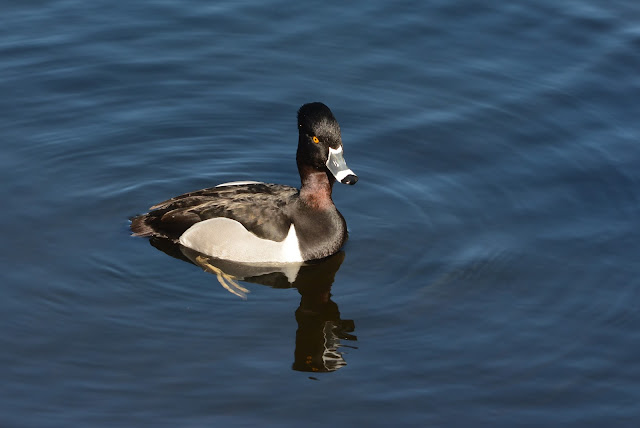 and his mate's colours showed up nicely in the light as well. 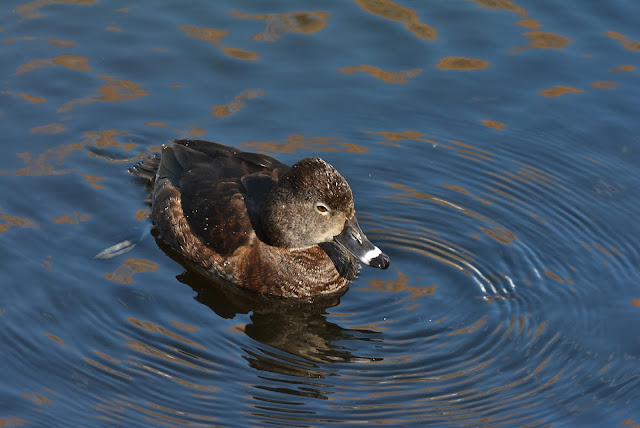 Here's a close up of Mrs. Ring-Neck.. 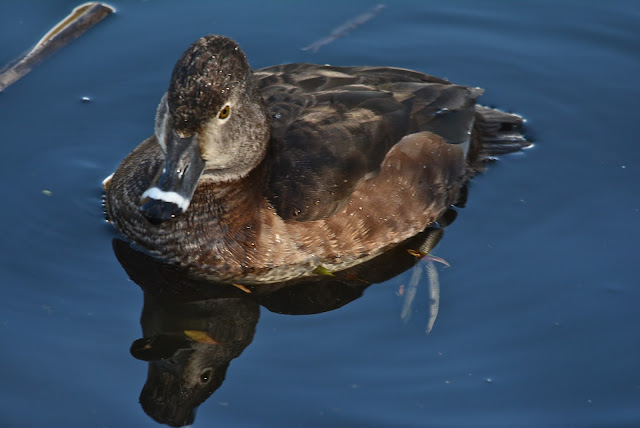 and also one of the turtle.  S/he looked up because of our shadows as we leaned over the railing. 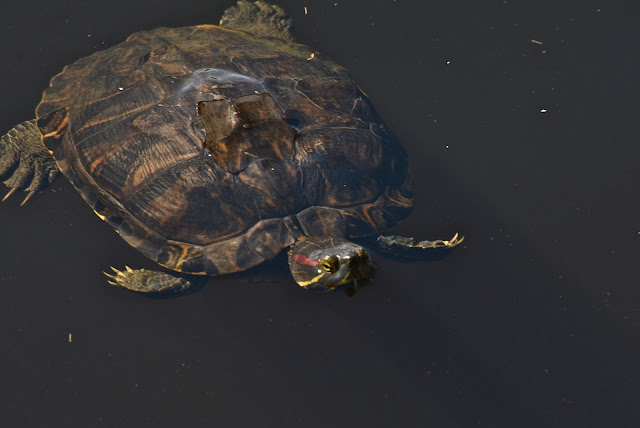 Many people throw food in the pond for the ducks and turtles There are signs asking them not to do this, and the bread offered most frequently is the last thing turtles and ducks need, but sadly, they believe they are educating their children about wildlife. 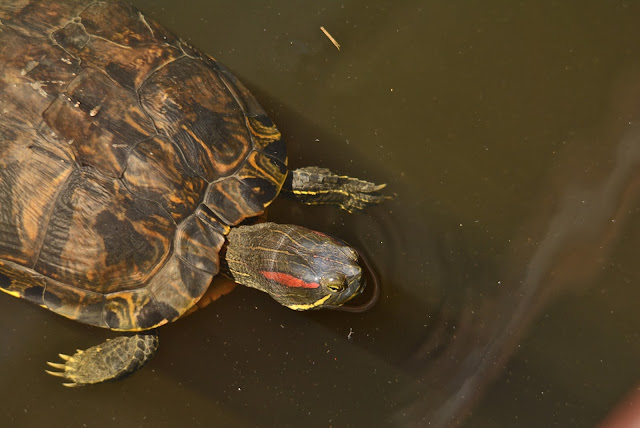 I have to admit that the side benefit for me is the opportunity to get close-ups. 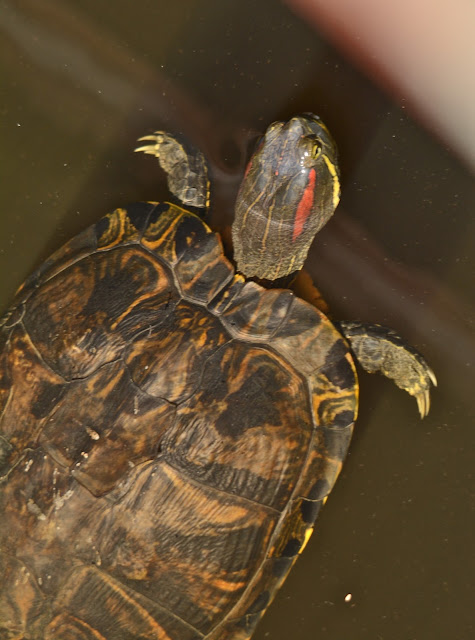 A post without a recent photo of Black Jack wouldn't feel right.. 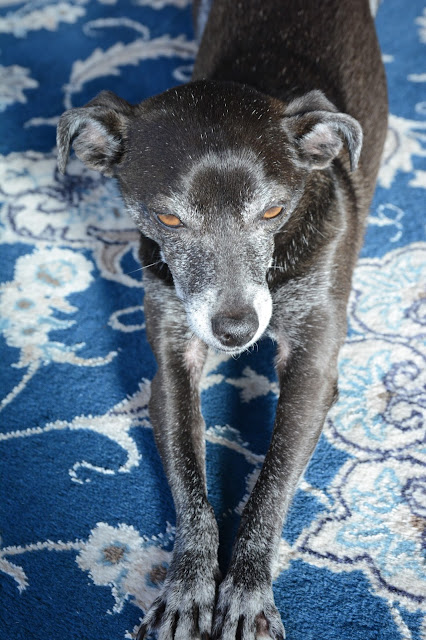 so here are a couple taken this morning.  She stretched for me, and then suddenly looked up at a bird in the tree outside the balcony window. 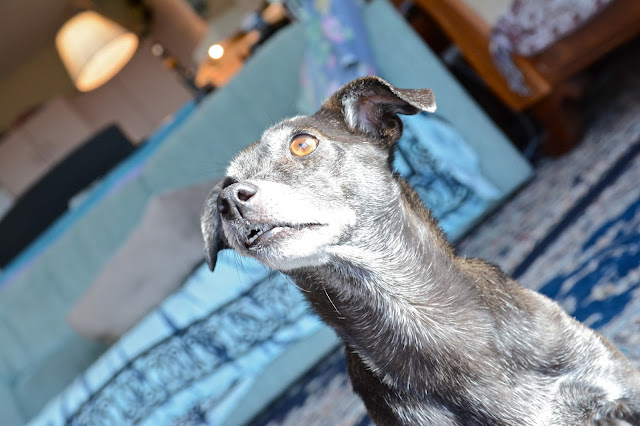 Bill isn't officially a critter :) but I like to have a recent photo of him in most of my posts, so here is one taken at our favourite café/art gallery yesterday.  We were working on a Sudoku while Black Jack sat on Bill's knee.  She kept an eye under the table, just in case there might be a crumb or other food item dropped. 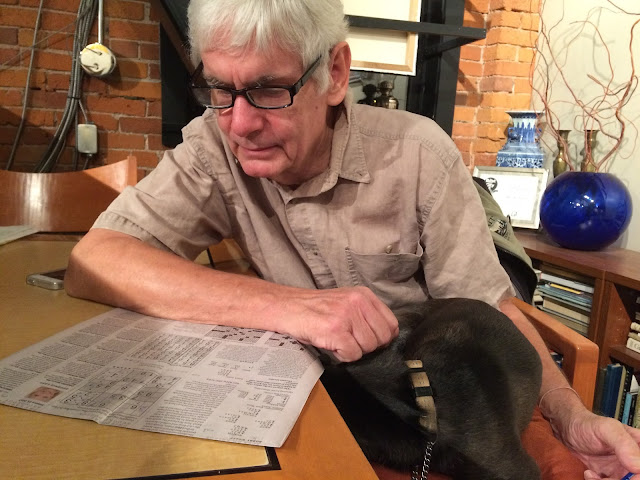 We still do crosswords almost every day and we both get a lot of pleasure out of Sudokus.  I think that shows in Bill's face. Black Jack has almost disappeared, but Bill makes sure to keep her safe.  He multitasks well. :) 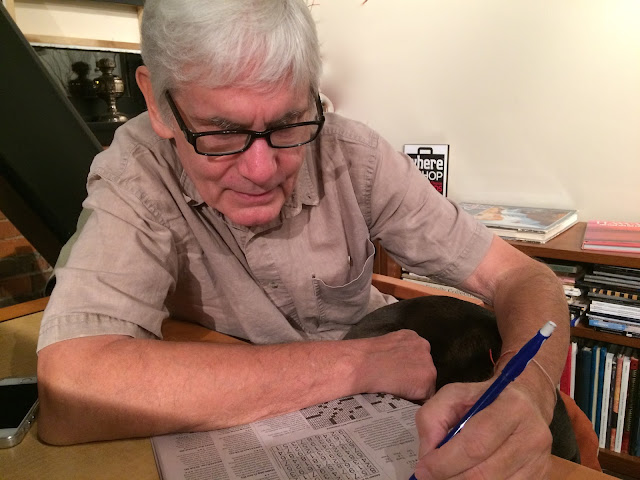 I loved the way her paw draped over the bed that we bring along to keep her comfortable. 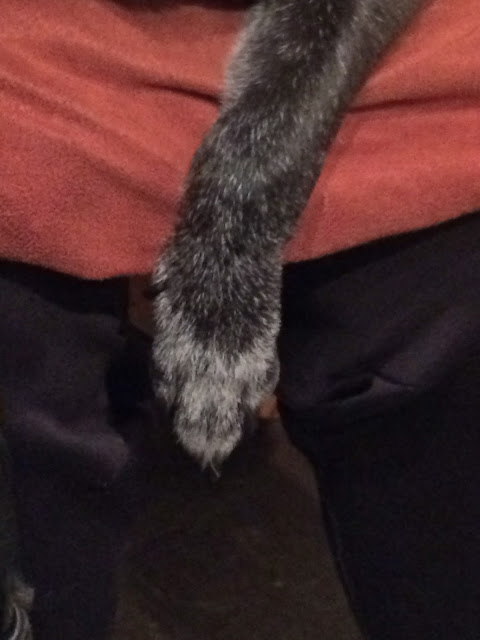 That's the critter post for today.  Thank you so much for stopping by.  I know you would love Eileen's meme, so head on over there to see many more critters from around the world.
Posted by Black Jack's Carol at 1:26 PM