We both had dentist appointments yesterday.  The office of BC Perio is directly opposite our apartment building, on the other side of False Creek.  We took the skytrain there, from Roundhouse Station to Broadway Station.  Only two stops, so a very easy trip.  As we walked out of Broadway Station, the light in the distance was highlighting The Lions.  I used my 500 mm lens to catch a shot of them. Sometimes, it seems to me, they can be seen no matter where I go in Vancouver.  When I worked in North Vancouver, they were visible from my school.  When we use the bike path along False Creek, we see them near Science World.  Sort of like the Mona Lisa, their eyes follow us. :) 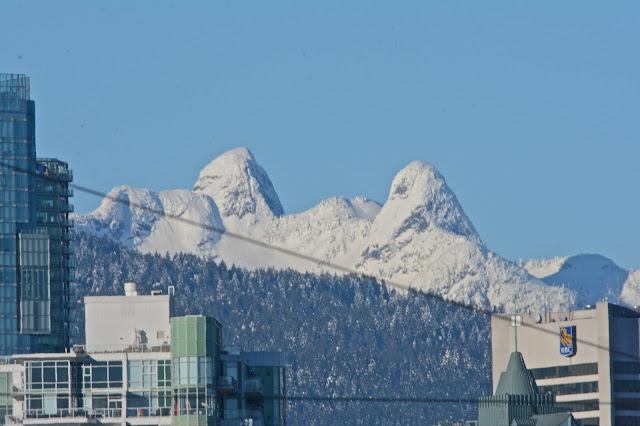 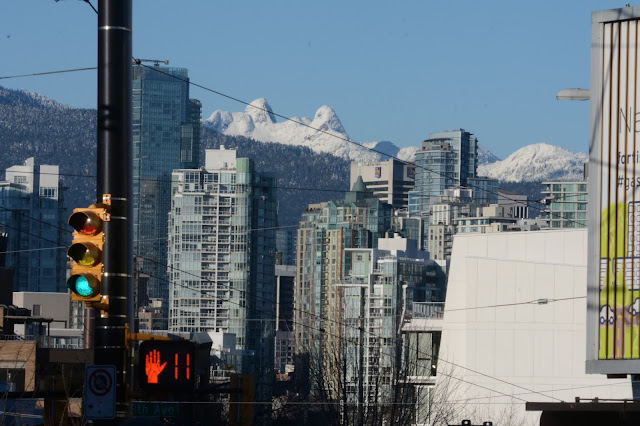 As we crossed the street at the corner of Cambie and Broadway, Bill kept a close eye on the traffic light while I stopped right in the middle to catch this shot.  I cropped it to show BC Place in the background and the Cambie Bridge with its red banners. 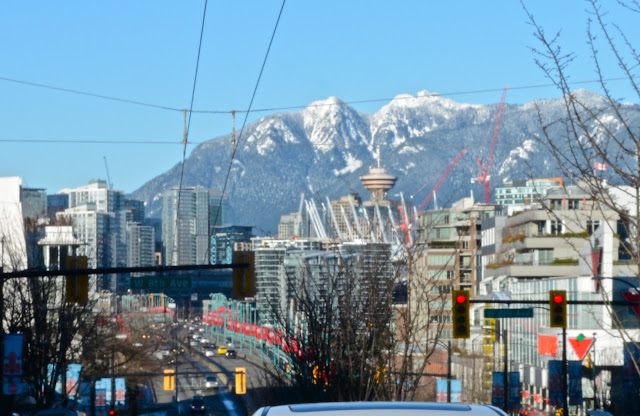 Here's the view as we looked into the waiting traffic.  The people in their cars were a bit amused, or perhaps concerned, by the camera facing them. 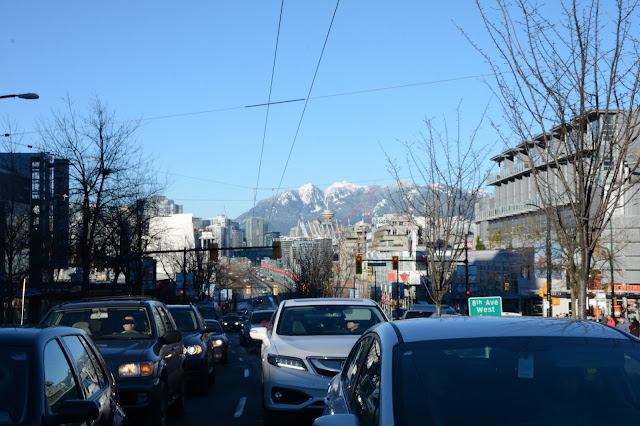 Bill's cousin, Maryel (shown in my last post) has taken up the hobby of drawing.  She showed us her wonderful representation of an owl and I was immediately inspired to give drawing a try myself.  A huge step, since I have mostly been confined to stick men drawings, and poor ones at that.  We had no art instruction in my school days and drawing has always seemed like a mysterious talent to me.  When Maryel sent me a little message with suggestions for basic supplies to begin sketching, I showed it to Bill, and his encouragement was all it took to decide to buy the items she suggested.  As we walked along Broadway to the dentist's, we passed Michaels Arts and Crafts Store, and so I am now the proud new owner of.. 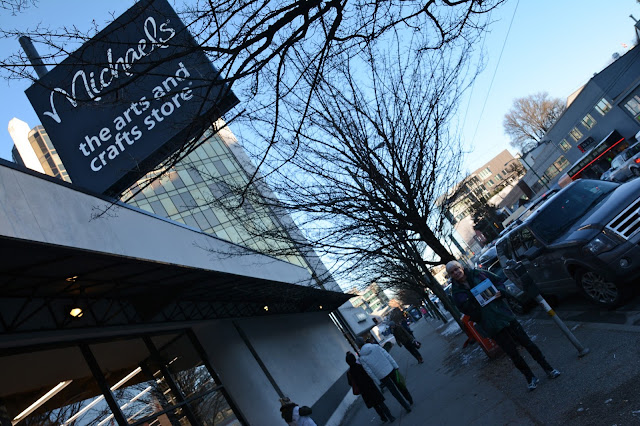 a beginner drawing and sketching set.  Hopefully, I'll have something to show for it in the next couple of weeks.  In the mean time, if you see this, Maryel, I'd love you to send me a photo of your owl to show to the world. 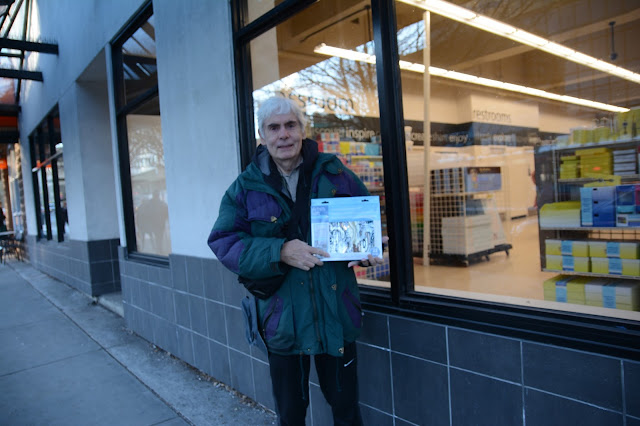 I don't know how many people are privy to a magnificent view like this as.. 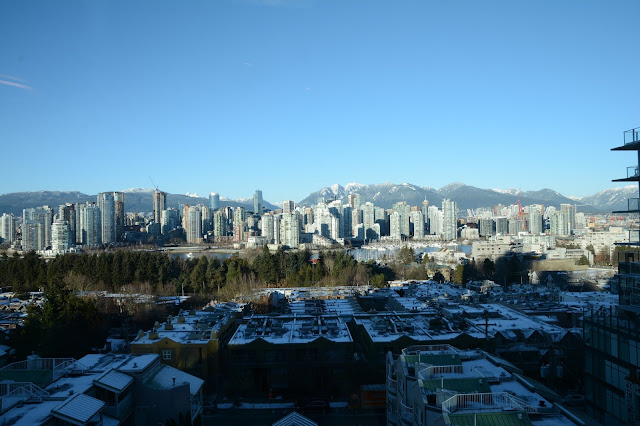 they sit in the dentist chair.  Morag, Dr. Kleinman's assistant, saw my camera.. 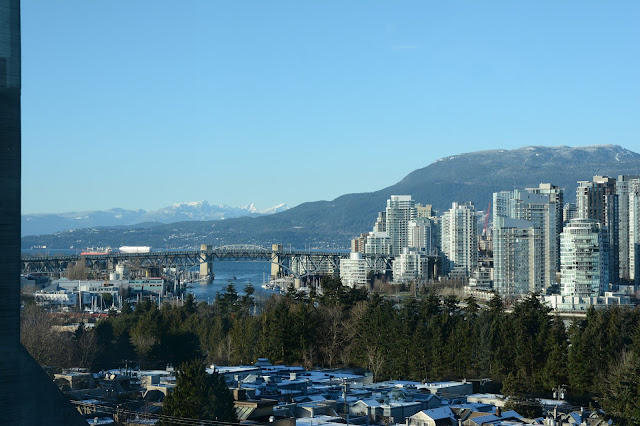 and insisted I check out the view over False Creek from every vantage point. 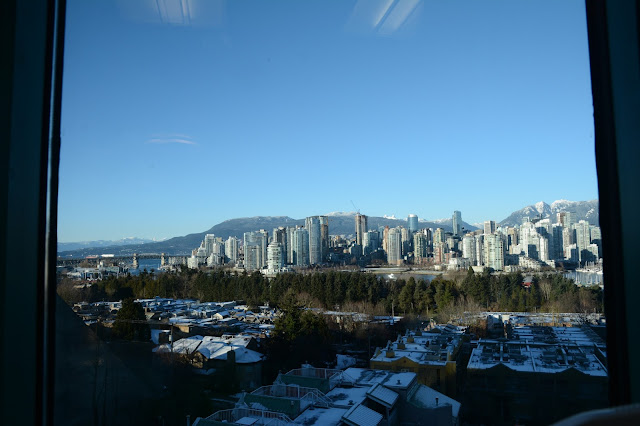 She even took me to the side window to catch a view of Broadway Street. 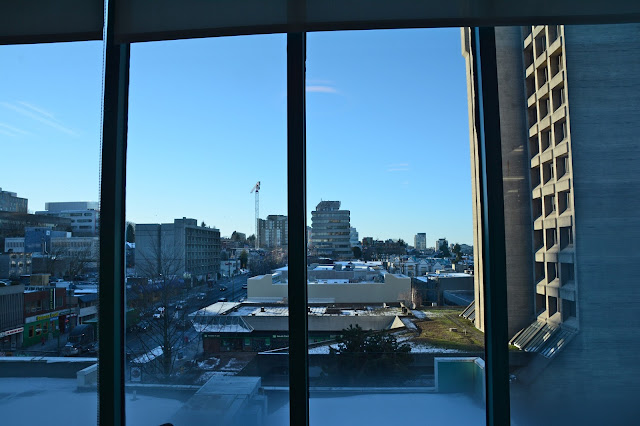 We can see our apartment building in this shot.  It is one of the three pink-brick buildings just a little left of centre. 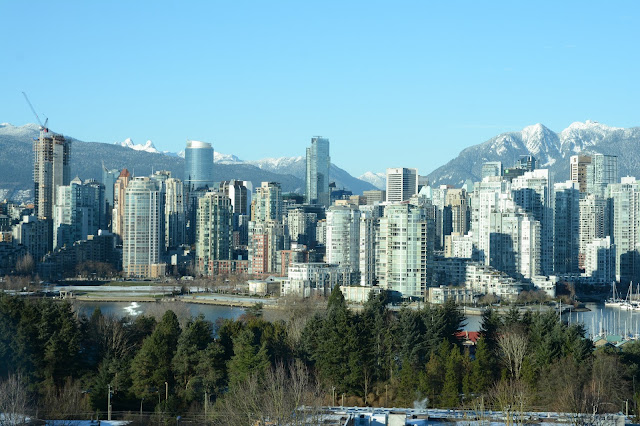 We both had our appointments at the same time but I finished a little sooner, and Barbara, Bill's hygienist, kindly let me take this photo. 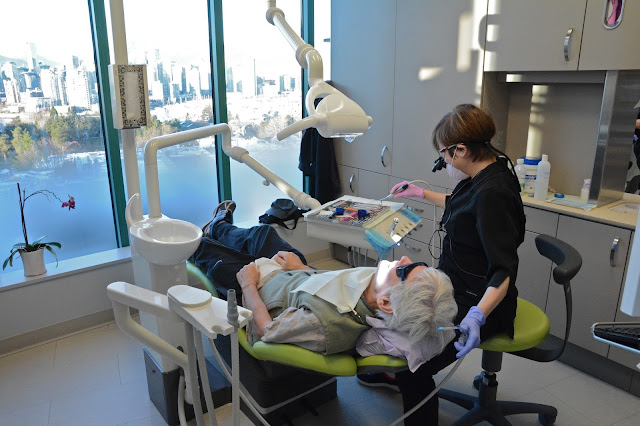 At the end of my appointment, Morag called me to take another photo.  "Look!  The light has changed," she exulted.  Honestly, every single person who has looked after us at BC Perio (Dr. Kleinman, Dr. Birdy, Sharron and all of the others at the front desk, Janice, Barbara, Sheryl) seems to go above and beyond, not only to give our teeth stellar care but also to keep us as happy as possible in the process.  I am very, very grateful to have found Dr. Kleinman many years ago when I moved to Vancouver, and through him, to the others at BC Perio.  (They don't know I'm writing this post, but seriously, if you are looking for a dentist, you might want to give BC Perio a try.) 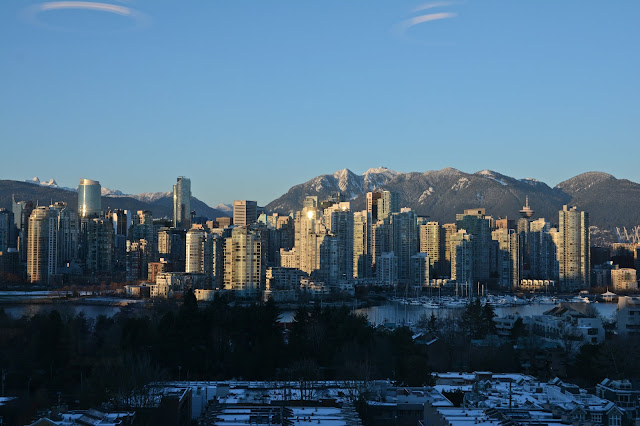 Sun spot on a highrise, 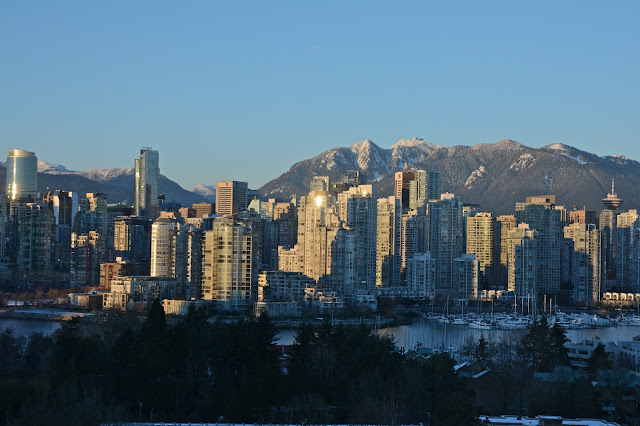 and one more view to give you a sense of the panorama before my eyes.  Those are my thoughts for today.  Many thanks for stopping by. 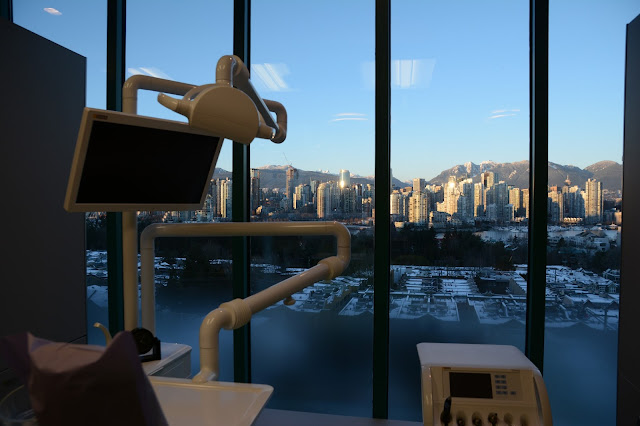