It is Blue Monday and time to share some blue-themed photos with Smiling Sally's meme.  Many thanks, Sally, for that fun project.  Hard to believe you will have been showing us the colour blue each week for seven years, as of the first Monday in September.

It was easy yesterday for Bill and I to see lots of blue around Vancouver.  Though we are in the middle of a drought, and celebrate every drop of rain the sky can squeeze out, we also celebrate the blue skies.  This very tall bloom was by.. 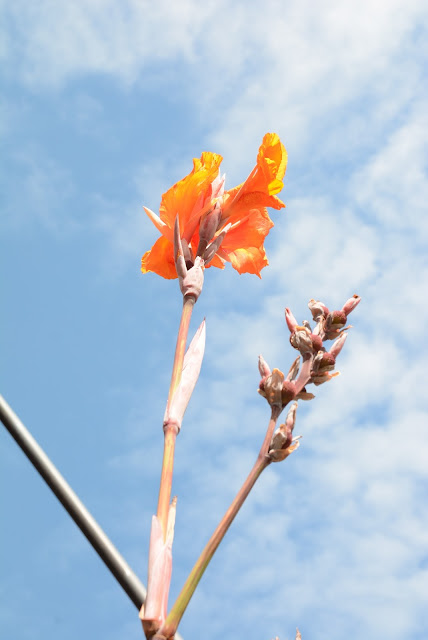 Earl's Restaurant at the corner of Mainland and Helmcken Streets.  By standing at the bottom of the steps and looking up to the sky, the bloom's height seemed to rival anything Jack, of bean stock fame, might have climbed. 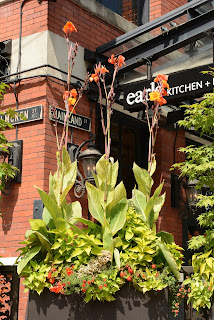 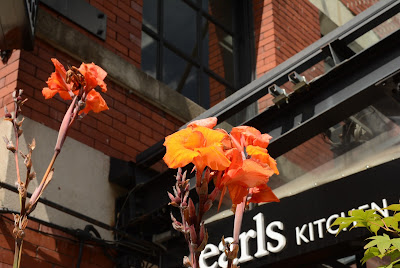 As we walked to the Jazz Vespers concert at St. Andrew's, it seemed the clouds only served to emphasize the rich blues all around us.  Below, I thought the Wall Centre building (on the left in the photo below) rose almost as magnificently as did that tall bloom.  Here is a Wikipedia paragraph about the musical connection to its construction.
"To counteract possible harmonic swaying during high winds, One Wall has a tuned water damping system at the top level of the building which consists of two specially designed 50,000-imperial-gallon (60,000 U.S. gal; 227,300 L)[5] water tanks. These tanks are designed so that the harmonic frequency of the sloshing of the water in the tanks counteracts the harmonic frequency of the swaying of the building." (More fascinating info at this link.) 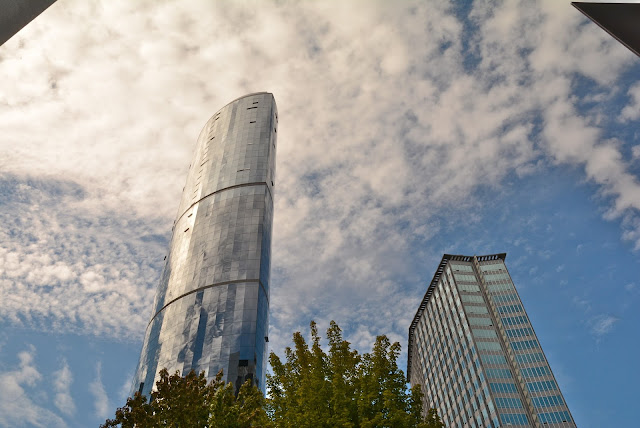 As we arrived at St. Andrew's, I looked across the street at The First Baptist Church.  I was still thinking in terms of blue skies, but somehow, my iso was at 6400 and so the image result was not quite what I planned, but still rather fun. 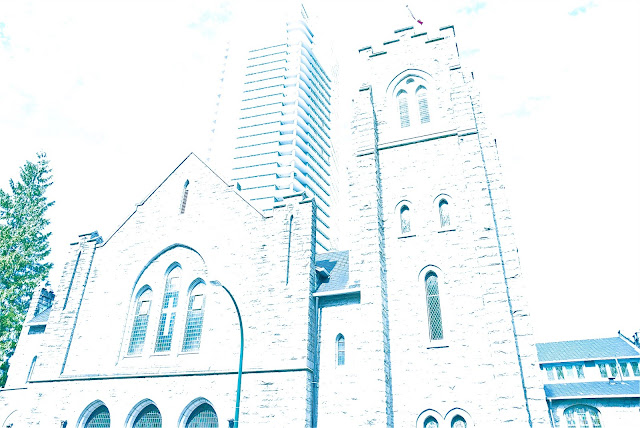 I corrected the iso and managed a more realistic portrayal of the First Baptist Church in this shot. 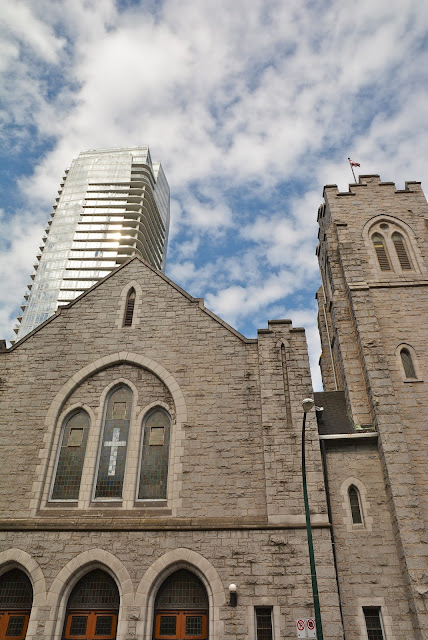 And, speaking of over-exposed photos, I am going to slip back to Saturday for just a moment, to show you three shots that I thought were rather fun.  This one was of high rises reflected in False Creek.  I flipped it upside down, added some blue (just the iphoto program that comes with the laptop) and thought it looked like a lady's skirt with a wavy hem line. 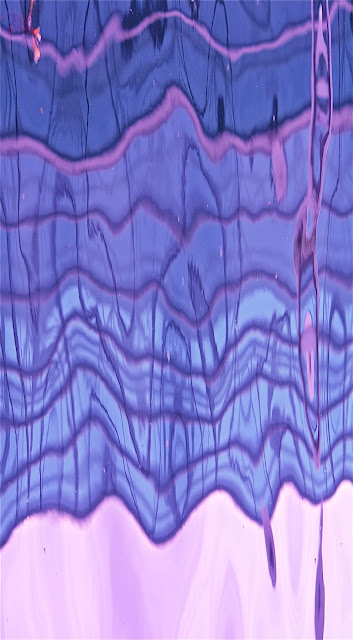 This was the gentleman introduced in yesterday's post.  My flash accidentally came on when I tried to take his picture; bright sun and flash produced this result. 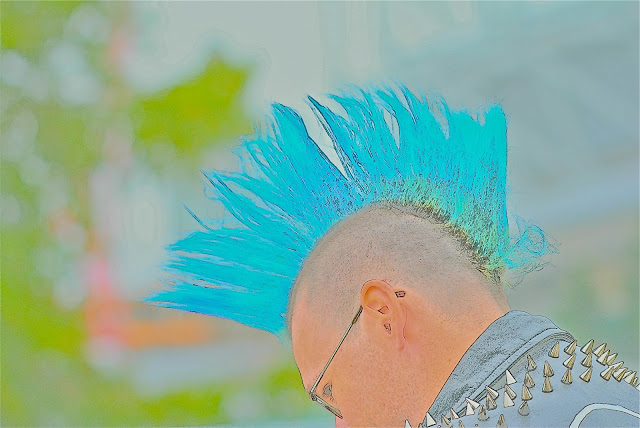 I think it is rather neat.  I've never known anyone with a Mohawk cut and was curious to know how much care is required to keep it standing upright.  In fact, there are many sites that go into detail about the process and care of a Mohawk cut.  Here is one link if you are considering a future foray into such a hairdo.  The blog writer's advice at the end of the post to make sure to "be comfortable in [one's] own skin and to have fun" seem to have been the philosophy of this gentleman.  I thank him for being such a good sport. 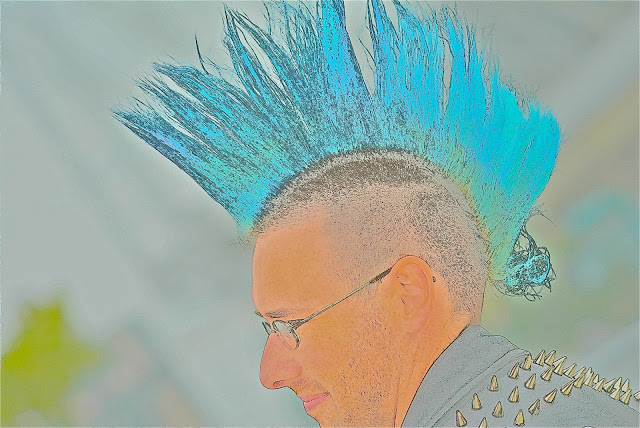 For anyone who didn't see the version with more realistic camera settings, here is a shot with a passer-by (in blue) perhaps reacting to the hairdo. 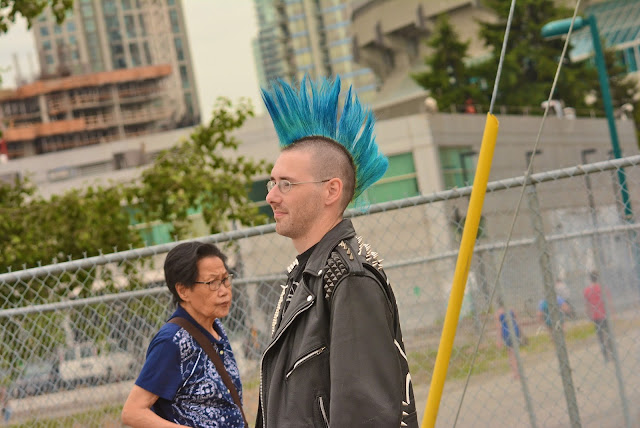 Bob Murphy, the pianist and leader of the jazz ensemble that accompanied vocalist, Monique Van Dam, at the Jazz Vespers performance, was extraordinary.  When he had a solo, the joy in his playing was palpable. His fingers flew, his face broke into a smile that threatened to break into full-out laughter, and one had the feeling he was born with music emanating from his pores. 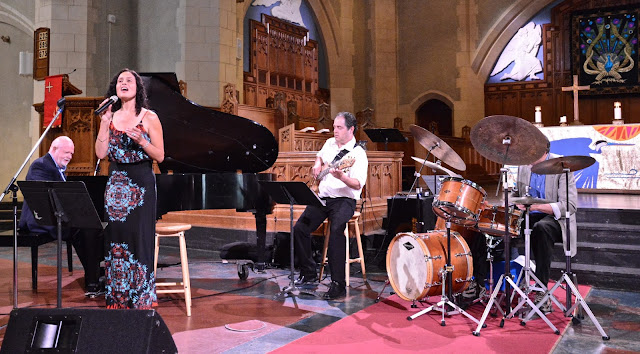 Monique, his life partner and friend, sang a series of love songs with honest emotion and conviction.  Though her voice was powerful, there was a kindness, a gentleness of spirit, that came through both when she sang and when she interacted with the people around her.  We left, feeling enriched. 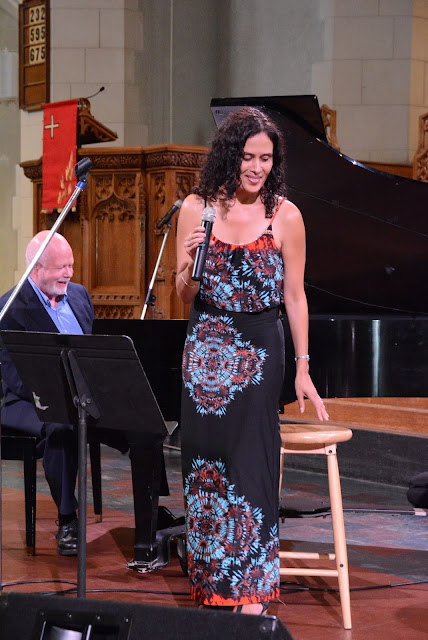 We have heard Buff Allen quite a number of times at Jazz Vespers.  What a talented and savvy drummer!  He is very difficult to photograph.  It seems sometimes that he uses his cymbals as shields, but my goodness, it would be hard to find anyone more in sync, in every sense of the word, with the musicians around him.  He seems to understand what they will do before even they do. 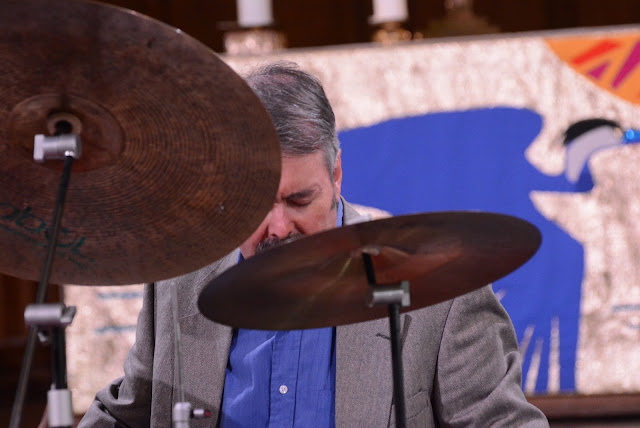 I didn't know Miles Fox Hill, but wow, were we ever in for a treat.  He, like the others in the ensemble, emanated joy in what he did.  He is technically brilliant, but more than that, he loves and breathes music. 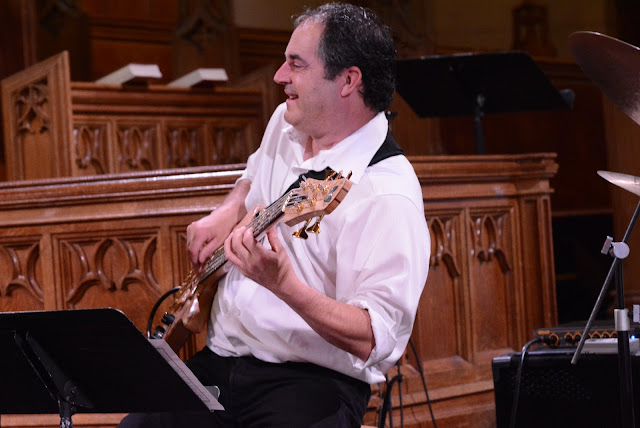 They kindly agreed to stand together for a moment after the concert.  As you can see, Sally, they had quite a bit of "blue" between them :) 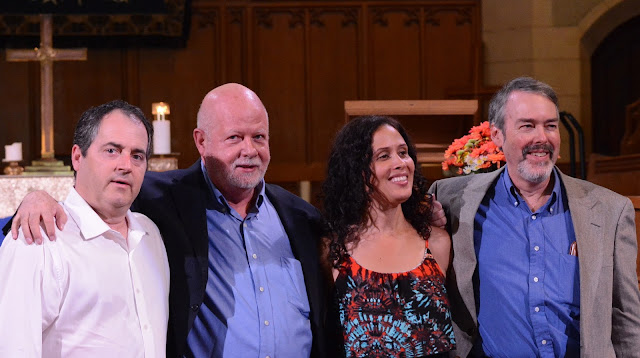 Walking home afterwards, we passed the Wall Centre again.  They were set up for a reception that I guess would happen in the early evening.  I couldn't resist the sun sparkles on glass, and used iphoto to colour this shot blue. 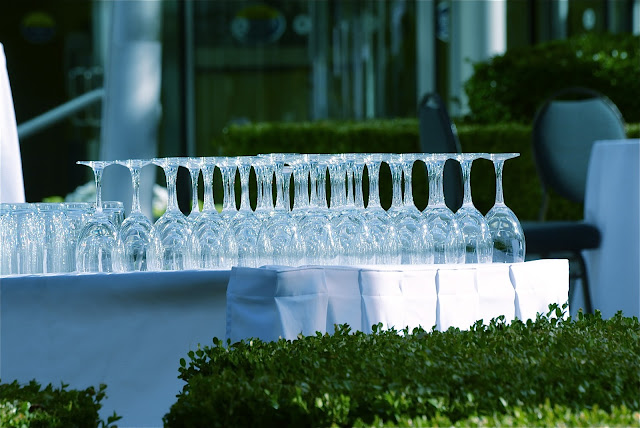 Here is the glassware as it really looked. 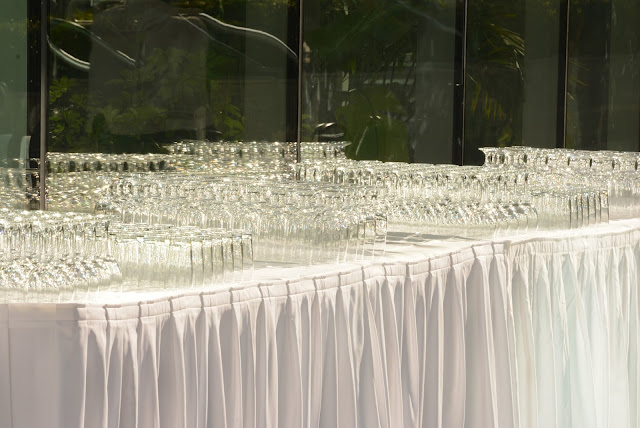 A blue bike, also passed on the way home, 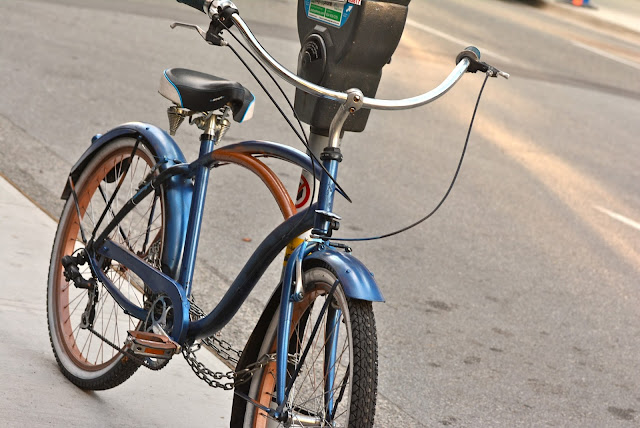 and this apartment building in mid construction, with blue sky.. 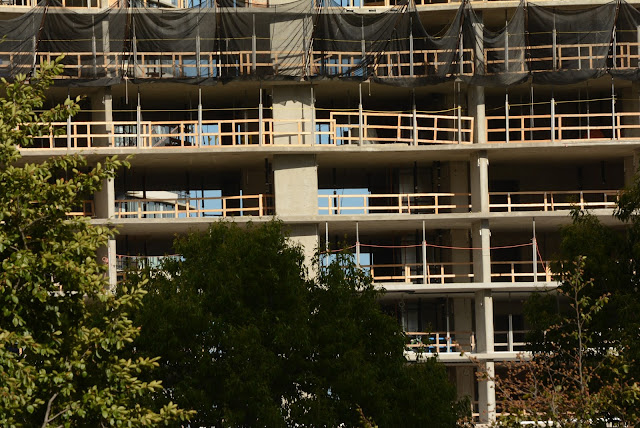 showing all the way through from front to back, 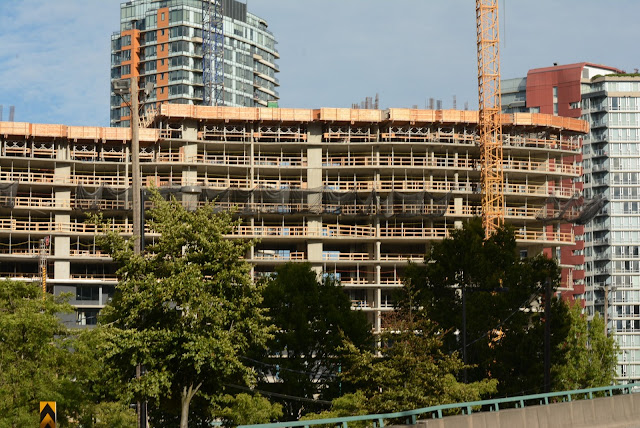 kept the blue theme going until we arrived at False Creek.  I hadn't taken a photo of Bill yet, so he clowned around in front of these blue bins just for Sally. 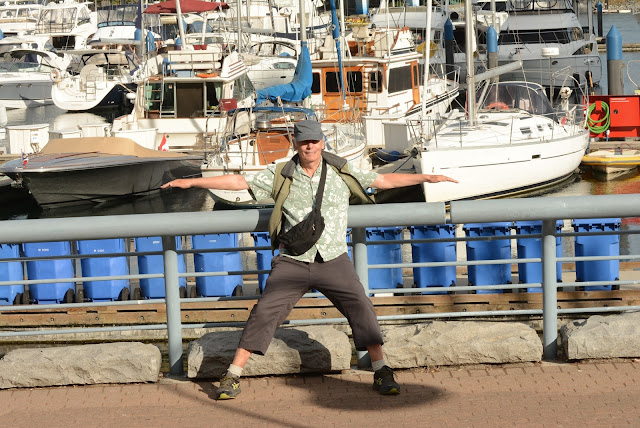 Then he did his debonaire look (beautifully, I might add) but Black Jack was.. 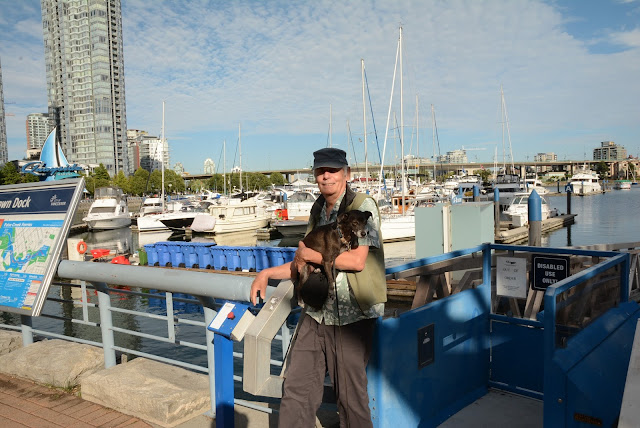 a bit less than her usual attentive self.  She perked right up when this happy.. 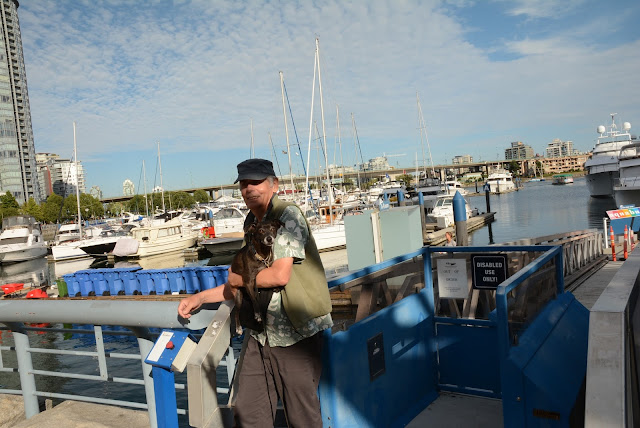 lady noticed and interacted with her.  Just one more of the many wonderful people we meet on our outings.  Black Jack's interest had wavered again by the time I took the photo, but all in all, we called it a wonderfully "blue" day.  Many thanks for stopping by. I hope you are enjoying this Monday fully and with gusto :) 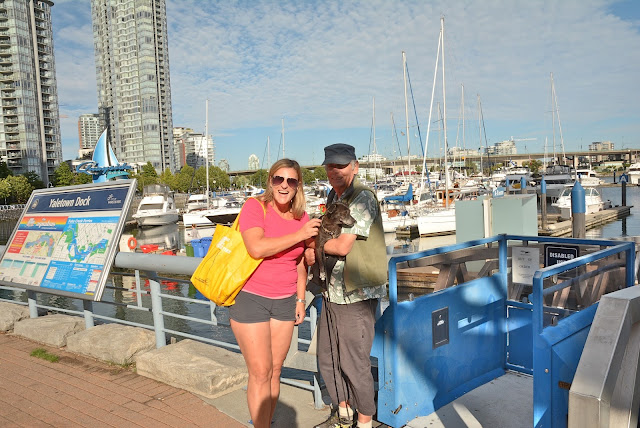