We rode our bikes to 2nd Beach on Monday. There was snow in the morning, but the sun came out in the afternoon, and for the first time since Christmas Day, the bike path was free of slippery patches.  I've finally (thanks to Bill) figured out how to add an arrow and some text to show you approximately where "home" is on the map.  We rode alongside False Creek and then followed the shoreline of English Bay.  I was euphoric just to be on the bike, but the blue skies didn't hurt either :) 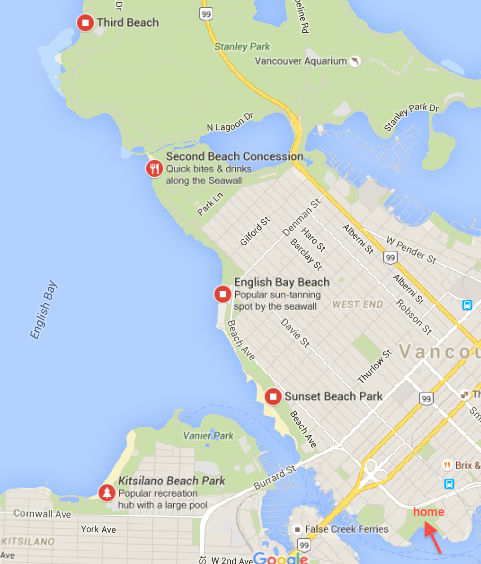 A few Surf Skoters were in the bay. 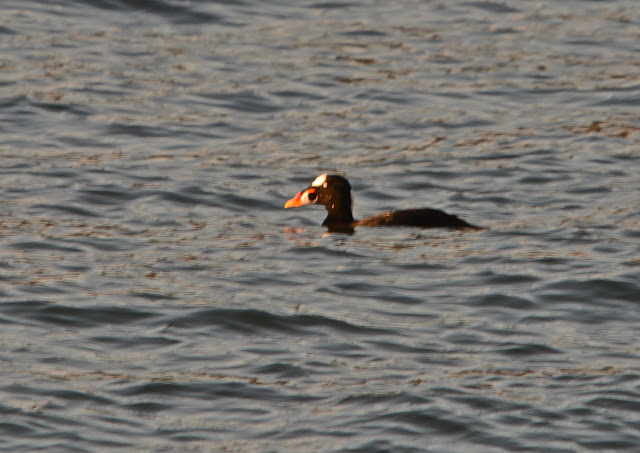 I've never managed a good capture of these birds but always love to see them.

Far in the distance, three other birds made their way across the bay.  At first, I thought they might be cormorants or Surf Skoters, but the translucent flashes of orange suggested Oyster Catchers. 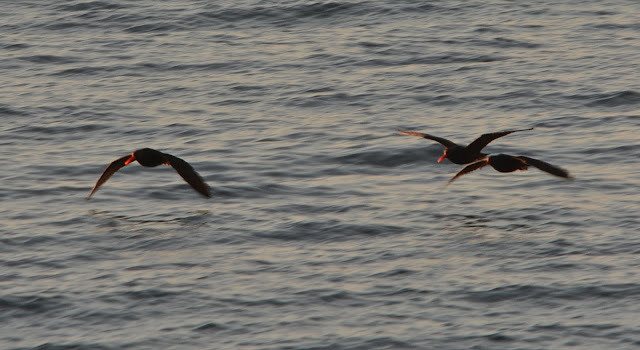 Seeing Oystercatchers is always a big deal, though my knowledge about them is scanty. This site, describing the Black Oystercatchers of Stanley Park, was a helpful one.  I learned that they spend their entire life cycle along a fairly short stretch of Stanley Park's shoreline.  That amazed me, as our sightings have been so rare that I still feel it has been a rare bit of good luck when one appears.  The video below is also excellent.  It is over six minutes long, but is beautifully filmed and narrated, giving a personal account by a knowledgeable birder.  Finally, if you are curious about the sound of oystercatchers, scroll down a bit at this link.
Though we kept a respectful distance (I used my 500 mm lens), all the birds left after we arrived except for one.  That bird appeared at first to.. 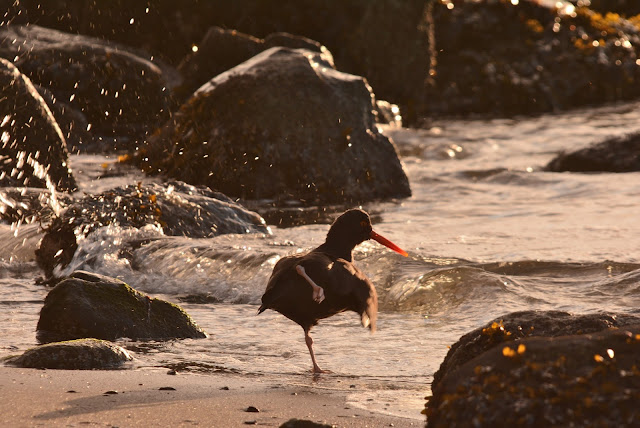 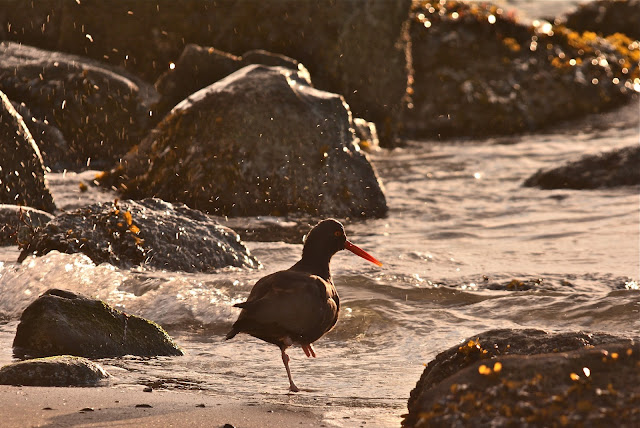 but then it walked away on two legs.. 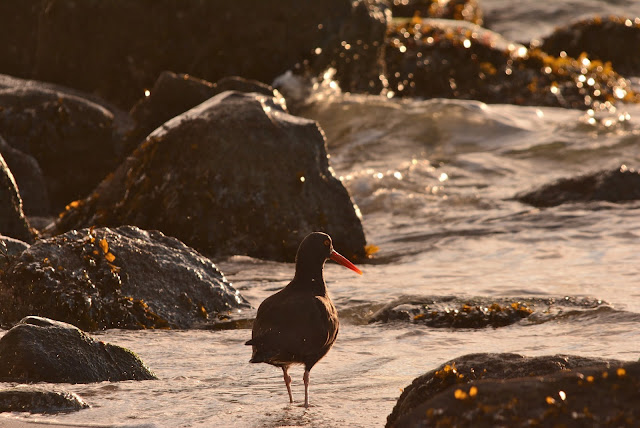 so I think it was fine. 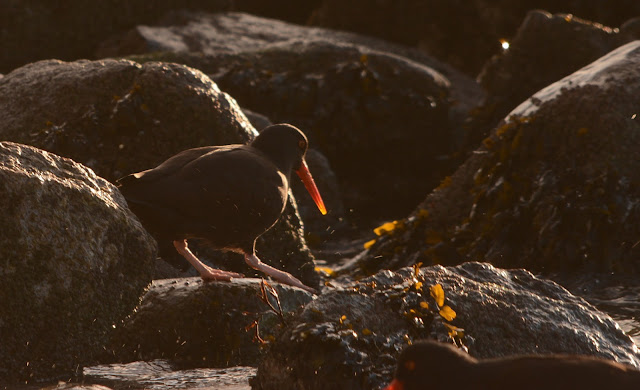 Bill left for a few minutes and when Black Jack saw him returning, she flew over the logs to reach him at a speed that makes it hard to believe she is 11 yrs 3 mos old. (I've been telling people she's 10 for a long time, but I guess I was dreaming.) 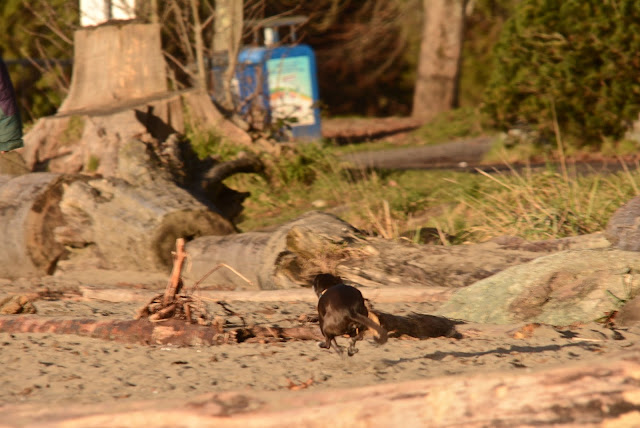 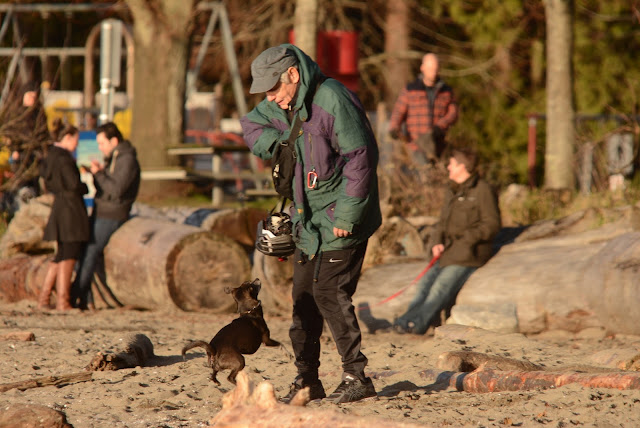 She ran just as quickly back to me.. 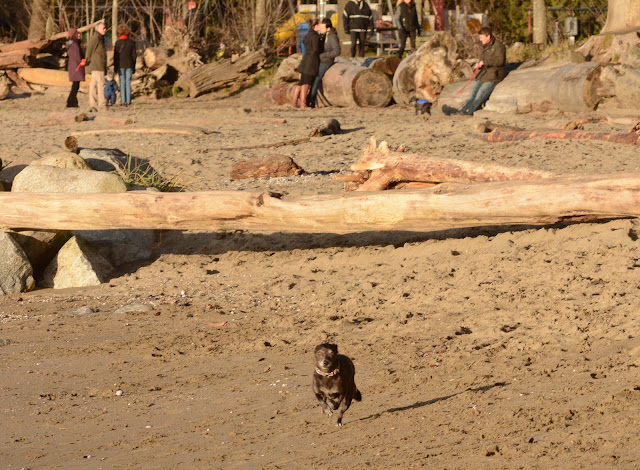 and continued to fly between us until we were together.  She has no interest in birds but Bill picked her up to make sure we weren't stressing the Oystercatchers. 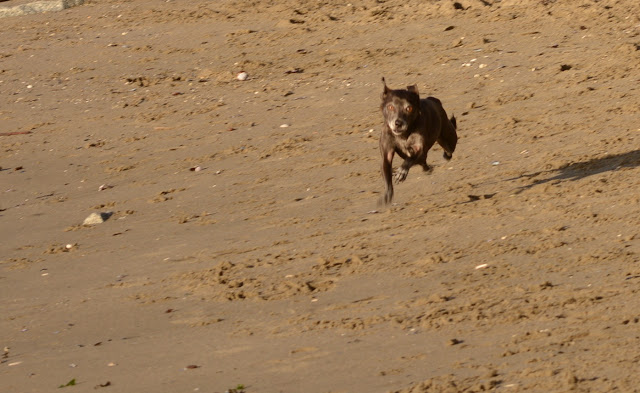 This shot was a mistake (focus on the water instead of the bird) but I liked it.

The loner that stayed behind when the others left seemed to have no fear of us.  Below, s/he walks toward us. 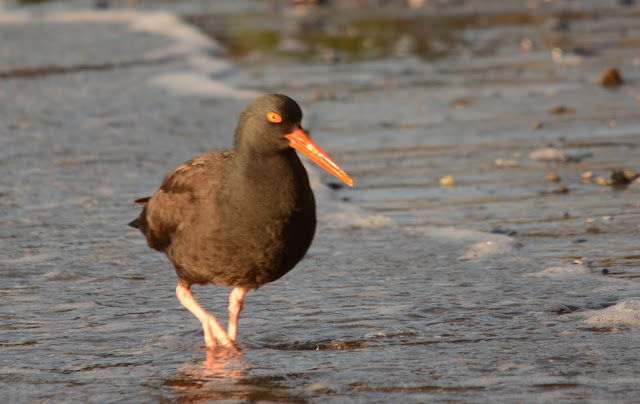 S/he appeared to be skilled at finding food.  I learned from the site linked above that Oystercatchers have two hunting styles: they are either stabbers or hammerers.  The stabbing method is a bit more refined as they wait until the mussel or clam relaxes a bit and opens up.  Then they stab their bill into the opening to get at their prey.  Hammerers just pound the shell until it breaks apart. 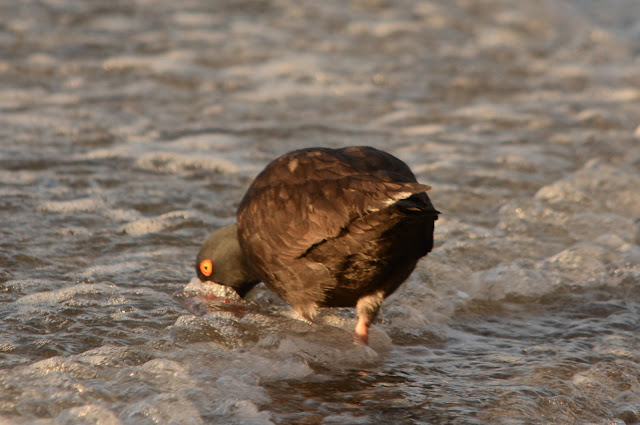 The Stanley Park Oystercatchers are stabbers.  It takes them about three years to perfect this system, and so they stay with their parents for longer than many birds. 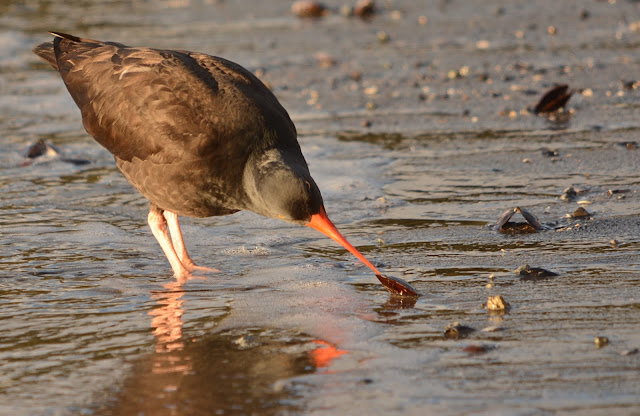 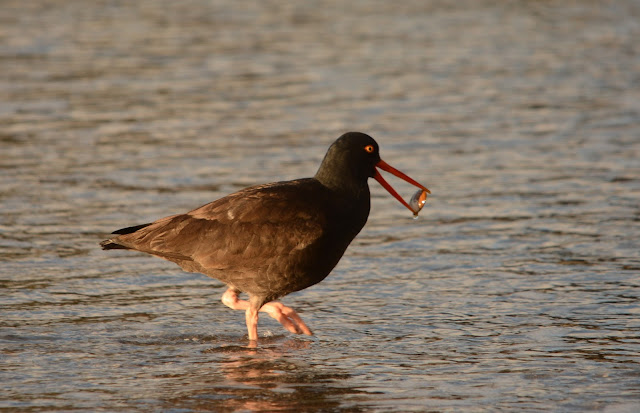 We wondered if washing their catch was part of the preparation process. 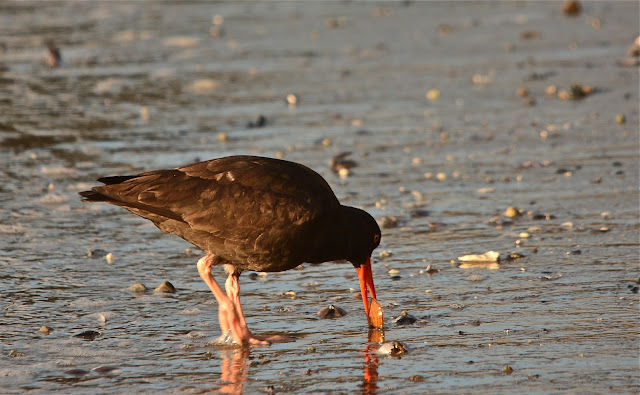 I wonder why this particular bird was so at ease around us. 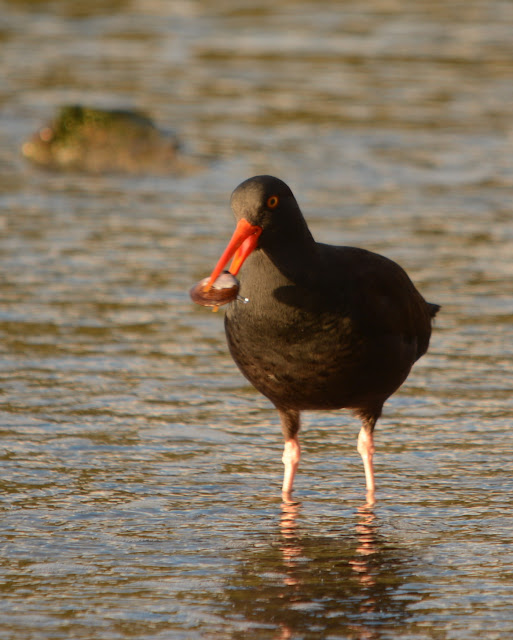 There is something rather comical.. 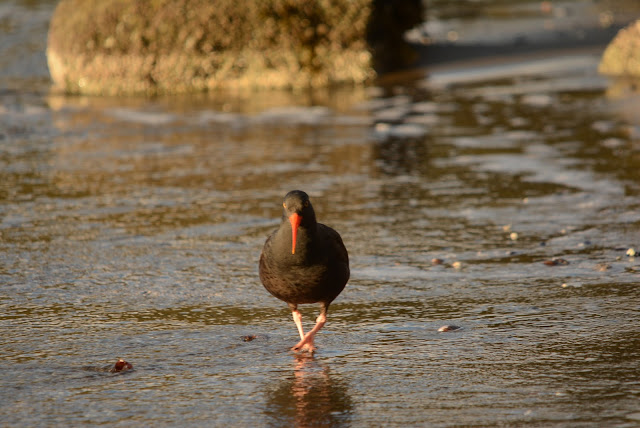 about their walking style. 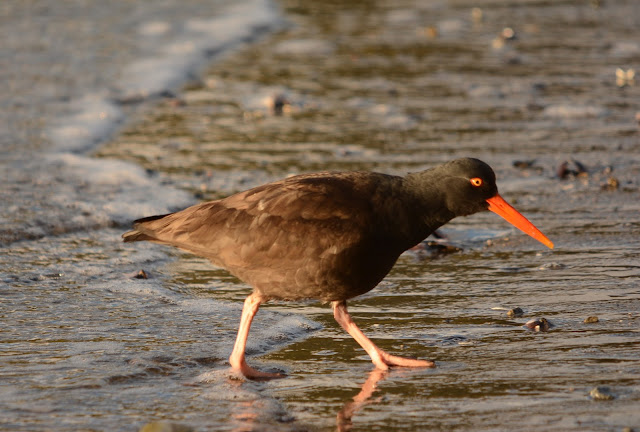 One thing for sure, the hunting was good for our friend. 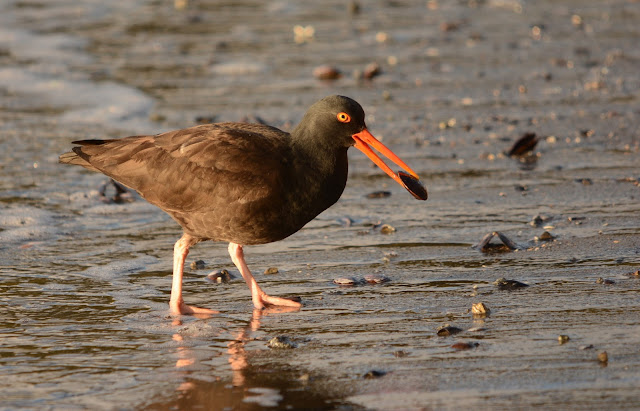 As we walked up this favourite path to our parked bikes, I asked Bill to pose for.. 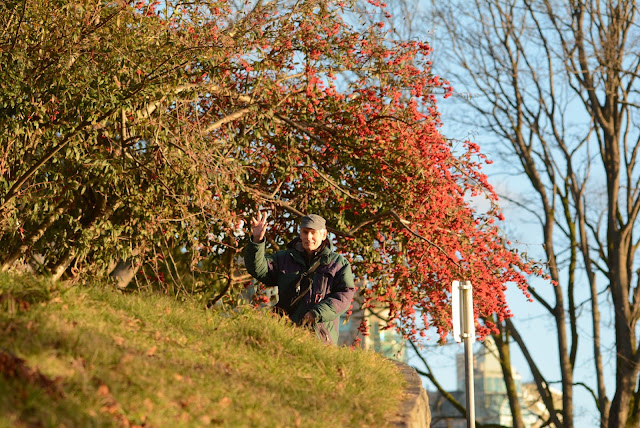 a photo in front of the red berries that have brightened the area for several.. 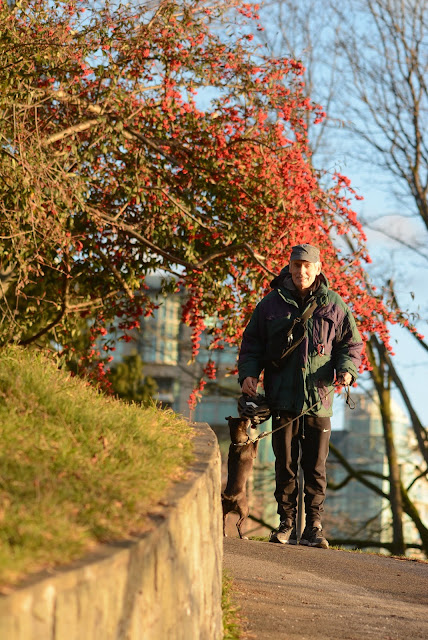 months.  I love his mischievous look here as he plans a little salute. 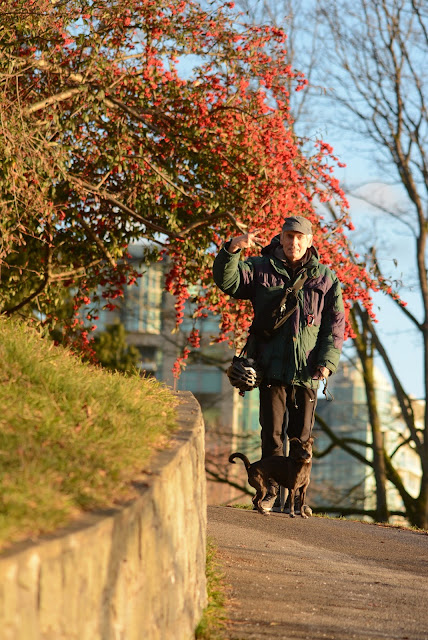 I am posting two short videos that I took.  Video is not my strength and I had the 500 mm lens on with no tripod, so they're a bit shaky.  In this first one (26 seconds), the Oystercatcher nimbly balances on one leg, scratches a bit, and then hops over the rocks to another feeding spot.
This second one is 43 seconds.  It is also wobbly but gives you a fairly good idea of their walking style and their stabbing technique.
That's it for Oystercatchers this week.  If you've never had the chance to observe them, Stanley Park's seawall might be a great place to start.  Happy weekend, everyone.  Many thanks for stopping by!
Posted by Black Jack's Carol at 12:44 PM