Last evening's sunset began quietly. I stopped on the Lions Gate Bridge, as I have done for the past three days. The beacon on the lighthouse was just beginning to twinkle against the fading afternoon light. 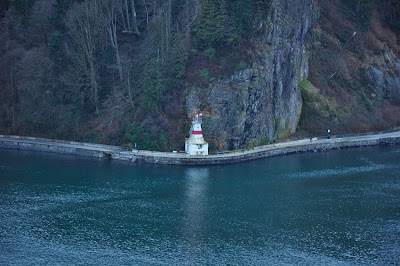 There was the faintest tinge of pink over the water. 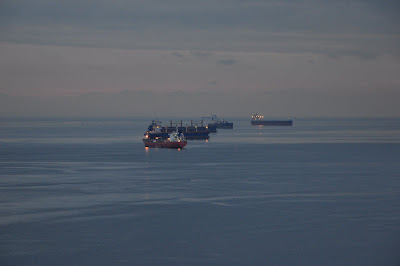 The spotlight on the bridge girders was not yet bringing out the forest-green hue that I loved in some night shots on Monday. 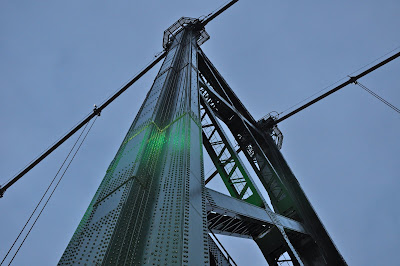 The view to my right over West Vancouver gave no hint of the transformation to appear as I turned back, seconds later. 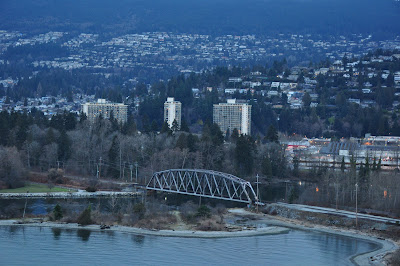 Orangey-pink layers and a white-gold sliver of light lined the clouds just behind the mountains. 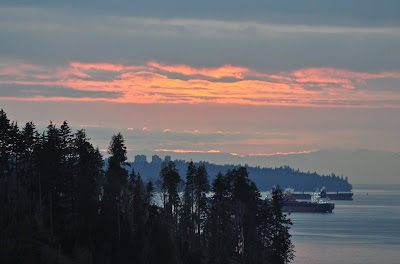 I continued on my way, thinking it had been a very nice sunset. Instead of biking along the causeway, I took the road through Stanley Park that passes Prospect Point. Through the trees, pinks and oranges were now on fire. A quick shot, and I hurried on, hoping to catch an unobstructed view past the trees. 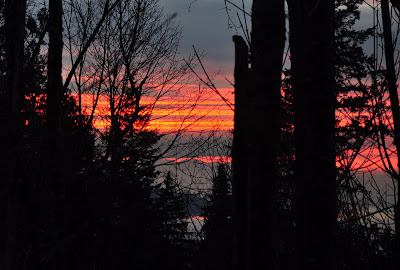 I haven't taken that backroad for a while, and loved the smooth, downhill ride along the recently paved road. It seemed only seconds later that I arrived at a clearing, but it was as though the sky were playing a game. Only the tiniest hint of pink remained. Now you see me, now you don't. I tried to find a poem that expressed the swiftness of change. Maybe this one by Emily Dickinson?

Out of sight? What of that?
See the Bird—reach it!
Curve by Curve—Sweep by Sweep—
Round the Steep Air—
Danger! What is that to Her?
Better 'tis to fail—there—
Than debate—here— 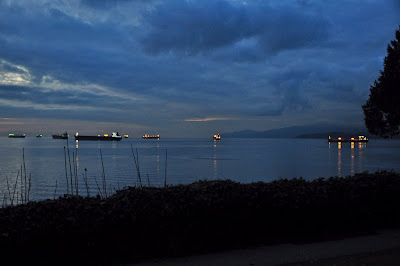 On Monday, while I was taking the picture below at the Fell Street lookout, a crow grabbed my lunch. I had set it down on a picnic table in a tightly closed container while I took the photo. I heard the commotion as it dragged the container to the ground. I turned around just in time to see the crow pecking at the cover. I really didn't want to lose the lunch - it was a bean salad that I had just bought at a little restaurant on Harbourside Drive, and it looked delicious. The crow flew just a few feet away as I approached, not brave enough to fight me for the lunch, but staring quite confidently. Perhaps it was one of the crows that had watched me watch ospreys for the past couple of years. I grabbed the lunch, but gave the crow a few of Black Jack's treats that were in my pocket. I think we both thought that was a fair deal. I'm sorry I didn't take a picture of the crow. Lawrence and Olivia's nest is on the left side of the photo - it is the only pylon without a white point. There are no remnants of the nest on the pylon. I wonder if they will return. 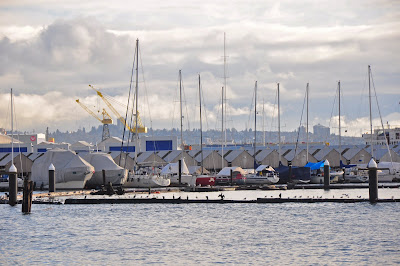 Cycling home after dark, the girder on the Lions Gate Bridge seemed a more beautiful shade of green than I had ever noticed before. 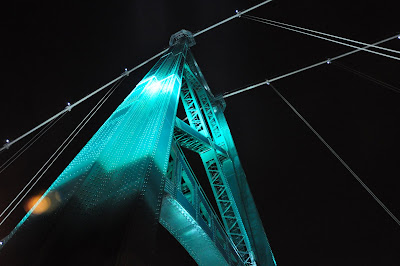 From the small look-out area, there is quite a good view of the rest of the bridge. The walking and bike path is well protected from traffic. 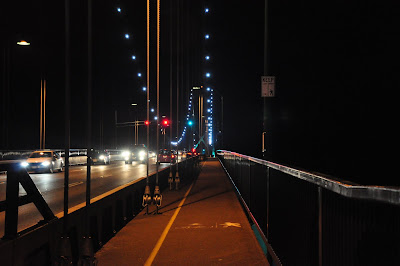 The bike waited in the look-out area. 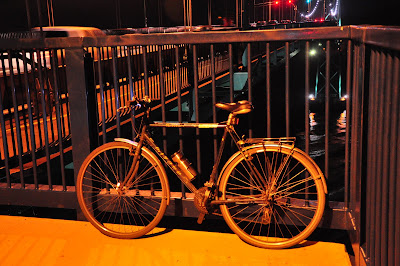 Fascinated with the girders, I looked to the cages above and thought of the workmen who know the bridge intimately. It is something different, I guess, for each traveler. 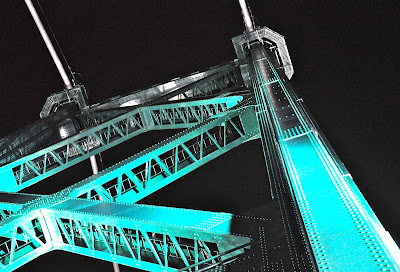 Continuing on, I spent a few minutes with the lions, 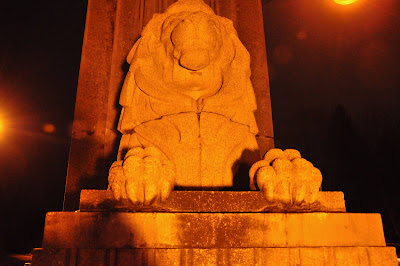 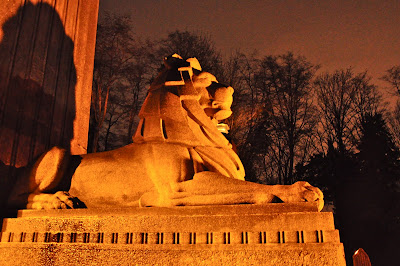 and read the inscription at the entrance to the bridge. 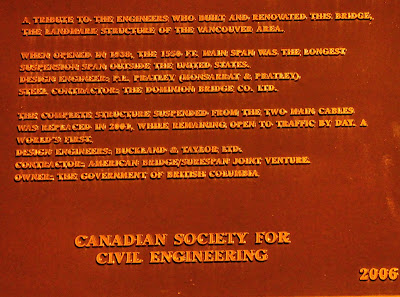 On Tuesday, as I left school for home, the almost-full moon appeared against a faded pink sky over the buildings on Harbourside Drive in North Vancouver. 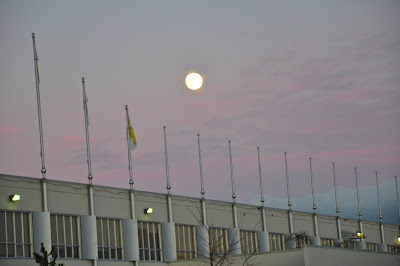 On the bridge, there was enough light to catch the blue of the sky and.. 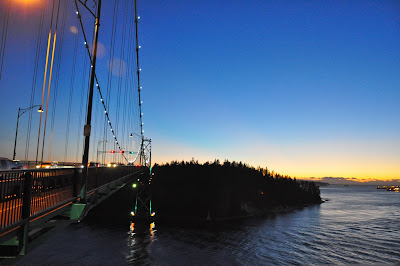 the deep purple-navy of the water. 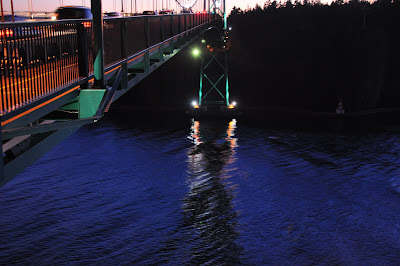 The camera saw the same view, from the same spot, over three days, (mixed order, from Wednesday, to Monday, to Tuesday) at times that varied by perhaps only a half hour, quite differently. 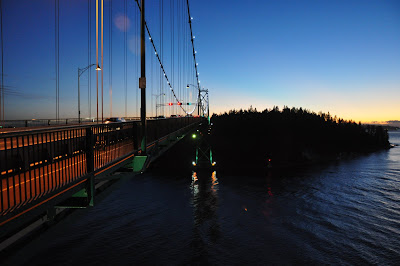 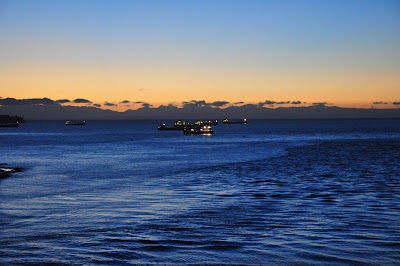 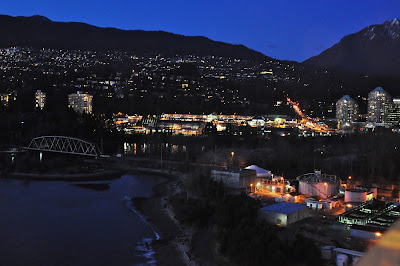 Home again, bike resting safely in the bike room, Black Jack and I walked in David Lam Park. It was impossible to resist taking yet another full-moon shot. 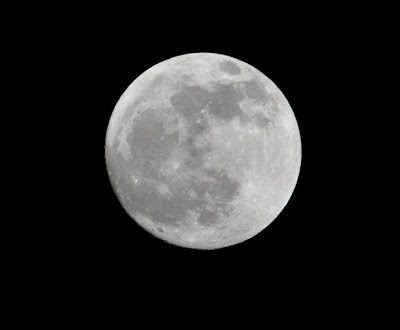 And, an almost forgotten moment from Sunday. A "Pea Jacket" in a plant store caught my eye some time ago, and something made me go back to see it on Sunday (maybe the fact that I was a bit embarrassed in my bike jacket at the Orpheum on Saturday:) Black Jack and I walked to Art Knapp Urban Garden where she was treated to a delicious biscuit and the saleslady warmed my heart by giving me this coat for half price, even though I was preparing to hand out the full amount. When I expressed surprise, she said, "Let's face it. It's about time these winter coats went on sale." I love the coat and the shop and will buy some plants there in the Spring. 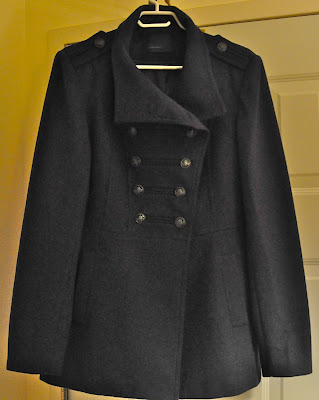 Wet snow appears in the light of the street lamp outside my window, as I prepare to leave for school. To bike or not to bike. That is the question. Until the next time. Thanks for reading.
Posted by Black Jack's Carol at 6:45 AM