Lots of photos this weekend - so many that I've divided them into three posts, this first to update Andy and Robin's story and to add some thoughts about the weekend's evening entertainment.
It has been just about two years since Robin came into Andy's life, after the loss of his previous Corgi, Myoko, broke his heart. As you can see, she has become a very enthusiastic and skilled soccer player. 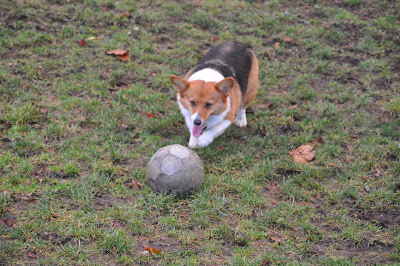 I met them on Friday afternoon in the park behind my school in North Vancouver. After a professional development day focused on first aid training, my brain was feeling quite fuzzy, and I had gone out to shoot a few photos in the late afternoon light, before heading home. They happened by, and with camera all set to go (I thought), it seemed the perfect opportunity to do a little photo shoot. Unfortunately, some autofocus problems that my brain only managed to solve after they left, meant the theme of fuzzy was to continue a little longer. However, it was heartening to see how much fun Robin is having with Andy. She is a very vocal dog when soccer fever hits, and Andy mentioned something about yellow cards (warning) and red cards (time to go home). 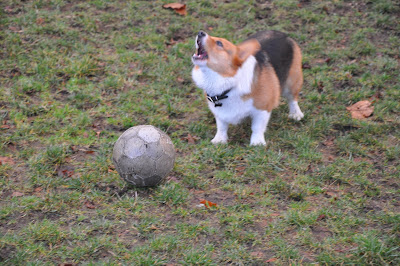 However, no cards were handed out, and it was obvious that they are a team that works together in harmony. I hope to bump into them again soon, bringing you better pictures to go along with a story that is never far from my heart. 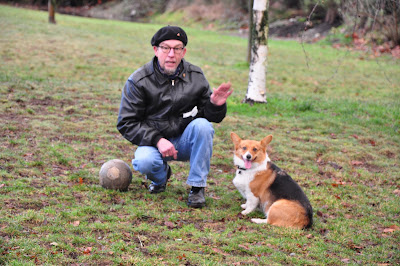 Bill's culinary masterpiece and empathetic ear made Friday evening good. His salad included spinach, kiwis, avocado, raspberries, pear slices, walnuts, and a rennet-free goat cheese. With plain yogurt as a dressing, it was as absolutely delicious as it was beautiful. 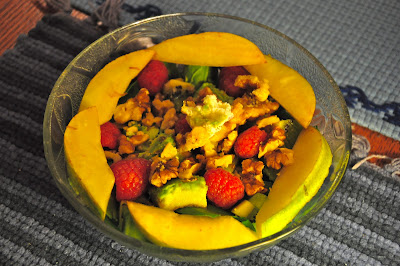 Some red wine and very tasty black bean soup (organic brand made by Happy Planet) with broccoli pieces added, rounded out the meal. 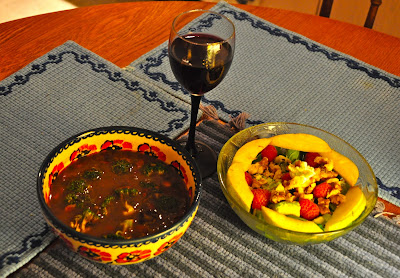 On Saturday evening, after a wonderful morning at Iona Island (separate post), we attended the first ever Vancouver South African Film Festival at Empire Granville 7 Cinemas. There was a little bit of confusion finding the theatre (even after arriving, we couldn't see a 7 anywhere on the sign), and that, along with our decision to buy tickets at the door, meant we almost didn't get to see a very fine film. We stood in a "rush" line for quite some time, while every person with tickets was admitted. Finally, we were among the last to be admitted to an absolutely packed theatre. 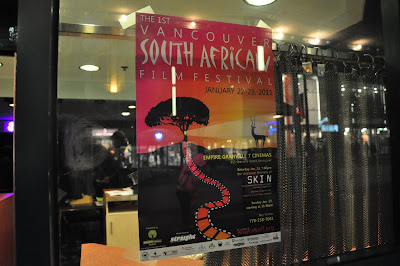 While standing in line, I amused myself taking pictures of the surroundings. The Commodore across the street looked quite appealing in the city lights, although the booming bass coming through its walls had not only the air but (I swear) the sidewalk vibrating. 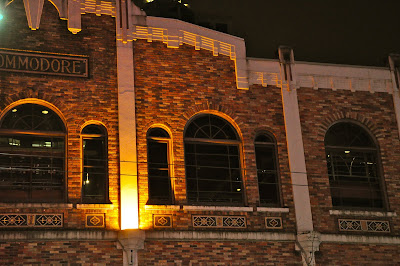 There was a small tree just outside the theatre with what appeared in the reflected light to be bright red berries. When I looked closer, I saw that the "berries" were actually shrivelled leaves. 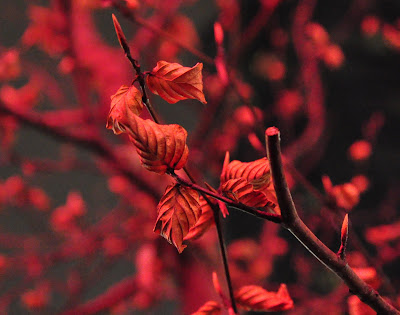 This sign, over the theatre, is about as risque as my blog gets:) I found it quite beautiful. 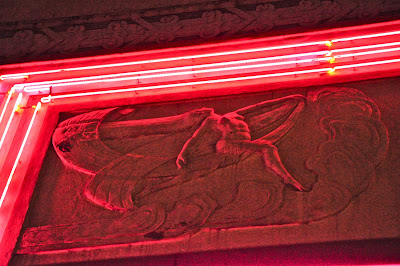 All proceeds from The African Film Festival are going to an organization called Education Without Borders, not to be confused with the much larger organization, Teachers Without Borders. The movie, "Skin" tells the story of Sandra Laing, a girl with dark skin, born to white Africaner parents, during the Apartheid. It is a powerful movie, and one that will stay with me for a long time. Human beings throughout history have inflicted terrible suffering on one other, while others have shown inner strength that is close to unfathomable. Both phenomena are highlighted in this powerful movie. Though I was well acquainted with stories of the Apartheid, Sandra's story (she is now in her mid fifties) has brought home the reality of the time and of the aftermath, like no other. See the movie, if you possibly can.
On Sunday, Bill rented a movie called Seven Beauties. It is a classic, one of the all time movie greats, and certainly ahead of its time, but somehow, I had missed it. Made in 1975, directed by Lina Wertmüller and starring Giancarlo Giannini in the main role, it was another movie to force me to ponder mankind's potential for cruelty. Recently, I proclaimed that I no longer wish to view any entertainment that causes me to turn away until Bill gives the "all clear" reassurance. This weekend, I watched two such movies. Proclamations are frequently a poor idea, although the thoughts that precipitate them often seem right at the time. If you haven't seen Seven Beauties, and if you can bear to take yet another look at the atrocities of the holocaust, as expressed with artistry and humour (yes, I have to say, humour), then choose a day when you are feeling strong and spend some time with this movie.
Iona Island and English Bay posts to follow soon. It is pouring outside, but not too cold, and with a little luck, perhaps the forecast for the week will be as wrong as it was for the weekend. Thanks, as always, for taking time to read my blog.
Posted by Black Jack's Carol at 7:50 AM