*Blogger has changed some things, so this post is a bit of an experiment.  Mostly, it looks positive since multiple pictures can be uploaded in one easy step.  However, I suspect you will no longer be able to click on pictures to enlarge them.  I've chosen "extra large" for the size.  That could be a mistake, and if so, my apologies in advance.
On Wednesday, April 6th, I stopped on the Lions Gate for a quick shot of the lions' latest wardrobe change. 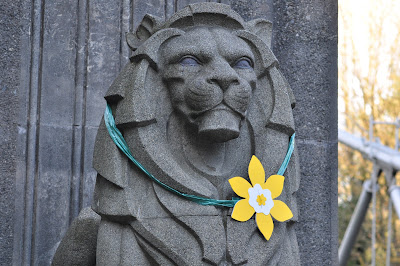 The daffodils were glorious, and I took one shot before checking out the Stanley Park heronry. 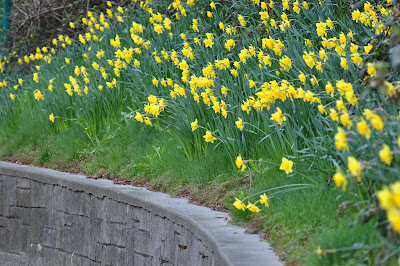 When I arrived, it was clear the herons were in a state of panic. 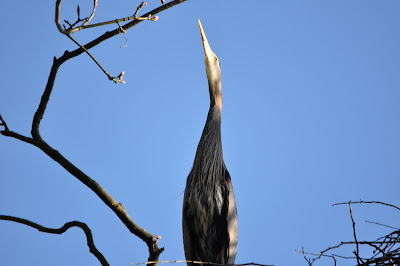 It didn't take long to see the problem. 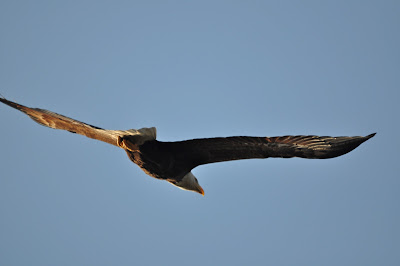 It was sad to see the herons so upset, 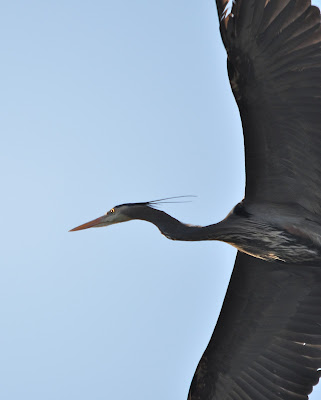 but I don't know if they have ever appeared so strikingly beautiful. 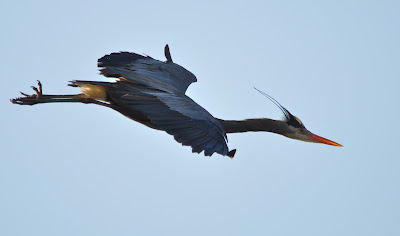 There was only one eagle, and so many herons, but they seemed powerless.  Most of them flew about in a panic, and the ones who stayed in their nests cried piteously.  I couldn't understand why they didn't band together and attack the eagle.  Surely, those long beaks would be useful as weapons.  But, no, they cried and squawked, but the eagle was not threatened.  It finally left, and here, Stella returns to her nest to check on its condition.  I'm assuming the eagle ate eggs.  Several broken shells lay on the ground. 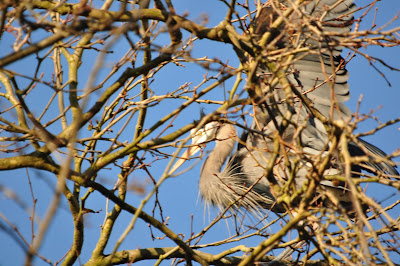 Stanley also returned, but only for a moment.  He ignored Stella, and would not settle in the nest.  Although I checked for several days afterwards, I did not see him again until yesterday (Friday, the 15th). 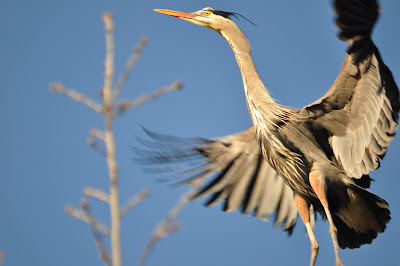 On Thursday, April 7th, I walked across the street from school at lunchtime to get a Thomas Haas latte.  An unmistakeable sound caught my attention, and I looked up to catch my first osprey sighting this season.  I rarely go outside without the camera, and managed a quick, lucky shot.  Some of you will remember that there are two nests near the school.  I've named the pair in the closer one Lawrence and Olivia, and the pair in the nest over the shipyard, Jewel and Jonny.  I couldn't identify this one, but suspect it may have been Olivia or Jewel, since the necklace marking suggests a female.  She didn't settle in either nest, but flew very high in the sky. 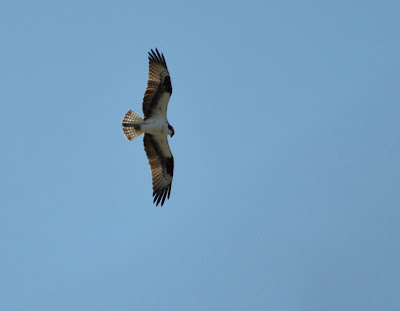 I lost sight of her, but snapped a picture of this Merganser on the river.  It seemed to be in some distress and I wondered if there was something wrong with its wing. 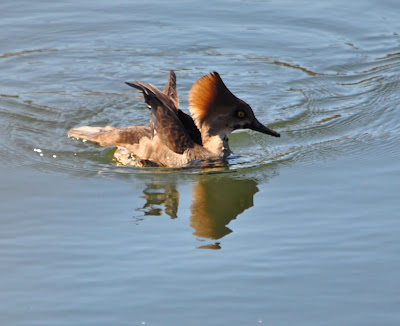 It stood up and although something still seemed a bit odd, it was at least able to flap and to swim. 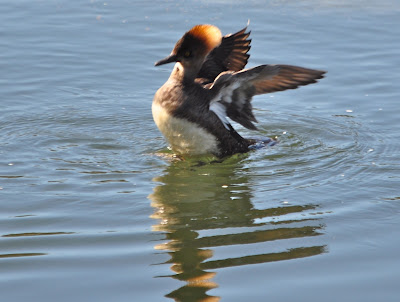 The osprey came into view once more, with an upset seagull close behind.  I wondered if the seagull had been hoping to use the osprey's nest.  Ospreys eat mostly fish, and I haven't ever seen them stealing eggs or chicks (as eagles do), so it is a bit of a mystery that they are so disliked by seagulls. 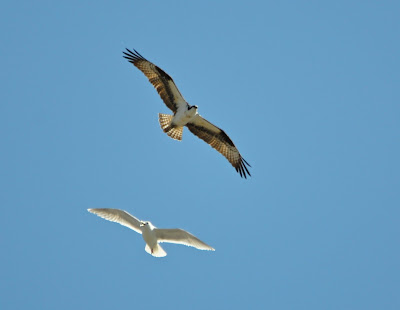 Later, on the way home from school, I stopped just after the bridge at the turnoff to Prospect Point.  This skunk cabbage was looking absolutely stunning in the sunlight. 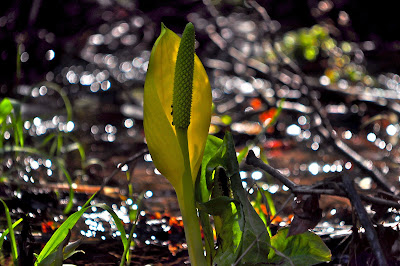 Continuing on to the heronry, things were again in a state of chaos. 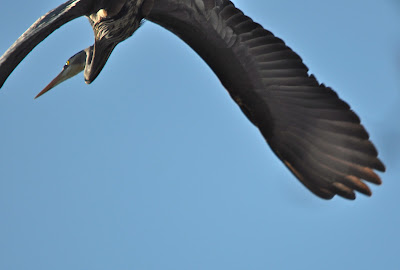 And, once more, I admired the herons' beauty. 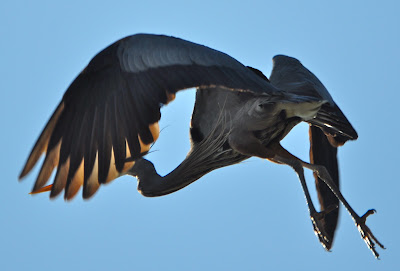 Again, Stella returned to check her nest.  There was no sign of Stanley. 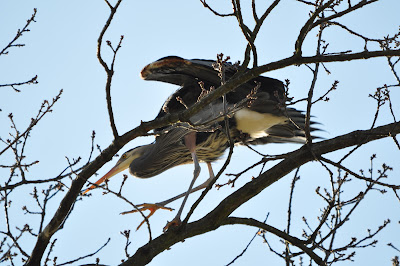 The eagle flew from nest to nest, 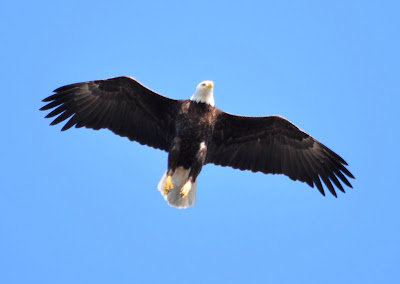 not the least bit disturbed by the herons. 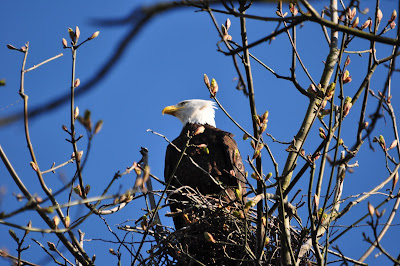 A horse and carriage came by, and I was happy for the distraction.  It was quite painful to listen to the herons' cries, and I decided I had had enough wildlife viewing for one day. 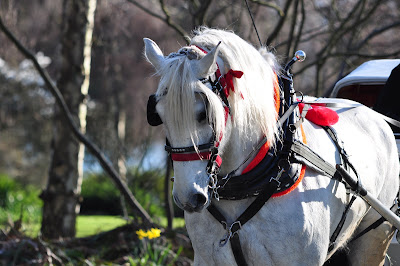 Friday, April 8th, was the last day before the holiday.  It was really, really busy with reports and a move to my school's new music room that has just been completed in a construction phase 2 project.  I was eager to head home to one of Bill's delicious meals, so the stop by the heronry was very brief.  Almost all of the nests were deserted.  I took this one shot of a crow gathering nesting material, and continued home. 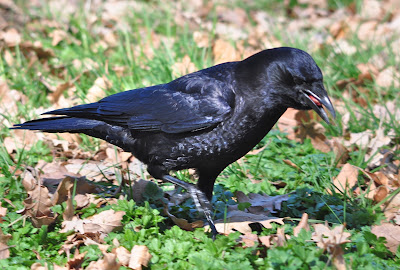 I'm slowly catching up on posts.  It is now Saturday morning, April 16th, and I'm looking forward to an outing with Bill and to an Ibsen play (Rosmersholm) this evening at Jericho Arts Centre.  The Canucks won their game (with a lot of hard work) last night, and appear to be headed for a good playoff run.  I'm glad of that, as they have had quite a few disappointments over the years.  It is rather grey outside, but somehow, I feel it will be a good day.  More osprey and heron updates to follow soon.  Happy weekend, everyone.
Posted by Black Jack's Carol at 7:18 AM