I returned yesterday from a wonderful trip with Bill that covered the more or less circular route shown in this map. It began in Vancouver and took us to Pemberton, Lillooet, Cache Creek, Lytton, and Harrison Hot Springs. I came across some first-ever photograph opportunities, but I'd like to catch up with the first eleven days of April rather than jump to an admittedly "fresh in my mind" adventure, so expect a number of posts in fairly quick succession.
Friday, the 1st day of April, was April Fool's Day. In honour of that event, I found a picture at this Wikepedia site. 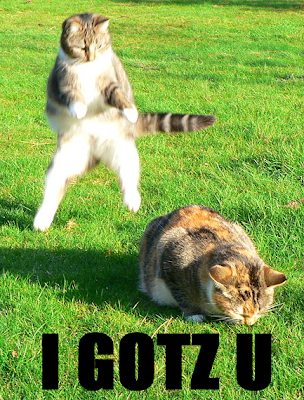 Our last assembly of the semester happened to be scheduled for the first, but with many of our students from countries where April Fool's isn't celebrated, it wasn't really on my mind. There was just one week of school left, that one mostly reserved for final exams. Then would come the two-week break. My principal said with a very straight face to all of the students gathered in the gym that he had some news. "We are trying something new this semester," he said. "For those of you who are not currently passing, we will have two extra weeks of school. You will write your final exams the day before our next semester starts. This will give you a chance to achieve a passing grade, so we know you will be very grateful for that opportunity." I thought he did an excellent job of looking serious.. in fact, I didn't immediately catch on, but our students were quick. "April Fool's," called out one of them.
After the assembly, I rode home past Prospect Point in Stanley Park, and came across these two eagles high in a tree. I used the Coolpix to take a shot in the rain. They appeared to be having a little conference, and as events turned out, that wouldn't be a positive thing for the herons. 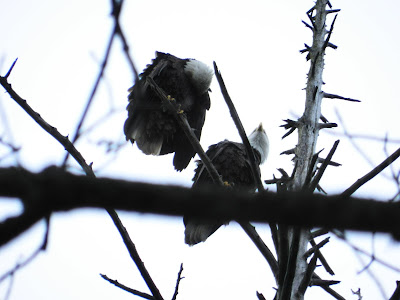 The forest was looking lovely in misty rain. 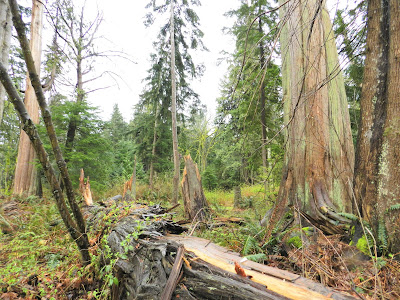 When I arrived at the heronry, Stanley and Stella were busy working on their nest. At least, Stella (on the left) seemed to be trying to instruct Stanley in the fine art of being a proper mate. 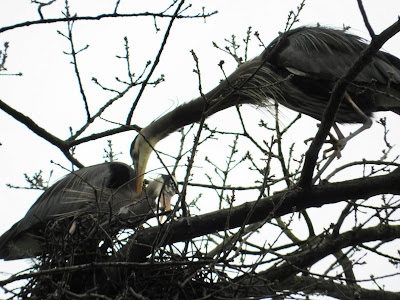 I thought he seemed a bit confused. He was slow to leave Stella, unlike other males who were flying in and out every few minutes with nesting material. 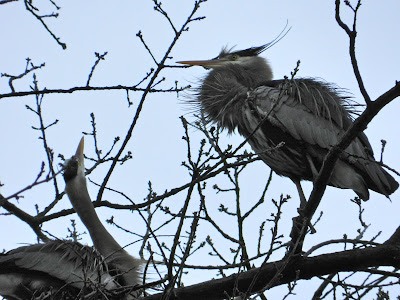 On Saturday, April 2nd, I walked with Black Jack in David Lam Park, and took cormorant pictures. It seems to me there are many possible perches where they could dry their wings, but they appear to prefer that Brush with Illumination sculpture the most. 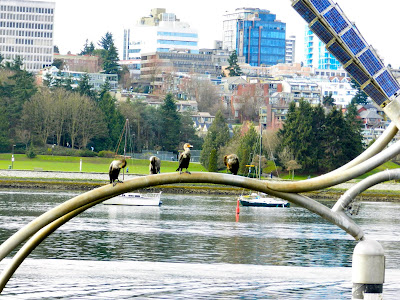 It was low tide, and Black Jack wanted to climb down to the shore's edge to do some exploring. 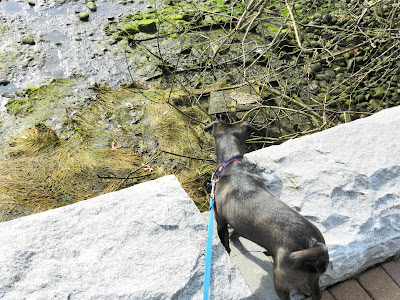 Time was a bit too short for that, as Bill and I were meeting our friends Kitty and Jock. Kitty's mother and father have both been seriously ill for the past year, and had moved from their home in Saskatoon to live with Kitty and Jock. Unfortunately, that arrangement suddenly came to an end, with both parents' health deteriorating to the point where hospitalization was necessary. Here, Kitty sings "Ivan Skavinsky Scavar" to her dad - a song that he often sang to her when she was young. He is gaining strength once again, and I feel Kitty's music therapy is a success. Kitty's two sisters and two brothers are also doing everything they can to help out with this new development, and it is heartening to see the family draw together in spite of work and distance challenges, even managing to find laughter in the midst of great stress. I also find it very heartening that the hospital allows animal visits once the patient is out of intensive care. Black Jack came along with us for the visit, and the following day, Lucy (Kitty and Jock's Sheltie) also visited. Kudos to Vancouver General Hospital for a great strategy to improve life for patients. 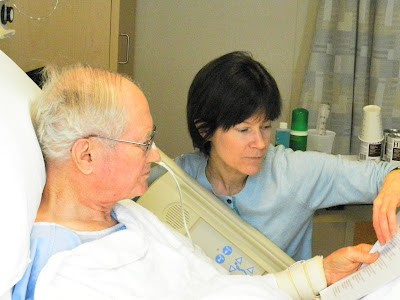 After the visit, Bill and I walked from Yaletown to The Orpheum for a concert. We had tickets to hear the violinist, Sarah Chang, play with the Vancouver Symphony Orchestra. On the way, we noted this gargoyle (at least, I think it qualifies as a gargoyle) on Drake Street, north of Pacific. I don't have the address of the building, nor have I researched the gargoyle's history. However, if you read Gillian Olson's blog at her site, Pacific Spirit Whimsy (linked at the right of my blog), you can find fascinating information about gargoyles around Vancouver. She also is a very talented artist, and I've been honoured that she chose two of my photographs as models for her paintings.

Her cards are sold at: 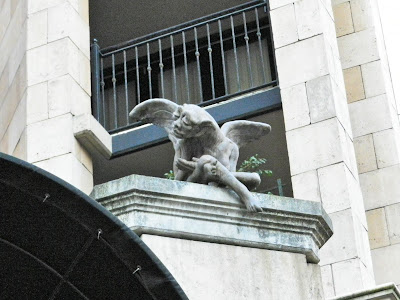 This doesn't qualify as a gargoyle, but it is on the other side of the same building, and both Bill and I agreed that it adds to the attractiveness of the architecture. 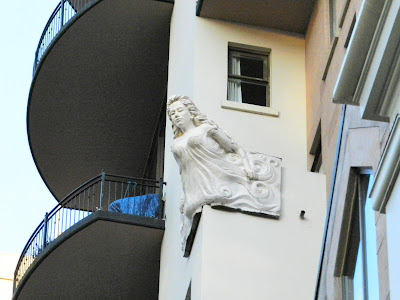 We made one other stop at Emery Barnes Park at the corner of Davie and Richards. A mallard pair had set up housekeeping in the fountain. 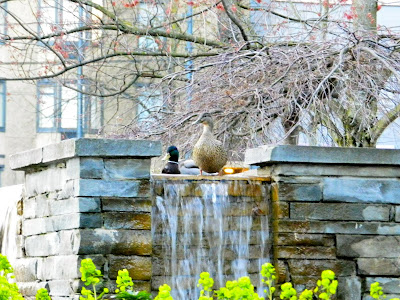 Once in the Orpheum, we were happy to see that Bill's nephew-in-law, Paul, was performing with the orchestra. I managed to catch a photo of him before the concert started. You can just make out his head against the harp. Yay Paul! Sarah Chang performed the Brahms Violin Concerto, one of my favourite works, and I don't know when I've heard a better performance of it. Paul told me at intermission that he was thrilled by her performance and by the opportunity to play the orchestral part. I also had to finally admit to myself that the beautifully performed "schmaltz" of Wagner's Prelude from Die Meistersinger and especially Strauss's Death and Transfiguration had my heart pounding with a passion that could barely be contained. There was one aspect of the concert that I probably shouldn't mention, but it was something I couldn't ignore. Sarah was wearing a beautiful gown, but one strap kept slipping down over her arm. Each time she had a little break in the music, she would try to discreetly slip it back in place. I kept thinking someone with her world fame should surely have a dressmaker who would catch any potential clothing distractions. It was amusing to read Sarah's blog and find a comment on this very topic. You will find that comment almost at the end of the linked posting on her blog. I also learned from that post that she first learned the Brahms Concerto when she was eight years old. She plays it with the depth of understanding that one has for an old friend, and small wonder. She has pretty much grown up with Brahms as one of her closest companions! 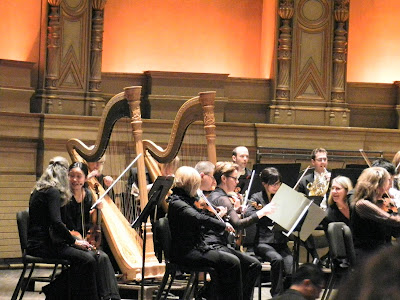 On Sunday, April 3rd, we had the rare opportunity to walk with Kitty and Jock around Lost Lagoon in Stanley Park. Daffodils were gloriously yellow, in spite of rather cold and dismal weather. 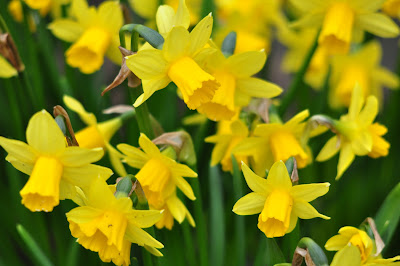 Lucy was in fine form. At 13, she is showing constant progress, after about the worst possible start to life. For her first three years, she lived in a cage in a dark shed. Kitty and Jock "rescued" her from a disreputable breeder, and have spent years helping Lucy to get over her fears. Kitty, in particular, has the kind of patience I can only marvel at. Jock tempers that "motherly" instinct with a strong dose of humour and playfulness, and together, they have saved Lucy from a life of misery that would have eventually led to euthanasia as she had already been returned to the breeders by several owners unable to deal with her damaged psyche. 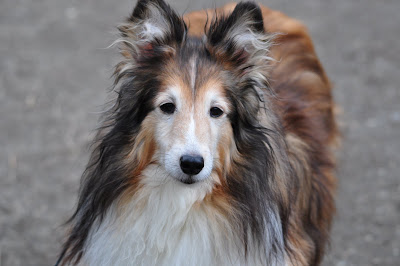 Look at her now! Lucy had a great time exploring Lost Lagoon and even accepted treats. 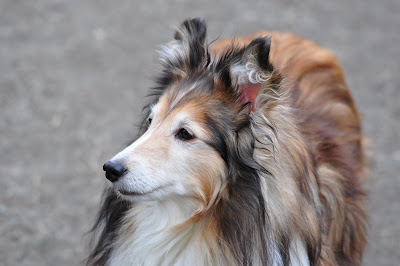 Time with Kitty and Jock has been really limited lately. When Bill and I are with them, we always laugh a lot, and Sunday was no different. 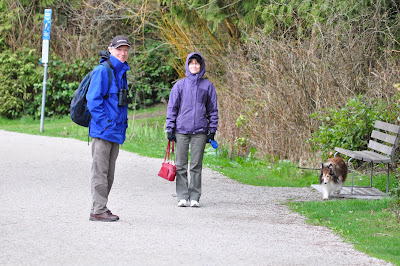 As you can see, it was Spring in Vancouver, but a hood and mitts definitely helped to make outdoor time more comfortable on that Sunday. 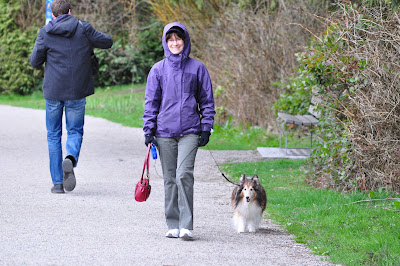 Jock didn't bring his camera on Sunday, but he was checking out, and no doubt, recording the sights in his very keen photographer's mind. 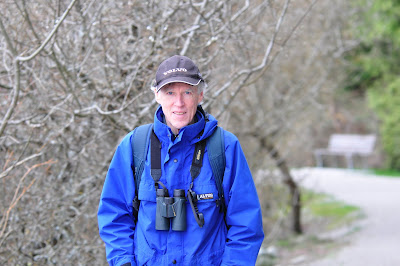 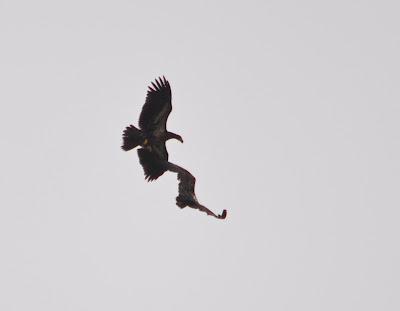 were playing in the wind. 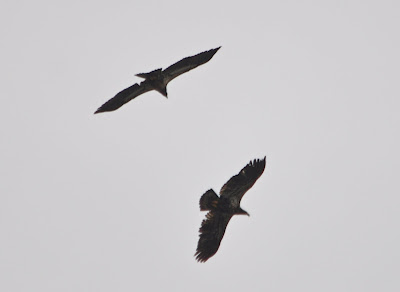 I asked for a group shot, and had to back far away to catch three of my favourite people and two of my favourite dogs. They were clowning around, but I was too far away.. 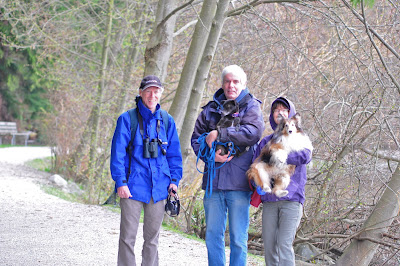 to actually catch what they were saying. I think it may have something like, "Do you really need all that lens for little old us?" Or, maybe it was, "Okay, enough with the camera, already!" 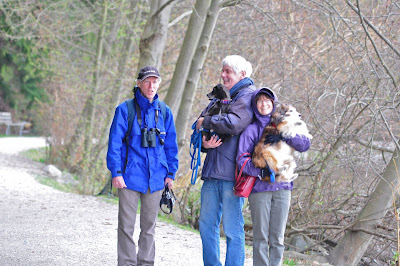 When Jock saw this, he said, "Oh look, a birdhouse with an address." 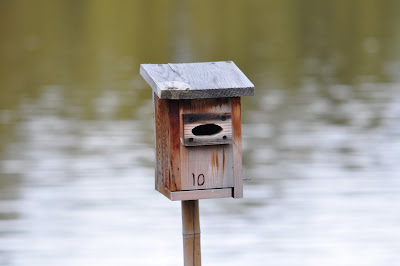 Suddenly, there was a huge commotion between a couple of geese. I expect it may have been something to do with two males competing for one irresistible damsel. By the time I took the camera out of its bag (rain had started), everything seemed to be sorted out and this fellow was hanging out by himself. Perhaps, the other two were off to set up housekeeping. 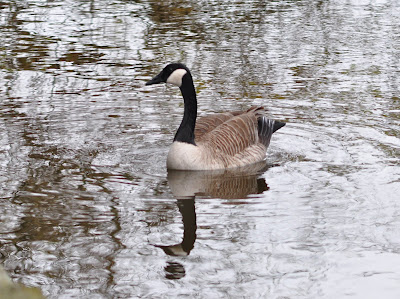 I took one more shot of Lucy. She could win a beauty pageant, don't you think? 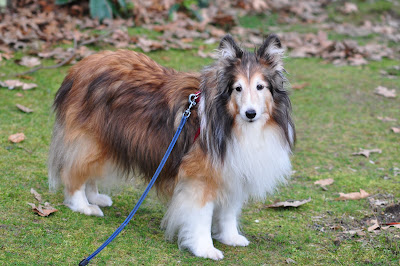 Before we returned to Bill's truck, he noted this lovely tree. The branch patterns were delicately intricate, but I could only catch the top section with my huge lens. 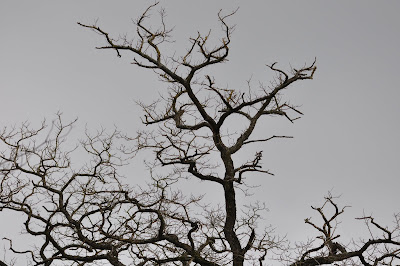 Driving past English Bay, Jock was really curious about this black ship. I got out of the truck to take a picture, and discovered that it was called "Commencement Bay" and also had "Sause Bros" on the side of the ship. I tried to look it up, but found next to no information about it. What is its purpose and/or route? Why is it black? No answers to my questions. 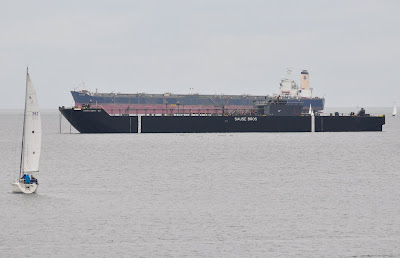 This crow watched me taking pictures of the ship. I wondered if there was any significance to its choice of the "temporary" sign. We headed off for a good lunch and more laughter with good friends. 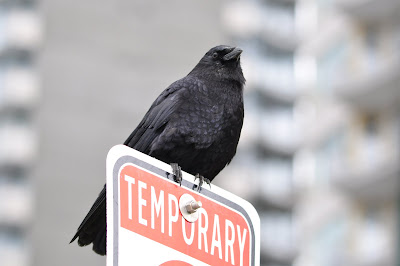 On Tuesday, April 5th, I saw Stanley and Stella together for the last time until today, April 15th. More of their story with the next catch-up post. 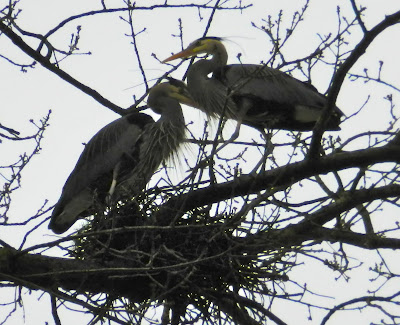 Tonight, Bill and I will watch the Canucks in their second playoff game. I wonder how many of you will be watching as well. Whatever you are doing, may the weekend be a good one!
Posted by Black Jack's Carol at 6:05 PM