A Cool Walk and some Entertainment Updates

"Ottawa Part 2" is coming soon, but in the meantime, I felt inspired after reading Penelope's blog this morning to post some pictures from a very cool (as in cold and windy) walk over the Cambie Bridge on Monday.  It seems that, as quite frequently happens, Penelope and I were sharing similar experiences, each from our separate corners of the Lower Mainland.

The walk began innocently enough with sunshine on some lovely crocuses, 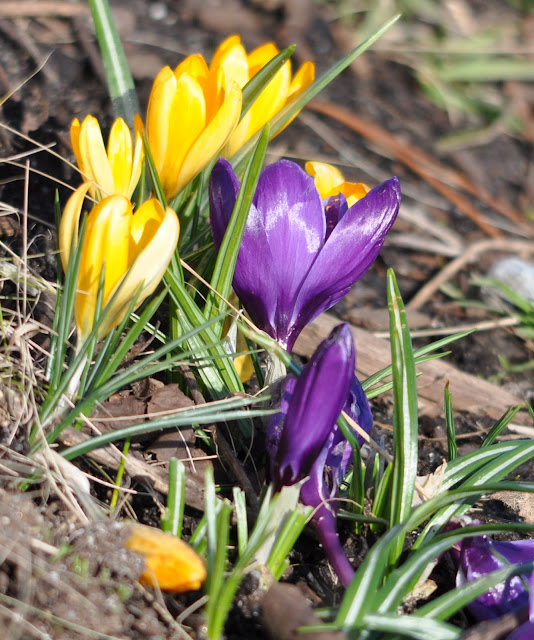 but once we were on the bridge, I could barely hold myself steady against a wind that also had Black Jack bracing herself against its power.  I've been noticing the banners about town more and more lately, and thought the icy blues in the ones advertising the Sun Run fit the brisk weather nicely.  (Here's a little bit of information about those flags if you are interested.) 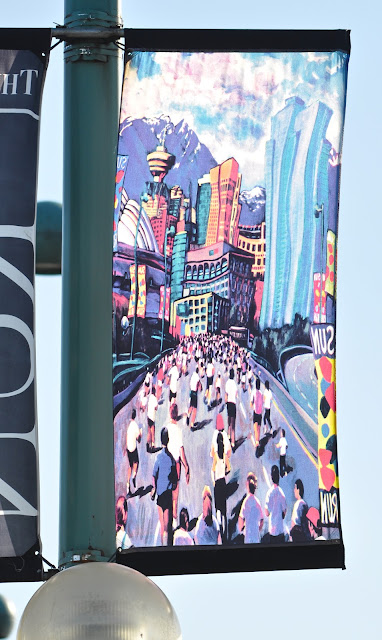 The above shot was taken from the "wrong" side, so I turned to take one with the lettering and picture reversed. 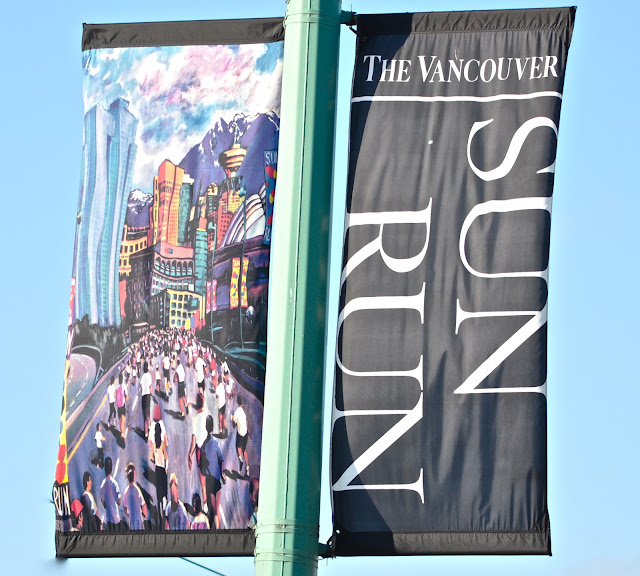 After crossing the bridge, Black Jack led me through an interesting selection of streets right back down to the seawall.  She was not eager to extend this walk any more than necessary.  I looked back and caught this seagull, almost motionless as it hovered on the wind. 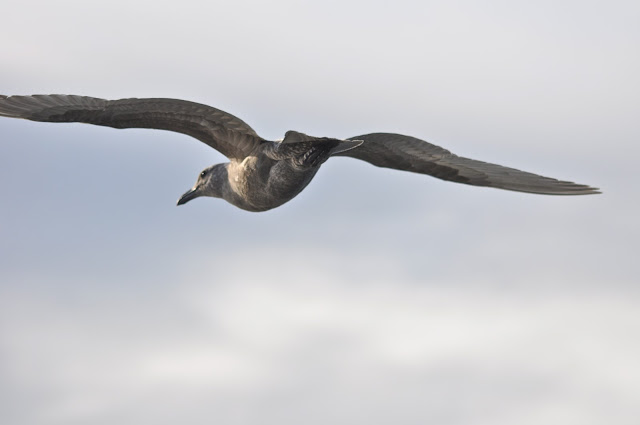 The stadium roof, with snow-covered mountains behind it, 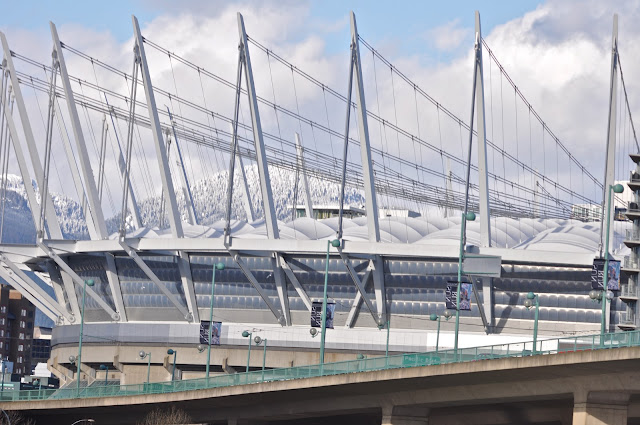 and with just a splash of colour coming from the high-rises, was magnificent. 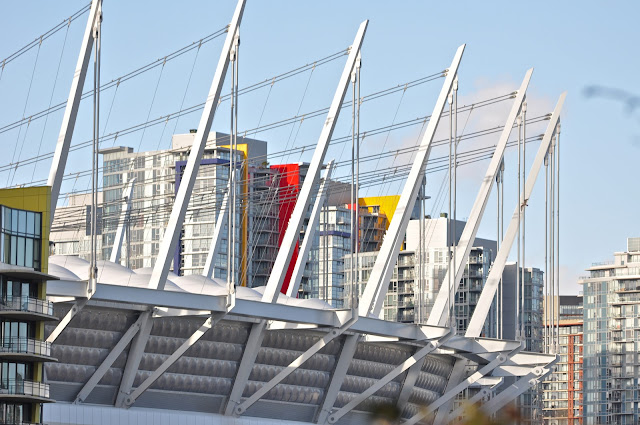 Now that we were on the other side of the bridge, the wind seemed much calmer.  I loved the flow of city and mountain landscape, 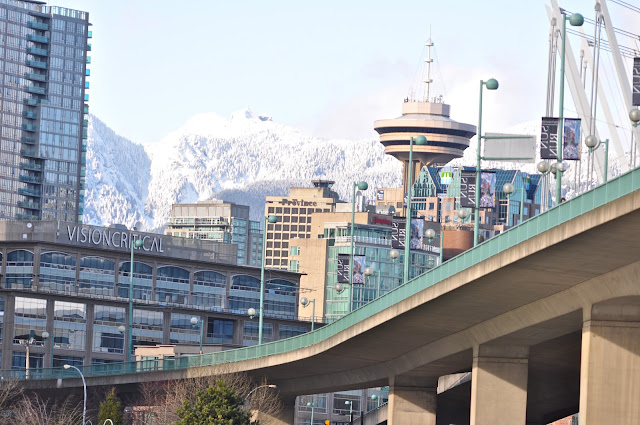 and marvelled that The Lions seem to pop up, no matter where one is around Vancouver. 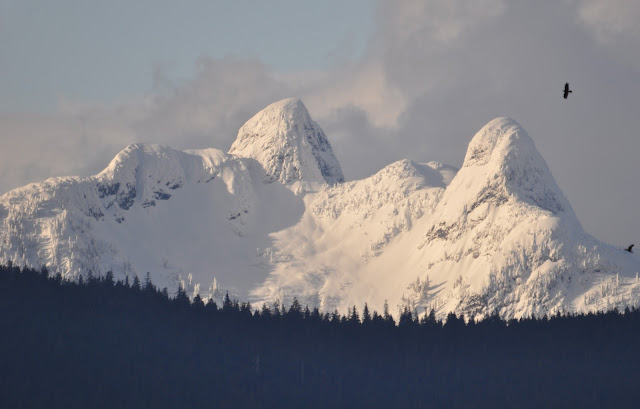 One last shot of cool, yellow flowers, and we headed home, grateful for my apartment's cozy warmth. 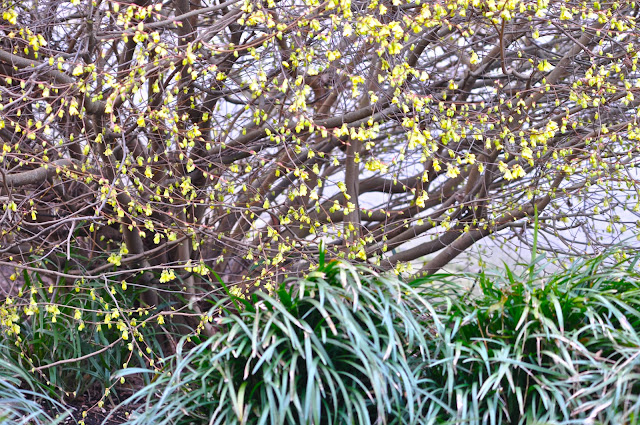 ENTERTAINMENT UPDATES
Chelsea Hotel
Some of you may remember that I fell asleep during a performance of this marvellous play.  Buying tickets to see a repeat performance is something I don't think I have ever done before, and it really touched my heart that Bill (who had stayed wide awake the first time) encouraged me by also seeing the show twice. 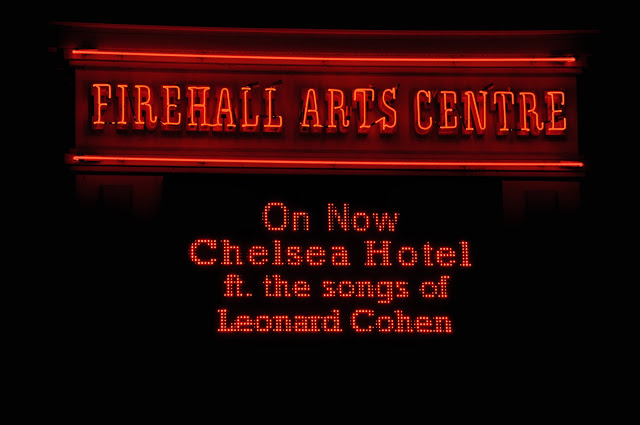 The show has ended, but it ever comes to a location near you, I feel sure that you would love it!  There is so much to appreciate in this play.  We both felt that, my naps aside, it was well worth the second viewing.  The musicians, the sets, the lyrics, the dance, the small details that were polished to perfection - what enormous work went into it, and what talent we have in this city.  After seeing it, I wanted to capture something of the evening to preserve its memory.  I was taking pictures of one side of the Firehall Arts Centre, when Bill suggested I try to shoot from the corner, to get two walls.  I think that worked well. 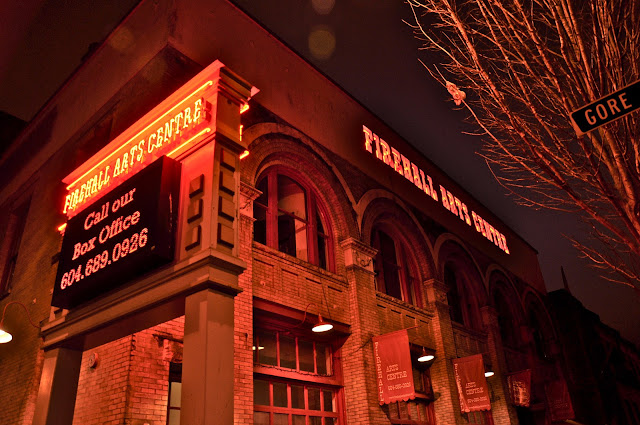 It was also Bill who noticed the wonderful, purple lighting on this building. 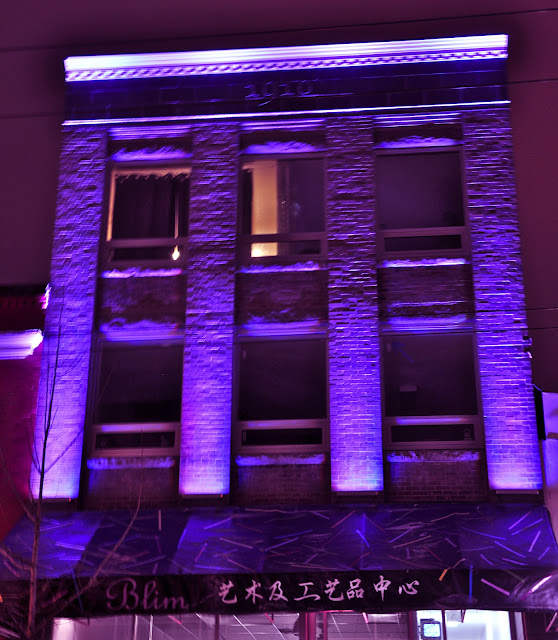 Chinatown continues to reveal touches of art that I love to see.  On that evening, I noticed the work on the upper wall of The Cultural Centre, as well as the sculptures on the roof and in the entranceway. 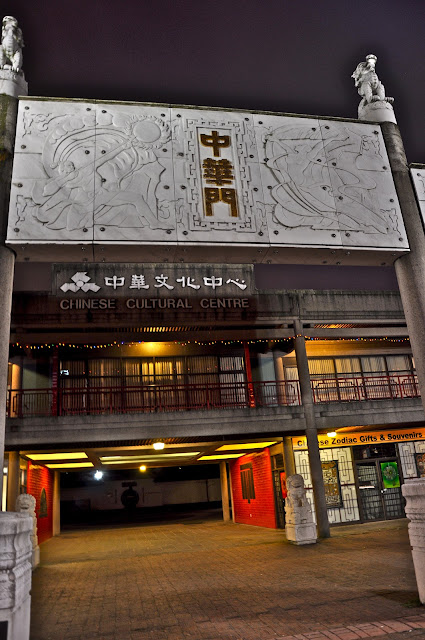 The stadium roof was a bright blue that evening, possibly in support of The Canucks, who had a game next door at the Rogers Arena. 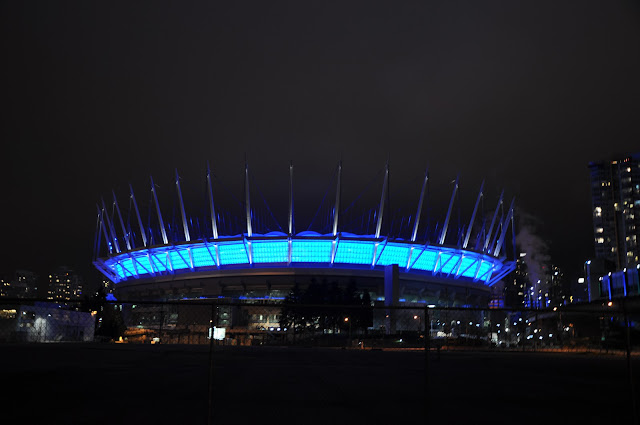 We stopped at Coopers Park to think about the fact that barrel making had continued into the 1980's.  We both found that amazing. 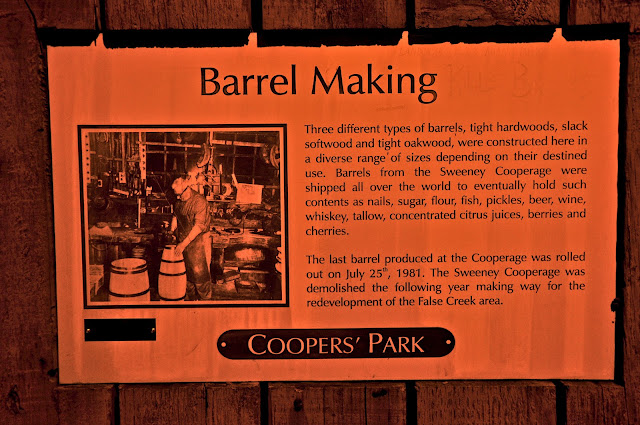 A last shot of the underside of the Cambie Bridge, because we both appreciated the lighting. 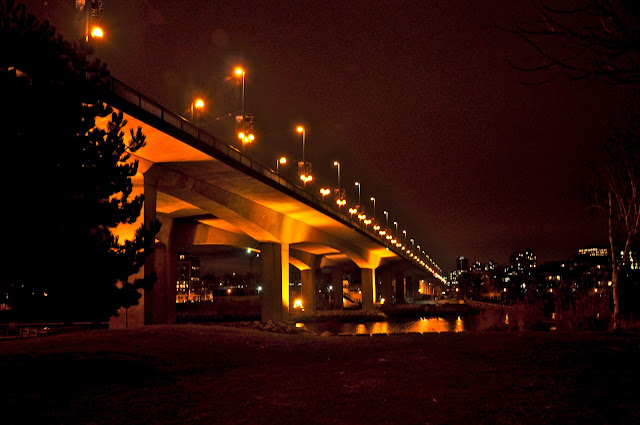 Alonzo King Lines Ballet
We saw this group at The Centre in Vancouver for Performing Arts.  One of my best memories of the evening was checking out the mirrors in the lobby, 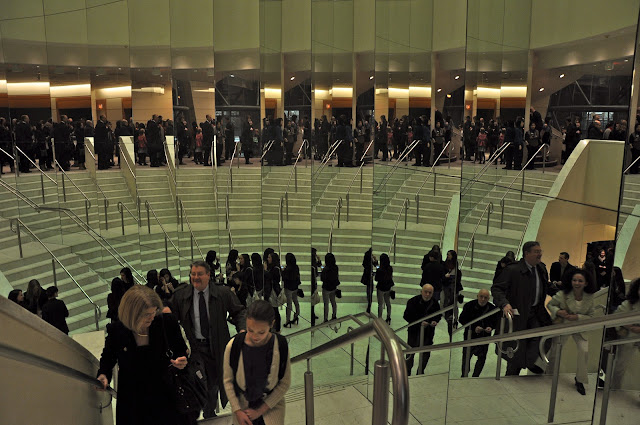 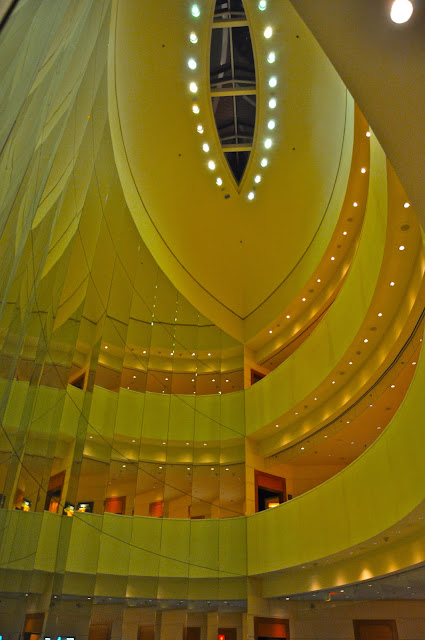 and of Bill's patience as I captured a triple-version of him.  In Bill's case, more is better :) 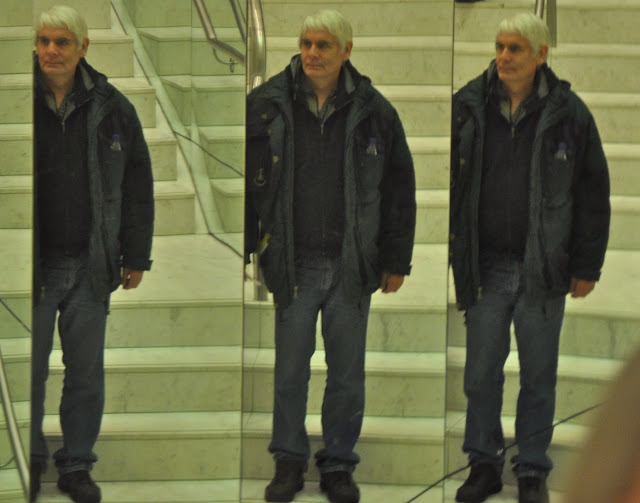 We neither hated nor loved the dancing.  I confirmed something about myself that I have been slowly realizing lately.  Without a narrative or emotional connection to art, it can leave me a bit cold.  I found the quote below by Alonzo King interesting, and could see what he was referring to in the lines of the dancers' bodies, as well as in the musical lines, but it wasn't enough to hold my attention throughout the performance (and I did stay awake :)

The term LINES alludes to all that is visible in the phenomenal world. ... Lines are in our fingerprints, the shapes of our bodies, constellations, geometry. [They imply] genealogical connection, progeny and spoken word.  [They mark] the starting point and finish.  [They address] direction, communication, and design.  A line of thought.  A boundary or eternity.  A melodic line.  The equator.  From vibration or dot to dot it is the visible organization of what we are.

Below is a picture that I took of the front page of the Georgia Straight.  It shows one of the dancers from the show, photographed by R. J. Muna.  The dancer portrays long, forward-moving lines, and the lighting illustrated their flow exquisitely. 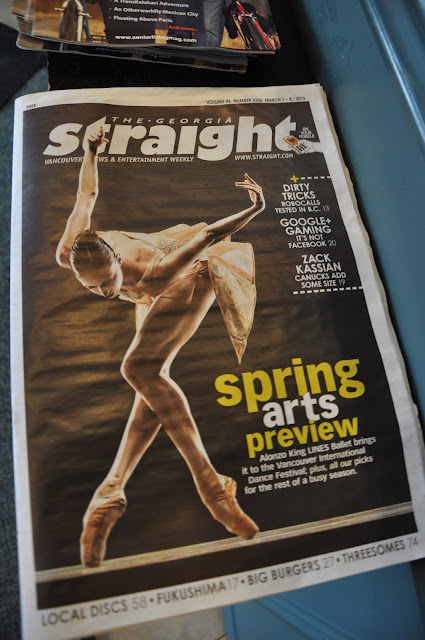 The Ugly One
We saw this play at Jericho Arts Club.  A Globe and Mail review of a performance of this play in Toronto describes the message astutely.  We enjoyed it, finding there was lots to think about, and enough humour to lighten the more serious aspects of society's obsession with physical beauty.  I took the photo below before the performance.  I thought the set was original, efficient and intriguing. 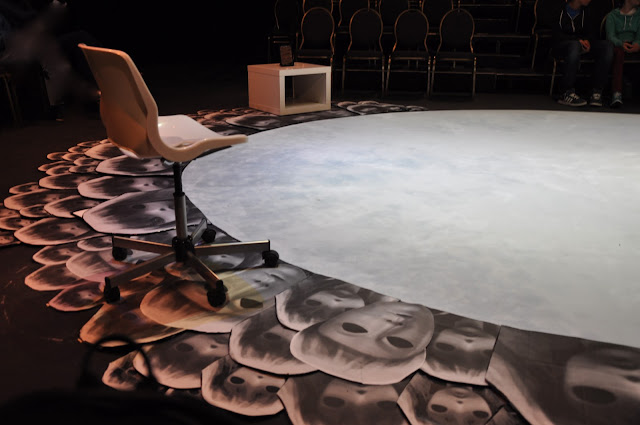 Confessions of the Other Woman
I found this play to be as complex and visually stimulating as Chelsea Hotel.  It is showing for another couple of nights! The lighting, sets, music, dance, script and message kept me transfixed throughout.  Valerie Sing Turner, the playwright and lead actress is wonderful to watch, as are her equally talented co-actors.  She is feather-light and lithe, and is lifted, swirled, twirled, thrown through the air and caught again, as though in a dream.  She lives one of my fantasies that will never be realized, one that I don't think I have ever before verbalized.  To be lifted into the air by a man, or to fly into his arms, and for it all to feel as though I were weightless - how totally freeing that must be.  I remember watching skaters and performers when I was a young girl, wondering how on earth they did it and knowing that was never going to be in the cards for me.  Don't laugh, Bill, and don't worry.  I promise never to attempt this at home :)  My admiration for Valerie Sing Turner, as well as for her co-actors, Kevin Loring and Matt Ward, is huge.  Kevin bared his soul (and a good portion of his body) in what must have required him to resolve more than a few image issues, and Matt..  well, I can only say that Bill and I were convinced he was a classically trained dancer, only to find out later that he grew up dancing hip-hop on the streets of Edmonton.  The variety of dance styles he excelled in, and the variety of roles he played convincingly, left me in awe.  In Valerie's case, as effortless as she made all that spinning through the air look, I saw her hobble out after the show, smiling bravely, but with some obvious aches and pains.  She told us she would be fine for the next show after a session with her chiropractor.  As light as she is, she still has to have incredible courage, strength and stamina to make this performance come off so believably.  I cannot recommend this play enough.  Go, if you can.
Photo taken from The Courier 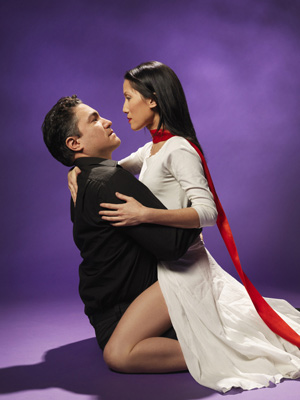 I took the photo below when we emerged from the Performance Works theatre on Granville Island.  The moon was floating in a shimmery haze and the blue lights of the tree cast an aura of exhilaration that stays with me, even as I write this post. 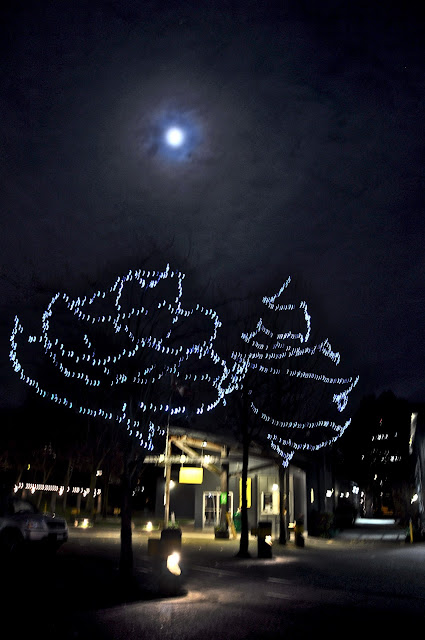 I include a few pictures of Black Jack, taken on a rainy day, to conclude this post.  Here, she mopes a little, and watches to see if she is garnering any sympathy from me.  Sympathy sometimes equals treats, and there is always hope.

I fiddle too long with the camera and she becomes bored, and drifts off. 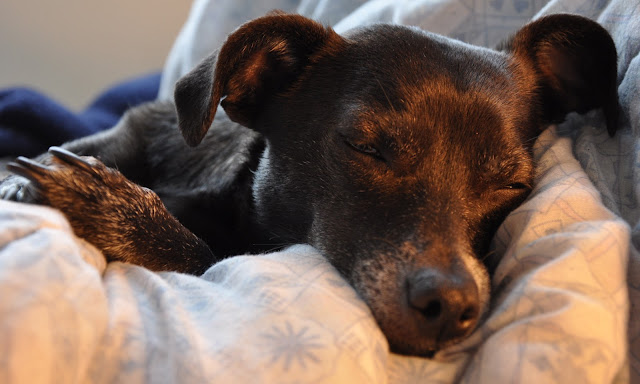 But, as my hand slips into my pocket, she perks up.  Yes, treats are on their way, and life is good.  May we all be so happy :) 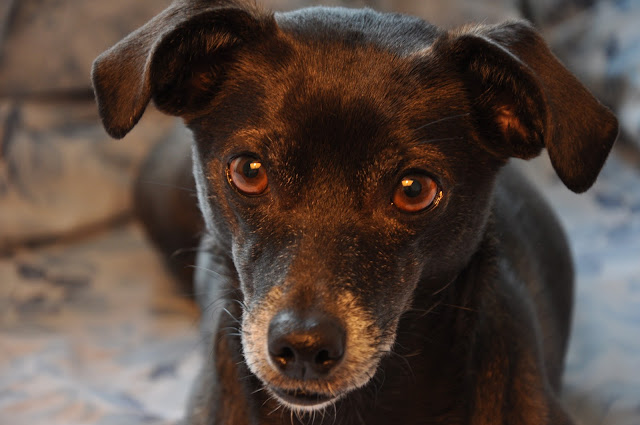