Black Jack is not in this photo because she has stolen her generous friend's bed, leaving only a tiny cushion with a towel as a substitute.  The amazing thing is that my sister's dog doesn't complain, but rather puts a corner of her body on the replacement with an, "Oh well, I guess that's the kind of day it's going to be" attitude.  I took this photo shortly before we left to see Ottawa's downtown sights at night. 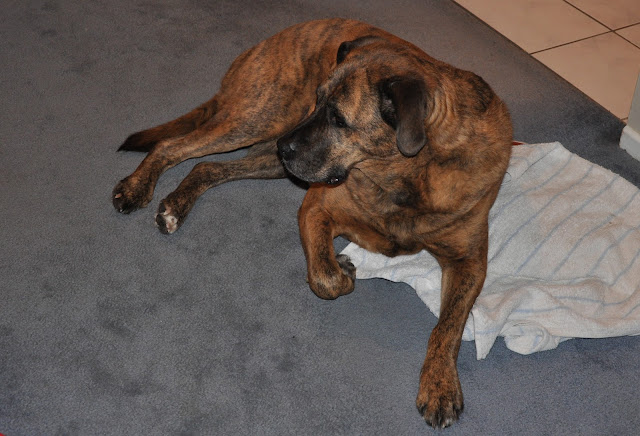 Winterlude is an Ottawa festival that began 34 years ago, and runs over three weekends each February.  The mild weather this year was a challenge, both for the ice sculptures and for skating on the Rideau Canal, but we did manage to see quite a few wonderful pieces, and we even walked a short portion of the admittedly watery-surfaced canal.  The lighting was beautiful and I thoroughly enjoyed our outing. 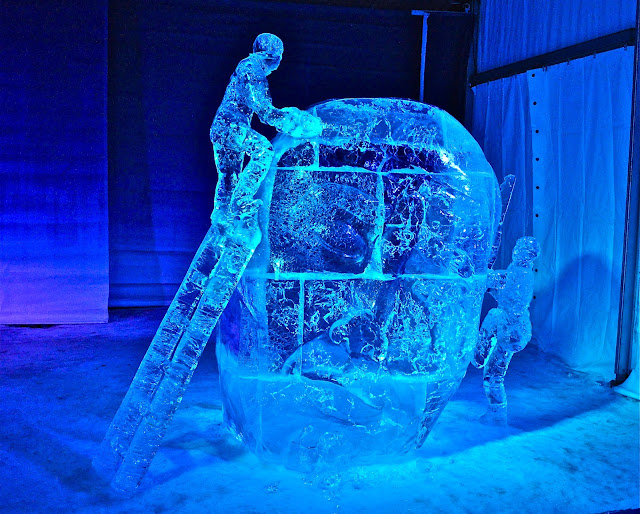 There were lots of interesting ways to have fun. 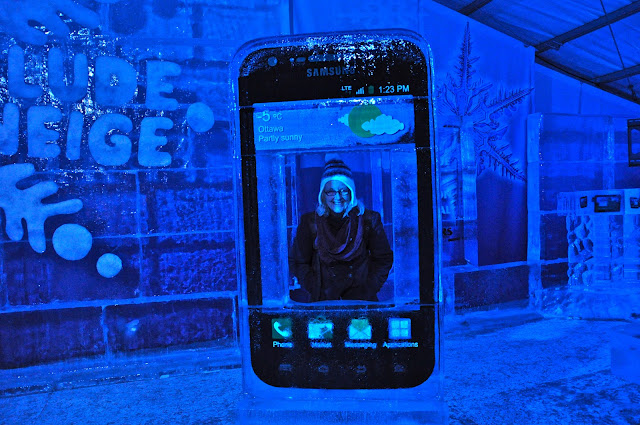 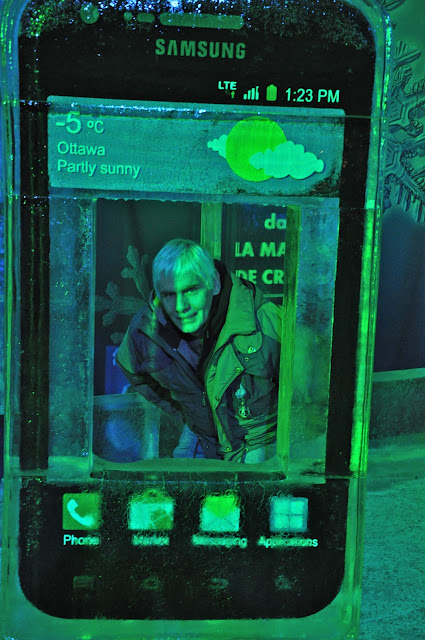 There was a magical feeling from the minute we stepped into the park. 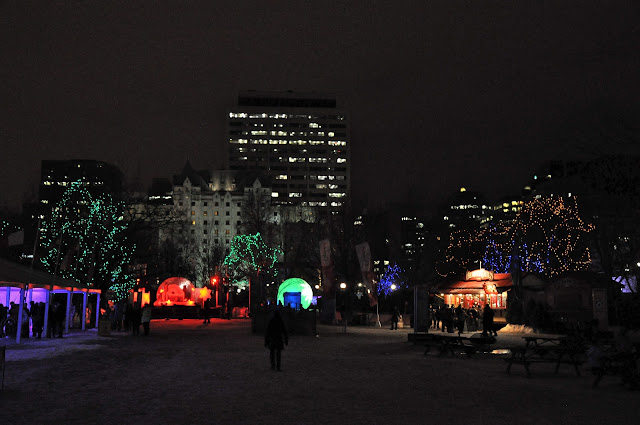 This was one of the prize winners. 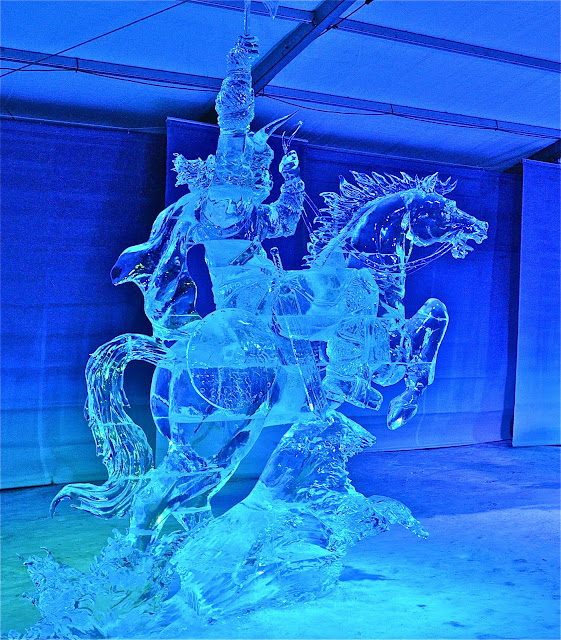 This was in honour of Queen Elizabeth's Diamond Jubilee; it was unfortunately melting, although the ice shards had their own lovely charm. 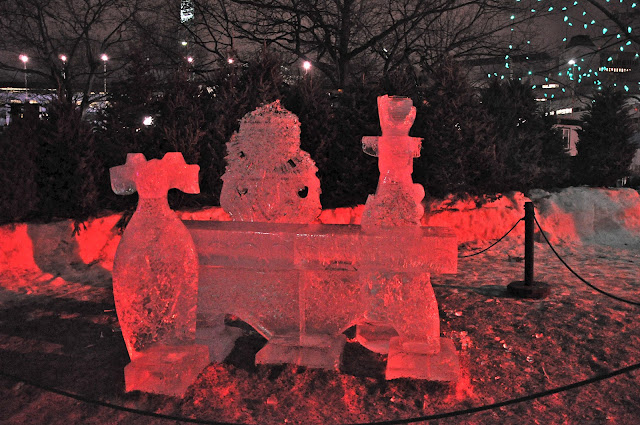 I loved these colourful sculptures. 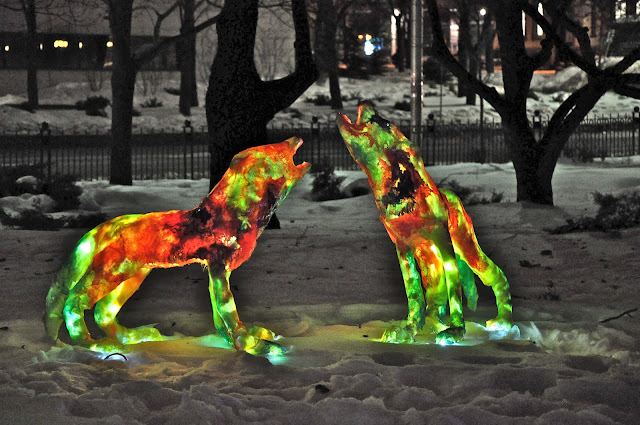 Below is the write-up about them. 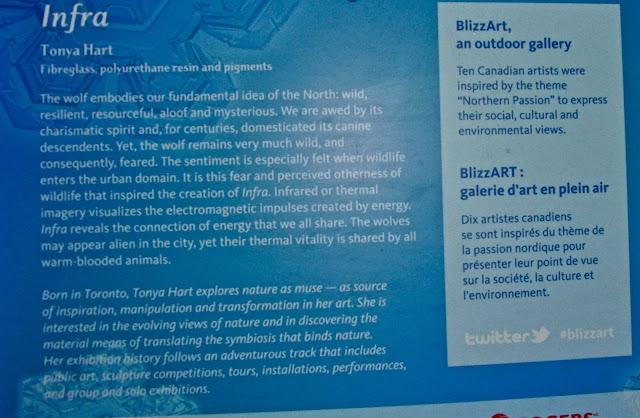 Beavertails are a much-loved tradition of Winterlude. 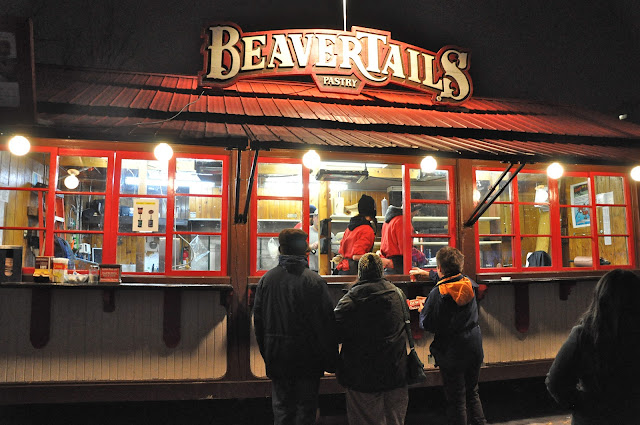 This is Bill, having his first-ever Beavertail.  I think it is "sugar cinnamon" flavour. 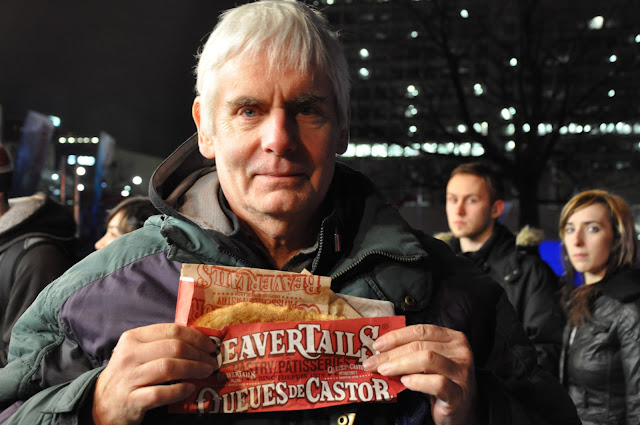 My sister is having a lemon one. 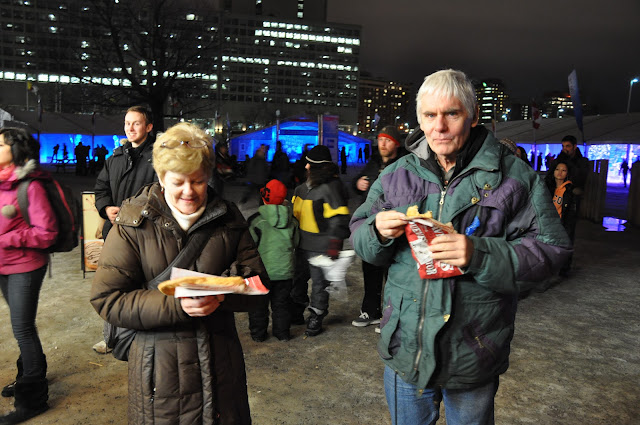 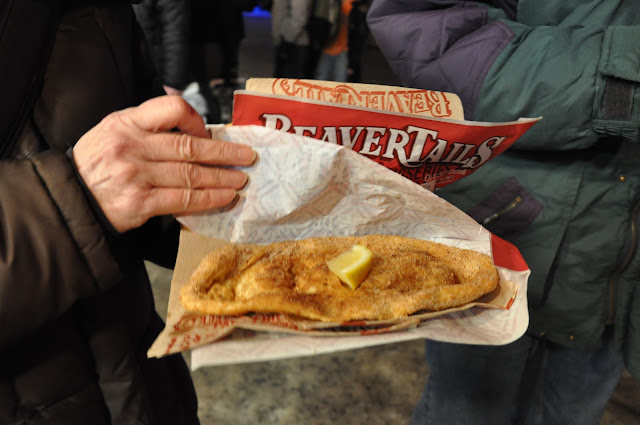 My joints unfortunately do not appreciate sugar, but I was really happy to soak up the pleasure, second-hand.  I think every flavour was declared a success. 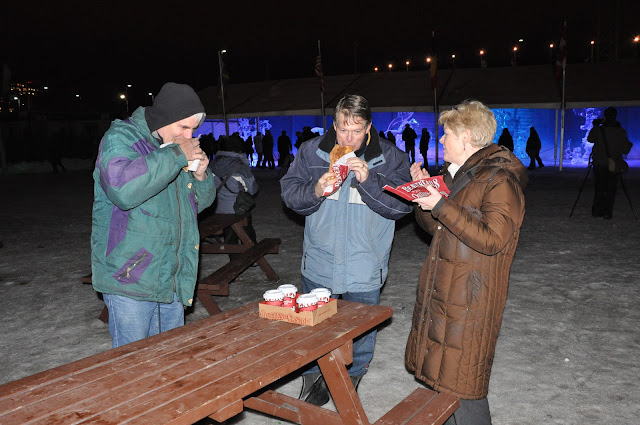 This was one of the points along the canal where one could rest, change skates, etc.  No skates required, though, to enjoy the advantages of a warm, comfortable bench.  I  hope my sister will forgive me this shot.  I do love it :) 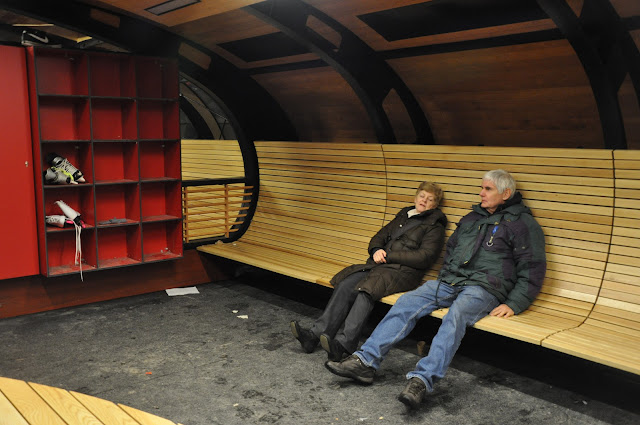 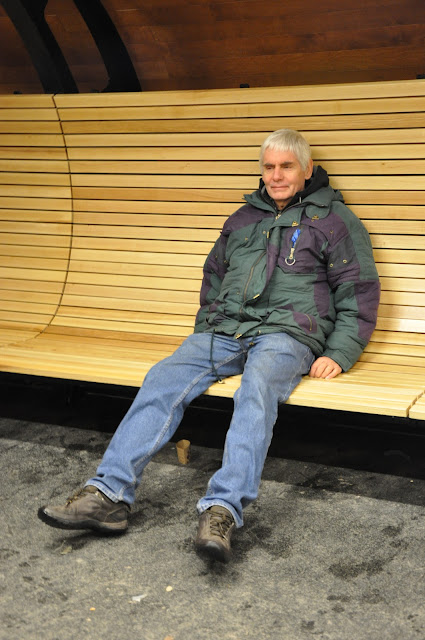 but notice how they traded off nap opportunities. 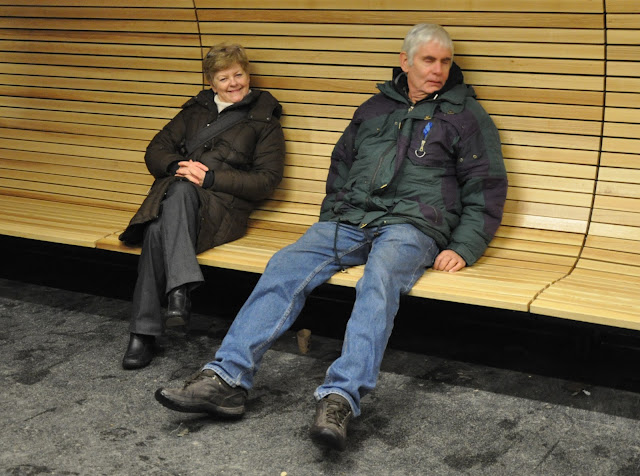 There were a few people bravely skating on the rut-filled canal.  I admired but didn't dare join them.  However, I was fascinated with these newfangled skates.  No more pulling laces tight.  Just turn the dial at the top.  Wow! 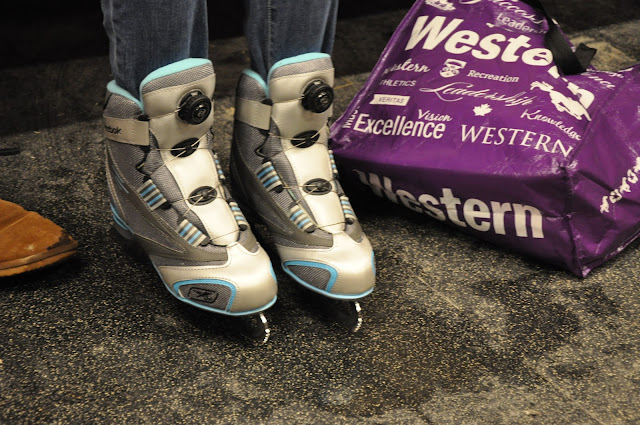 I loved seeing downtown Ottawa lit up at night.  So many stunningly beautiful buildings. 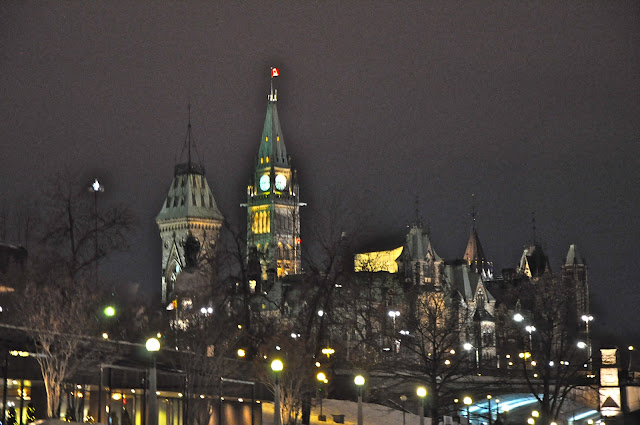 I believe this was the old railway station. 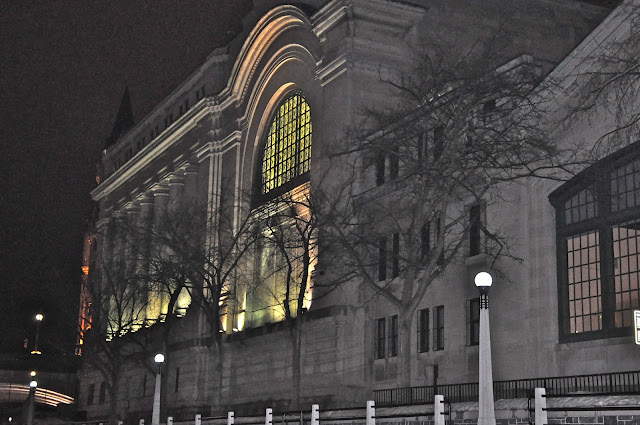 Seeing the National War Memorial was something that I felt to be very special.  Hard to describe the emotions.  My photos do not do it justice, but the act of taking them left me deeply touched. 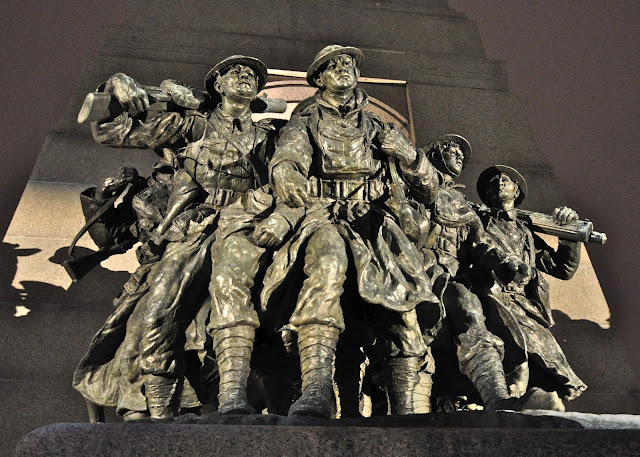 This site is an excellent one to give more information about it. 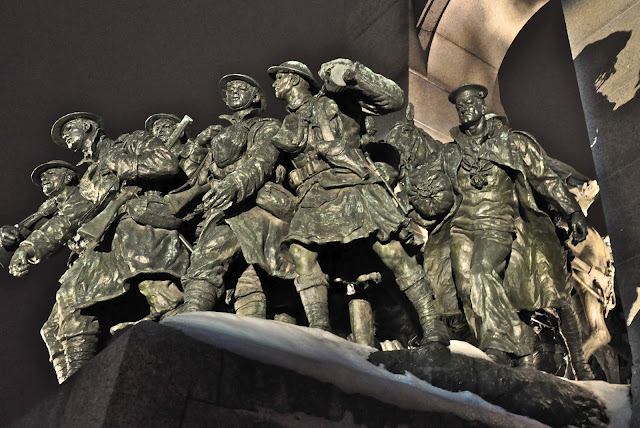 In checking out the memorial, my sister and I came across this skateboarder. He was endlessly and enthusiastically determined to complete a trick that was not successful during our twenty or so minutes observing and photographing him (at his request).  He told us his ADHD went undiagnosed for years, but that he is now under the care of a doctor whom he believes will help him.  Though it was truly humorous to watch and talk with him, what I love most about the memory of this encounter was our shared respect and admiration for his sweet heart and his hope. 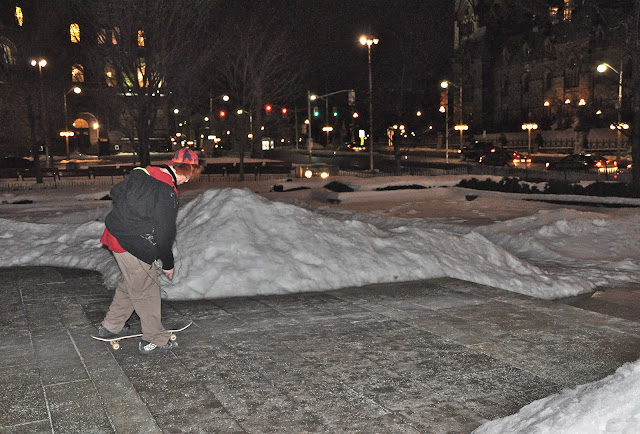 A last photo of the memorial to conclude this post.  Looks like there will be few more episodes to follow.  My especially fervent thanks go to my brother-in-law.  He really put some thought into finding activities that he felt we would enjoy, and he so "got it right" every time. 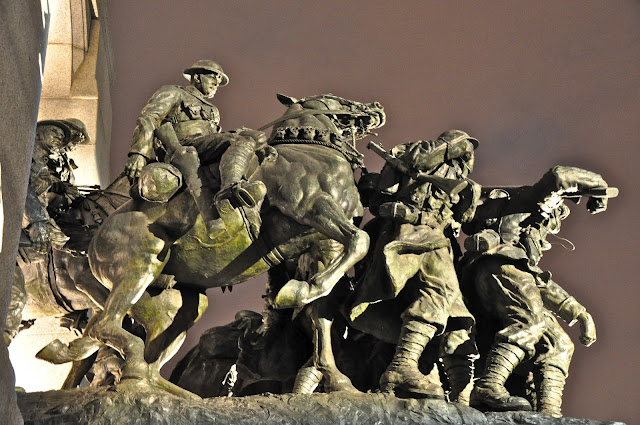