For the benefit of any new readers, I will repeat this introductory paragraph for each post that Bill and I write. His surgery in April and a life-threatening septic infection seven months later, as well as various other complicating factors, caused several episodes of delirium that resulted in cognitive dysfunction.  While he isn't fully recovered yet, the improvement is dramatic and he continues to show steady progress.  It is my great joy and privilege to be by his side to witness that as it happens.  All writing in black is by Bill, as transcribed from his memory journal.  All writing in blue is by Carol.  Thank you so much for reading this.  If ever you have a loved one going through surgery, you will need to be a very strong advocate for them.  Nurses and doctors work hard to bring their patients back to health but they cannot know your loved one as you do.  Report any personality or physical changes you see in him/her and follow up on that report, no matter how the medical system seems designed to resist your efforts.  The danger is not over when a patient wakes up after surgery.  Delirium can turn up a day or two later and mild cases can go undetected for months.  A sudden trigger can push a mild case over the edge.  Understanding that could very well save a life.

Because it is Friday, I am going to begin with some Orange You Glad It is Friday pictures taken in the past few months, but never posted.  I apologize for posting last week and not writing one comment to this wonderful meme.  I will do better this week.  Maria works hard and does an amazing job to keep that meme going.  I am grateful to her and know that she would love it if you take a few moments to check out some of the other photographs people have taken that feature the colour orange.

This nice lady was going to a football game. 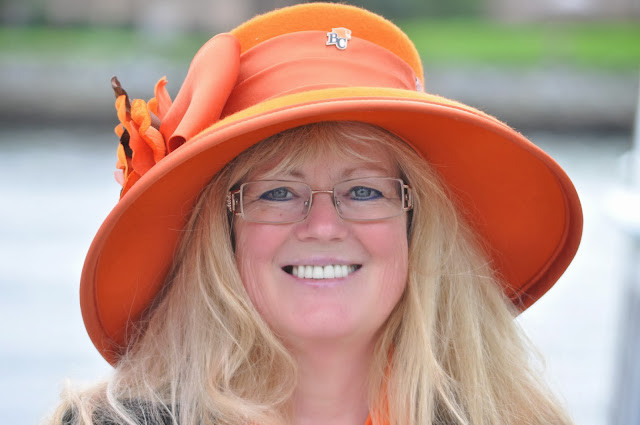 She kindly allowed me to photograph her happy face and wonderful hat. 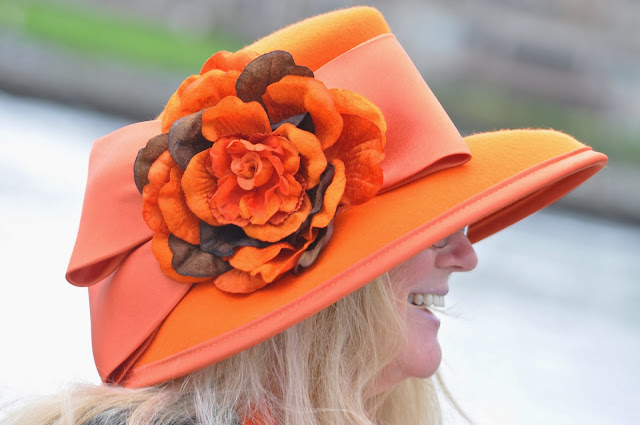 This is the entrance to an apartment building at the foot of my street. 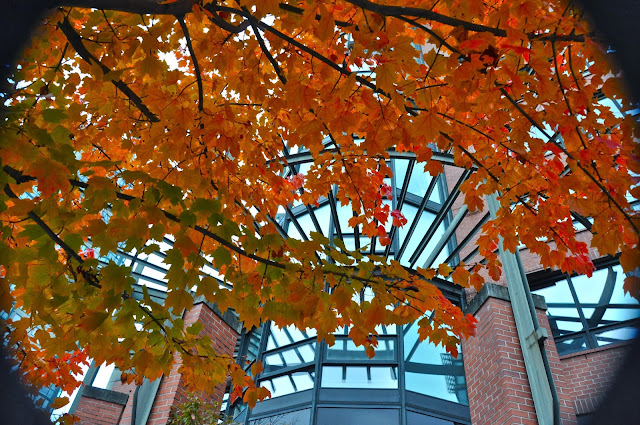 This painting-like scene was just along the seawall. 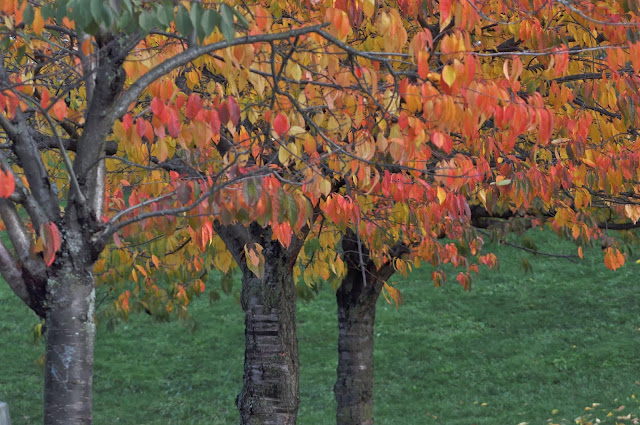 This was in David Lam Park. 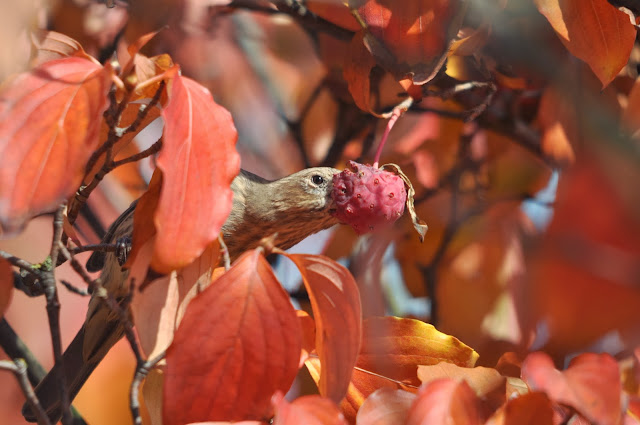 I took this on Davie Street as I walked to the hospital a few weeks ago to visit my dear Bill. 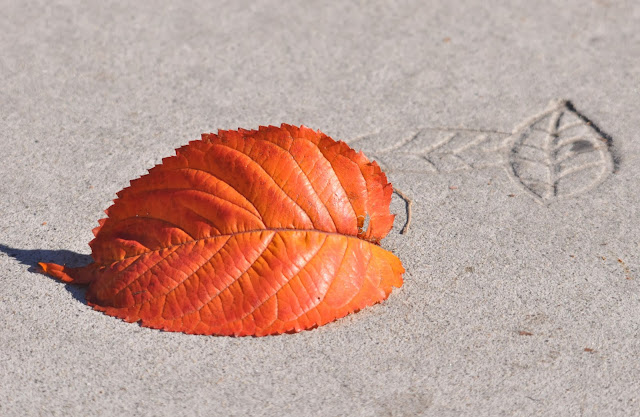 This one was just a few feet further along the way.  I liked it so much I took it to show the nurses and Bill.  Even the people in the coffee shop across the street loved it. 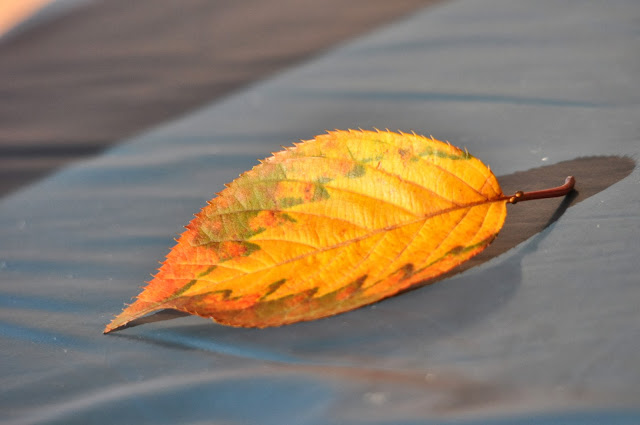 By the skateboard park.  I am addicted to trying to capture action shots. 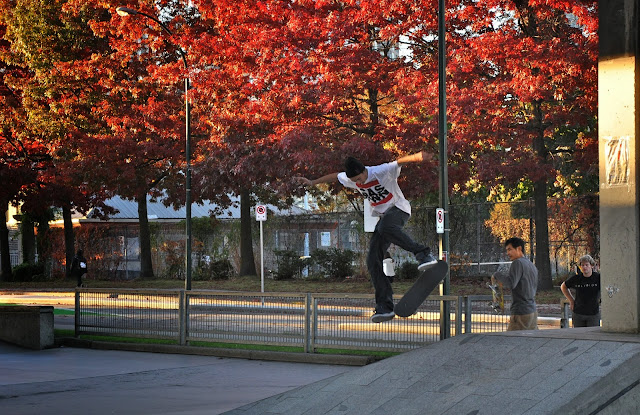 Wednesday, November 27th
Carol and I went to Fitness World gym for the group cycling class.  Sophie was the instructor and we did interval training.  I just kept my own pace and completed the exercises easily enough. 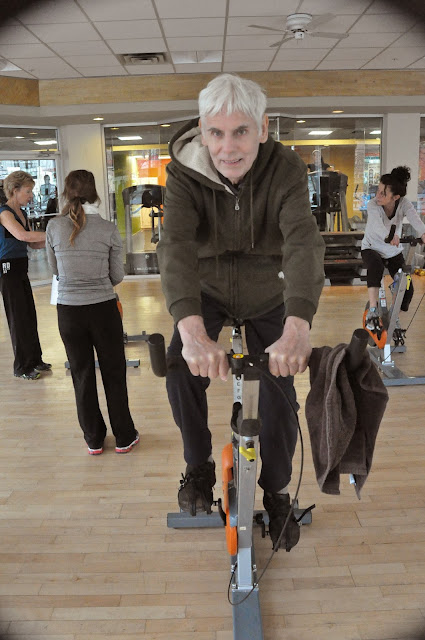 Next we walked towards Pacific Centre to look for running shoes.  We became somewhat lost and a very nice lady directing film crew traffic helped us with her smart phone to find directions to a Sportchek store.  We were in and out of the store within ten minutes with the help of a very knowledgeable clerk. Picture taken at home this evening.  Don't you think it also works well for Orange You Glad It's Friday? 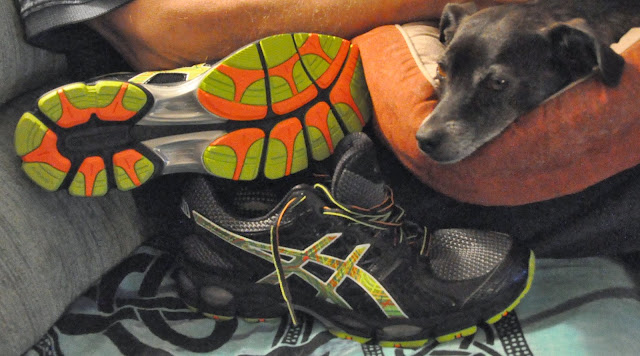 We walked to the Mainland Street Bean Around the World for a delicious latte and cookie.  Carol's cookie was vegan and sugar free.  She is so grateful to Eightfold Eats for these cookies.  Bill's cookie was neither vegan nor sugar free but it had a unique, homemade look that I feel surely added to its deliciousness. 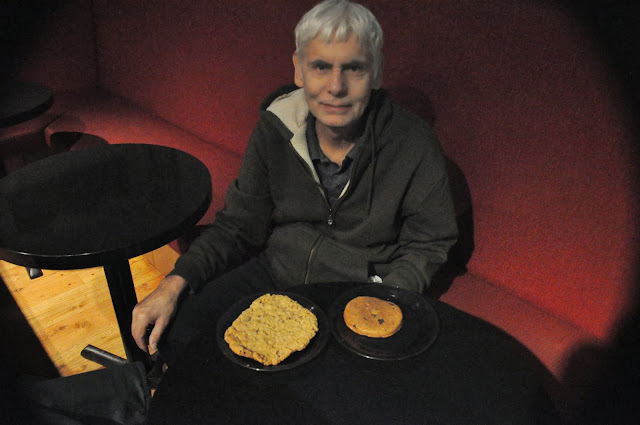 I left Bill napping and went out for Black Jack's walk just after sundown.  I remember this apartment with its symmetrical arrangement.. 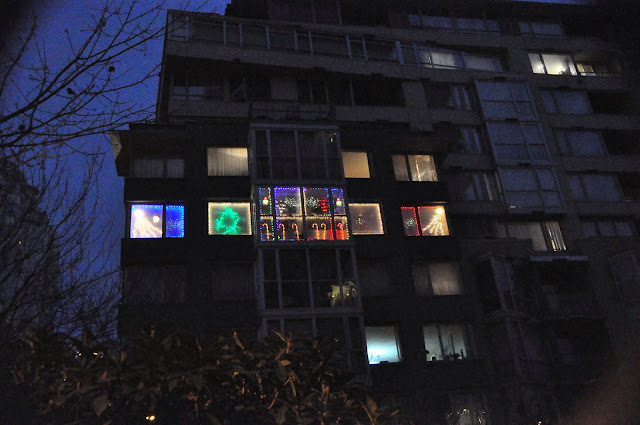 being one of the first to be decorated for Christmas last year. 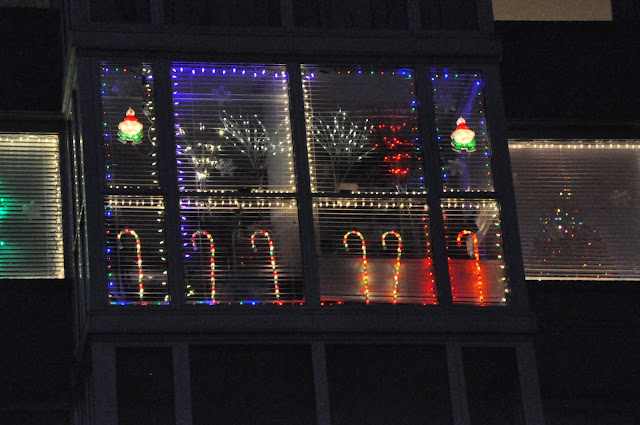 Black Jack and I walked along the Yaletown Ferry dock where I enjoyed the reflections and the lit-up Cavalia tents. 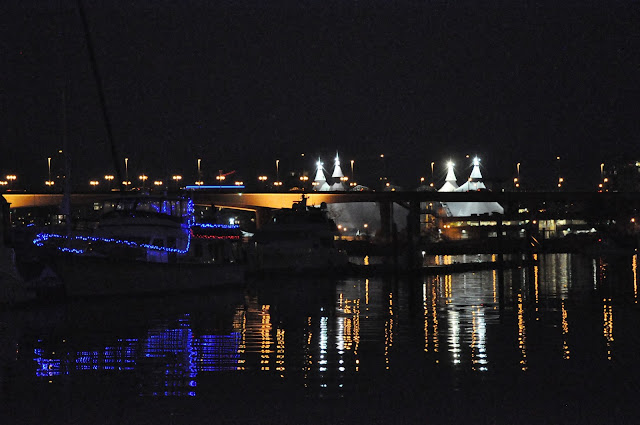 I spotted this sculpture/birdhouse at the side of a building, tucked almost out of sight.  The inside had criss-crossed branches for tiny birds to perch on. 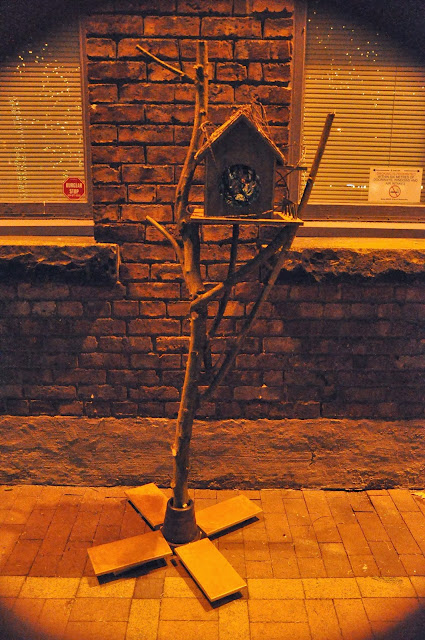 This evening after supper, Carol took pictures of me and the new runners.  Stay tuned for our plans for tomorrow. 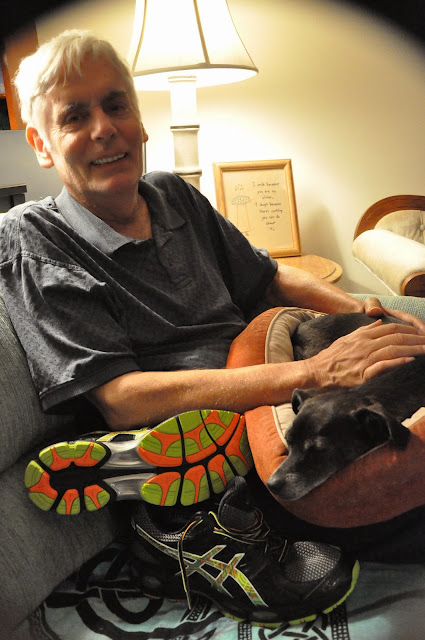 I wonder if Bill is thinking something along the lines of: "Look what I've gotten myself into!" 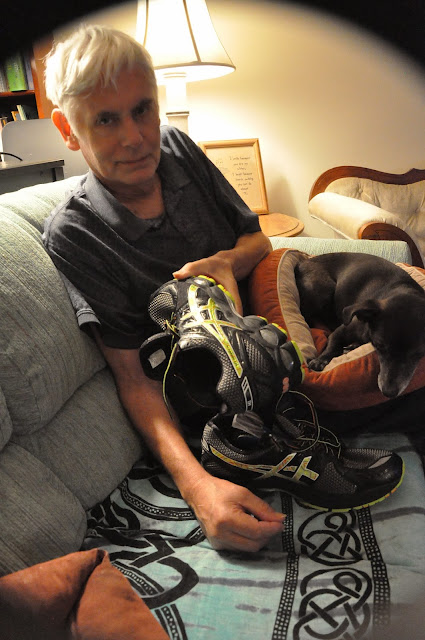 Bill writes in his journal just before bedtime. 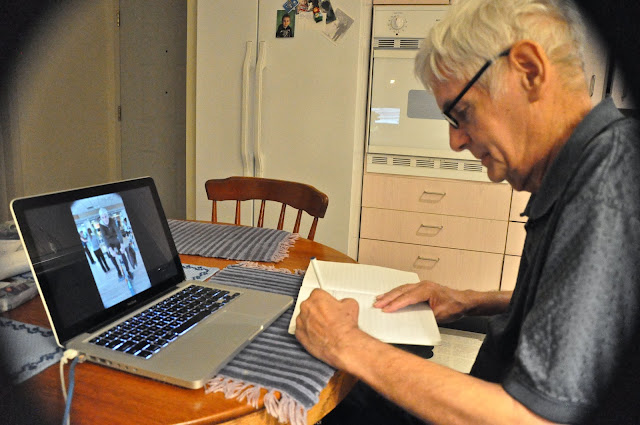 Thursday, November 28th
As it turned out, our plans for yesterday included a lot of rest and no pressure for Bill to do anything whatsoever.  Perhaps, the gym membership will not be used a whole lot for now, but it will be there if and when Bill feels ready.  In the mean time, I think those wonderful shoes kept Bill's feet comfortable for a happy walk to Harrison Galleries for deliciousl lattes and cookies.  This is fast becoming one of our favourite haunts.  Tables scattered about a large space that has extraordinary art on the walls, great coffee, treats that include Eightfold Eats vegan-sugarfree items, and superb service is the perfect recipe for a go-to place that always makes us feel good.  Here are a couple of photos taken there yesterday: 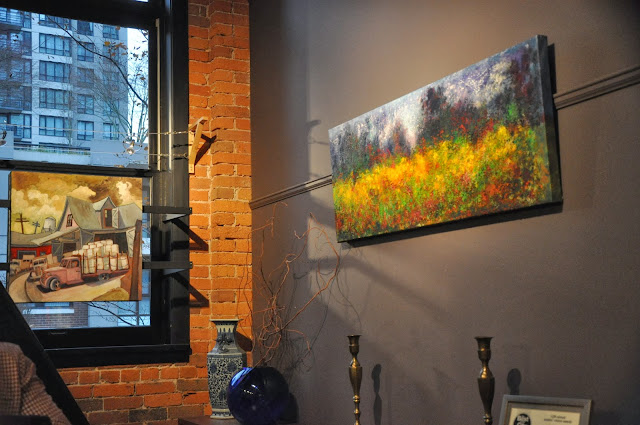 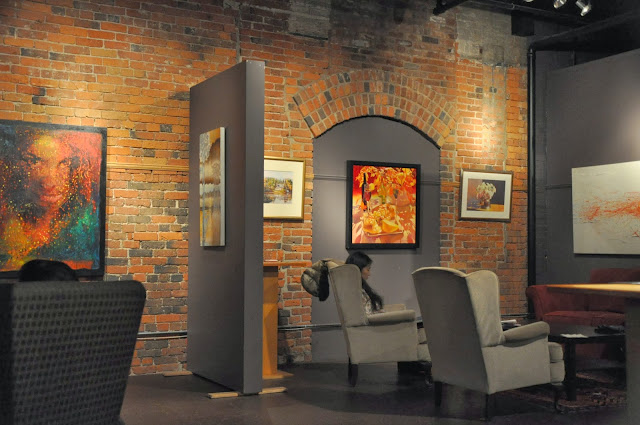 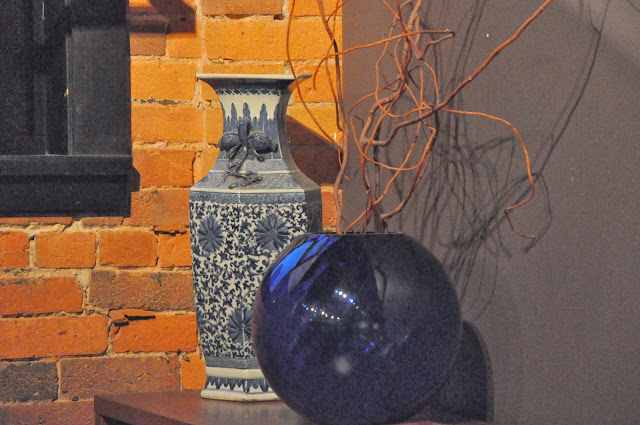 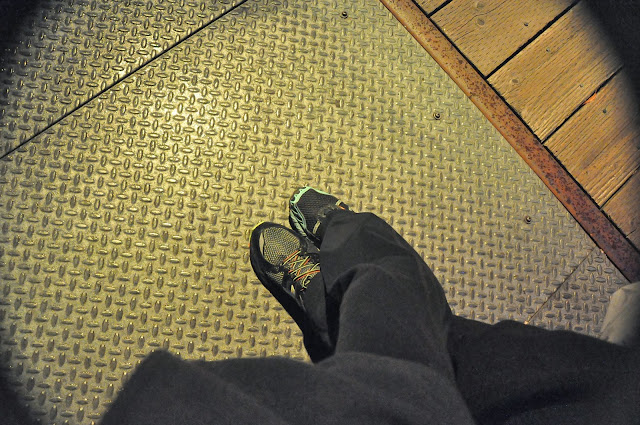 
This morning, Bill and I listened to Tchaikovsky's 1812 Overture on CBC, complete with Colin Davis, the Tanglewood Festival Chorus and the Boston Symphony.  I wasn't able to find it in a youtube version, but did find one with paintings, two different choirs and canons as well.  It is at the end of this post and I recommend it if you have time for a listen today.

Bill's ears perked up when he heard the CBC version.  He wrote this in his journal:
Listened to Tchaikovsky 1812 Overture, a wonderful rousing piece of music, much loved world wide.  He began writing it on October 12,1880 and finished it in six weeks.  It was to be performed at the opening of a new cathedral and was also to celebrate the 25th anniversary of the coronation of Alexander the 2nd.  Alexander's assassination took the wind out of those grandiose plans and the overture's premiere was delayed until 1882.  It was a fairly low-key performance taking place in a tent as the cathedral still hadn't been finished.  It was really interesting to Bill and to me that Tchaikovsky traveled to New York City to conduct a performance for the dedication of Carnegie Hall in 1891.  "Who knew," said Bill, "that Carnegie Hall was that old."  That thought took him to the photographer, Bill Cunningham, whom I have written about before.  We recently watched a documentary about him, and though we had seen the movie in the theatres, enjoyed it every bit as much the second time.  He was a talented, driven, sweet soul. You can watch the documentary about him at this link from Knowledge Network.

Bill Cunningham lived in a small apartment in the Carnegie Hall building.  What a rich history surrounded him in his tiny apartment. 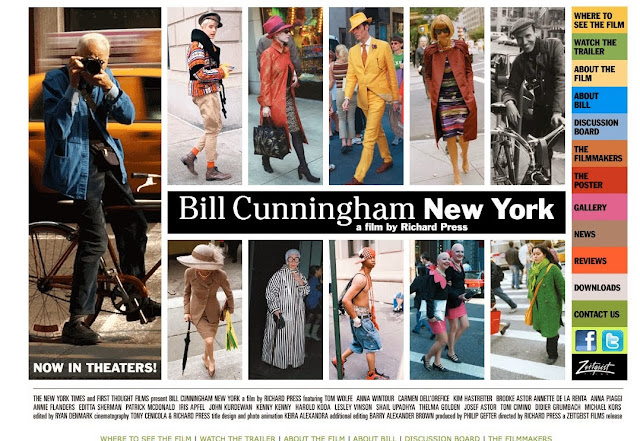 Have a wonderful Friday and a beautiful weekend too.  Every minute is precious.  Bill and I both thank you for stopping by.  Your visits and thoughts mean a great deal to us.