As with the first two posts transcribing Bill's memory journal, I will add my comments in blue.  The ones in black are Bill's words as written into his journal or added in the form of captions to the post.  To say yesterday was a joyous one for me would be the understatement of the century.  Only in the realm of my wildest dreams could I have imagined, a couple of weeks ago, attending a concert and walking home from Kits to Yaletown with Bill. 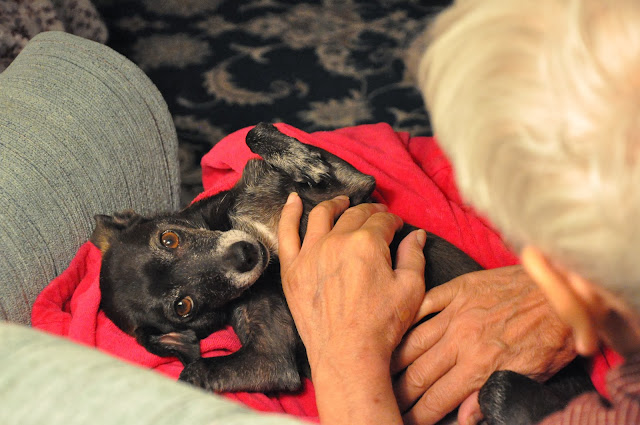 Did anyone notice the red housecoat that serves as my blanket? 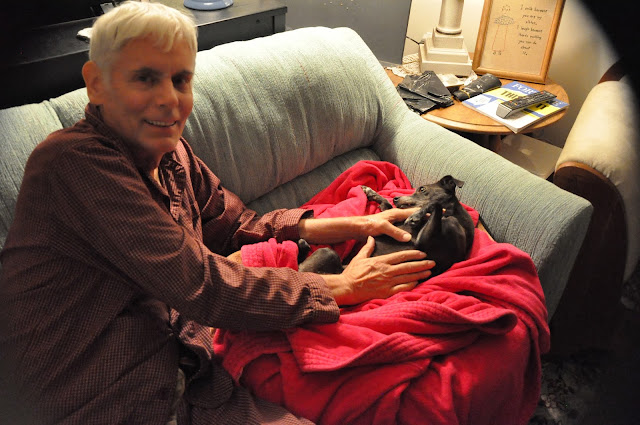 Saturday, November 23rd
Listening to Christina Petrowska-Quilico on CBC radio.
(Photo taken by Susie Yen at the Canadian Music Centre in Toronto.  Link above takes you to that article in the Epoch Times.) 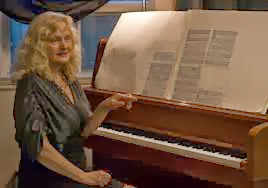 The piece is called Glasshouses #5 by Ann Southam. Every Saturday morning, a program called "This is My Music" highlights the favourite musical selections of famous artists.  Christina is well known for her interpretations of contemporary music and she wanted to honour the Canadian composer, Ann Southam who died three years ago tomorrow.  She was only 73 (young from my perspective) and left 14 million dollars to the Canadian Women's Foundation.
Rosina L'hevinne Chopin Concerto #1.  The Chopin is wonderful "zone-out" music.  If you are looking to bring a feeling of well-being and exquisite peace into your mind, I think you would love this video of Rosina playing the Chopin.  This was also one of the pieces showcased by Christina Petrowska-Quilico.
Had a nap. 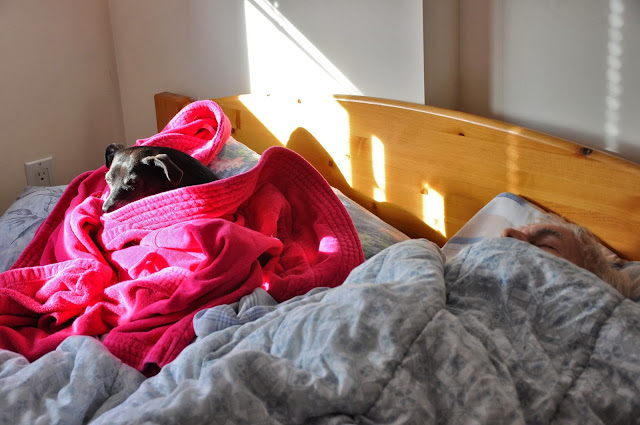 Then Black Jack helped me make the bed. 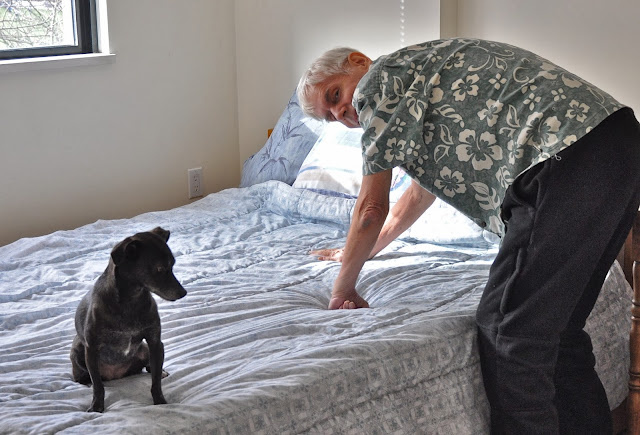 Learned about the laundry card.  Should have taken a picture.  The laundry cards used to access the machines in my building are a fairly complex change from the old coin in the slot system.  They still confuse me at times.
Read the nice comments on our latest blog.  Bill was so pleased and so was I.  Thank you everyone!  Here, he is eating his favourite (and just about only) dessert since leaving hospital.  Häagen-Daz Vanilla Bean Ice Cream and a mixture of fruits.  (At least, I manage to vary the fruits.) 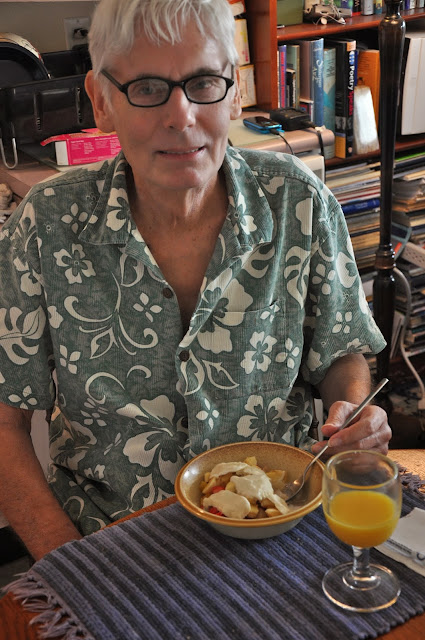 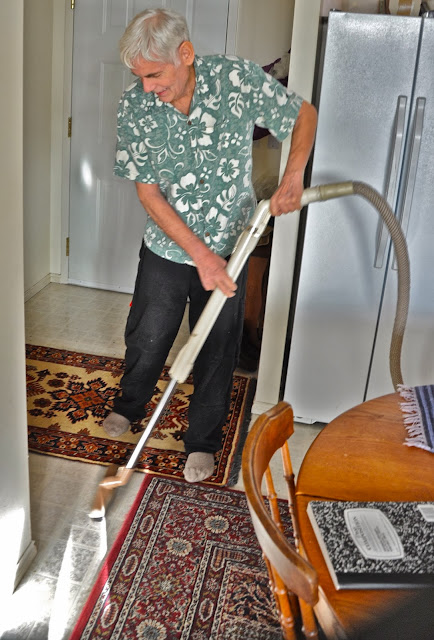 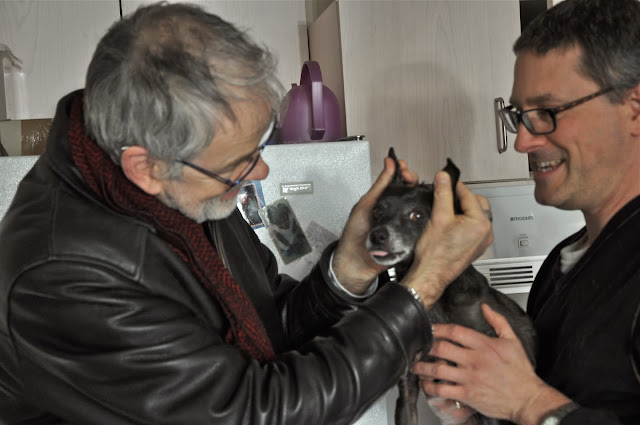 "Let me just lick your glasses.  They'll be as clean as a whistle." 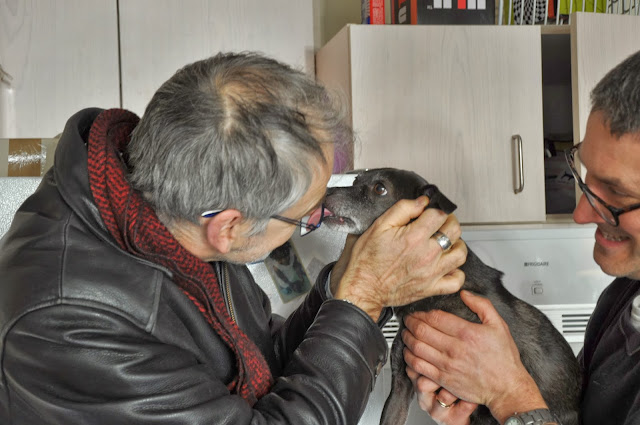 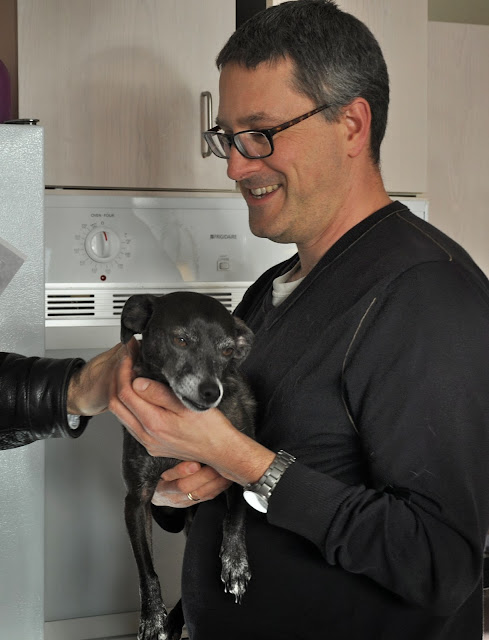 Bill, wake up!  Paul, you can't have her :)  Does Michael know something we don't? 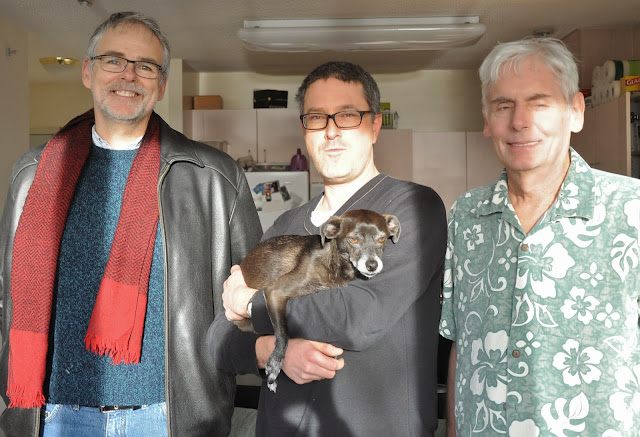 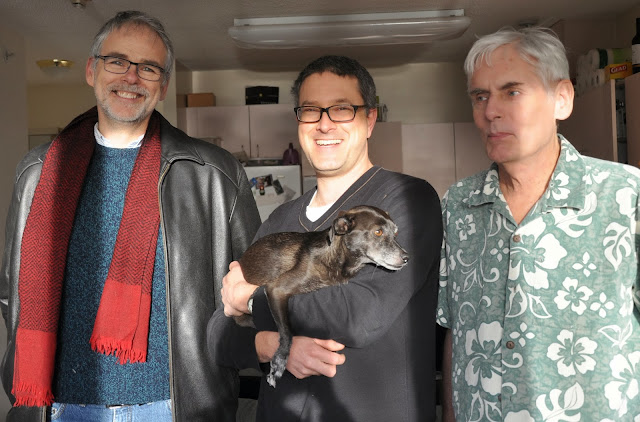 Shopped at Chintz for a tablecloth.  The sales person at Chintz was so helpful.  She was indeed!  A young girl and clearly new on the job, I thought she was exceptionally kind.  They didn't have a tablecloth that worked for me, but she promised to get us information so that we could order one.  I do love going in that store.  As Bill noted, keeping track of the inventory would be a daunting task for even the most organized of staff. 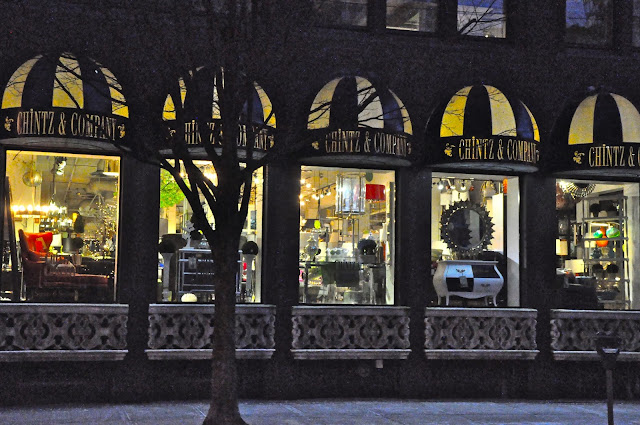 Went for lattes and a vegan cookie at Harrison Galleries.  Bill dreams of the Hotel Nord.  Does anybody know if that was a hotel in Yaletown? 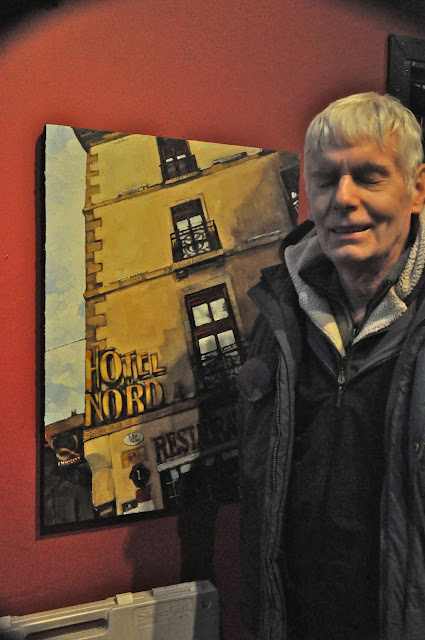 Saw first live concert for a while (!) at St. Mark's. Seven long months, actually. Beautiful baroque music trio (violin, lute and cello). Here's the link to the poster for that concert.  Arthur Neele on the left, Konstantin Bozhinov in the centre and Marina Hasselberg on the right.  This was taken during a split second when I peeked in the door before the concert started.  Konstantin's lightening quick wave was delightful. 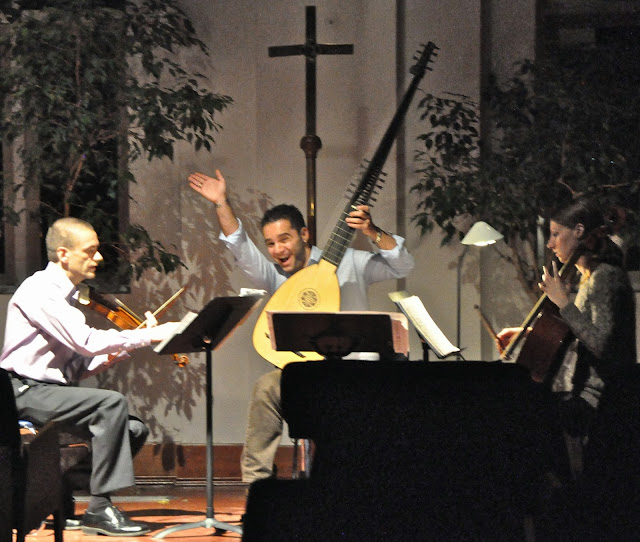 Bill had a cup of tea at intermission.  His expression doesn't do justice to his enjoyment of the evening.  I could feel it as though it were pulsing through my own veins.  I'll try not to gush, but the memory will be among my favourites for a long time to come. 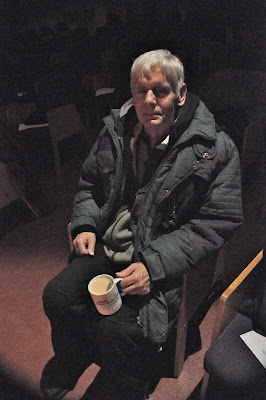 Interesting comments before every piece from Arthur, Konstantin and Marina.  My favourite piece was written by Corelli (1653-1713).

I think my favourite piece (so hard to choose) would be Chiacona by Bertali.  I wish I could give you a you tube performance by Marina, Arthur and Konstantin, as they managed to exude playfulness and light within a technically and musically brilliant performance.  Here is a second-best option..  a version of the piece found on line.
The musicians were kind enough to stay for some photos after the concert.  Bill and I were treated to a little encore while I snapped away.  Hoping to post more of these on facebook but for now, I find this one to be utterly charming.  Thank you so much, Arthur, Konstantin and Marina! 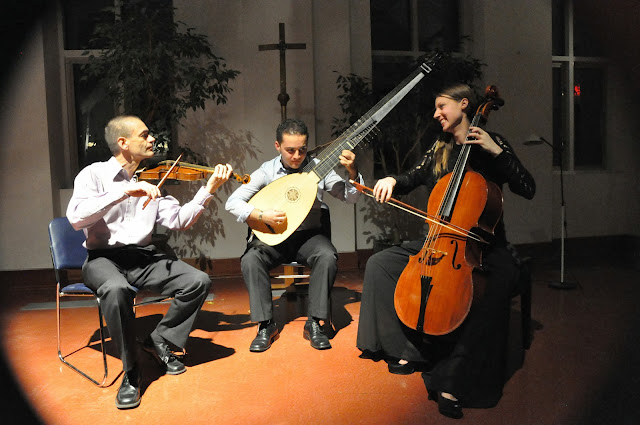 Tree on Cornwall Street with its Christmas lights reflected in a window. 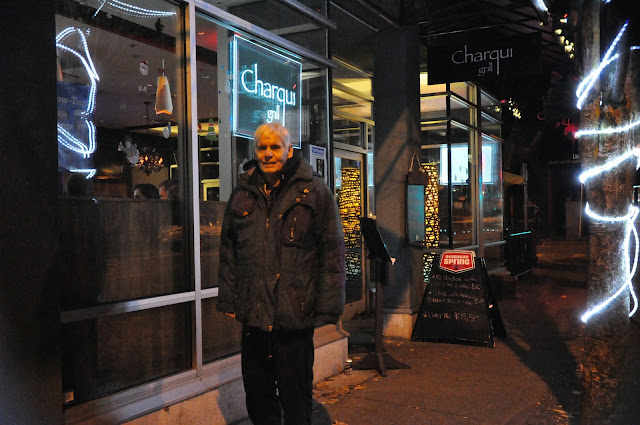 I just learned that Vancouver has a street named after one of my favourite nuts. 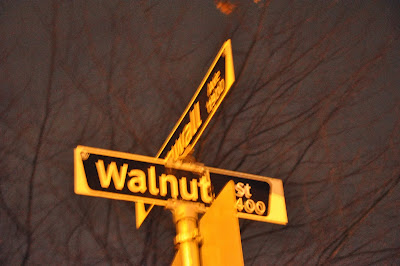 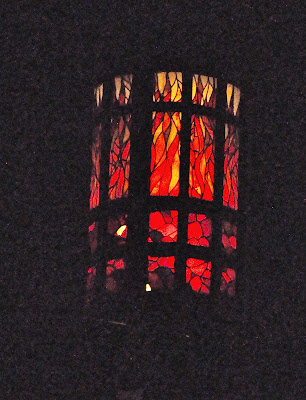 Jericho boatyard in the foreground as we walk over the bridge. 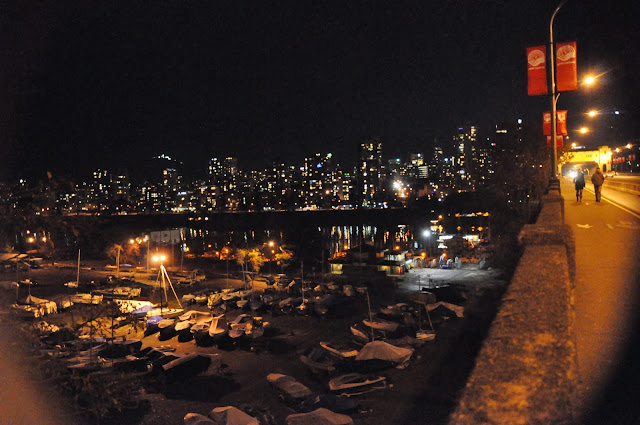 Where is Bill? Look at lower left of the bridge structure ahead. 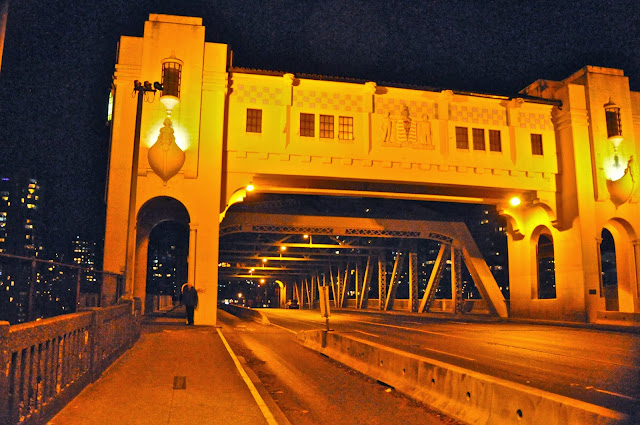 Spotted this "Found Art" left by an anonymous artist. 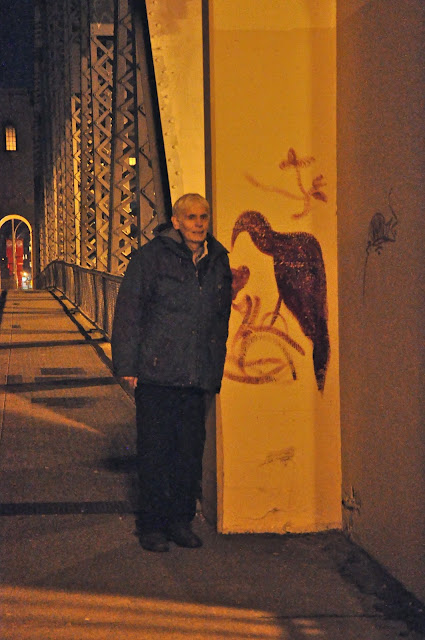 Each of theses rivets required two people to create manually.. no automation whatsoever.  Very labour intensive.. front and back had to be done at the same time. 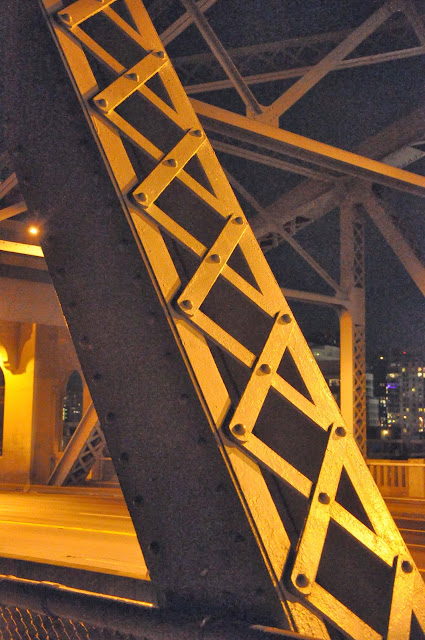 To those of you who have written comments, I am hoping to get to your fine blogs very soon. Bill and I thank you so very much for stopping by!
Posted by Black Jack's Carol at 3:24 PM