Bill and Carol: Post #5 - We "Tripudiate" for the good life.

For the benefit of any new readers, I will repeat this introductory paragraph for each post that Bill and I write. His surgery in April and a life-threatening septic infection seven months later, as well as various other complicating factors, caused several episodes of delirium that resulted in cognitive dysfunction.  While he isn't fully recovered yet, the improvement is dramatic and he continues to show steady progress.  It is my great joy and privilege to be by his side to witness that as it happens.  All writing in black is by Bill, as transcribed from his memory journal.  All writing in blue is by Carol.  Thank you so much for reading this.  If ever you have a loved one going through surgery, you will need to be a very strong advocate for them.  Nurses and doctors work hard to bring their patients back to health but they cannot know your loved one as you do.  Report any personality or physical changes you see in him/her and follow up on that report, no matter how the medical system seems designed to resist your efforts.  The danger is not over when a patient wakes up after surgery.  Delirium can turn up a day or two later and mild cases can go undetected for months.  A sudden trigger can push a mild case over the edge.  Understanding that could very well save a life.

I am posting this to ABC Wednesday for the letter T.  Our new word of the week is tripudiate, which means, according to this list of unusual words that begin with "t", to exult or dance for joy.  Probably, most of this post could fit into that theme.  I am definitely tripudiating (exulting) in Bill's progress.  While he is not fully in gear for dancing with joy, he is definitely showing tripudiation in the good life we are having together.  Right, Bill? Yes, I agree with all of the above.

I woke up yesterday morning thinking that this might be the day to talk Bill into joining Steve Nash Fitness World, the gym I have belonged to for several years.  When we first met, we went to the gym together, but  Bill eventually decided he wasn't a gym-going sort of fellow.  I have been thinking about attending the classes after a hiatus of a couple of months and figured attending together would be good for both of us.  Our conversation resulted in these words in Bill's journal.

Carol is certain I will profit from joining her gym but I am somewhat uncertain, to say the least.

I also asked Bill about his family background yesterday morning because I am embarrassed to say many of the details become confused in my mind.  I learned that he was a bit hazy about a few details himself.  In his journal, he wrote:

Must talk to Phyllis (Bill's sister) about Mom's ancestry.  On the Keffer side, I am OK but I am hazy on the Glass side.  Phyllis emailed some information almost immediately.  Thanks, Phyllis!

I had planned to jump in right away and take Bill to a gym class yesterday morning, but something in his expression suggested it would be better to go a bit more slowly.  We decided to go for a walk in David Lam Park instead.  Bill wrote:

Tupper has been scoring the occasional dog treat from me, though I know that feeding birds is a poor idea.  He approaches much more closely lately, and this morning, walked along  beside us.  I felt like we were taking our crow (I have a few that also follow me for treats), our seagull and our dog for a walk.  Black Jack doesn't really approve of my giving away her treats, but she remains fairly respectful of the crows (thus far unnamed) and Tupper. 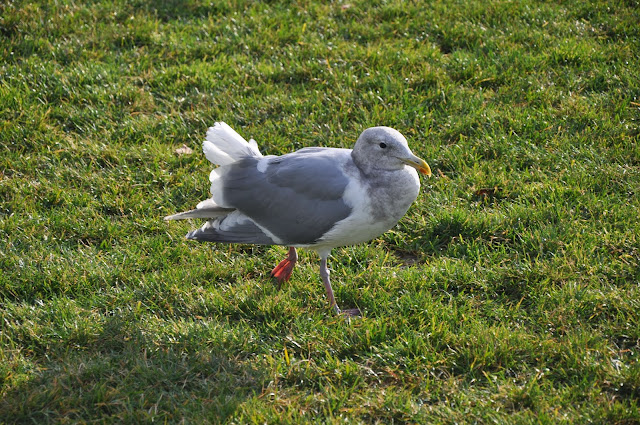 "My" crows rarely caw at me, but they do stare quite demandingly if I don't leave at least a couple of treats for them. 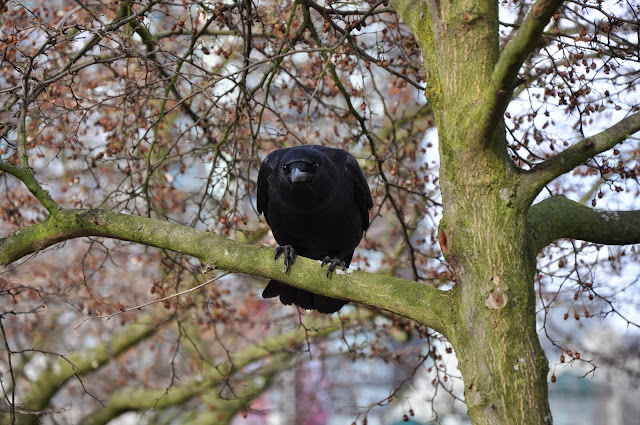 Bill was happy to feel the warmth of the sun, and we both loved these mauve berries.  I thought they went very well with the mauve in his coat. 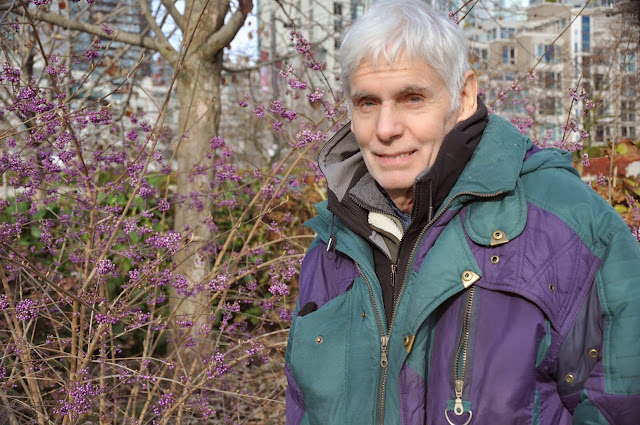 Tupper quickly figured out that Bill was an easy touch.  Here, he walks determinedly down the steps toward us, waiting for the treat that would come from Bill. 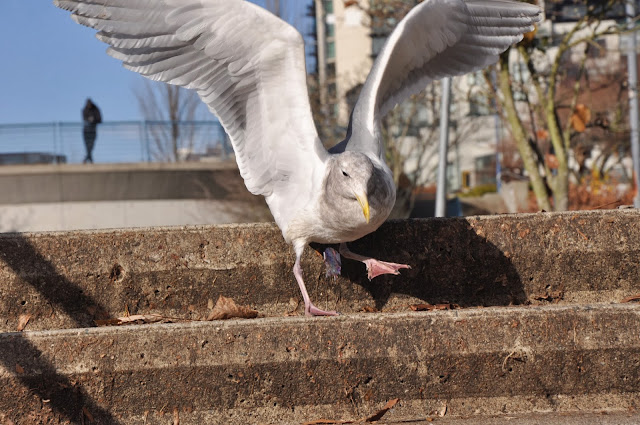 Another seagull came along, causing Tupper to lift off. This is the most interesting picture I feel I've taken of him. 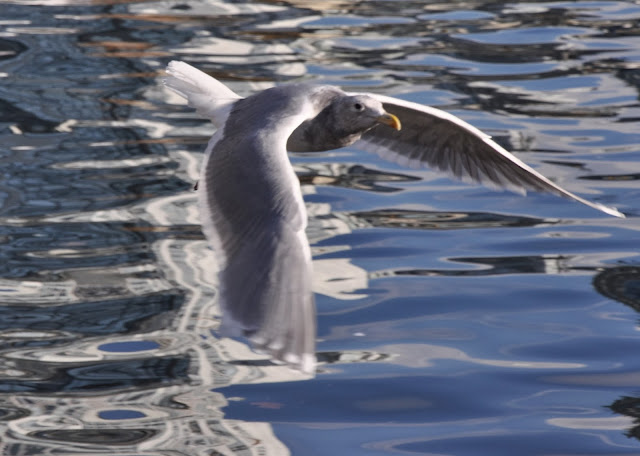 This one worked pretty well too.  Love that tail pointing up.  In all the years I've been watching seagulls, I've never seen a tail do that. 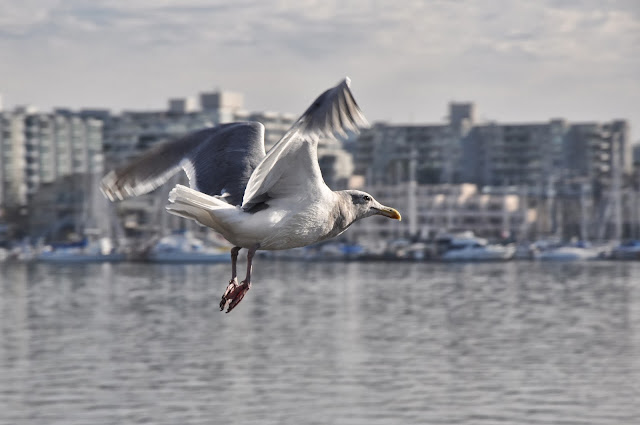 The high rises around False Creek sometimes catch the light and offer incredible reflections  that I enjoy.  Bill wrote in his journal: Kaleidoscope-like reflections in False Creek. 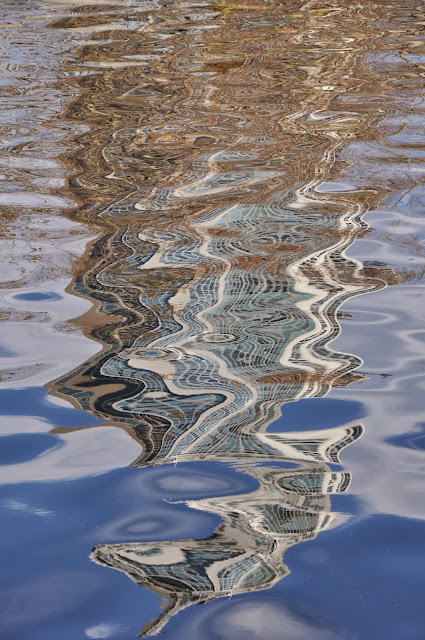 Since the gym was still on my mind, I thought it might be a good idea to break Bill in gently with a few outdoor exercises using the "equipment" around us.  Bill wrote: Testing my balance skills. 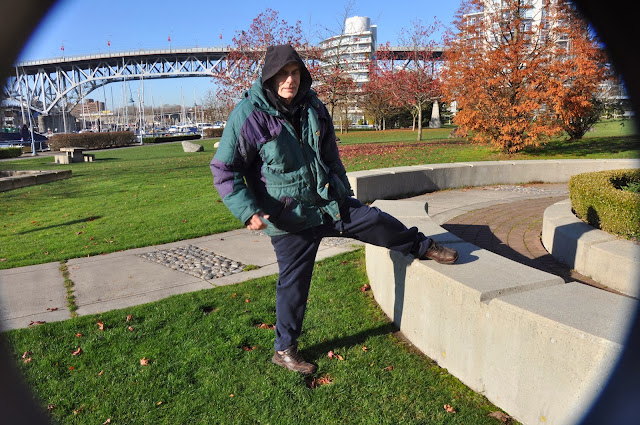 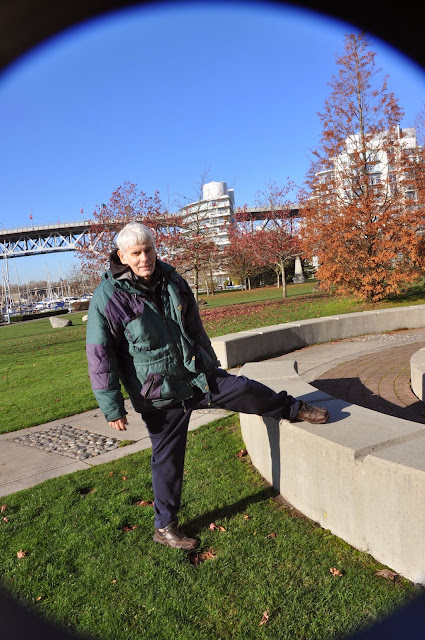 Gate to Aquabus Hornby dock.  Today I noticed these two aquabus models that had probably been there for years.  I had never noticed them before either, though I had passed this spot hundreds of times. 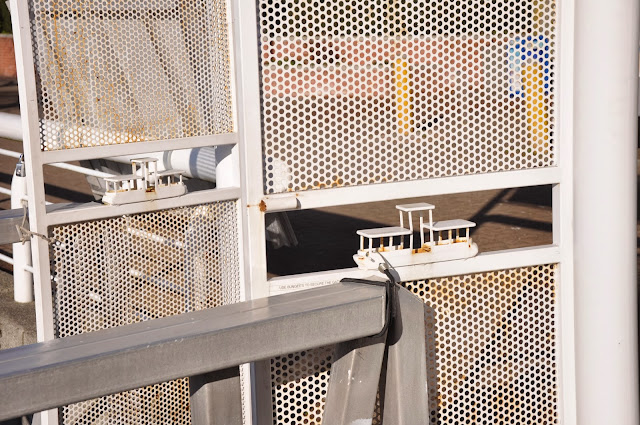 They are tiny and easy to miss in this zoomed-out view. 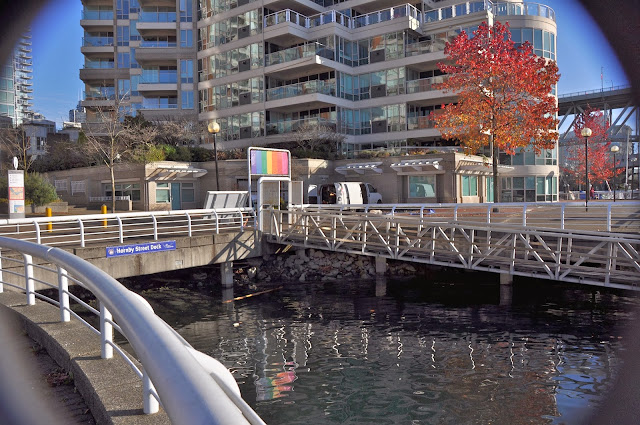 Can we make a closet organizer out of this driftwood? 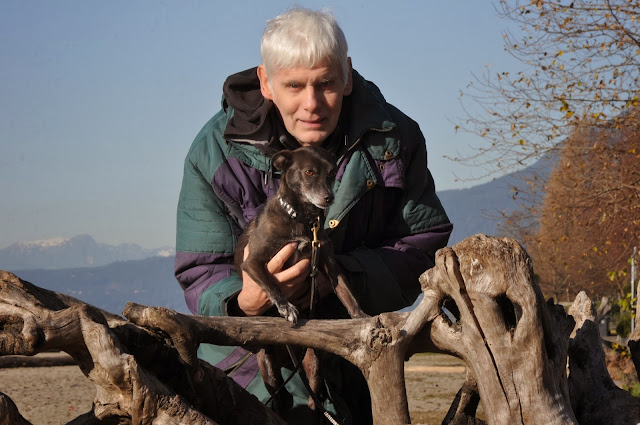 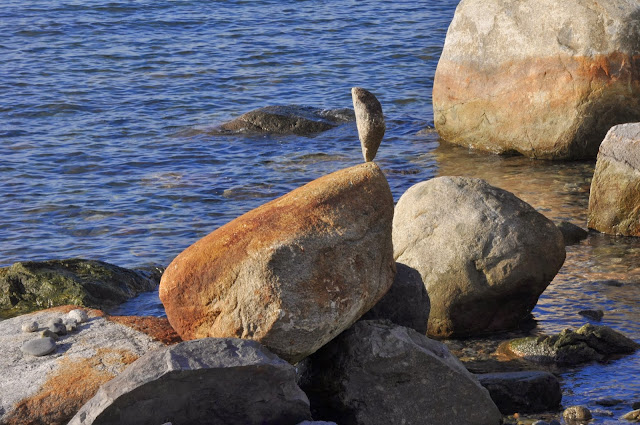 A gaggle of geese flew by.  I couldn't (and never can) resist trying to capture birds in action. 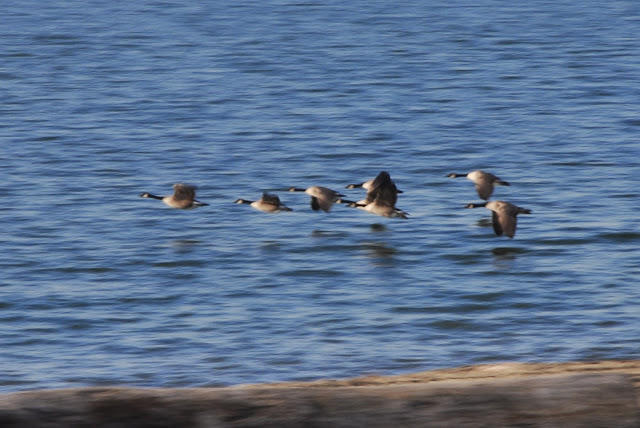 By the time we reached Davie and Denman, I was due a latte and blueberry square. 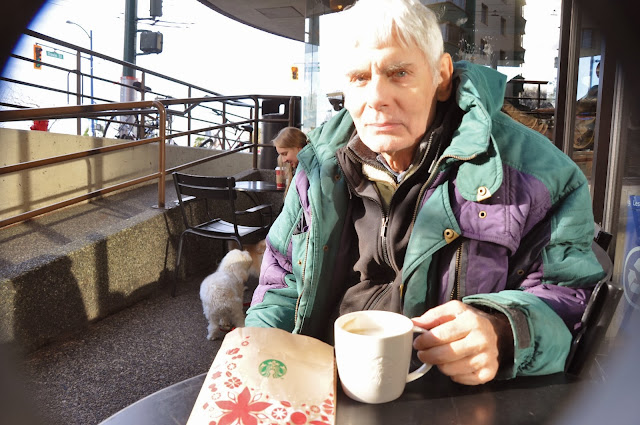 Carol finished her soy latte which is why she smiles.  Black Jack is eying crumbs on the ground. 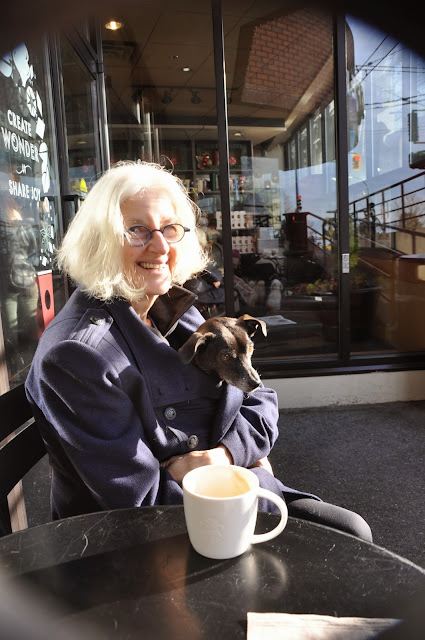 We were walking along Davie towards home when we encountered a complete stranger who said he was happy I was feeling better.  It turned out he had been reading Carol's blog since meeting her a couple of years ago.  He told us his name is Peter.  Just knowing that strangers are concerned about my health really made my day.  (Mine too!  Thanks for stopping to tell us that, Peter.  It was one of the highlights of our walk.) 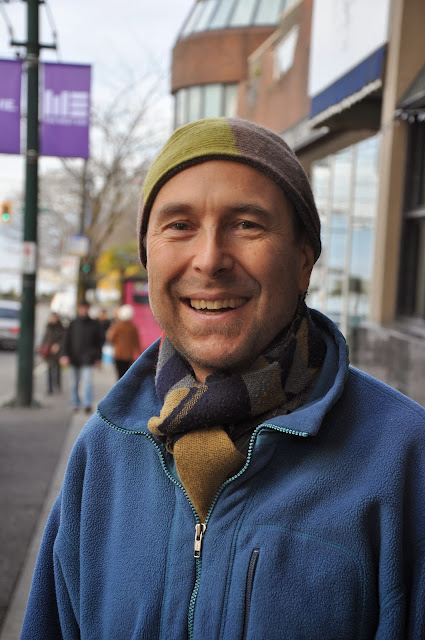 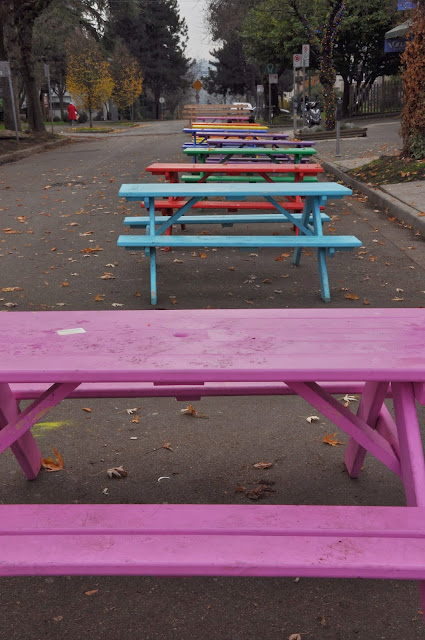 and that is a good thing. 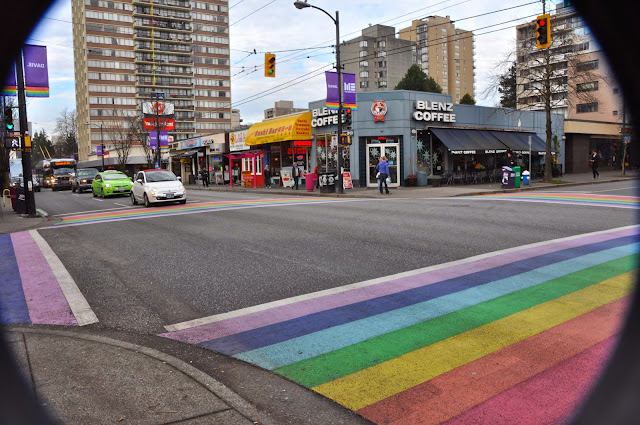 As we walked by Howe Street Fitness World, Carol suggested we check out the membership deals.  I must admit I was somewhat sceptical but Jyn and his alter ego, Superman, won me over. 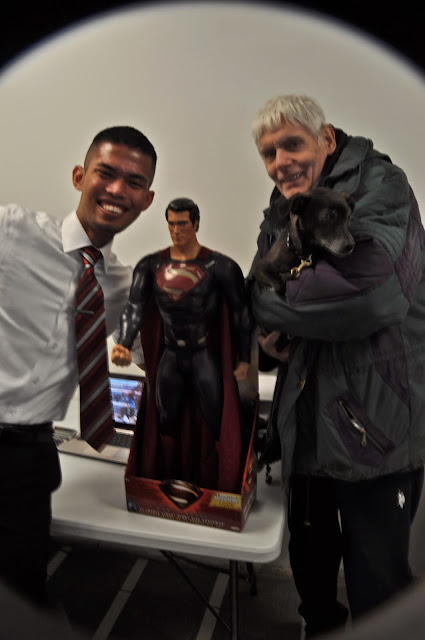 Walking along Davie, I looked across the street through fast moving traffic and caught glimpses of some skateboarders in Emery Barnes Park.  Bill watched in fascination along with me.  Check out the response of a mother and one of her two children,  The other child and the fellow reading seemed oblivious to the excitement the skateboarders (and I) felt. 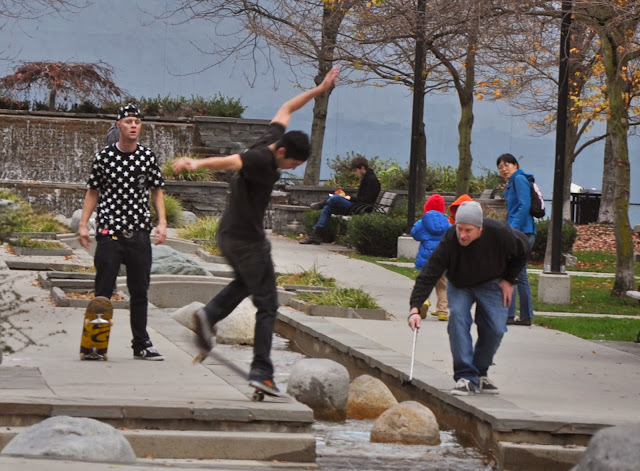 I only had my small lens, but was amazed that it was able to catch some fairly decent shots  from across the street and between the whizzing cars. 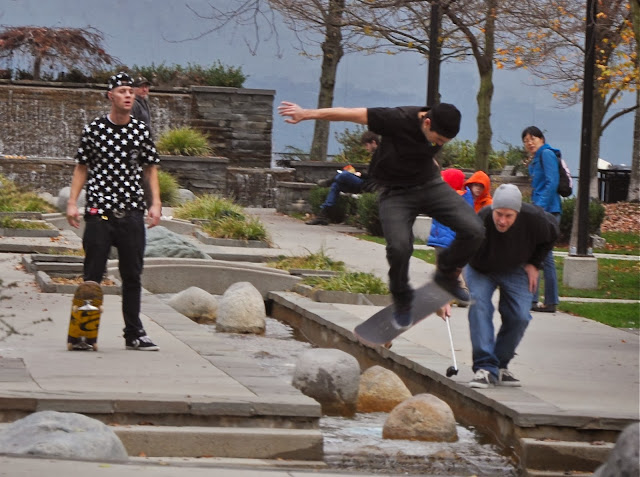 The traffic lights stopped the cars and helped me out with this shot.  I loved the focus, not only of the fellow doing the jump across the water, but also of his mates.  This was truly a group effort. 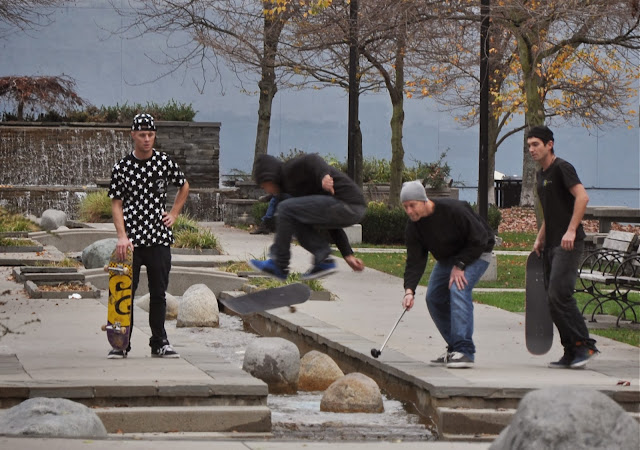 We attended a False Creek Residents Annual General Meeting with our MLA (Sam Sullivan) in attendance.  We both felt quite tired by about the half way point and decided to call it a day, but Bill talked at some length about his gratitude to people who put countless hours of time and effort into making living conditions better for all of us.  I learned a lot of new things from Sam Sullivan's talk.  For example, he said that people who live in high density neighbourhoods, as we do, have a far smaller footprint on the earth's resources.  He also talked about heritage buildings and the fact that some people put that priority over accessibility and even over the welfare of children in schools.  I do wonder, sometimes, that it seems so difficult to remain flexible and to set priorities within the limits of a good dose of common sense to keep things in perspective.  Anyhow, all to say it felt very worthwhile for us to have attended that meeting. 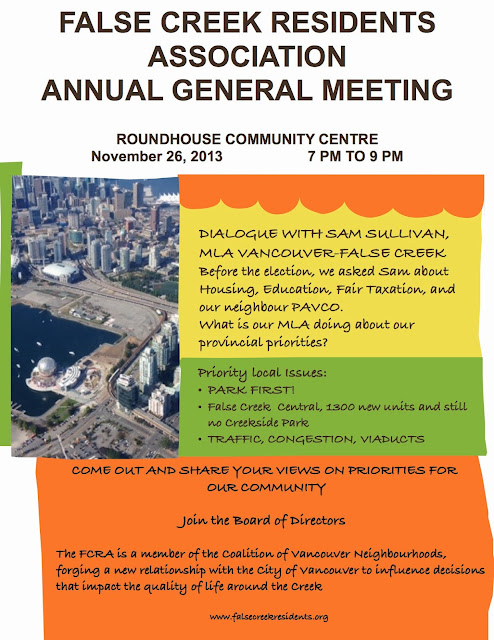 Today we were out and about for four hours during the day and another hour with Sam Sullivan.  I continue to be amazed by the progress Bill has made in just two weeks out of hospital and am so very proud of him.  Already, we have more to report today.  Stay tuned for that post.  For other posts celebrating the letter "T" do take a few moments to stop by ABC Wednesday!
Posted by Black Jack's Carol at 4:10 PM