I've realized because of TexWisGirl's Good Fences meme that one cannot move far in a city without encountering a fence.  Here are the ones we saw during the past three days, this first one after we had taken the Aquabus on Tuesday to Granville Island (a five-minute trip if we ride to the stop that accommodates our bikes).  You can see the fence on the Granville Bridge, the fences that border the ramp that we walked up, and the blue fence behind us as we sat listening to a busker. 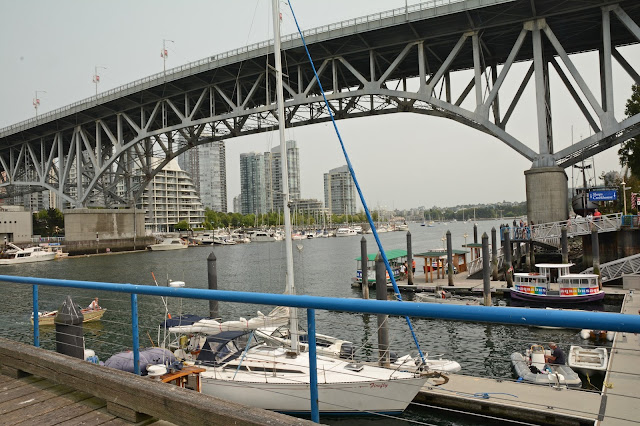 Here's a closer view of the ramps, the walkway leading to the marina, the stone walls that support the island, and the fences around the entertainment and shopping area. 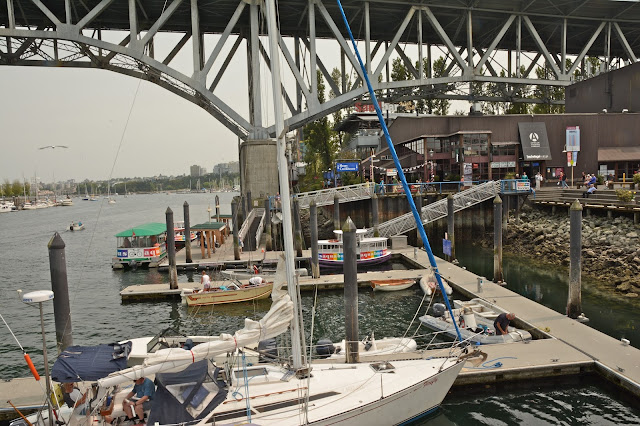 Here, the Aquabus heads back to the other side (it crosses back and forth every five minutes) with the Granville Bridge behind it and the fences bordering False Creek (our bike route) in the background at the left. 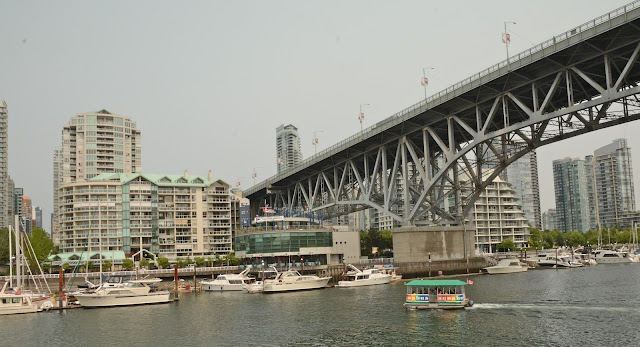 Coming in for the landing.

Bill and Black Jack watched as I returned after taking the photos.  There are a couple of pups that rode in that baby (pup) carriage.  I'm saving them for Eileen's critter post tomorrow. 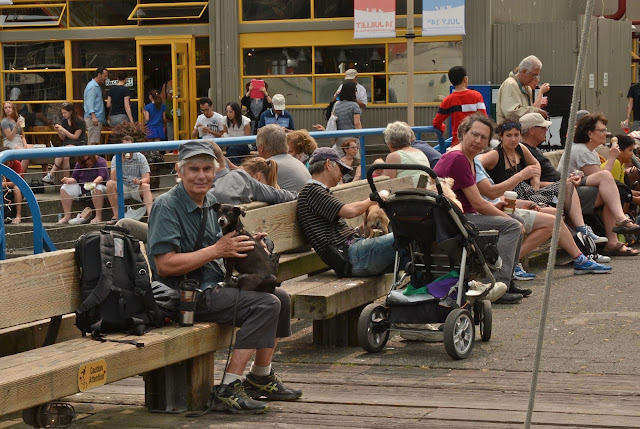 On Wednesday, we rode along the Coal Harbour bike route.  It was hot and the air was quite hazy because of the forest fires (posted about yesterday].  Bill headed for a shaded park bench to sit with Black Jack while I chased a butterfly with my camera (but never caught it). 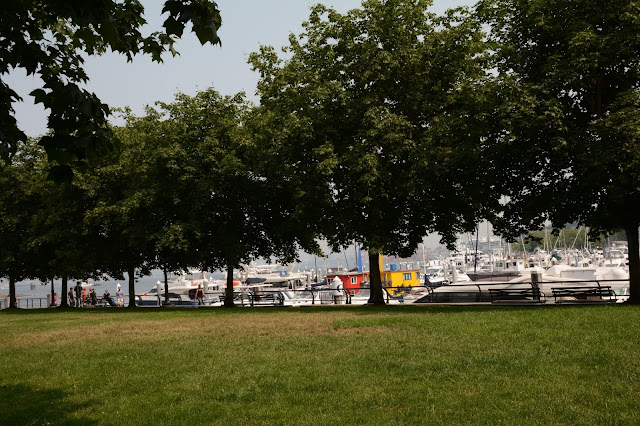 Joggers and walkers and cyclists all use designated paths in front of the fence.  You can see some colourful houseboats that actually look like boats.  One day, I'll show you a better view of them. 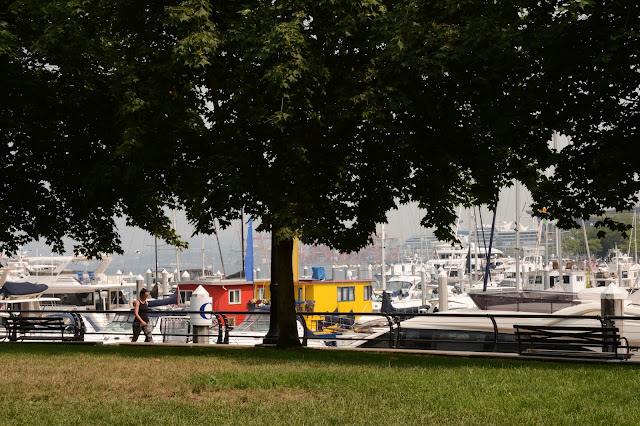 A line of trees is a sort of fence and was a good leaning spot for our bikes. 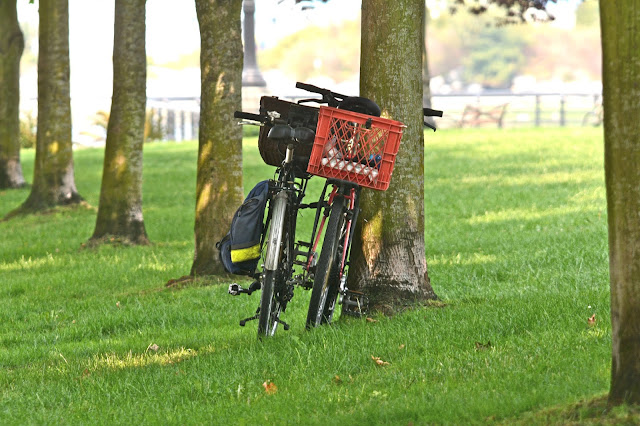 One of the fun things is returning to Bill and Black Jack with little.. 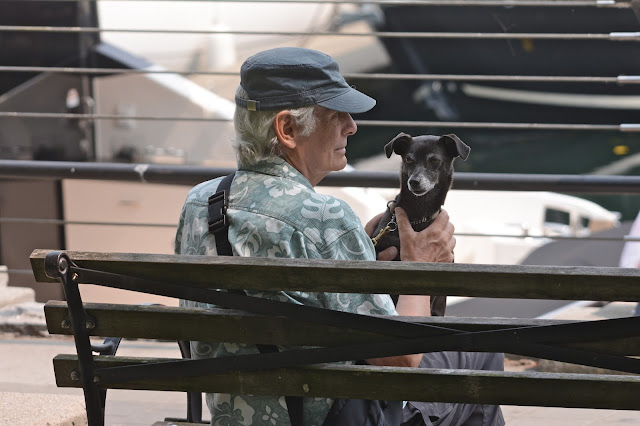 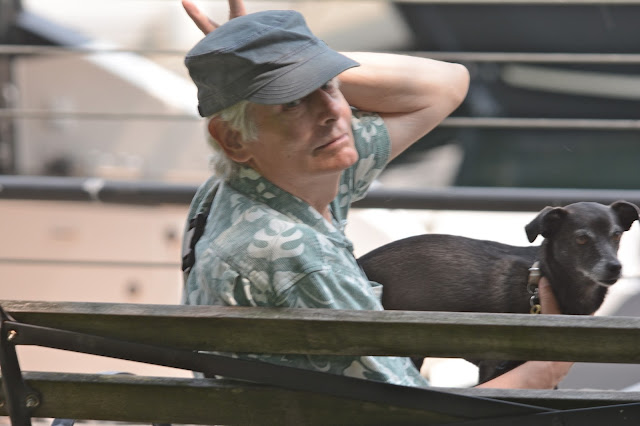 We've biked this area many times, but noticed something new..  a rocky ledge.. 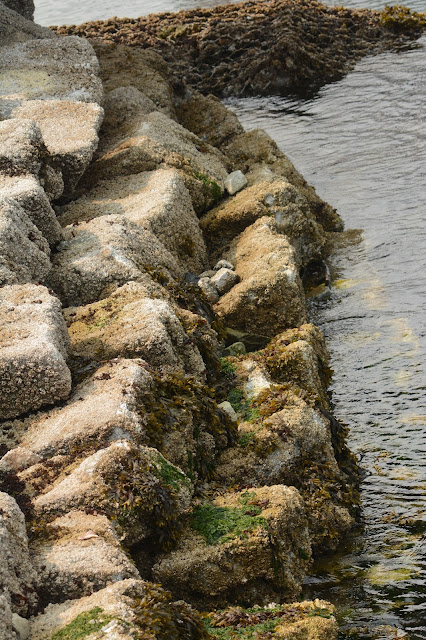 under a fence by the bike path.. 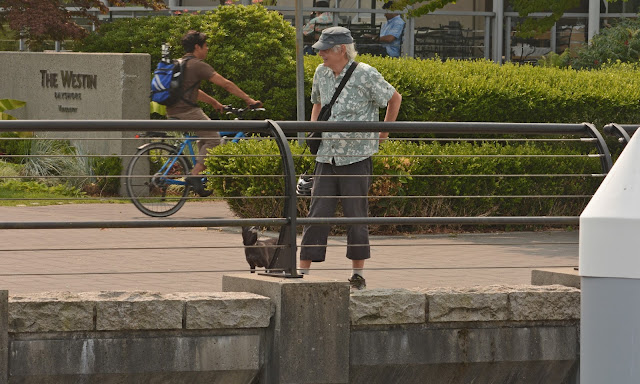 where I caught this shot of my two sweeties. 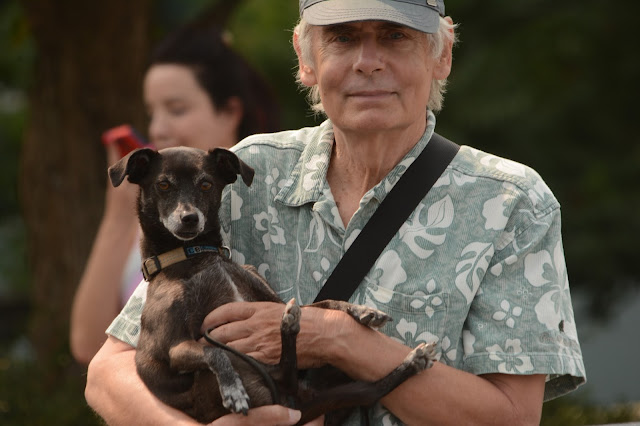 There is an amazing amount of activity with quite a few critters and sometimes, way too many bikes, but we are getting better and better at avoiding the tourists who wander off the walking path and into the cyclists' way. 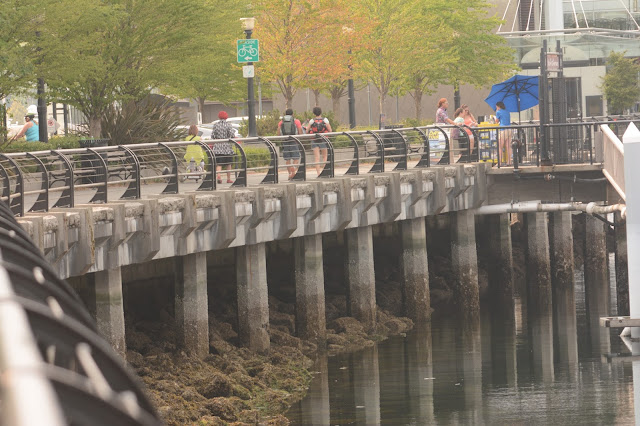 It was this circular jetty that we hadn't noticed before. 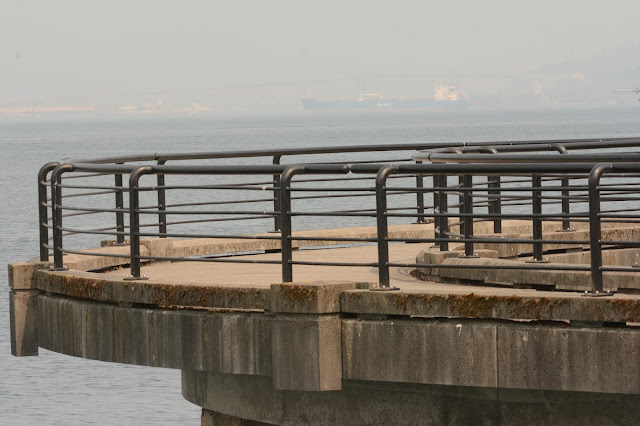 Our usual orange cranes showed up but you can see the haze behind them.

And finally, a couple of yesterday's fences in Olympic Village.  Yeah I know this is a (really neat) sculpture by Wade Baker but behind it is the fence of the Cambie Bridge. 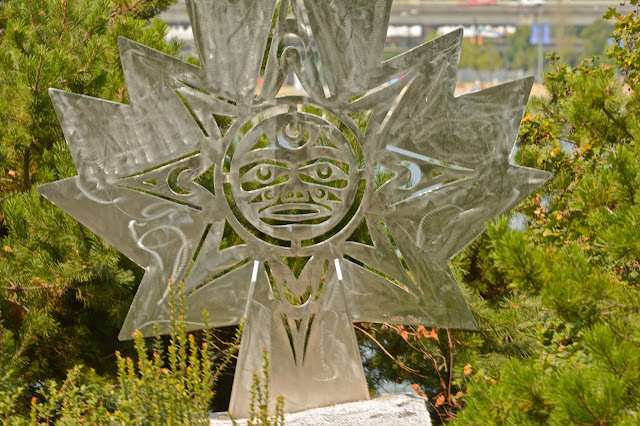 Yeah, I know it's a bit hard to see.  Here's a slightly larger image. 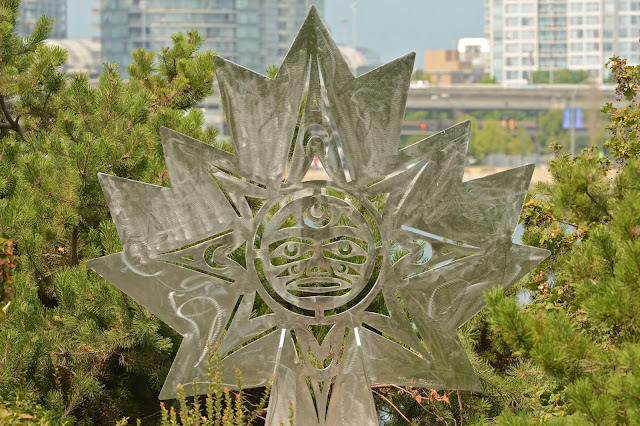 And still those cranes even though we are a few kilometres away from yesterday's location.  And yes, that's still quite a hazy sky.  If you look really, really hard, you might see the outline of the North Shore Mountains.  In normal conditions, they are clearly viewed from here. 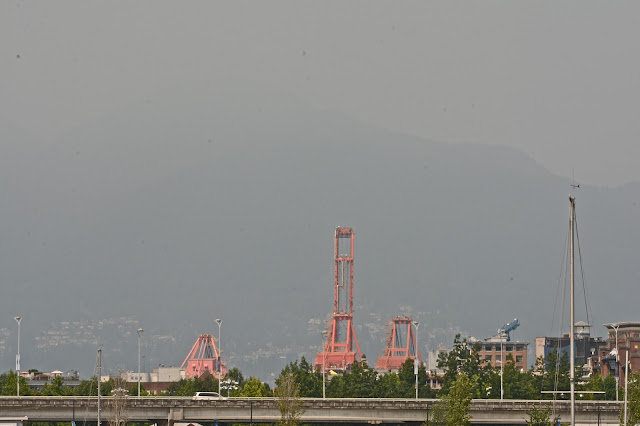 On the way home, we stopped to rest for a moment.  There's my sweetie sitting on a stump this time.  Isn't he adorable?  By the way, there's a fence behind him. 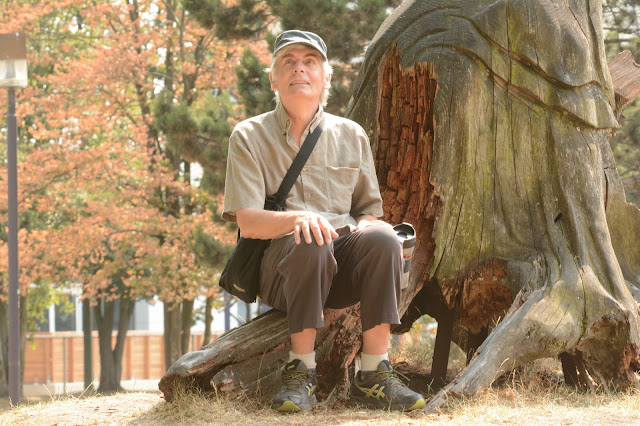 Last one is as we walked up to Harrison Galleries.  So much construction and so many fences, but what I loved here is the camaraderie of the workers who appeared to be finishing their day.  Dressed in heavy work gear on one of the hottest and most humid days of the year, we were really impressed to see their (Bill told me to write "sweat" here) smiles.  That's it for today.  We're leaving right now for today's outing.  Thanks TexWis for your wonderful meme! Until next time. 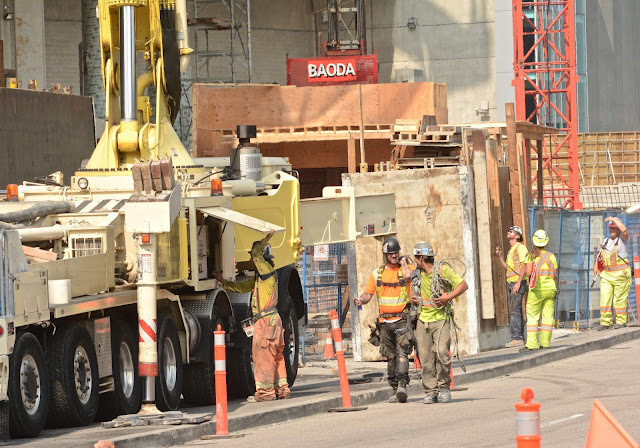