I haven't posted photos highlighting the colour blue for a while, but several came up in our recent excursions, and I thought of Smiling Sally's Blue Monday meme.

ArtStarts, as described in my last post, and viewed on July 18th, links professional artists with elementary and high school students, with the goal of helping them to express their dreams for, and impressions of, their worlds.

These beautiful clay bowls with subtle blues in each one.. 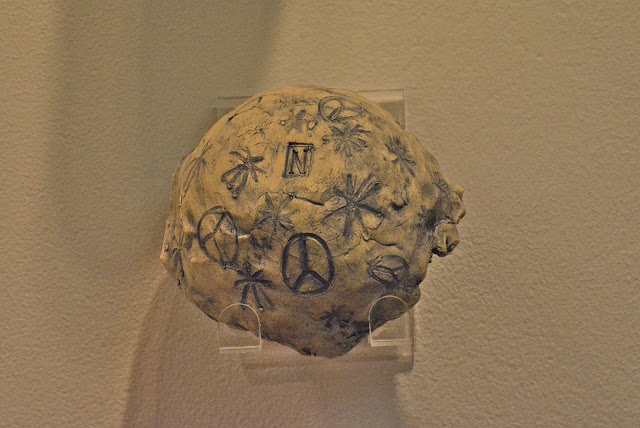 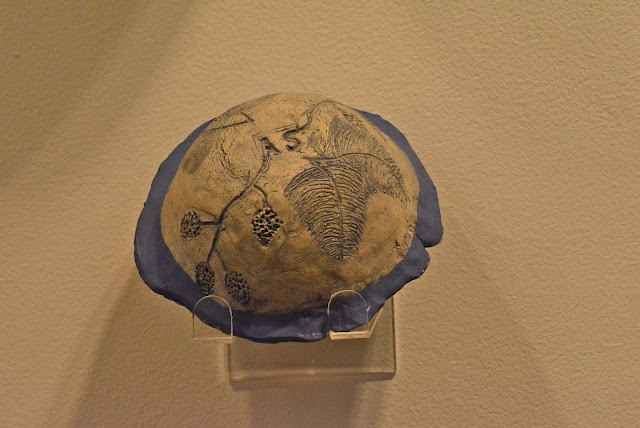 and some that helped build a school the students are supporting in Africa. 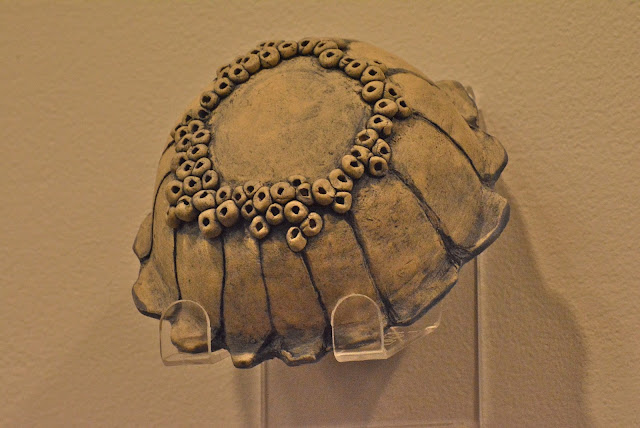 As explained below, that project grew from reading the folk tale, Stone Soup. 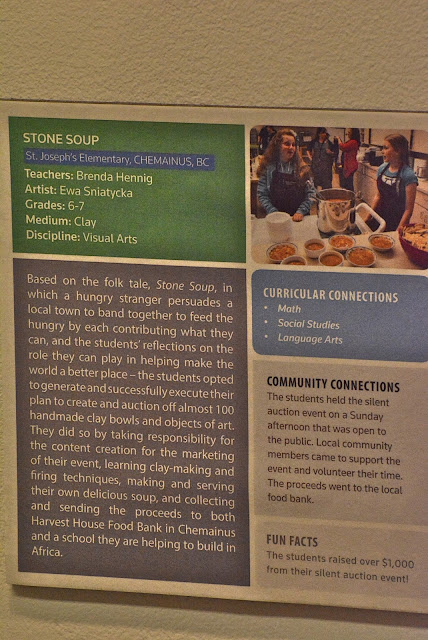 There's my dear Bill and Black Jack sitting in the beautiful space where we were privileged to view quite a variety of spectacular art by young people. 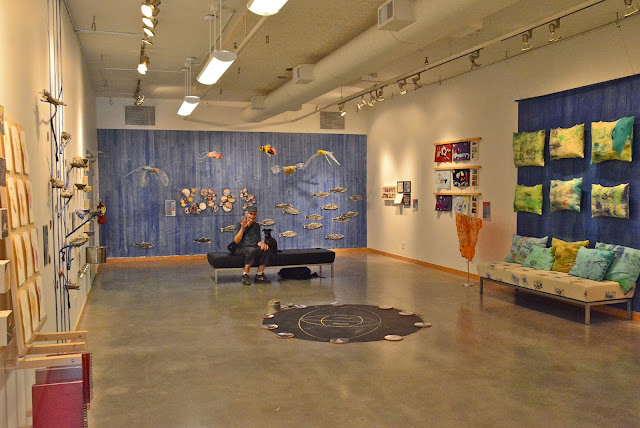 That evening, as the sun set, my camera caught the last remnants of blue in the sky over the Granville Bridge. 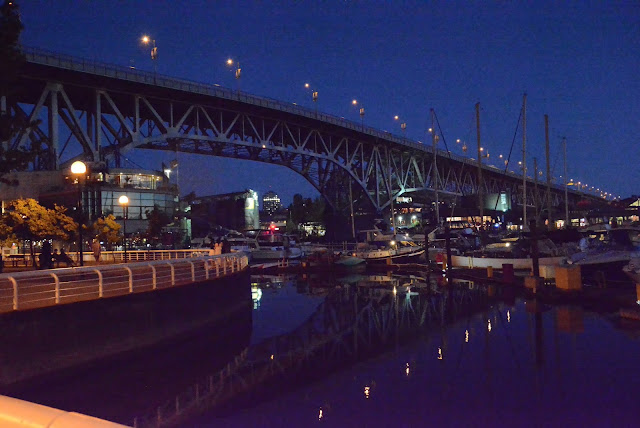 The next day, July 19th, we were in Olympic Village Park and I loved the wispy clouds over the stadium. 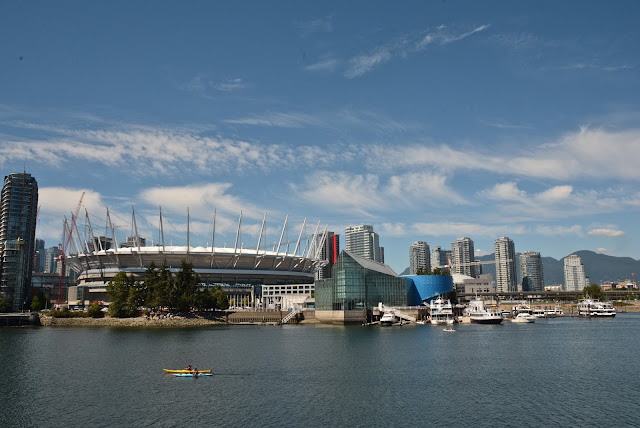 I think it was the day after that, that we saw these wonderful hydrangeas in Stanley Park.  I know Smiling Sally's father grew hydrangeas;  I always think.. 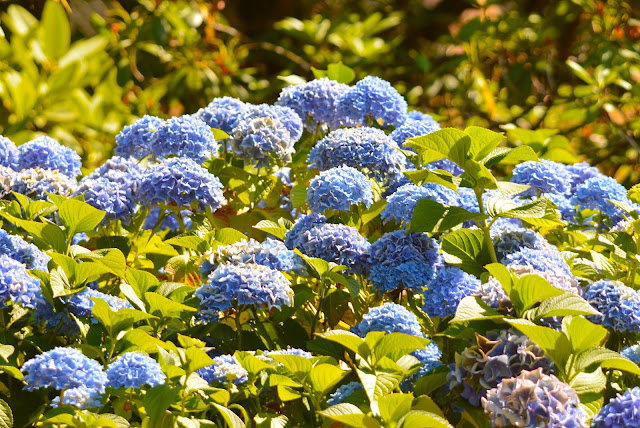 of her and her father when I see some particularly lovely ones. 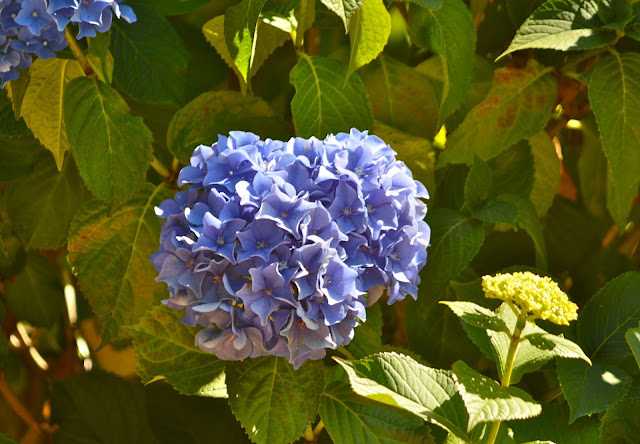 And, yesterday, Sunday, July 26th, was a wonderful day for smiles and for some blue hues too.  This painting, Tuscany, by H.M.Saffer, was at Harrison Galleries, where we did a crossword and enjoyed some treats before heading to.. 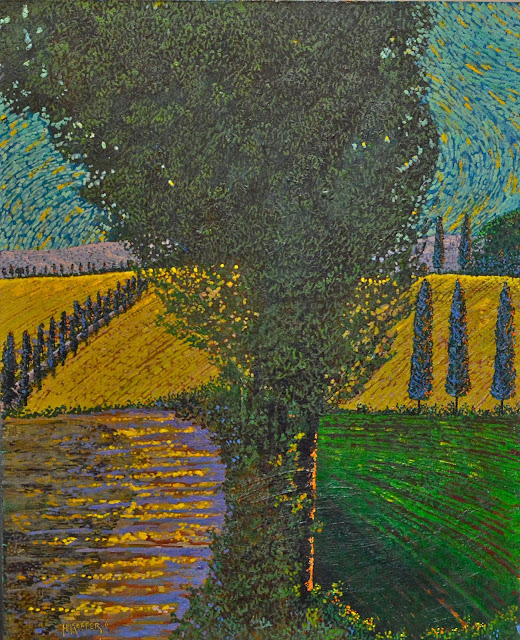 the Jazz Vespers concert at St. Andrew's Wesley.  On the way, we were excited to see that the Keys2Streets program has been reinstated in Vancouver.  There was no time to play much of a tune but Bill did his Jerry Lee Louis imitation most convincingly, I thought. 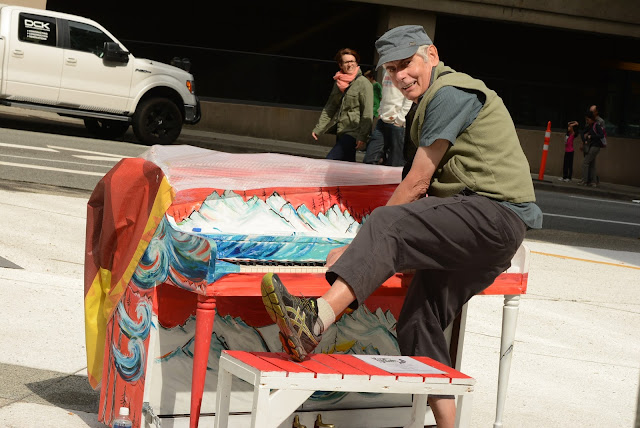 The pianos have been painted by local artists.  Isn't this one lovely? 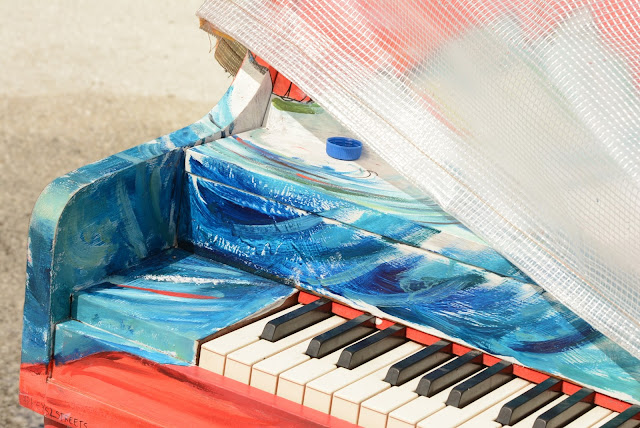 You can read a little about that program here. 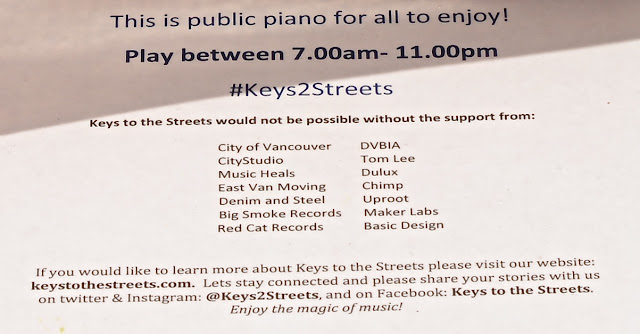 Just as we were putting the rain cover back, this gentleman with a blue shirt came along.  So good to see the piano being enjoyed. 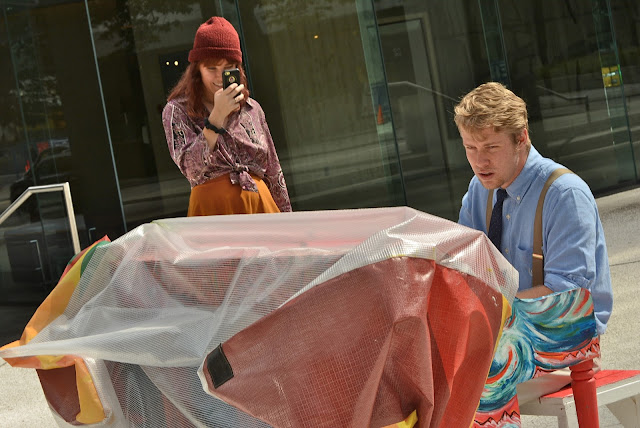 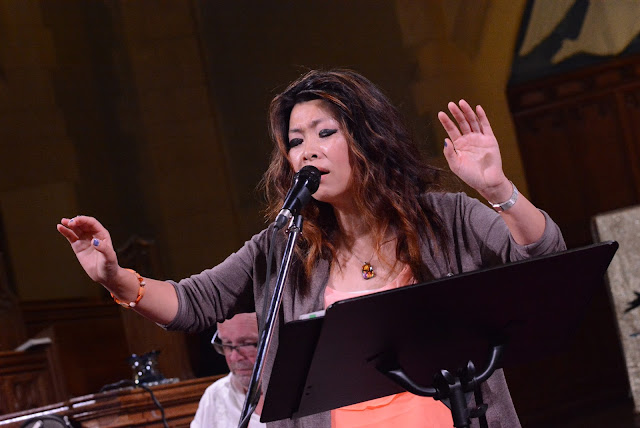 including "Smile" by Charlie Chaplin, John Turner and Geoffrey Parsons.  Here, she points out the upward motion required to form a smile. 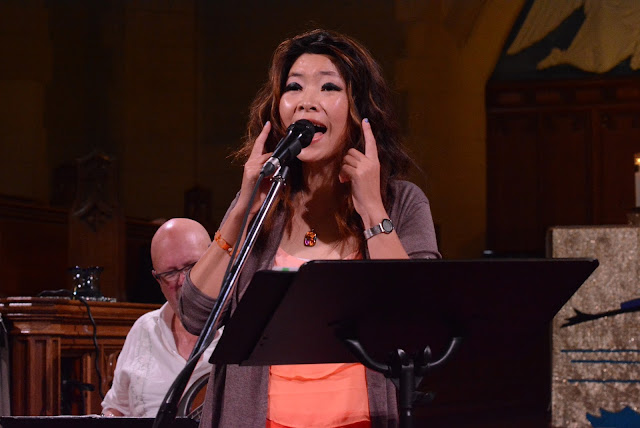 Everyone, including her very fine back-up musicians, was smiling by the end. 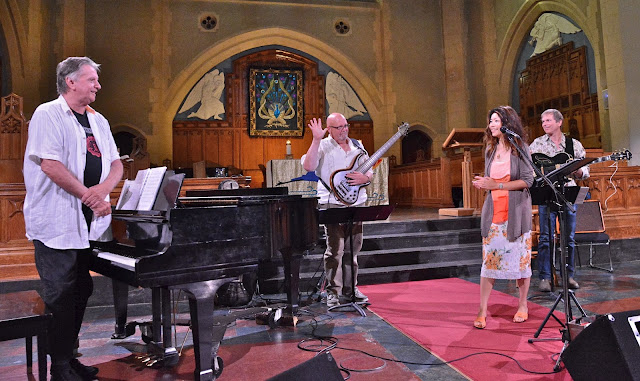 Blue is featured quite a bit at St. Andrew's.. 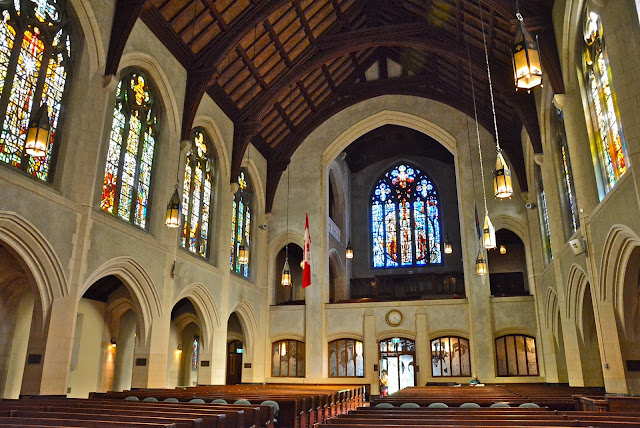 and one more smile that makes my day! 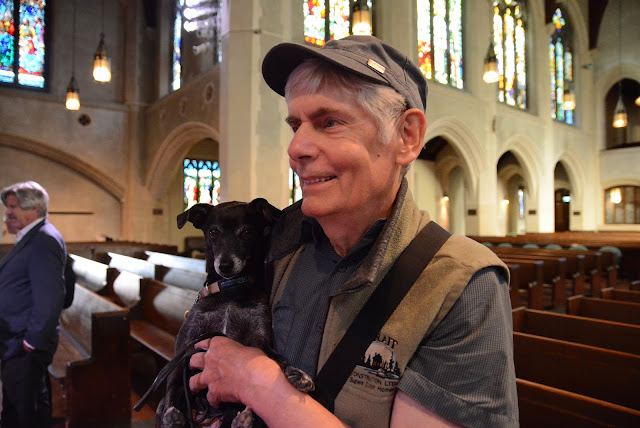 When we left the church, the sun had come out after the morning rain, and.. 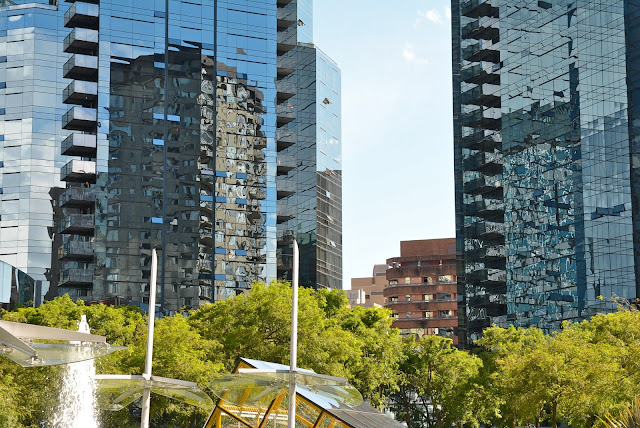 reflections in the buildings across from the church were impossible to ignore. 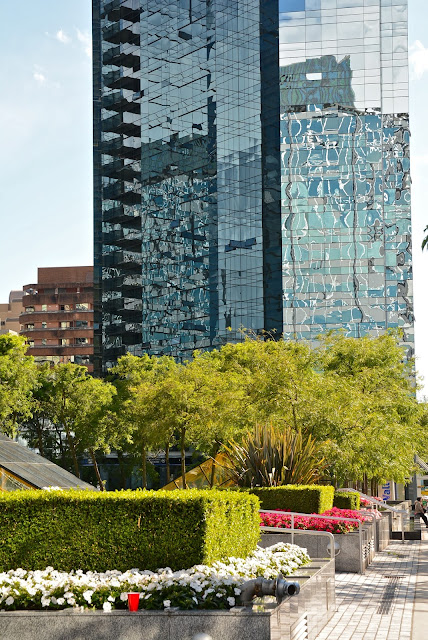 We stopped on the way home to admire some talented skateboarders in a local park.  Note this fellow's blue shoes and the smiling baby behind him. 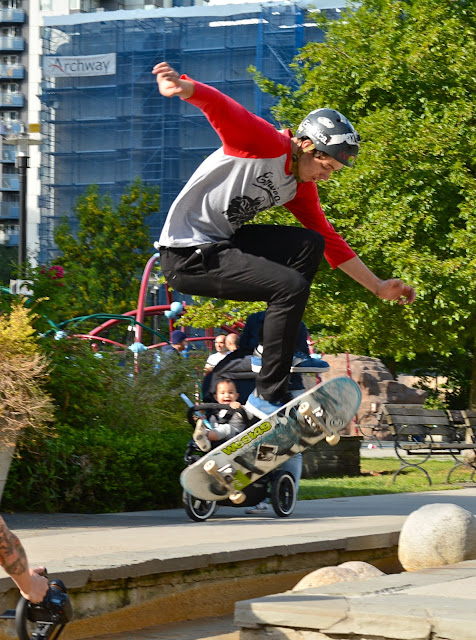 There was a blue streak :) in this fellow's skateboard.  Really nice fellows!  They had no problem at all with my taking photos. 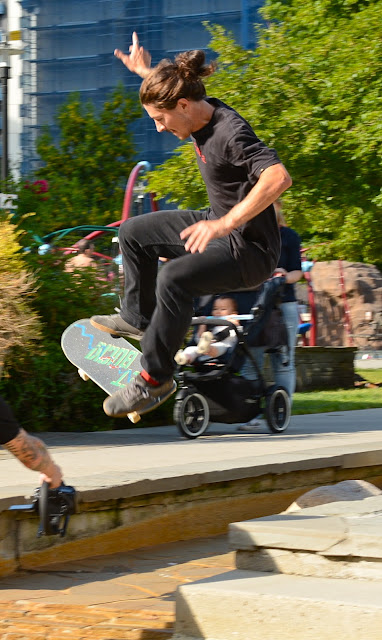 Here's Judy Garland singing "Smile" just in case you have the time to listen.  In the mean time, many thanks to Smiling Sally for her wonderful meme.  I hope each one of you has found a few smiles on this Blue Monday.  :)