Art and Assistance for ABC Wednesday

The letter "A" will be featured in this 11th round of alphabet ideas for  ABC Wednesday.  I joined at letter "O" of the last round and have found it so amusing and so absorbing, I hope this time to go through the entire array of letters, accommodating at least one artistic theme per post.  This particular post will jump around a bit from art to assistance and back again to art.

Over the past week, I was surprised to find two "A" shapes in Vancouver's public art.  The photo below zooms in on a tiny section of a sculpture located near Sunset Beach.  It is called "Engagement" and is by Dennis Oppenheim.  You can follow the above link to see a photo of the entire piece, and  this link will give you a very interesting interpretation of its meaning. 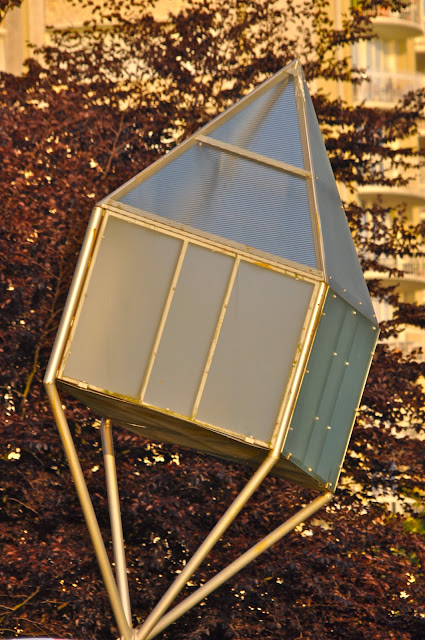 Just a bit further along the beach, the second "A" showed up, this time in the form of an  Inuksuk. 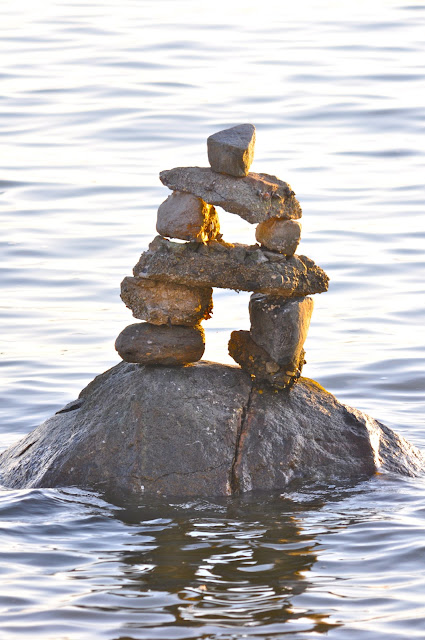 The idea of lending assistance really struck home yesterday, after coming across a beautiful example of human kindness. 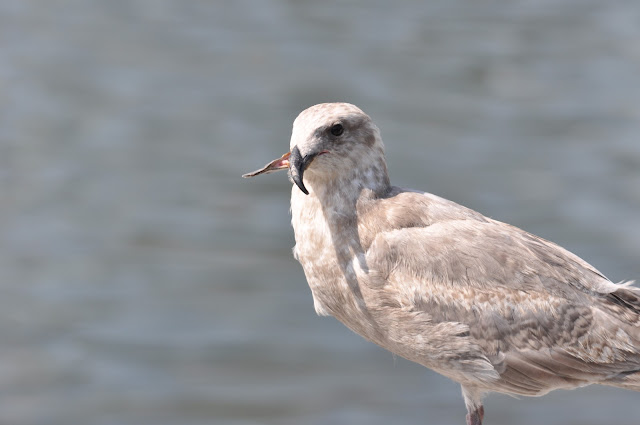 Black Jack and I were enjoying a pleasant walk around the False Creek seawall, and had just arrived at the pond where seagulls congregate for bath time, when the words, "Here he is.." floated past my ears.  I stopped, looked back, and saw a lady and little girl.  They were throwing food to a seagull, not an unusual sight in Vancouver.  But, on looking a bit closer, I realized that the seagull's bill was deformed.  The lady told me that the bird has been named "Twister" by the children at a nearby school.  She also told me that he isn't very comfortable with dogs, so we continued on our walk, not wanting to cause Twister any unnecessary stress. 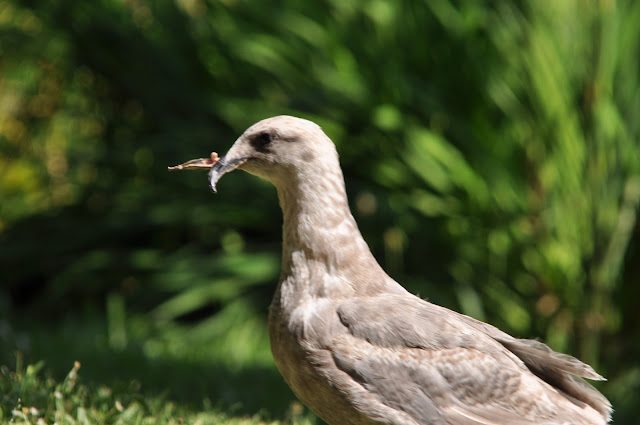 A few minutes later, further along the seawall, Twister caught up with us.  Black Jack is not interested in birds, and it seemed to me, Twister recognized that, as he landed quite close to us. I guessed that he is still in his first year of life, since he has not yet gained the white plumage of an adult. A minute or so after he landed, the lady and girl also caught up, and they threw a second helping of food to him. "He's so hungry today," commented the woman.  "What do you feed him?" I asked.  I was really happy to hear her response: "Oh, just some snappers and kidney beans," she said. She added that they also bring along some oatmeal for the times when other seagulls try to catch the food ahead of Twister.  The oatmeal keeps them busy while Twister gets the fish and beans.  I don't know how Twister's bill came to be so deformed, but he sure is fortunate to have found the perfect people to assist him. Not only are they determined that he will live in the wild, but this regular source of nutritious food will give him a great chance at a full life.

When I looked up "assist" at an online dictionary, this anonymous quote popped up:

Perhaps, in some small way, telling the story may assist the lady and young girl, or perhaps there is a reader here who will pass along the kindness to other wildlife facing unusual challenges.  I know I will be watching out for Twister and for the lady.  Perhaps, it will be possible to contribute to the cost of Twister's food, or maybe I will be able to give them the occasional break from their self-imposed duties by taking over Twister's feedings from time to time.
ARTIST: GEORGE ALDRICH
Combining the Art and Assistance themes, here's another little story.  I thought it might be interesting to research artists whose name begins with the letter of the week.  Better still, I thought, if I could find artists whom I hadn't heard of before.  A quick google took me to George Aldrich and a painting called, "The Melting Pot, Chicago."  I also found some interesting information about Aldrich.
This comment was on a discussion board and describes Aldrich's challenge to afford a place to live and proper art materials.  Like Twister, Aldrich was fortunate to come across someone who gave him a helping hand.


"My great uncle ( Richard van Allard) let Aldrich stay in one of his apt. buildings in Chicago in exchange for paintings, as he could not afford rent. I have one I grew up viewing in my home outside of Chicago, which I love. It is a beautiful scene of a stone cottage on a stream, with a woman working in the garden. We had several; I especially remember a charming water mill scene that my parents gave to some friends. I had the painting restored about 15 years ago, and it was well worth it. It will need another restoration soon as I live in a dry climate now. I was glad to find this site on line, hadn't seen it before, as I have wondered about the artist throughout the years. It makes sense that he often couldn't afford good materials, and perhaps this is why my painting looks like it will need more sprucing up soon. If anyone else has any more information, I'd be interested in hearing. Thanks, vhc"

Now, for what i think is an amazing fact.  In trying to find a bit more information about Aldrich, I found not one but two contemporary artists with the same family name.  As far as I can tell, they are not related.  Here they are:

EDWARD ALDRICH
Edward Aldrich does oil paintings of wildlife and has published the book that you see below.  His works hang in several art galleries in Canada, the U.S. and England.  I believe he would be in his mid-forties now.  You can read more details about his life at this link. 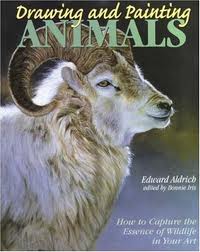 RICHARD ALDRICH
Richard Aldrich, born in 1975, lives and works in Brooklyn, New York. This site, where I found the painting below, will give you more information about his life and art.  I am still blown away to have found three artists for one post, not only all with the letter A, but with the same family name. 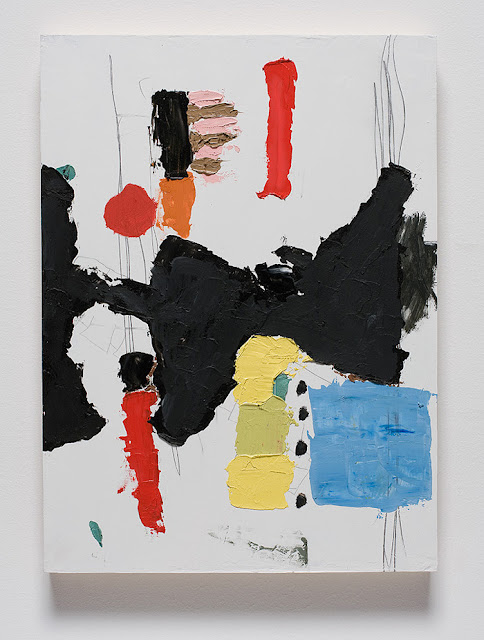 Just to carry the art theme a little further, Bill and I have found pleasure in Vancouver Art Gallery's Tuesday evening "pay what you can" exhibits.  Last night, we learned a whole lot about Henri Matisse and the Cone sisters who bought and treasured so much of his work.  I will save that for either a "C" or an "M" post, but in the meantime, here is a photo of Bill showing his appreciation for a lovely piece of public art that sits within site of Vancouver Art Gallery.

Last but not least, I leave you with a recording of "Wild Nights" from "Harmonium" by John Adams.  One of my goals was to learn about the life and work of composers who had escaped my notice previously, and John Adams is one of those people. I found his name in a book called, "1,000 Recordings to Hear Before You Die."  He is just 8 days younger than I am, and I can only say that as embarrassing as it is to admit I didn't know of him (I taught music), the one advantage to that ignorance is the pleasure that is in store for me as I explore his work. It will take 12 minutes of your time (so I do understand if you decide to save it for another day), but is well worth the time investment. At the beginning, you may think the link is not working, as it is so quiet as to be almost inaudible.  However, it builds to a feverish pitch, and the more I listen to it, the more the San Francisco Symphony and Chorus excite my admiration.  It was inspired by a poem by Emily Dickinson that, as this site discusses, shocked some of the people of her time:
Wild Nights, Wild Nights
Wild night! Wild nights!
Were I with thee,
Wild nights should be
Our luxury!
Futile the winds
To a heart in port,
Done with the compass,
Done with the chart,
Rowing in Eden!
Ah! The sea!
Might I but moor
Tonight in thee!

There you have my "A" post, a much longer one than anticipated, but great fun to work on.  To read Roger's clever "A" references (he is the new meme administrator, ably filling in the very large shoes of the much appreciated and acclaimed Mrs. Denise Nesbitt), and to learn about other "A" ideas from bloggers across the world, do check out the ABC Wednesday web site.  Until next week!