Vancouver is enjoying its 3rd day of real summer.  Already, last Monday's grey skies seem like forever ago.  The mist, viewed through an archway under the Burrard Bridge, had a hazy enchantment of its own. 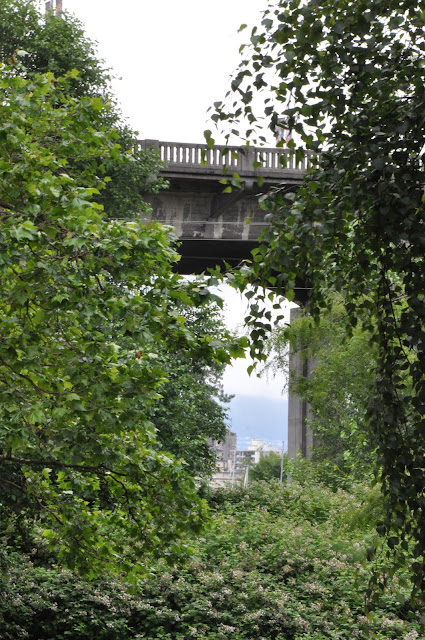 On Wednesday, just before we left for an adventure day, I stood in front of my apartment building, blue skies over David Lam Park.. 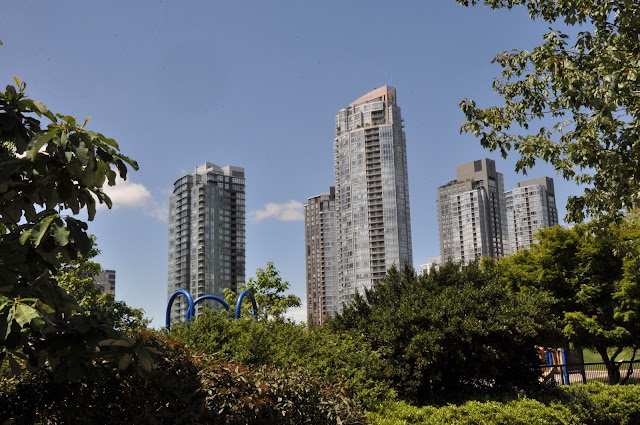 and over The Roundhouse, sending a jolt of "happy" through me. 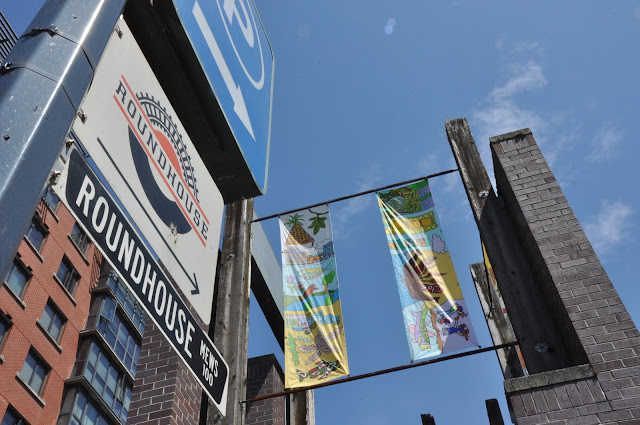 It was a first ever visit to Rocky Point Park in Port Moody. 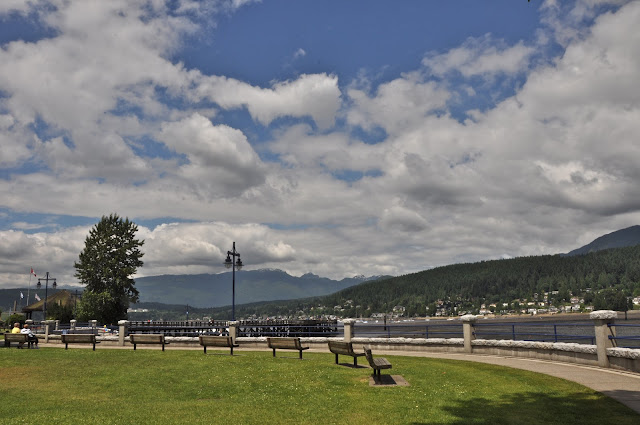 The pier stretched out over a low-tide vista that seemed as if it would never reach the ocean. 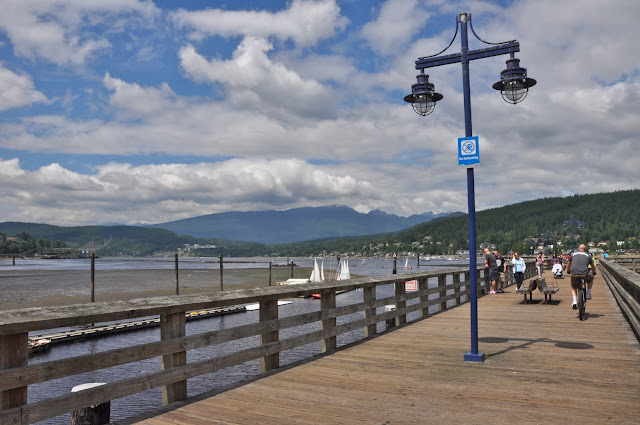 More about our wildlife sightings in the next post, but for now, skipping ahead to the wispy clouds that took over the skies a couple of hours later, 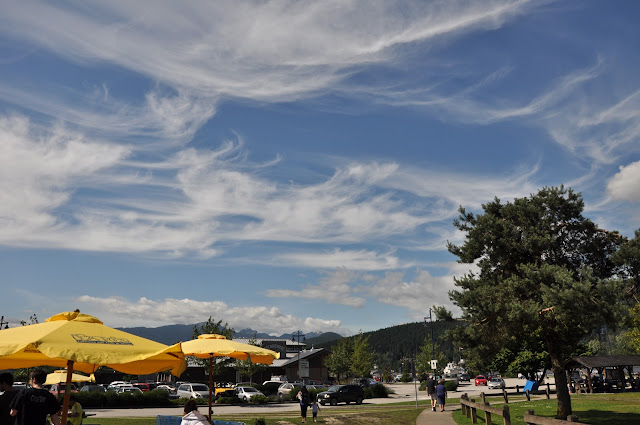 making a lovely backdrop for the flower-flag. 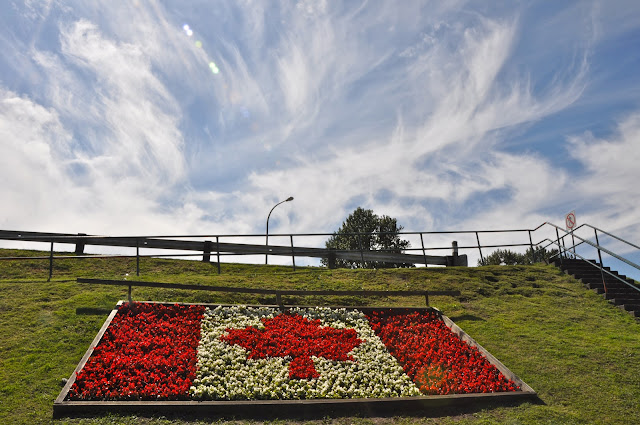 A couple of "truck-sky-shots" recorded.. 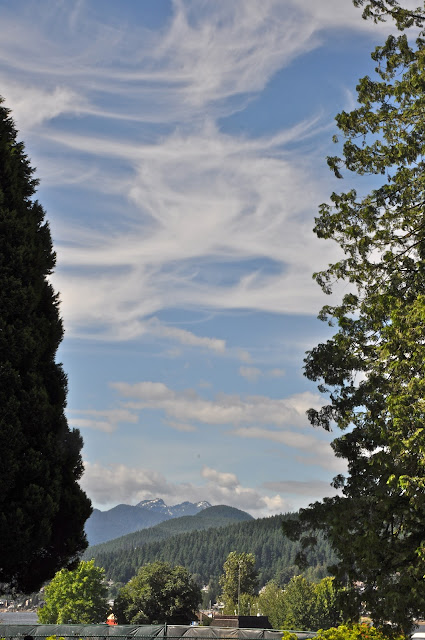 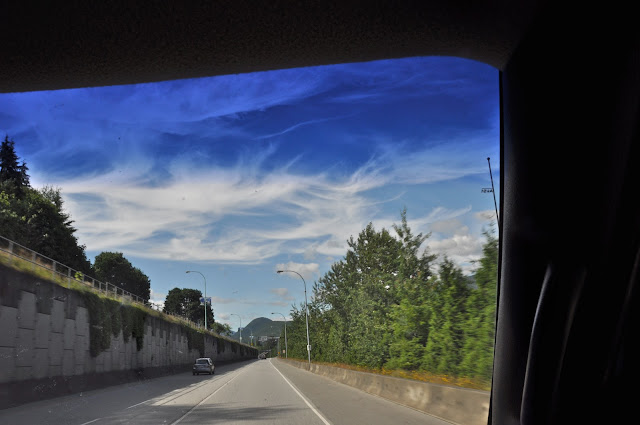 Back in Vancouver, another truck-shot caught this mural that neither of us had seen before. 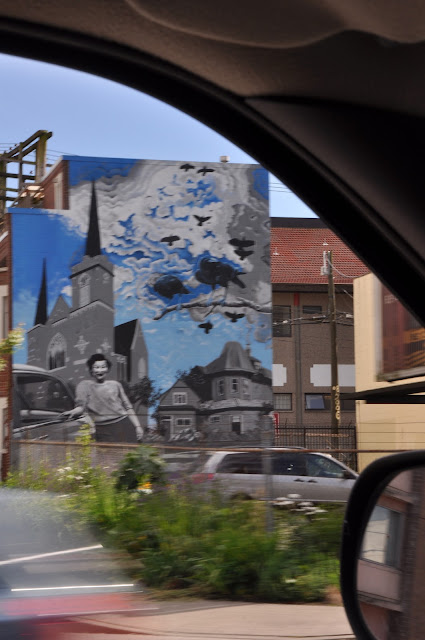 Bill stopped for this one.  We had spotted it on the way out of the city, and he remembered that we had said we should take a better look at it on the way back. 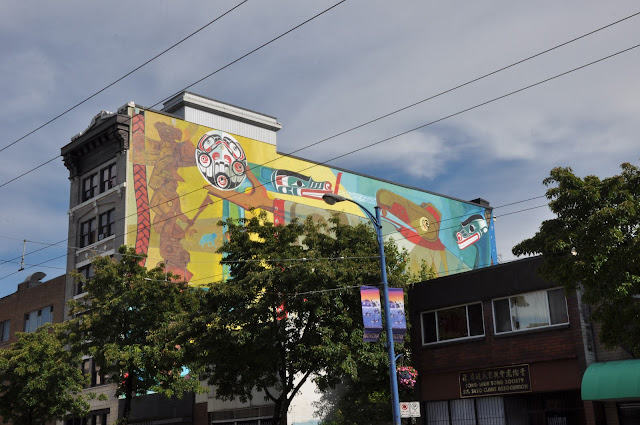 It turned out to be tricky to photograph.  I would have had to climb up that middle building to see it straight on. 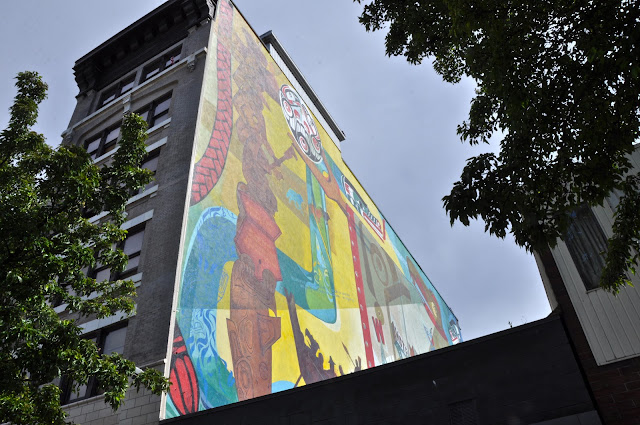 A fun memory of coming back to the truck, 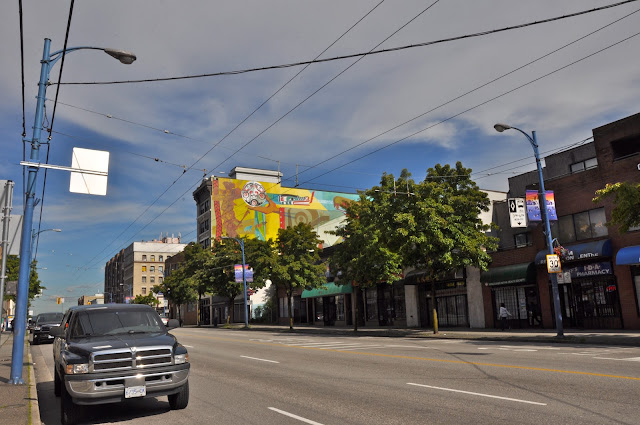 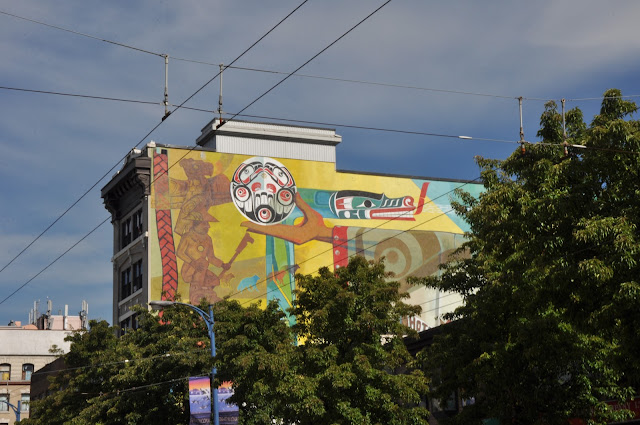 and then attempting to get smiling Bill and little Miss "I-hope-you're going to give-me-a-treat" Black Jack behind a windshield dark with sunlight. 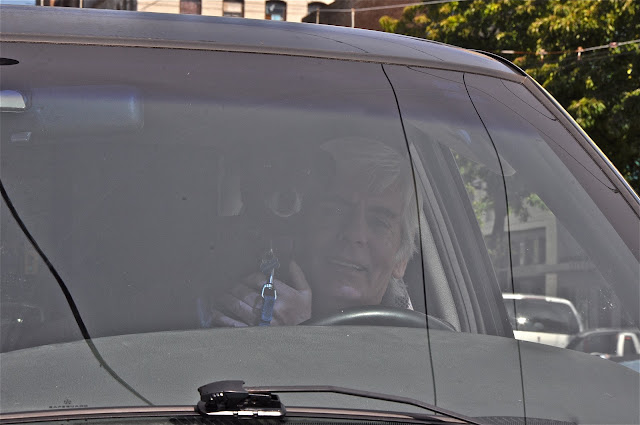 I have just come back to do an edit, adding the next 5 photos of Wednesday evening's walk.  First is an unusually high tide along the False Creek walkway.  Normally, there are three deep steps that can be seen on the left, but the water has come right up onto the walkway. 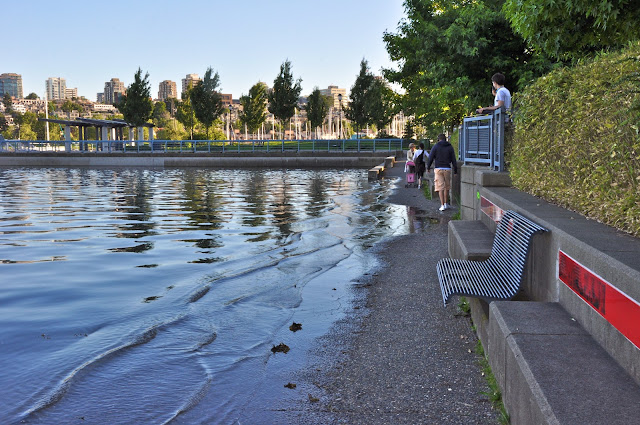 Blue skies and sails in front of the Granville Bridge. 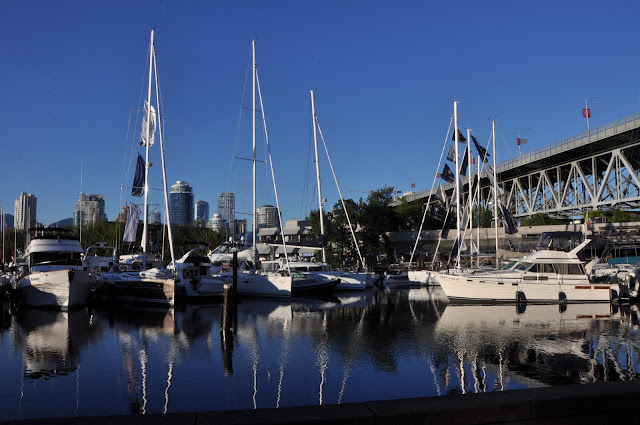 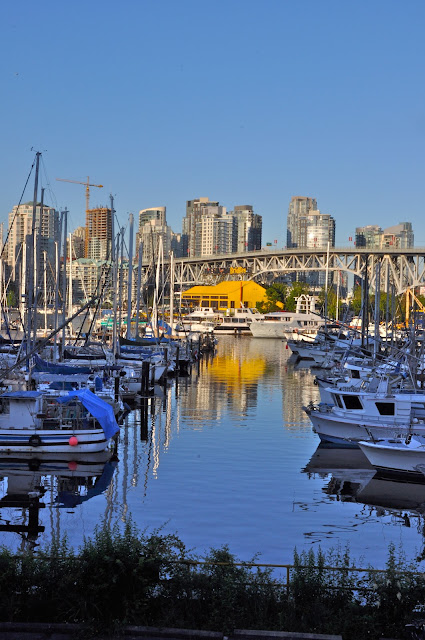 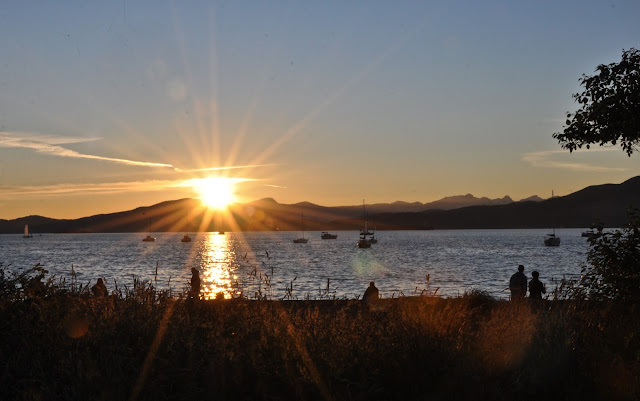 Lots of lovers and friends sat for a few moments, celebrating what many said was the first day of Summer. 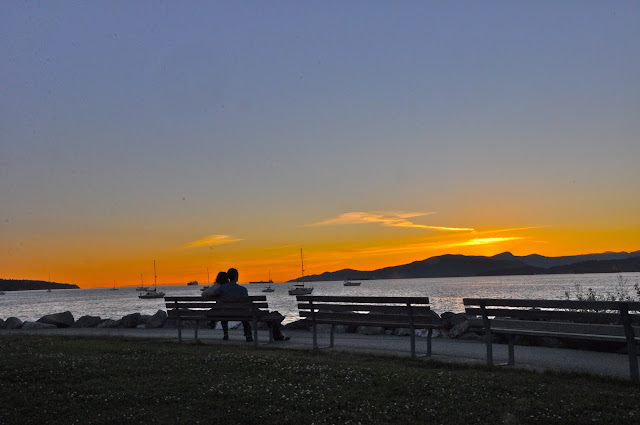 On Thursday, we walked to The Orpheum for a tour of its secret spaces (more in the next post).  On the way, blue skies and this glass building seemed to have done a colour match. 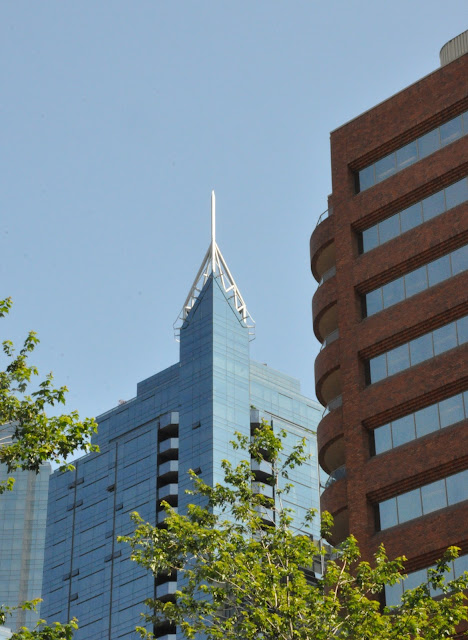 It was a challenge to convey what we were seeing.  Funny how sometimes, the camera shows things to be more beautiful than the naked eye sees them, and at other times, falls a bit short of the original view. 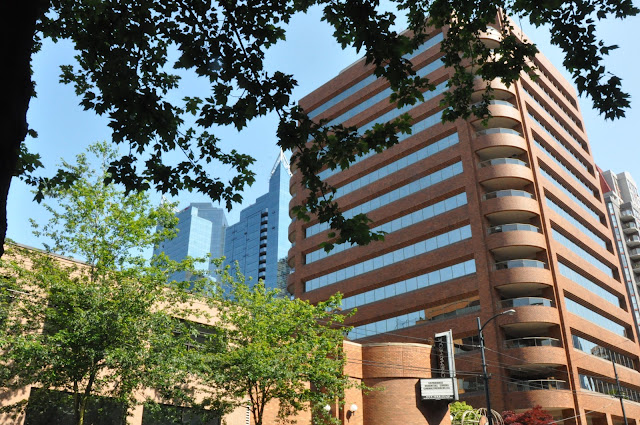 Yesterday, there were bright blue sky reflections between the branches and greenery of Lost Lagoon, 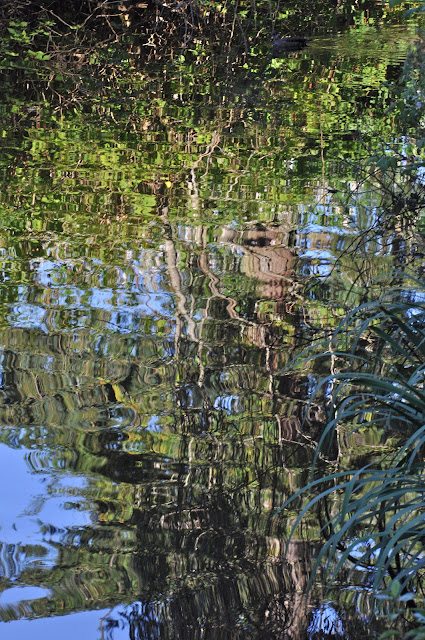 and a heron flew under a cloudless sky for my last photo of the day. 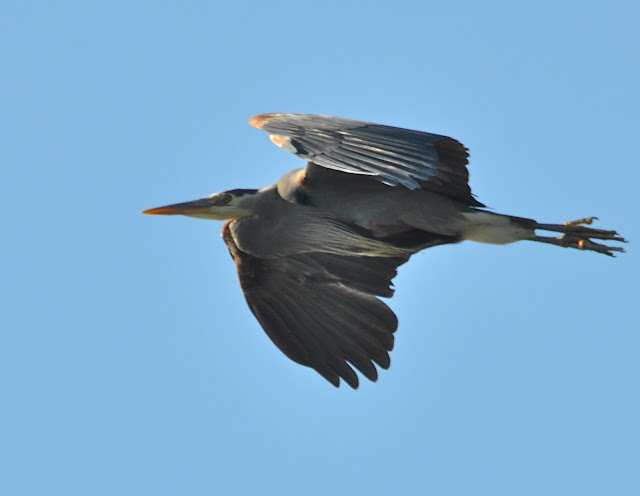 Thanks for checking out my sky photos, everyone.  For more magnificent skies from around the world, do take a few moments to stop by Friday Skywatch.  It is week 52 of its 5th year of sky posts, quite an achievement.  I have only started to take advantage of it, but hope to complete a full year of skies, starting next July 13th with week 1 of season 6.  My thanks go out to the dedicated hosts who keep it going.
Posted by Black Jack's Carol at 10:18 AM