A hypnotist, an osprey family, three bears and Gay Pride.

My "Our World Tuesday" post will be shorter today, as my google storage account is apparently full to capacity.  If anyone else has had to make a decision between an old account or a new one, it would be great to hear what you have learned.  In the meantime, here is the abbreviated version of my week.

Last Wednesday, we went to Port Moody for another peek at the osprey family, and on the way, Bill noticed this mural on the walls of a store in Burnaby at the corner of MacDonald Avenue and Hastings Street.  I enjoyed taking the pictures, but only realized this morning that the mural depicts a real event.  In case you can't read the words on that sign, they are:

In the early 1930's, a vaudeville hypnotist was playing at the Regent
Theatre on Hastings Street.  As a publicity stunt, he placed a young woman in a
trance and she slept overnight in the front window of Monk's Dry Goods Store. 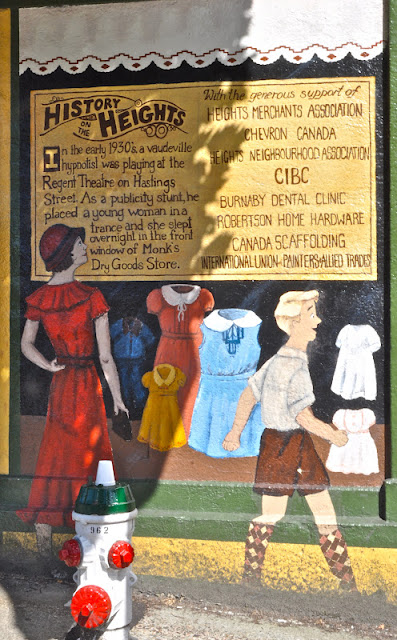 The young lady sleeps as onlookers stare in the window. 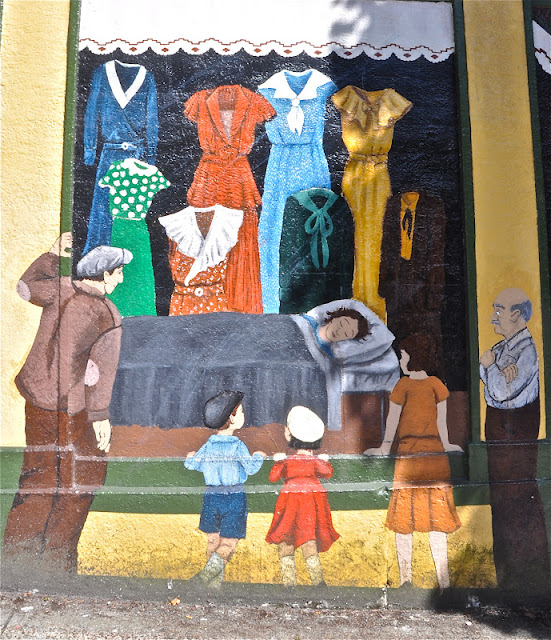 I tried to join the crowd but needed to grow a couple of inches taller to get a look at the lady. 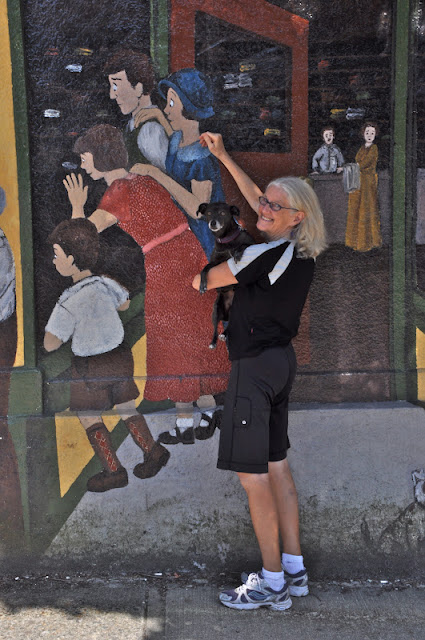 Bill fit into the picture beautifully as he checked out the hypnotist. 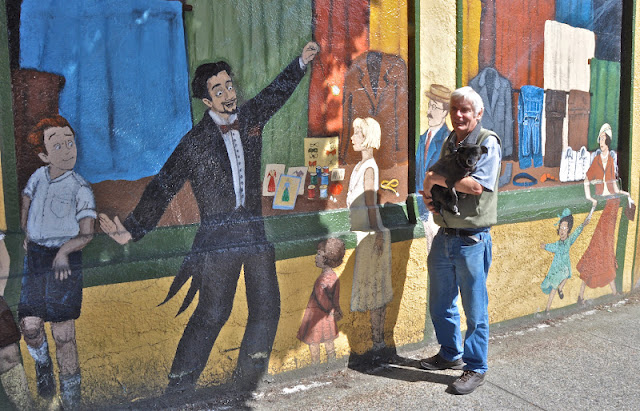 The osprey chick (we've name him/her Pat) had grown a lot, and.. 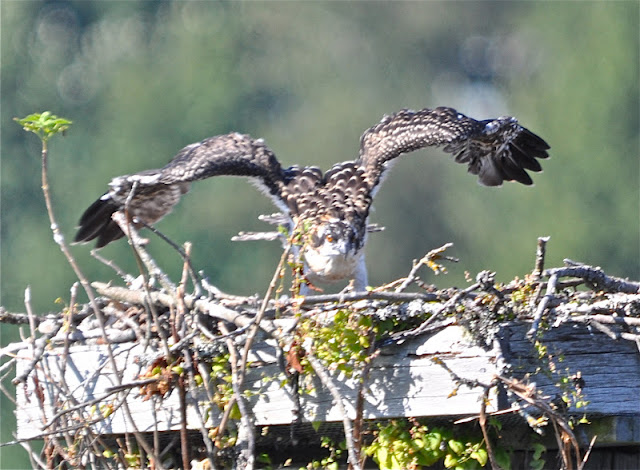 was working hard to get his/her wings under control. 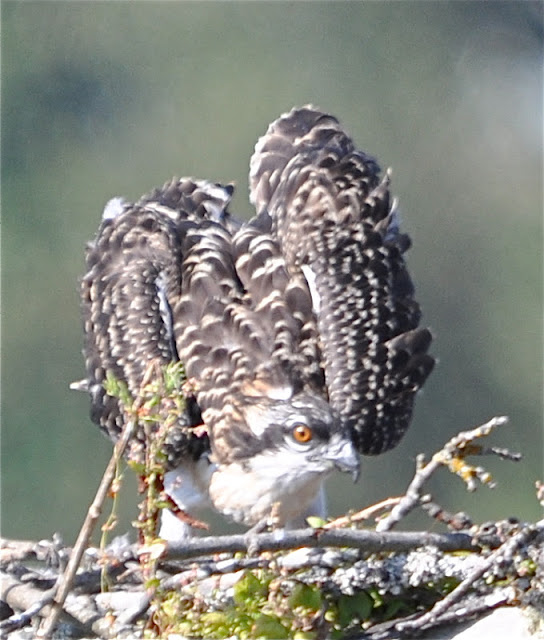 Dad (Matt) brought in a flat fish and Mom (Mimi) tore it from his talons as Pat looked on. 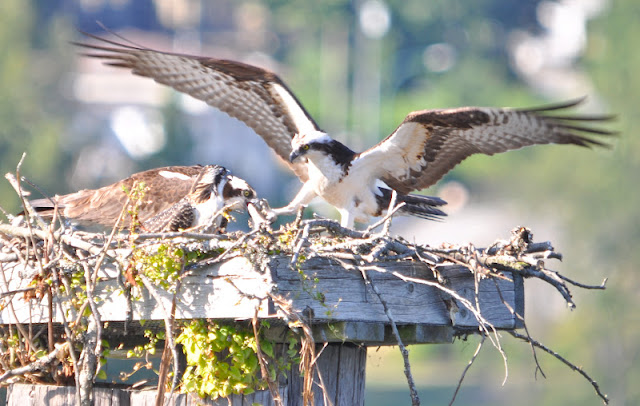 We continued on to Deboville Slough, where we saw one handsome young buck, 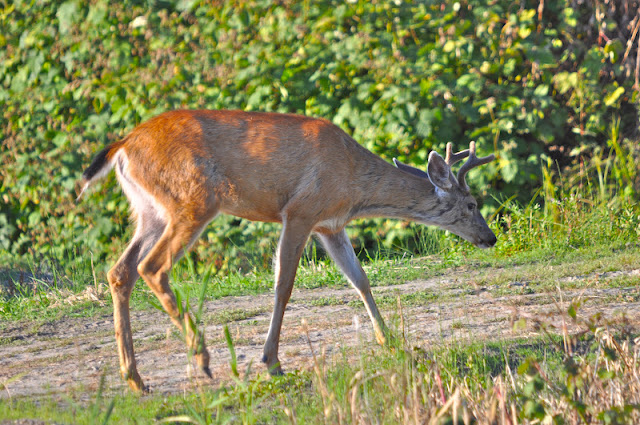 and, as I've already talked about in the previous post, I had the huge thrill of seeing bears in the wild for the first time, ever.  I'm adding a few more pictures of the bears here.  This is Mom, stepping as daintily as a tightrope walker across this log. 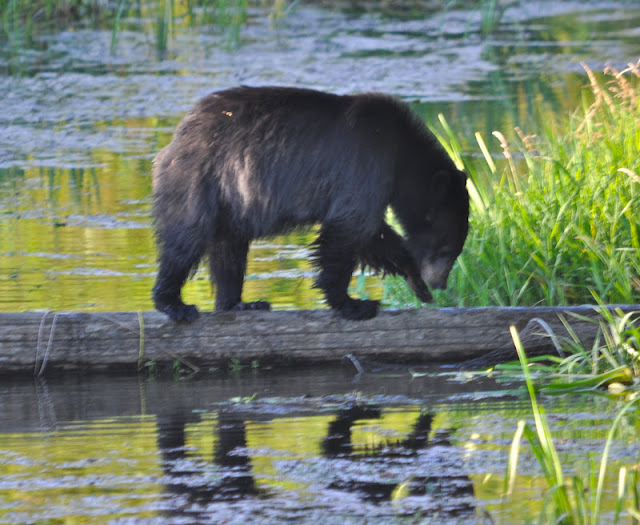 Here she is with one of her cubs. 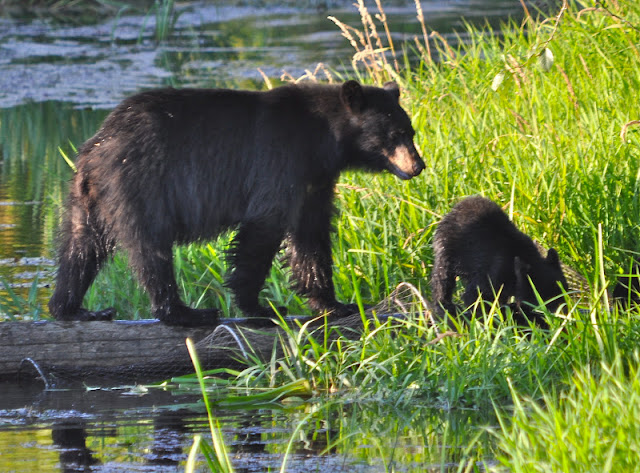 They had found that salmon in a net at the side of the log.  The cub appears to be enjoying it very, very much.  I didn't see this "catch" from the beginning, but think there was a lesson going on here.  Perhaps, Mom discovered the salmon but let the cubs get it out of the net themselves, or perhaps, she just wanted the cubs to practice dividing up the spoils.  I don't show it here, but there was one picture of the two of them pulling at the salmon, and they did each get a share. 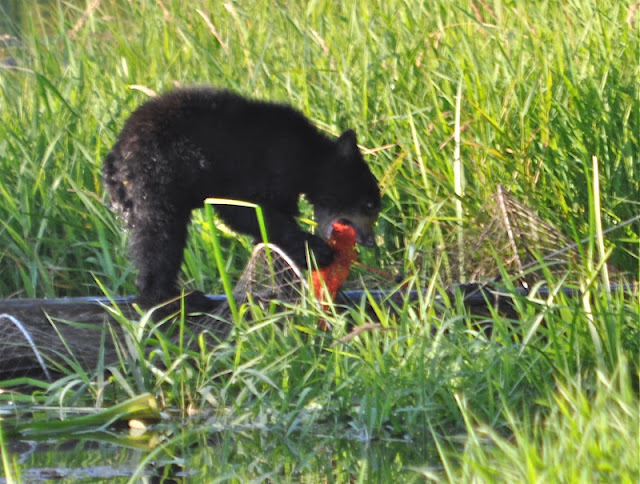 The second cub goes back to the net, perhaps hoping to find leftovers. 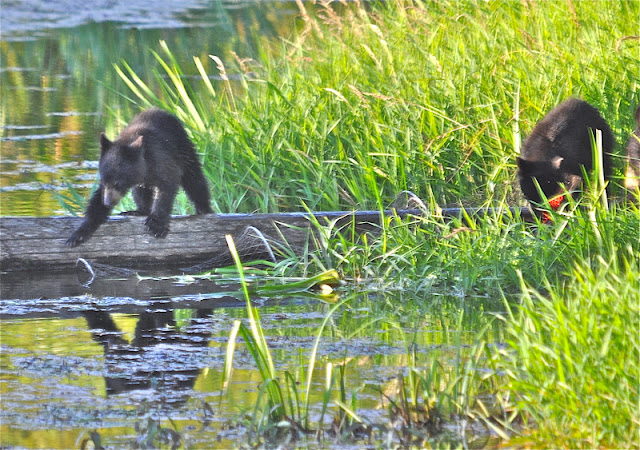 Saturday was the third and final night of Vancouver's Celebration of Light fireworks.  I took this flower by the seawall as we walked toward Vanier Park. 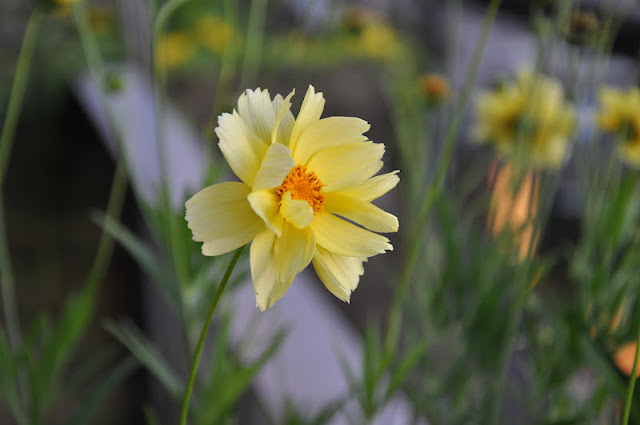 The presenting country was Italy, and I've just learned that it was the winner chosen from the three competitors (Vietnam, Brazil and Italy). 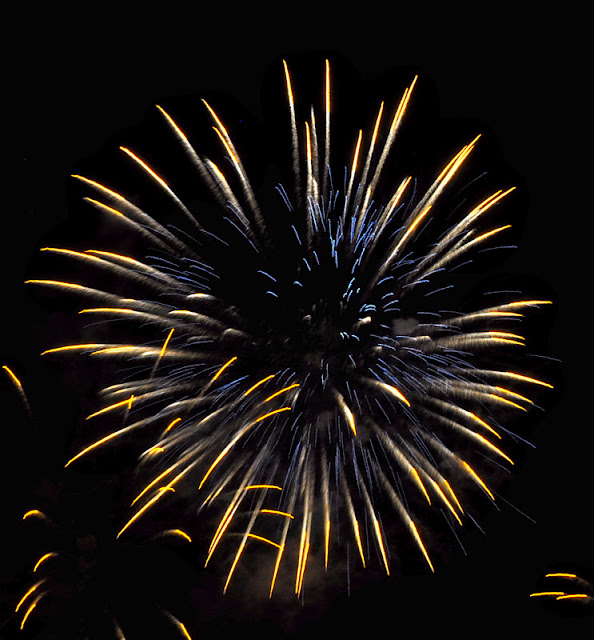 Italy would have been my choice as well.  I thought the images were more creative, the colours more unusual, and the choreography really well planned. 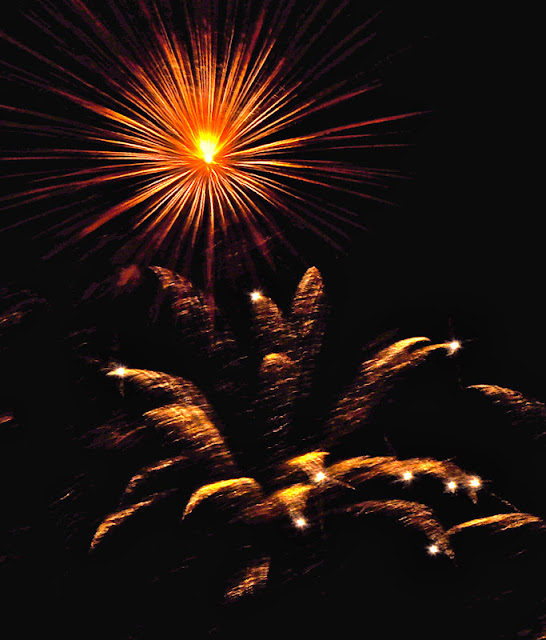 On Sunday, Bill, Black Jack and I watched, for the first time ever, Vancouver's Gay Pride Parade.  The idea began in 1973 when the organization, Gay Alliance Toward Equality, organized a week of awareness activities to support gays and lesbians.  The first parade was in 1978 and it now Includes support for transgendered and bisexual people. As with fireworks, parades are not really my thing, but taking photographs (would you believe I took 1250 of them?) gave me a focus, and for those who love them, this is perhaps one of the best ways of raising awareness of the themes of "educate, liberate and celebrate."  School board and government members, police, firemen and a kazillion  other associations in Vancouver were all represented.  As a teacher, I can never forget that there is still work to be done to raise awareness in this area. We have come a long way as a society, but we are not there yet. I'm sad not to be able to show more of the pictures, but here is one to give you an idea of the crowds along Beach Avenue on one of the hottest days of the summer. 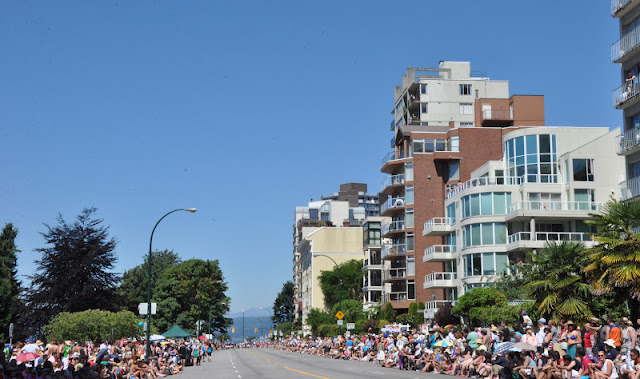 I have a lot of close-up shots.  To say many of the participants were outgoing would be an understatement.  I love the sheer energy and goodwill that came through, time and time again.  This fellow saw me with my camera, and gave me a special.. 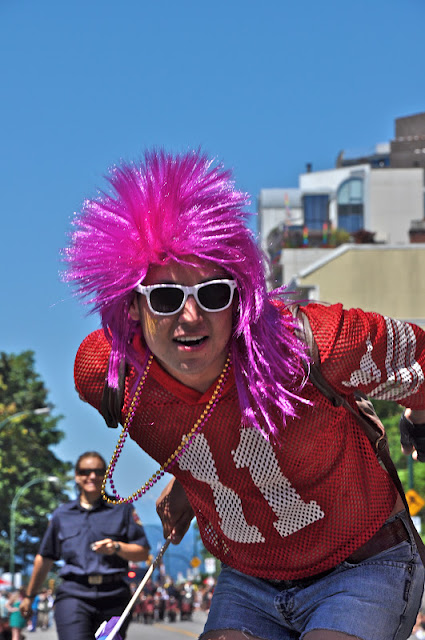 little show that just made my day.  I'm still going through the pictures, and hope to post an album of some of them, perhaps on facebook or Flickr. 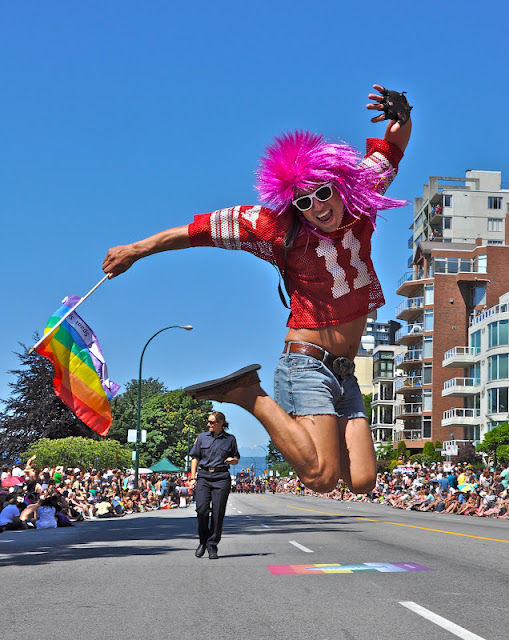 In the mean time, thank you for stopping by.  Wish me luck sorting out the google storage problem and do take some time to check out events in lives of people across the world by going to the Our World Tuesday site.