On Sunday, we walked across the street and into David Lam Park, made a left along the False Creek walkway, another left to turn up Homer Street and then a right to the corner of it Smythe Street for lattés and cookies at Harrison Galleries.  It was an ordinary walk that we've done many times but it felt extraordinary.  A petal was about to fall from this magnolia bloom and I gave it a helping hand.  A magical kingdom was revealed inside. 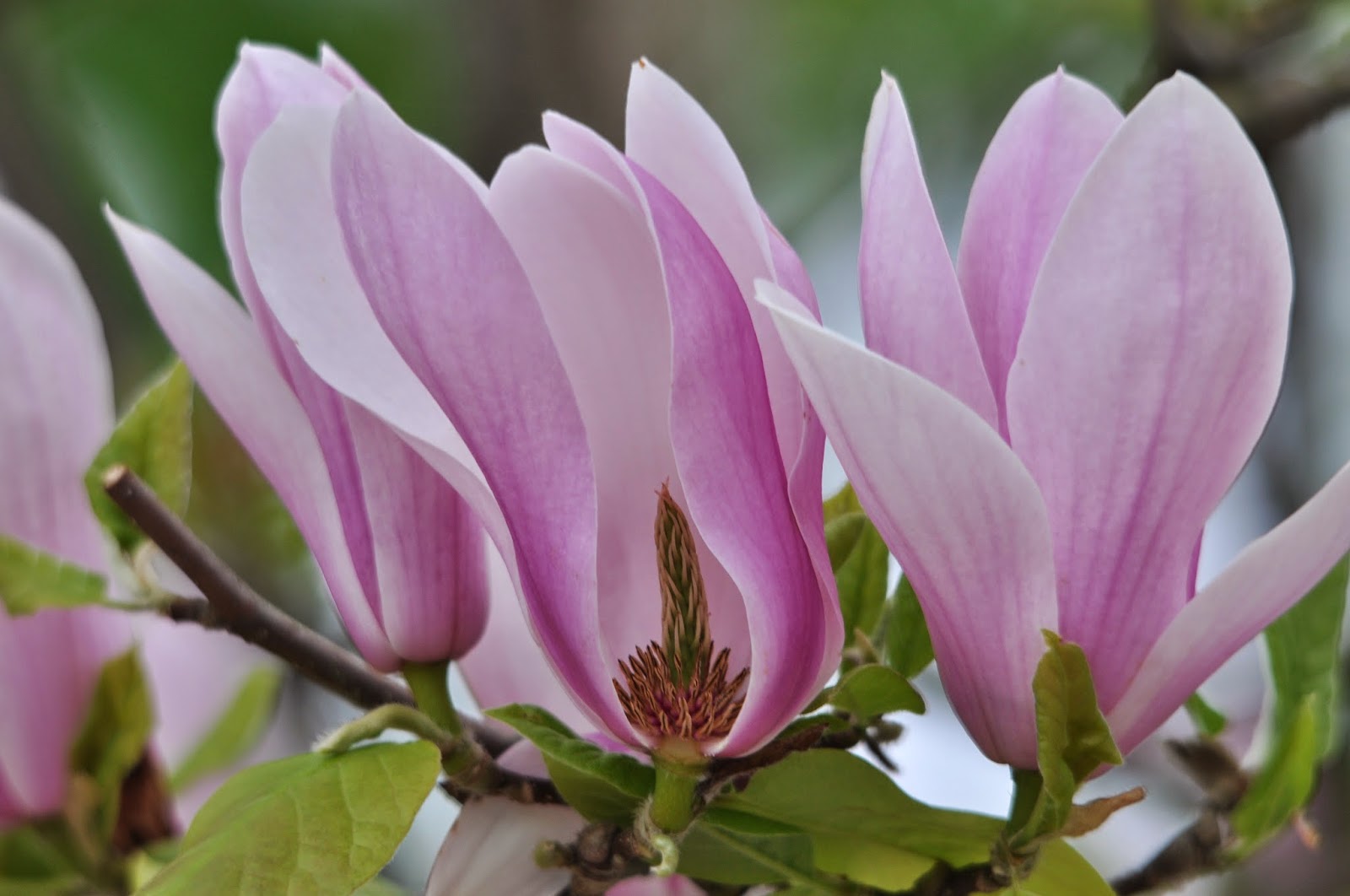 I asked Bill to pose by the flowers, but didn't expect what I saw through my lens just as I was ready to snap the photo.  He had moved under the magnolia bush, letting this bloom rest ever so lightly on his head.  I laughed until my jaw and sides ached. 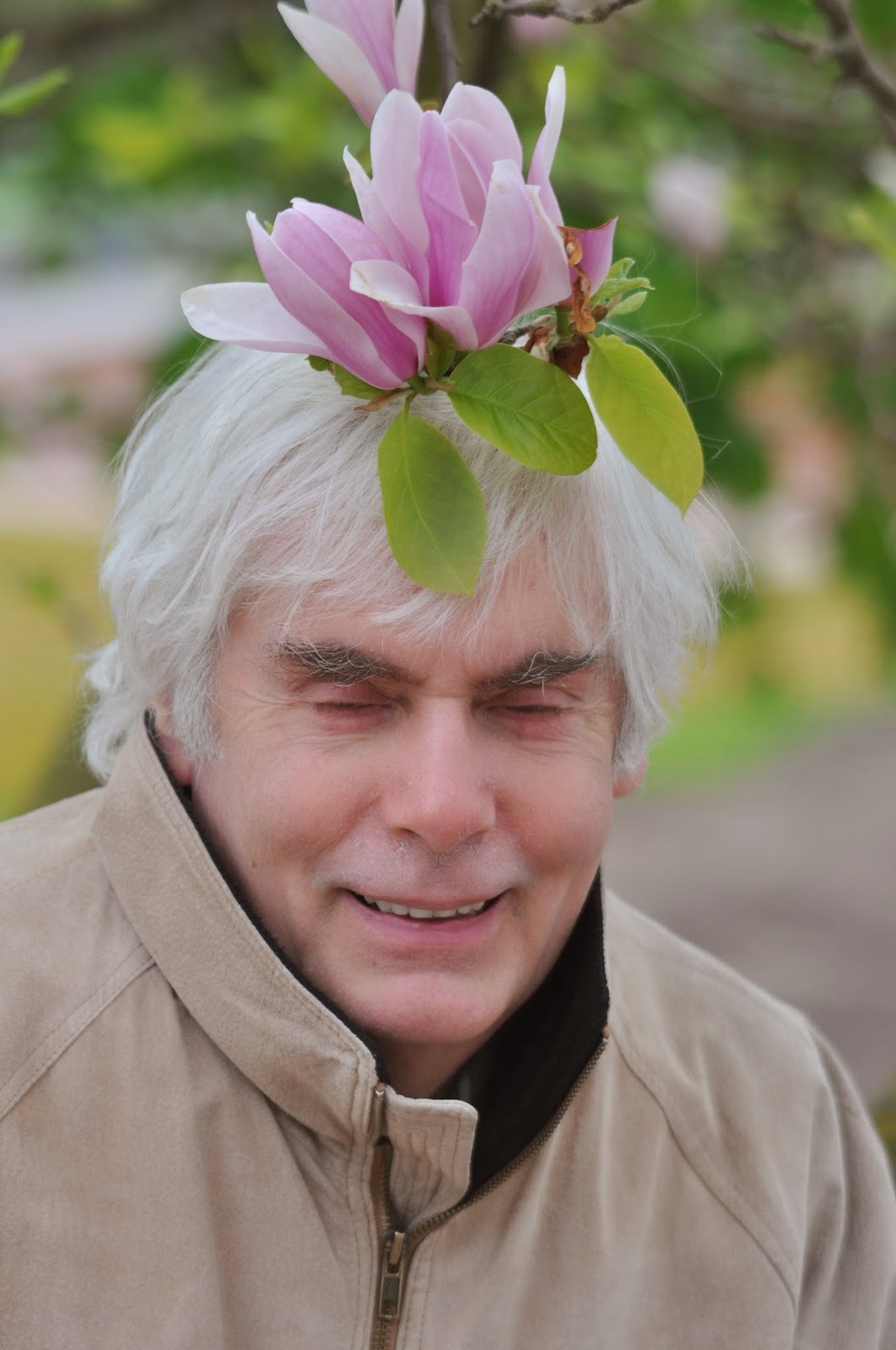 Then, he suggested I pose as well.  I did, but knowing the lens is heavy (my small one is still broken), and Bill rarely uses it, was not expecting a keeper.  In fact, I will treasure the laughter in this one, inspired by that sweet, silly grin on his face. Perhaps, people will think we were dressed in our Easter bonnets.  Next time, it will be Black Jack's turn. 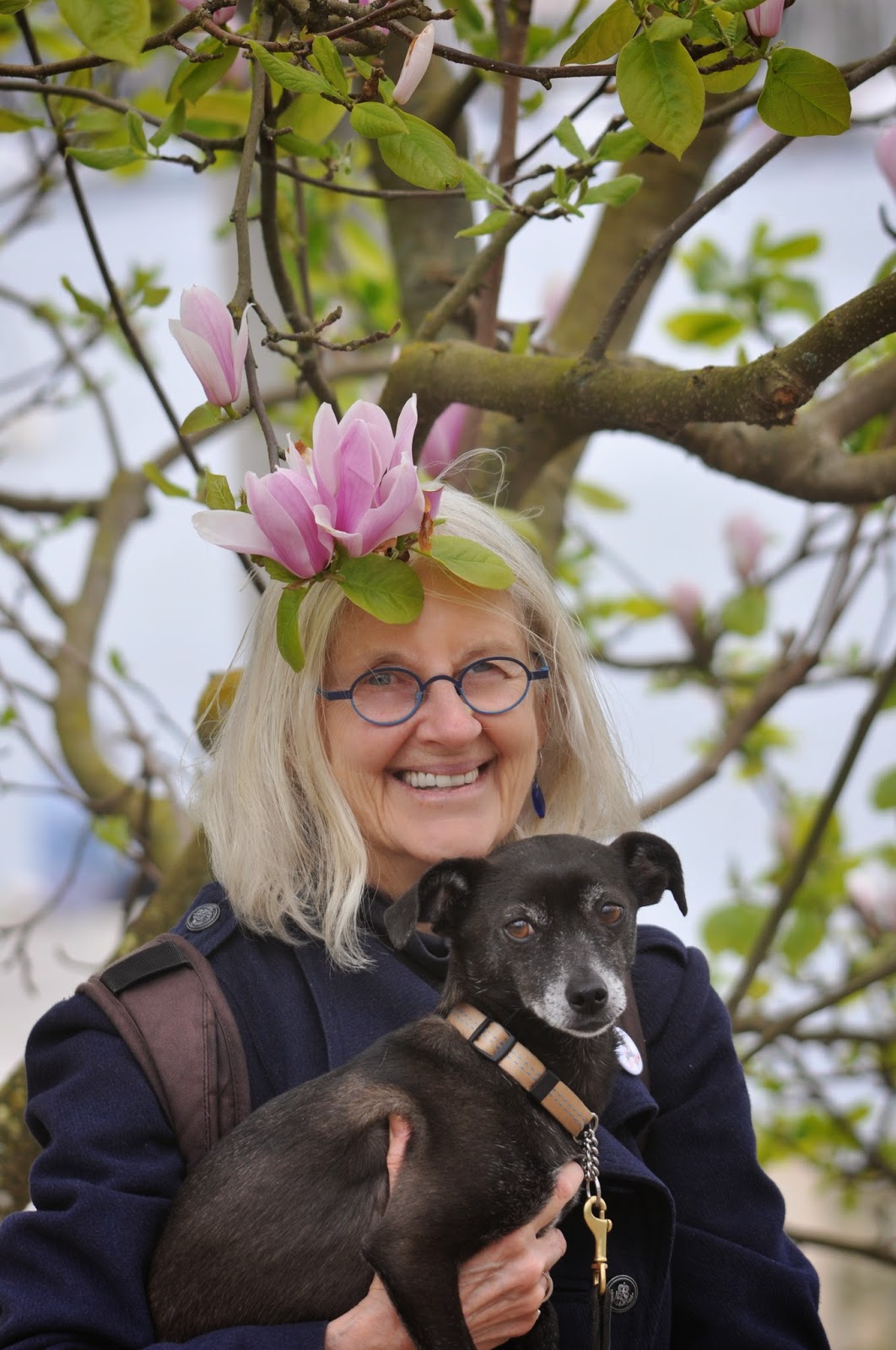 We continued past the sculpture where the cormorants love to rest. 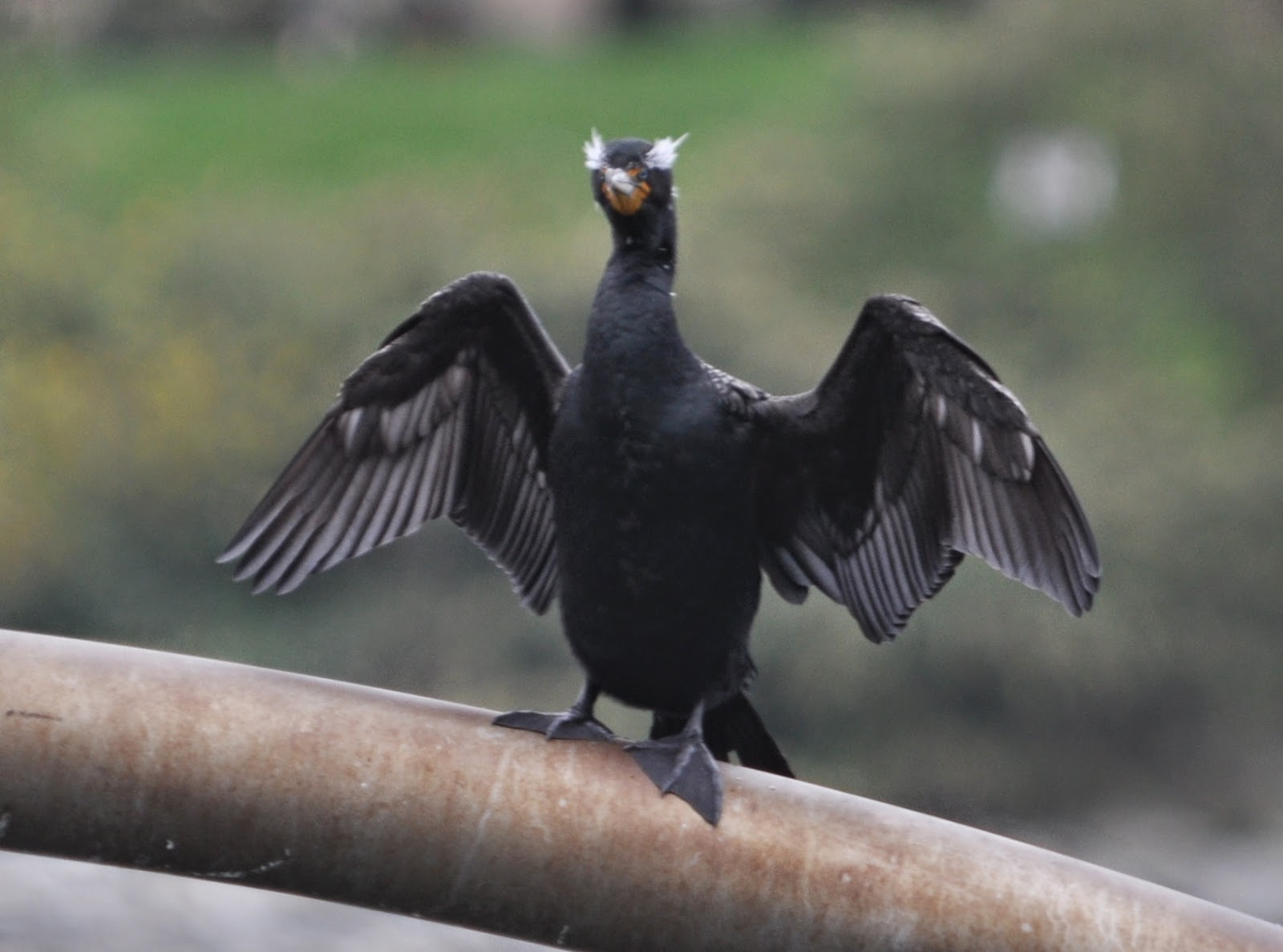 I had just settled after my laughter over the magnolia, but the shaggy eyebrows and serious expression on this one made me laugh again. 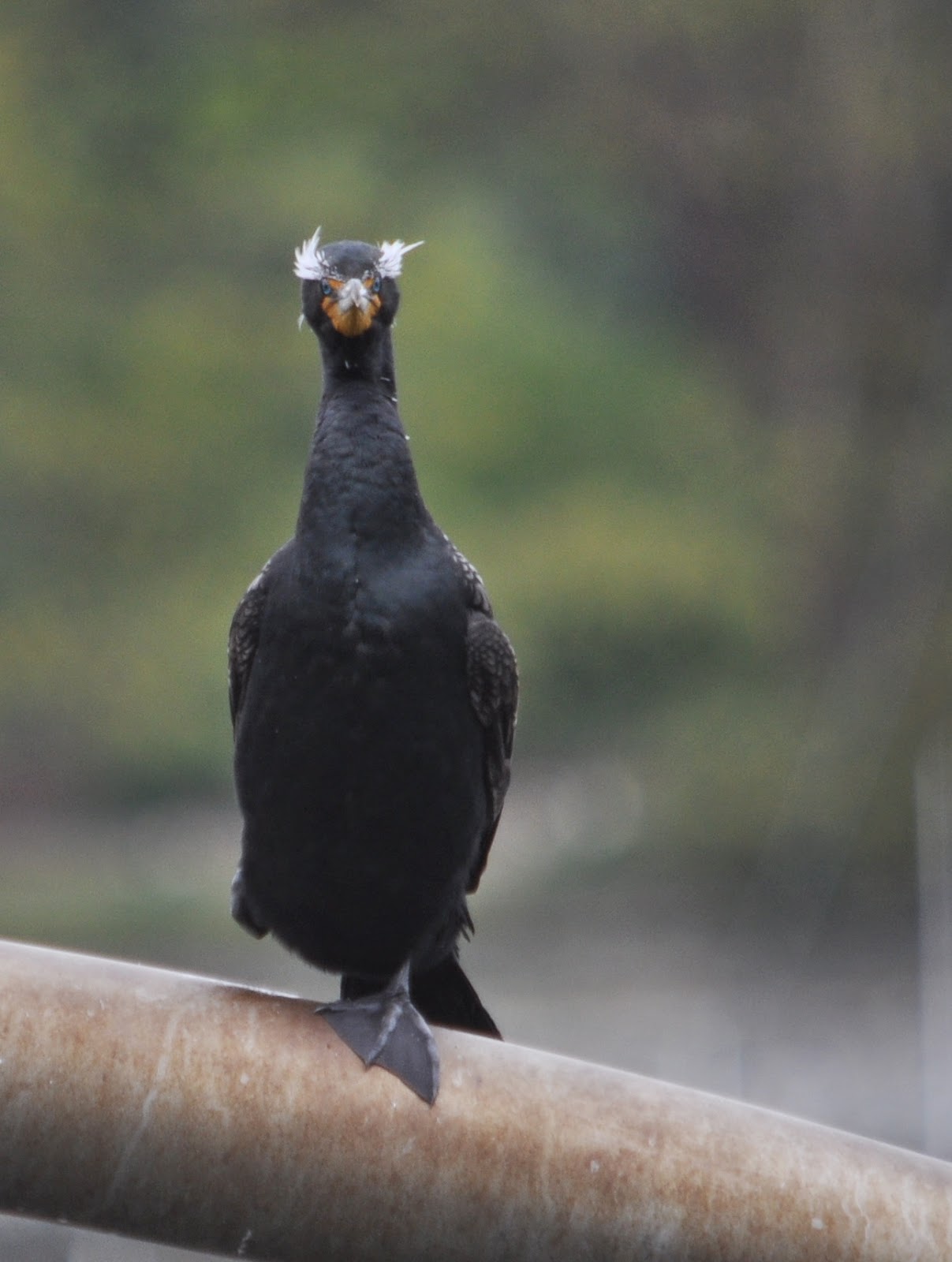 I guessed "Mrs. Eyebrows" was a mom, "Junior" the baby of the family (lighter colour) and perhaps "Big Bro" on the left an older sibling.

You need to look good for the photo.
Ah, Ma!
What about me? How come I have to do my own grooming? 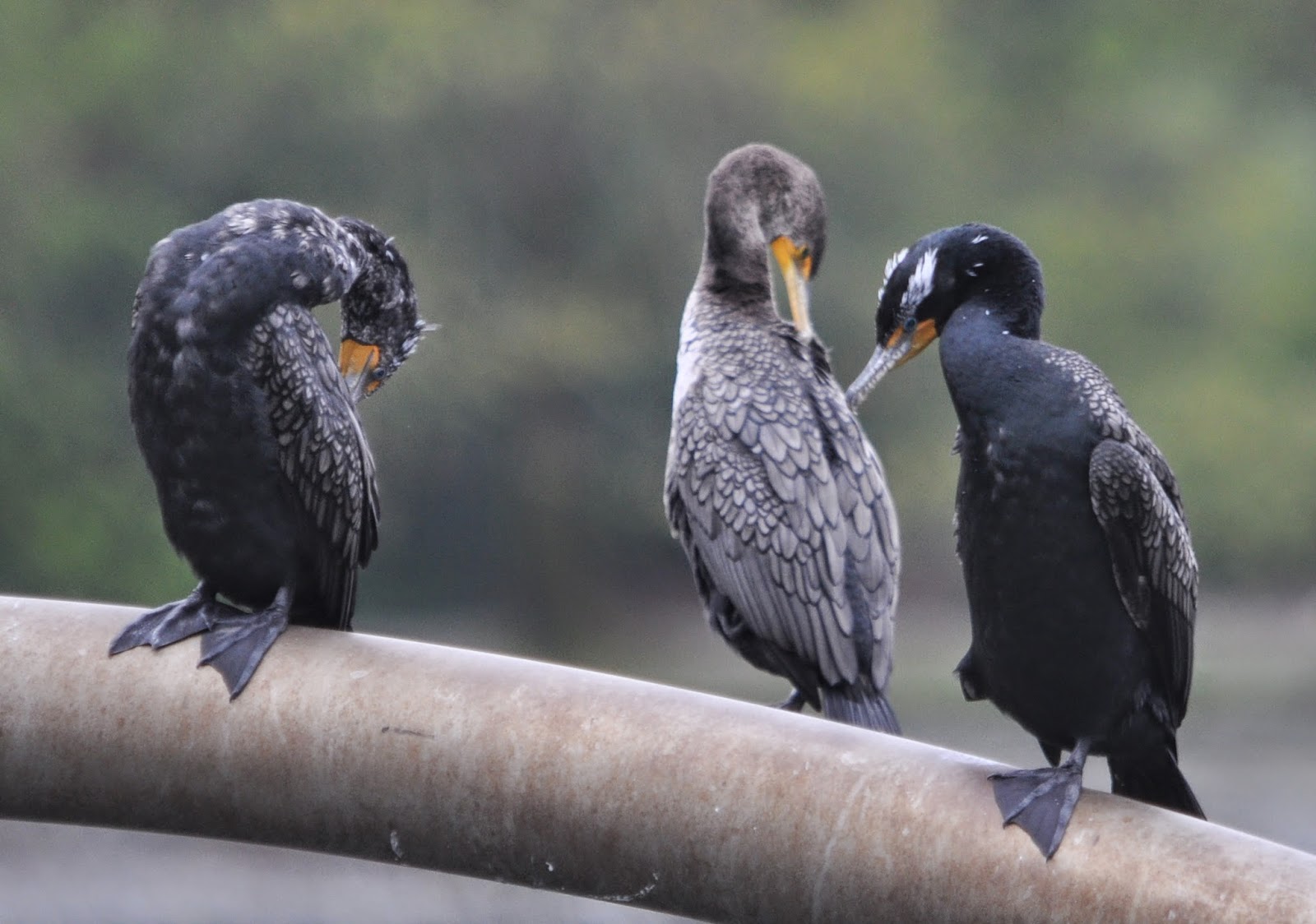 A fourth member of the family flew in.. 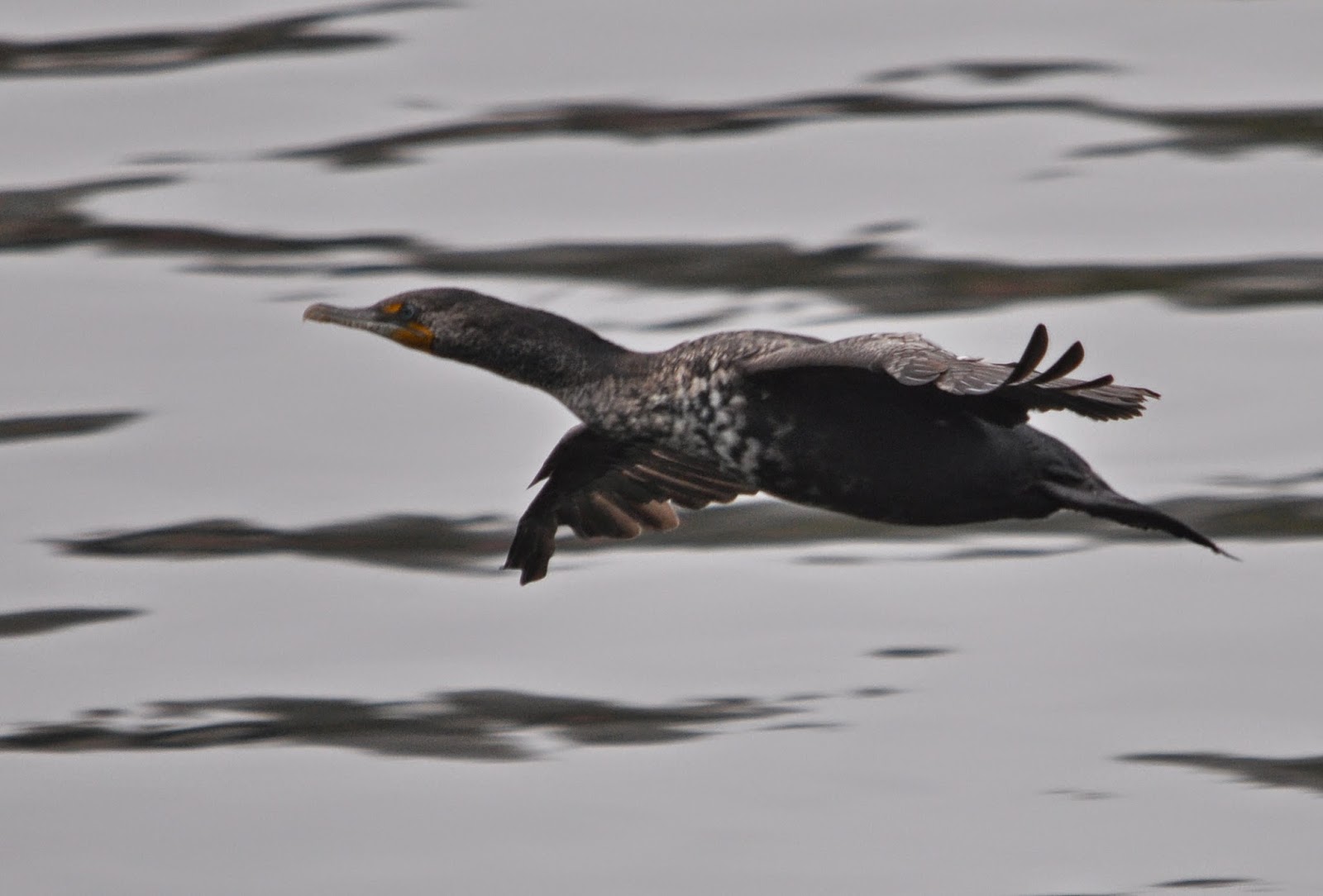 and landed to the left of the others.

It's about time you got here!  Ma is giving Junior all the attention. 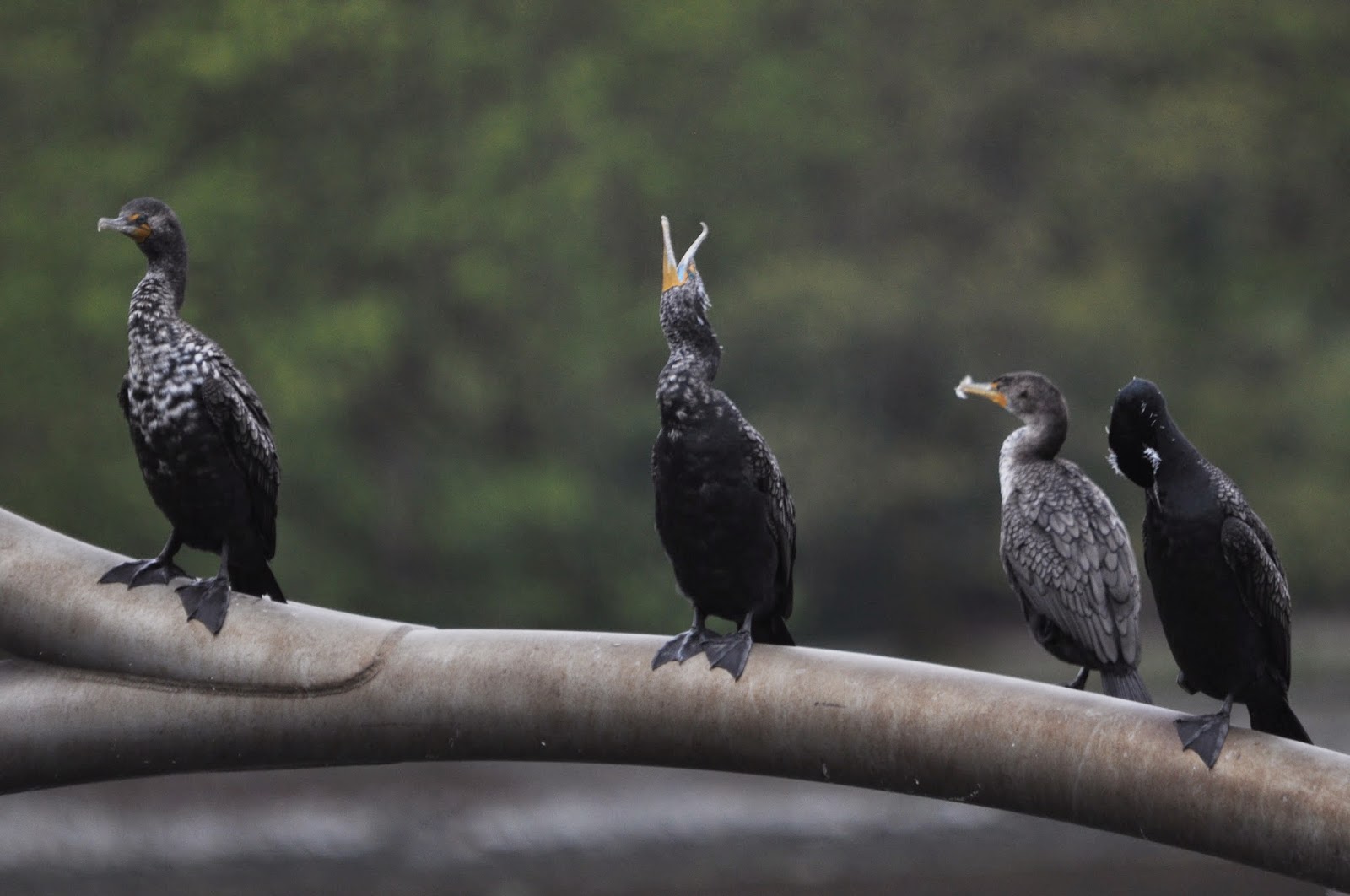 Oh, keep quiet or I'll cut you right out of the photo with my wing.
Junior: Look at me. My wings are so much lighter now! 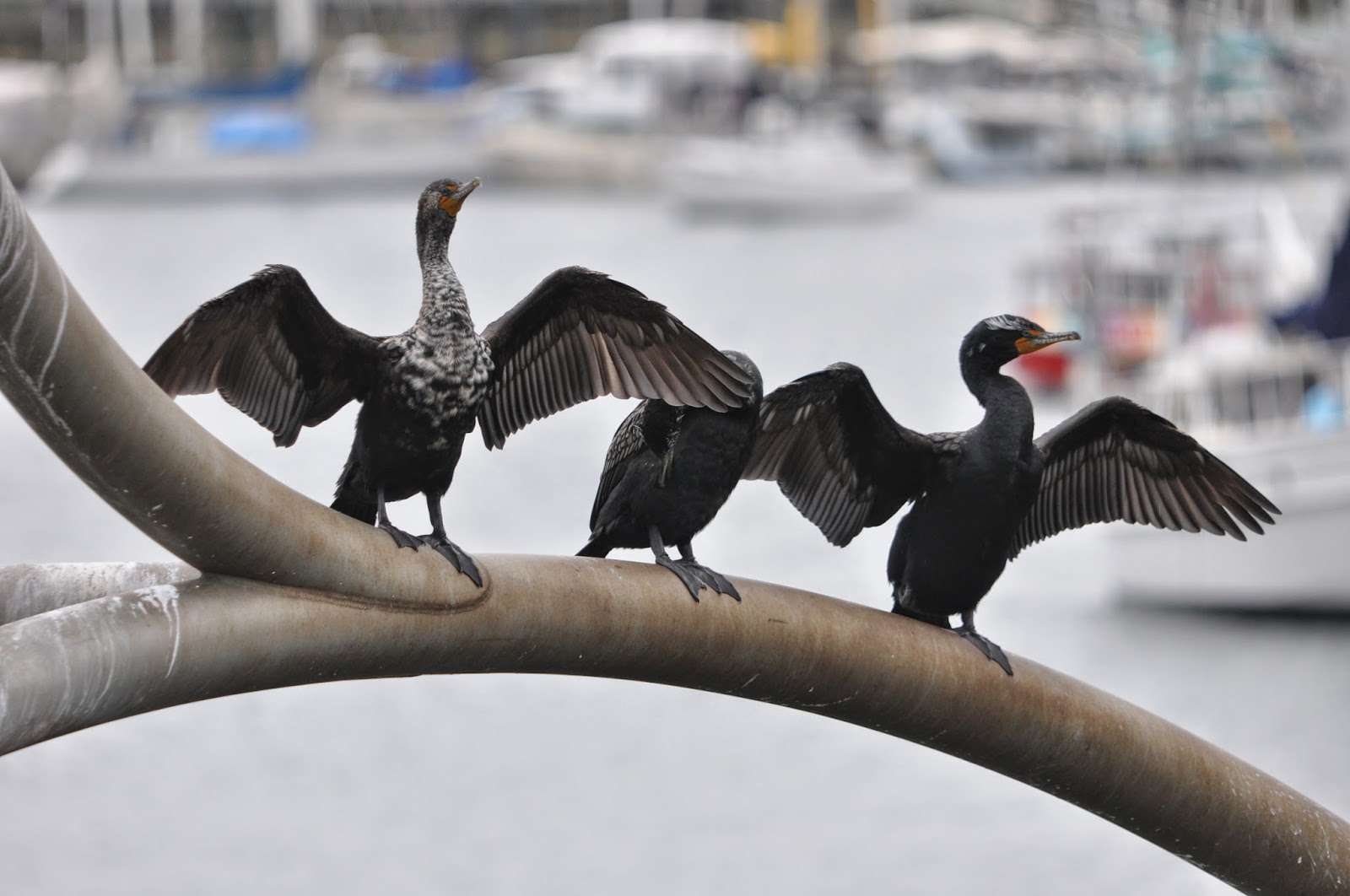 Bill was finally able to tear me away from the cormorants, but a few seconds later, I noticed this checkerboard flower.  I had never seen one quite like it. 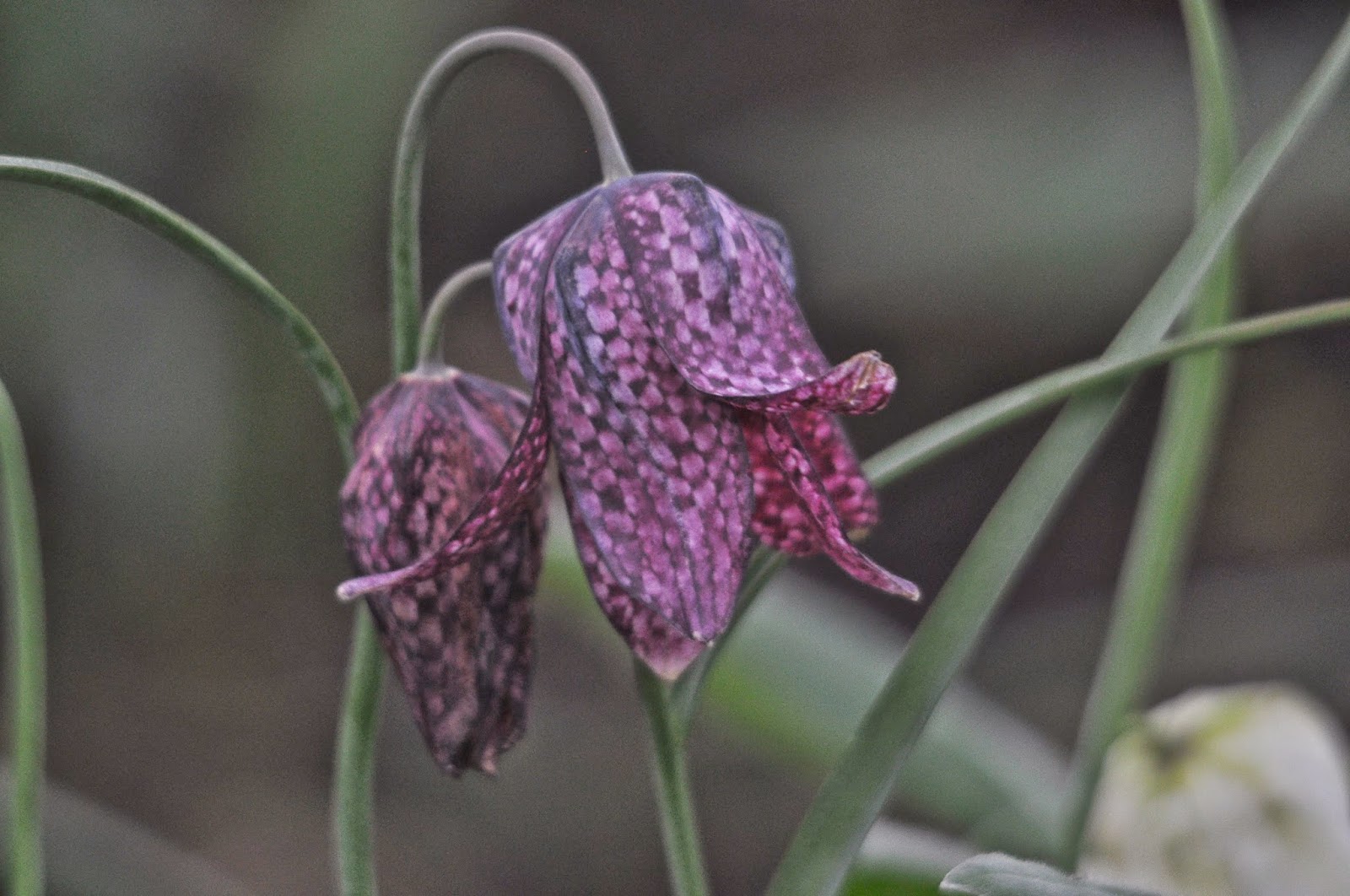 A helicopter hovered for a while and I used my lens as binoculars to discover it was from CTV.  Perhaps they were doing a news story on Easter bonnets :) 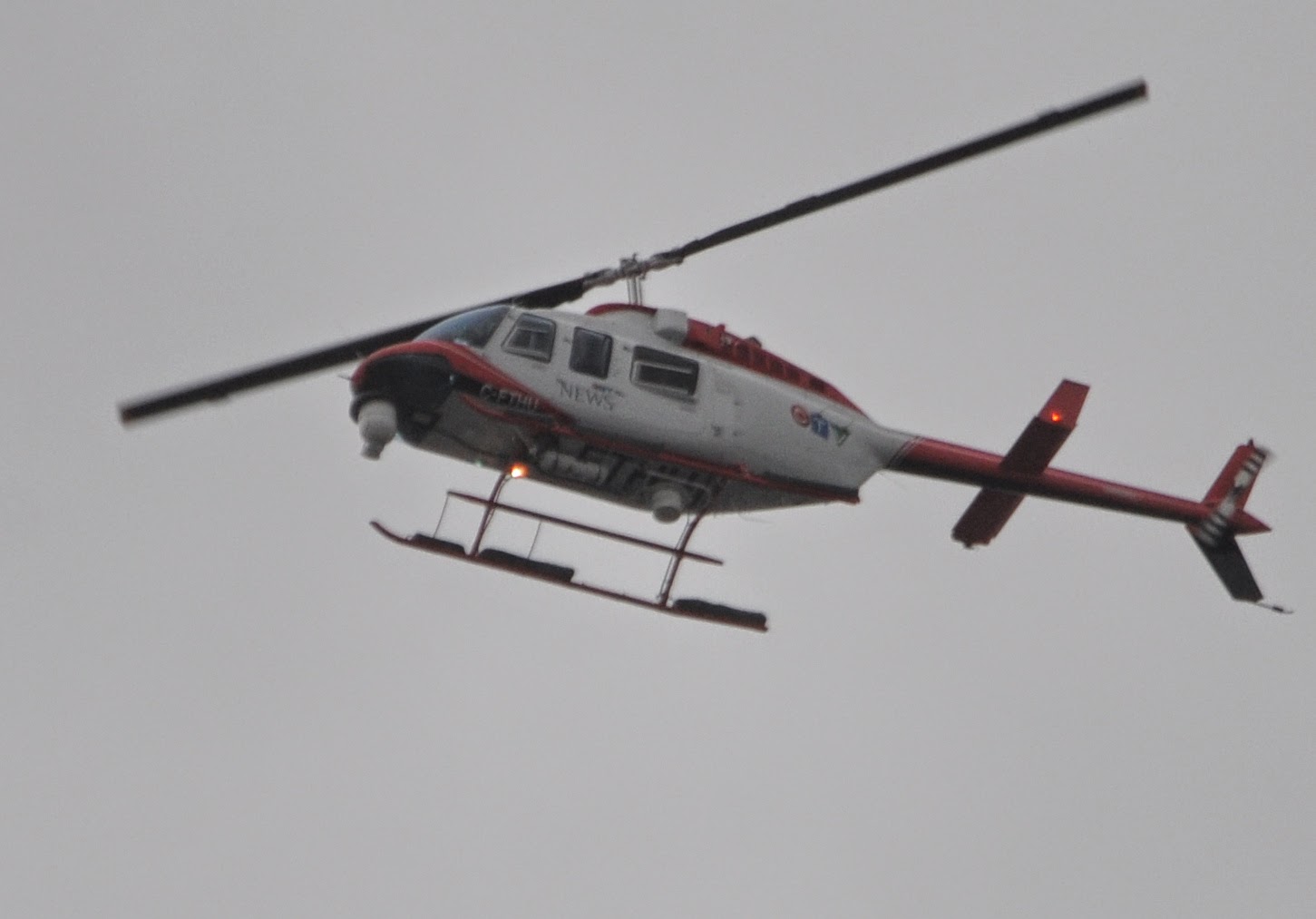 A voice beside me said, "Does that lens let you see the people inside the plane?"  "Almost," I answered.  The gentleman who spoke had an adorable dog named Dolce.  The musical translation for that word is to play "sweetly" and we had a conversation about its meaning in everyday Italian conversation.  The word does mean sweetly; one of its meanings would be to describe the dessert portion of a meal. 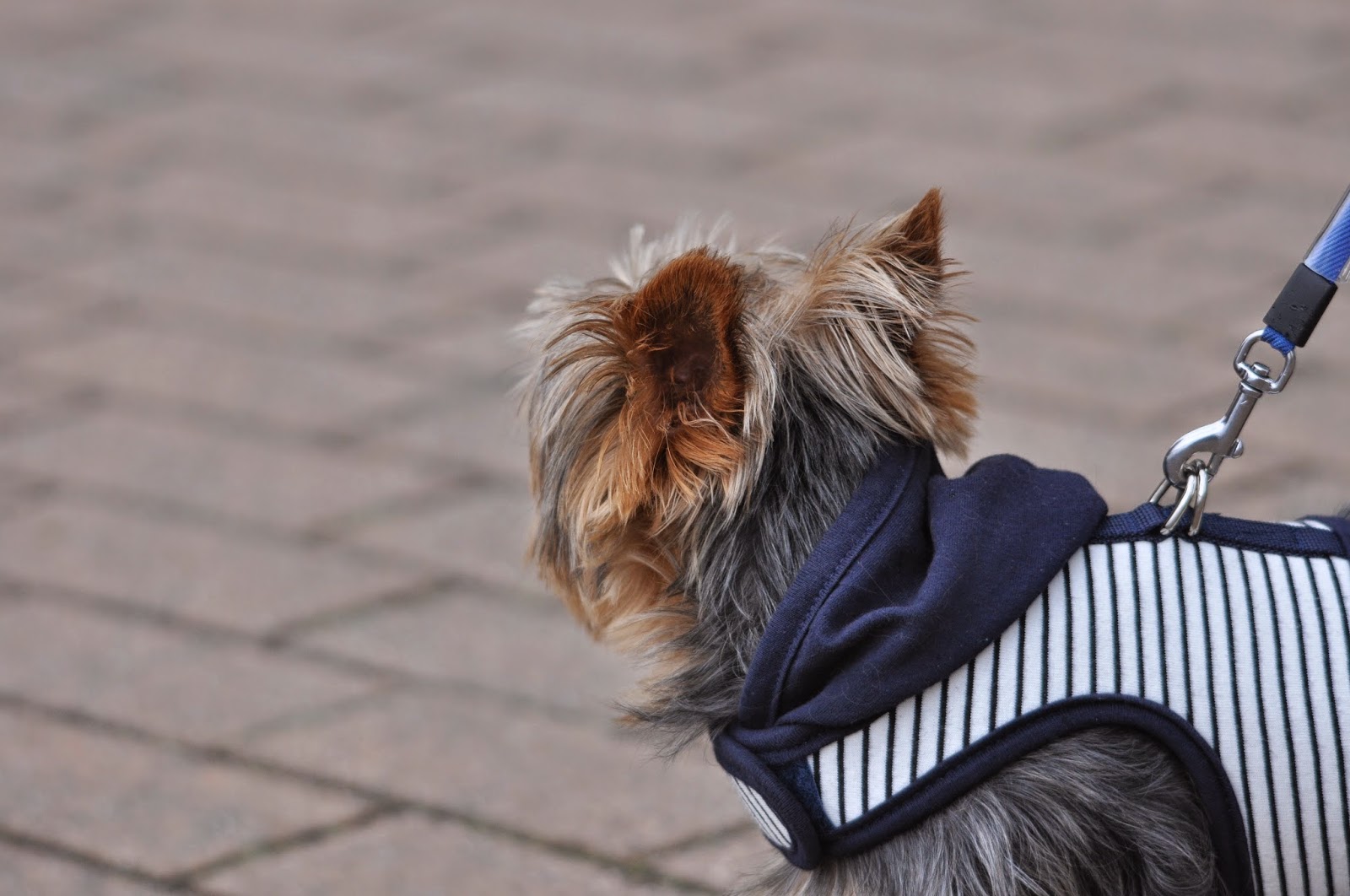 It took a little coaxing but Dolce finally agreed to look at my camera.  What a sweetie! 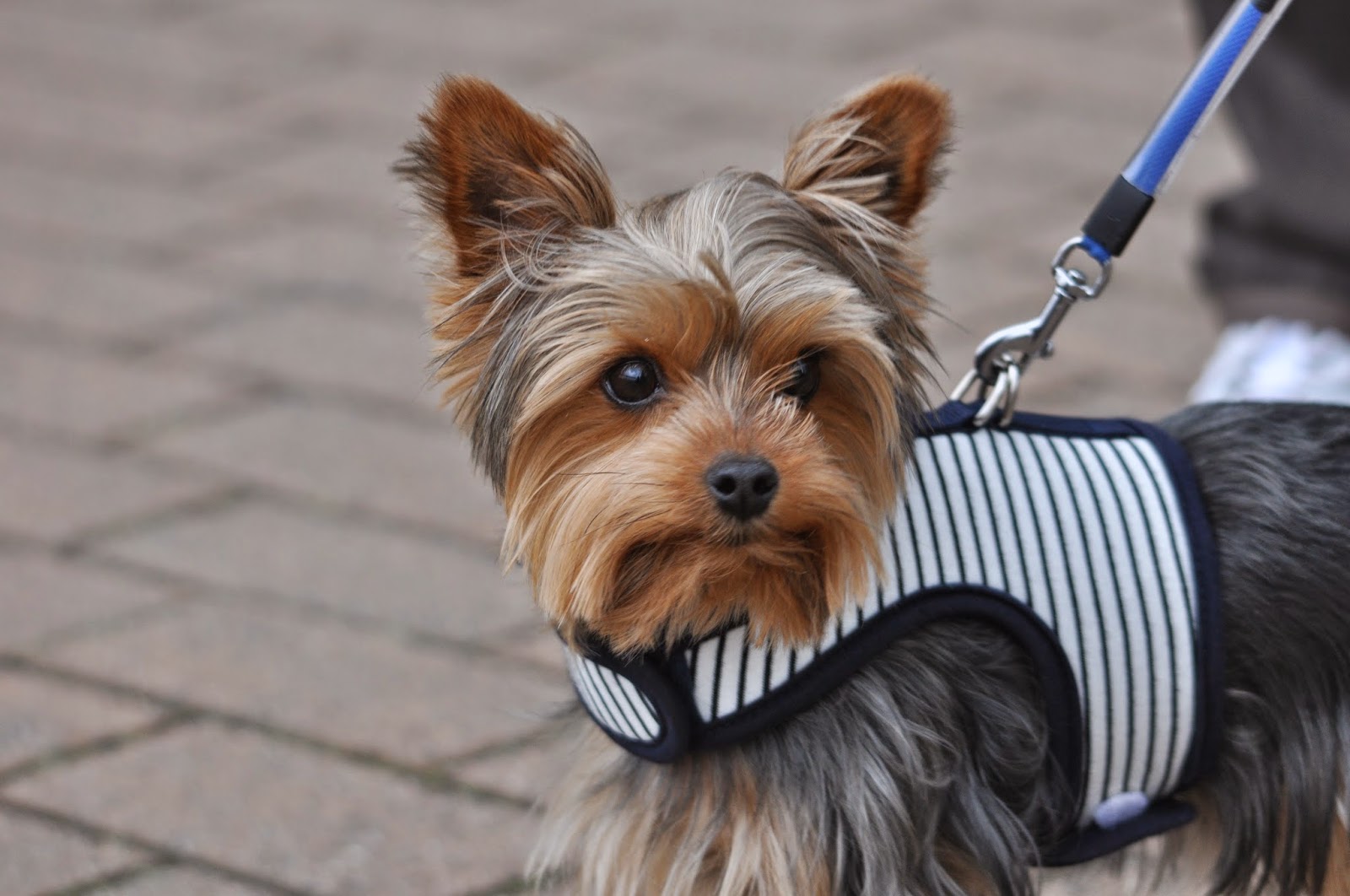 Bill had a question about the translation for the name Sciué, the Italian cafe near us.  He was most interested to learn that that word, while Italian, is of a dialect so different, speakers in other parts of Italy would have difficulty understanding it.  The man said it doesn't really have a specific meaning but conveys an essence of the area where it originates. We talked for a little longer.  Another Vancouver encounter (see yesterday's post) with a complete stranger that enlightened and added warmth to the day.  And the bonus?  We got to meet Dolce! 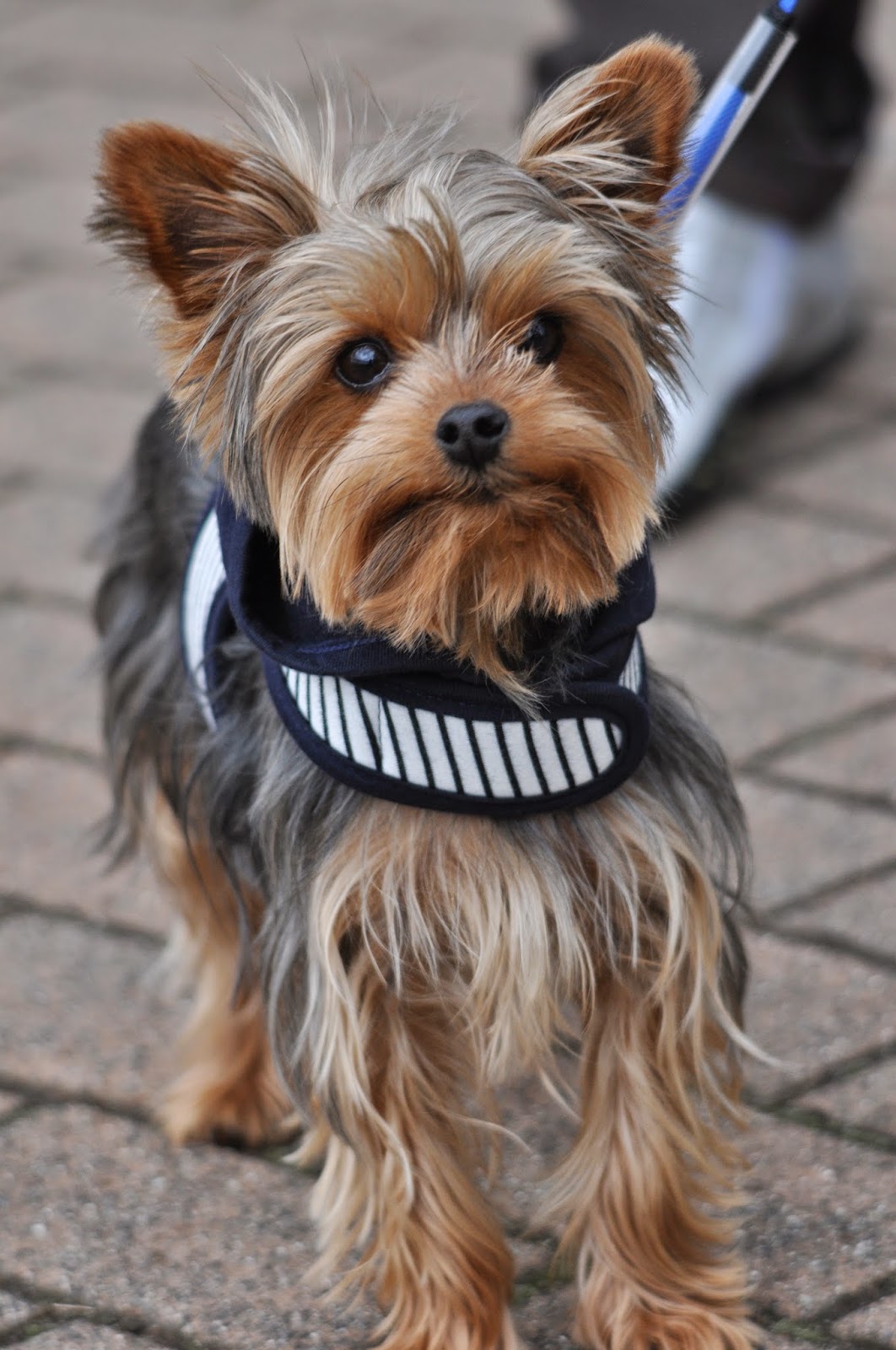 We continued on our way to Harrison's, checking out the hockey score on a TV showing through the open doorway of the Hurricane Grill (Montreal doing well!).. 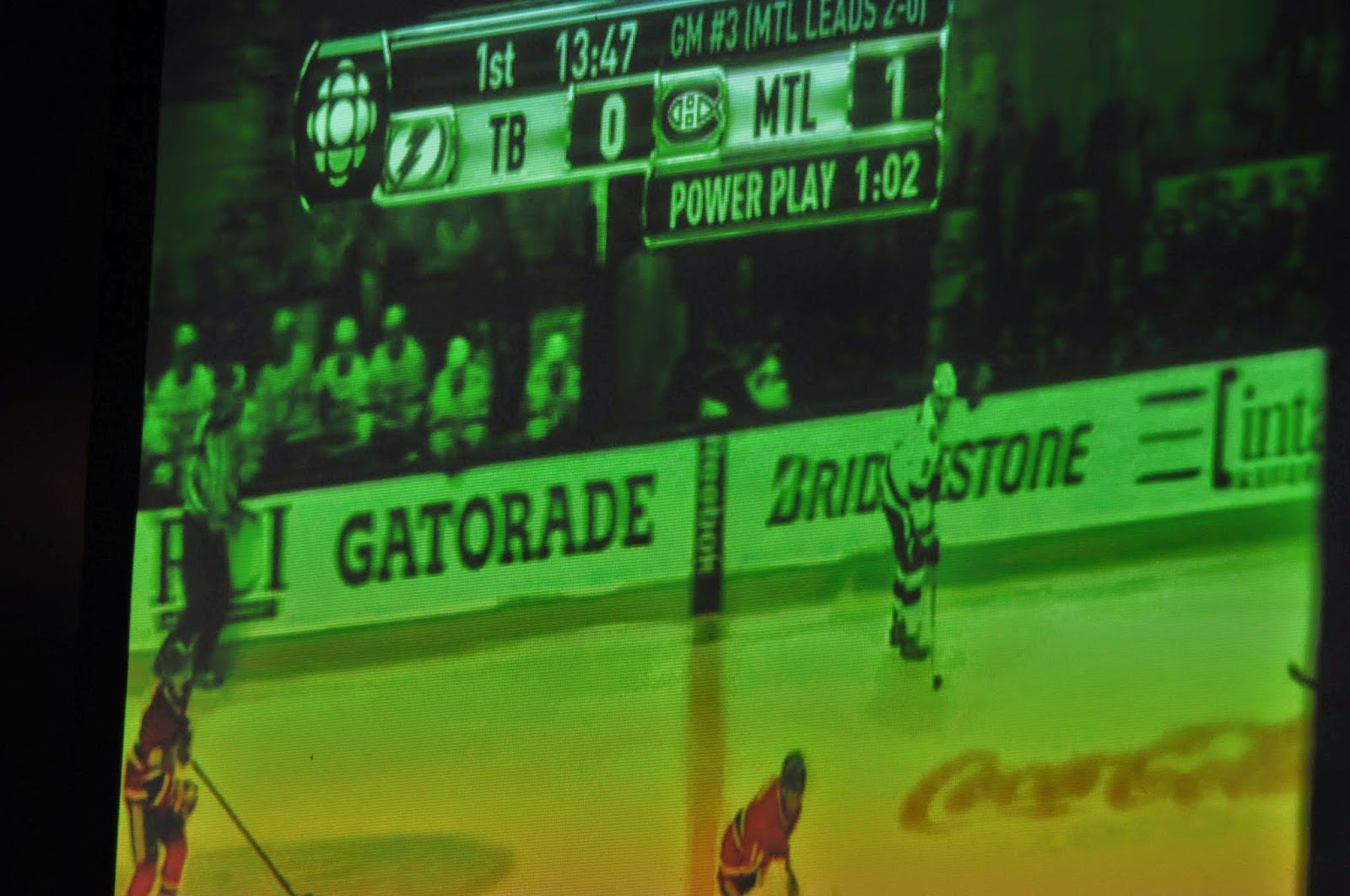 and stopping to admire some gorgeous yellow flowers. 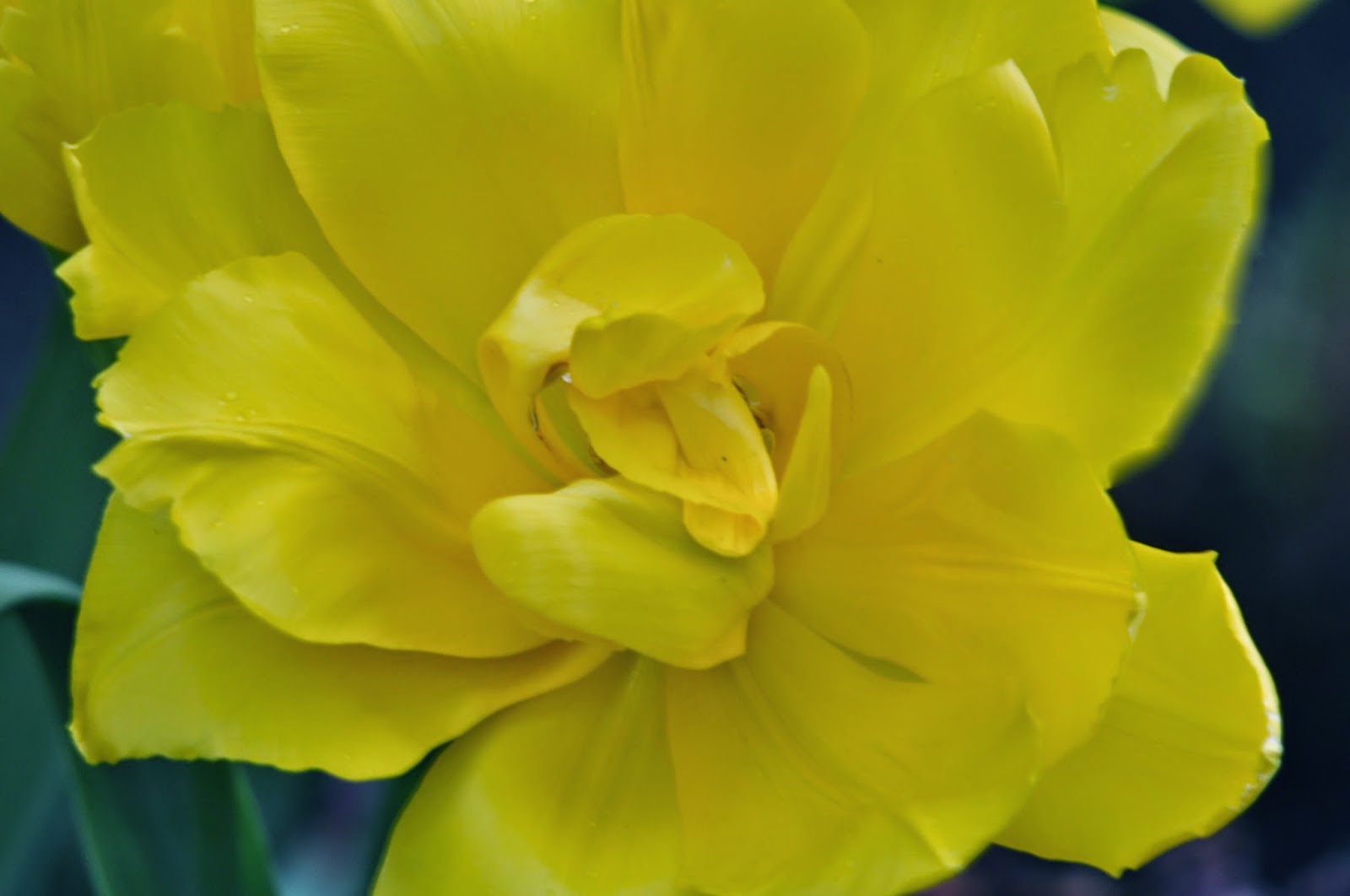 New art was going up on the walls at Harrison Galleries.  I am often surprised how beautifully the brick walls work as backgrounds.  These two wonderful paintings are by Stewart Jones.  To the left is "Brooklyn at Dusk" and to the right is "Havana Revisited". 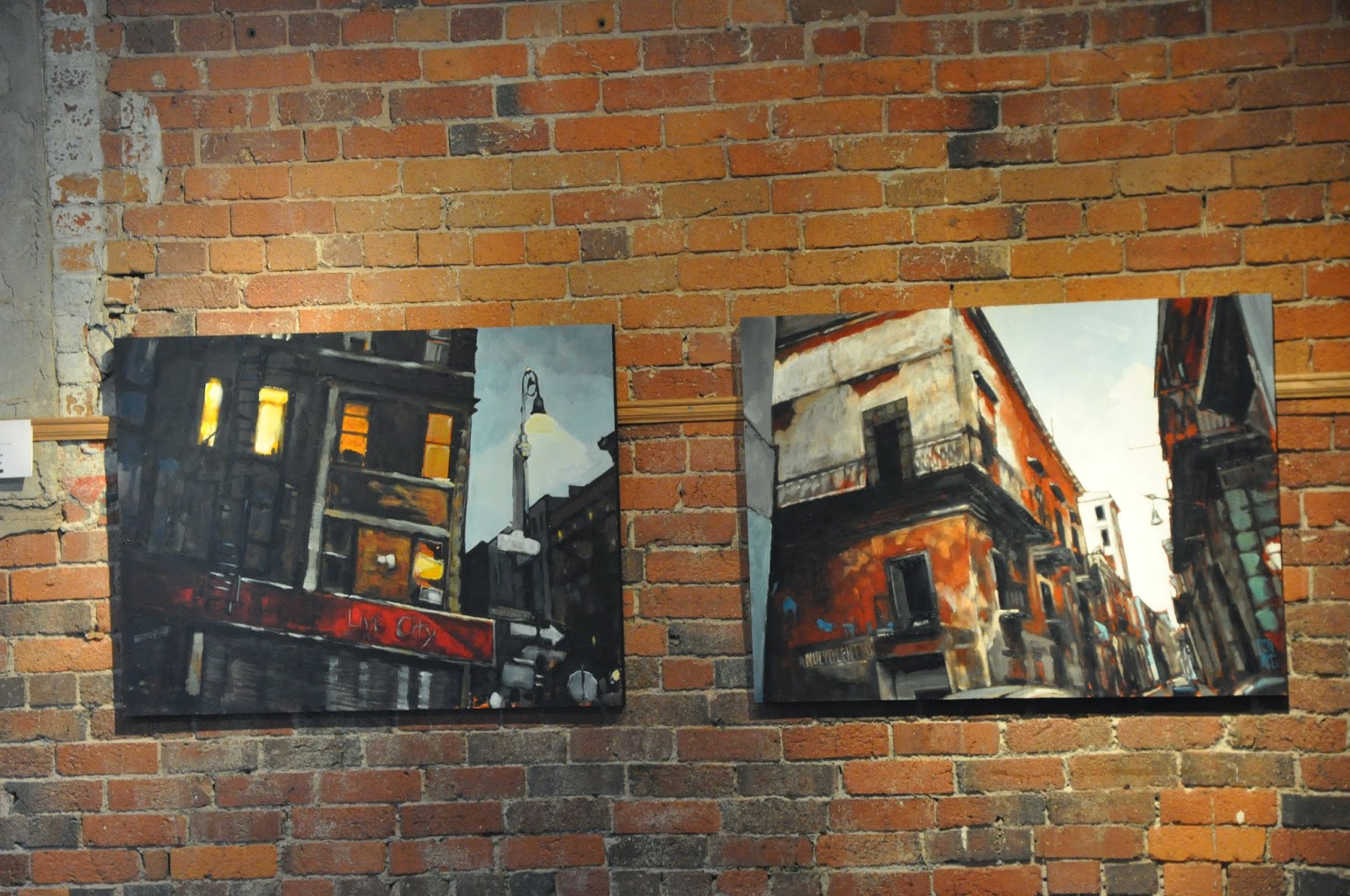 I loved "Gondalier" by Olaf. 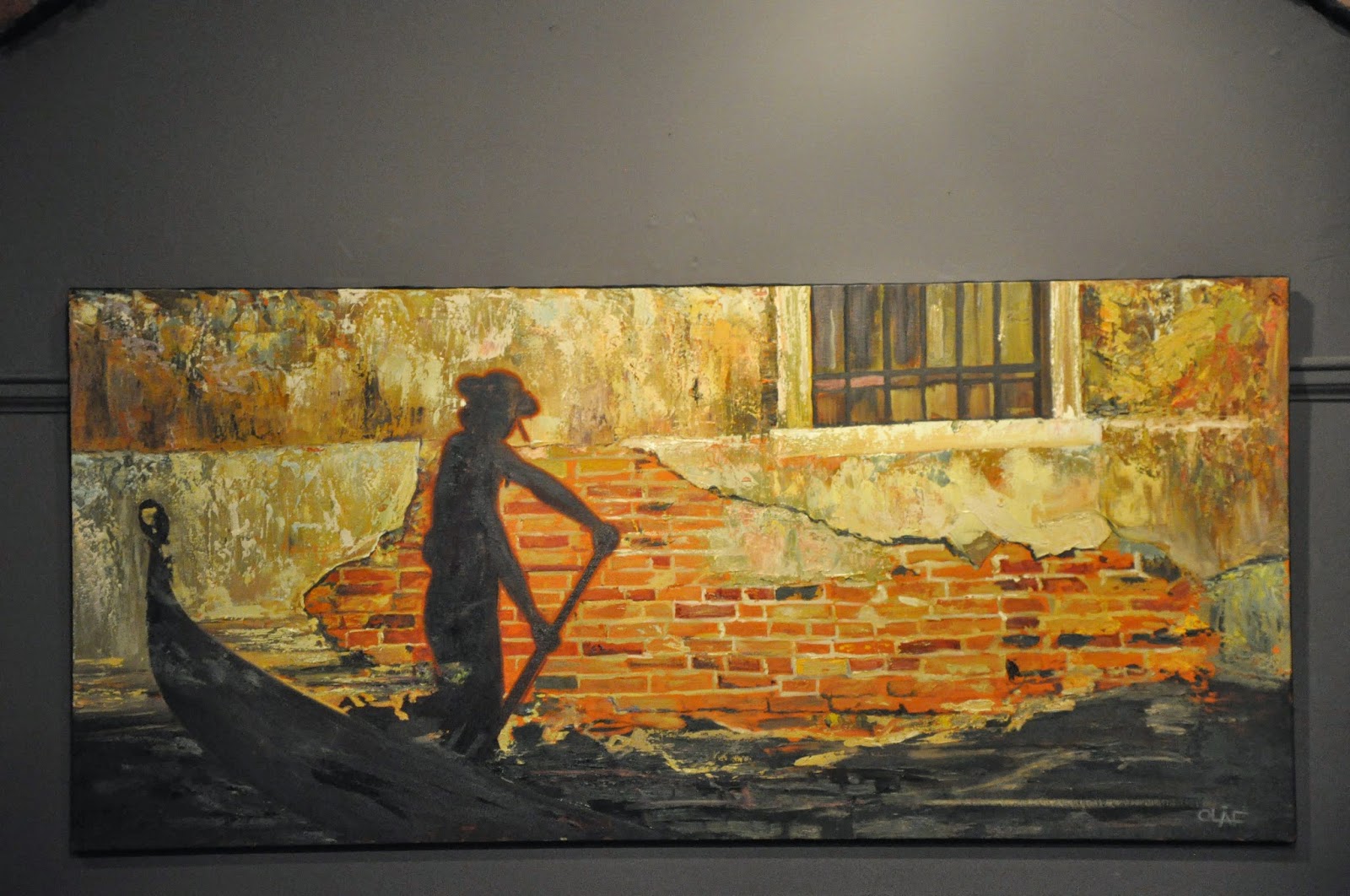 As we sipped our delicious lattés and enjoyed our vegan cookies, Mr. Harrison and his wife worked hard.  He took over the gallery from his father before him, and has weathered the changing economy to continue to provide beautiful art for those who find the time to visit his beautiful café and gallery.  He even took a minute, at my request, 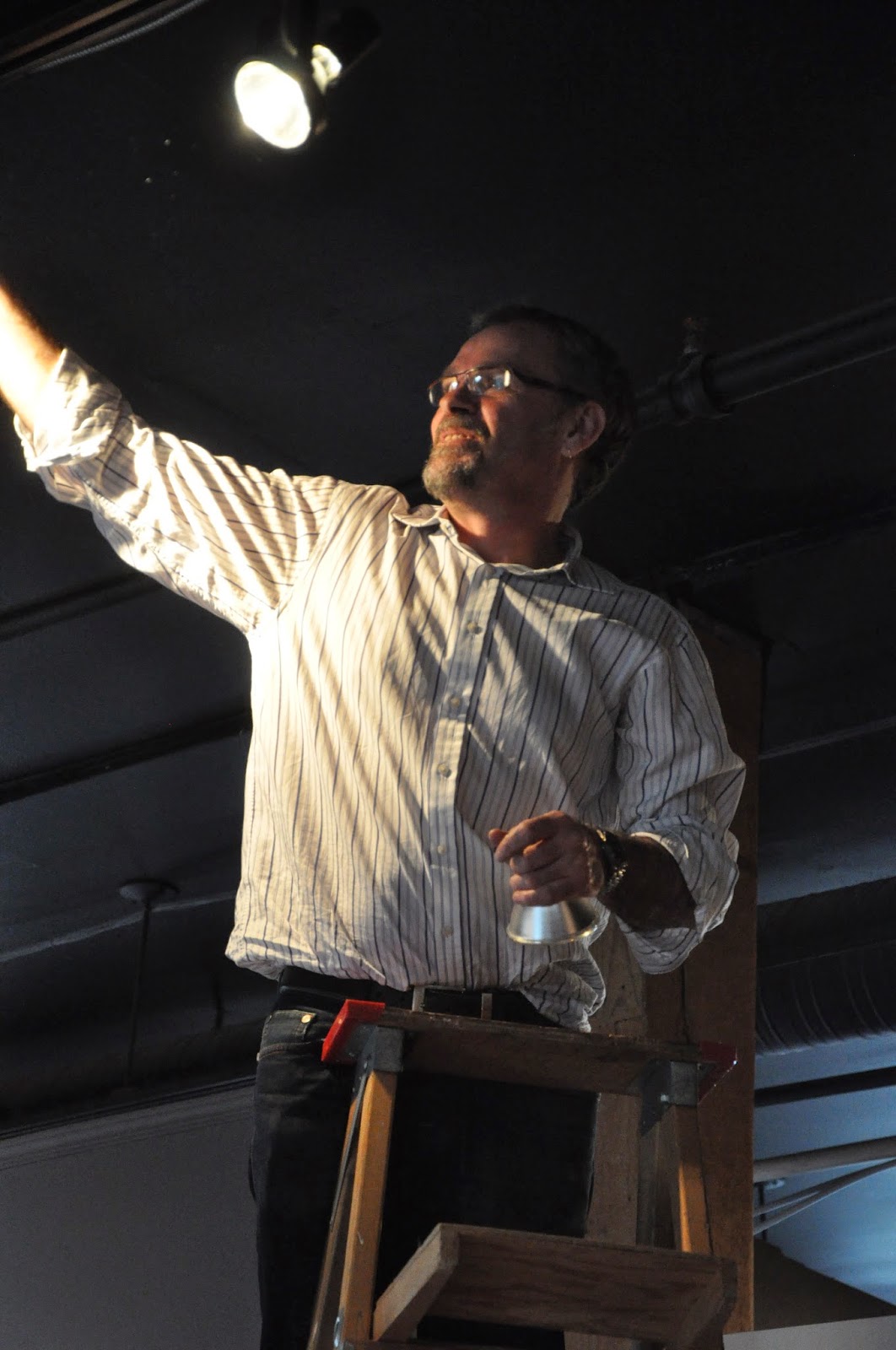 to turn the light on his face and smile for my camera :) 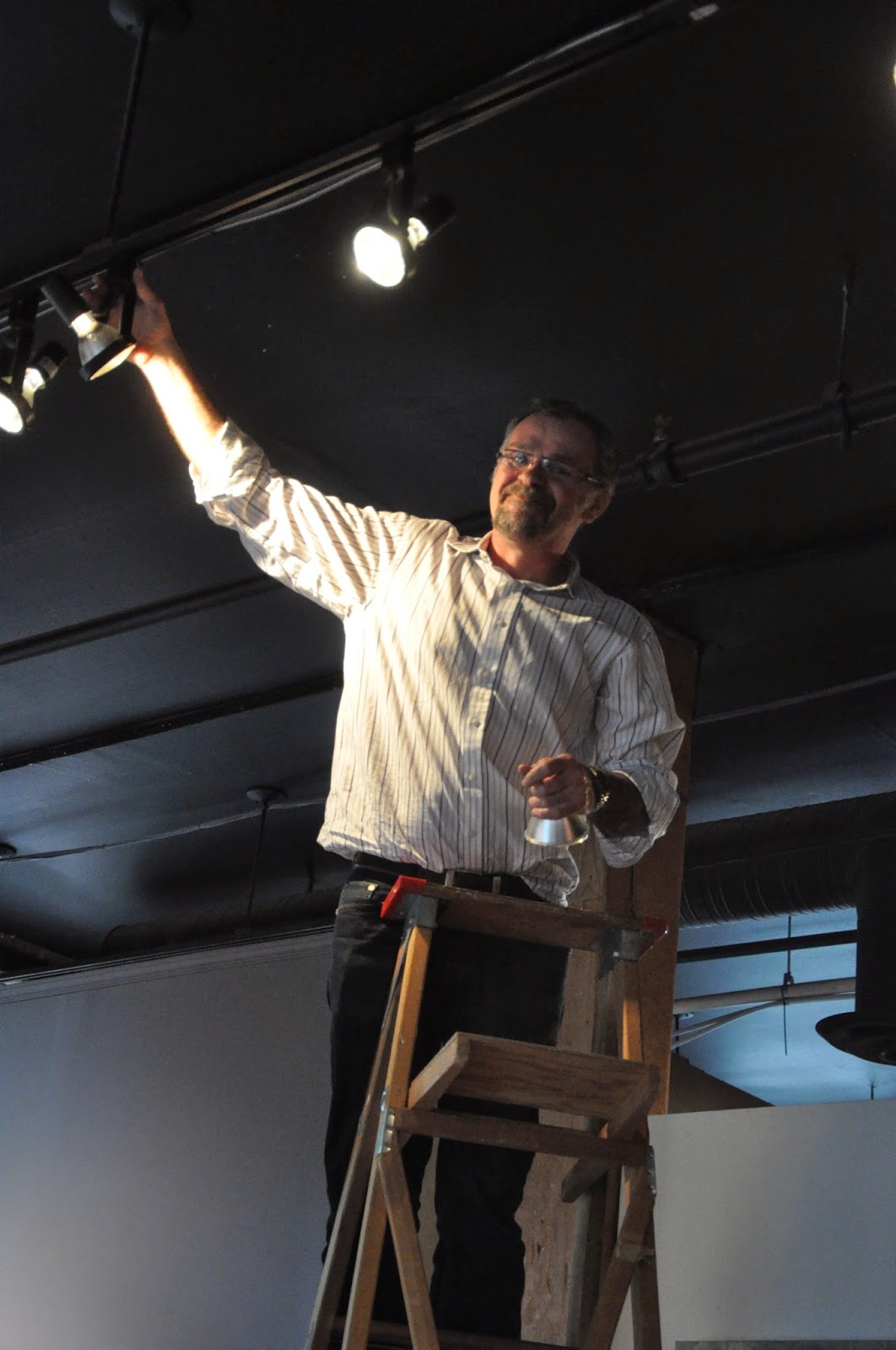 On the way home, we took a less-frequented path where Black Jack could have a little run. 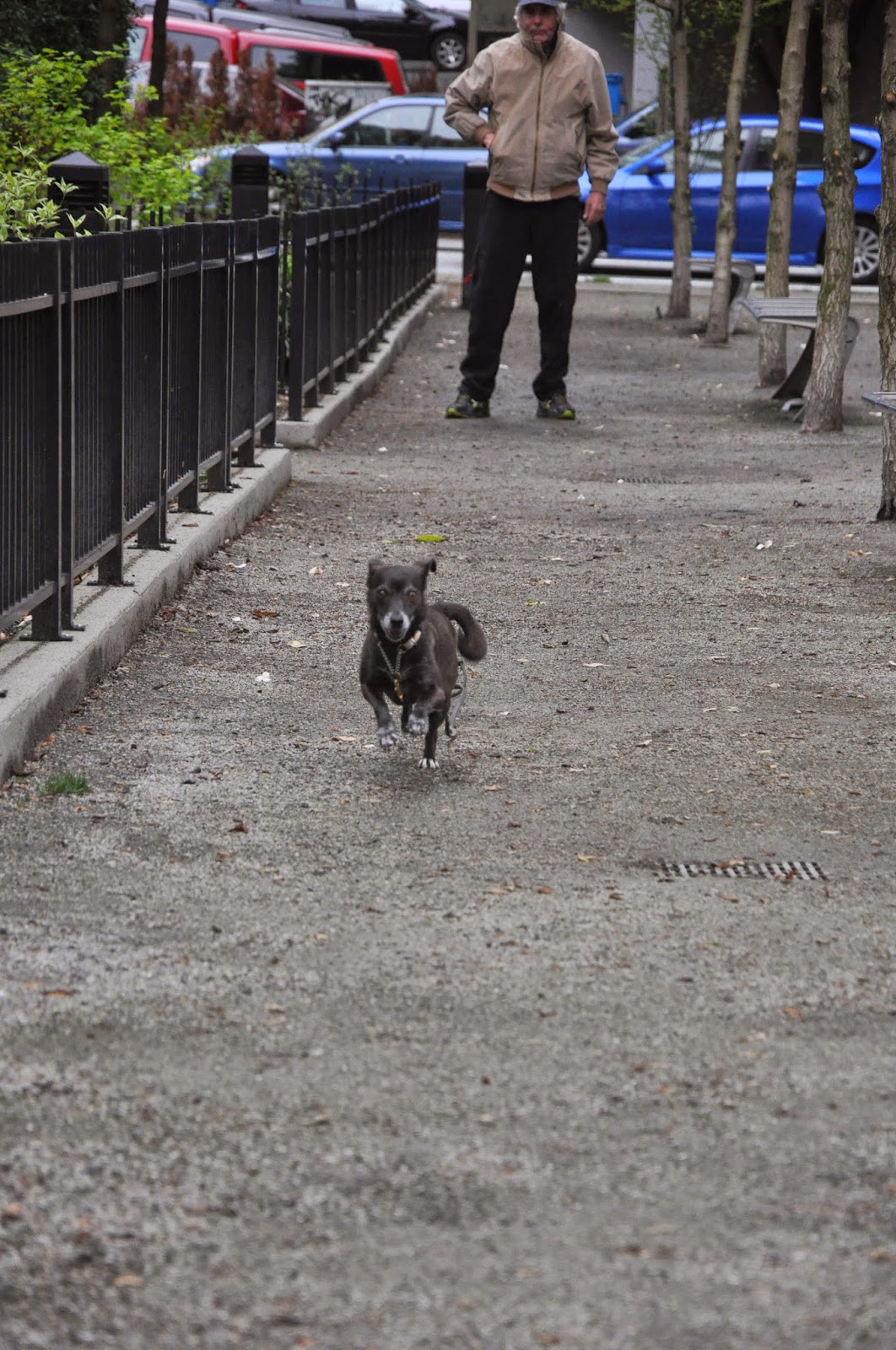 A moment to admire the tulips.. 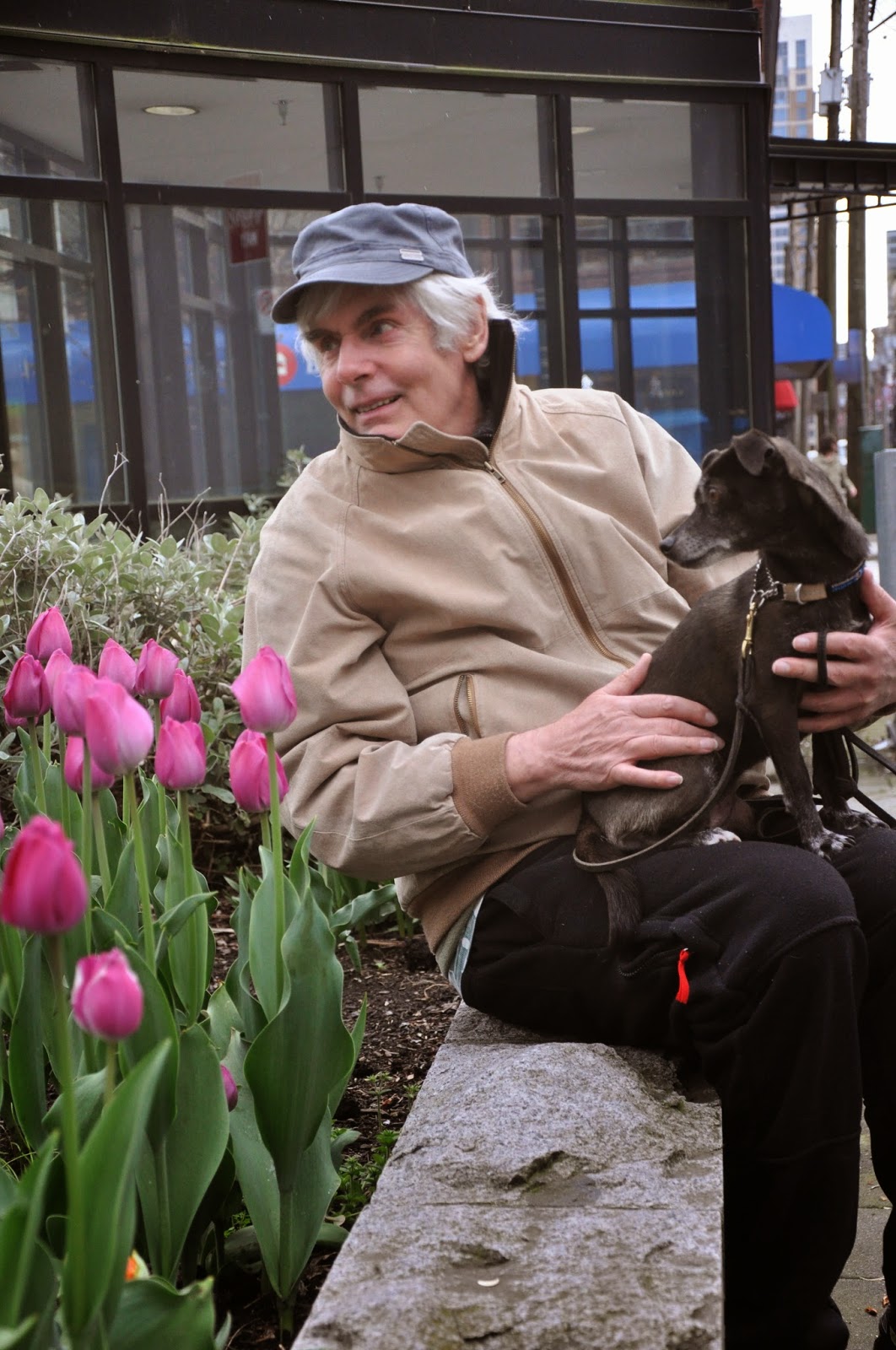 along with a couple of pretty pigeons, and we called it a good walk on Easter Sunday. 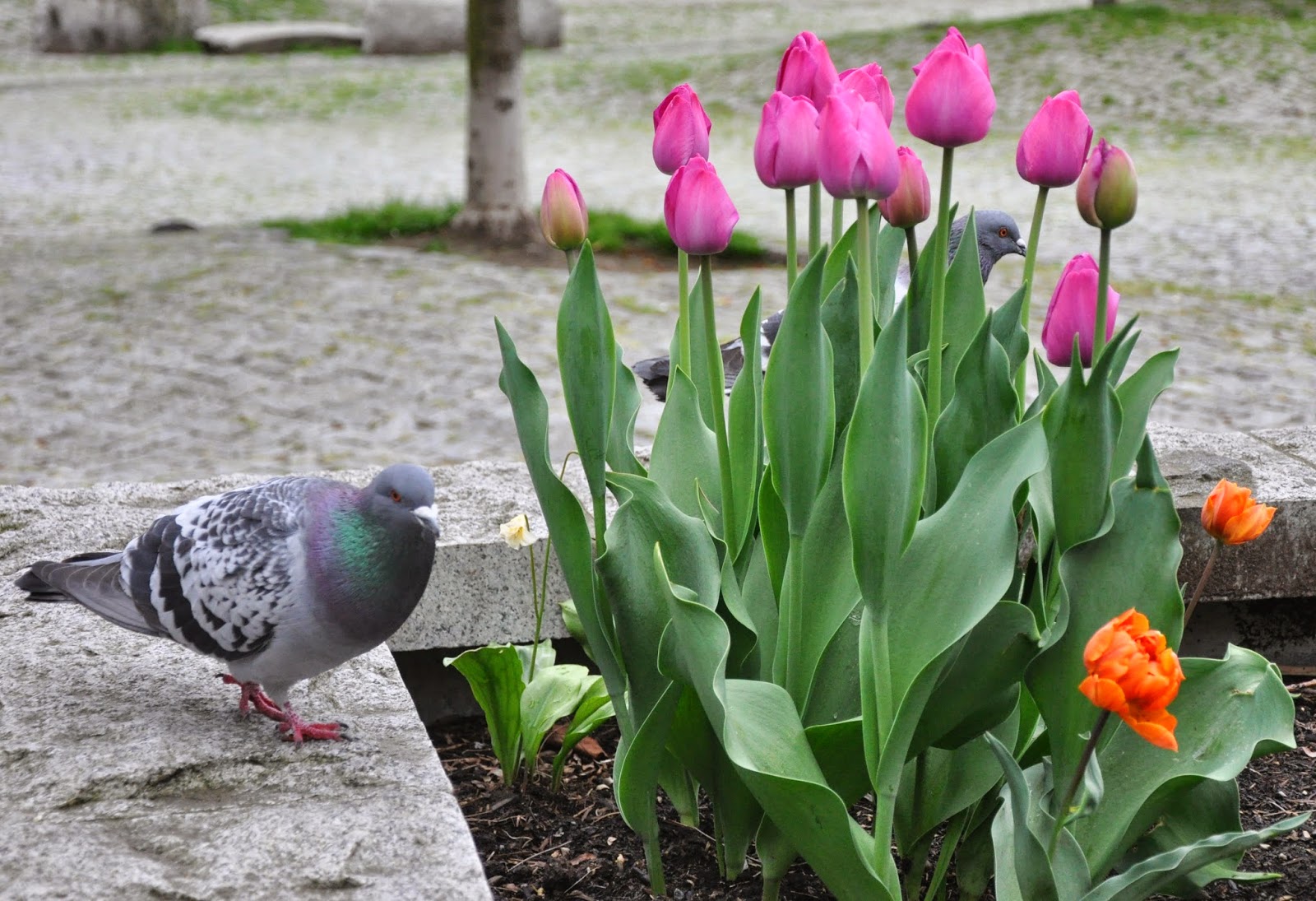 That was a portion of my world yesterday.  To have a glimpse into the lives of people around the world, perhaps you will find the time to check out a very successful meme called Our World Tuesday.  A huge thank you to the organizers who keep it running, and to you, for stopping by to share in my world.
Posted by Black Jack's Carol at 9:34 AM