Well, it's Saturday and it's Valentine's Day, so two topics, Eileen's Saturday's Critters and love, are on my mind.  Along with the usual comings and goings and thinkings of my life, I've turned to some voices from the past for a few ideas about love.

114
114
"There are only two people who can tell you the truth about yourself - an enemy who has lost his temper and a friend who loves you dearly." — Antisthenes
- See more at: http://www.1-love-quotes.com/quotes/category/Greek+Philosopher+Quotes#sthash.w4xvMlxj.dpuf
.

114
114
"There are only two people who can tell you the truth about yourself - an enemy who has lost his temper and a friend who loves you dearly." — Antisthenes
- See more at: http://www.1-love-quotes.com/quotes/category/Greek+Philosopher+Quotes#sthash.w4xvMlxj.dpuf
"Until one has loved an animal a part of one's soul remains unawakened."

Anatole France
On this Valentine's Day, I can't believe I don't have a new photo of Bill's face..  you can bet I'll fix that later today :)  In the mean time, the spirit of his nature can be felt here, as Black Jack sits on his lap, so comfortably settled that the little heart he had placed there remained still enough for long enough to catch the photo :) 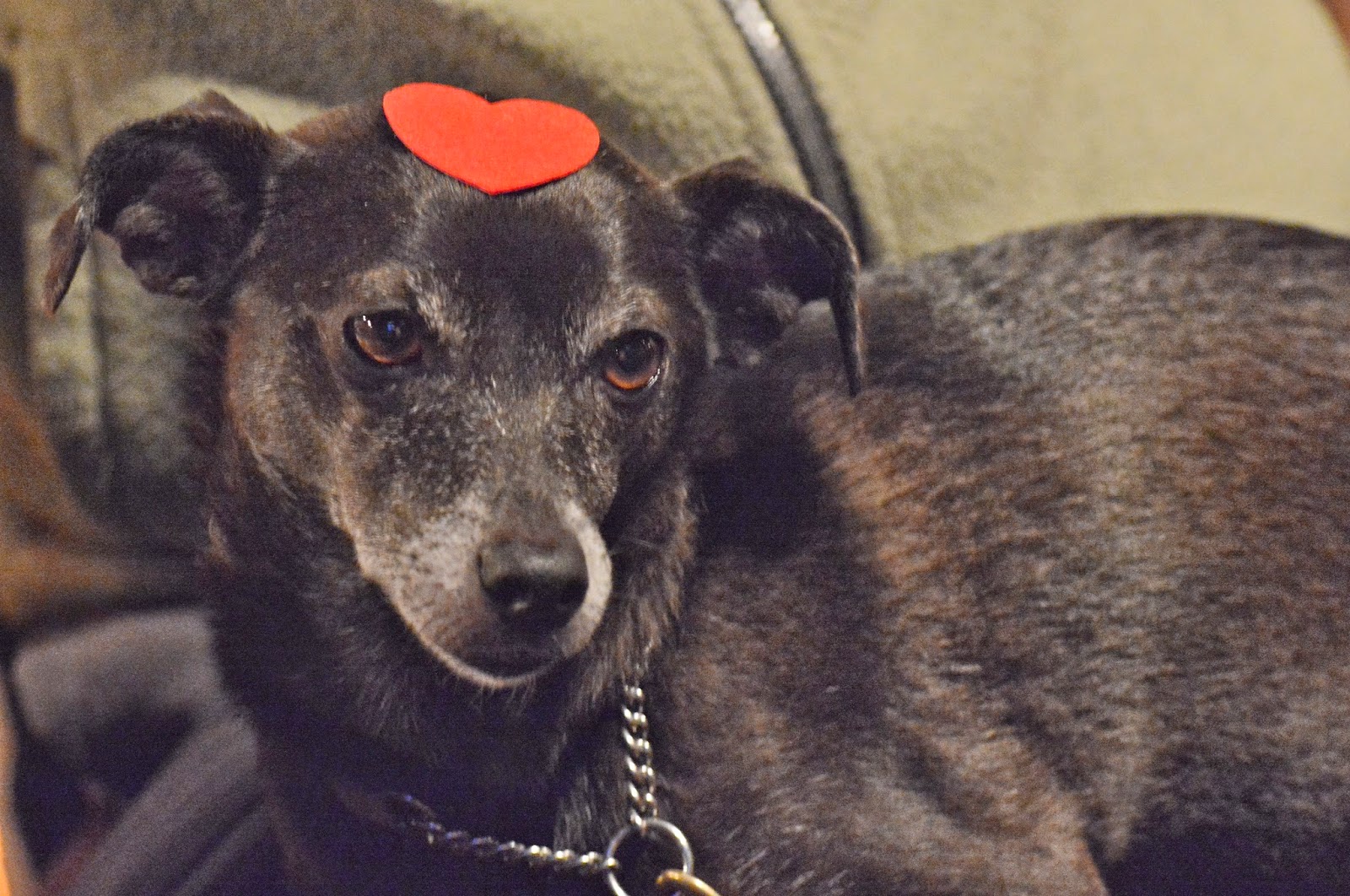 In fact, he was by my side, throughout every single photo you see here.  I guess that's my idea of love, but here is a thought attributed to Antisthenes.

"There are only two people who can tell you the truth about yourself - and enemy who has lost his temper and a friend who loves you dearly."

There's a kind of love that we feel every time we go to the café at Harrison Galleries.  It is genuine and it is so very much appreciated.   On Thursday, the staff had place extra decorations on the lattés.  They were decals with a removable cover on the back so that we could keep them, but we chose to enjoy the thought, record the moment in photographs, and then return them, so that the love could reach just a few more people. 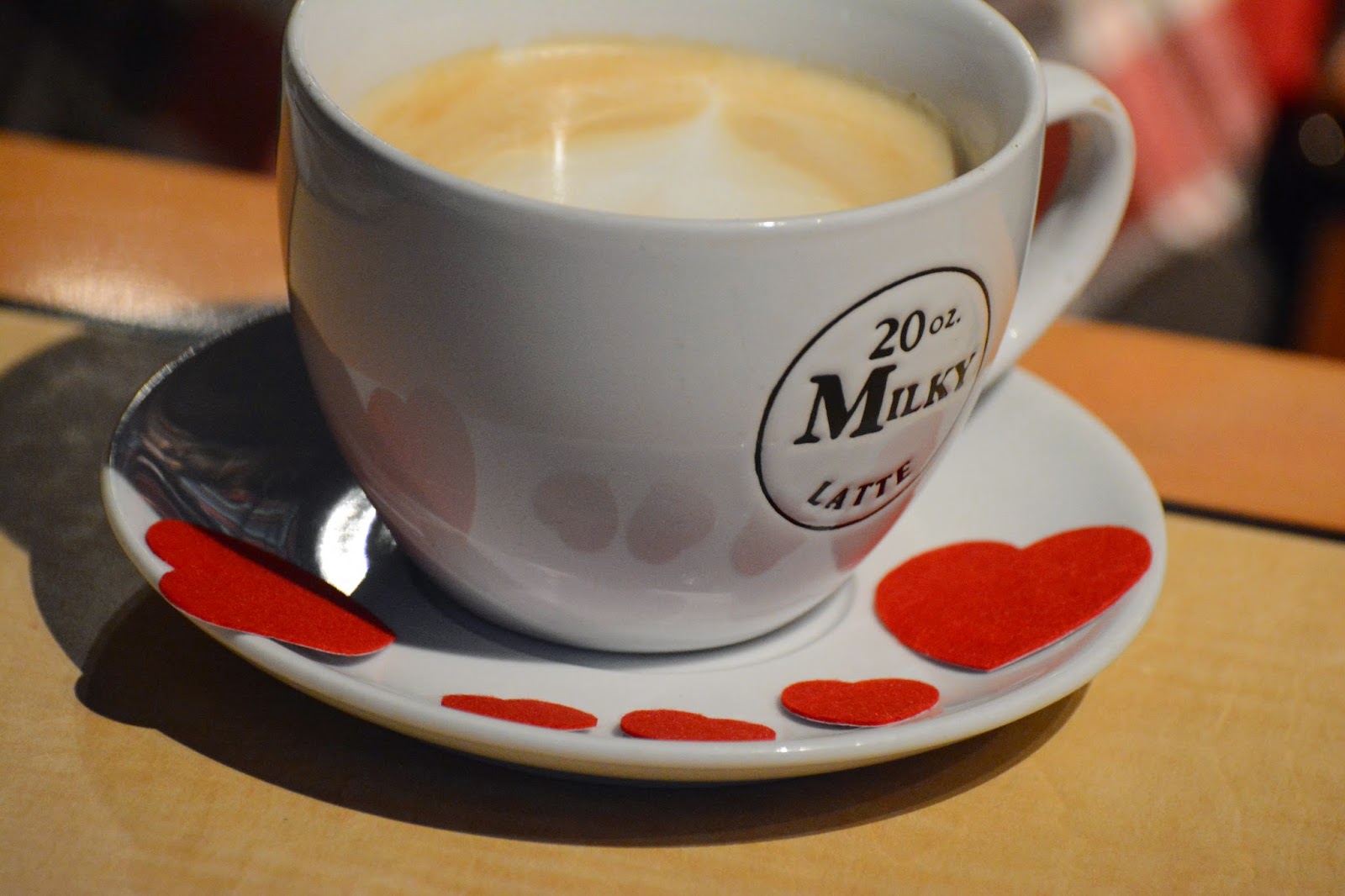 Bill helped with the presentations, 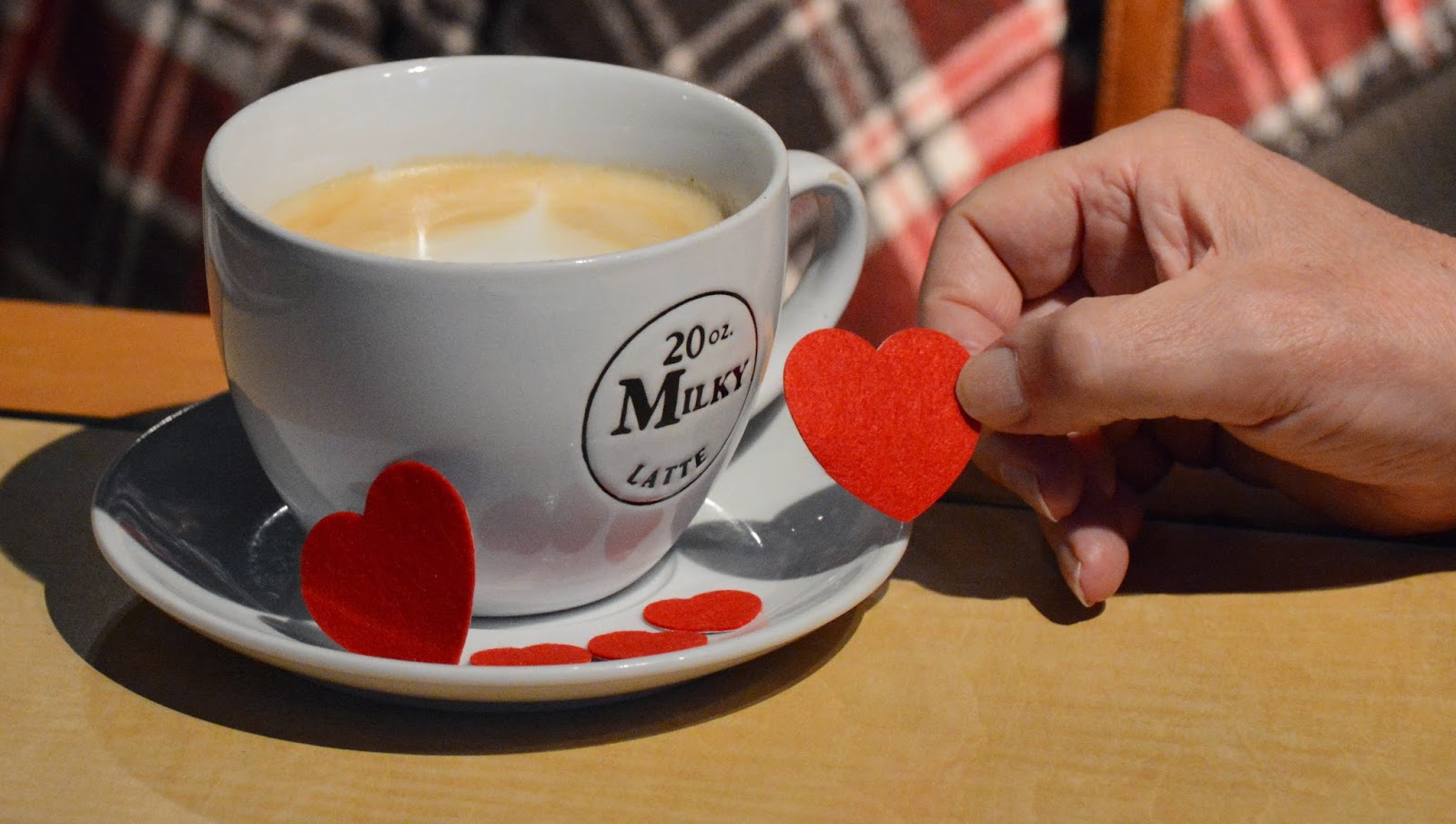 and of course, his sense of humor came into play, just one of the reasons why I love him. 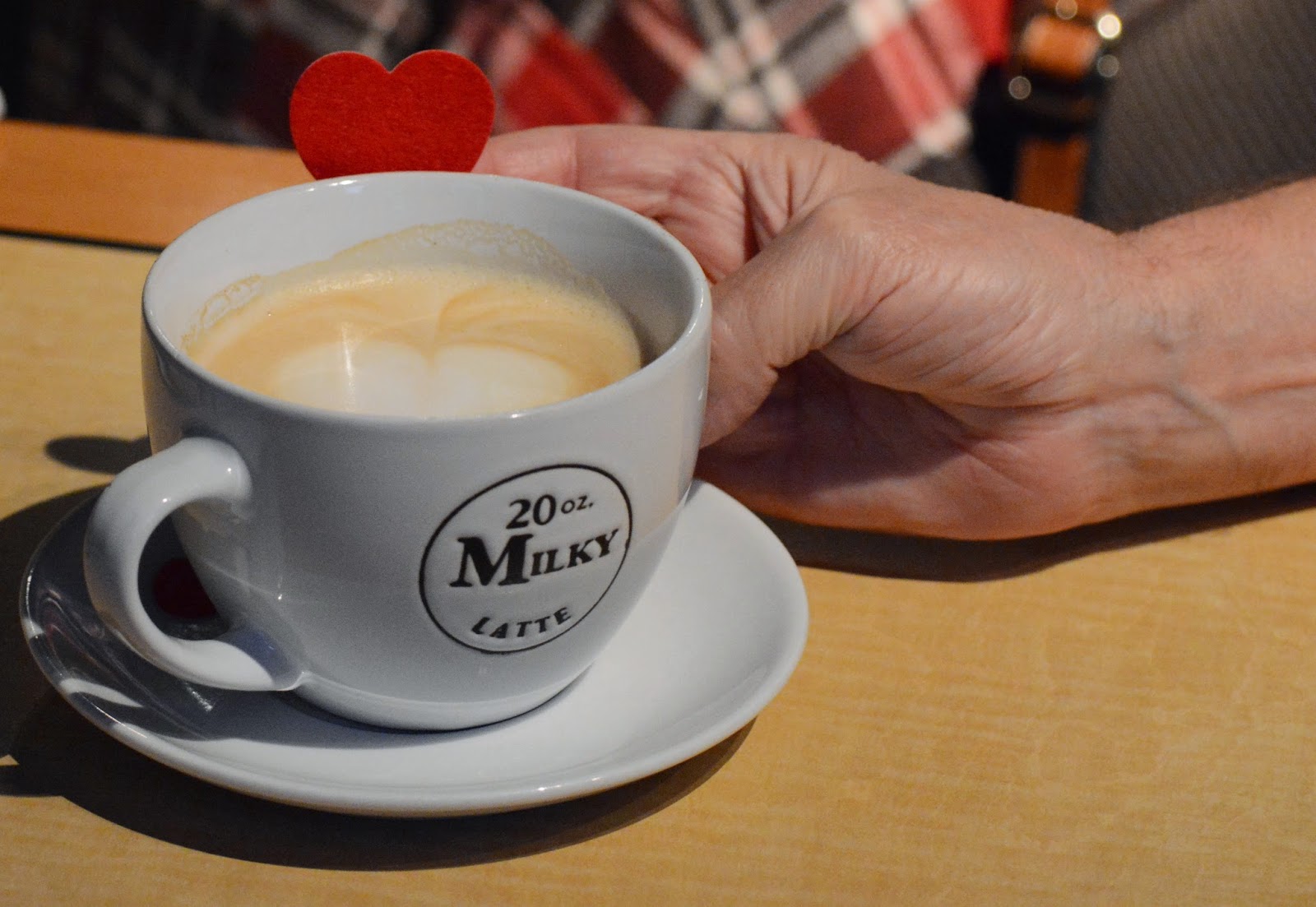 As we were playing with our hearts :) Genny came by with a tray full of dishes.  She had time to send a great big smile our way.  She was brimming over with excitement and happiness that Valentine's Day was approaching.  Her smiles make the world a better place. 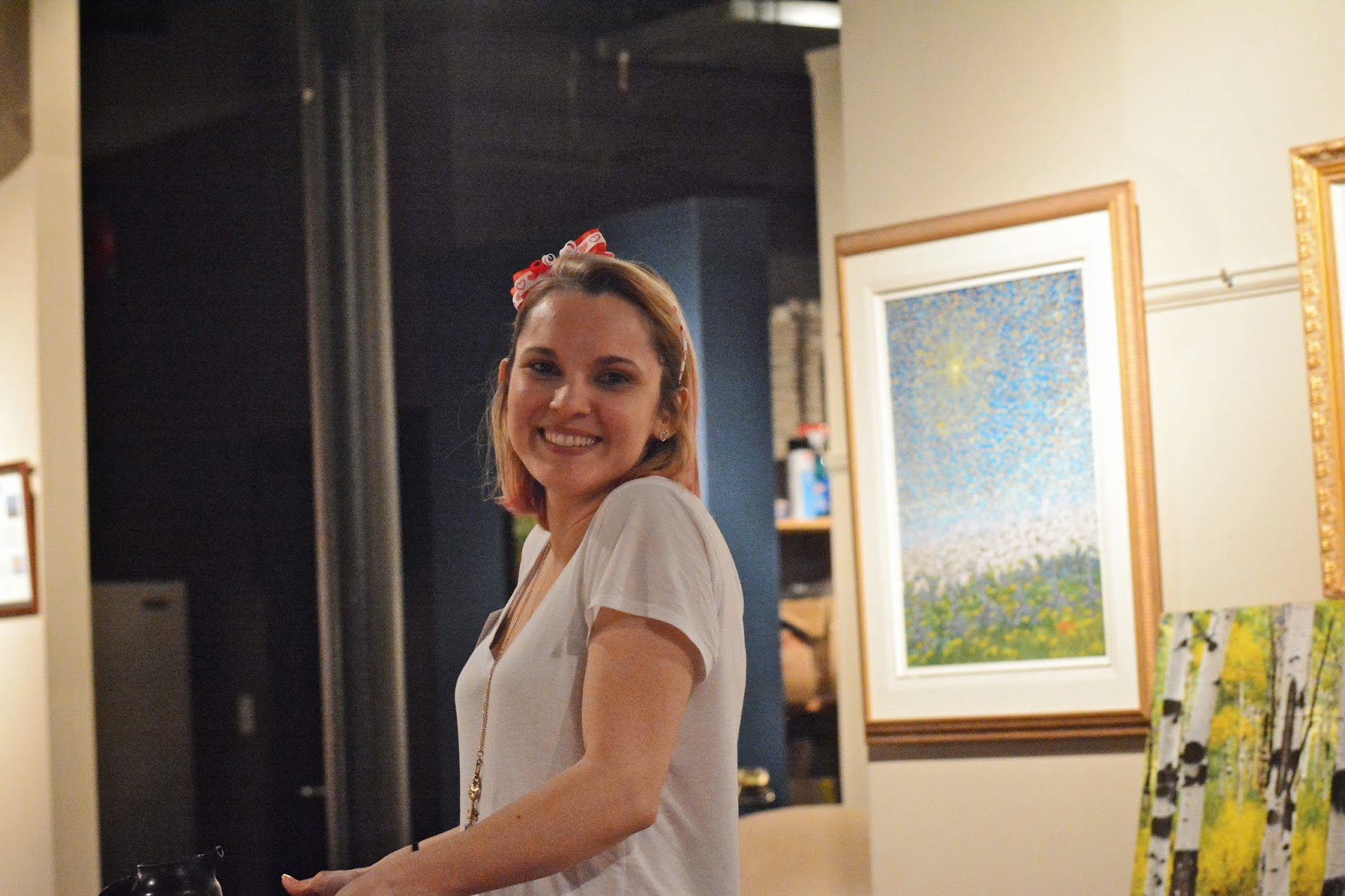 One last quote on the topic of love, this one by the Dalai Lama, someone whose gentle nature inspires me.  If this thought were to take over the world, peace would follow:

"Because we all share an identical need for love, it is possible to feel that anybody we meet, in whatever circumstances, is a brother or sister. No matter how new the face or how different the dress and behavior, there is no significant division between us and other people. It is foolish to dwell on external differences, because our basic natures are the same."

A seagull on the Inukshuk be English Bay.. 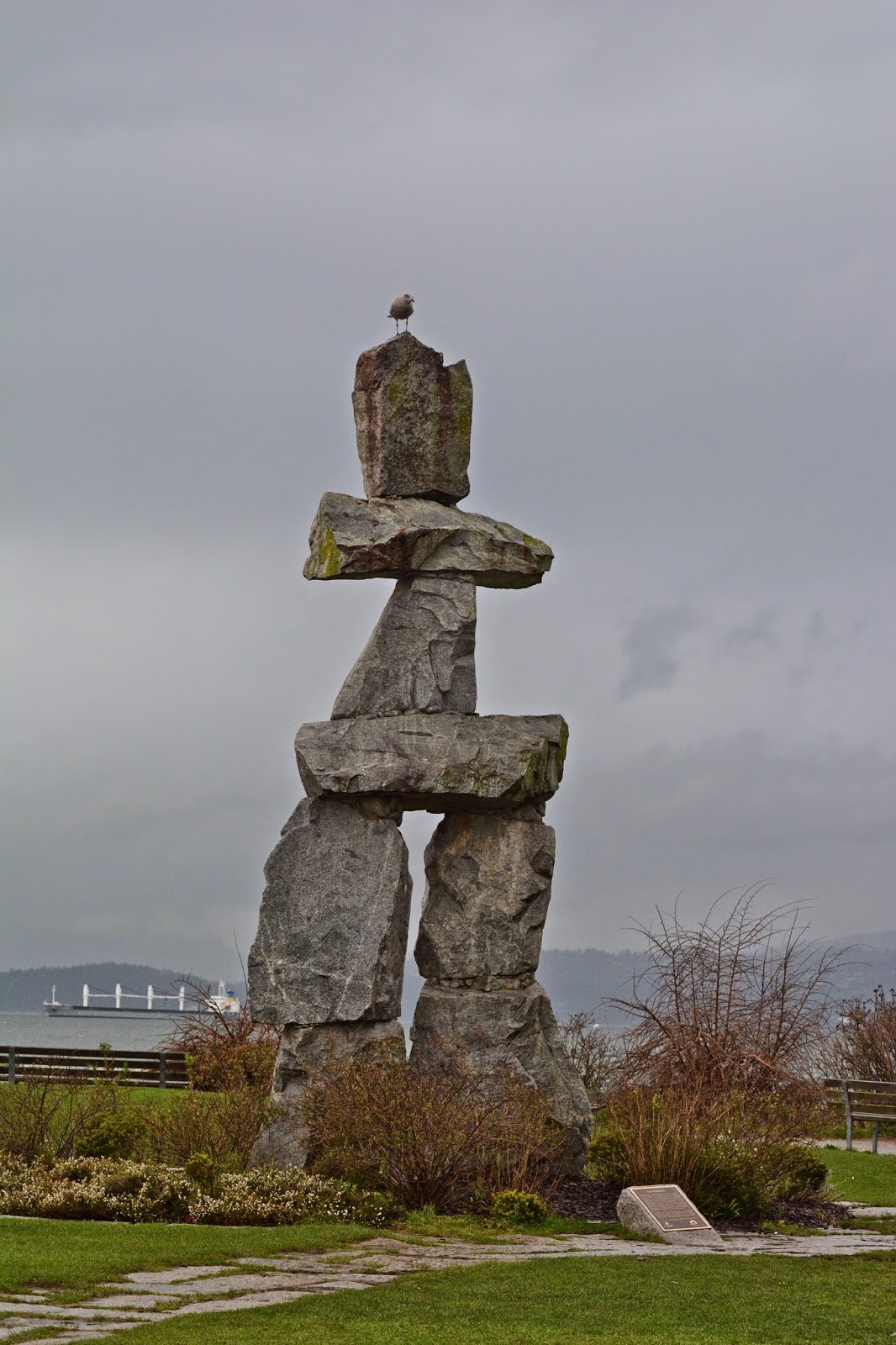 had a story to tell. 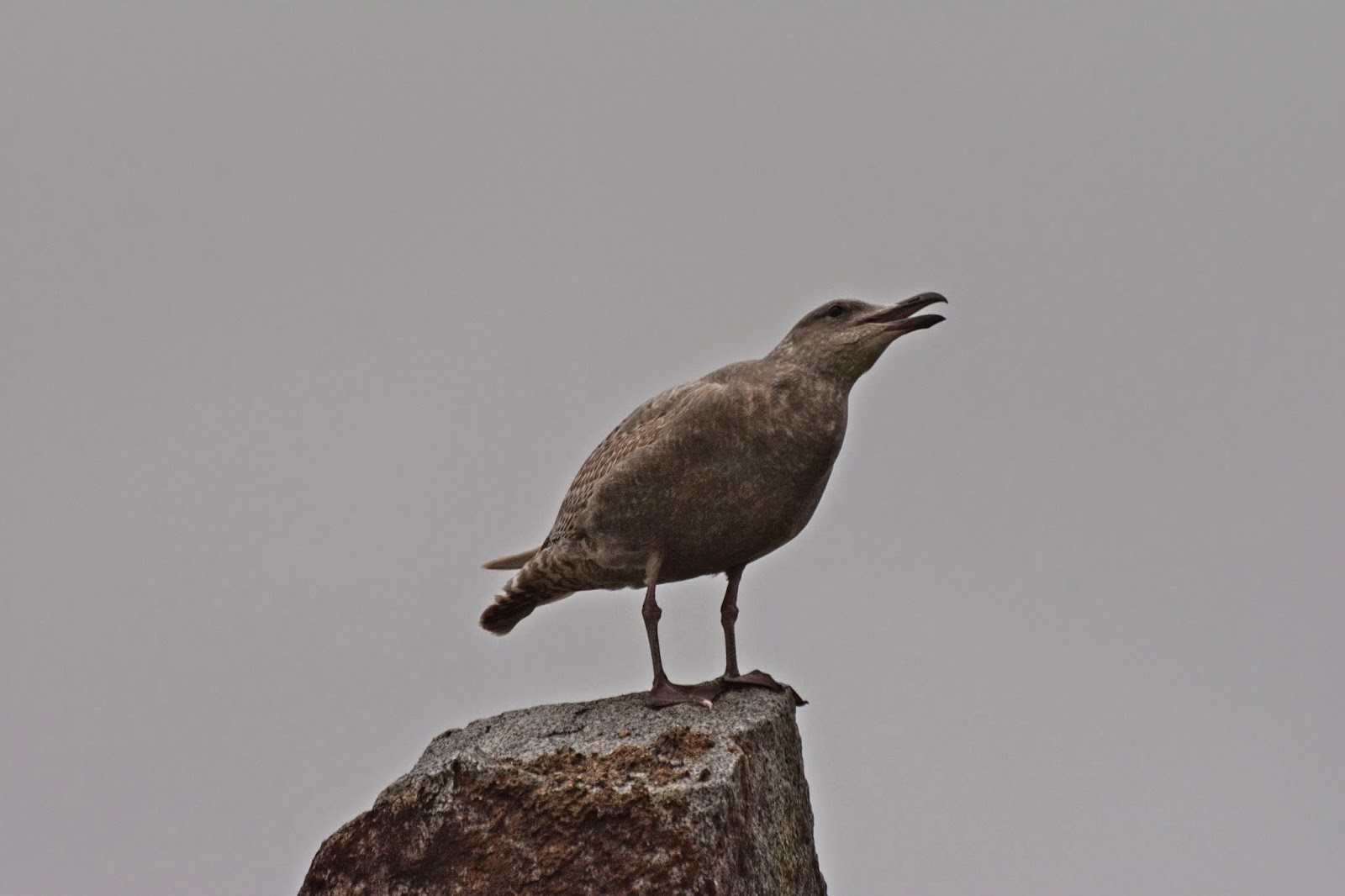 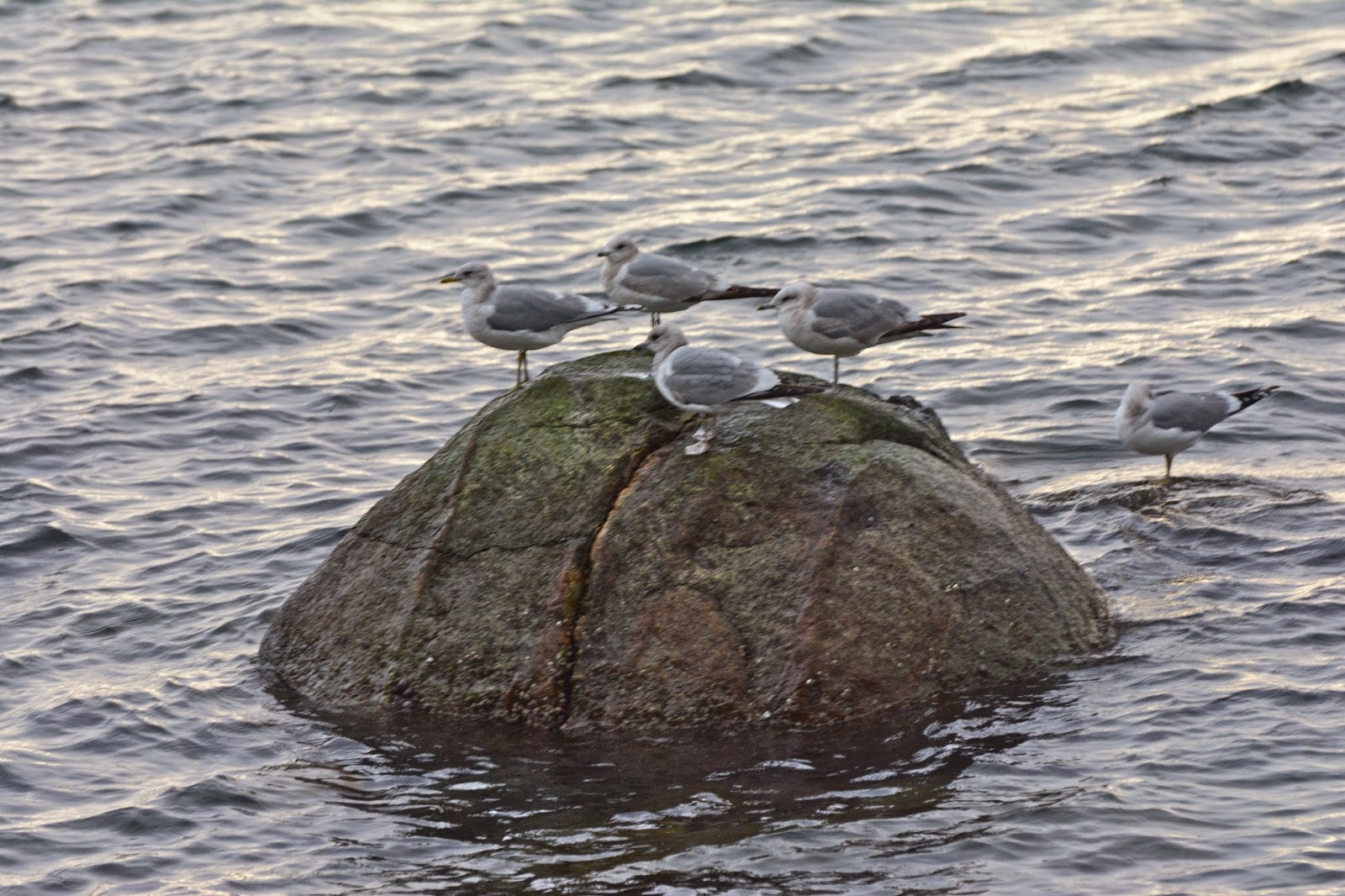 A Barrow's Goldeneye pair showed me their left side.. 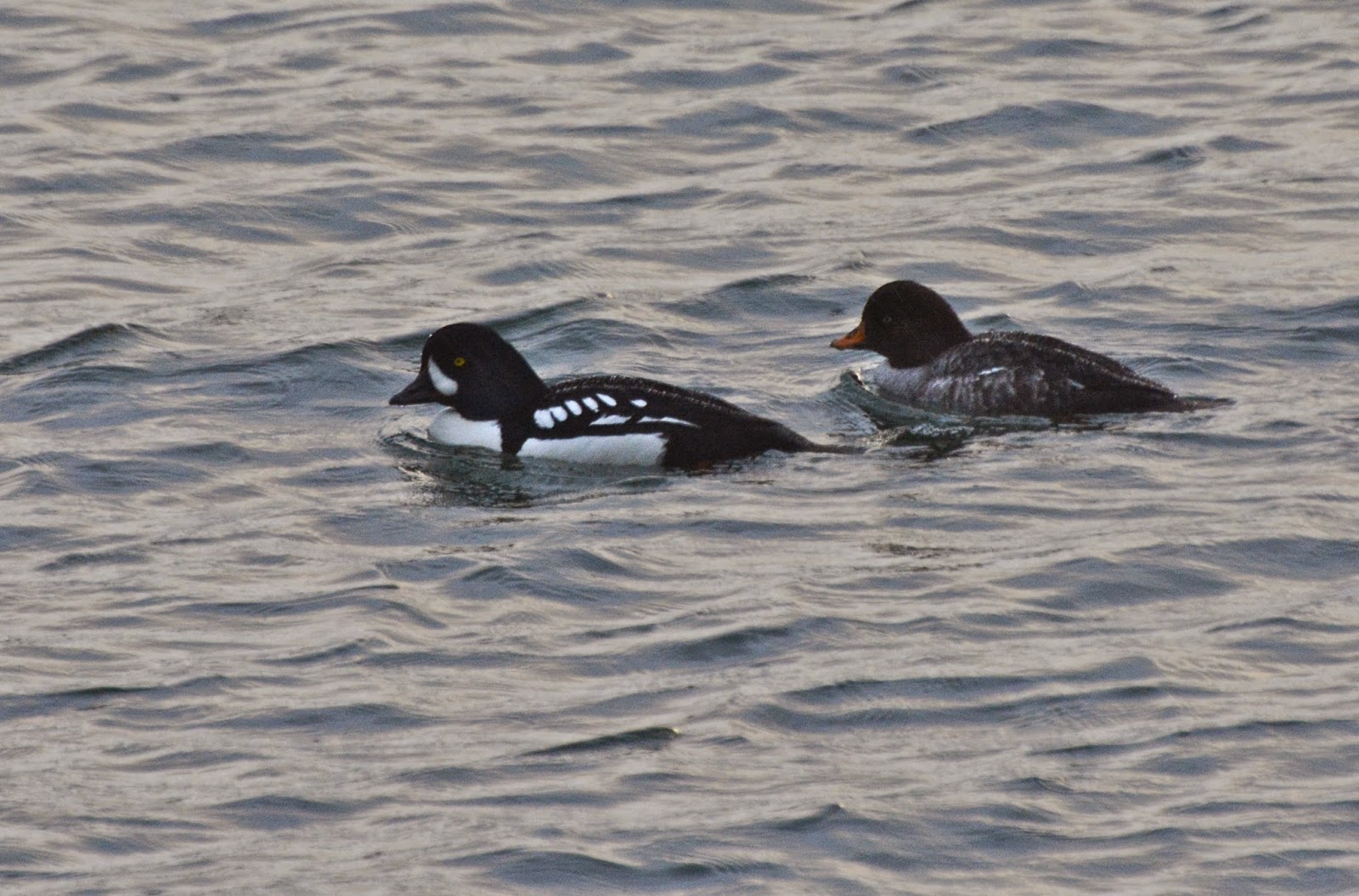 and then their right. 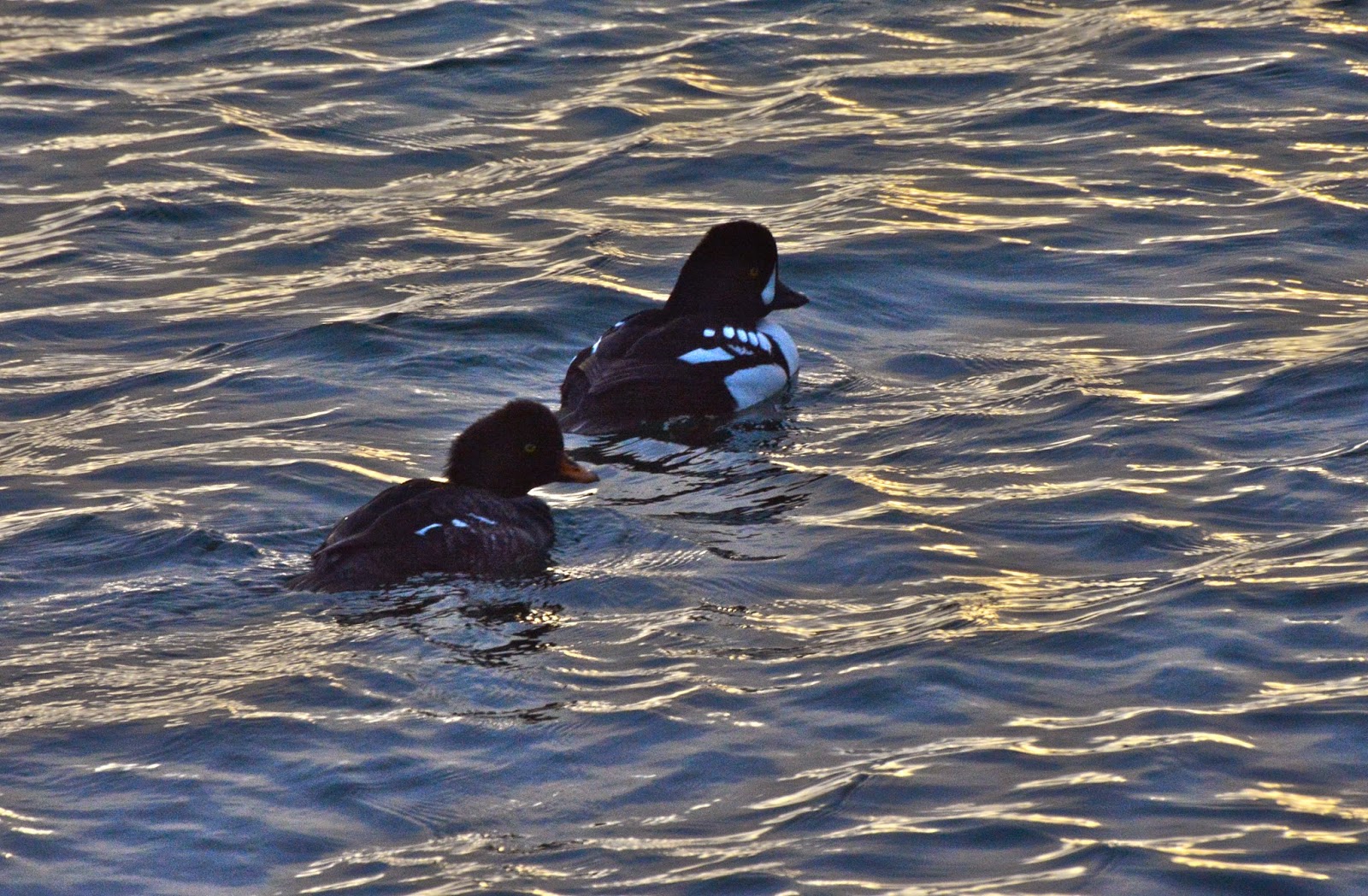 A Bush Tit caught the last rays of sun.. 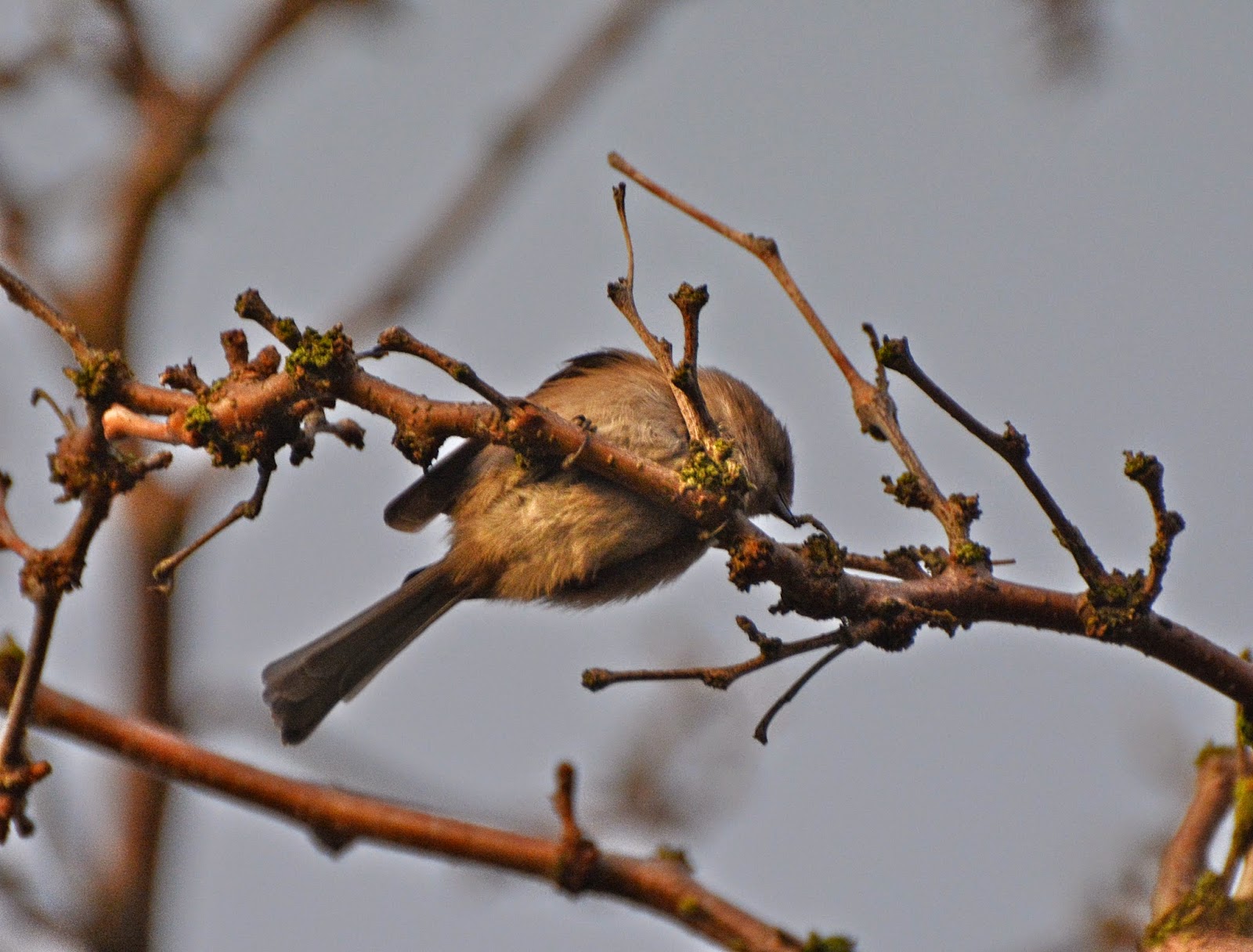 so Bill pulled my the camera out of the bag and passed it to me, even though it had been put away, and we were just about to get back on our bikes.  Yup, that's love :) 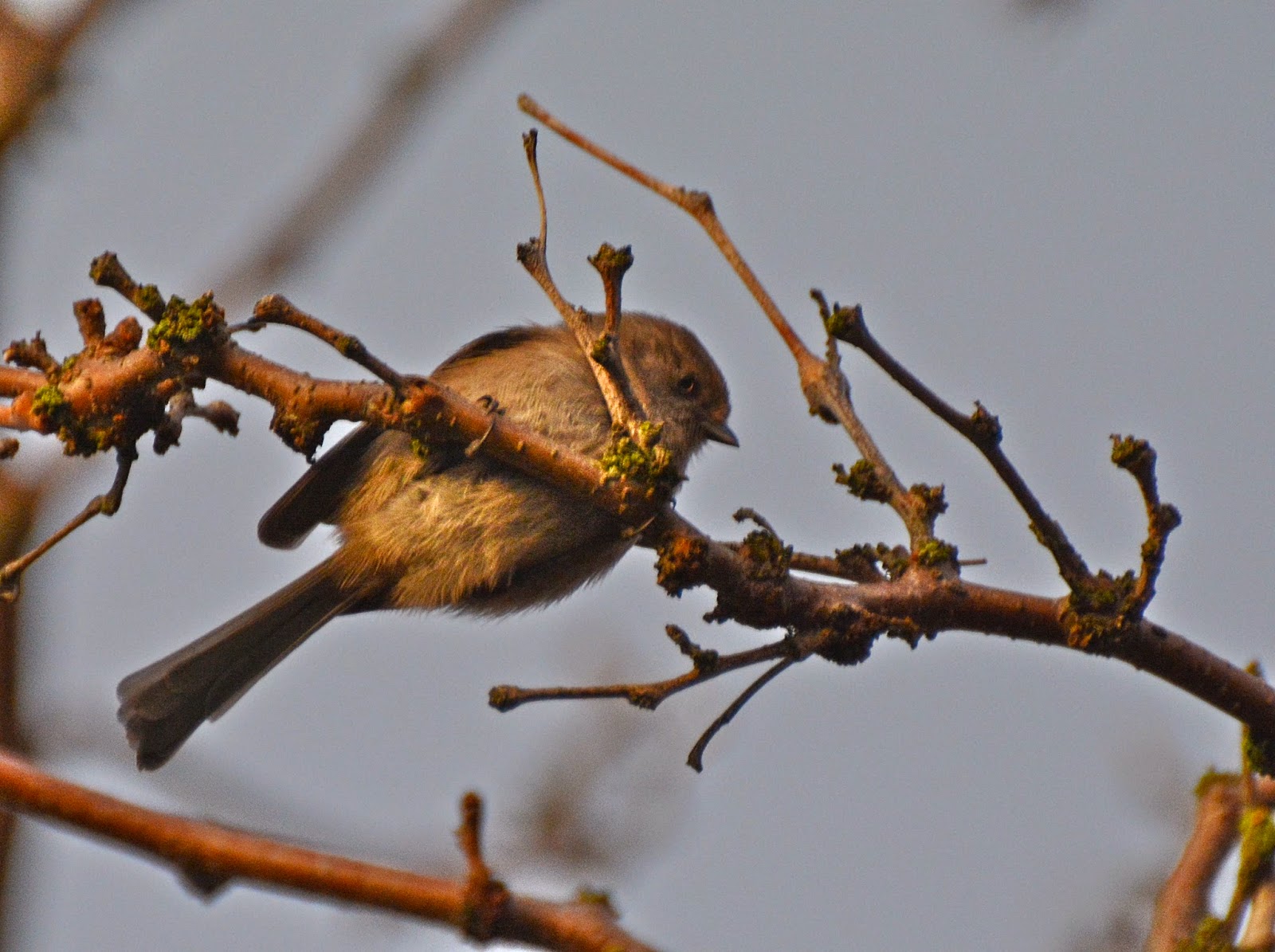 Black Jack caught a bit of that light as well. 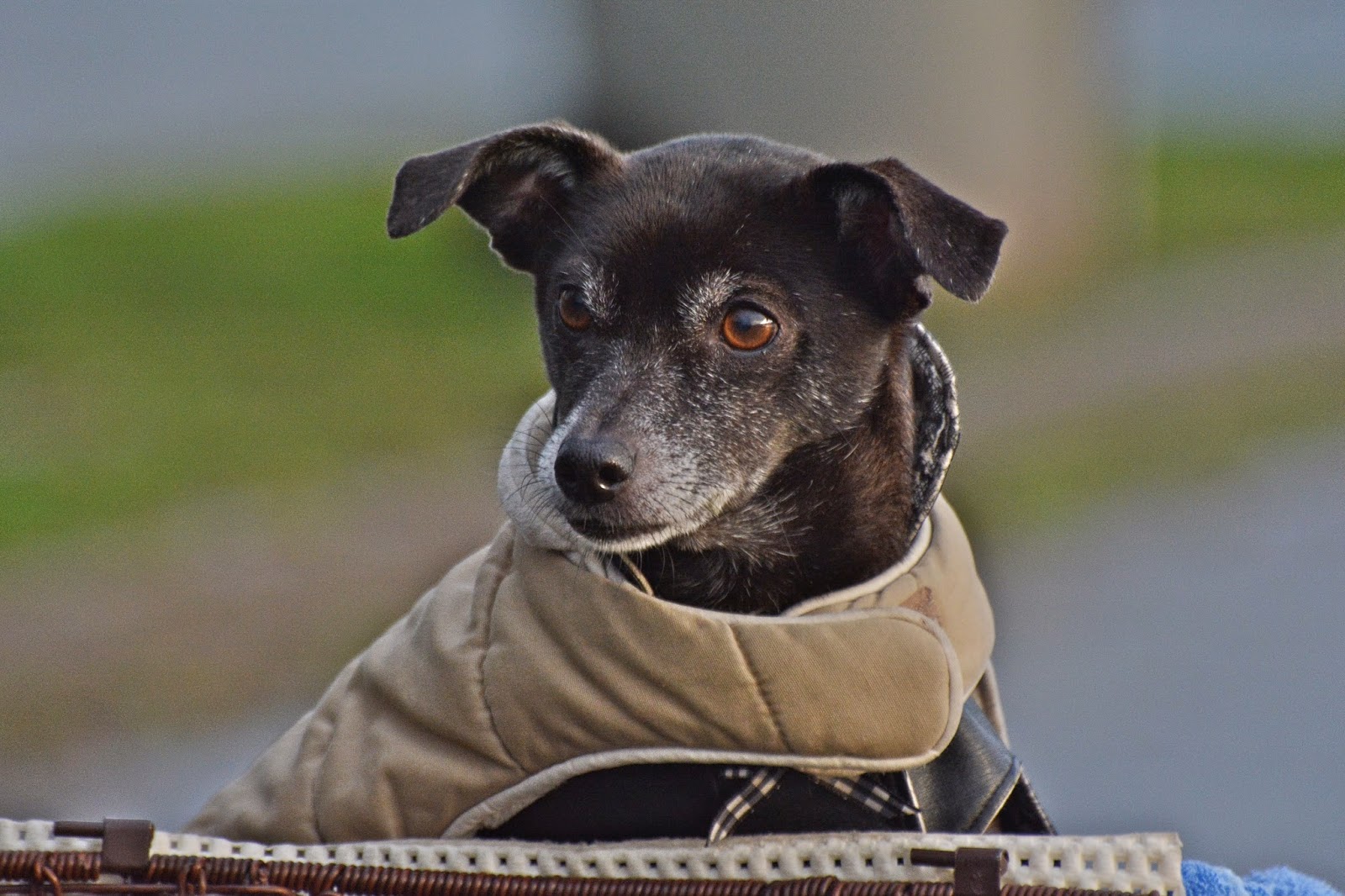 I took this screen shot of Justin Kauflan and his seeing eye dog, Candy, when we watched the movie, Keep On Keeping On.  There was so much love communicated in that film, it would take far more space than I have here to describe it.  Justin has just released a new album and I'm happy to report that Candy joins him on the front cover.  A sad update discovered at Justin's facebook site is that his mentor and beloved friend, Clark Terry, had to go into hospice care two days ago.  I know the love for Clark Terry felt by everyone fortunate enough to know him will "keep on" enriching the world far into the future. 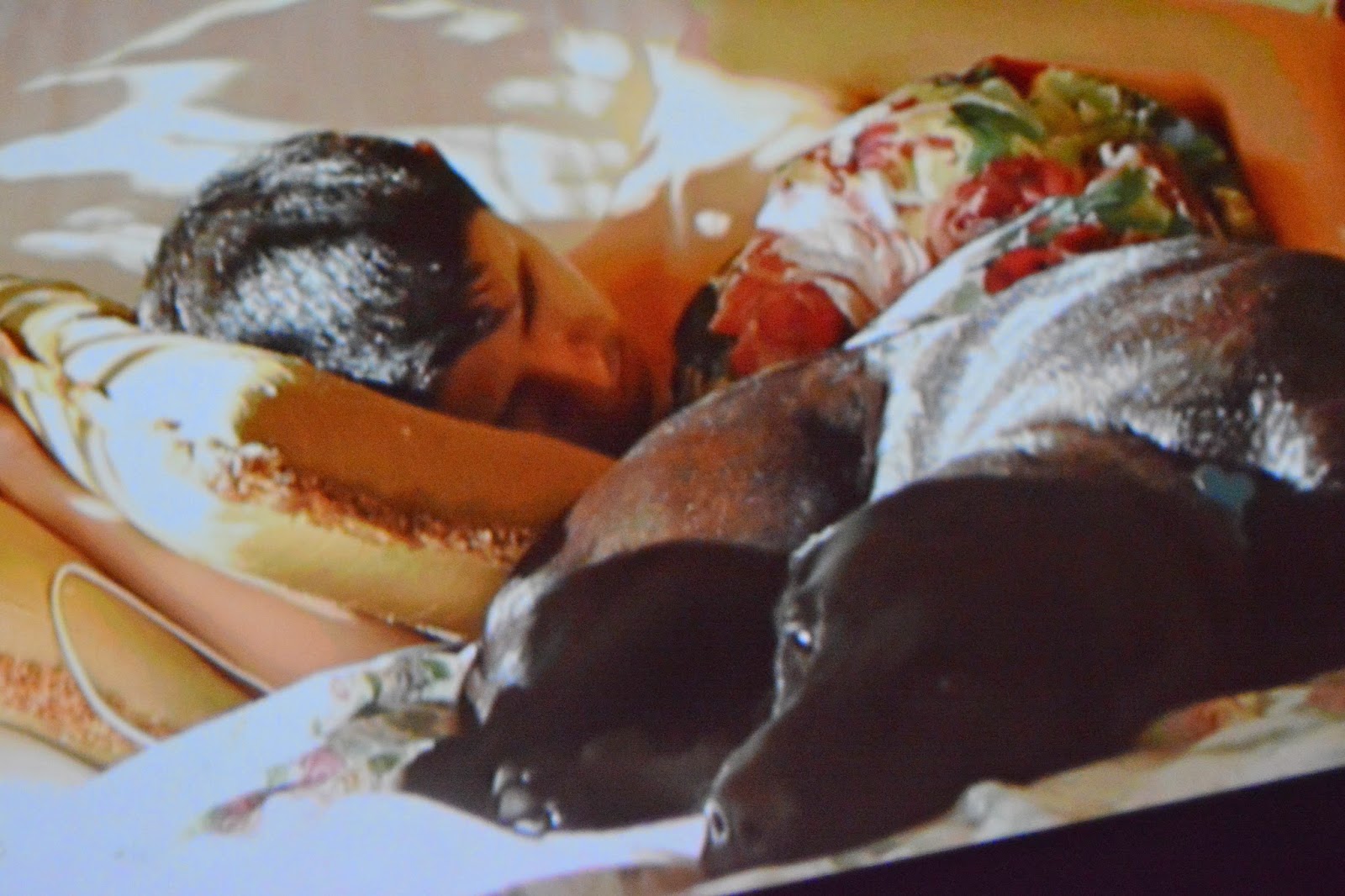 When Bill and I biked over the Lions Gate Bridge the other day, we heard a Flicker calling loudly from the top of a very tall tree, just as we arrived in North Vancouver.  It wasn't.. 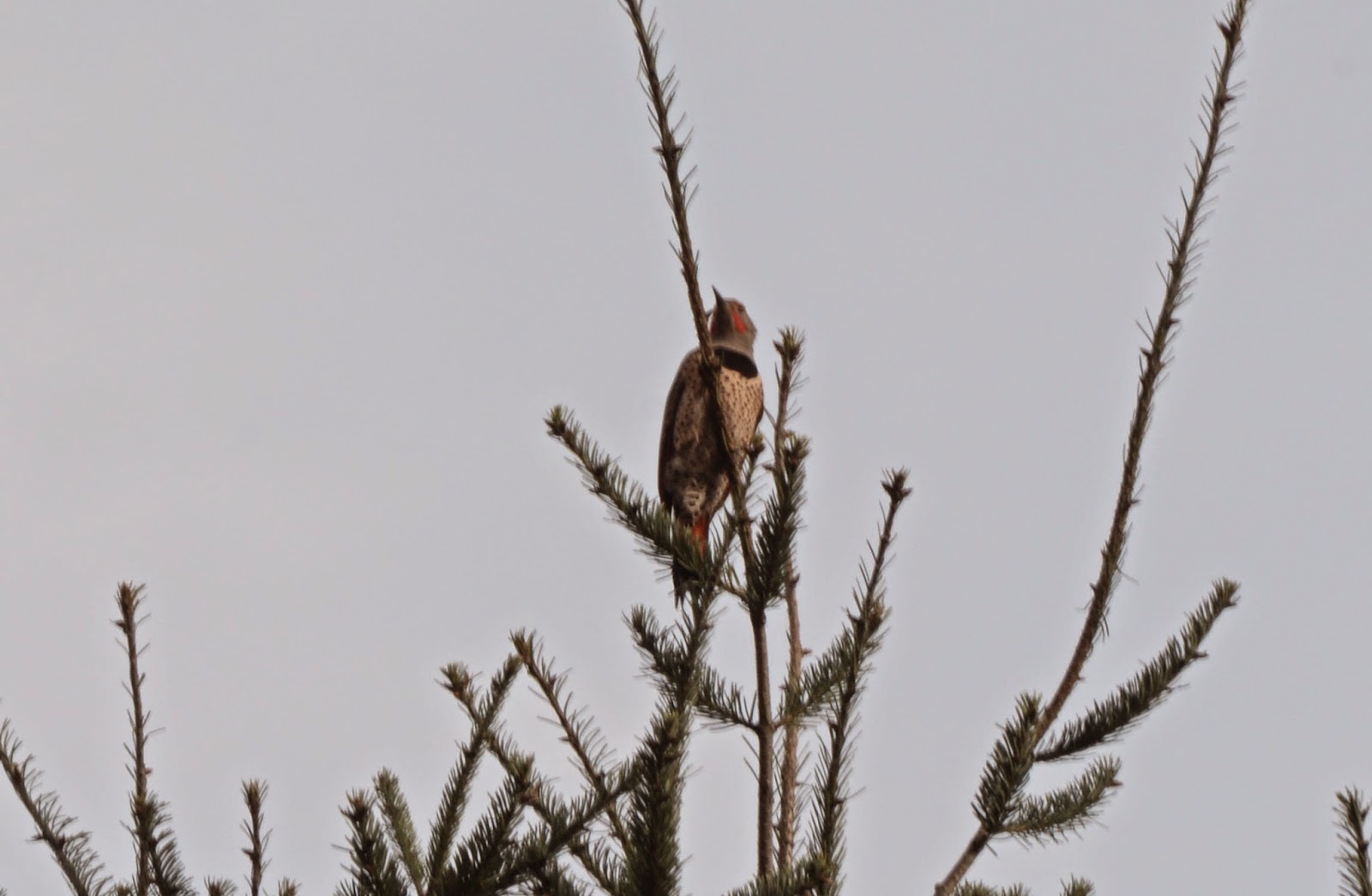 a perfect shot but it sure was a perfect moment :) 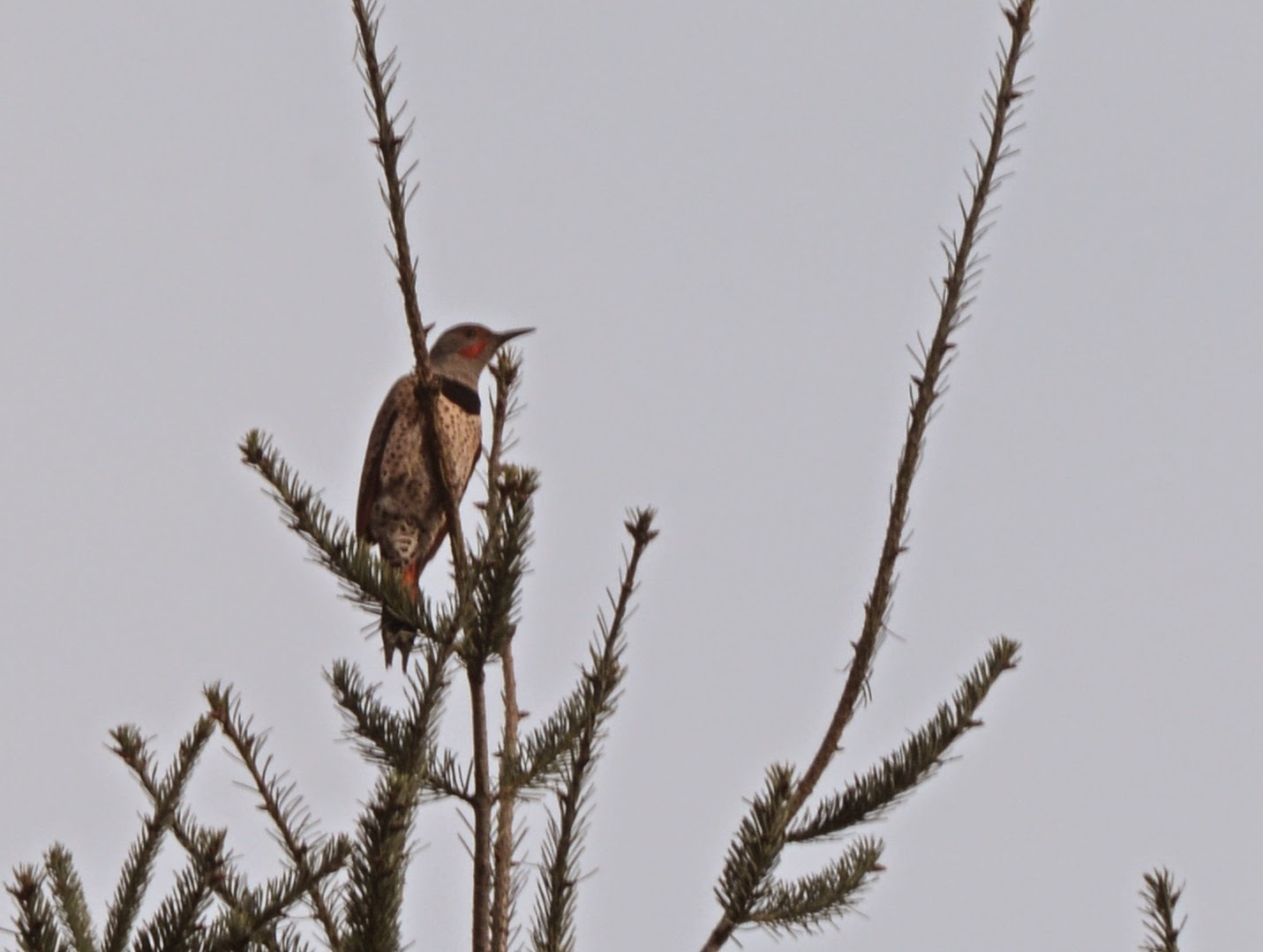 These last photos were taken in Olympic Village Park near the Cambie Bridge.  Bill spotted this hummingbird.  I had just enough time for a quick shot and then it was gone. 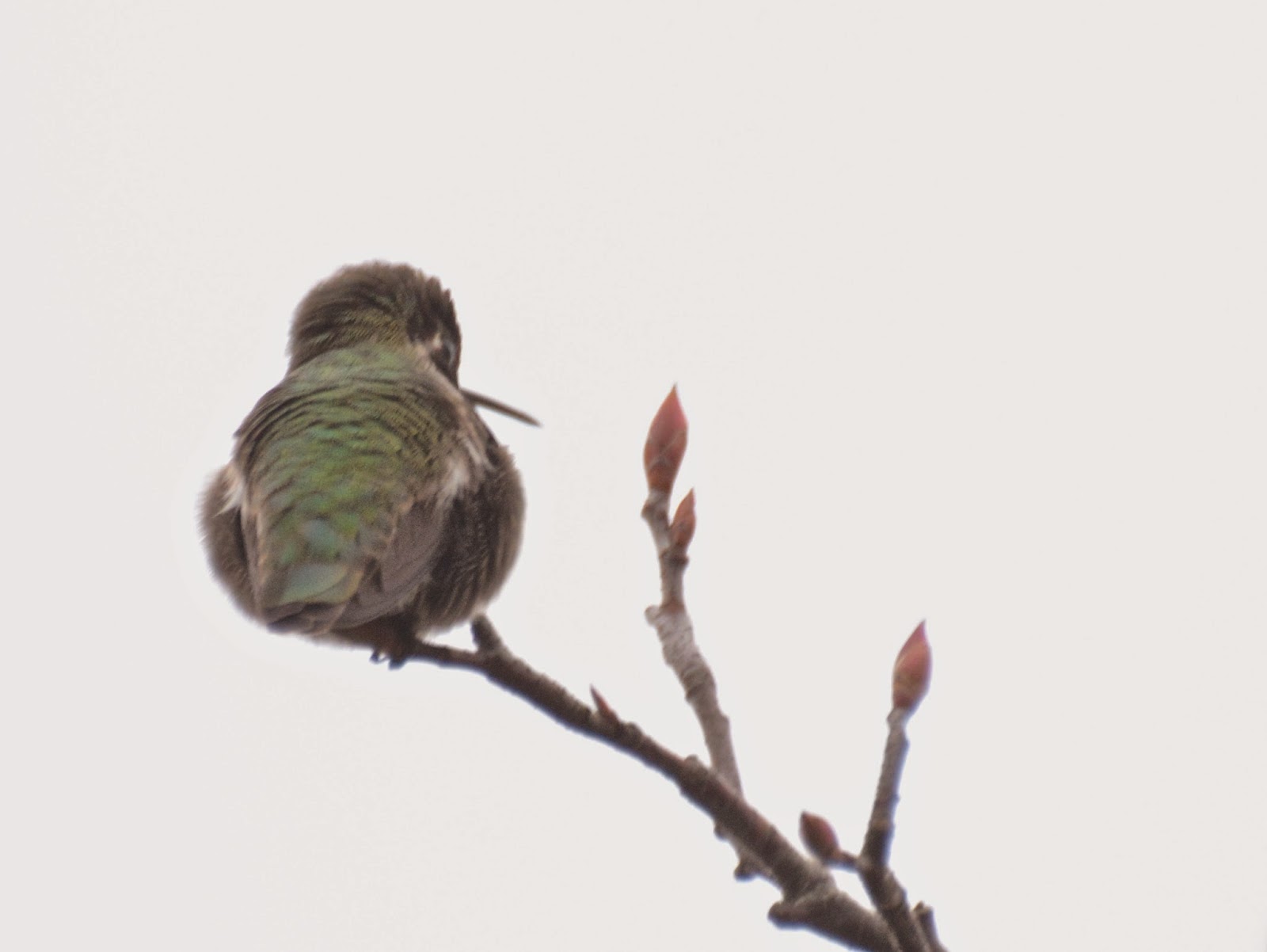 And it was Bill who pointed out this reflection.  Quite the mix of interesting images in here.  If you look really, really carefully, you may even spot a critter or two. 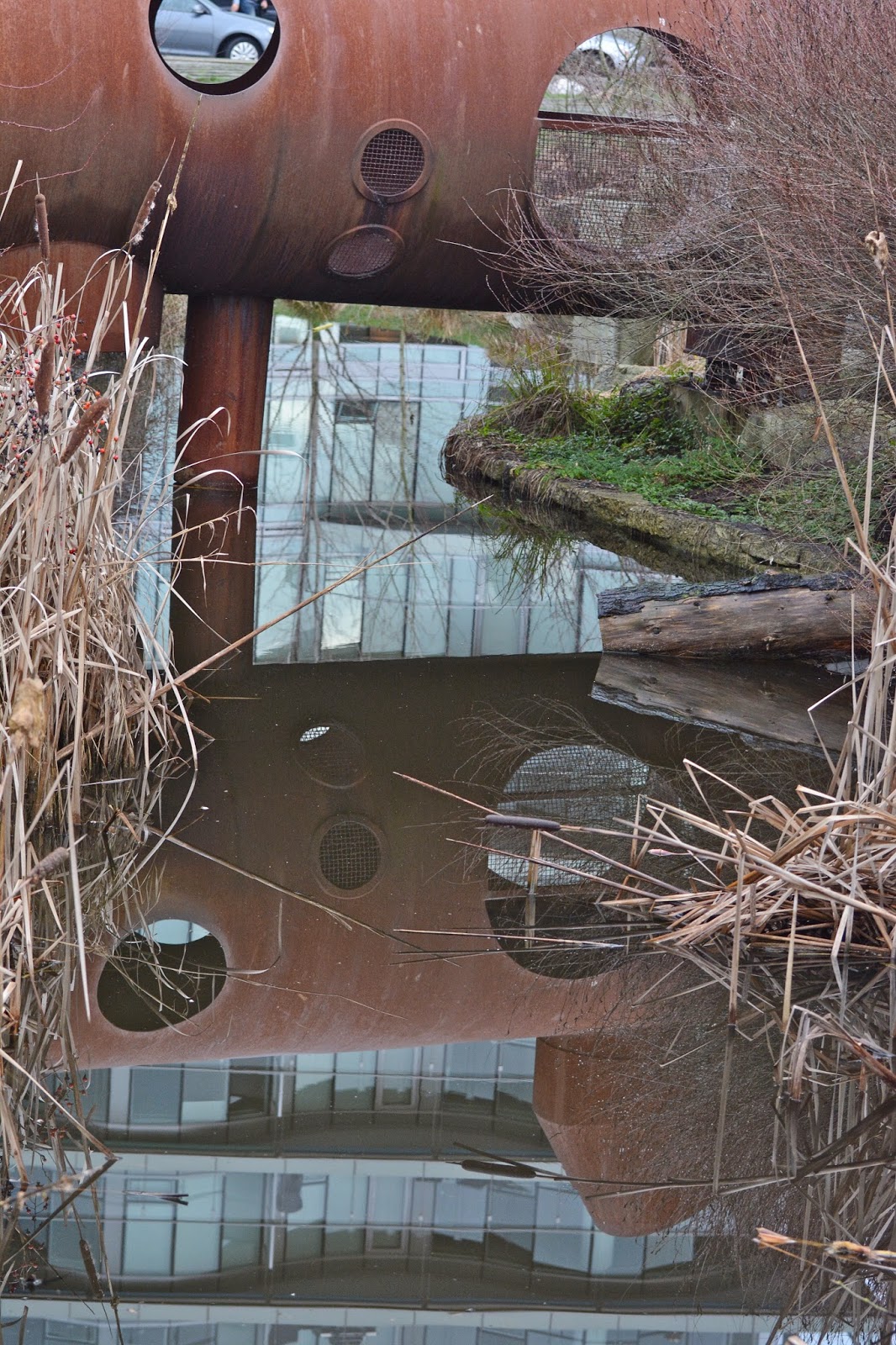 There were lots of mallards about, 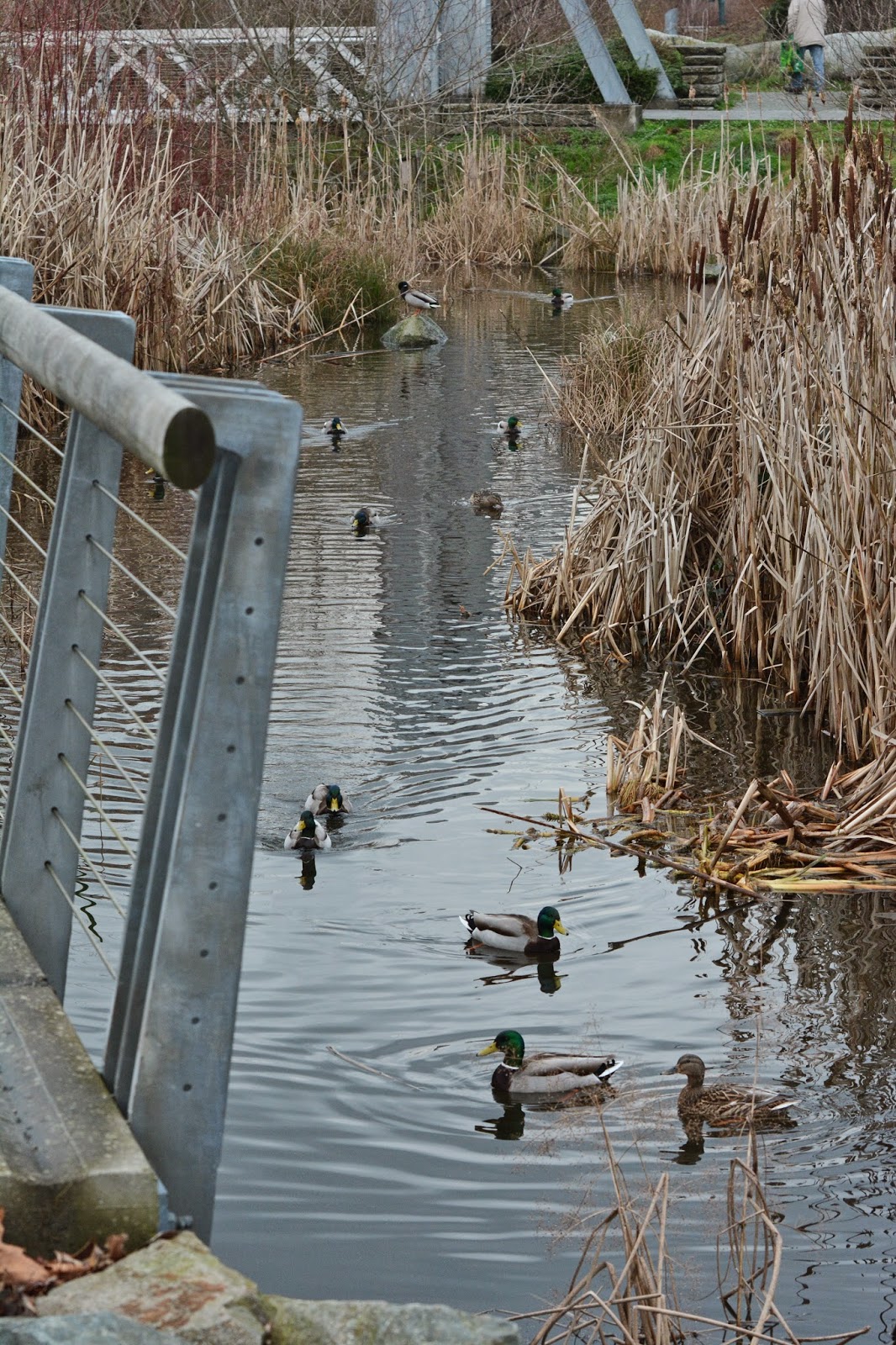 and lots of family-planning activities. 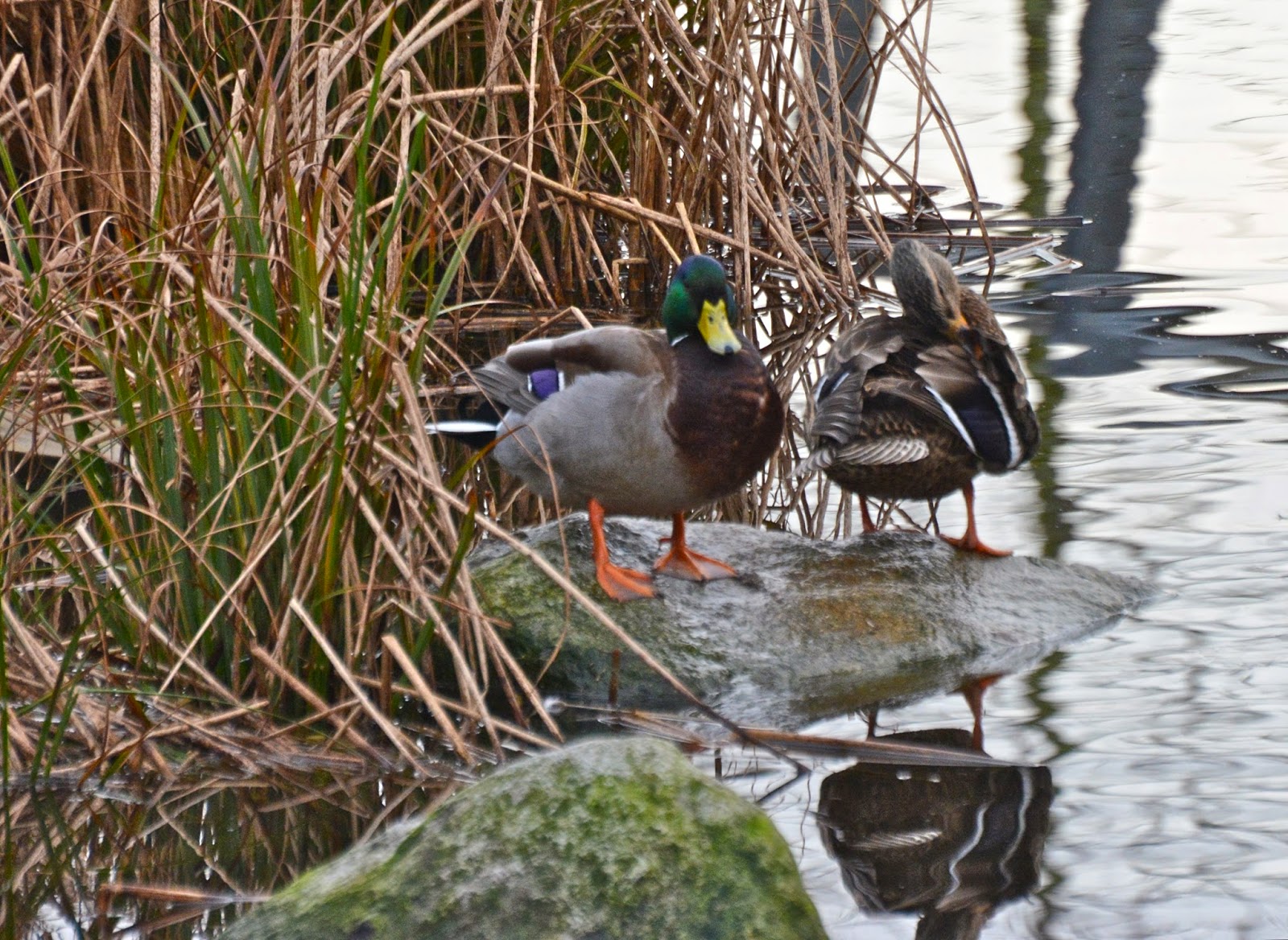 A Redwing Blackbird watched us from a safe spot, flew down to get the peanut we offered (I missed that shot), and then headed to his nest. 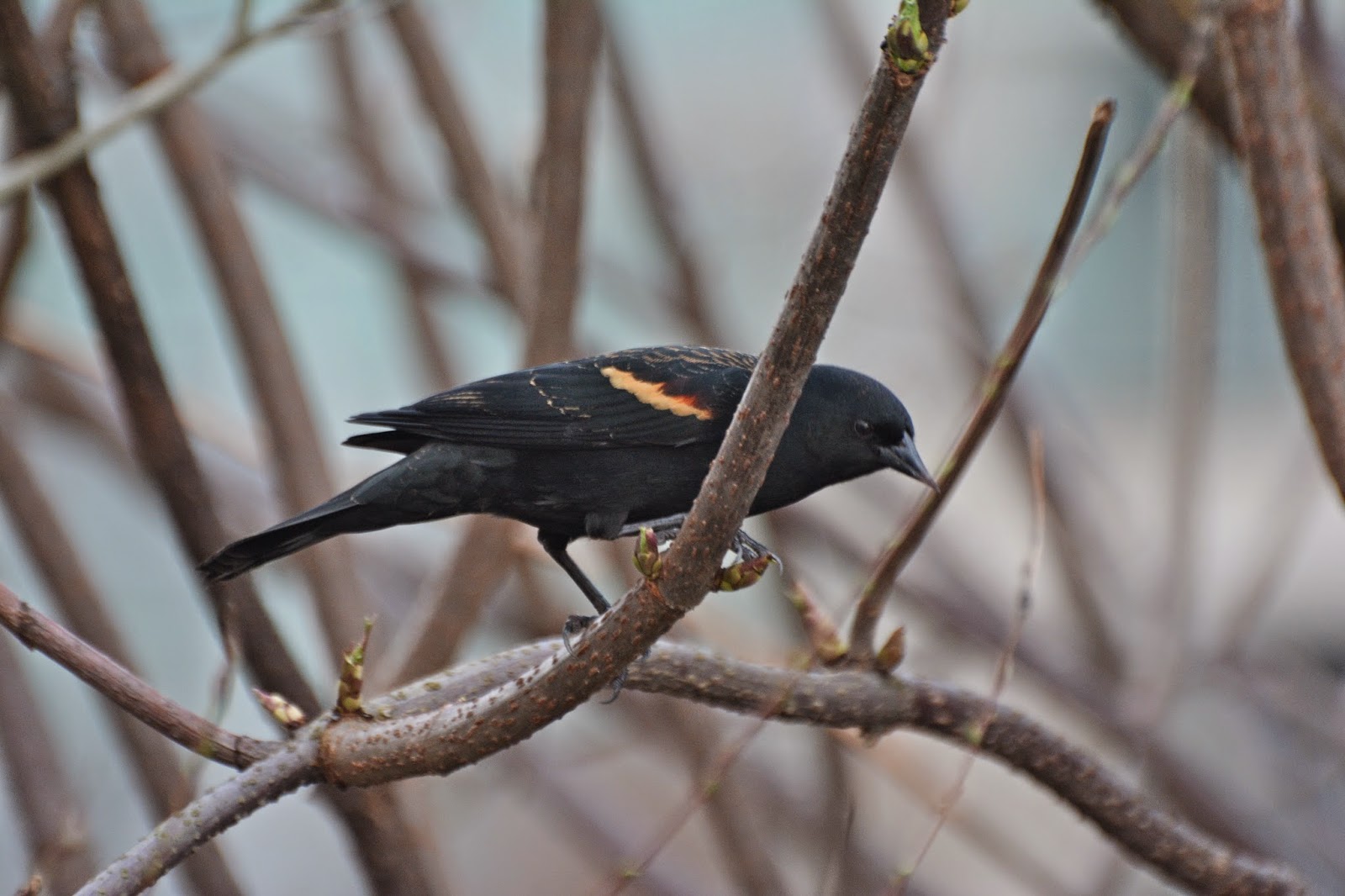 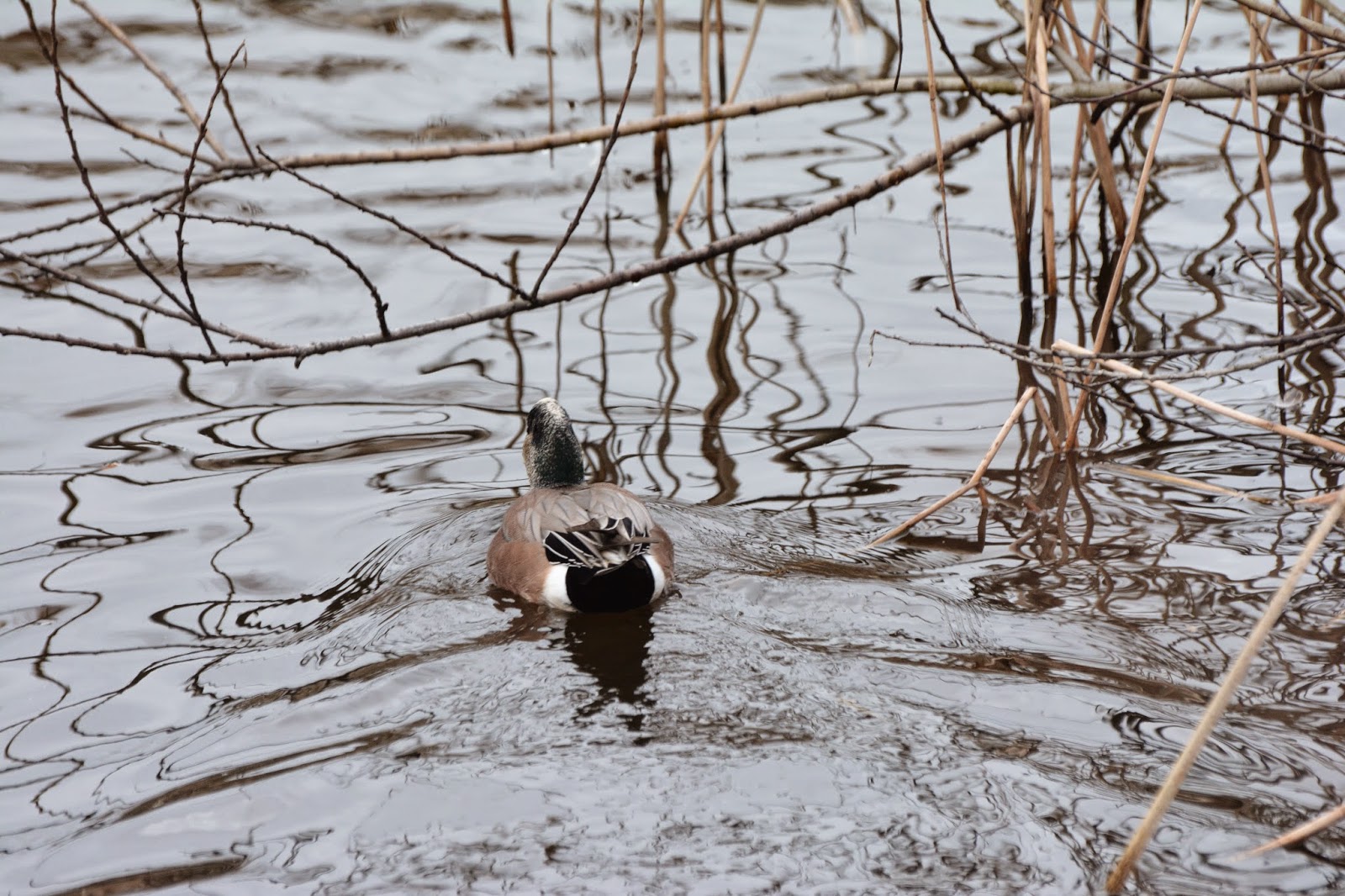 while Black Jack puffed up her chest and reminded Bill that it was surely time for a treat. 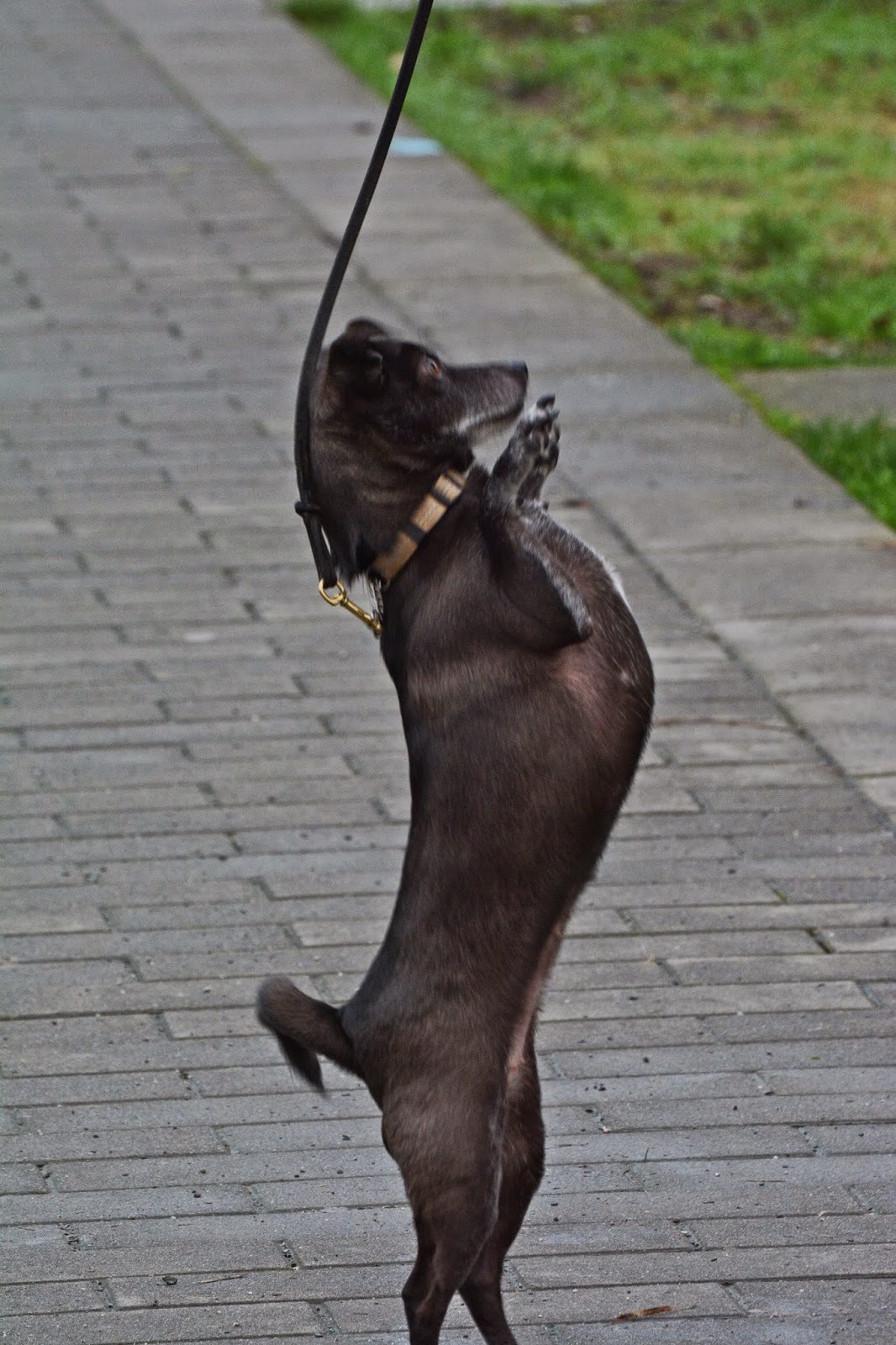 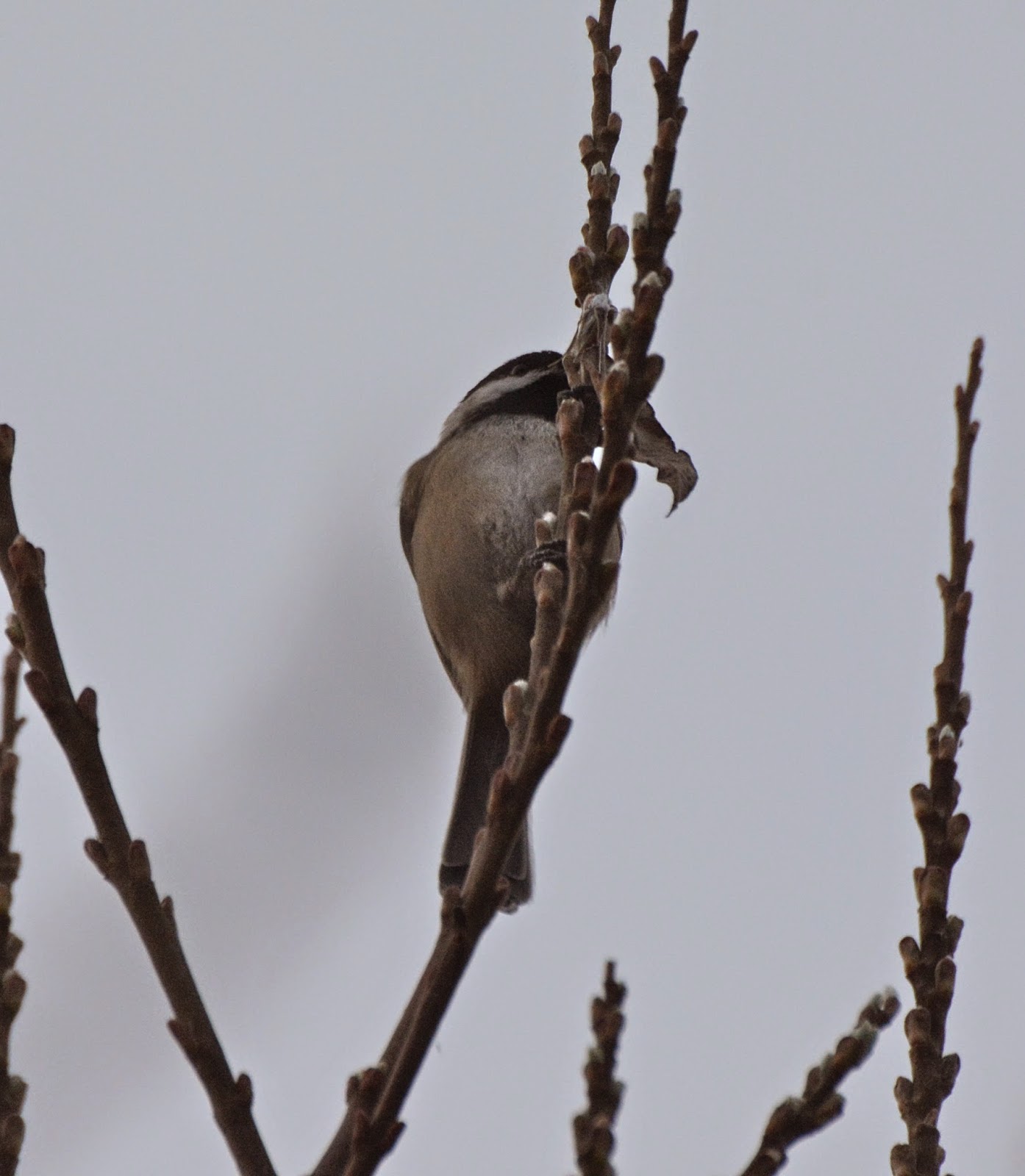 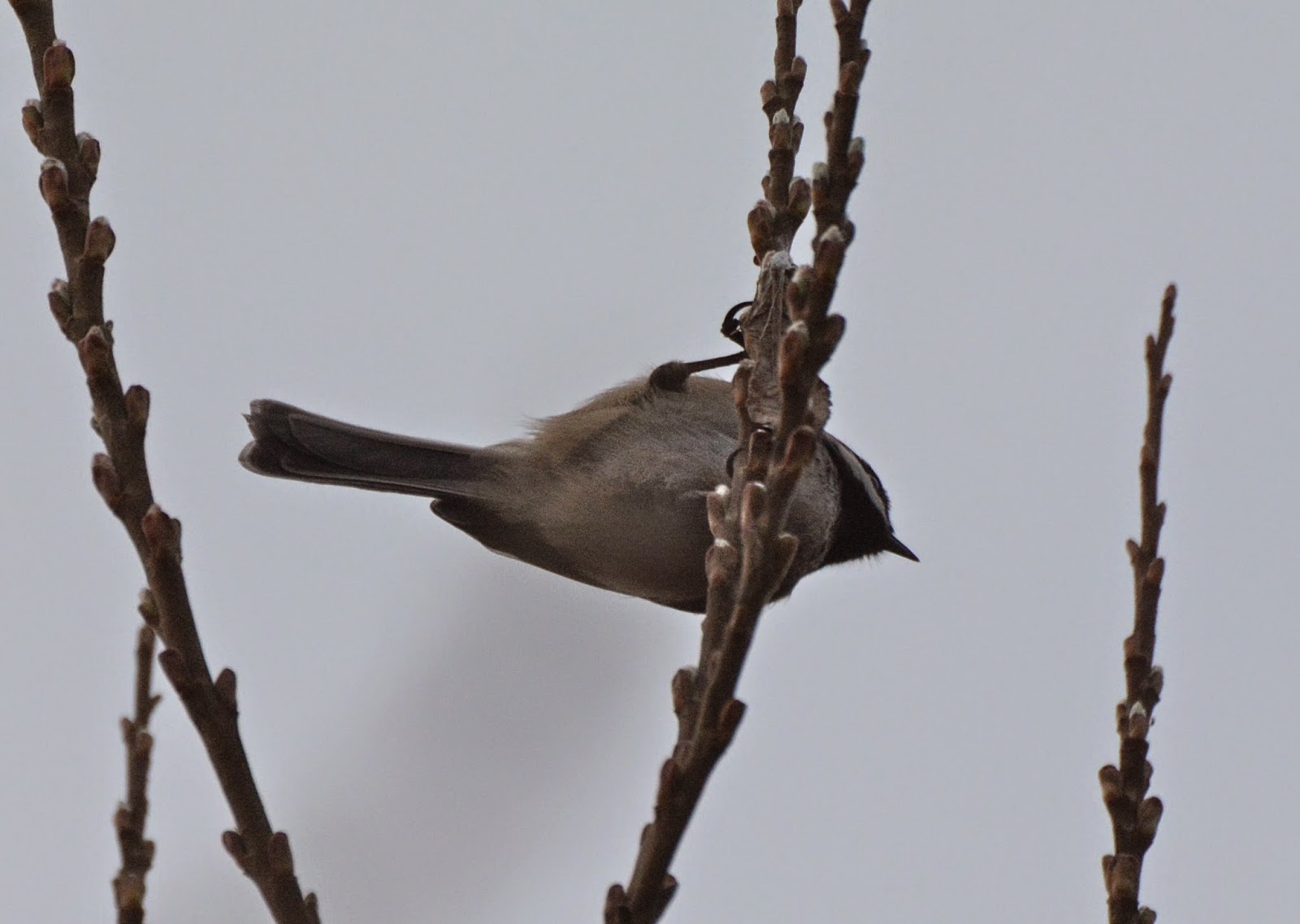 and I struggled to follow the actions of some very active Kinglets. I was looking up for such a long time, and with such focus, I stepped off the path and into the brambles.  I still have the scrapes to prove it, but I did finally get a look into its eye.  For just a couple of seconds, I saw flashes of brilliant red on one male (not sure if this is the same one).  Ruby-Crowned Kinglets are a very rare and exciting find for me.  Oh, to catch that red top-knot one of these days! 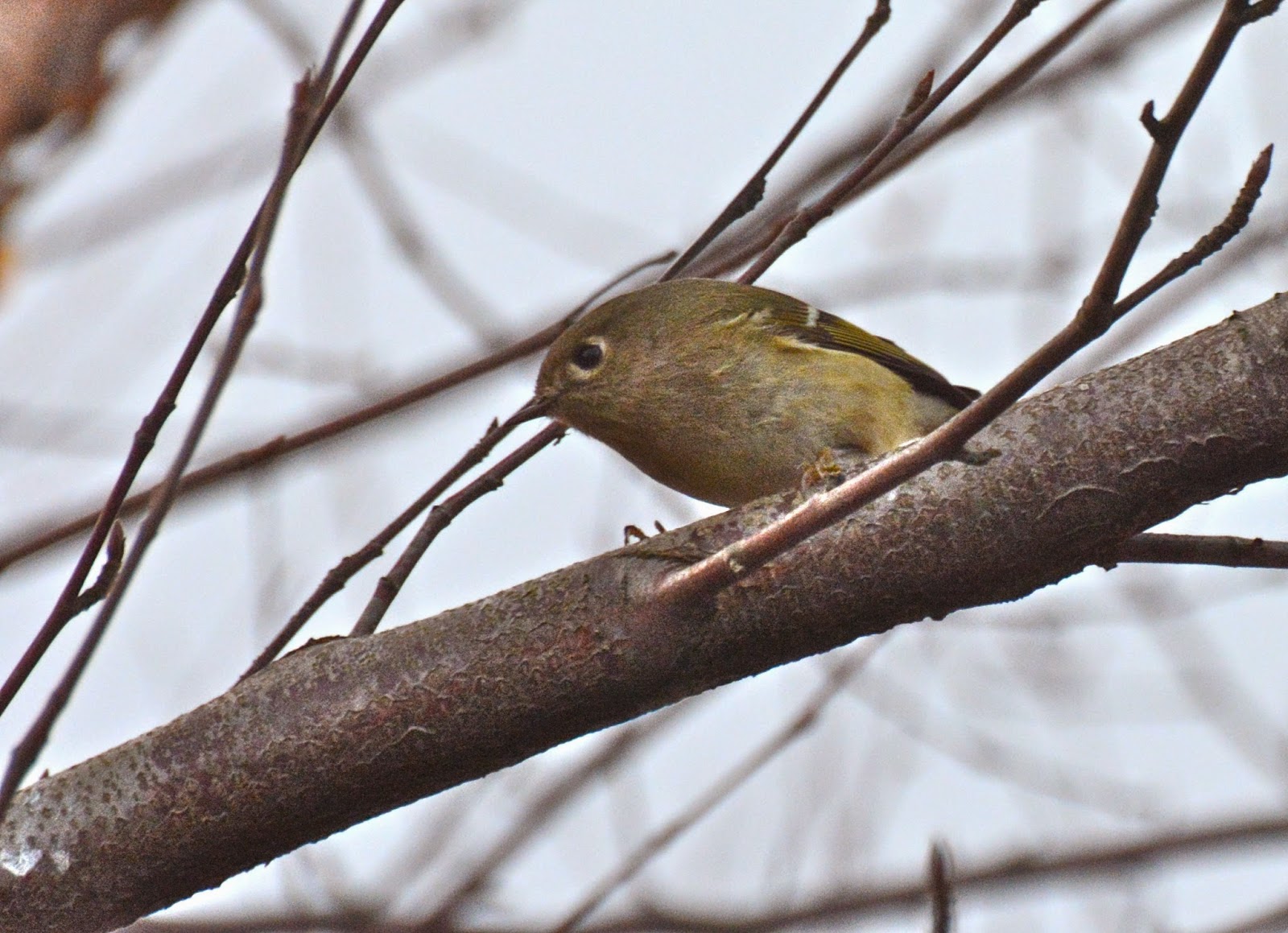 I'll keep trying.  In the mean time, whatever love comes our way today, let's appreciate it and send it on.  They do say it Makes the World Go Round.
Perhaps you could send some on as well to Eileen and the wonderful critters at her meme.
Happy Valentine's Day, everyone! 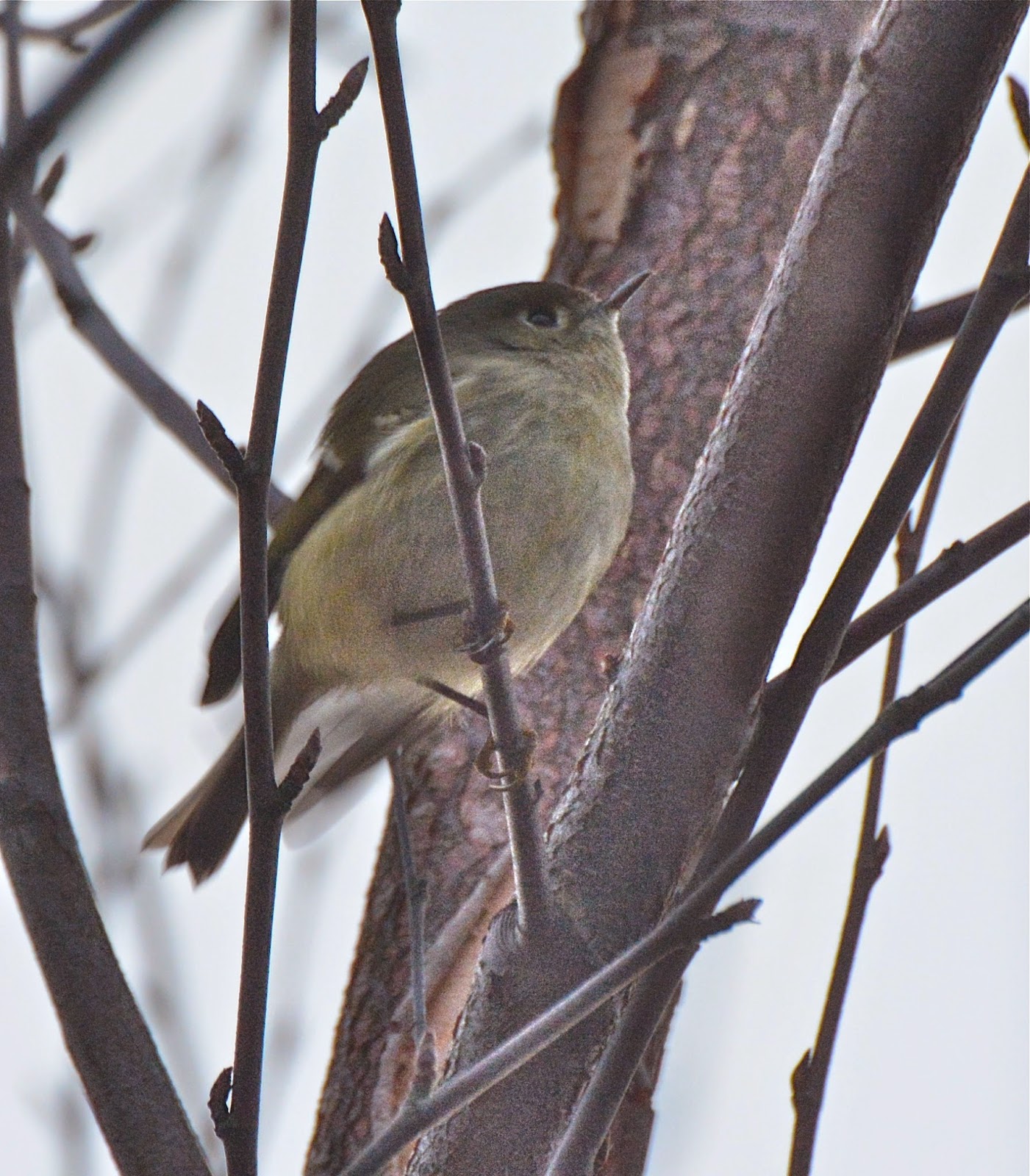