I spy.. something orange!

Two posts in one day, because this one was waiting in the wings, and by next week, there will almost certainly be more oranges to share with Maria's Orange You Glad It's Friday.

Twice in the past week, we've had occasion to admire the conducting skills of downtown Vancouver's traffic directors. 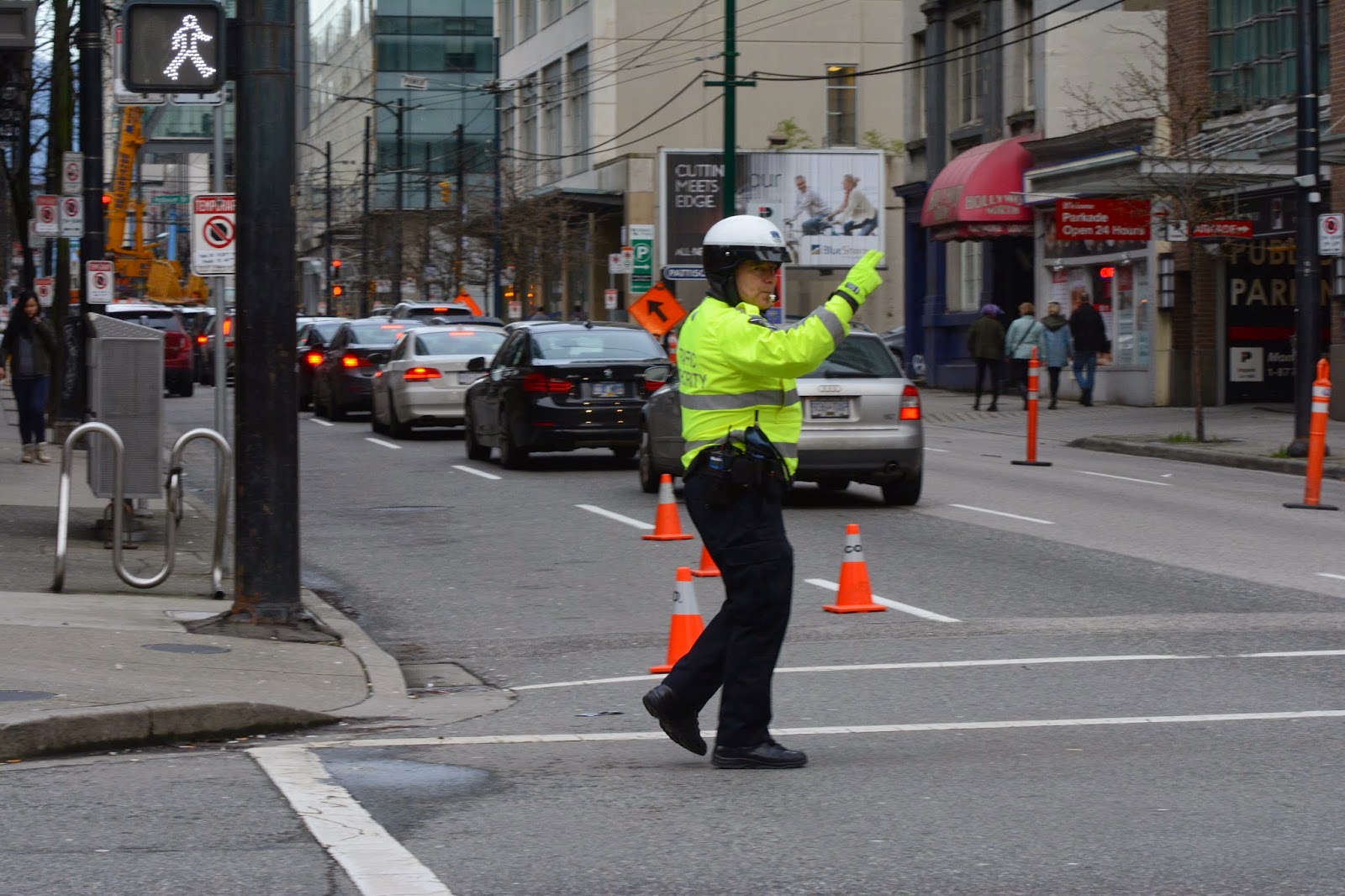 I am convinced it is an art to do this job well.  He had excellent timing with the whistle too. 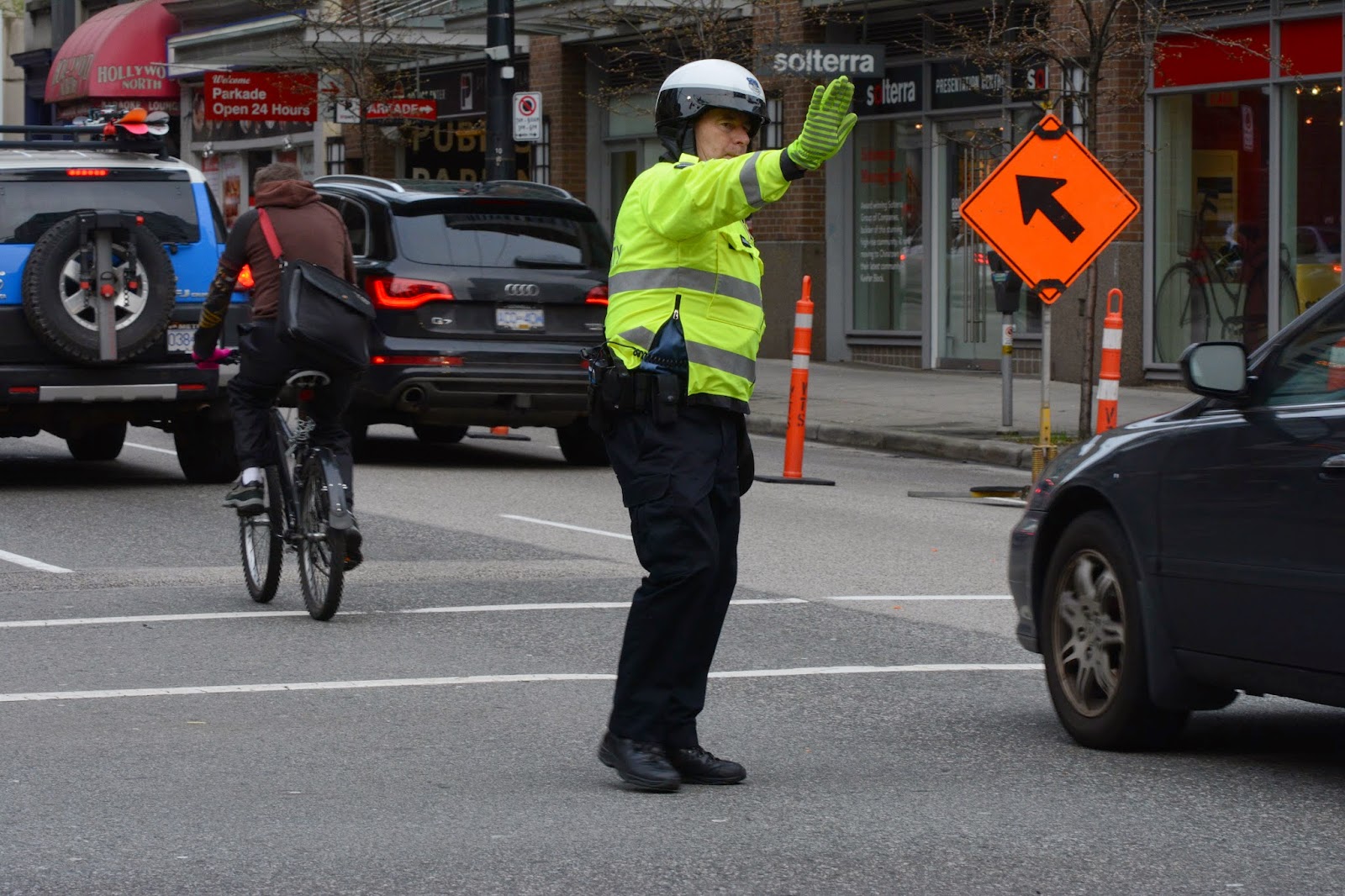 It was this huge crane at the end of the street that necessitated his direction.  As Bill said, though we smile when we see a good traffic director, we also think about their safety.  Steel-toed boots should be, I'm thinking, standard issue. 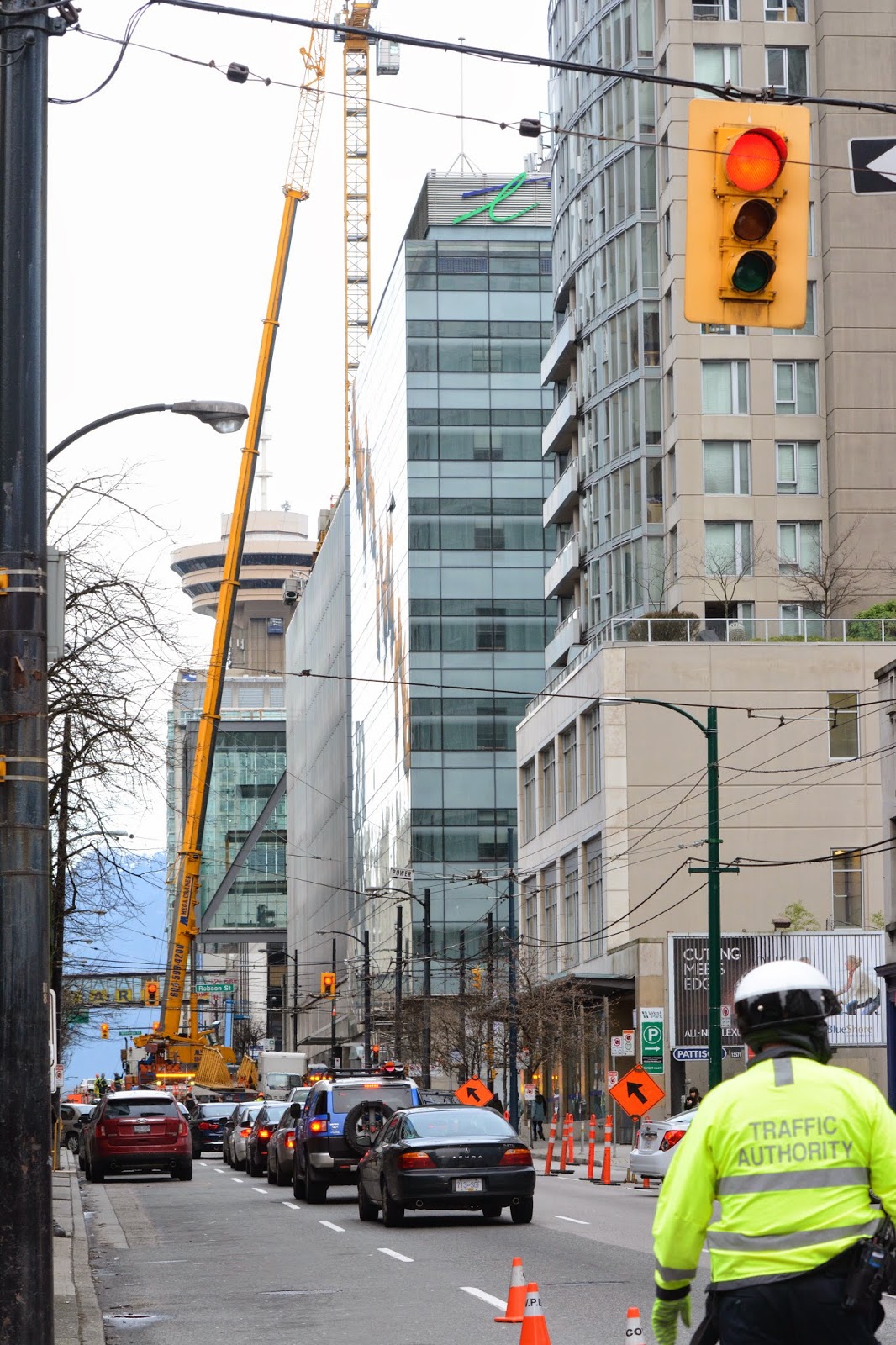 Later in the afternoon, our corner table at the café in Harrison Galleries looked on a beautiful work by Stewart Jones. 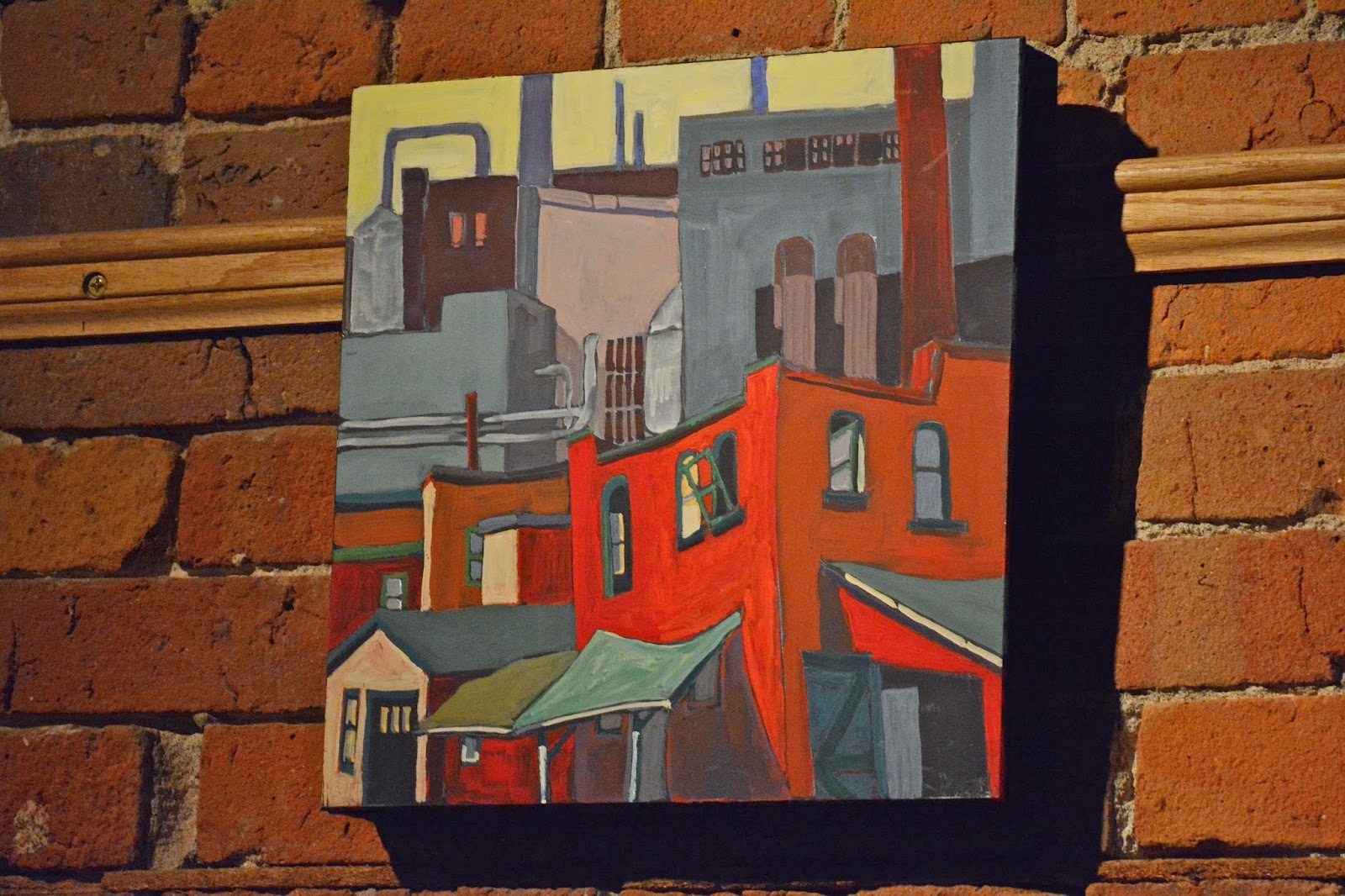 Bill, quite by coincidence, has worn his orange shirt a few times when I was seeking that color in our surroundings.  As we sat in the gallery, sipping our lattees and doing our crossword, I thought about his orange time piece.  We bought that watch in the hospital gift shop over a year ago.  It has really served us well.  He always sets it out on the table so that we will make sure to pack up our things before closing time.  And, some of you may recognize the Mauli on Bill's wrist, so kindly tied on by Alnasir, of Kaarigar Handicrafts.  We wear ours with a deep appreciation for the spirit of generosity attached to it. 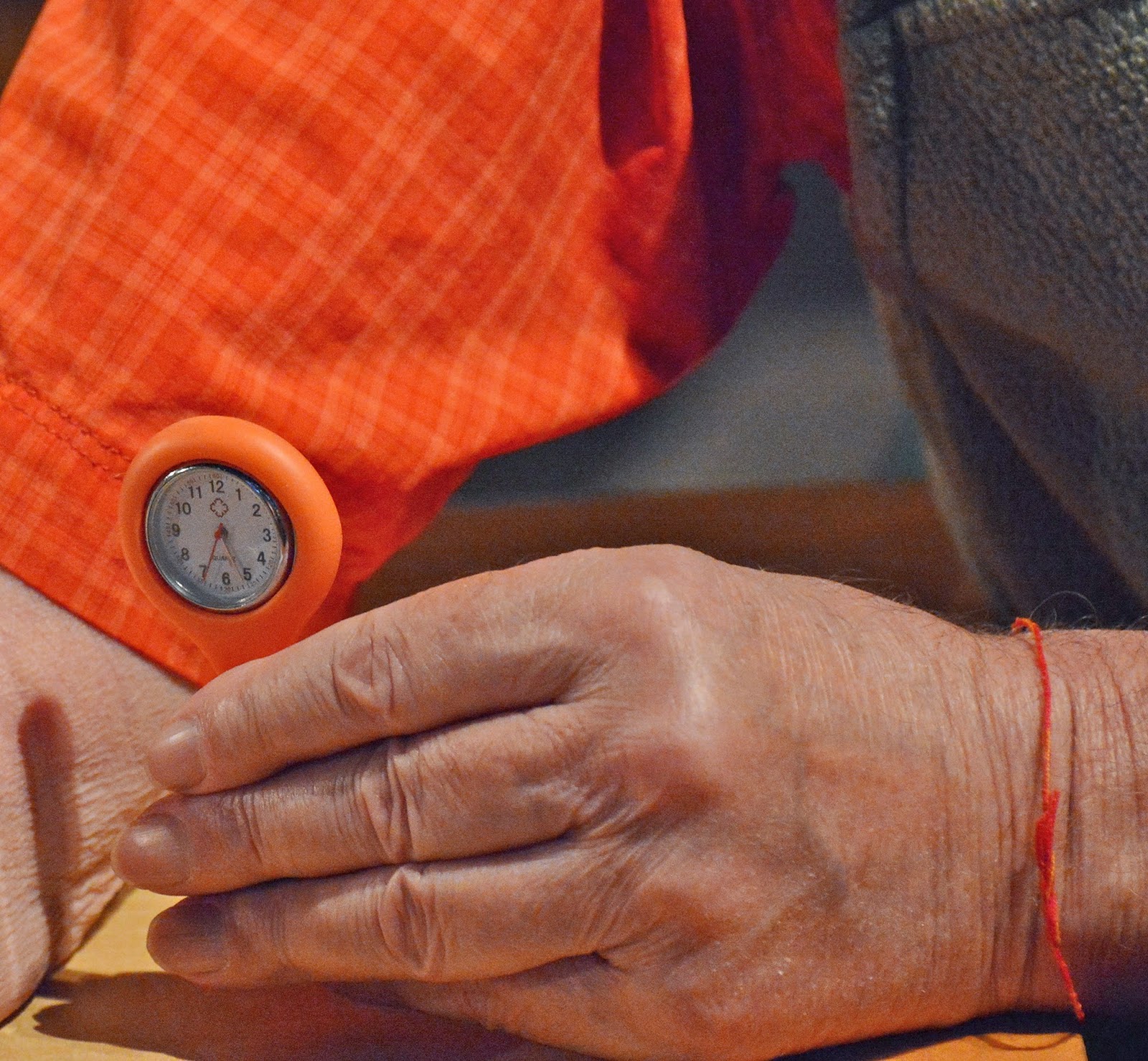 These photos were taken yesterday.  A transformer problem resulted in lost power for a good number of businesses and homes in Yaletown.  Here, the hydro truck comes to the rescue and we get to observe.. 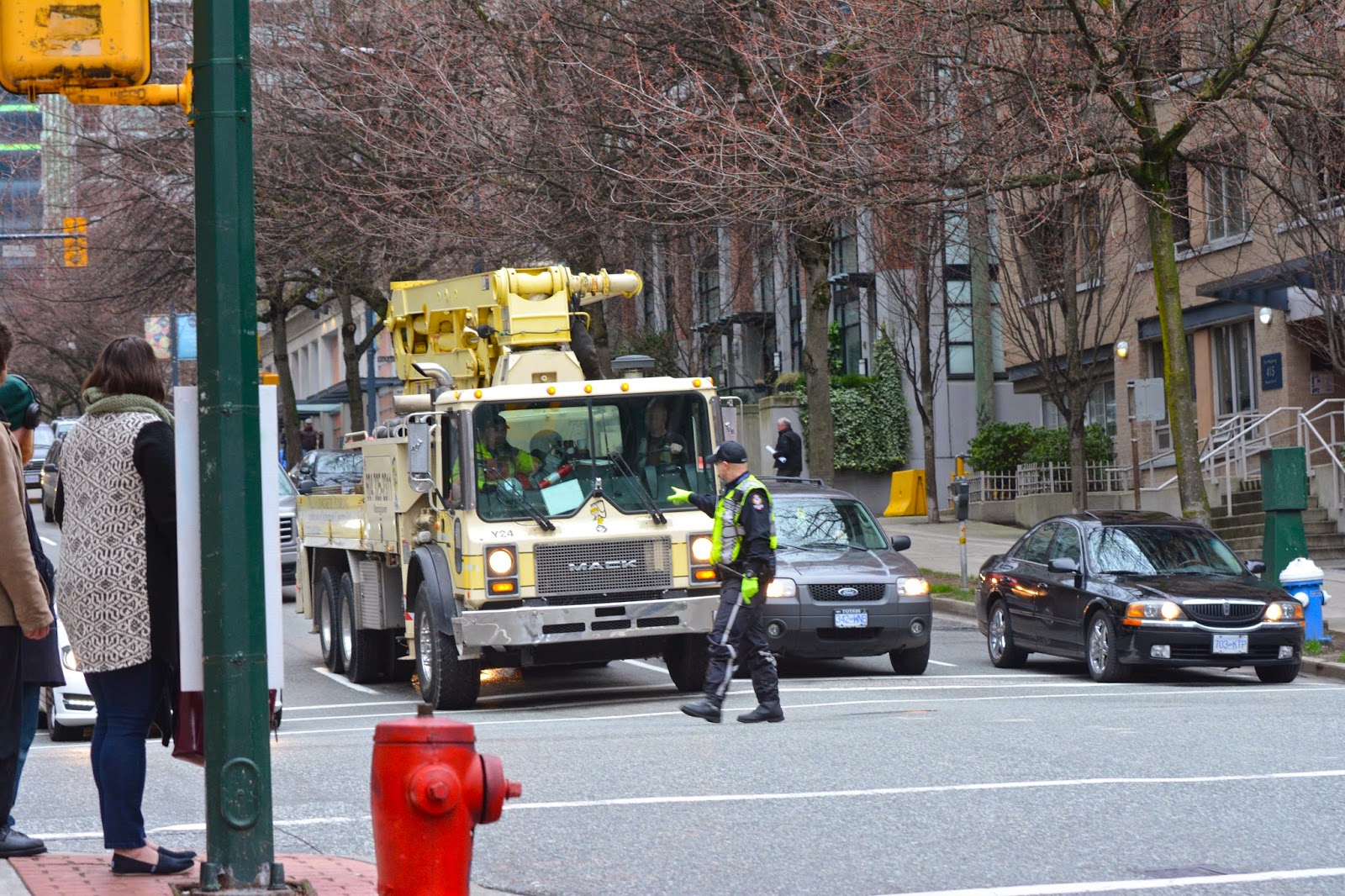 our second traffic supervisor of the week.  His "no nonsense" attitude and clear signals were impressive, though he didn't dance quite as expertly, I thought, as the first gentleman. Our beloved café had lost power as well, so we ended up at a much less pleasing, though still appreciated substitute shop.  Afterwards, we walked down some steps and from there, could see that the street was still lacking power and still closed to traffic. 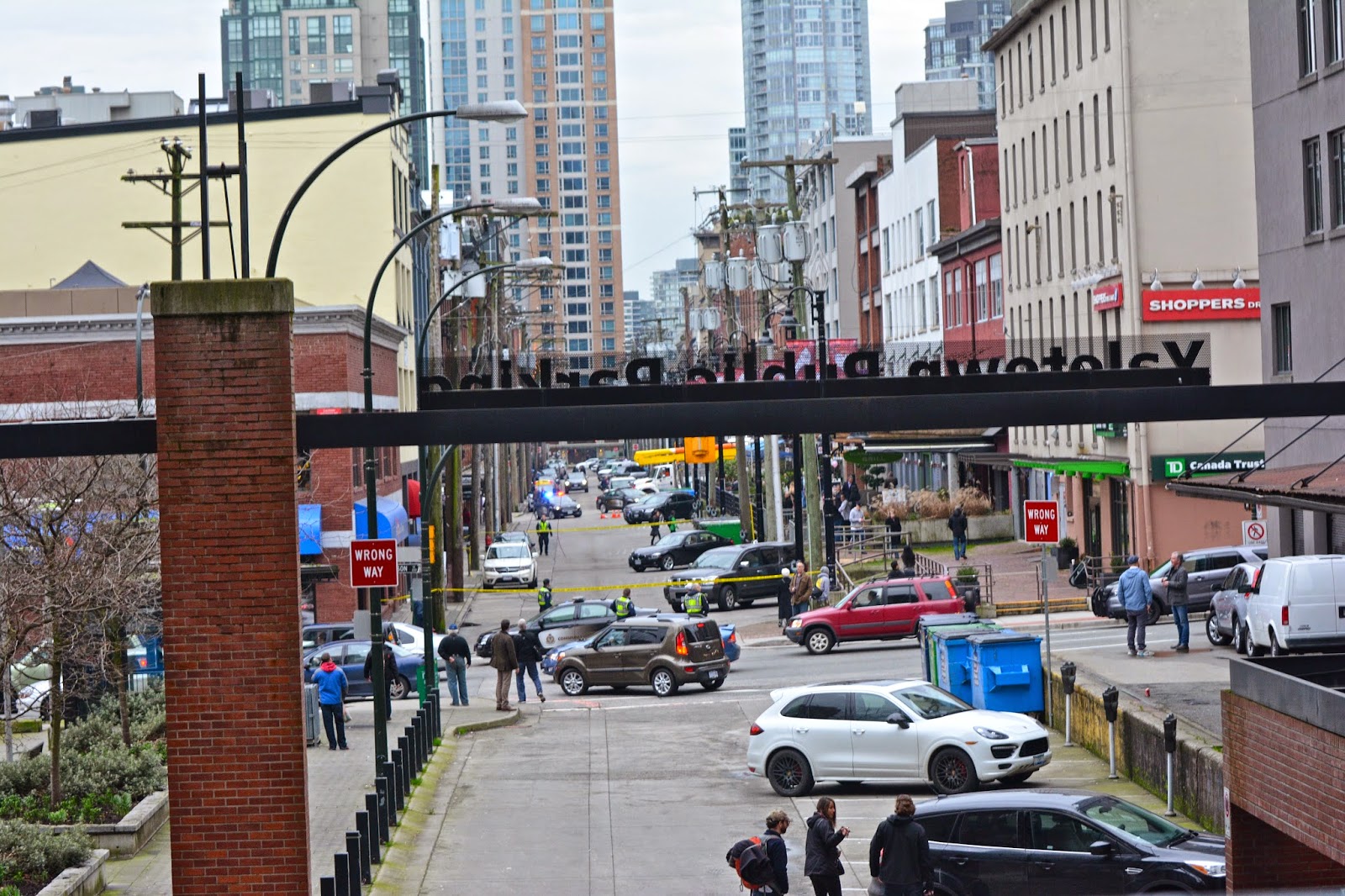 We had to sit outside with Black Jack for our lattés but fortunately the heaters above us.. 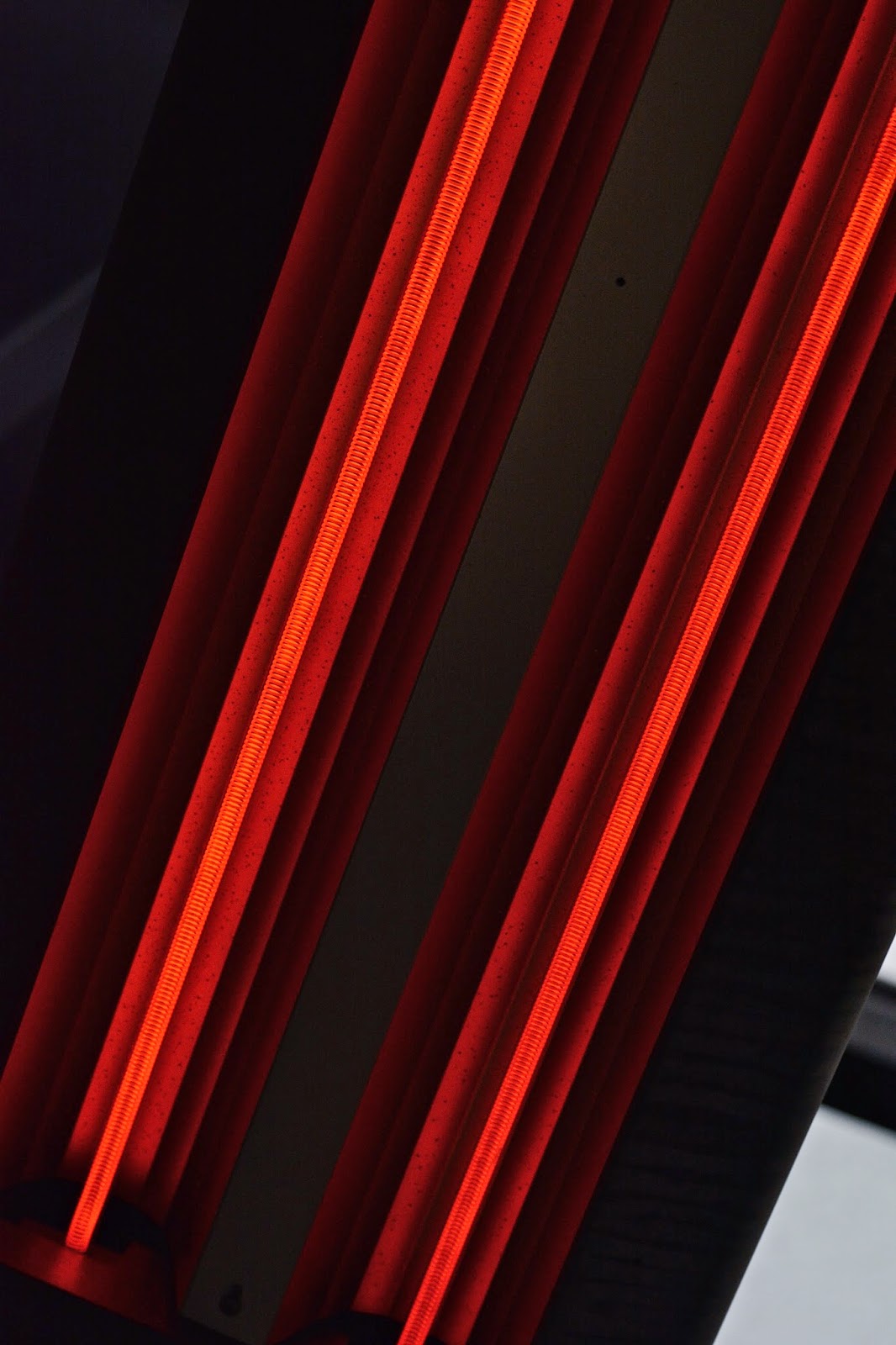 kept us from getting too chilled, and gave me an opportunity for orange-content photos. 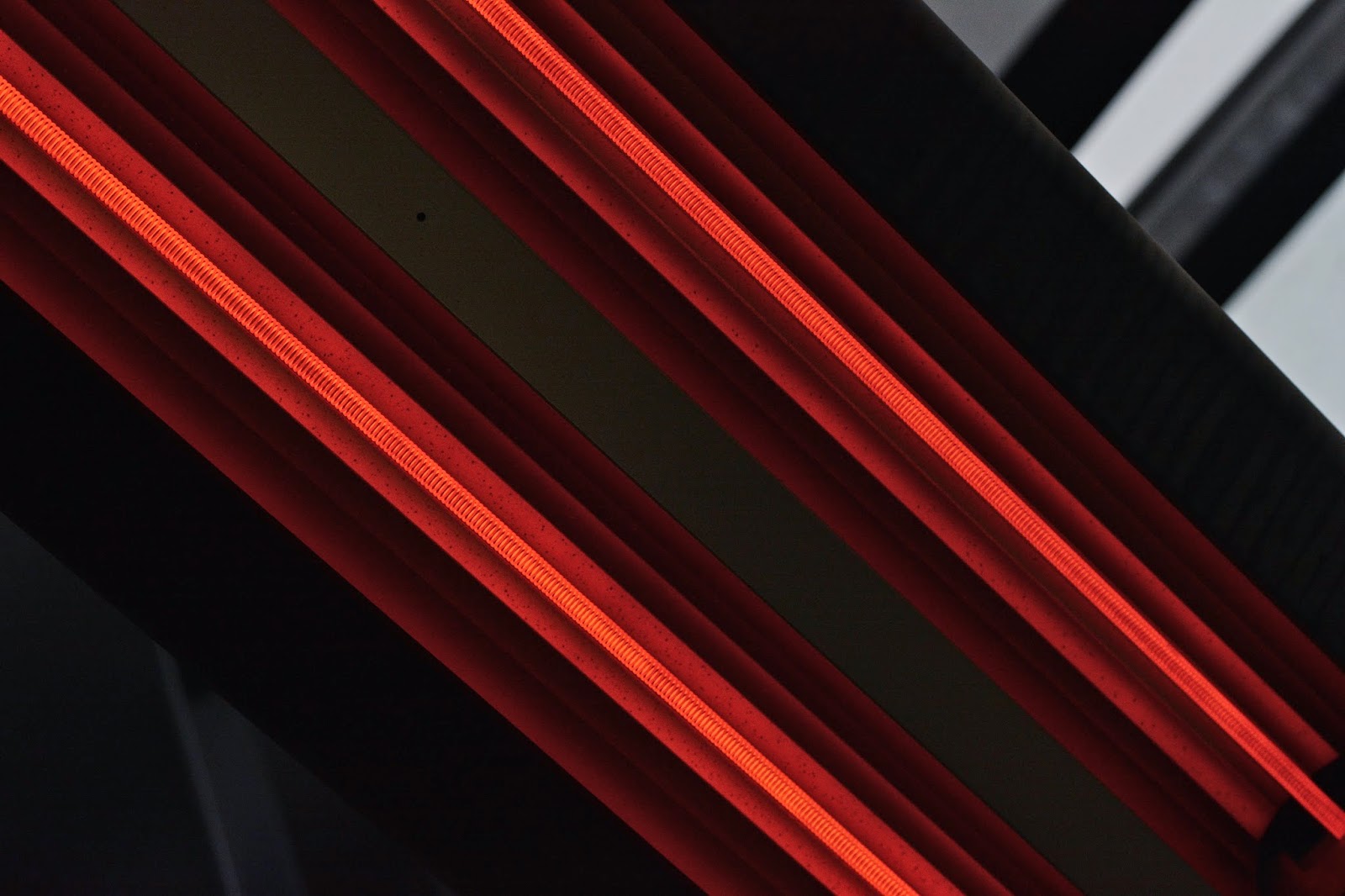 Below is a not so subtle hint that my post is ending :)  Bill took this photo as we walked home from a very pleasant outing today.  More about that tomorrow.  In the mean time, if you have any pictures with a little or a lot of orange in them, it's not too late to share them with Maria's meme.  Thanks, Maria.  It's a lot of fun to zero in on the orange around us.  And, thanks everyone, for taking a few moments out of your day to stop by for a visit. 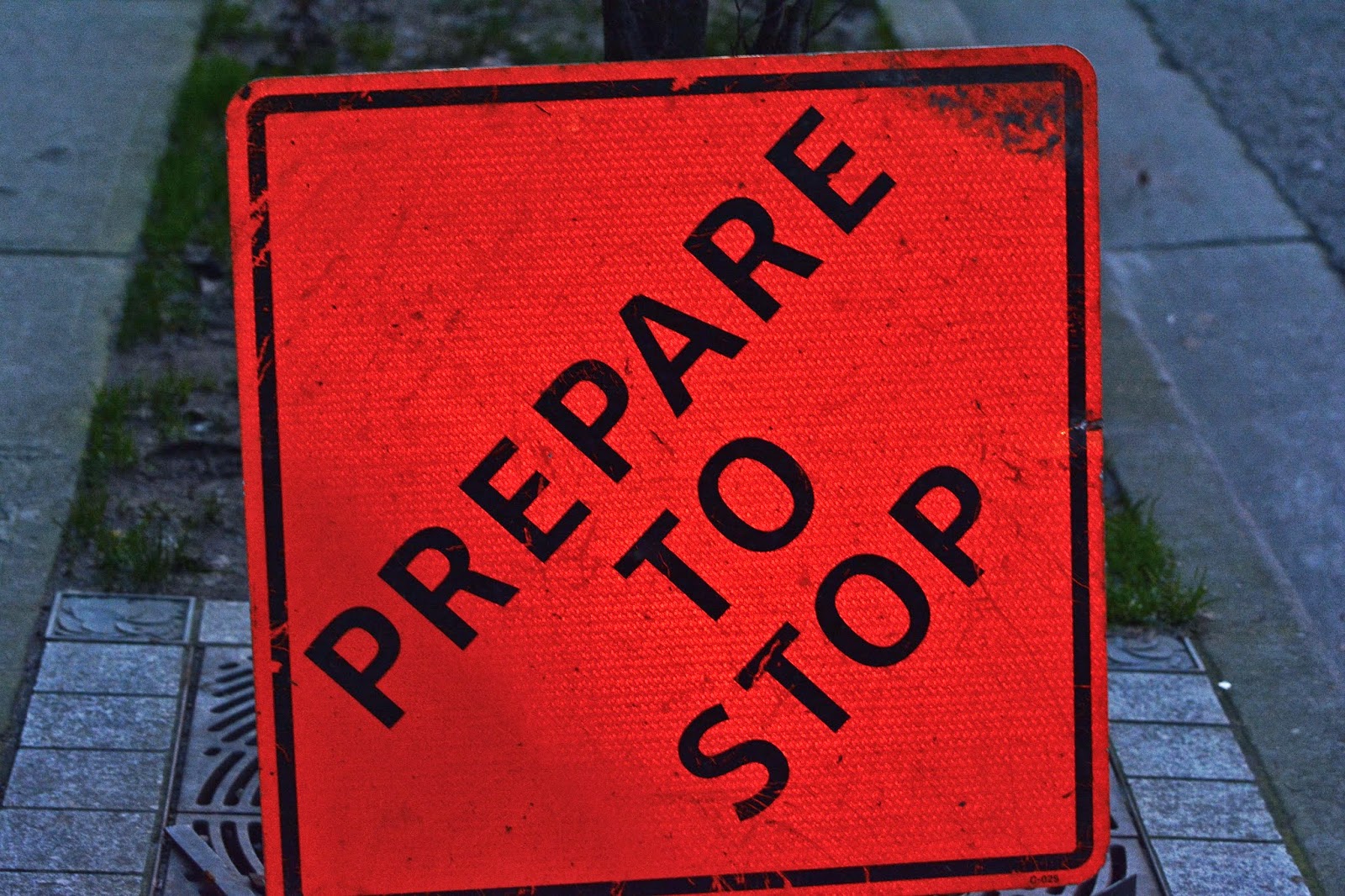