Exploring the letter E and a few Fences

An eclectic mix today.  Some "E" words to share with ABC Wednesday (though it is now Friday), and some Good Fences for TexWisGirl, with many thanks to the hosts of each of these memes.  They encourage bloggers from around the world to enlighten and entertain each other and that leads to hours and hours..  okay, sometimes, I admit, just a few too many hours :) .. of enchantment.

Two versions of Gordon Lightfoot's  "Early Morning Rain" to accompany your reading,
the above sung by Lightfoot himself, and the other by Elvis.  That "just explorin' as I stroll along" feel to the music seems to suit the tone of the post.
Bill and I rode our bikes over the Lions Gate Bridge on Wednesday.  I was elated, euphoric, ebullient and enthralled..  and that is putting it mildly :)  Though bike commutes across the bridge were a regular endeavor and pleasure before retiring, it had been close to three years since  testing my endurance, and only the second time ever for Bill to do it.  Knowing we were both strong and healthy enough to make the trip was emancipating and just plain fun. 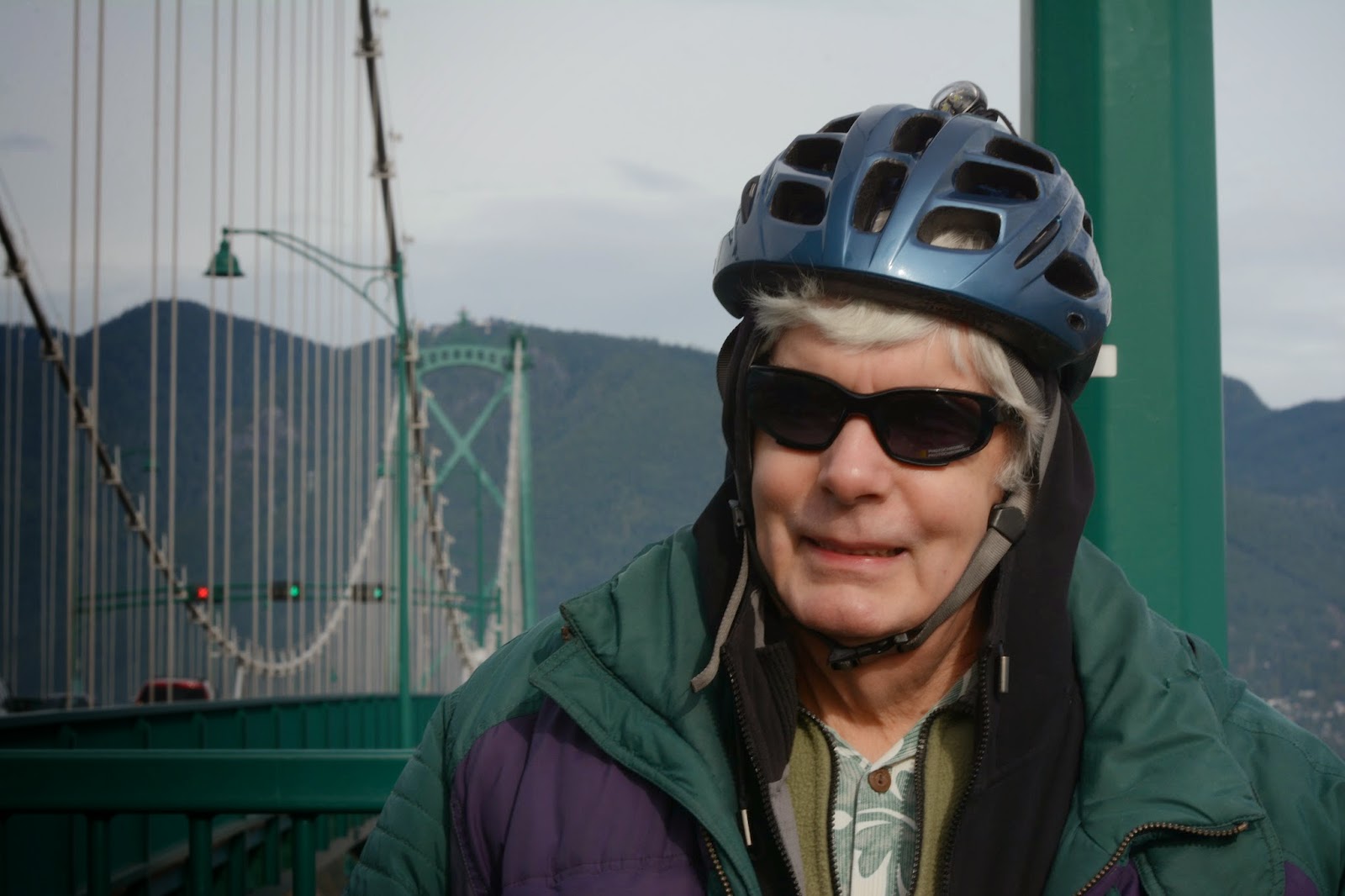 Black Jack came with us.  Her eyes do not portray a lot of excitement here.  The potential for a squirrel sighting is fairly low at the top of a big city bridge.  She checked out the view between the fence railings, declared it to be ho-hum, and then settled back down into her basket. 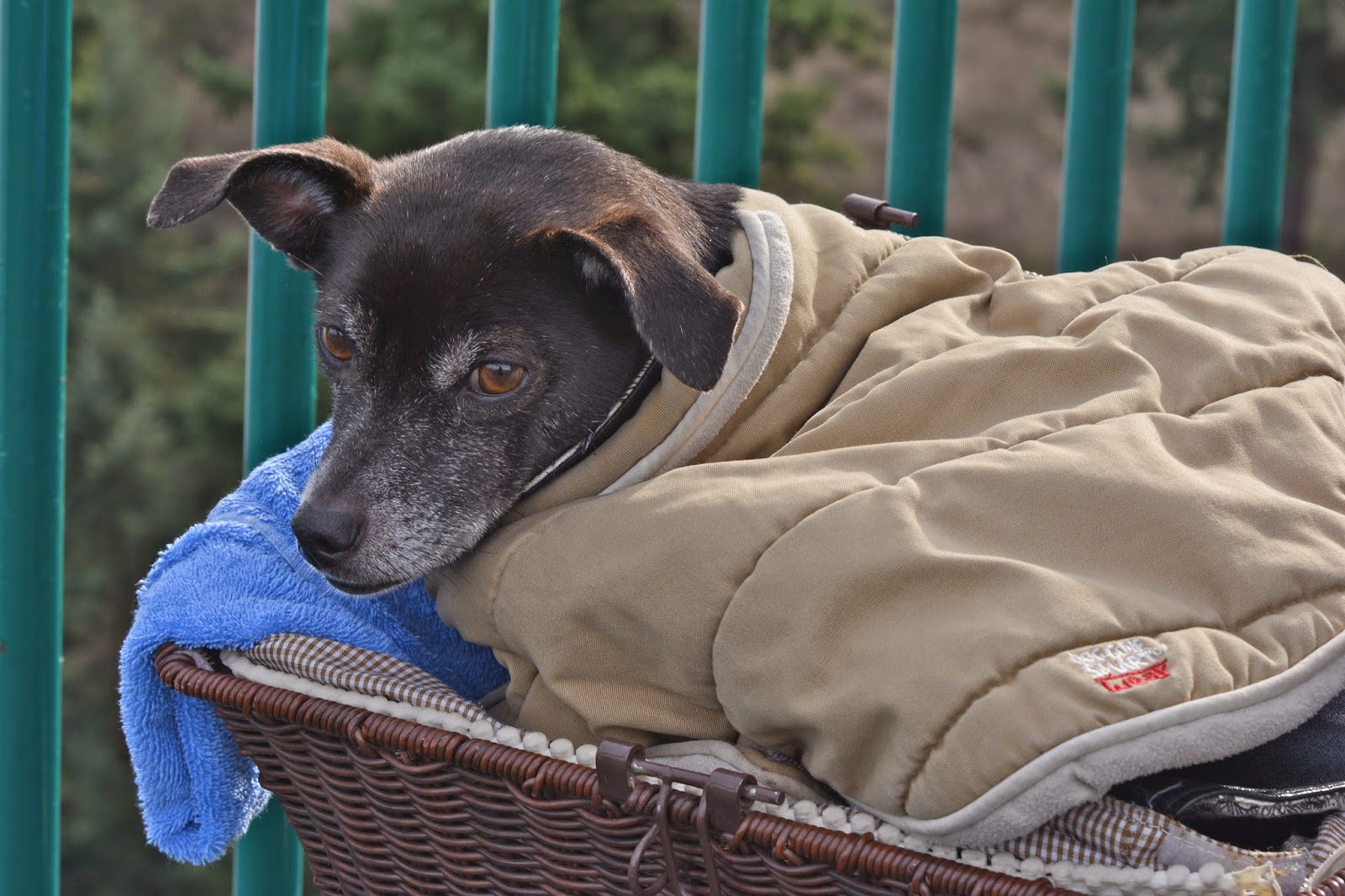 Refreshments and a visit with Berenice (a former colleague and wonderful friend) gave us just the lift we needed to boost our energy for the ride home. 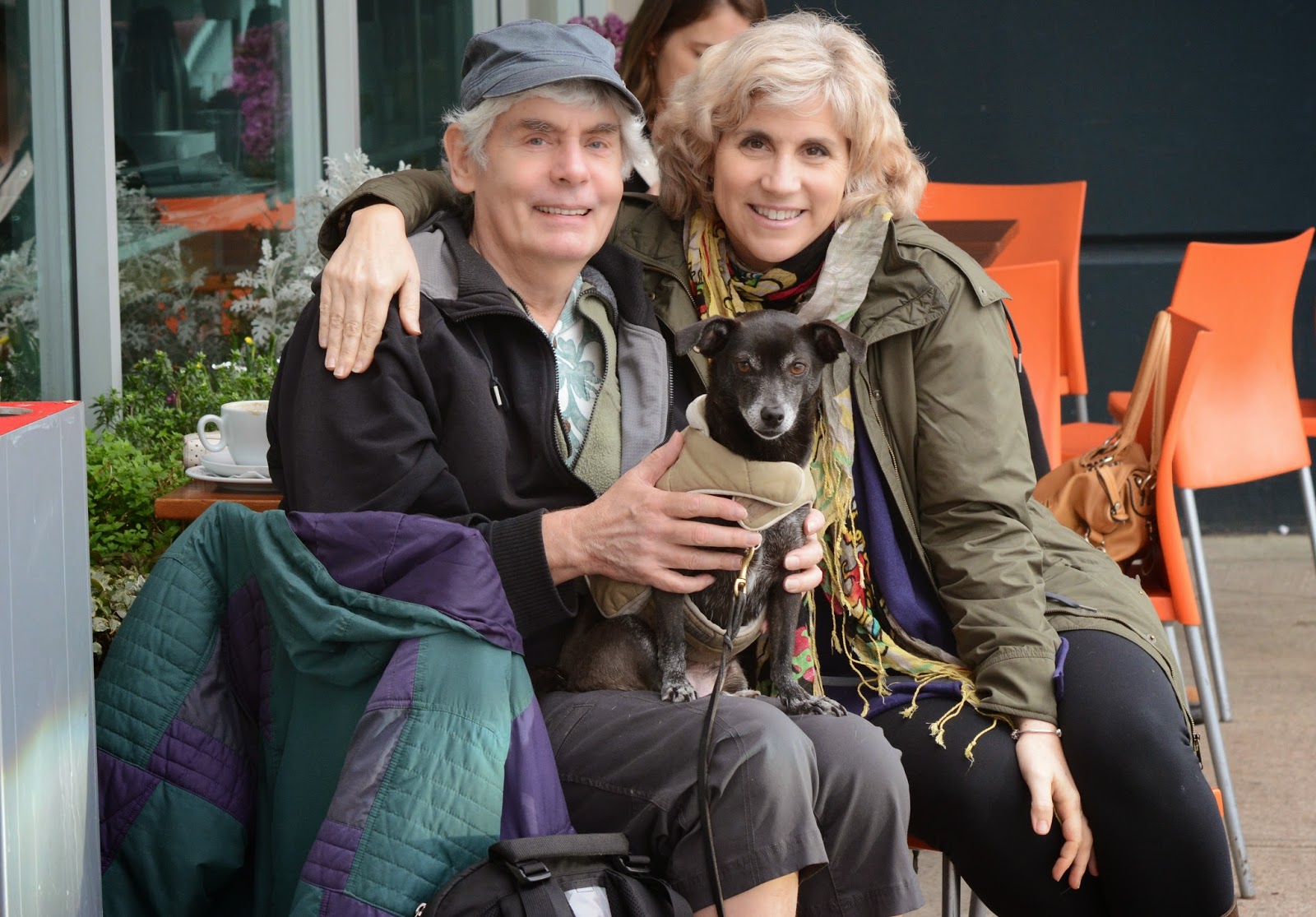 And what an exquisite view met us at the top of the bridge on the way back. 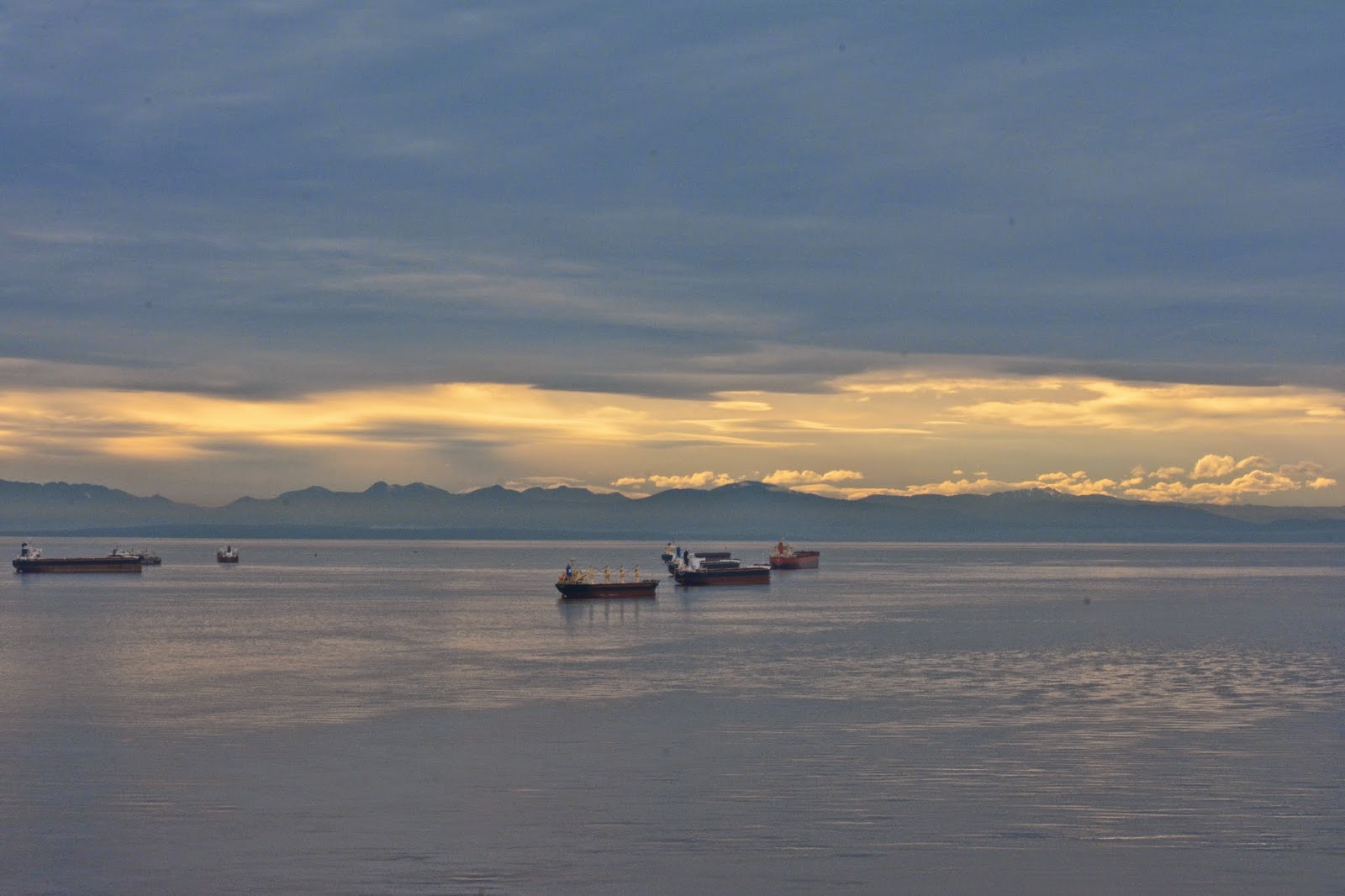 Black Jack again evaluated the chances of espying critters, and.. 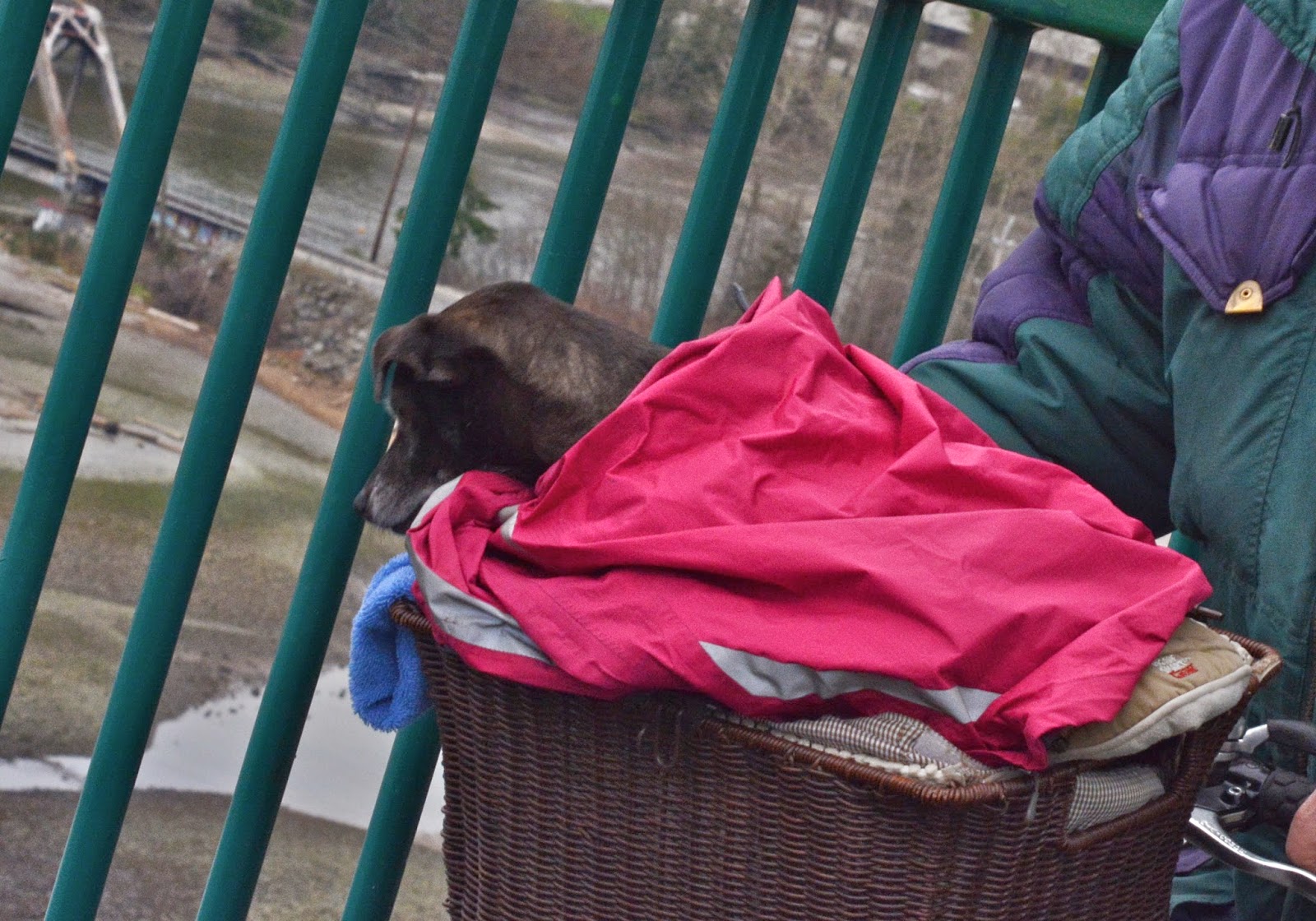 and thought those rather exiguous, but she did agree to pose with her bright-eyed Bill. The fence theme is, I think, mostly self-explanatory, but I'll elucidate here. 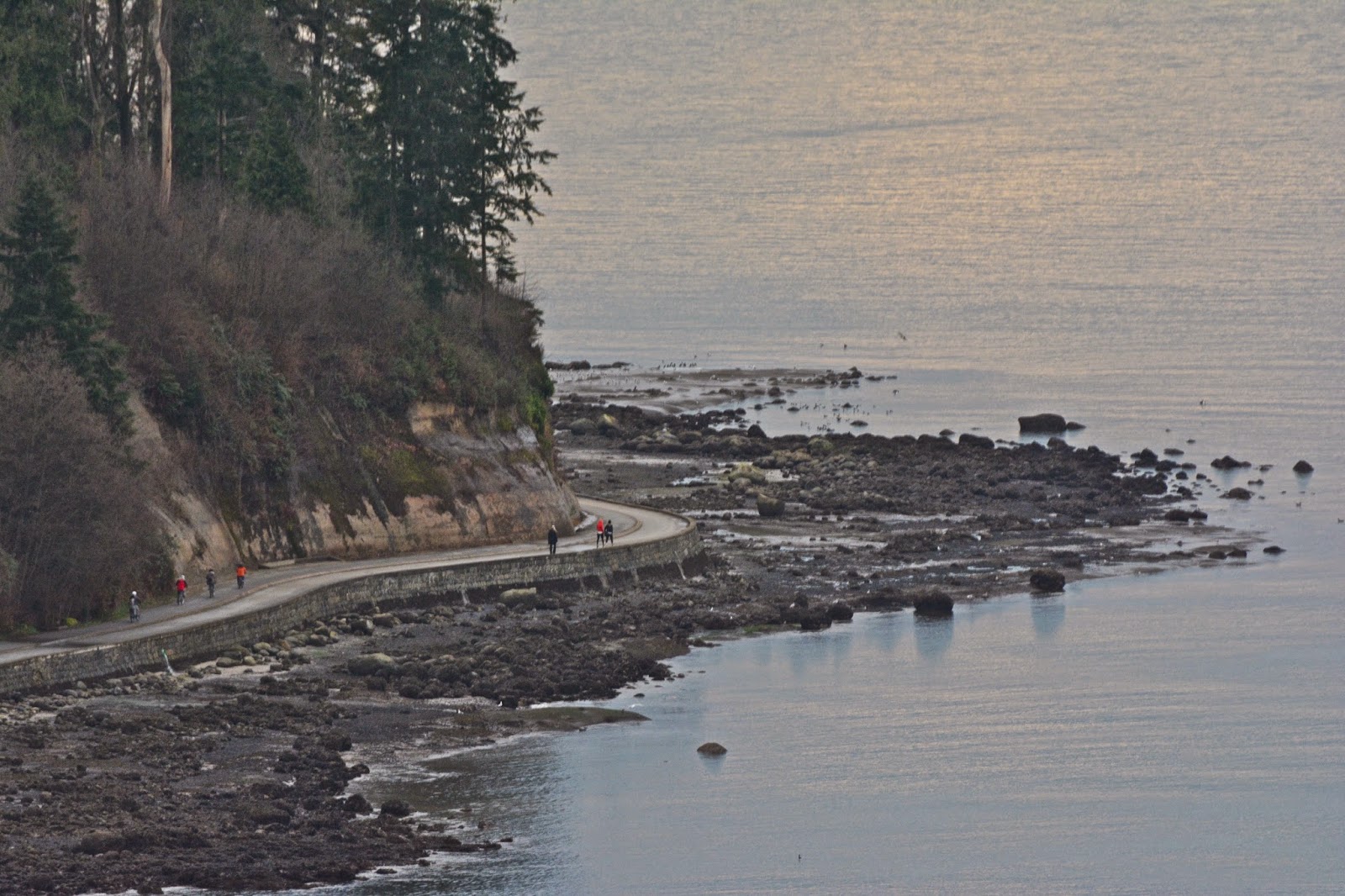 You are looking at the Stanley Park Seawall.  We have cycled its entirety.. 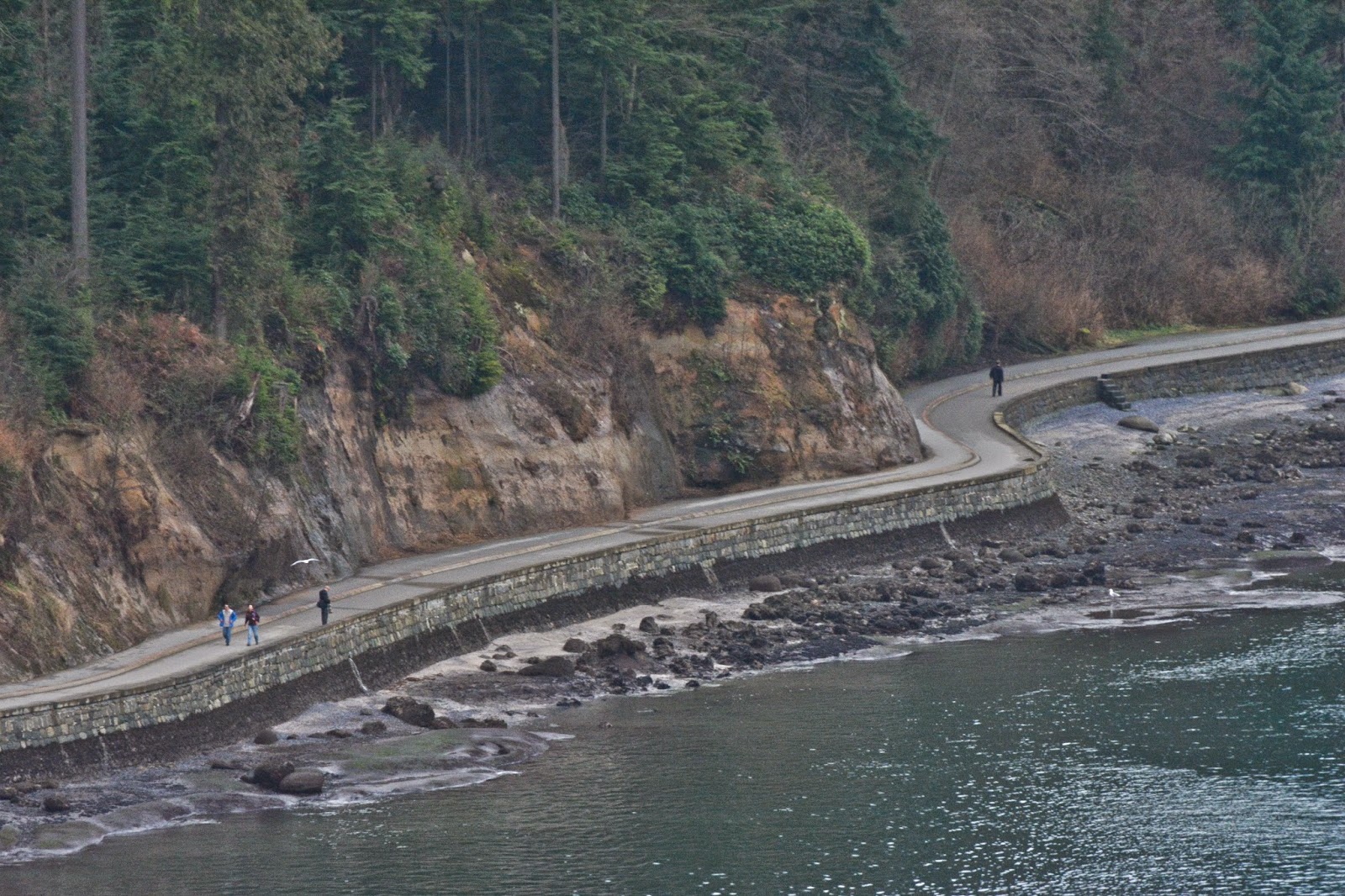 many times, and it makes for a most enjoyable ride. 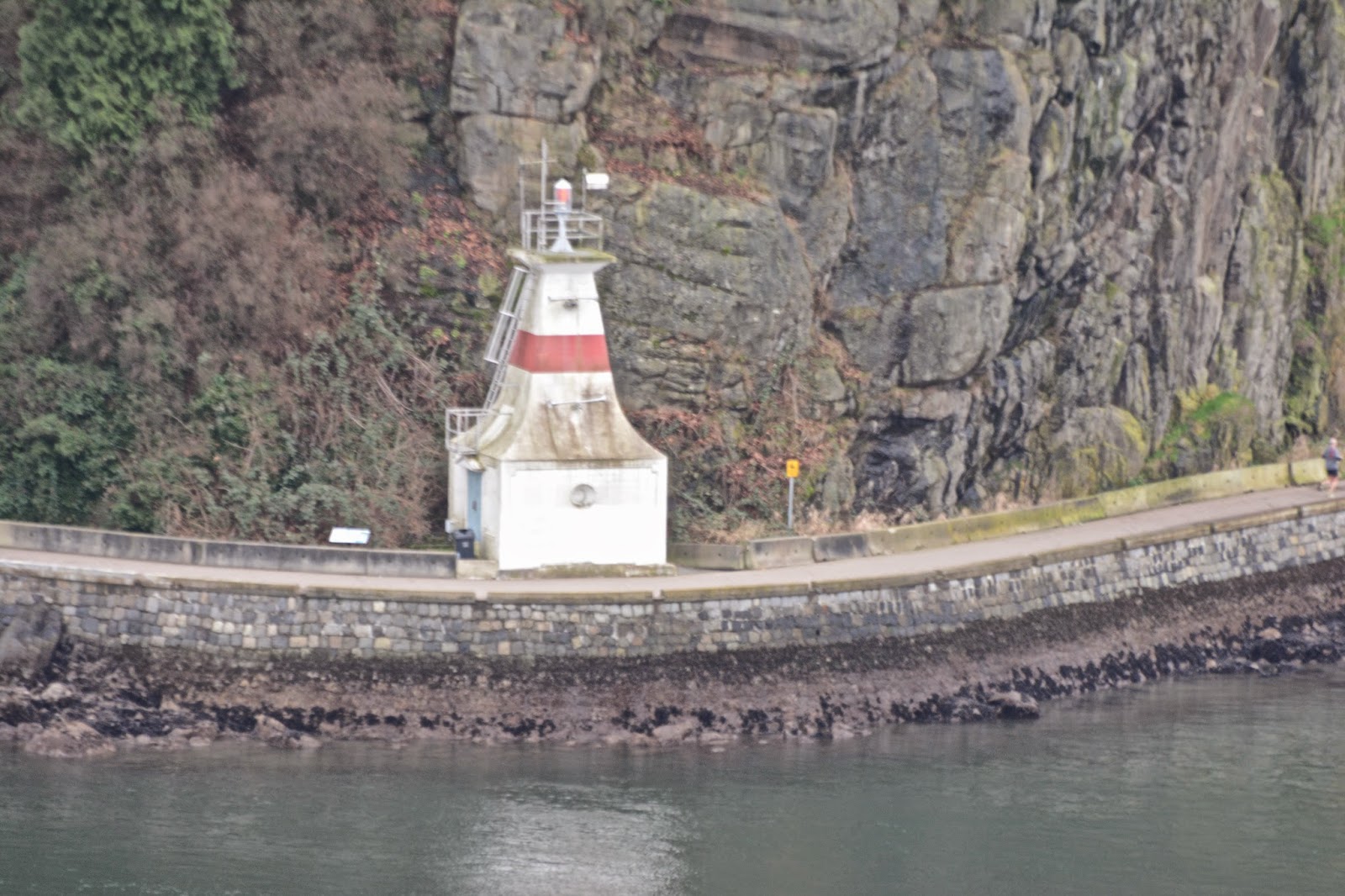 But just in case that is, in your estimation, a somewhat dubious connection to fences, here is one of the bridge fencing.  We were standing in a small lookout area..  and not hovering over the water :)  Note: I found a photo on Flickr by Jeremy, a fine photographer, showing a Lions Gate lookout.  Theresa, I think you would also enjoy his "Horse in the Sky" photo. 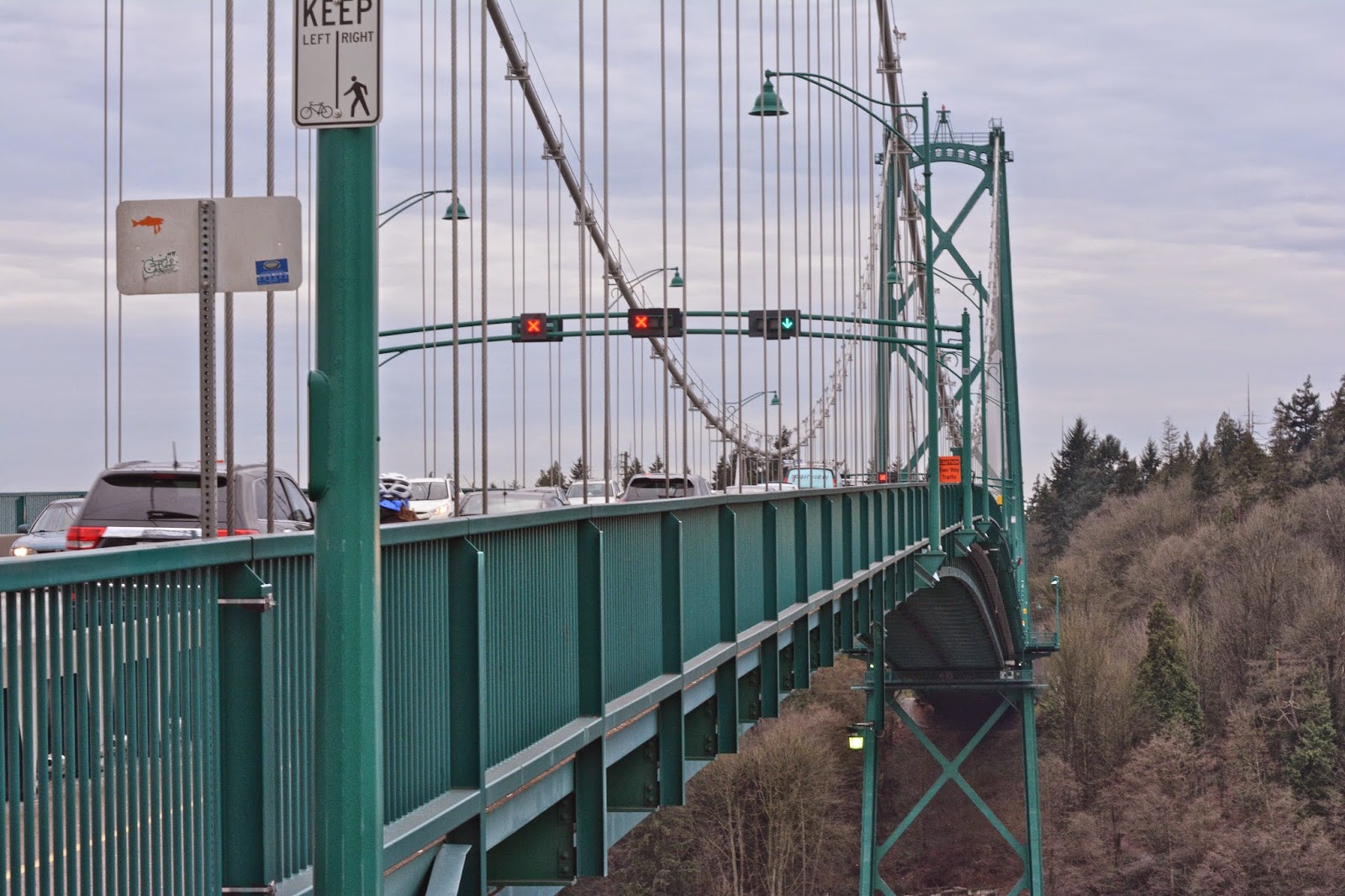 And, since I do like to embellish the post with a few unusual words to highlight the letter of the week, I'll go with a theme of freedom and wandering.  Again, a somewhat equivocal connection to fences, though the song, "Don't Fence Me In" as sung by Ella Fitzgerald..
may tie the idea together for you.

Here are some words found at the phrontistery site:
1. ecdomomania - abnormal compulsion for wandering
2. eleutheromania - a mania or frantic zeal for freedom (pronunciation here)
3. eleutherophobia - fear of freedom

And lastly, a pattern created by Jennifer Harrison at Harrison Galleries for our friend Jock's hot chocolate.  Our ride home had eventually taken us right there and Jock's impromptu visit was a happy ending to our ride.  Doesn't that etching remind you of some of the properties of a fence? 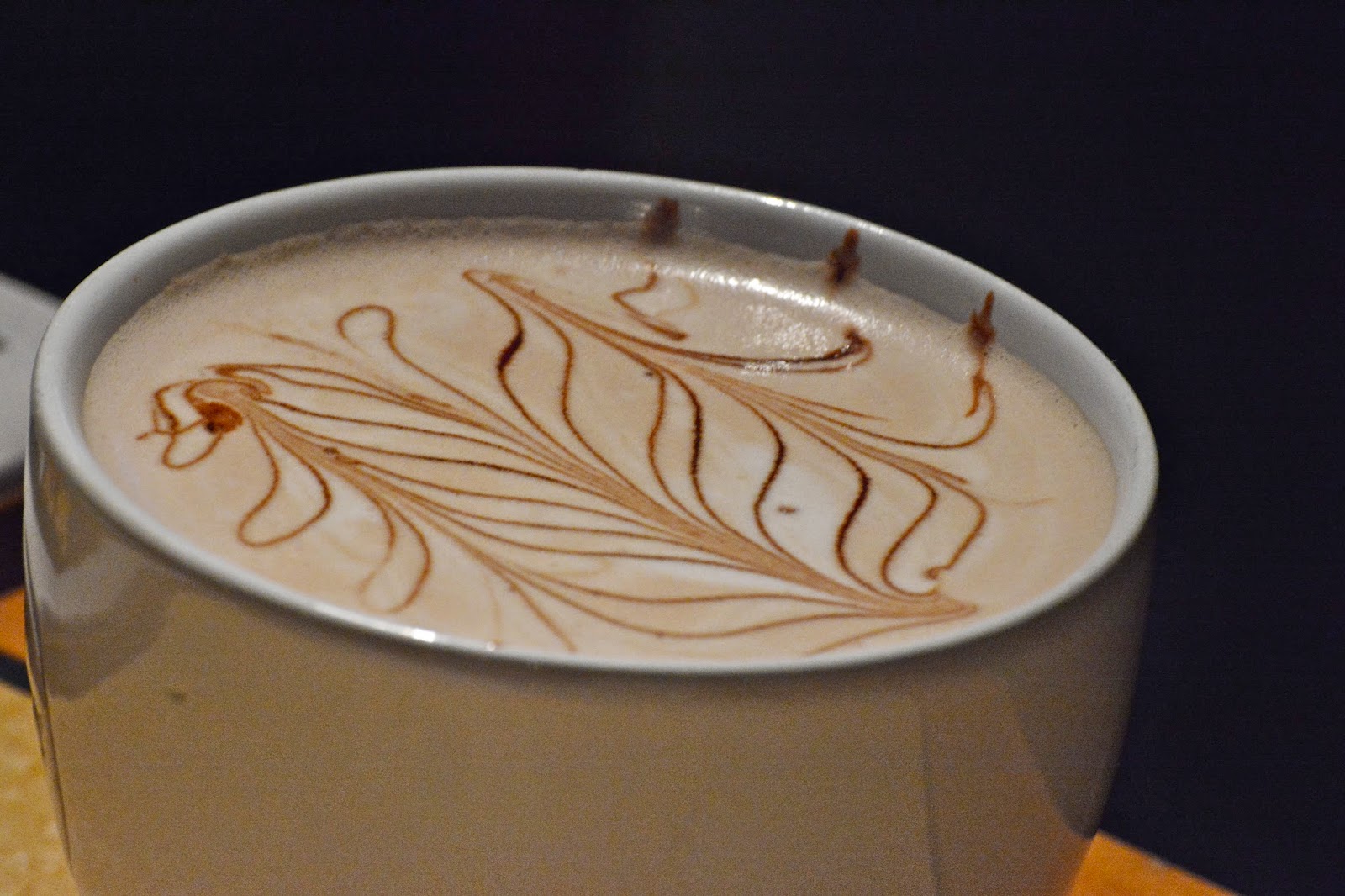 That's it for now.  Many thanks for stopping by.  For more "E" words, check out ABC Wednesday, and for more fences, hop on over to TexWisGirl's meme.  Happy Friday, everyone!