A Hodge-podge of Oranges

My contribution to Orange You Glad It's Friday arrives on Sunday this week.  Many thanks to Maria for hosting, and to you for stopping by.  If you spot a little or a lot of the color orange as you go about your days, you might want to snap a photo and join in.

We saw these shrubs in Stanley Park a few days ago.  They had quite a lovely glow about them, though there wasn't much light that day.  I've been trying to identify them and wonder if they might be Spirea Goldflame, but will welcome corrections if mistaken. 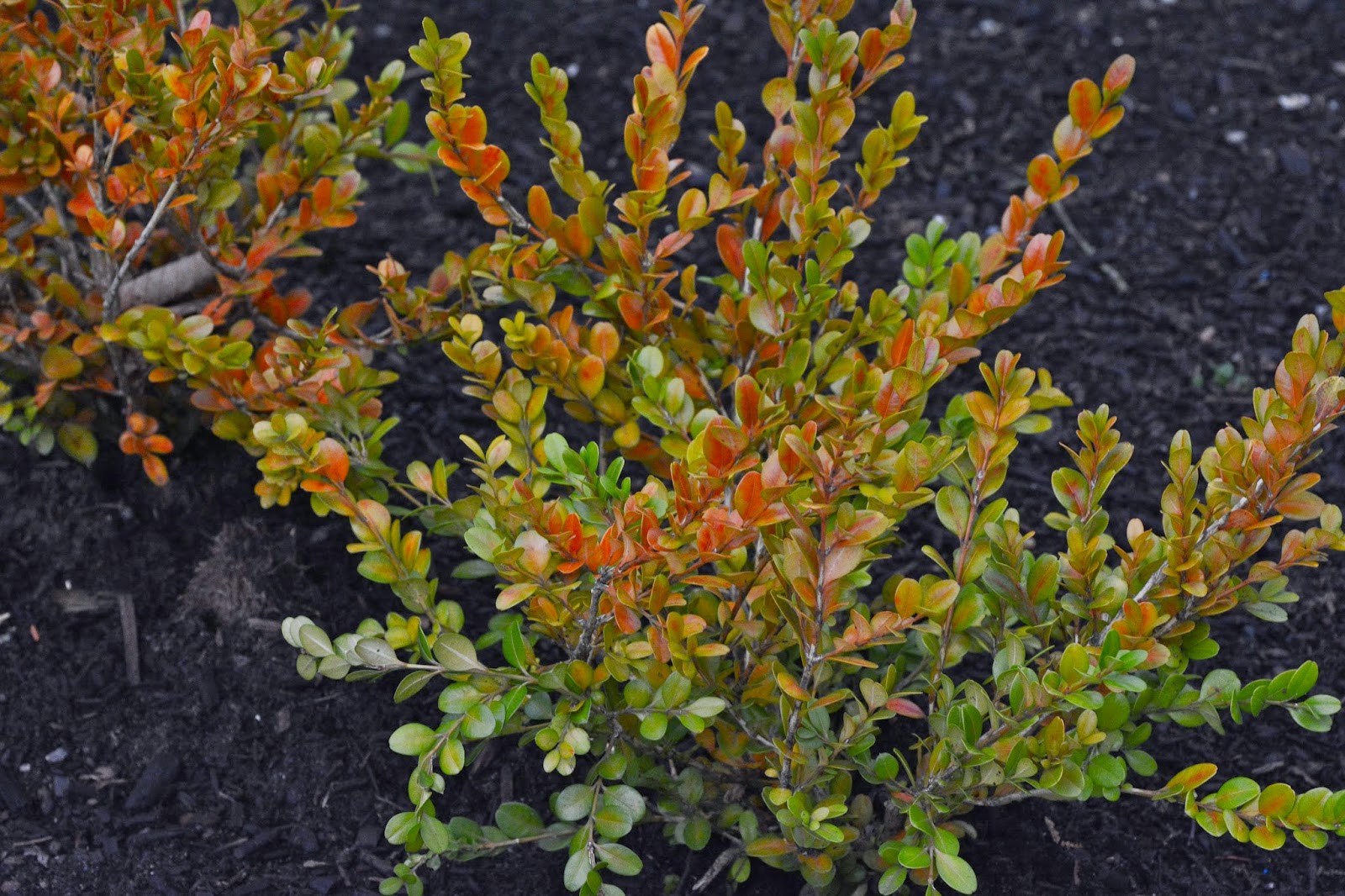 The Mute Swans of  Lost Lagoon joined the Mallards to beg for treats a few days ago.  They are fed by park staff and also by a lady whose name I have just discovered in this article.  We've seen her on many occasions  and I've always wondered about her story so was happy to find out a little more about her.  The article states that the swans' wings are clipped.  I wish that were true.  In fact, they are pinioned, a practice that in my opinion is inhumane. 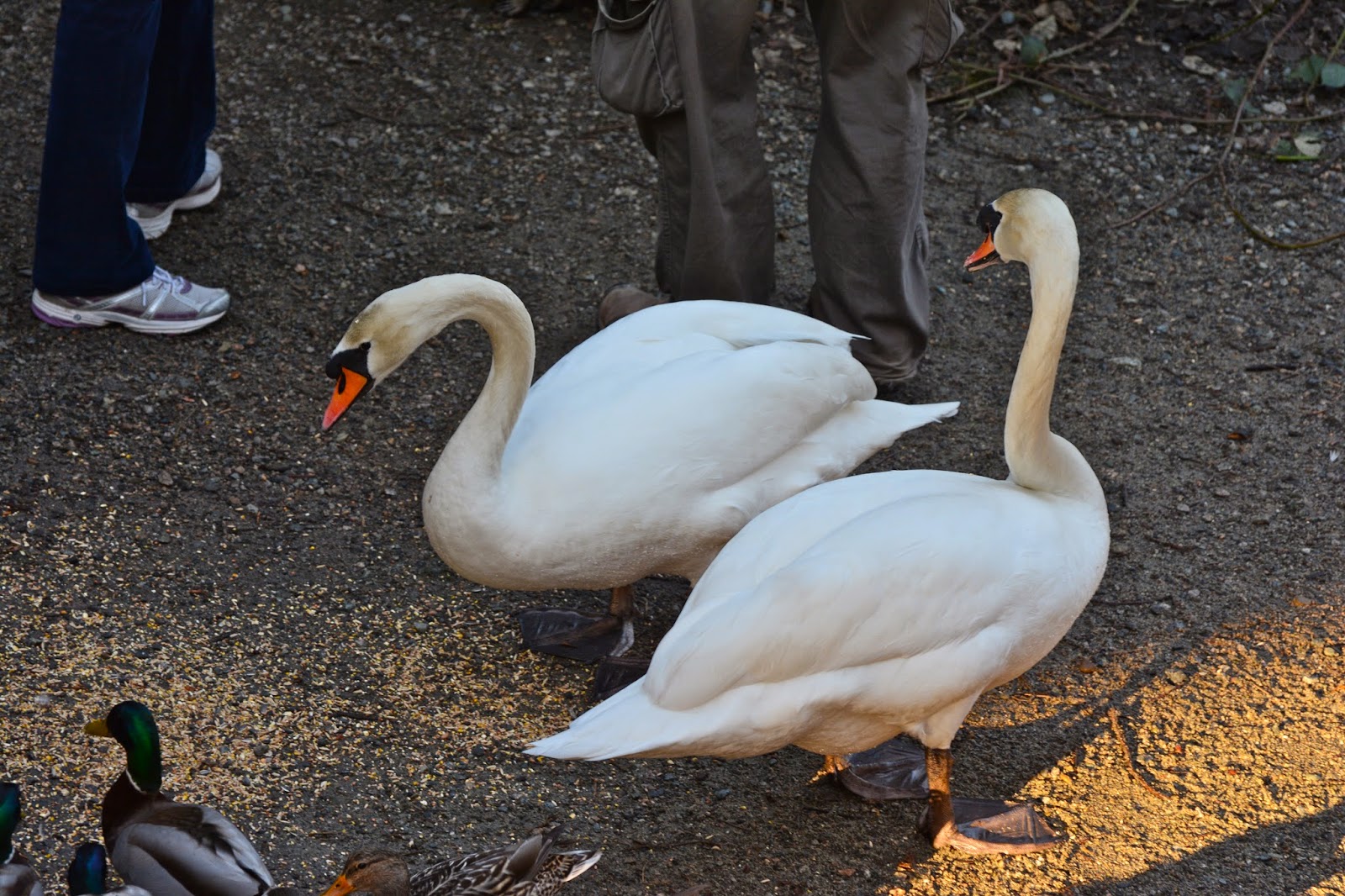 We watched the swans from a little bridge over the lagoon.  There was just a hint of orange in the mesmerizing branch reflections in the water.  If you look closely, you can see some birch tree patterns here. 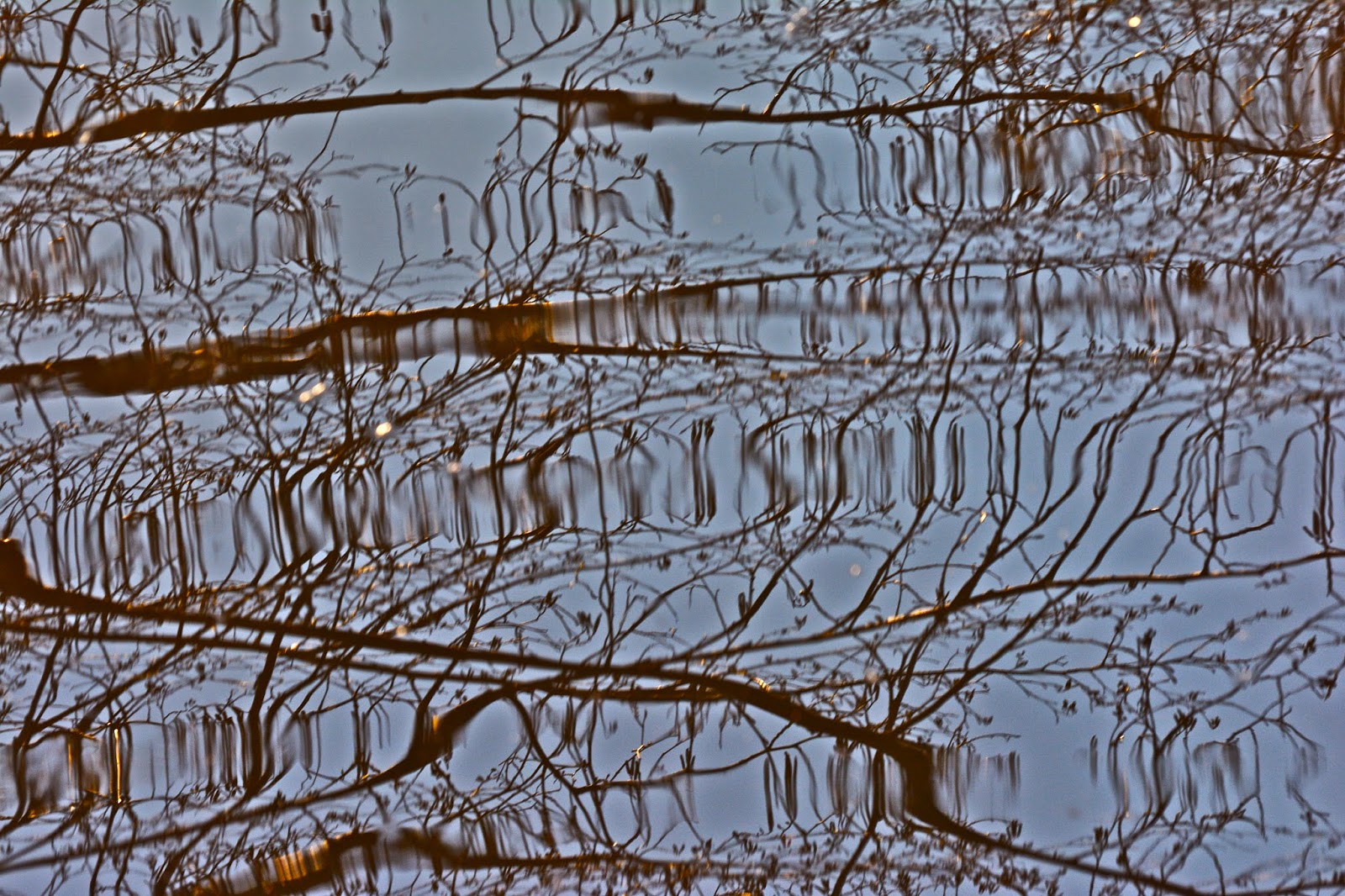 Though we have fed unsalted peanuts to the birds in another part of the park, we had never done so by the lagoon.  I love the focus in Bill's face as this little chick-a-dee arrives. 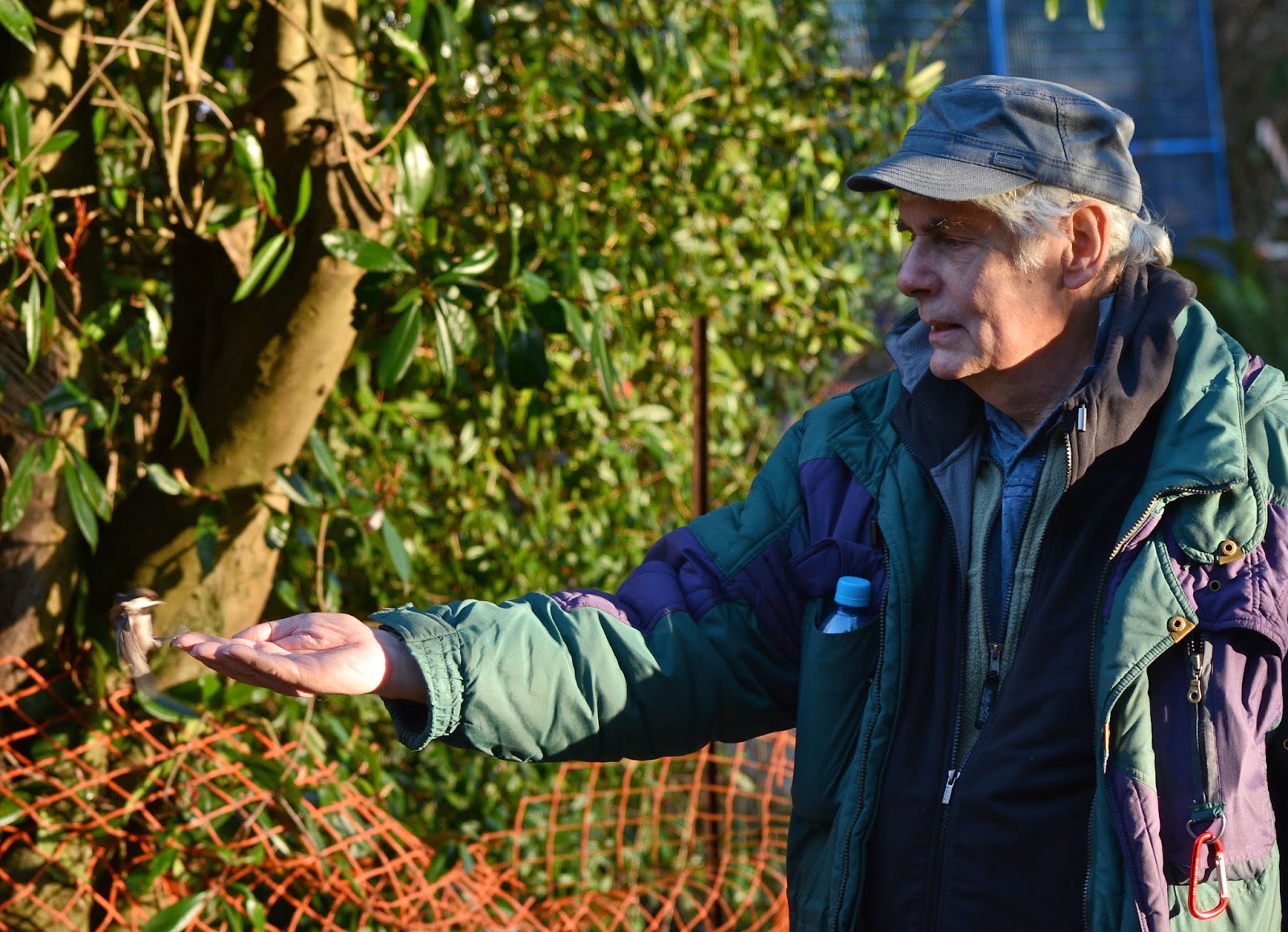 I'm not sure if the orange netting is meant to keep the racoons off the little bridge, but you can see an opening that has most likely been shaped just to their liking :)  I didn't take photos of them, but we saw several. 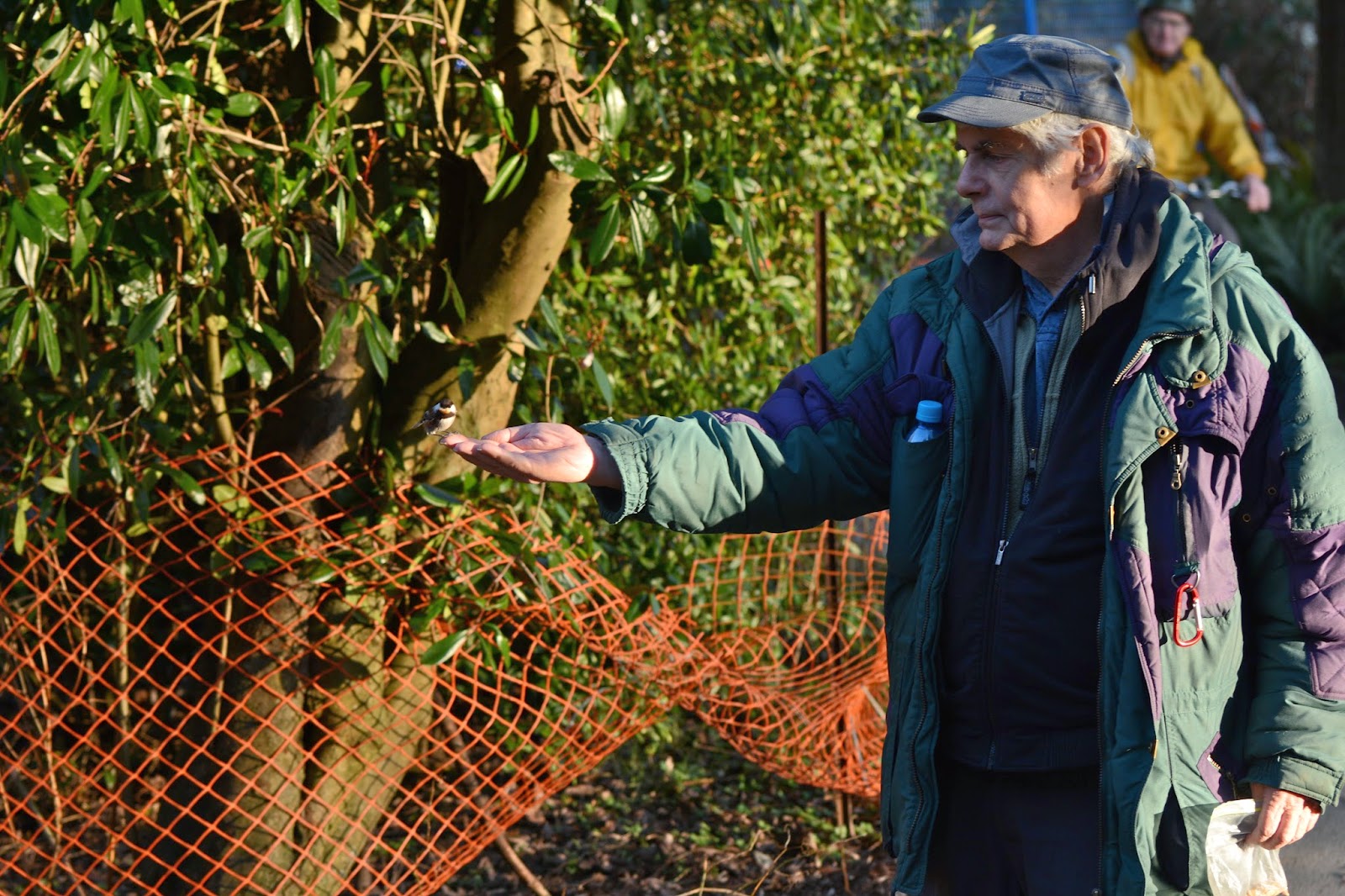 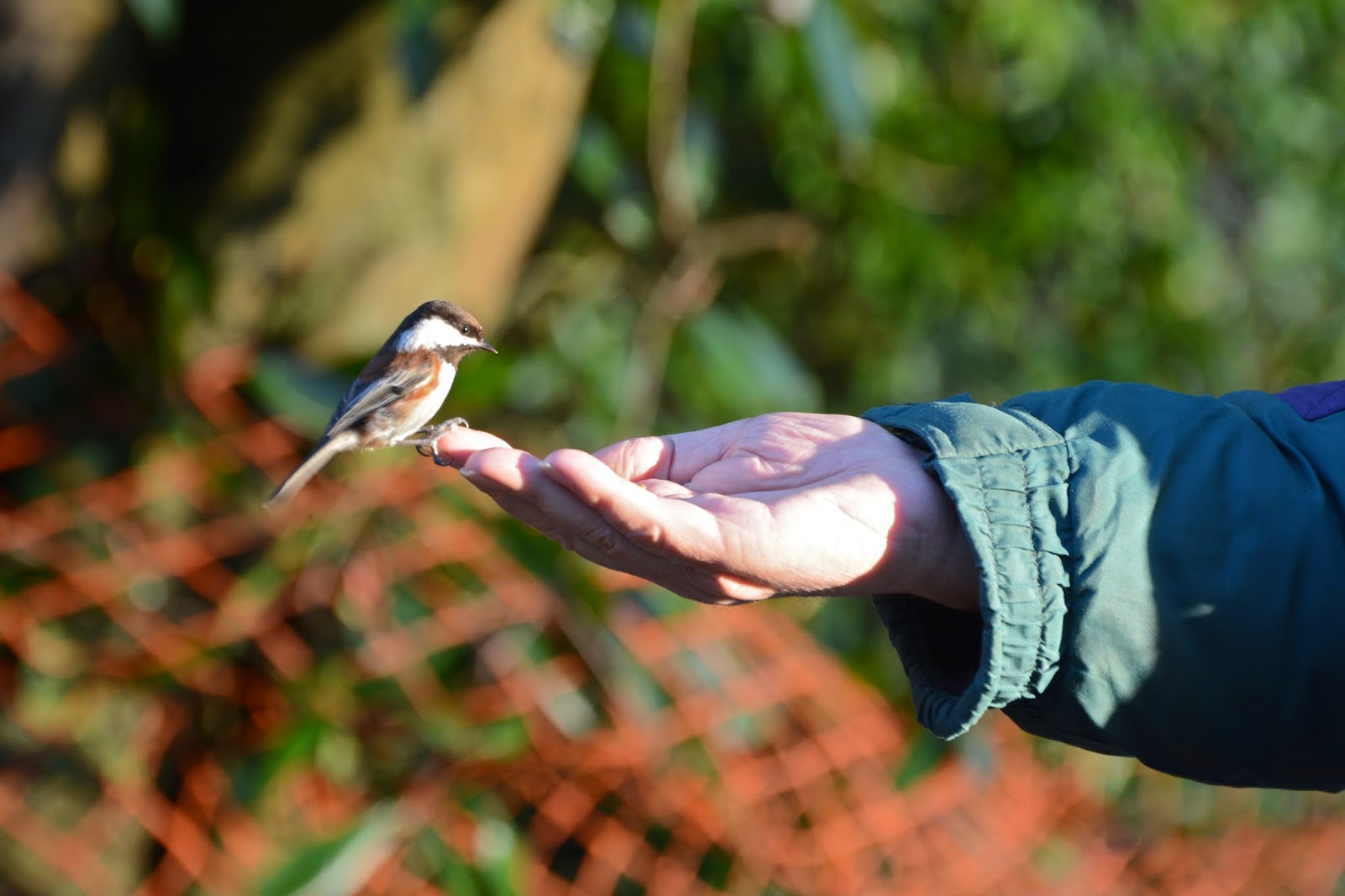 Though it was a bright sunny day, most of the critters were hanging out in areas with little to no light.  The sun found a way, though, to draw an outline around this heron. 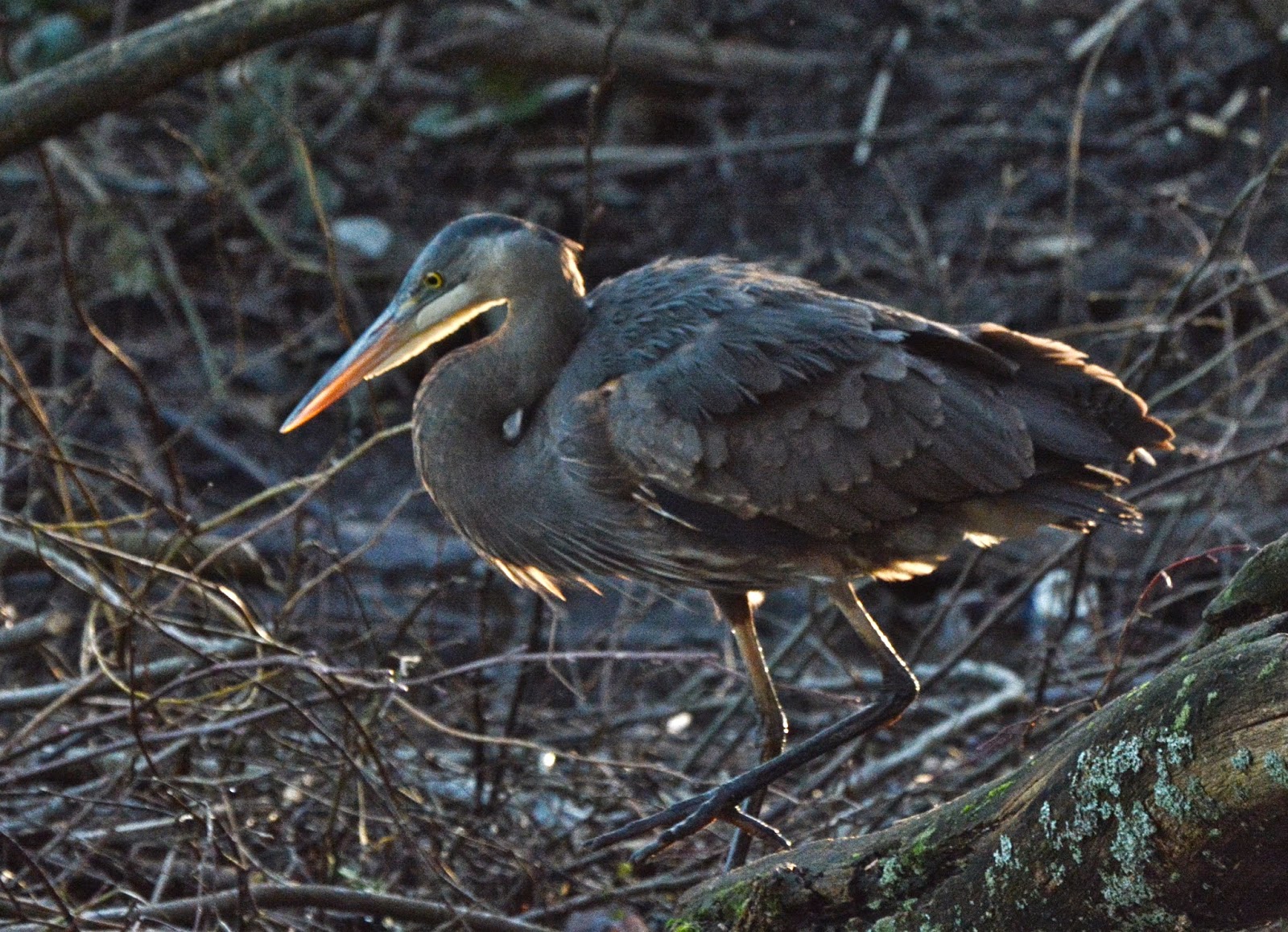 S/he must have nabbed a sizable catch here. 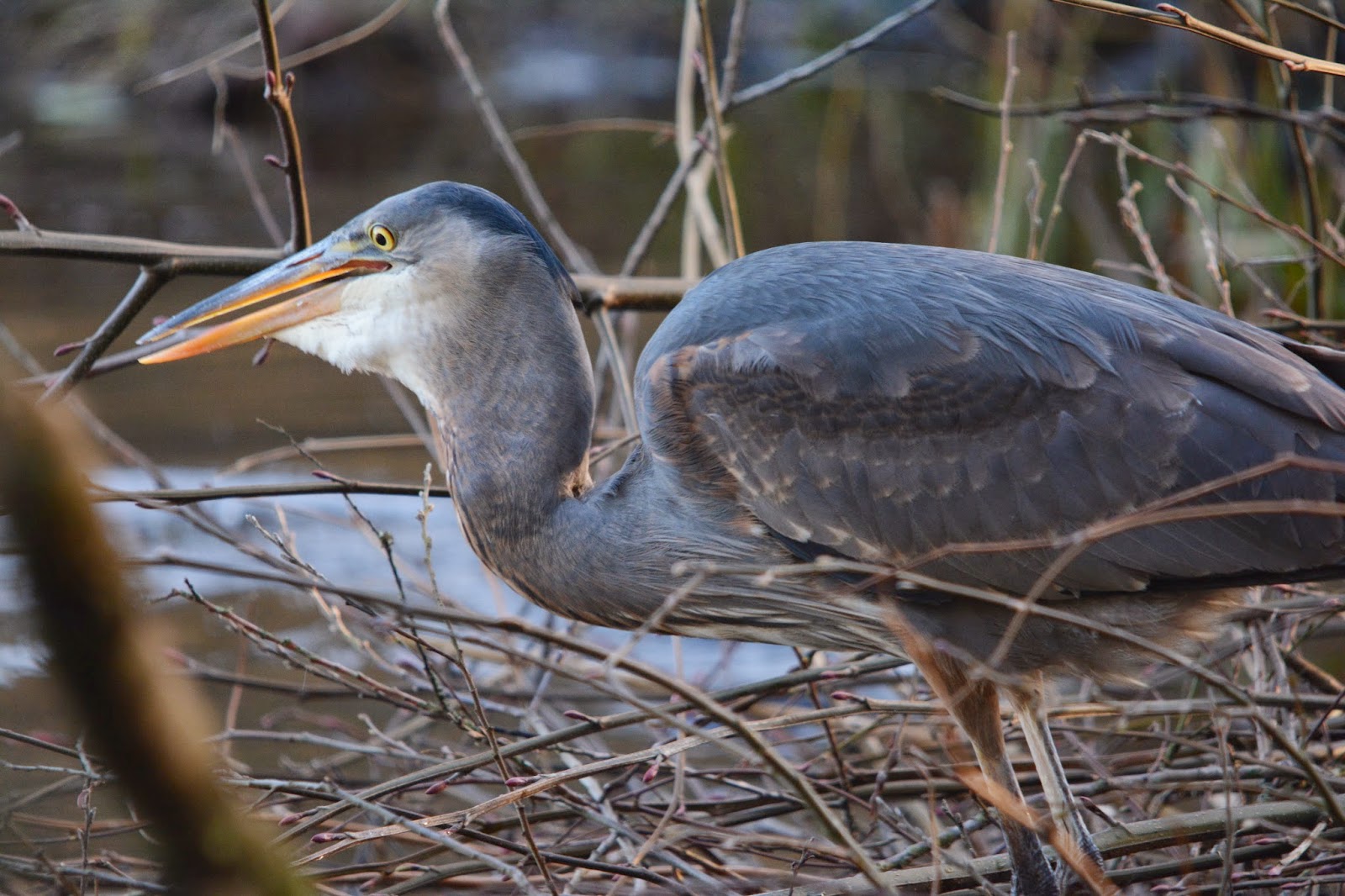 Most of the otter shots will appear in Eileen's Saturday's Critters post (hopefully later today), but thought you might enjoy the lit-up eyebrows and water reflections in this one. 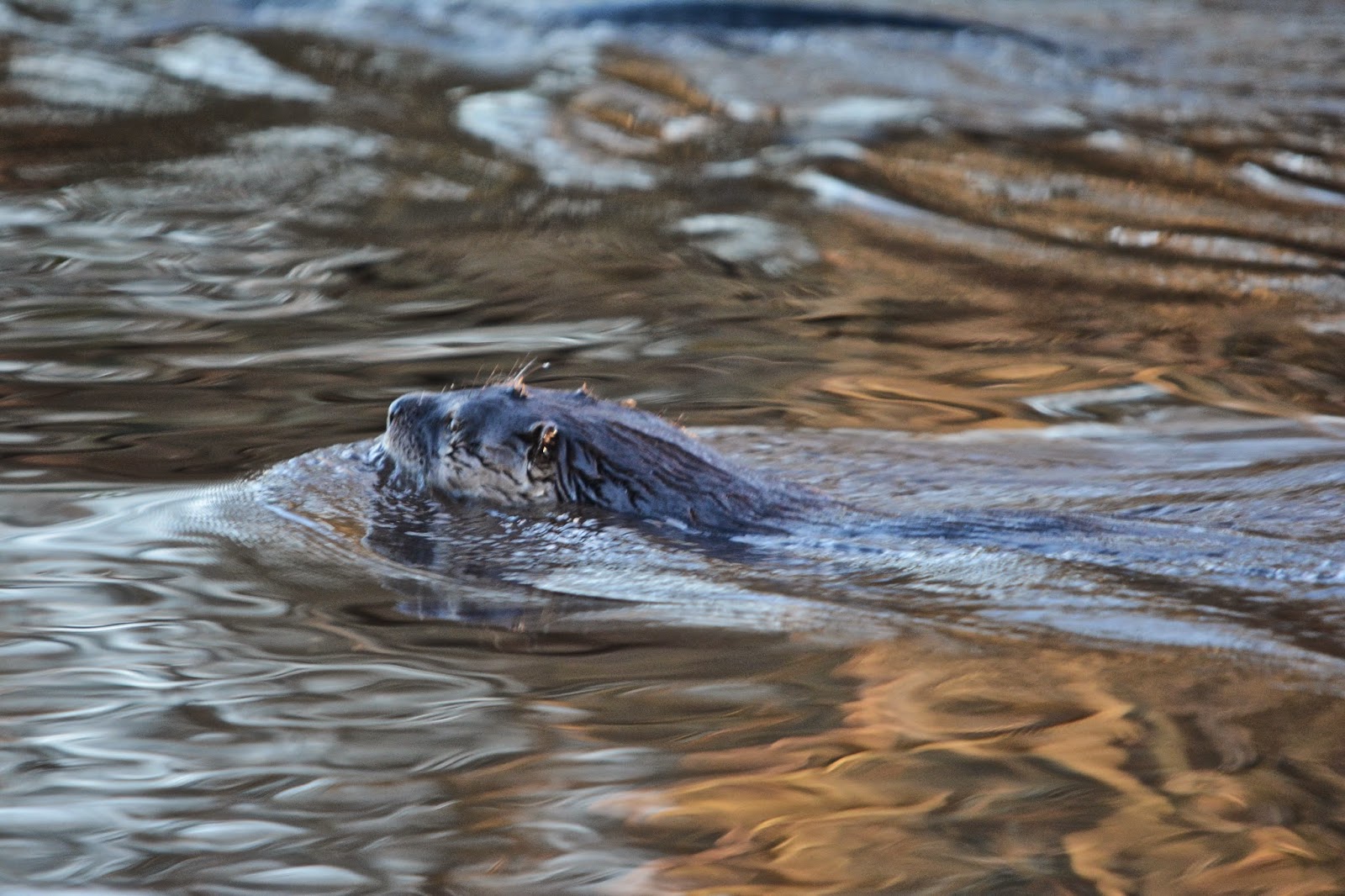 Here's a view of the lagoon glowing in the late afternoon sun. 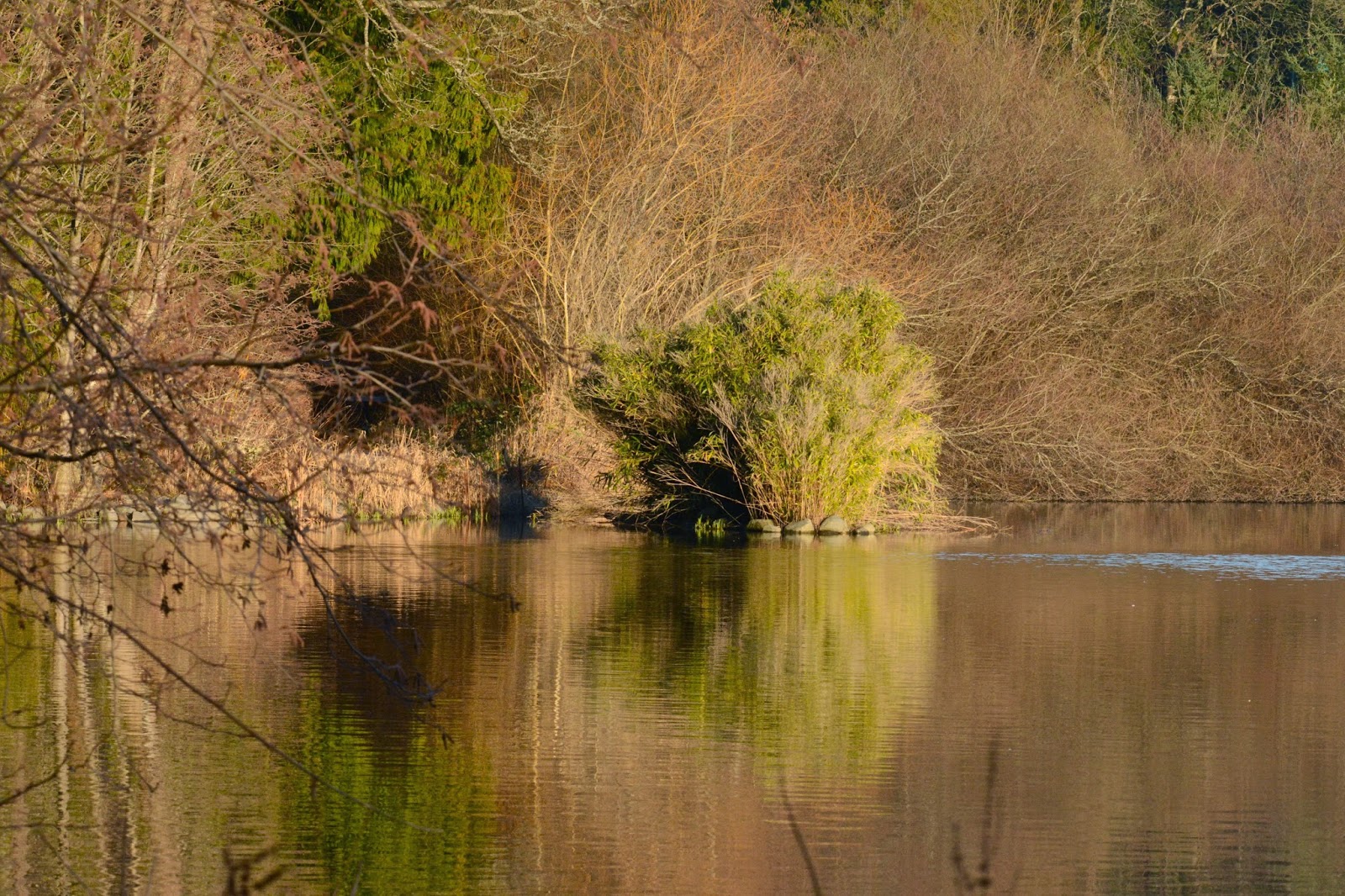 The next ten photos were taken in Olympic Village Park near the Cambie Bridge. Thursday, was a windy but beautiful day, and we saw lots of orange around us.  Bill though this buoy (or marker?) looked like a bottle of wine.  I did a quick search to see if I could figure out its purpose and realize there is a lot to learn about this topic, so for now, we'll go with Bill's assessment :) 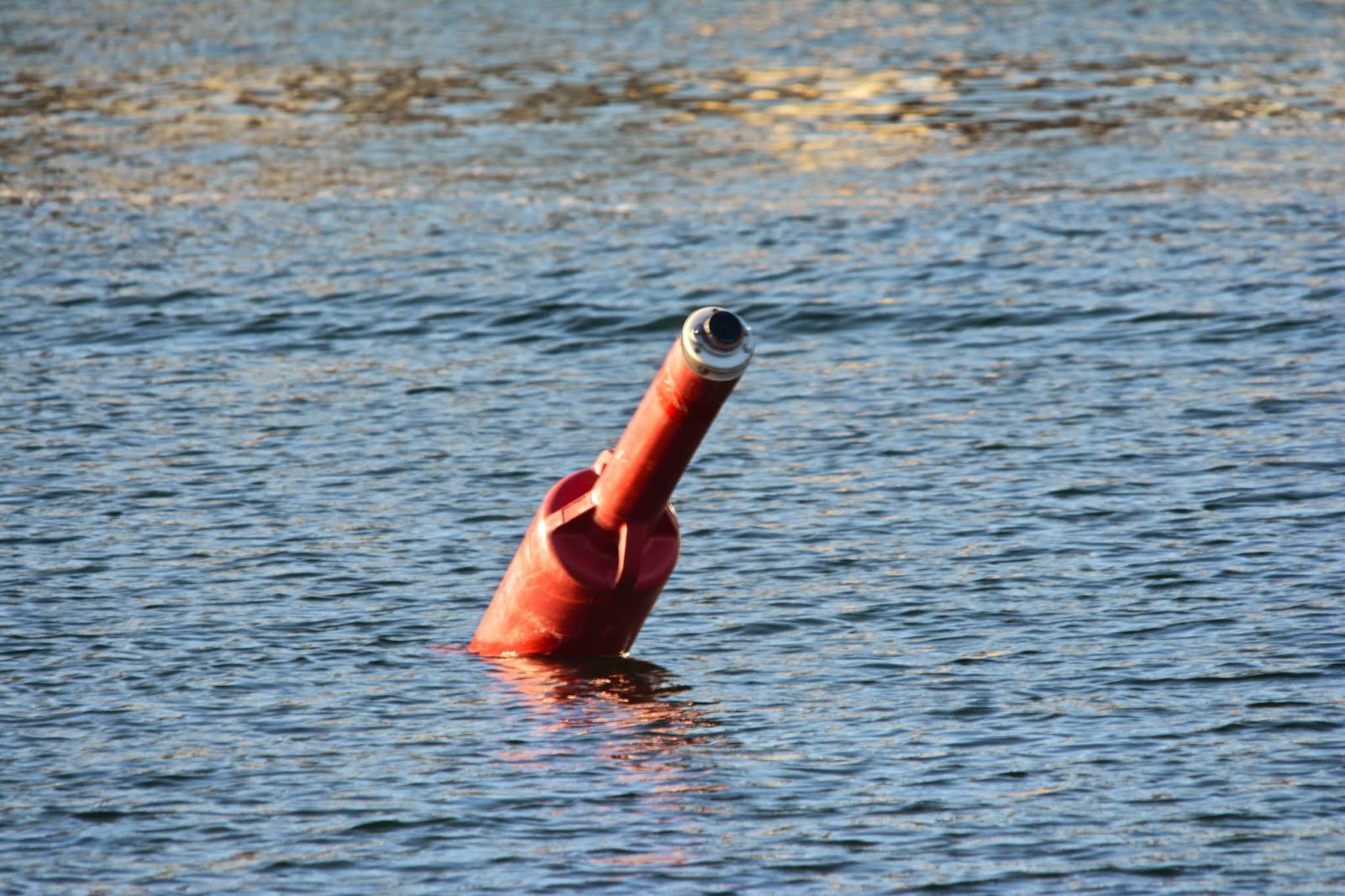 We've met and talked twice with a fellow in this park who perhaps faces some difficulties in his life.  He's usually sipping a beverage and he keeps to himself but he knows something of the wildlife and the other day, he talked of the beautiful sunset enjoyed that morning.  The person in this photo is not that same gentleman and I have no idea if the cart is connected to either or both of them, but I took the photo respectfully, certainly for the orange.. 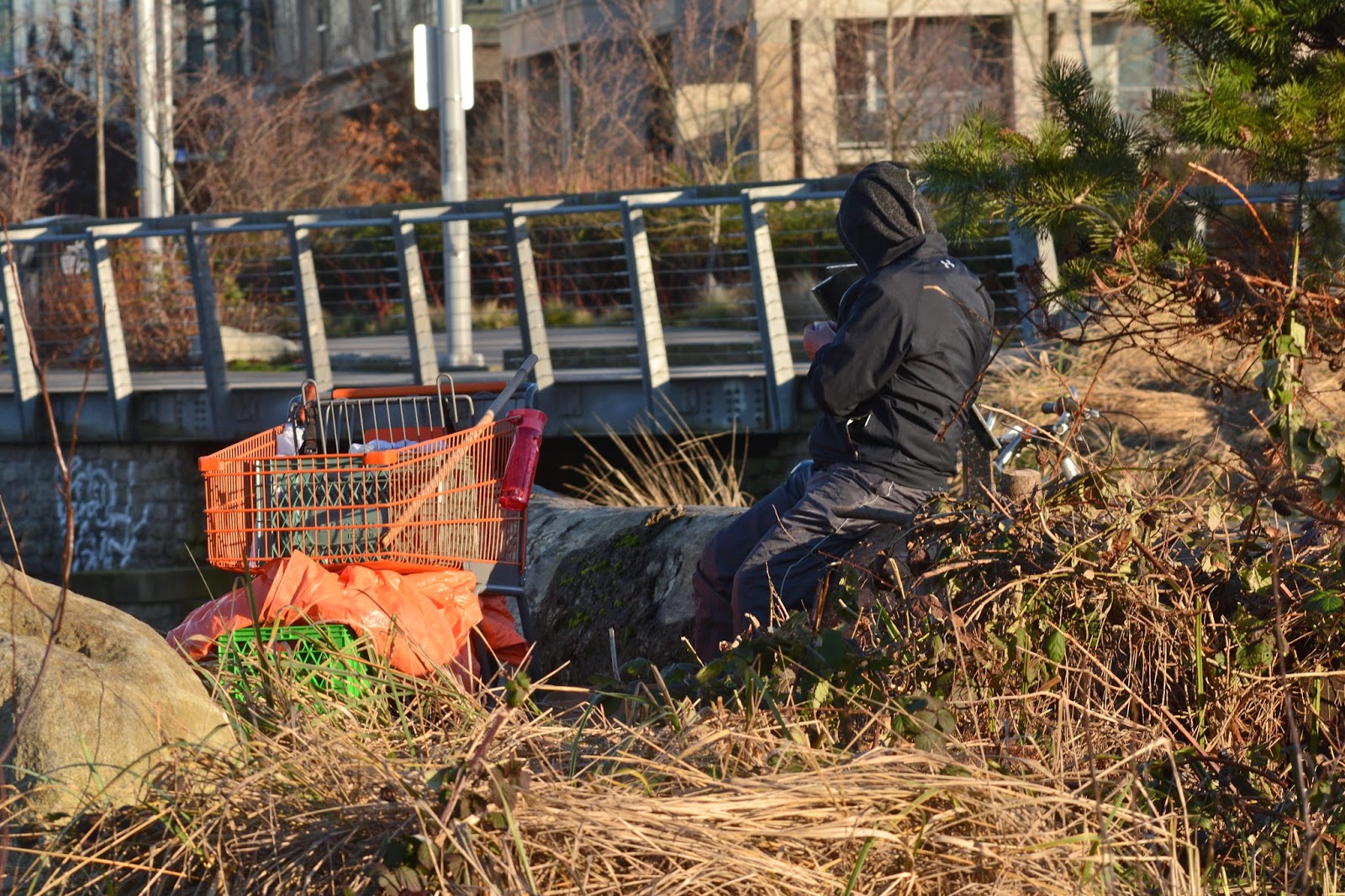 content, but also to express my thoughts about the complexity of issues we face in seeking the best solutions for those battling addictions and/or homelessness. 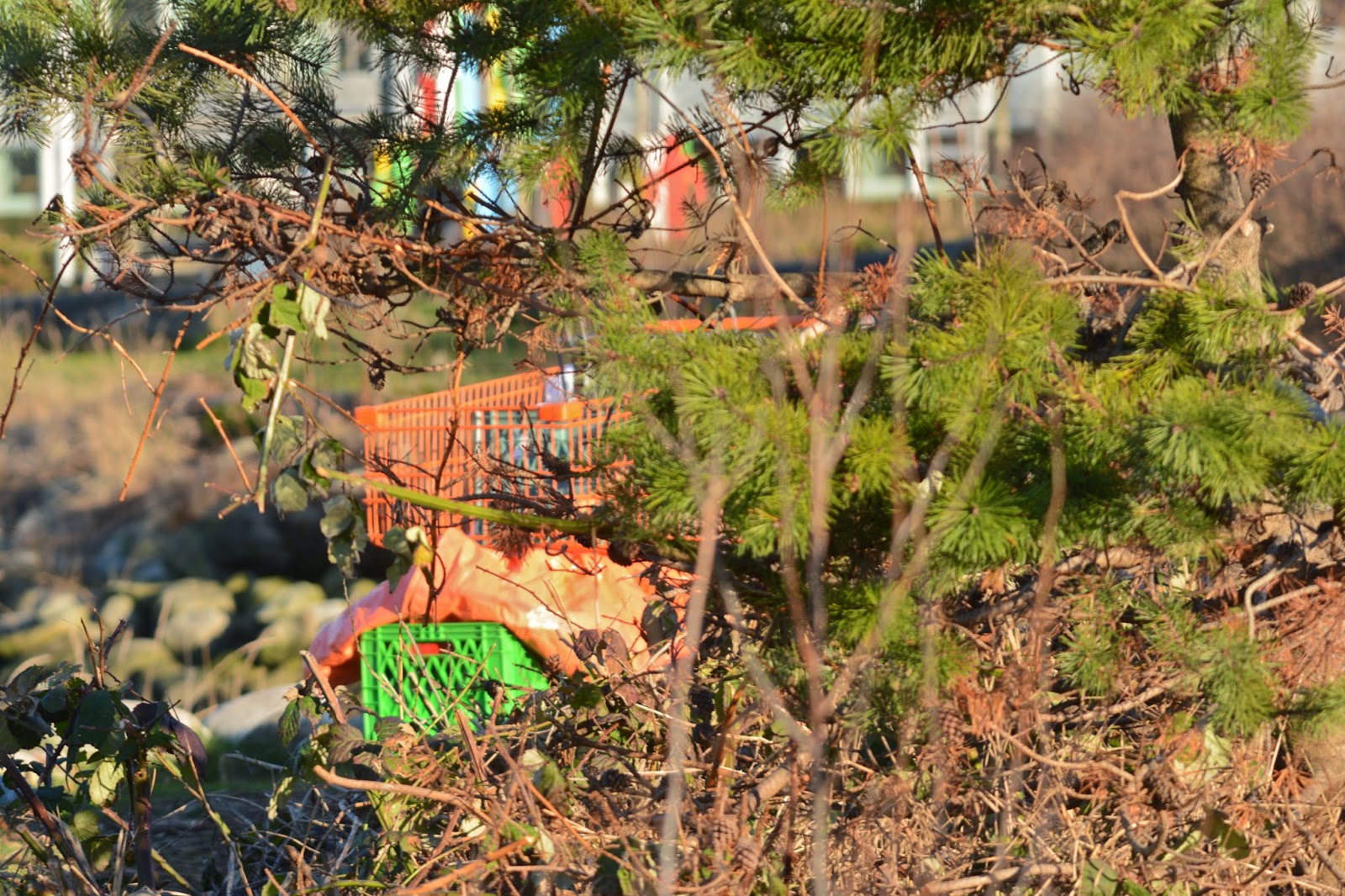 The gentleman we talked to appears to be content.  I hope he will stay safe and able to enjoy life on his own terms.  A couple of days ago, CBC television did an excellent documentary on the story of a lady named Marlene Bird.  Her life was not a good one by most people's standards, but she managed to get by for many years.  Then one day, she was attacked and horribly injured.  No longer able to be independent, she struggles now to find some kind of life that will be tolerable. I thought of her when we spoke with the gentleman and when we saw the cart.  I don't have solutions but I do know we have got to look into the hearts of the people we meet.  Perhaps, that is the only way to make the world a gentler place. 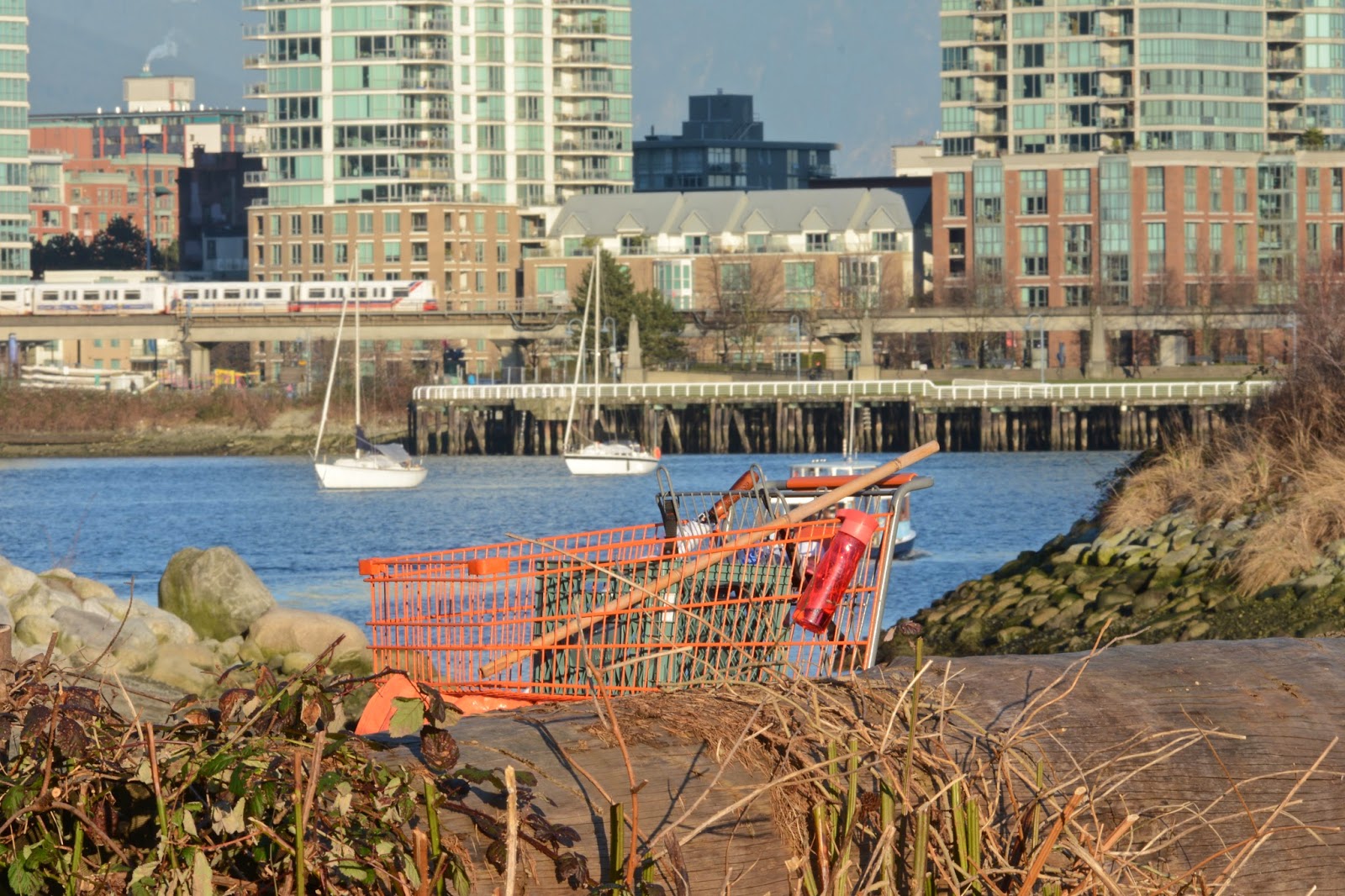 On the other side of the bike path, this Redwing sat by a stream.  Have you noticed that there is a small bit of orange under their red markings? 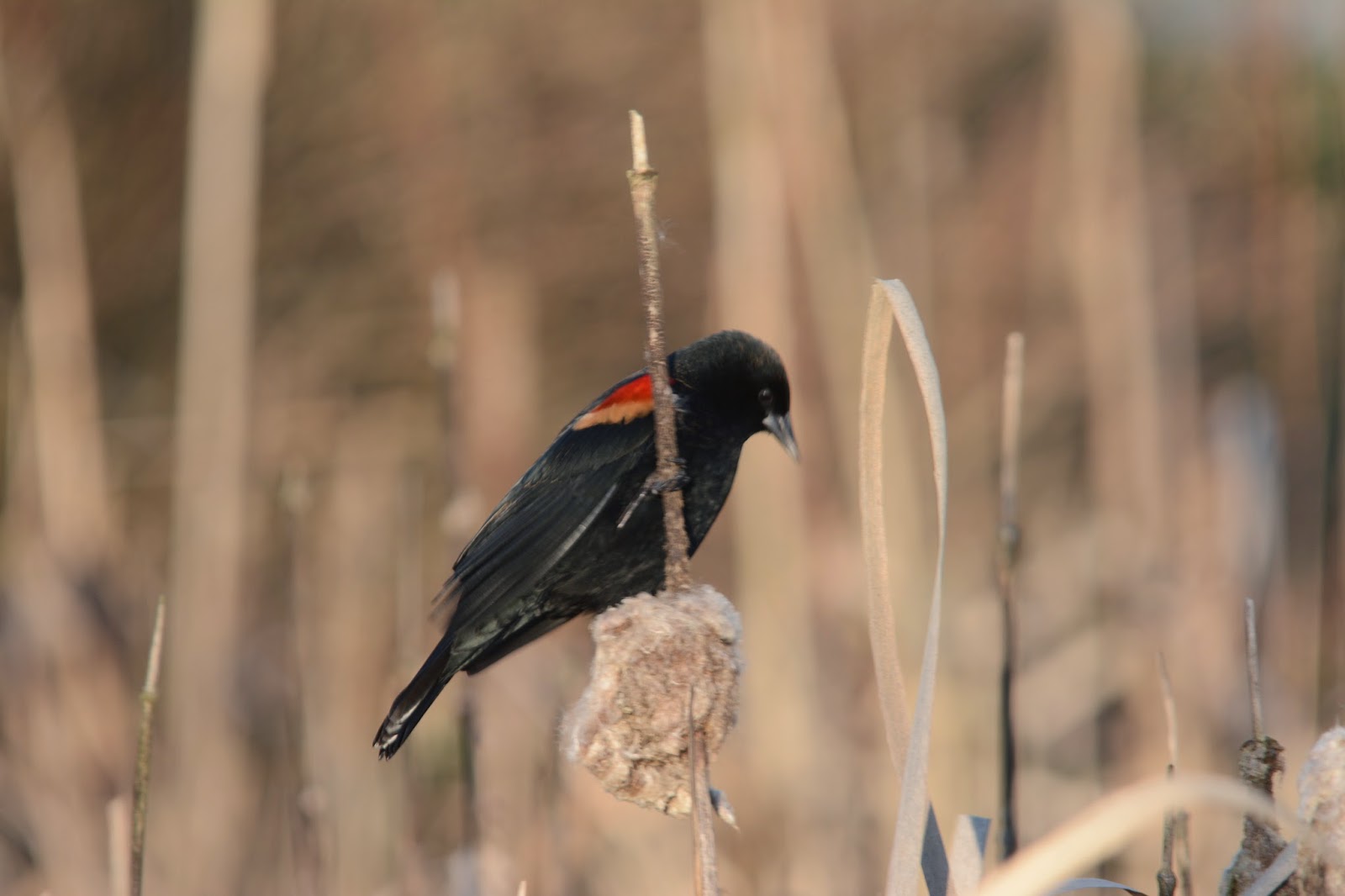 The crows arrive by the thousands each afternoon.  I think this park may be a meeting place before they fly to Burnaby to roost for the night.  Most stayed in the trees but some gathered on this shoal. 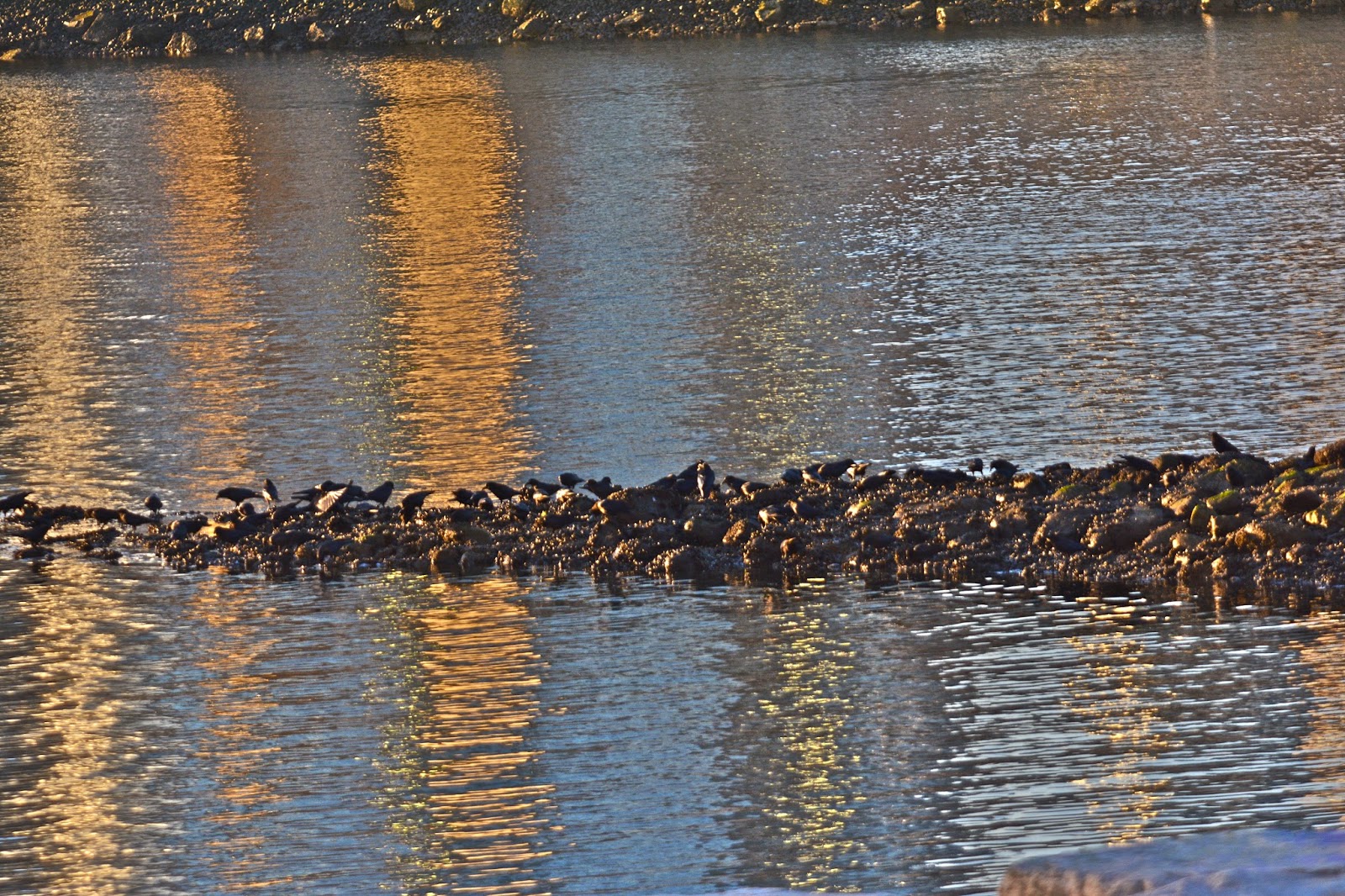 As we were preparing to get back on our bikes for the ride home, I noticed this dog (perhaps a Vizsla?). 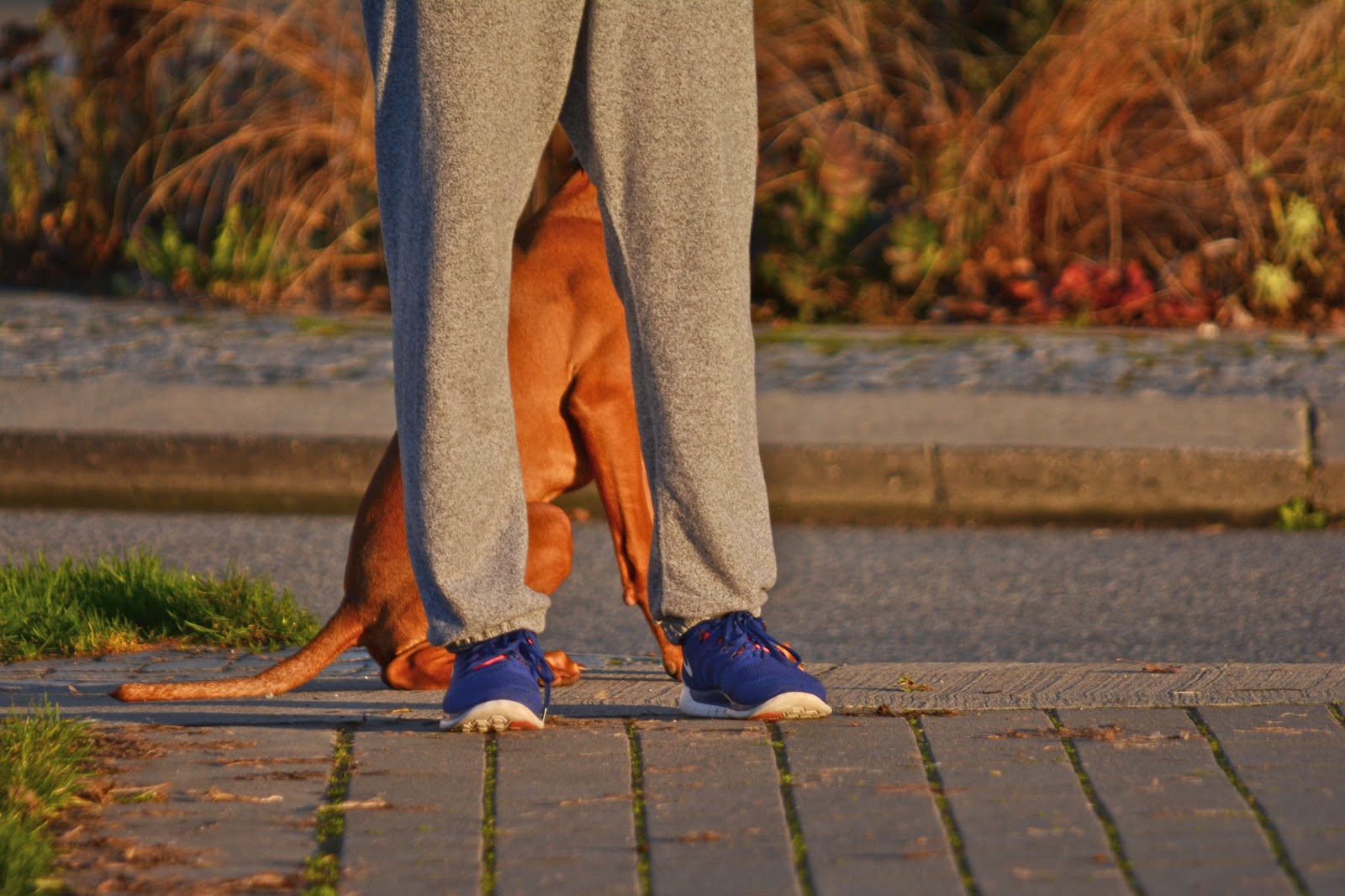 The sun brought out distinctly orange highlights and I began to take photos.  The dog's human talked with us, struggling all the while to gain control over his 6-month-old charge.  The dog had spotted Black Jack and was determined to approach. 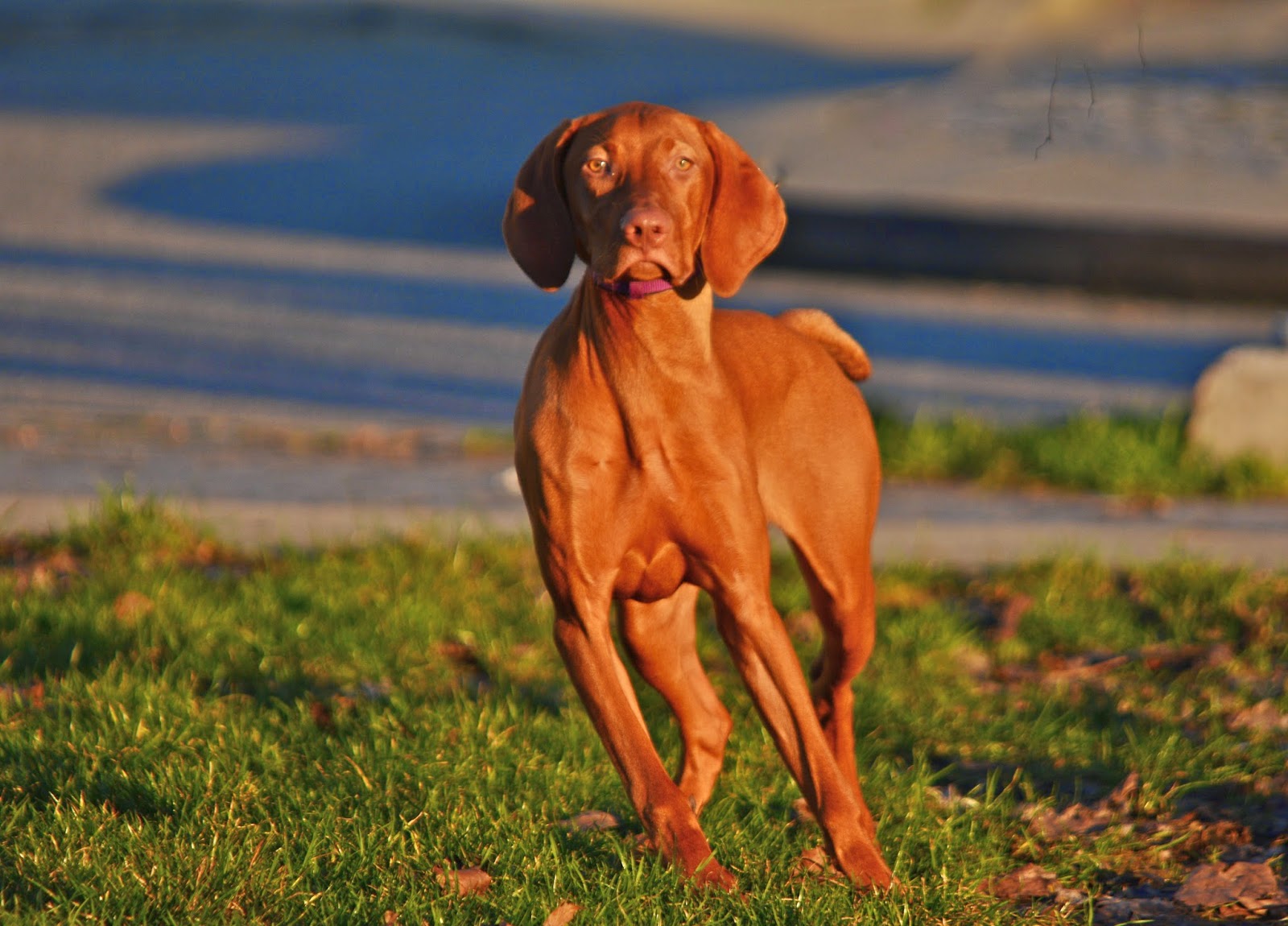 We knew a meet-up wouldn't be advisable.  Hard to believe a six-month-old could.. 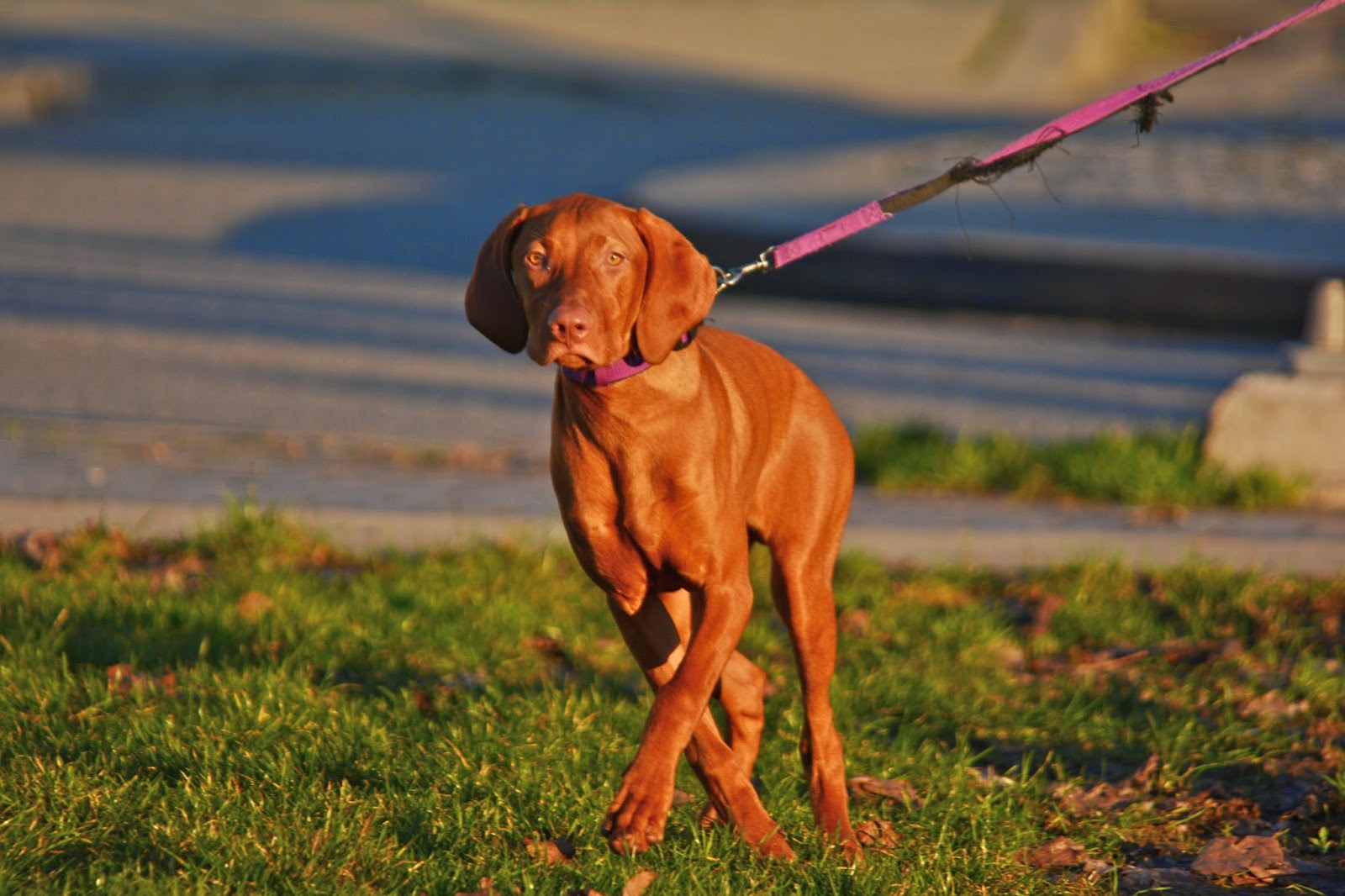 be that strong and that determined, but s/he was.  And, what a beauty!  I hope she, too, will have a safe and happy life. 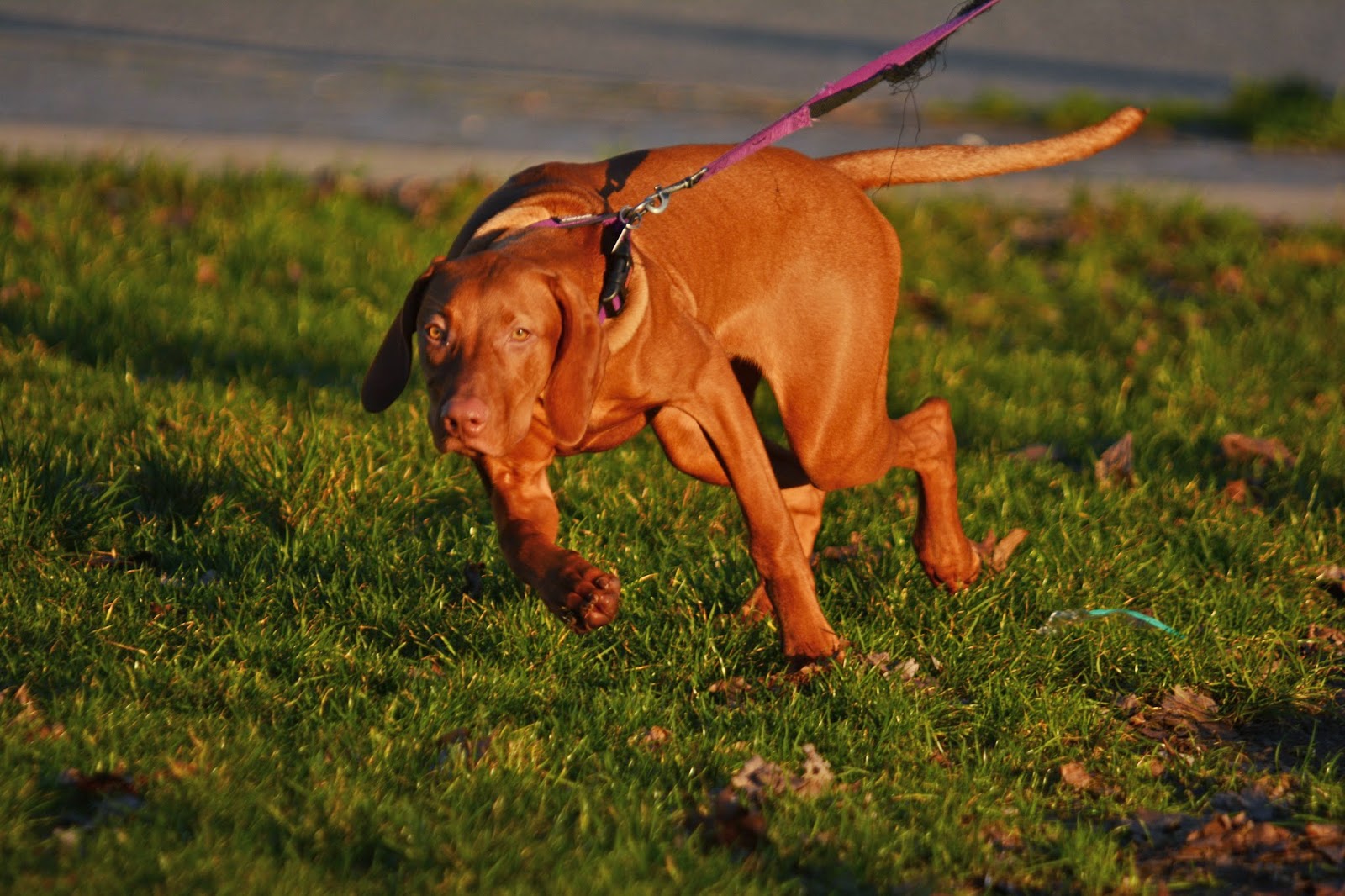 On Friday evening we visited the Vancouver Art Gallery.  I hope to write more about that visit, but for now, here are two of the orange-content photos I took.  This is by Yun-Fei Ji..

and these were part of a multimedia, interactive installation-recital titled "Lang(lang)uage" that explores the surge of piano playing, and piano-playing prodigies, in mainland China.  There was a piano keyboard that people were encouraged to play, and each note triggered images that flashed on the wall.  I still haven't figured out the connection to this pottery placed on a table behind the piano, but I thought the shot was somewhat interesting :) 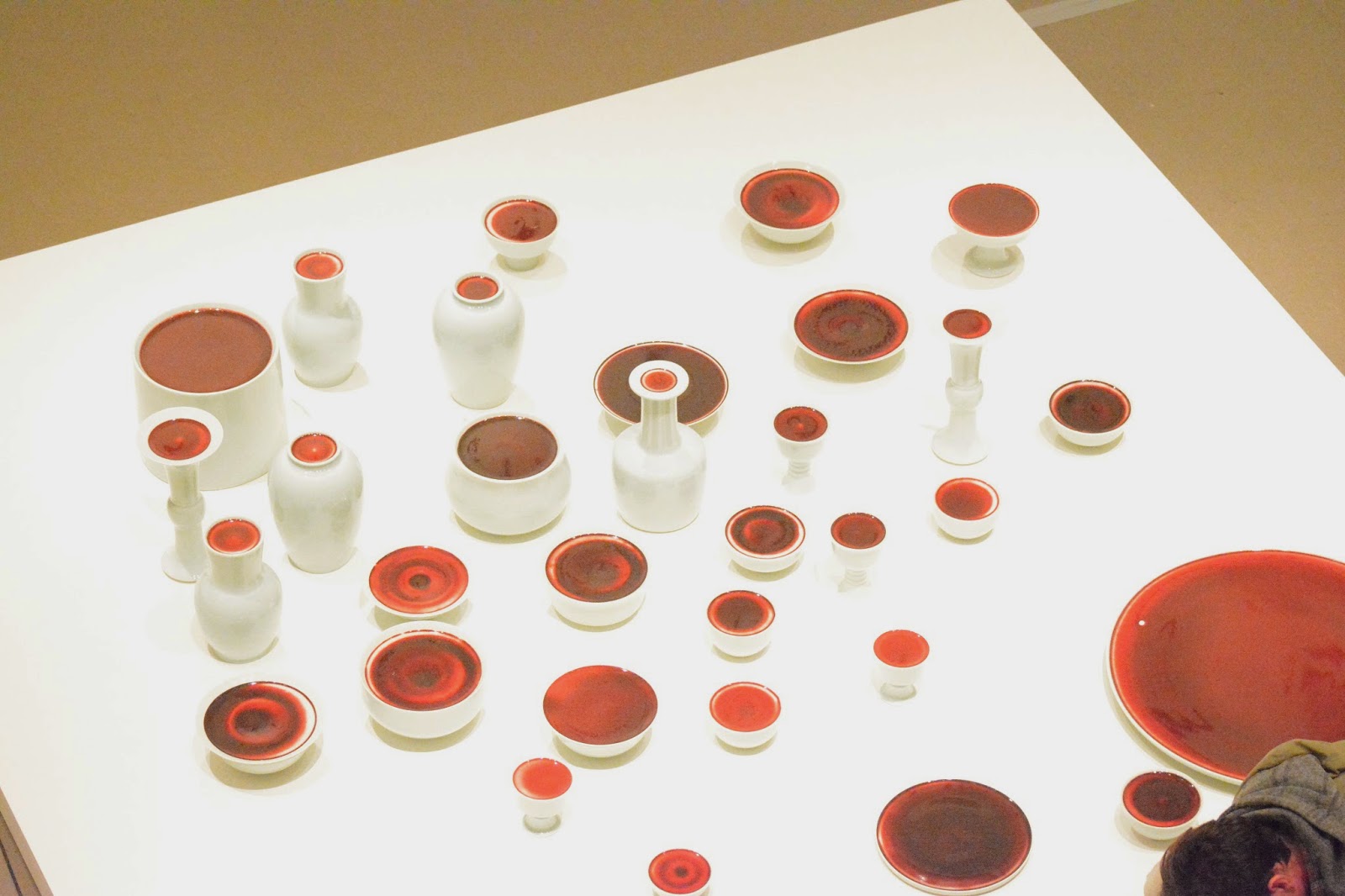 These last two shots were taken along English Bay two days ago.  This one just missed the mark, but I include it because it triggers some thoughts for future photos.  Two geese were flying by in the distance.  Behind them were some tall trees, and behind the trees, some high-rises.  I think there are a couple of orangey balconies at the top left, and I haven't figured out what the bright orange is in the bottom right corner. 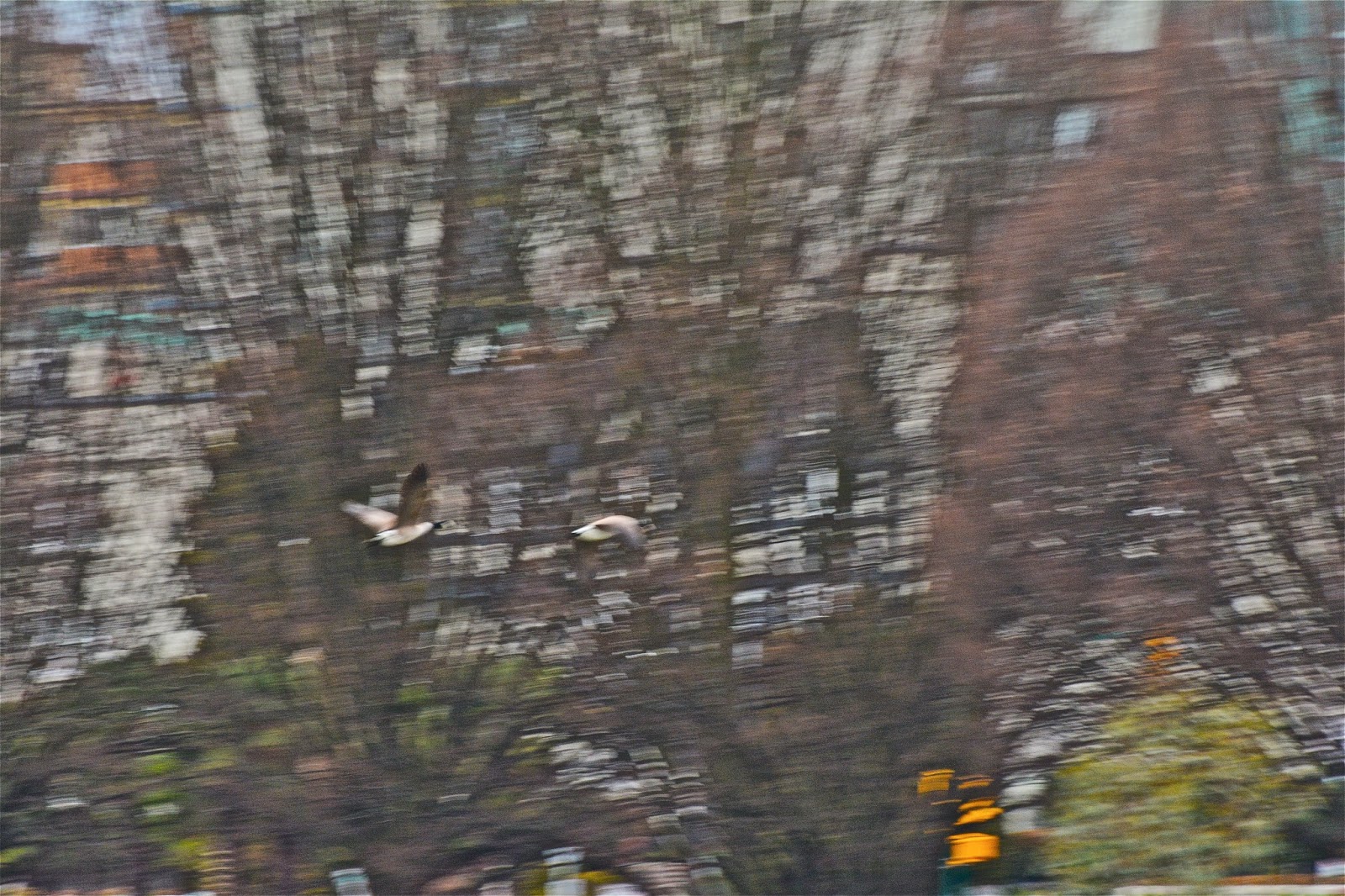 This trio of exercisers and the bicycle with orange rims was just one of many scenes to catch my eye.  There's more I'd like to share about this outing, but that will have to wait for another day.  (To the gentleman working out near the log, if you see this, your photos should appear in a day or two.) Have a happy Sunday, everyone! 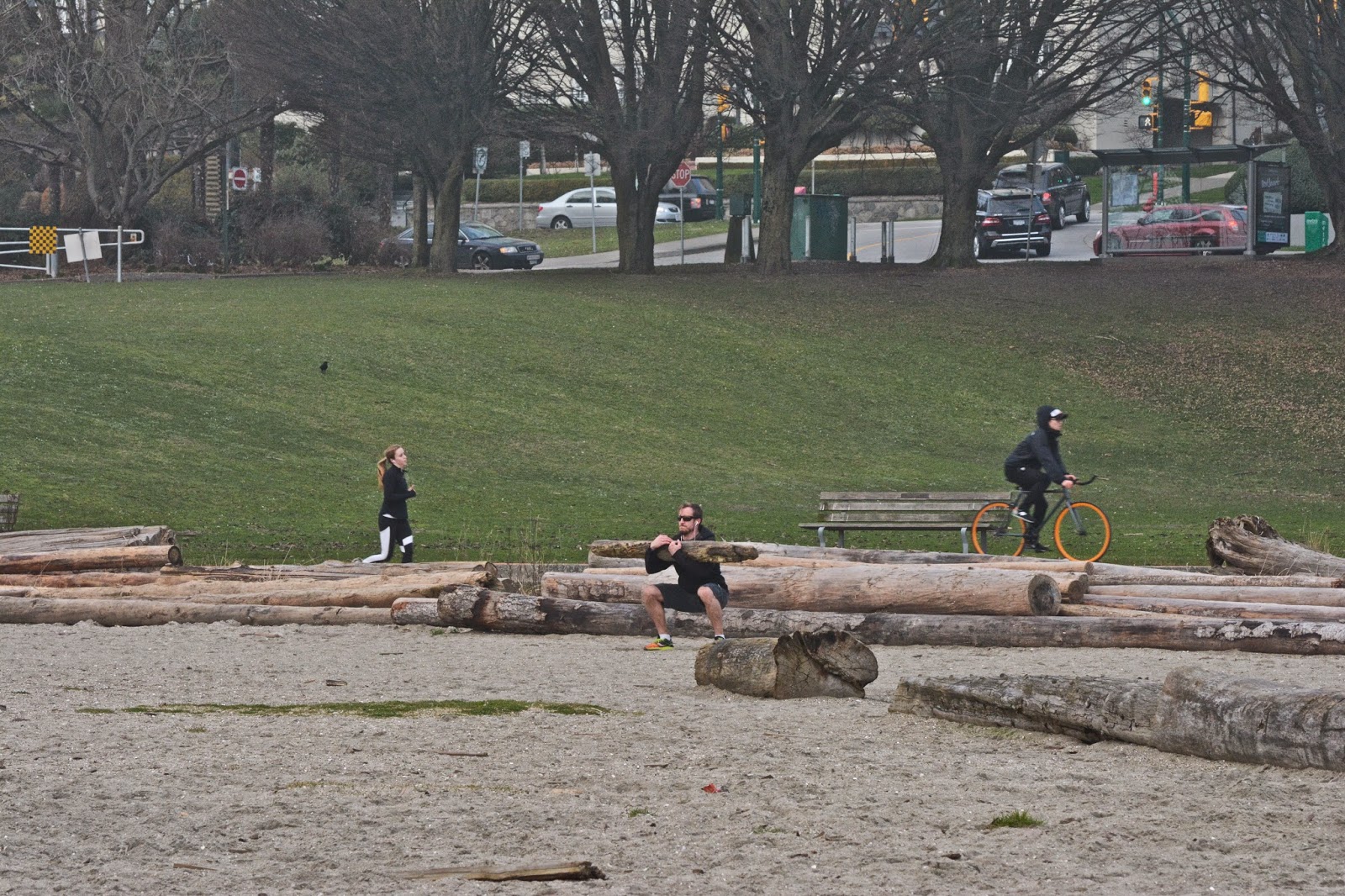