Lighting up Gold to raise awareness for Kids Fighting Cancer

The letter "L" is featured this week for ABC Wednesday. Thank you to Roger Green, Reader Wil, Leslie, Melody and Trubes for Leading by example to encourage bloggers to find alphabet-related themes each week.  Thank you also to Denise Nesbitt for Launching this meme that flourishes into its 9th year!

A week ago Saturday, Bill and I attended a BC Gold Ribbon event to raise awareness for kids with cancer. "L" words come easily to mind to describe what we saw and felt. Light, Love, Life, Loss, Liberty and yes, even Laughter.

BC Place contributed by Lighting up gold. 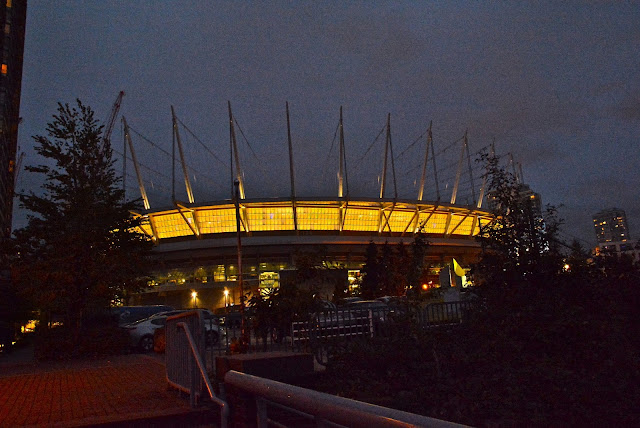 You might ask, "Why kids' cancer?  Aren't the challenges of treating cancer the same, regardless of age?"  Well, here are a few points I have begun to understand, some Learned at the site where I found the photo below:
1. Kids' cancers differ from those of adults.  They are not as clearly Linked to causes that we can correct with Lifestyle changes.
2. Treating kids with the same drugs we give adults (as we do now) has its Limitations.
3. Many "cured" kids suffer new cancers and/or new illnesses (not to mention emotional trauma!) years Later that were caused by the original treatments.
4. The financial and emotional hardship for parents of kids with cancer are astronomical.  One, and sometimes both parents, have to quit jobs and put all of their resources into finding help for their child.  Sometimes, even the family home has to be sold. Siblings of the child suffer as well.
5. An overlap exists in the cancers kids and adults suffer from, but allotting such a tiny percent of research funds to kids is Ludicrous. 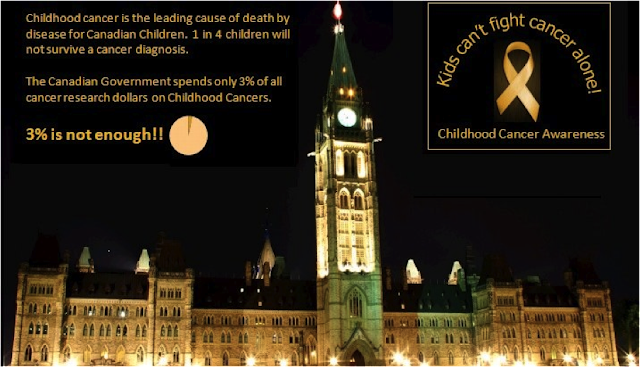 We were somewhat prepared emotionally after attending this event Last year (my thoughts at that time are expressed in this post), but the feelings, both sad and celebratory, came flooding back.  There were again speeches, the kind that stay in your mind Long after hearing them.  Our dear friend, Mary Putt, spoke.. 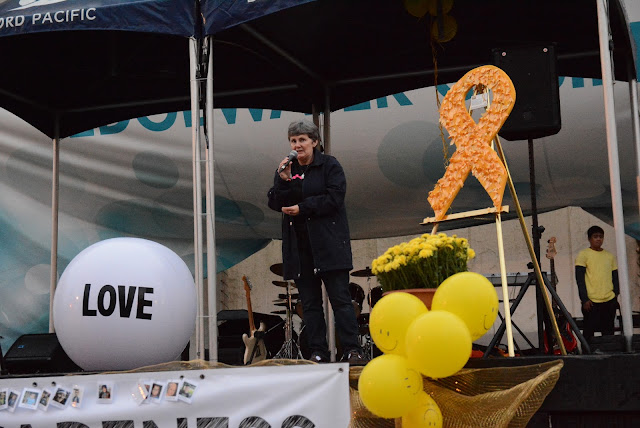 about her beautiful granddaughter, Lilee-Jean.  She was diagnosed with a brain tumor at 10 months of age, and passed away at the age of two and a half, after working her way into the hearts of thousands (no exaggeration) with her joie de vivre and her determination to dance in the rain. LJ's mother's blog and her father's blog are must-reads for anyone wanting to understand the roller-coaster ride all parents go through when faced with their child's cancer diagnosis. The picture of her below was taken at the picnic organized by her parents so the people who had followed her story via the blog could meet her.  This was just a couple of months before she died.  She was delighted to play in the fountain water, having had very few such opportunities in her short life. 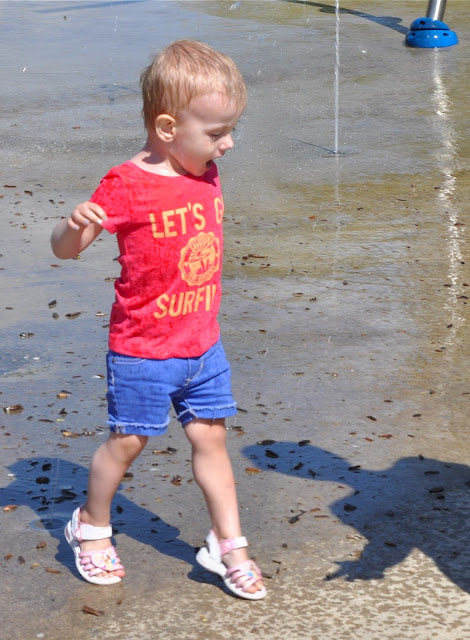 The extraordinarily beautiful dance in the video below was dedicated to Lilee-Jean's memory.  It was choreographed by high school dance students, at least some of whom knew her.  "I Was Here" speaks, I believe, for the feelings of all parents who have Lost a child.  It is terrible beyond all measure to experience such a Loss, but as the rest of the world goes on Living Life, and as their child's name comes up Less and Less in conversation, the unbearable fear that memories of their beautiful child's impact have faded, doubles the pain.
There was a lot of music at the BC Place awareness event. The songs were inspired and performed by teens who know, in one way or another, the devastation of a cancer diagnosis, but that isn't what the performers want the world to notice first about them.  They have already spent too much time battling disease.  They don't want to be better behaved or more talented or more heroic than "regular" kids and they do not want sympathy. They just want to Live their Life forming friendships, doing crazy things, growing up, having fun, falling in Love..  the normal stuff of adolescence.  Danielle Hoult, on the right, has had starring roles in musicals.  Amid giggles of shyness, she told us "cancer sucks" when she described a Little of her Life story.  Carmen Steinbach, on the Left, has written her own songs. 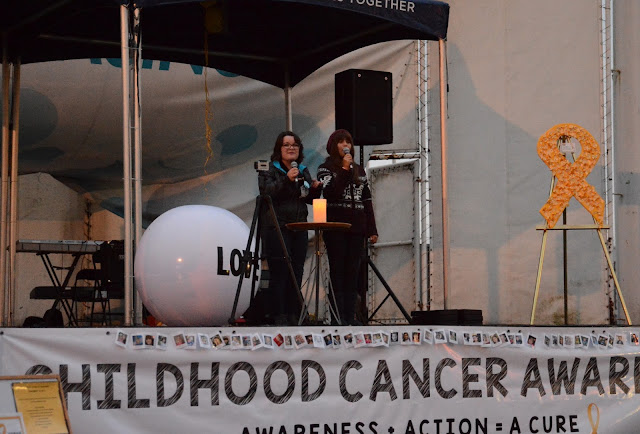 There was a Luminance about them and such joy that.. 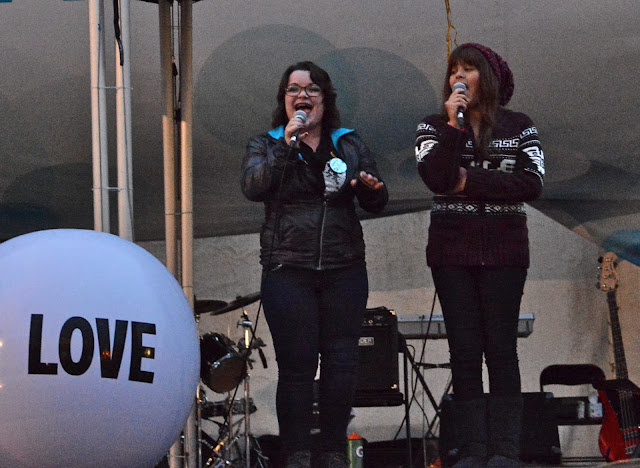 the misty-eyed Listeners could only respond with smiles and cheers. 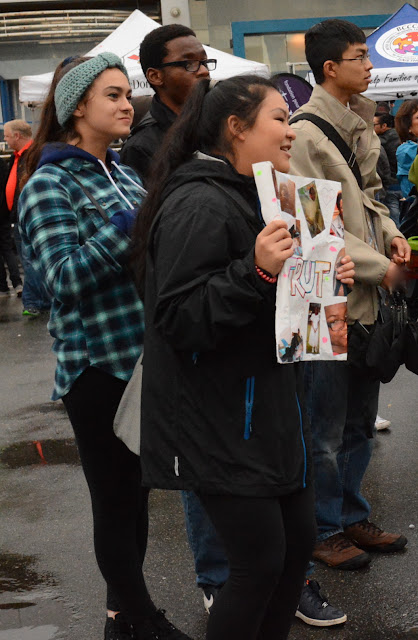 I don't know if these teens were siblings or friends or even survivors, but I can tell you that their lives have been impacted by cancer, no matter the relationship. 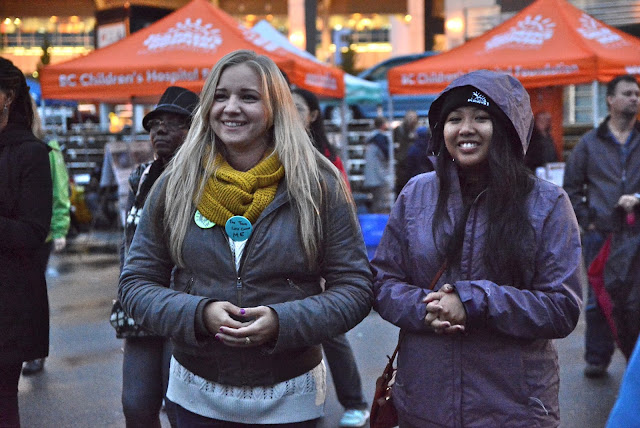 Carmen composed a song for Barbi, a dear friend met in hospital who died Long before her time.  The words that come to mind when I think of Carmen are probably ones she would hate:  brave, heroic, talented, funny, beautiful..  well, perhaps she would agree with the last three :)  I have tried to add her video here but since that doesn't seem to work, will leave this link for now.


Bill read the stories of kids, some of whom have died, while others still fight and/or are in remission.  Each story represents months, or more Likely, years of struggle.  I imagined the Love and the pain as parents tried to fit the huge spirit of their child onto a tiny poster. 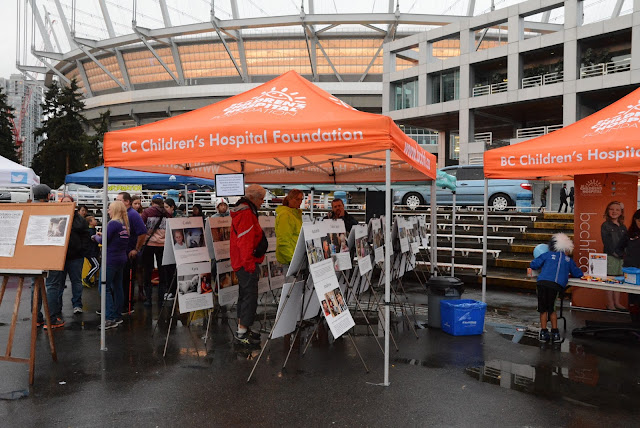 We checked out many of the booths.  Canuck Place, Ronald McDonald House, Make-a-Wish foundations, BC Children's Hospital are just a few Links for BC residents, but I'd say the ways to help are Limited only by your imagination.  Camp Good Times is one organization that I am just now Learning about.  It brightens the lives of kids and their families immeasurably.  Lasting friendships are formed, with bonds so strong, we could feel the energy radiating from the stage every time the kids gathered together.  I Learned recently that Jennifer, of Harrison Galleries (one of our favourite haunts) volunteers there for a couple of weeks each summer.  She had told me how she looks forward to that and how much fun she has at summer camp, but only recently did I make the connection to kids with cancer.  She hadn't mentioned the cancer.  The kids were her focus. 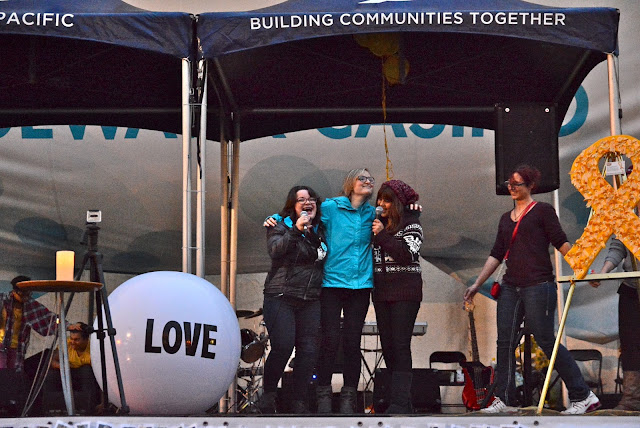 Aiden Chin, shown below, is this year's "Champion Child" for BC Children's Hospital.  You can read about him here.  He was in treatment for three and a half years, and now gives back by supporting other teens with cancer. 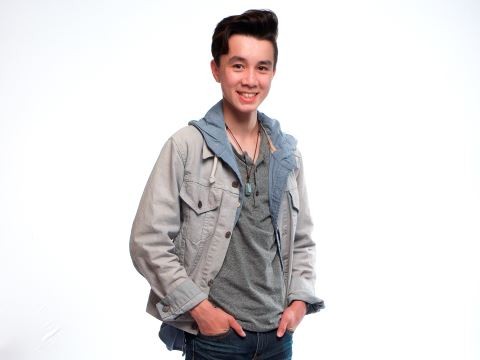 Below is Aiden's rightfully proud mom, Tina.  She was a whir of happy energy at the awareness event.  She ran up to us as soon as we arrived.. 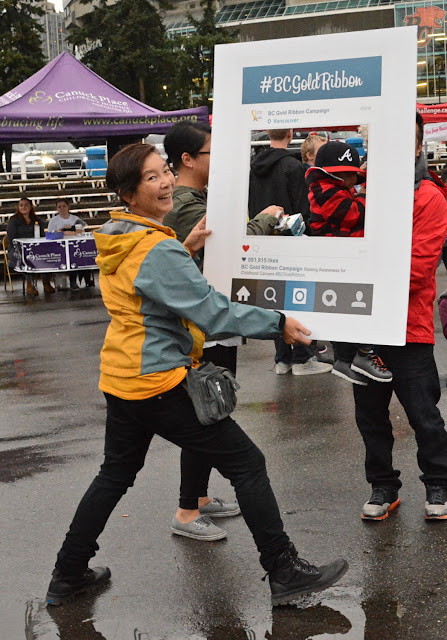 and held this "selfie" frame in front of our faces. 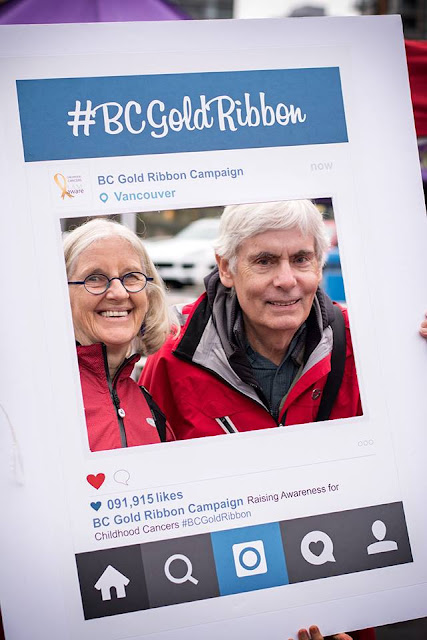 Up until then, my heart was beating a little too fast with the fear that strikes every time I witness suffering of any kind, and childhood illness has to be at the top of that list.  The moment we saw Tina, my heart settled down.  We were there, we were going to hear the stories, listen to the music, acknowledge the pain, do what little we could to help..  and yes, we were going to have fun!

Mary Putt introduced us to this young man.  I believe his name is Sean Thomas.  When he told his mom, at age 11, that he wanted to help sick kids, she gave him the phone number of the hospital and told him he would have to do that on his own.  Well, since 2009, he and a small group of friends have raised over.. 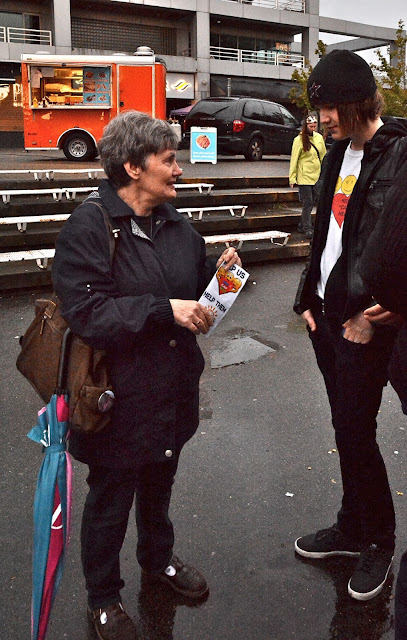 $80,000 through a program they organized themselves called Kids Can Help.  All of that has been contributed to BC Children's Hospital.  I must use that word "hero" again. I'm sure you are an ordinary, fun-loving kid, Sean, but you are also an incredible human being. My thanks to you and to the others on your team! 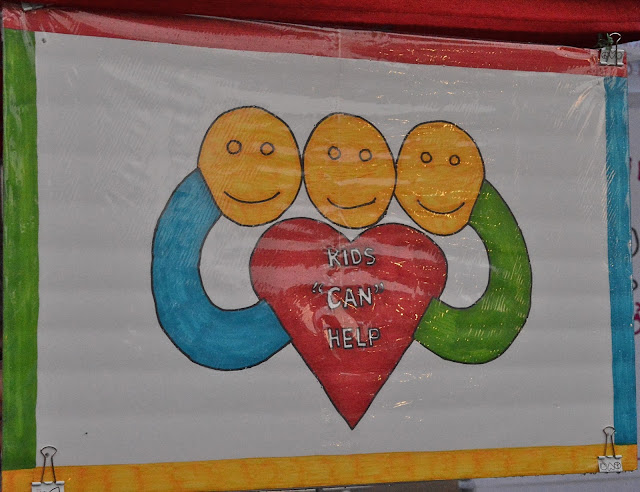 There are so many kids fighting Cancer that I don't know where to begin to raise awareness, but I will tell you about two that are especially in my heart right now.  Below, a mom describes the battle being waged for her son, Sean. Sean just turned seven.  Things are rough right now for him and his family.

Greta is another.  She has Ewings Sarcoma.  This picture was taken when she was five.  She is six now and has undergone many rounds of chemo.  In fact, as I write, she is in Calgary having crucial scans because the MRI machine in BC is being repaired. 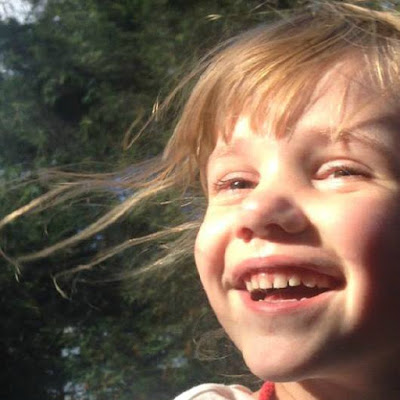 Her mother's facebook page is a must read in positive thinking,.  It brings home a message that I've noticed occurs over and over.  Kids are not interested in focusing on sadness, no matter how ill they are.  That strength of spirit seems to multiply the Love, the Laughter, and the celebration of small moments within the families and within the communities they Live.  As I listened to Brooke and Aiden read the names of BC children that lost their lives to cancer.. 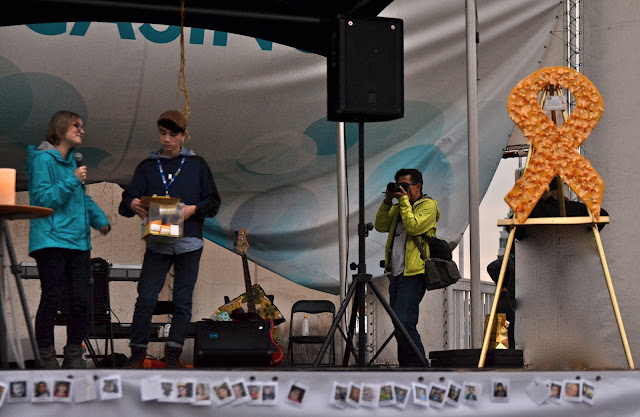 these birds flew overhead.  They were so high in the sky, I wasn't sure if they were geese or cormorants (I'm thinking the Latter). 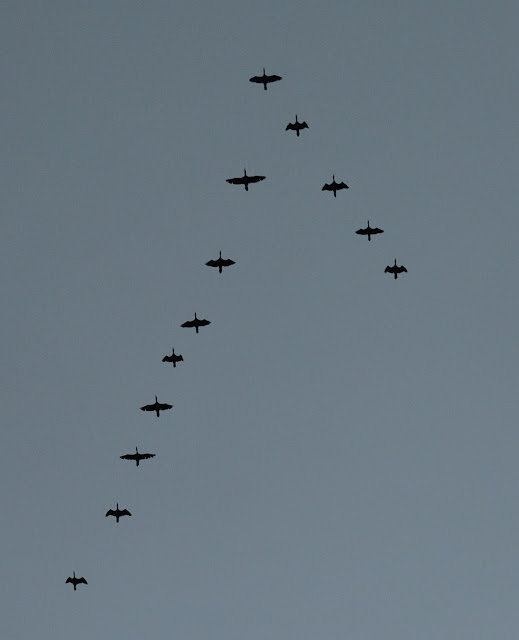 They suddenly changed direction but their formation, as Mary Putt noticed, was Like a fly-past salute to our Cancer warriors. 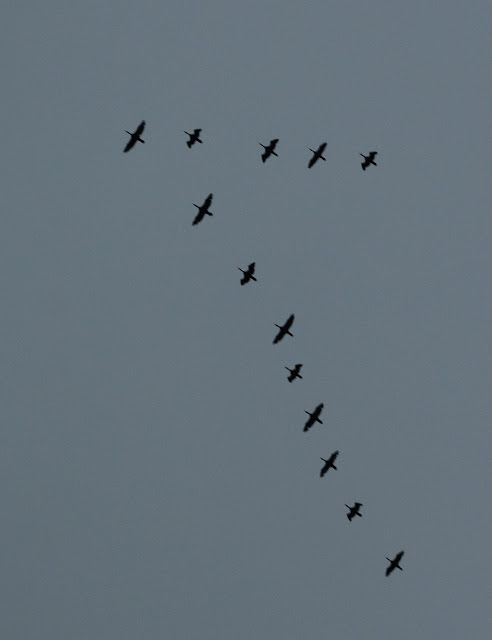 I've only mentioned a few stories.  There are so many more!  Every person on the stage below has an equally compelling one but there are almost certainly families in need of compassion in your own Localities.  Whether you check out the LInks here, or whether you take a moment to support your Local children's hospital, raising awareness is something we can all do in our own way.  No smile, no word of comfort, no gesture goes unappreciated. The kids will thank you with their smiles and their Love.  Becoming involved will enrich your Life.  As these kids on stage gathered for their final song, everyone felt the magic in the air.  There were cheers, laughter and raucous celebration.  As we headed home, the dominant thought in my mind was that I have to try to do more.  No matter how small the action, it is better than doing nothing.  That little decision had me walking on air. 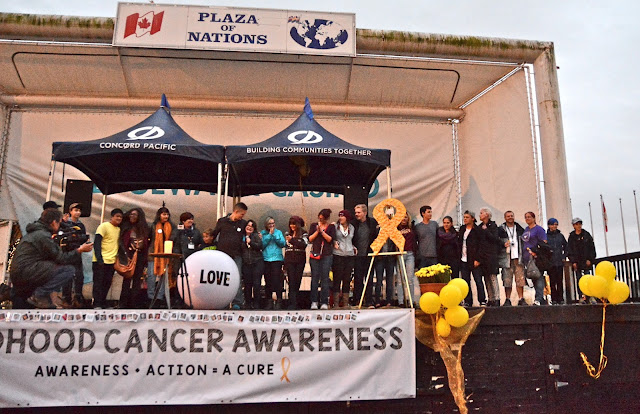 Science world was supposed to Light up gold along with BC Place.  Though we waited quite a while, that didn't happen, but there was gold around it for sure. 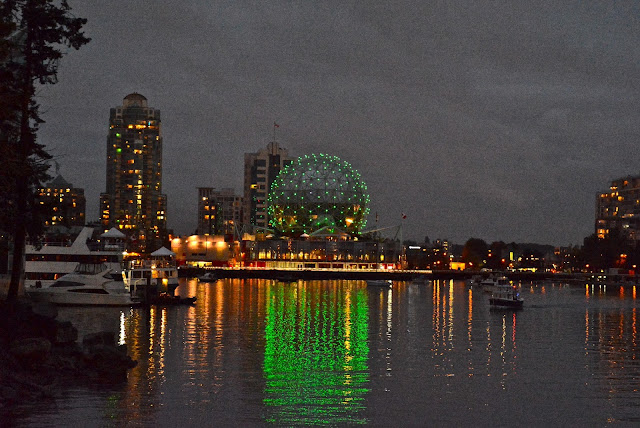 The Cambie Bridge looked golden to me as well. 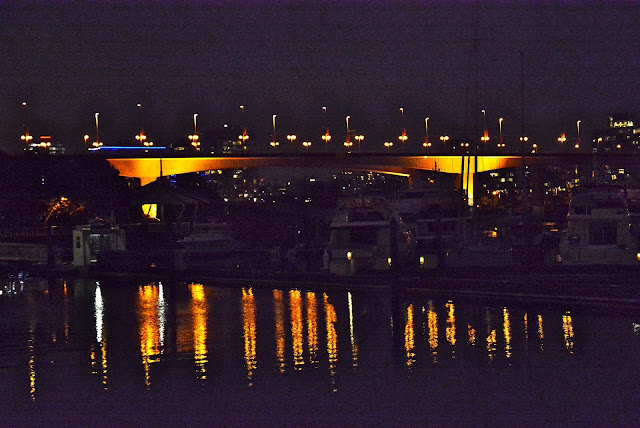 The following Saturday, we went to a movie and on the way home, stopped to see if Science World would finally turn gold. 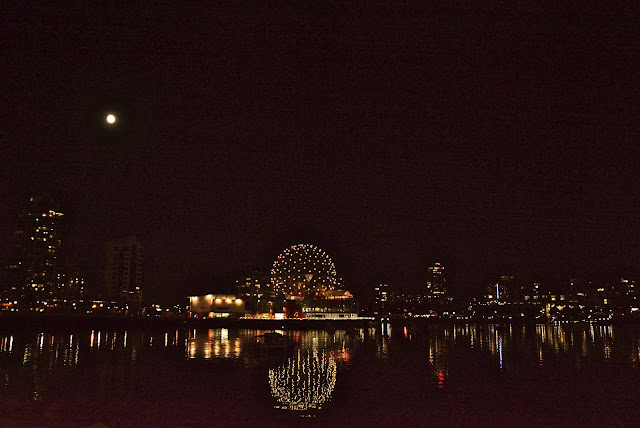 Yay.  The golden Light had arrived! 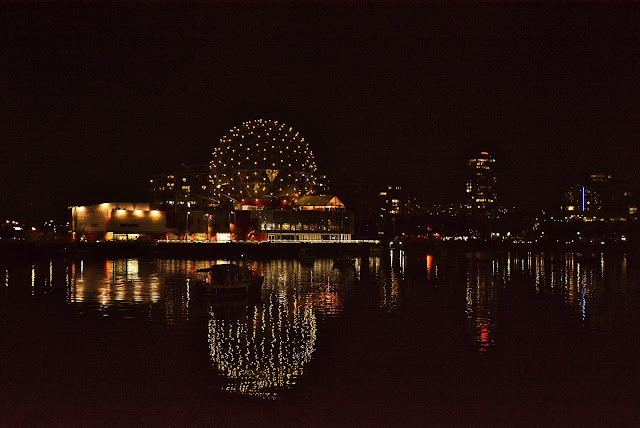 I found a song called "Kids" by Mikky Ekko that I really like.  With just a few Lyric changes (I've shown them in red), it seems to sum up my thoughts.  Carmen has told me she plans to Learn it.  No pressure at all, Carmen, but if you do find the time and energy to record yourself, I promise to share it with ABC Wednesday readers and facebook friends from around the world. Here's to more kids doing "what they want" in the future!   Thank you so much, everyone, for stopping by!

We know the words, we hope it’s enough, just enough
to be sure we’re heard.
Remember we're just kids.