I am feeling unorganized as I try to bring some semblance of order to the "U" words that come to mind this week.  I've added some pictures that feel only vaguely unified, so perhaps it is best to jump in with the commentary and see if a pattern or trend will emerge.

This is my little dog, Black Jack.  She is staring lovingly at Bill, who has just arrived back after a few days away.  She and Bill often "sing" in unison.  They understand each other perfectly. 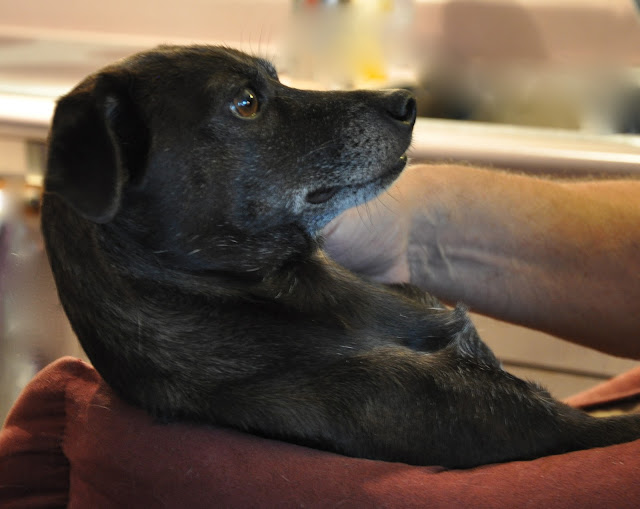 Their unique bond stems from Bill's unusual ability to empathize.  He  understands life from Black Jack's perspective, and follows through by treating her exactly as he feels she wants. 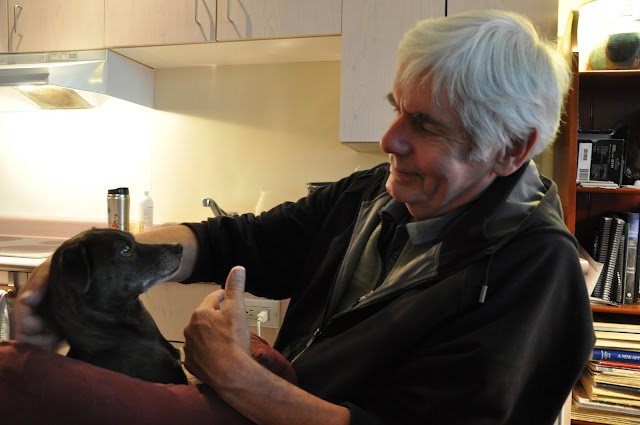 Unlike many dogs, Black Jack loves every part of her body handled.  Toe massages are fine, and ears are good too.  They look a little bit unconventional straight up, but that's just fine with her. 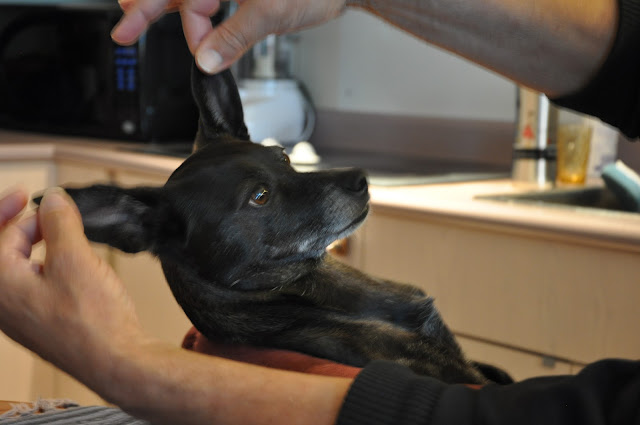 Here are Bill and Black Jack again, this time in North Vancouver, during our visit this past Saturday.  Black Jack's eyes are open at first, 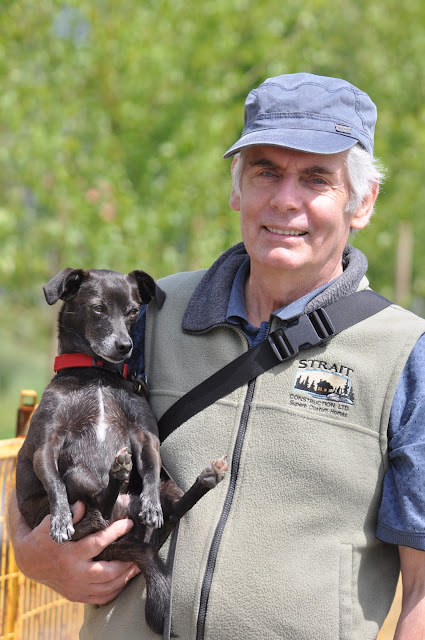 but they become heavy as she relaxes in the ultimate easy chair. 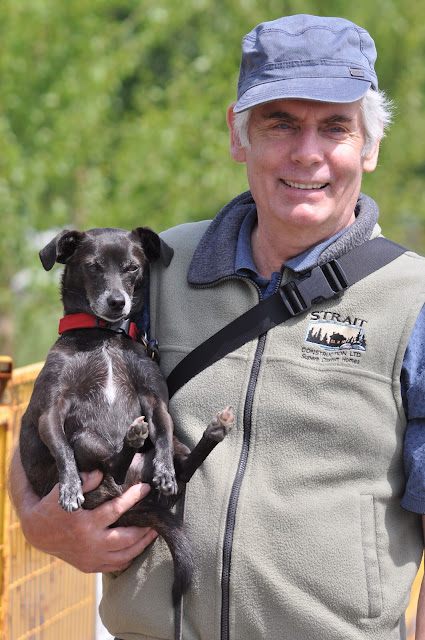 This ability to understand is one that makes the world work better for everyone.  It has been necessary during a recent standoff by the Musqueam Indian Band.  Demonstrations have caused delays during morning rush hour, as people tried to make their way over the Arthur Laing Bridge. 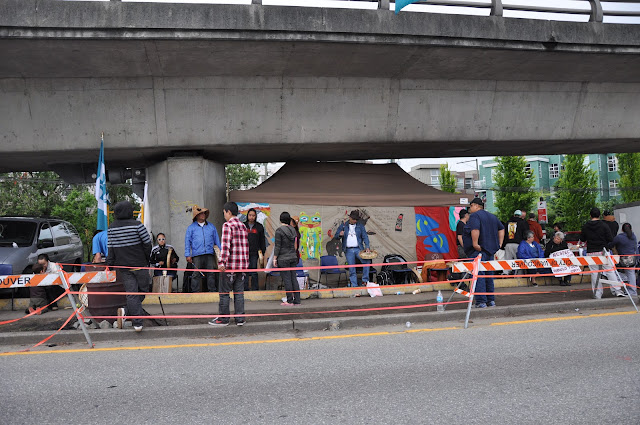 However, the reasons for these inconvenient delays go very deep.  This property, now privately owned by a a couple hoping to build a condominium, was known to be once occupied by the Musqueam and was declared a Canadian Heritage Site in the 1930's.  The recent discovery of the intact remains of two infants and an adult on the property calls for a new plan that respects Musqueam ancestors. 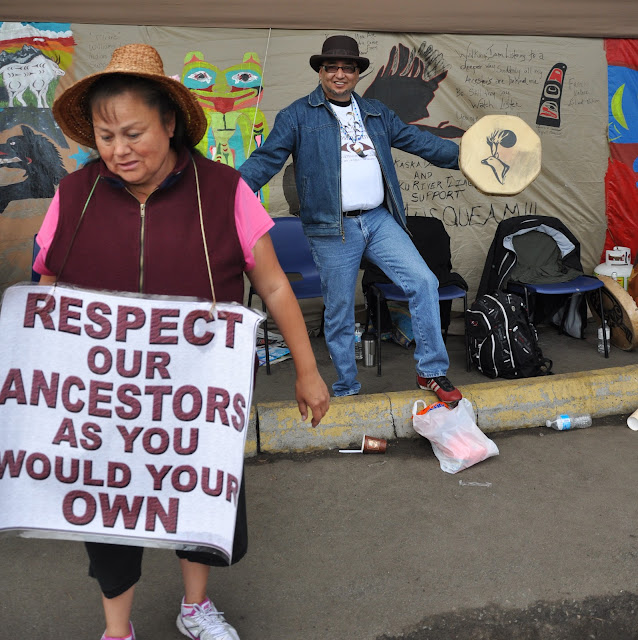 Bill and I were on our way to the Metro Theatre to see a play when we came across the demonstrators.  I stopped to watch them and to listen to a song that touched a core of understanding in a way that the spoken word may not have been able to do.  At first in unison, and then with a unique harmony added, the beauty of their tone and the fervency of their emotion seemed to reach the depths of my musical heart. 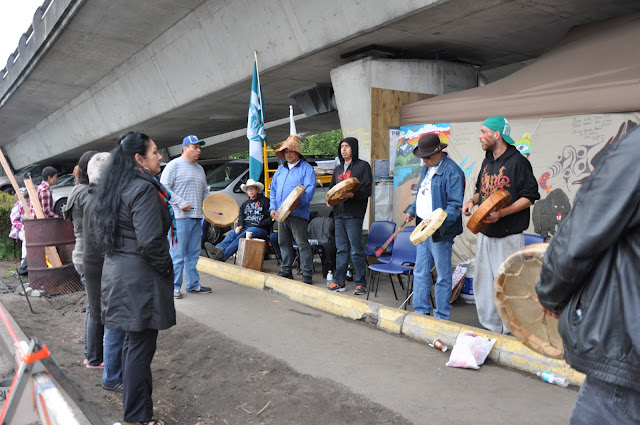 There were a range of ages represented in the singers, 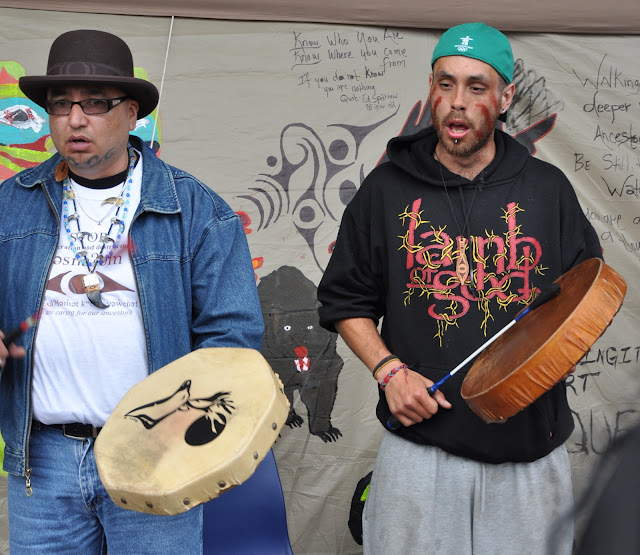 and I smiled to see that the ubiquitous Iphone found its place alongside musical instruments. 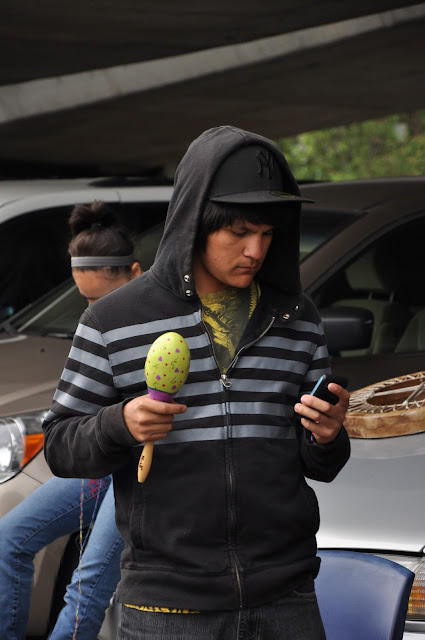 Whatever the age and experience of the demonstrators, it was clear they were united in their desire to make their point peacefully but with unmistakable intention.  I hope they and the government will be able to come to a solution that shows respect and fairness to all concerned. 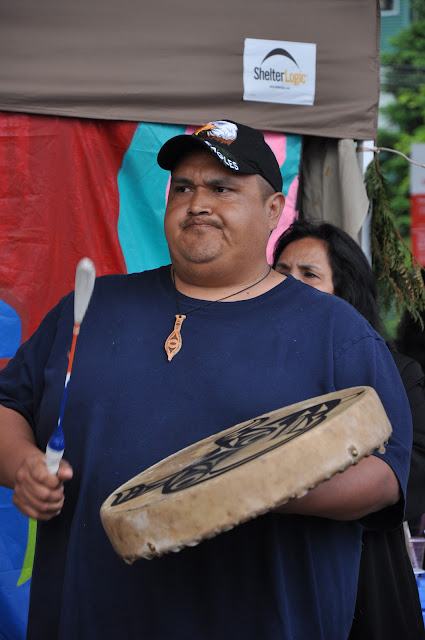 The play Bill and I saw that evening was One Flew Over the Cuckoo's Nest at the Havana Theatre. This picture is taken from the movie with Jack Nickolson as McMurphy and William Sampson as Chief Bromden.  Bill commented later on the stereotyping that often comes with native roles.  Somehow, our thoughts about that seemed to take us back to the Musqueam people.  Perhaps, our understanding had changed ever so slightly by the union of these two events in one evening. 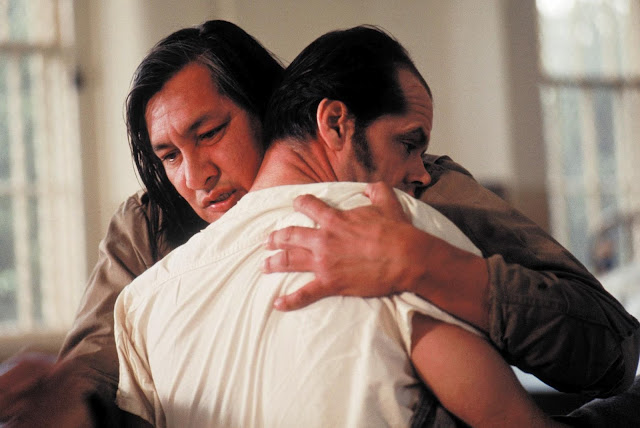 And, continuing along a theme of understanding, the photo below is one of Bill's hands holding a flower open so that I can photograph its beautiful centre.  Not something I asked him to do, but just the way he is. 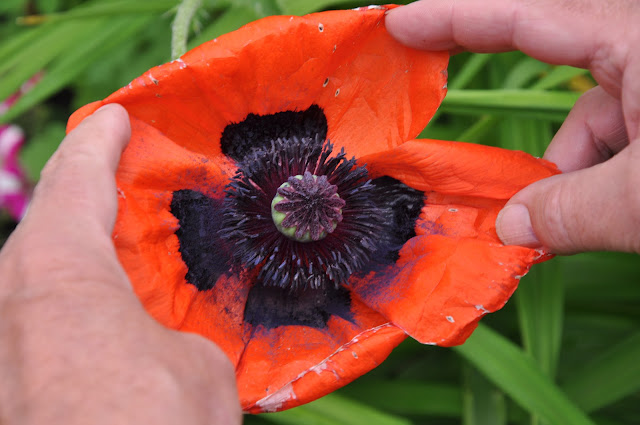 Here, I was trying to get the camera to focus on this thin flower, obscured by a busy background.  My camera was confused, so Bill put his hand by the flower to help the camera focus.  My favourite picture of the week. 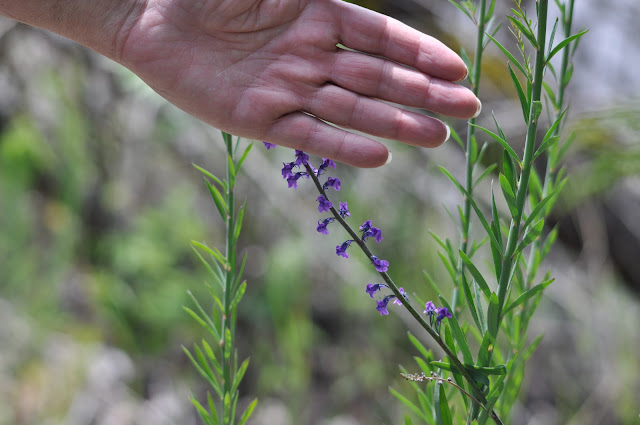 He immediately withdrew his hand, and here is the flower in all of its beauty. 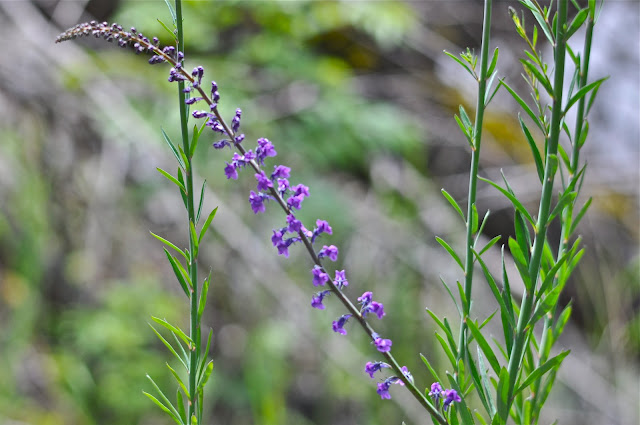 The photo below seemed perfect to represent the meaning of unique.  I don't think I've ever seen a dog quite like this one.  We learned that his name is Willy and that he is approximately 13 years old. 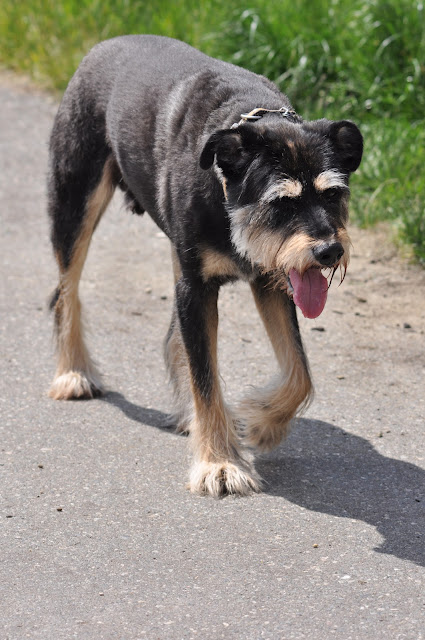 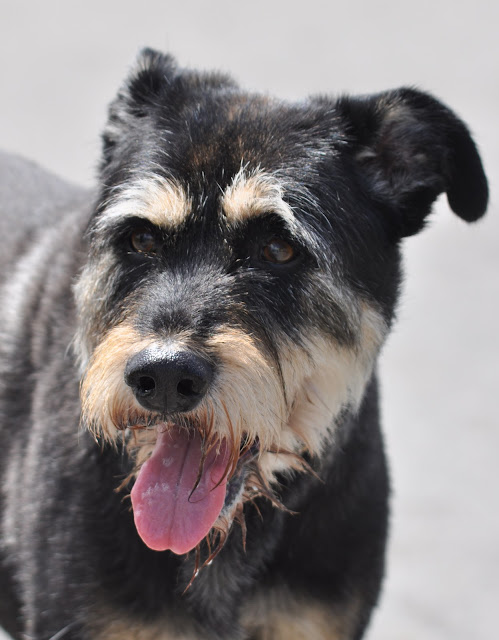 his most unique feature?  Definitely his feet! 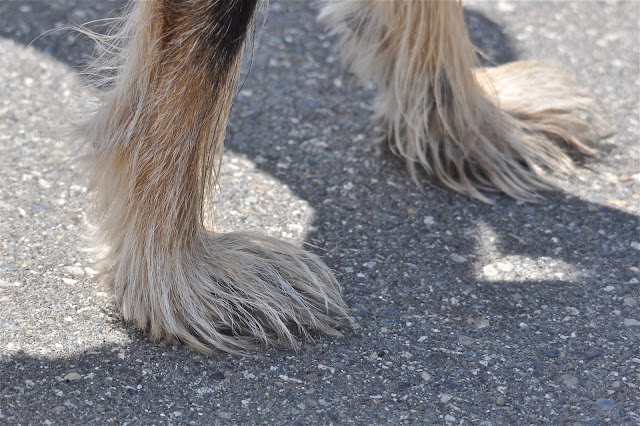 And finally, just a few "U" shapes to conclude the post.  They were much harder to find and perhaps more obscure than last week's "T" shapes, but here they are:

Thank you so much for taking time to read my "U" post.  For more fascinating thoughts about this letter, check out ABC Wednesday.
Posted by Black Jack's Carol at 1:54 PM