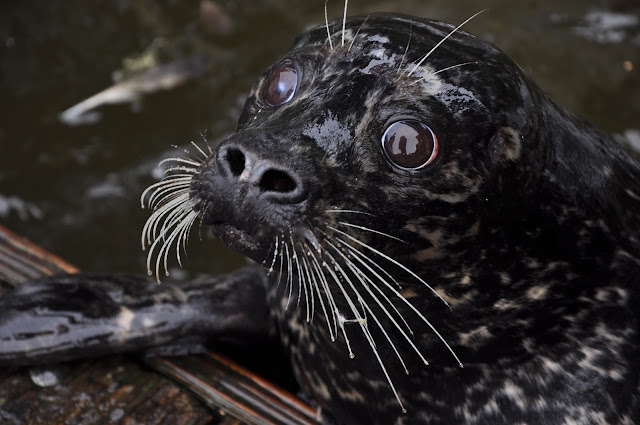 That seal did fit with the theme, since one of the first words to wend its way into my thoughts for this week's ABC Wednesday "W" post was wildlife.  Here are more examples of local wildlife spotted during the past week in Vancouver.  This Bald Eagle at Vanier Park was worried about a whirling (and very angry) crow that was overhead. 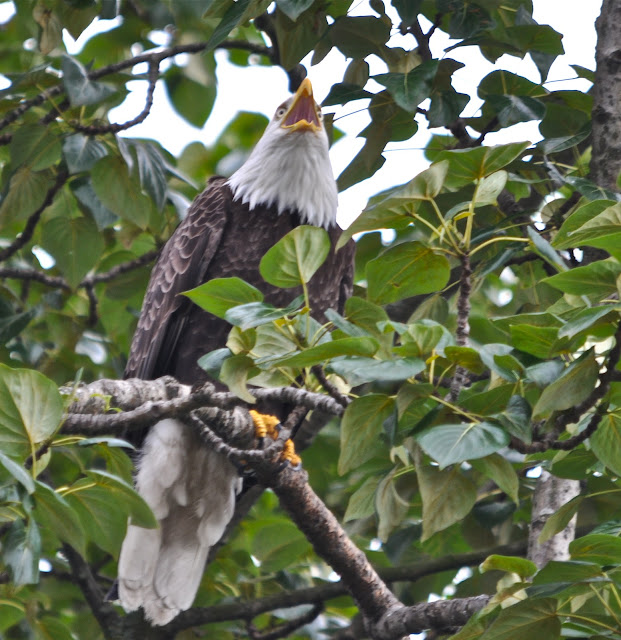 This juvenile eagle is the offspring of the above adult.  I caught a very poor photo here, but it does show that the young eagle is already branch-hopping quite confidently.  I had originally thought it would be at least until the end of the month before it fledges, but now wonder if that momentous event may happen sooner. 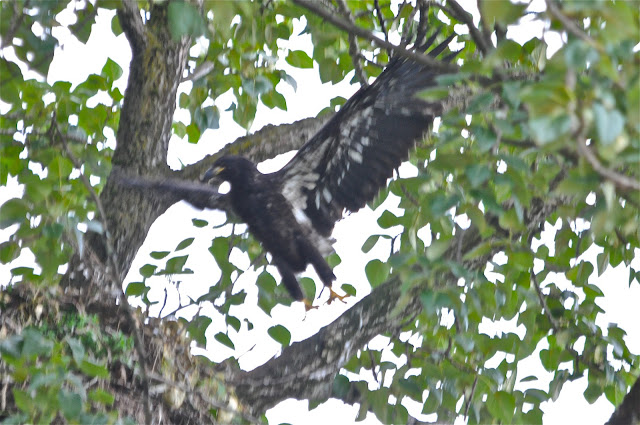 The light was poor when I attempted these shots, but a young photographer named Martin came by.  I don't know Martin very well, but was truly touched by his generosity as he worked hard to help me find the way to a better camera setting.  I thought this photograph was my best of the eagle that evening. 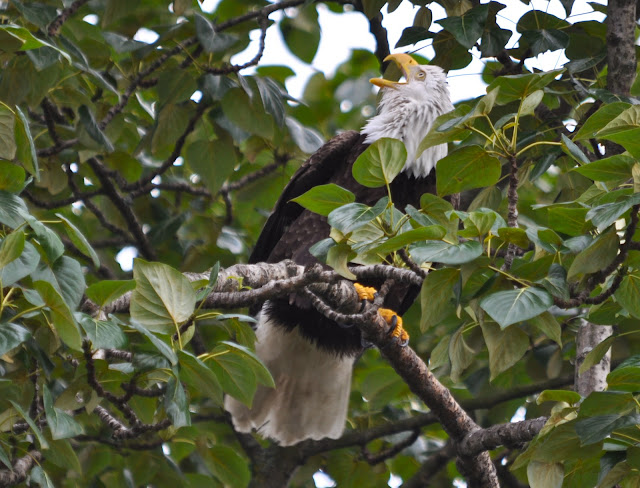 There are many examples of wildlife around Vancouver, some of them receiving more respect than others.  Starlings are very common, and many consider it a waste of their time to notice them.  However, I believe their colours are truly wonderful! 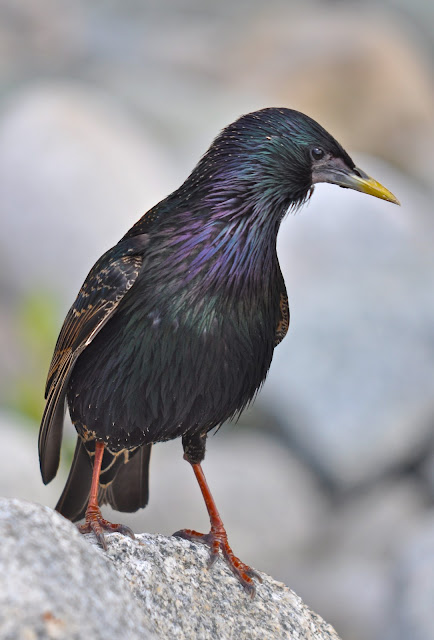 Black Jack, in her wisdom, pointed out this next example.  She stared and stared, and at first I was wary that she was a bit wacky.  However, she whined and insisted that I was underestimating her powers of observation.  I warn you in advance that you are about to see a rat, so if rats cause your stomach to go a wee bit weak, then you may want to give the next two photos a wide berth.  However, you will be missing a really cute little fellow.  As much as they are feared, the truth is that rats are just trying to get along and survive like the rest of us. 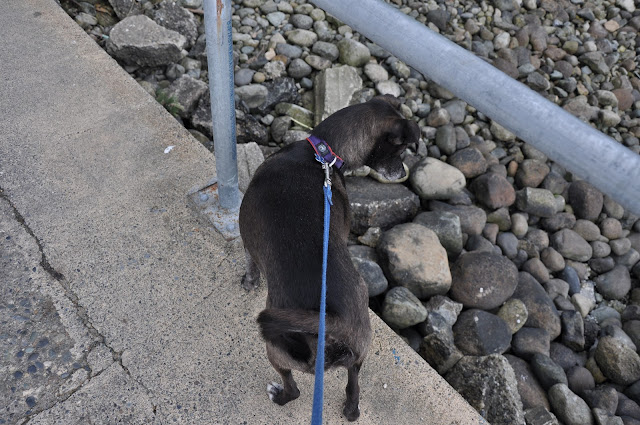 The rat was wary of my camera, and I gave a whoop of joy that I was quick enough.. 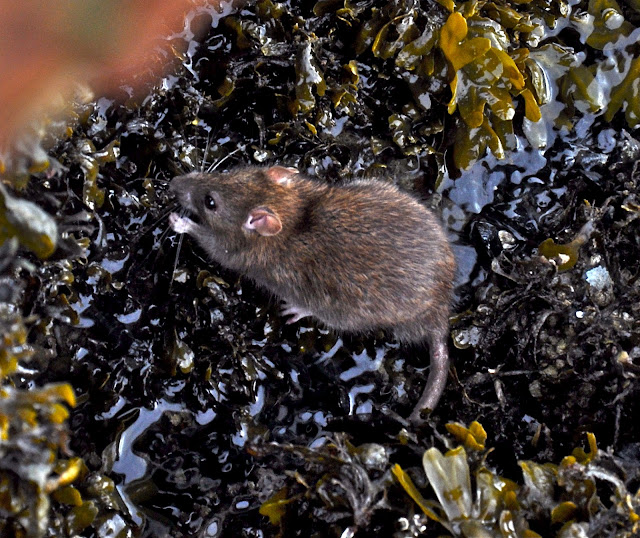 to get the shot.  Don't you think s/he is rather winsome? 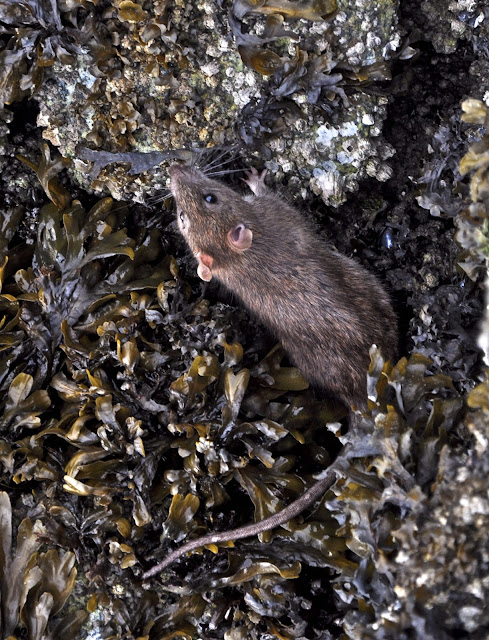 This next wildlife example is a White-crowned Sparrow.  What is notable to me is the red item in its mouth.  For some time, I couldn't decide what it was.. 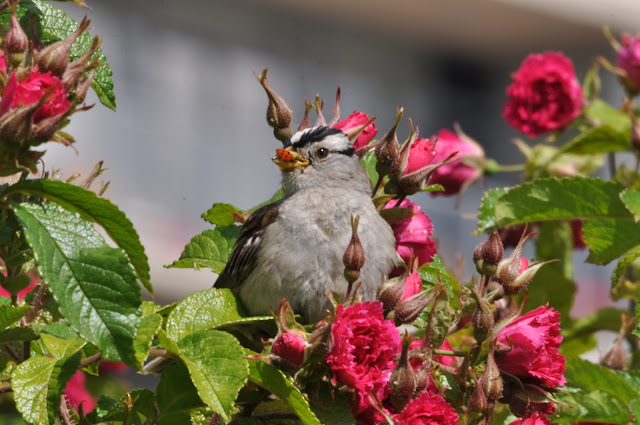 but a couple of days later, when I was watching a bee, and then noticed a ladybug on a neighbouring blossom, it suddenly occurred to me that the mystery item in the bird's mouth had been a ladybug.  I guess this is a time of year when they are quite widespread.  Poor little thing, but again, I remind myself that we all have to do our best to survive. 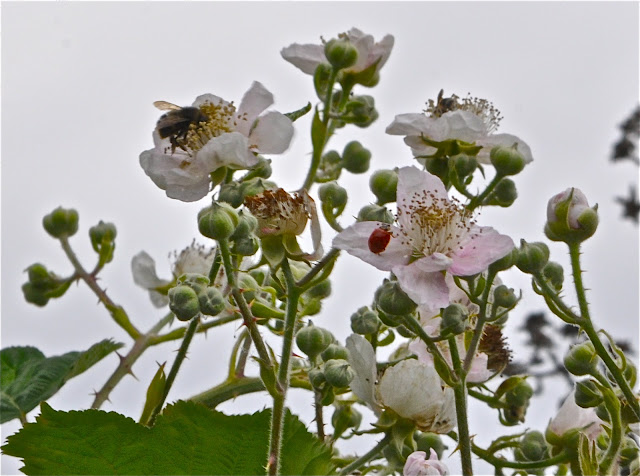 I witnessed the ladybug working upside down here, a winning feat, in my estimation. 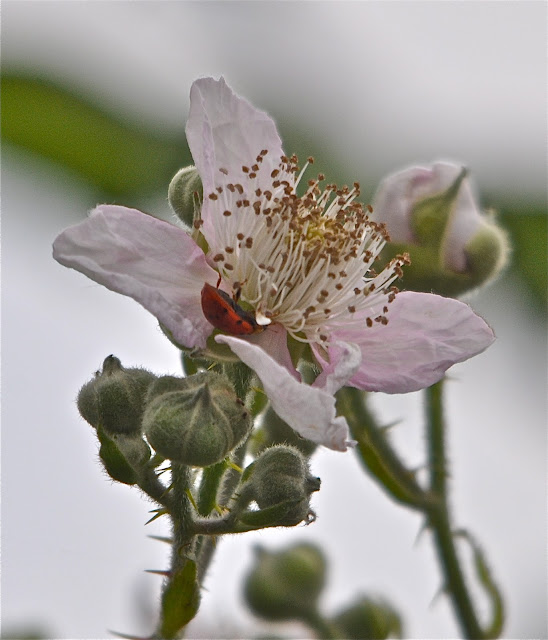 These next wildlife photos are of the plant variety.  Thinking "W" again, 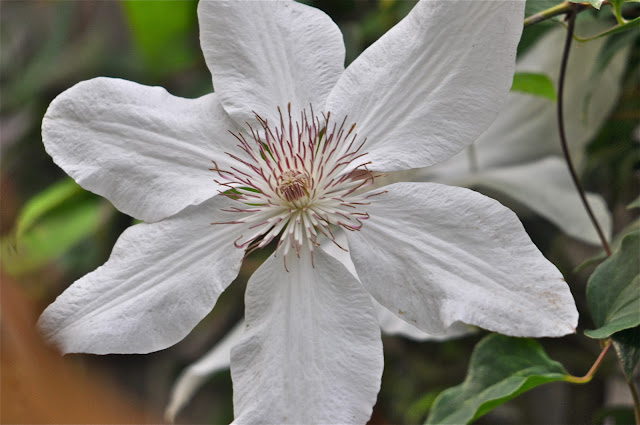 I decided to focus on.. 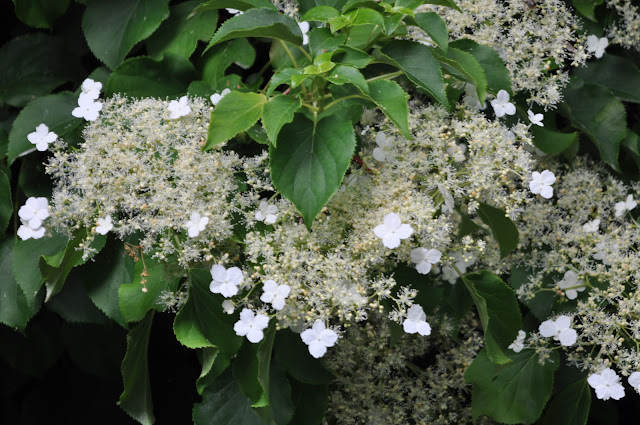 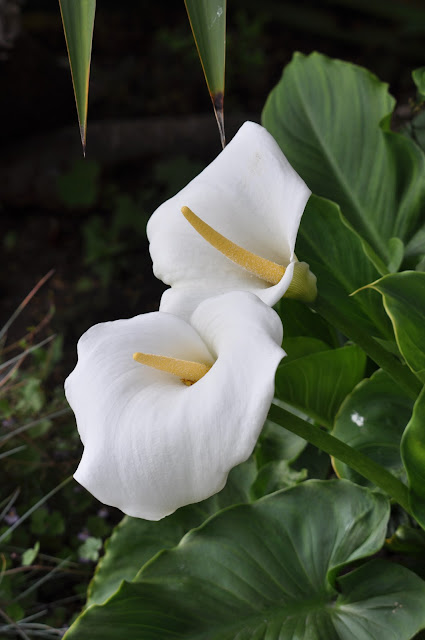 My second theme of the week has to do with a Welcoming World. 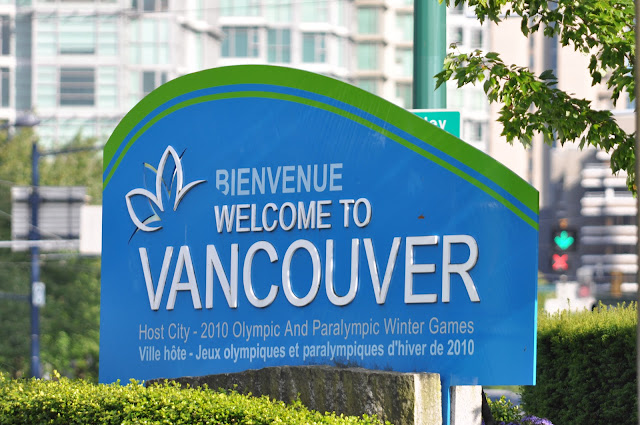 Guy's kindness in inviting me onto the dock at Granville Island (previous post) and Martin's efforts to help me with photography..
were just a couple of times last week when I felt happy to be welcomed to the worlds of relative strangers. 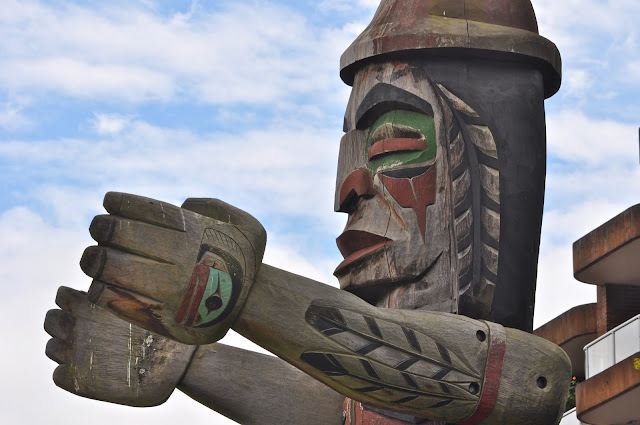 There was one other such experience that has stayed with me ever since it occurred last Saturday evening, and it leads me to another great "W" word - wheels.  Bill and I were walking along the seawall near my apartment when we spotted some whoppingly talented cyclists.  First, I took photos of.. 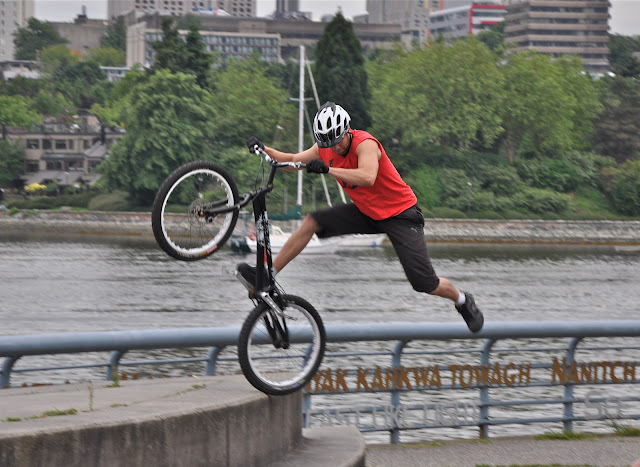 a couple of individuals.  That was fun, but there were five of them, and I wondered if they would consider doing one jump off the step, all at the same moment. 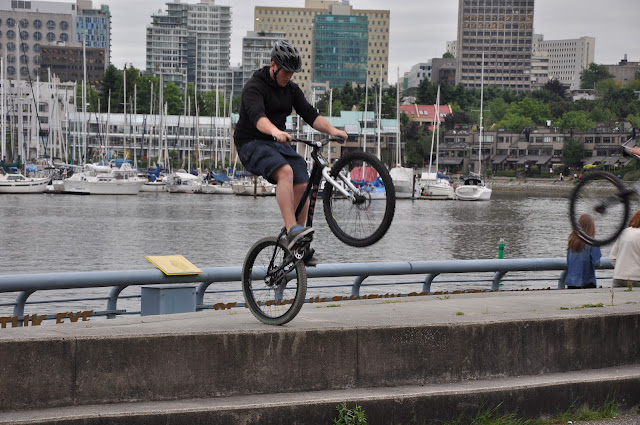 I was hesitant to ask them, but Bill has a warm way about him that I wagered would be successful.  He approached them with my request, and to my great delight, they barely thought for a second about granting my wish.  Thank you, guys!  That was once again a "welcome-to-a-stranger's world that gave me great pleasure. 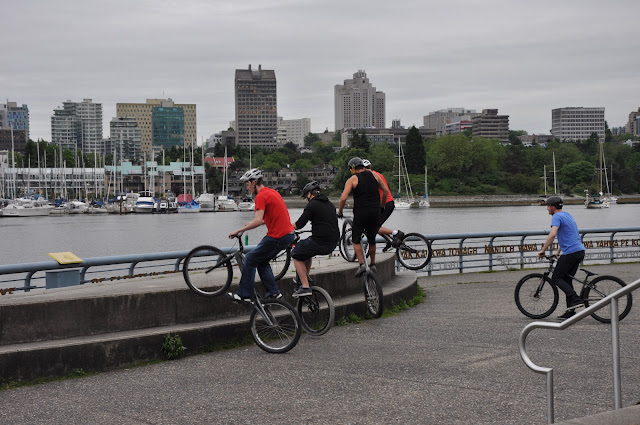 I worried just a little bit for the safety of the guy in blue.  His bike was smaller, and I had the feeling he was a wee bit less experienced than the others. 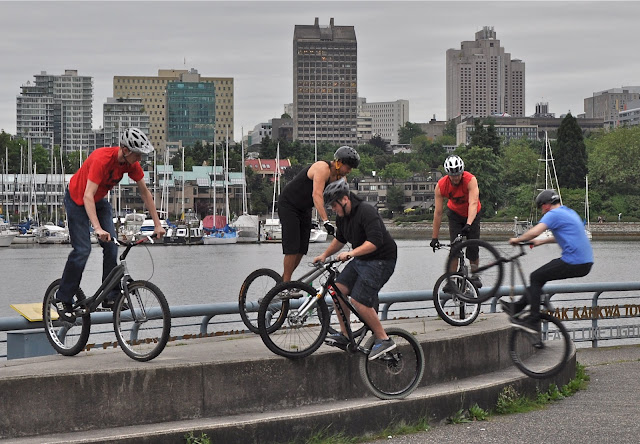 However, under their guidance, he found his place.  Below, you can see that all wheels were in the air.  Wow! 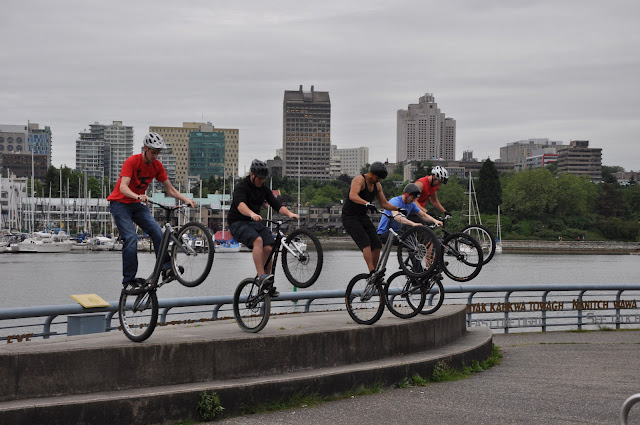 The guy in blue was the first to jump, 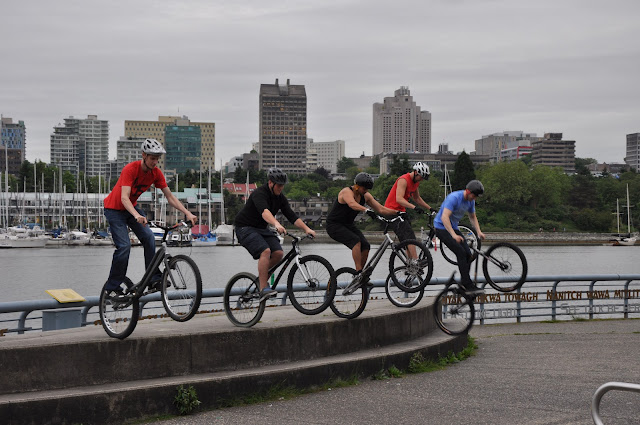 and I love the smile on his face here.  I think he had a sense of well-being as he realized he hadn't been wobbly at all. 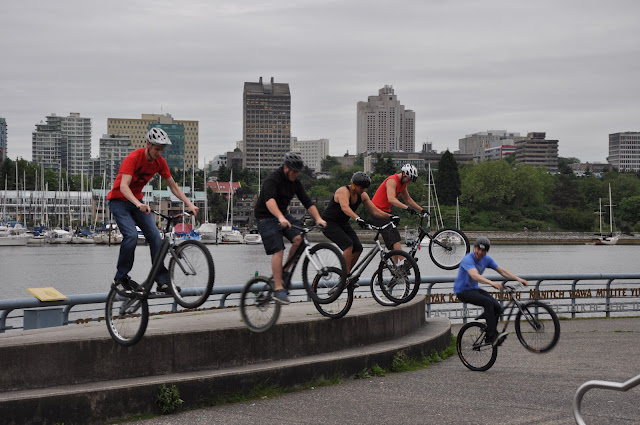 Thank you so much for stopping by.  What a weird and wonderful week it has been.  For other "W" posts from around the world, do take some time to check out the ABC Wednesday web site.
Posted by Black Jack's Carol at 1:34 PM