"A" Activities to bring an "Alive" Feeling

A new series of Alphabet-related posts began this week for ABC Wednesday.  I am a few days late, but would like to join in.  Many thanks to Denise Nesbitt for starting this meme seven and a half years ago, and to the volunteers who do a wonderful job of keeping it Alive.

I was a good way through this post when I realized I chose the same theme (Alive) for the letter "A" of the last round.  Too late to change, and perhaps significant that that word seems to crop up as a theme in my life.


Here are a few of the things this past week that inspired that "Alive" feeling:

1. The lesson
On Monday, I rode my bike to UBC for a piano lesson with Bogdan Dulu.  I left the lesson with a "lit up" feeling.  Such a luxury to have the time to Acquire new skills in something I Adore doing.  And, such an Advantage to have found the perfect teacher/Advisor who was also willing to take on a senior :)  "Excursions" by Samuel Barber is a new piece that I am just beginning.  It has sweet, lyrical passages and high-speed chases across the keyboard.  It is almost certainly too difficult for me, but the Attempt to learn it will keep my brain Active, Add fun to my day and Acquaint me with something brand new and beautiful that I would otherwise have missed.  You can listen to Nadia Reisenberg below in a 1947 (the year I was born.. how Amazing is internet!!) performance at Carnegie Hall.  Lots of "A" tempo markings: the first movement is Un poco Allegro, the second, In slow blues tempo, the third, Allegretto and the last, Allegro molto.

2. The Ride
The bike ride to UBC is my longest of the week and a challenge as well, but it is another Activity that makes me feel alive.  On the way home, I stopped at Trimble Park near Bill's former home.  The day was grey, and the clouds settled around the mountains like giant inner tubes (always the comparison that comes to my mind when I see them this way. 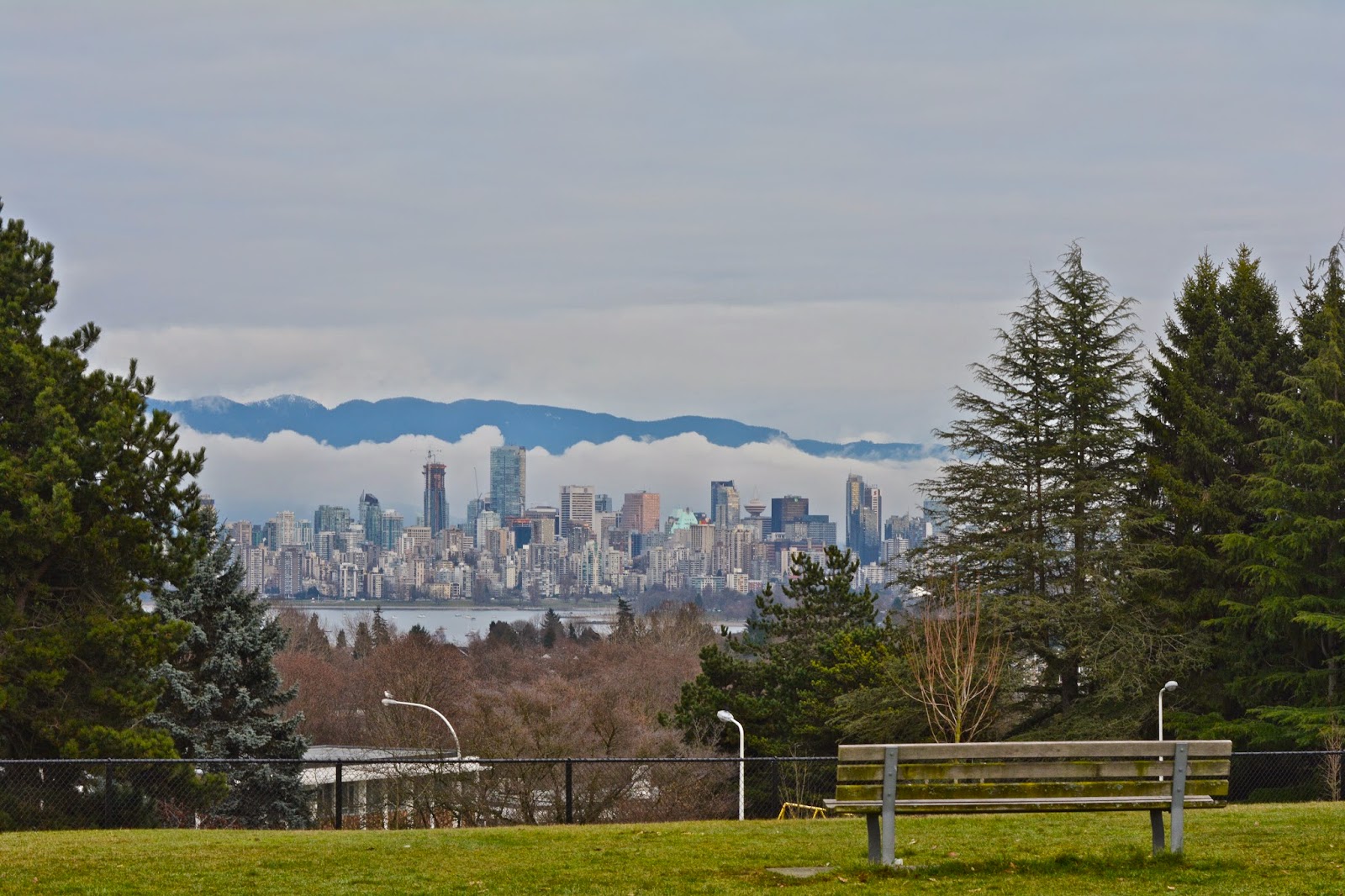 Two Adolescent eagles flew by, both very high in the sky.  I managed to catch a blurry shot of this one with my 300 mm lens.  We didn't visit the Jericho eagle Abode this year, but I'm guessing from this sighting that things went well.  Yay! 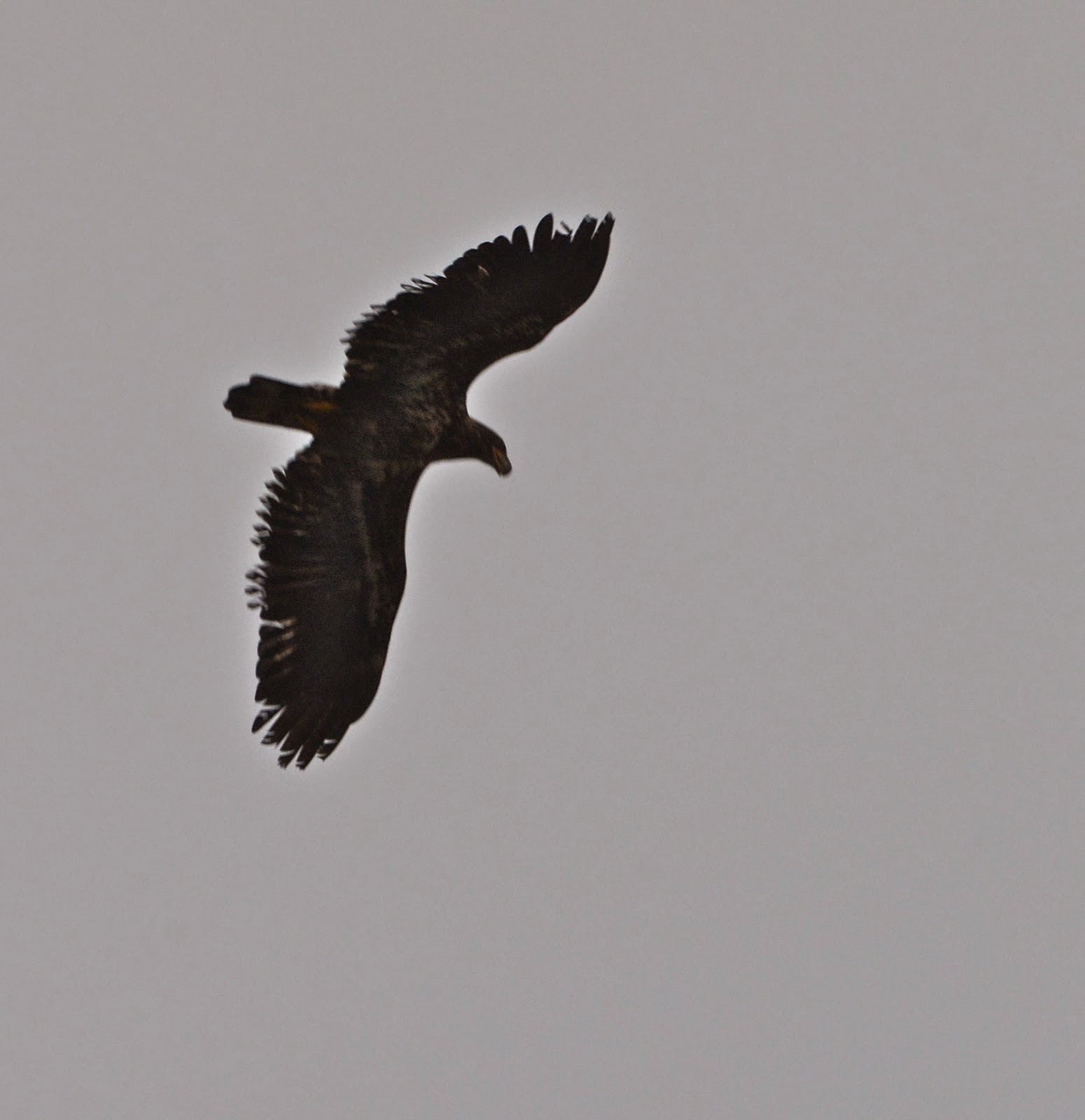 And a better look at the inner tubes :) 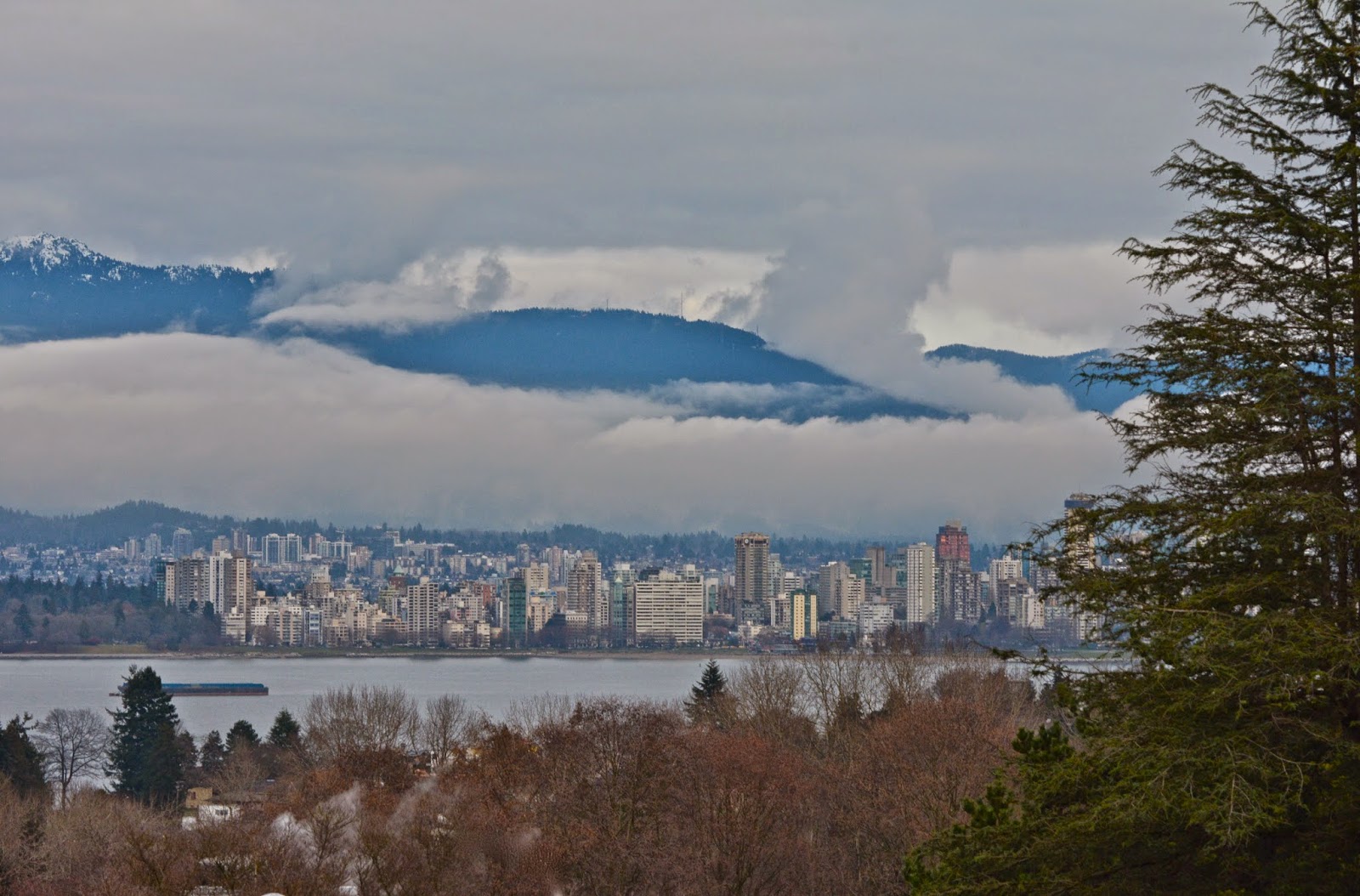 There's the hill that challenges me.  You are just seeing the top portion.  It Appears just after you have come over the crest from an Already long climb.  The best part of that hill is, I Admit, reassuring myself I can still do it, Albeit slowly and huffing and puffing all the way. 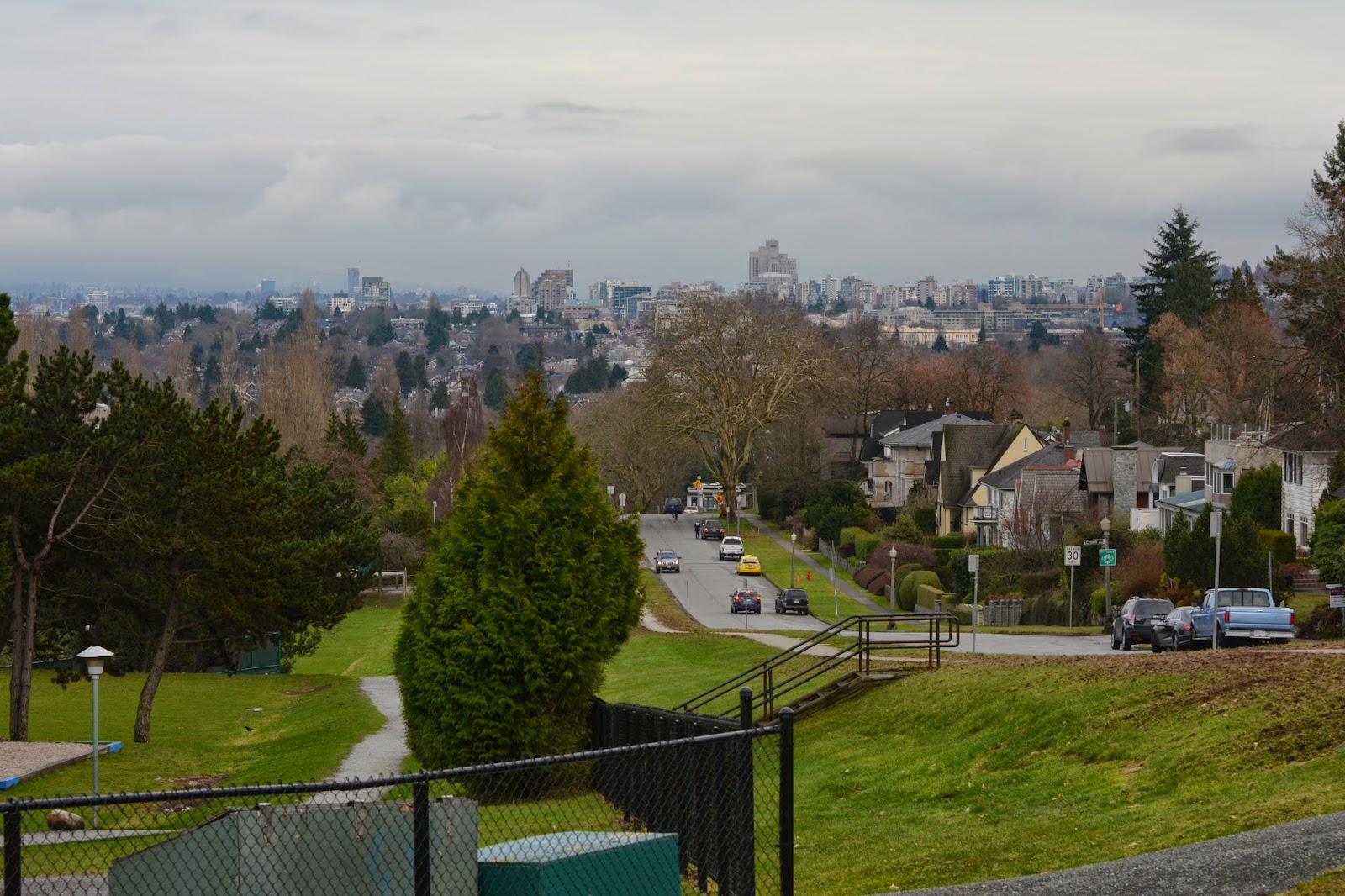 2. The concert
Bill and I went on Thursday evening to hear Bogdan in an "emerging Artist pre-concert" performance of a New Music Festival at The Orpheum.  He gave a short talk.. 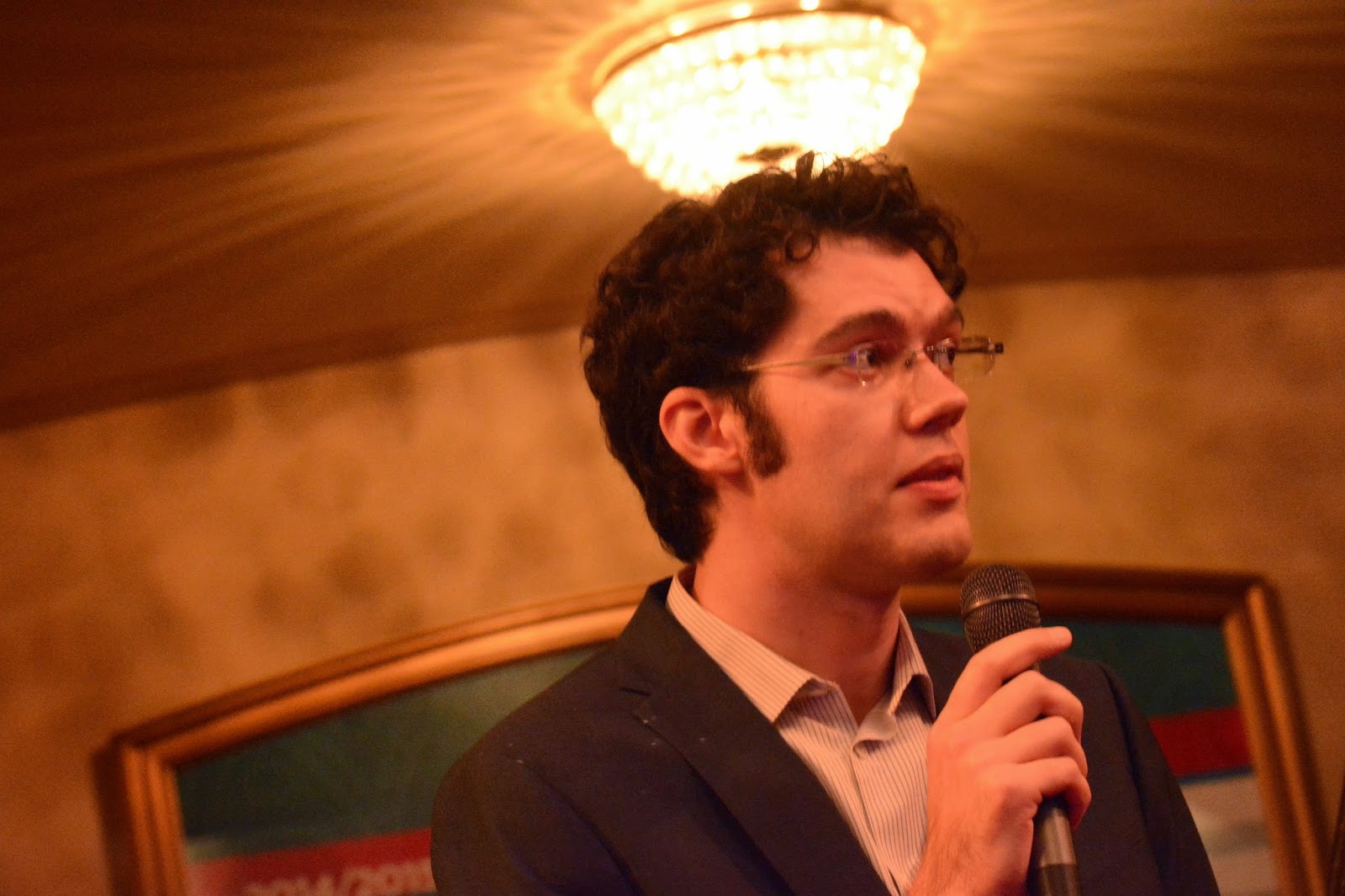 before Astounding the Audience with his technical and musical Acuity in the performance of three Astronomically difficult études by Marc-André Hamelin.  I don't think it is just because Bogdan is teaching me that I found his performance to be the most musically satisfying Aspect of the evening.  I Aspire to be as open to new music as I am to traditional music, but it seemed to me that some of the pieces repeated the same fragment over and over again.  They were wonderful fragments, rhythmically interesting and with lovely melodic motifs, but barring the Aim of putting the listener into a trance-like state (something can be said for this goal), I felt they lacked development.  Perhaps, I am Alone with that feeling.  All to say, "Thank you, Bogdan!" 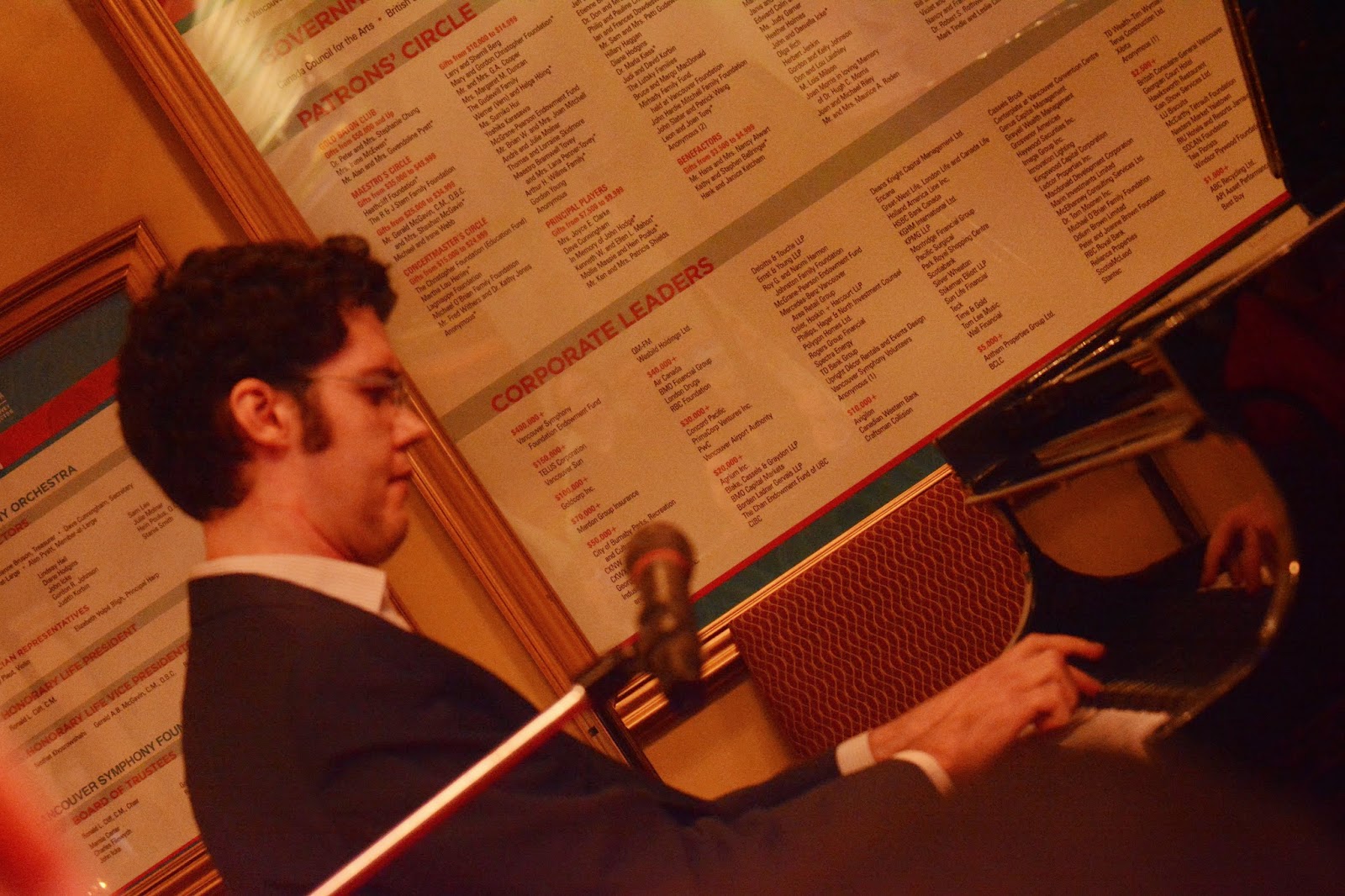 Bill and I walked in the Afternoon on Monday and encountered Dan doing BMX tricks under the Cambie Bridge. 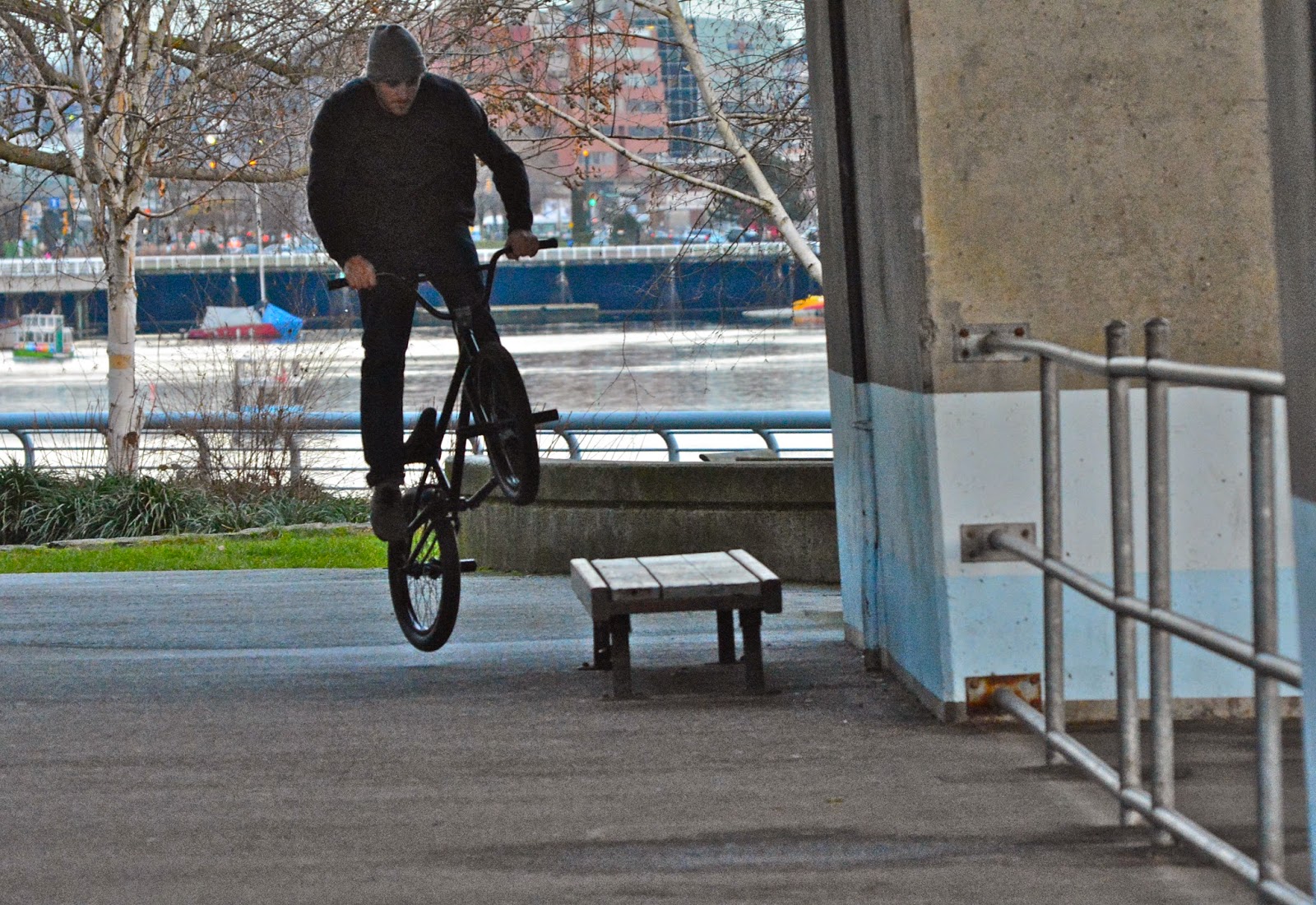 One of his Acts was to ride Along this Apparatus, 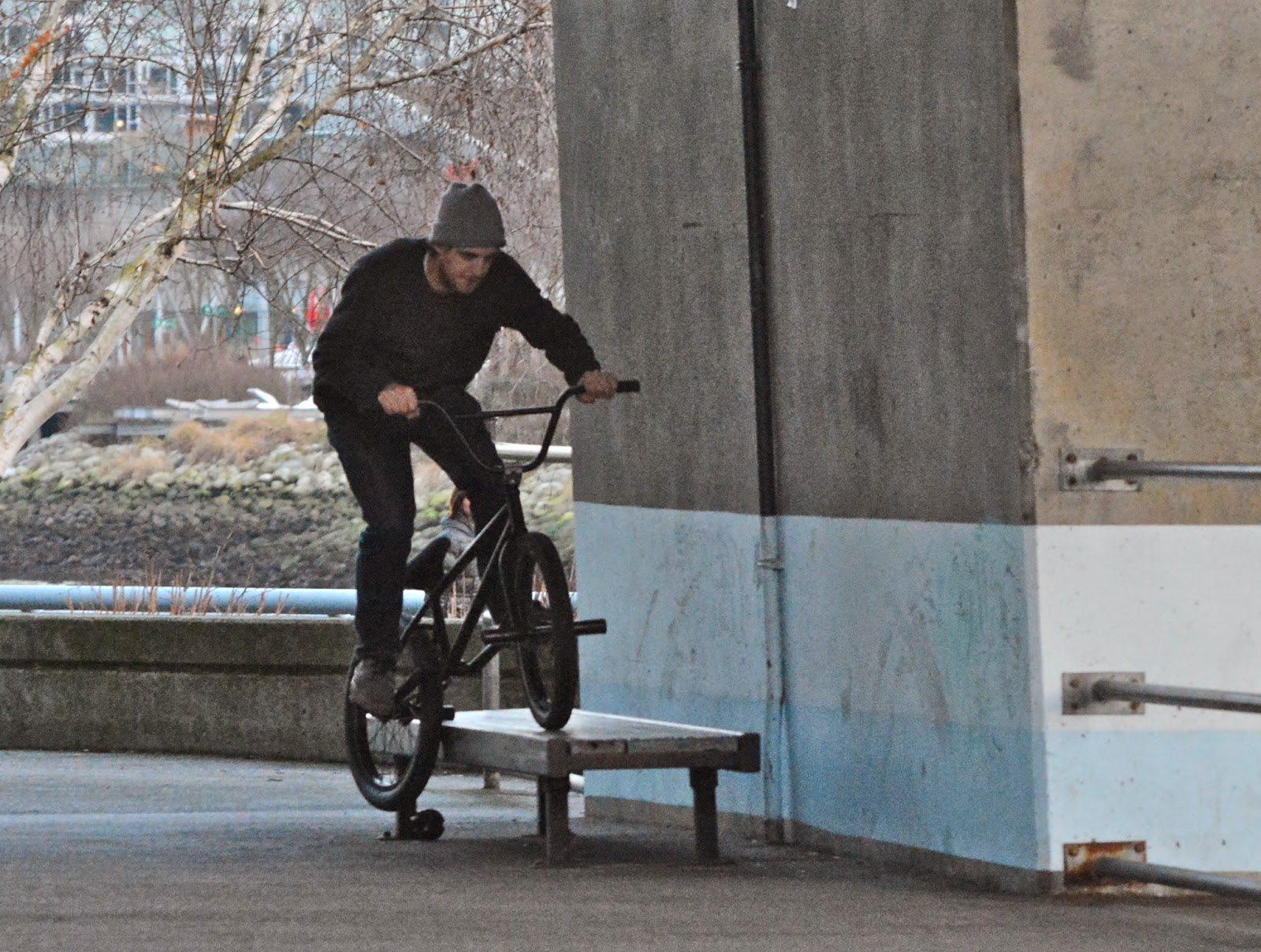 "grind" his back peg along the edge, 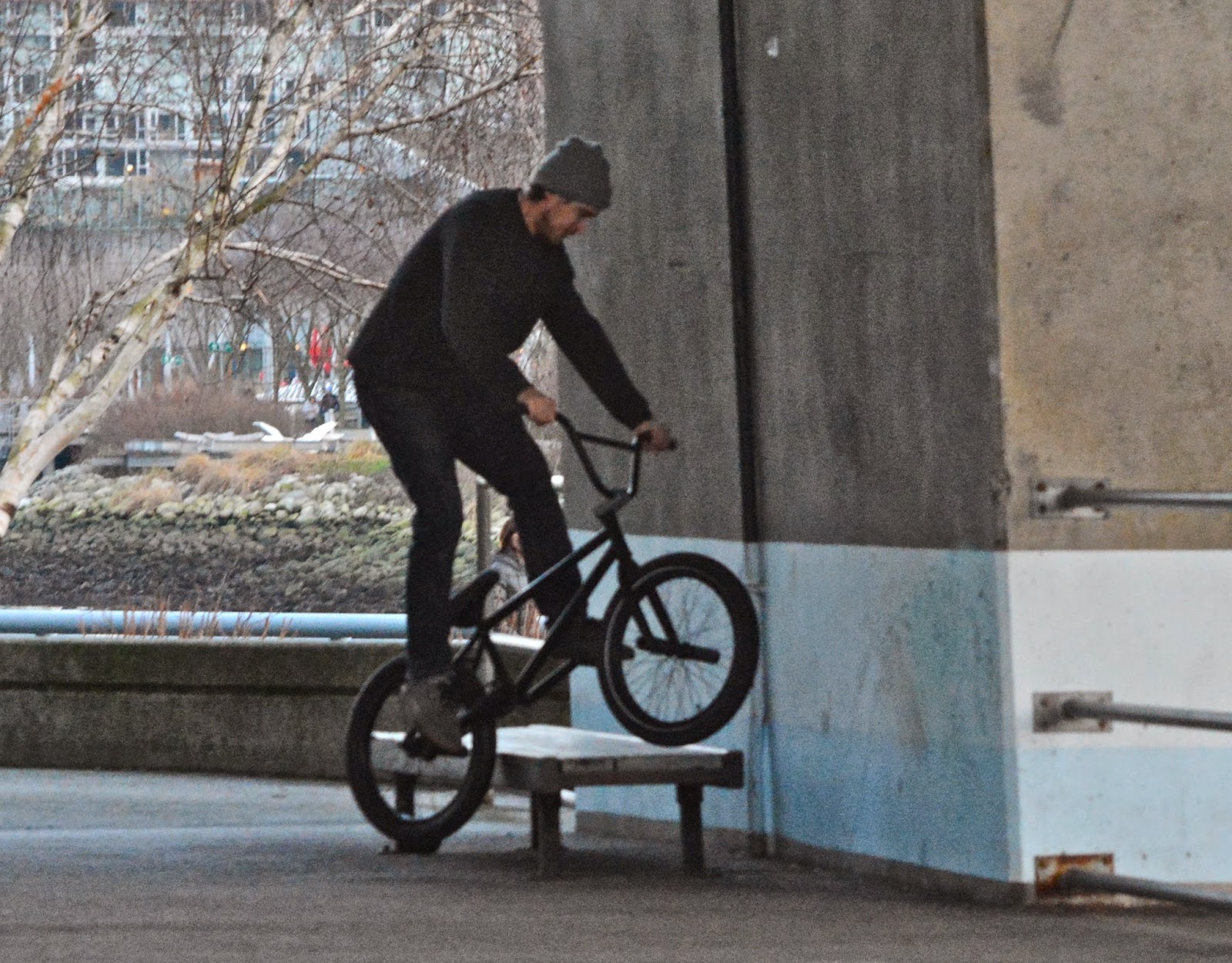 Arc Around to face the wall, 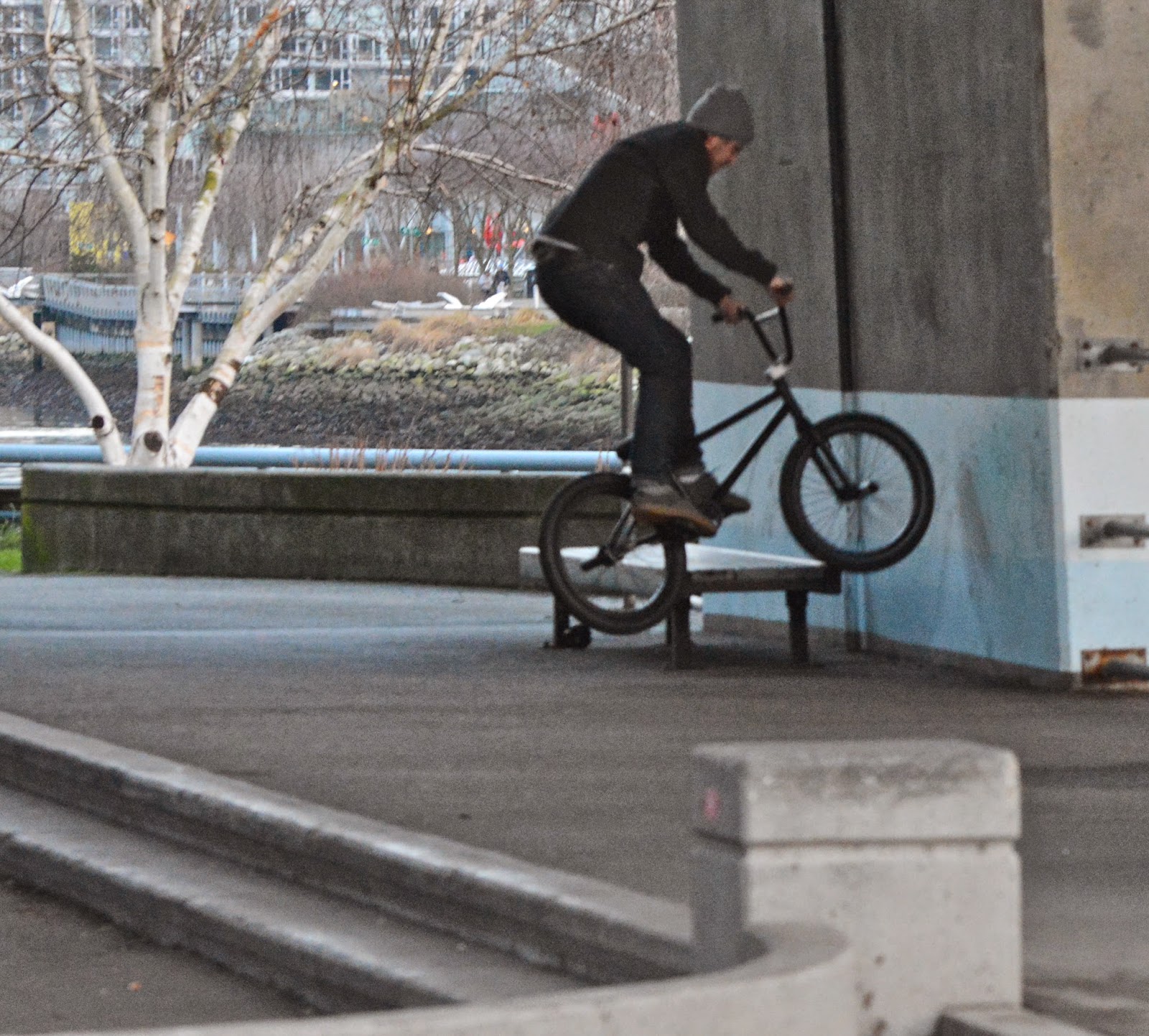 and then ride backwards.. 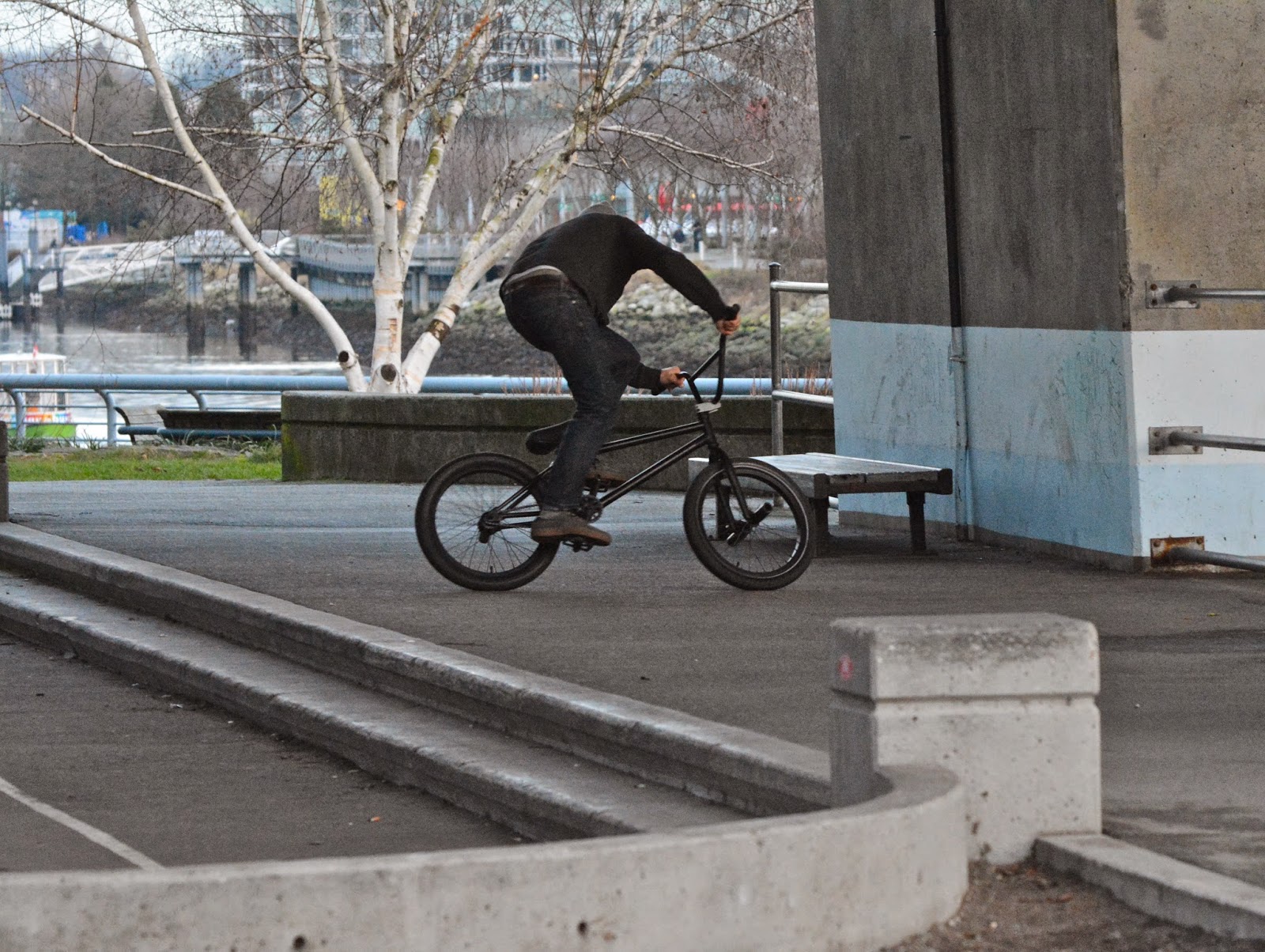 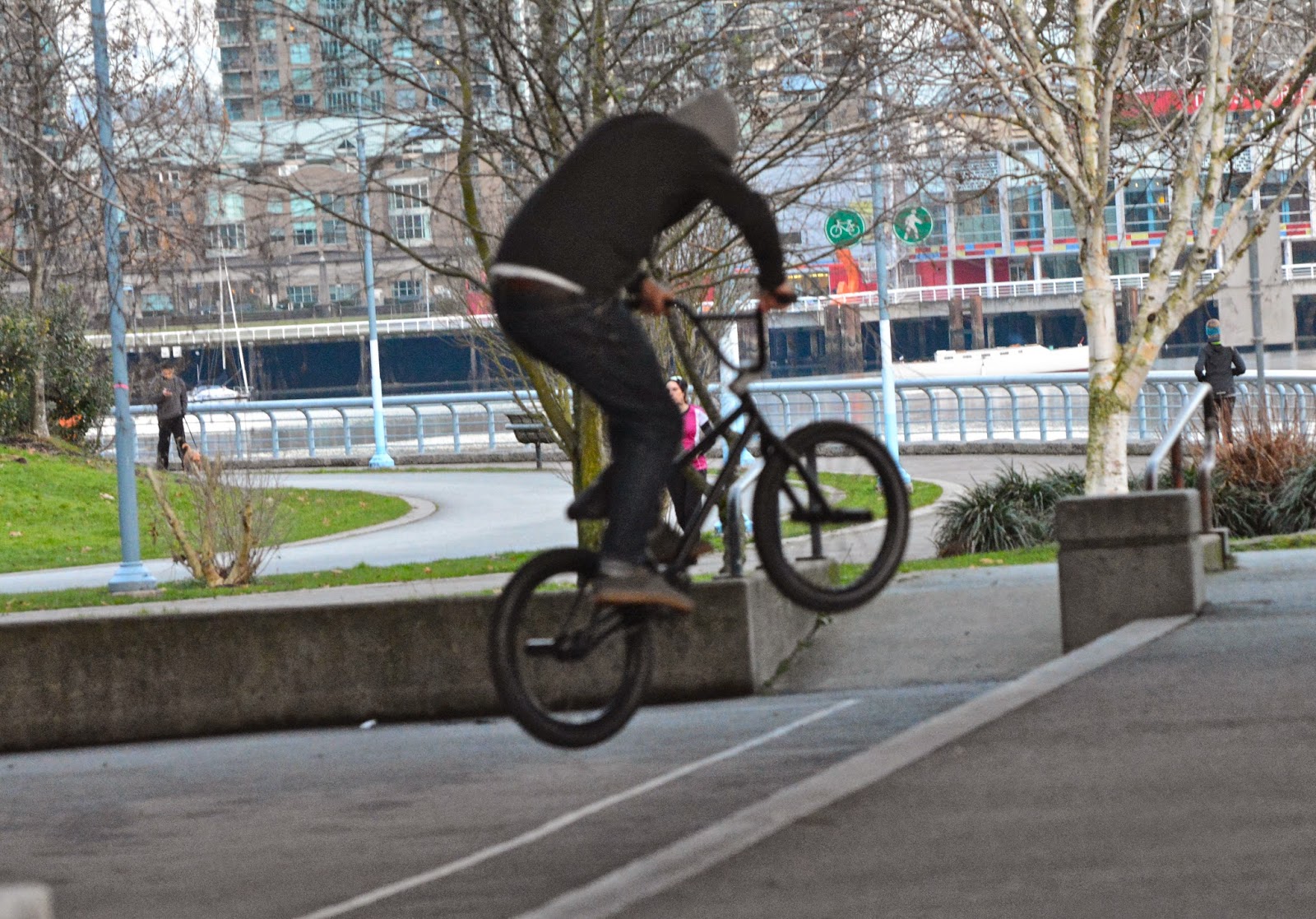 When I Approached him to ask permission to take photos, the first Aspect of his Attitude that Awed me was his Avidity for his sport.  He was, as some would say, stoked.  Immediately after that, his open friendliness to two strangers struck me. 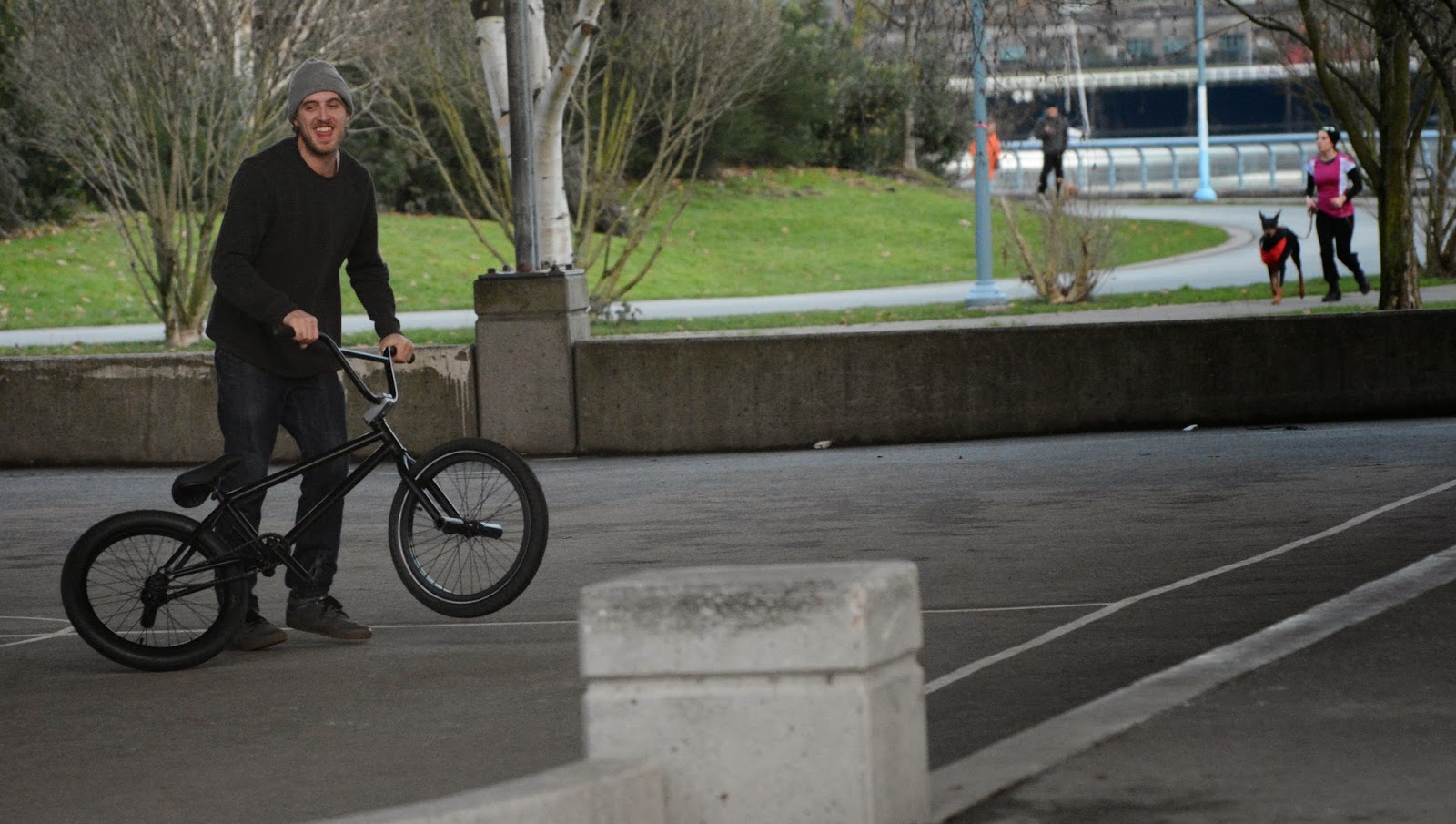 He led us to what was a wheelchair ramp many years ago, but has since been left by some very Astute park planners for skateboarders, cyclists and other Athletes. 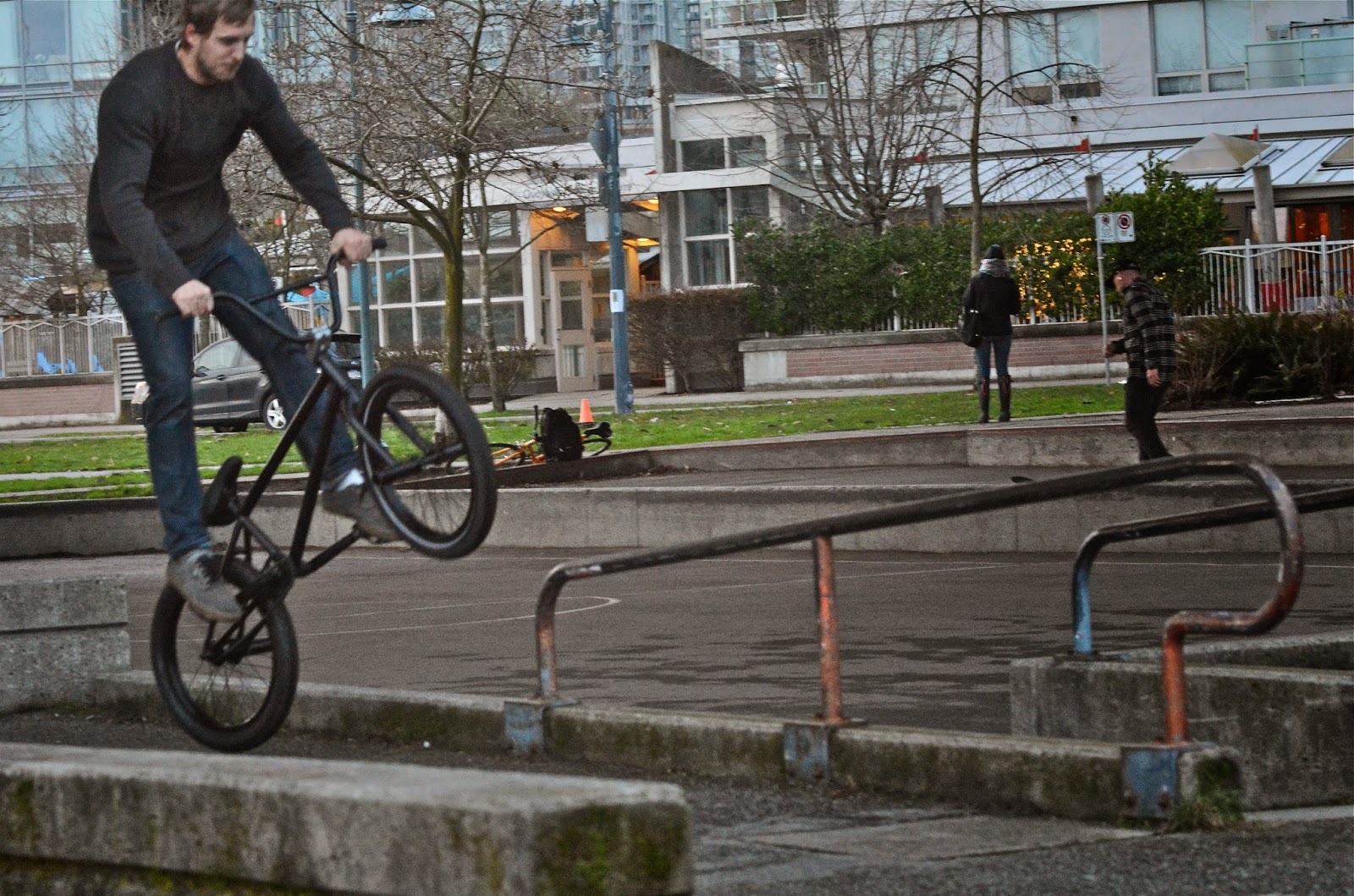 He took the time not only to demonstrate.. 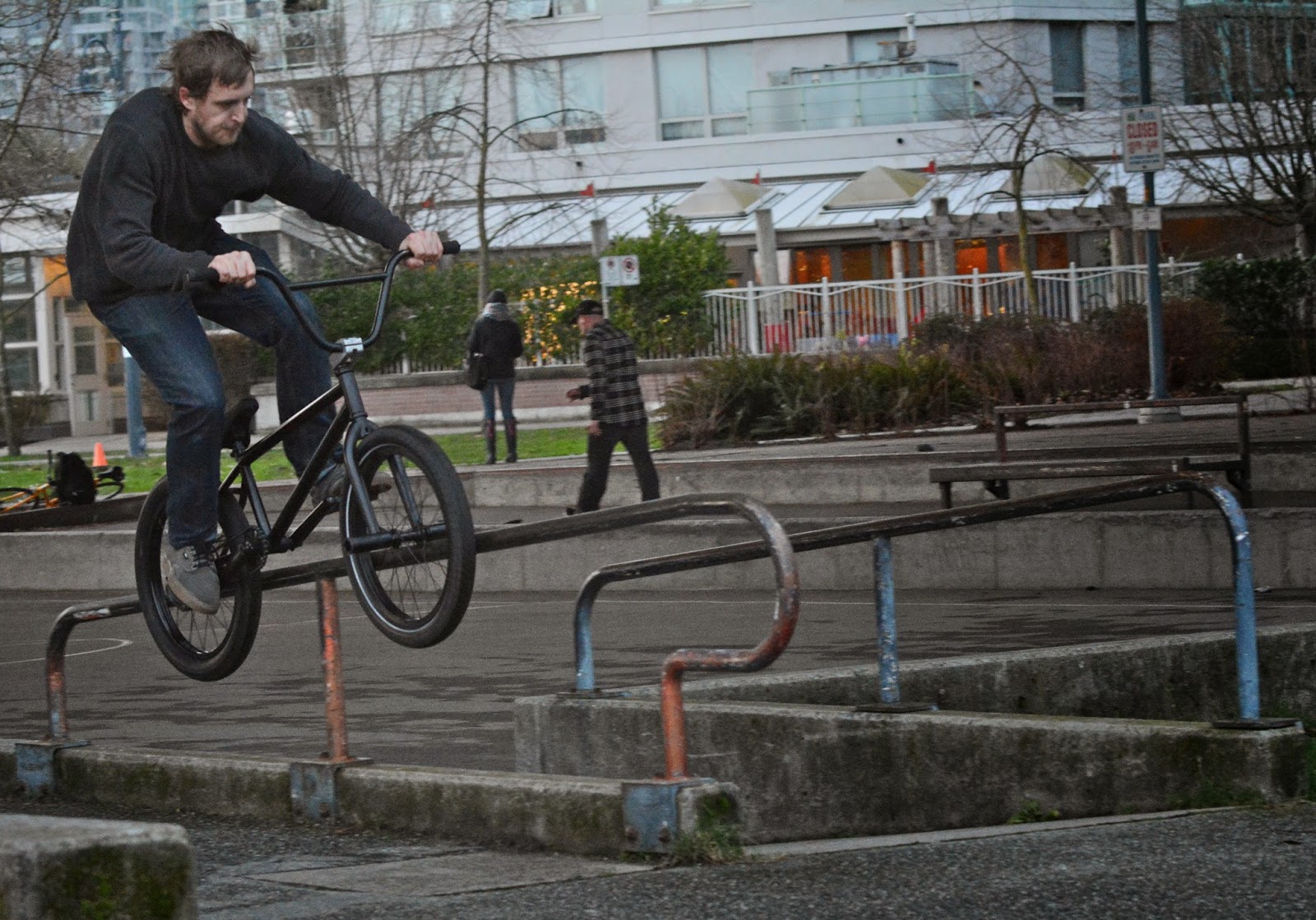 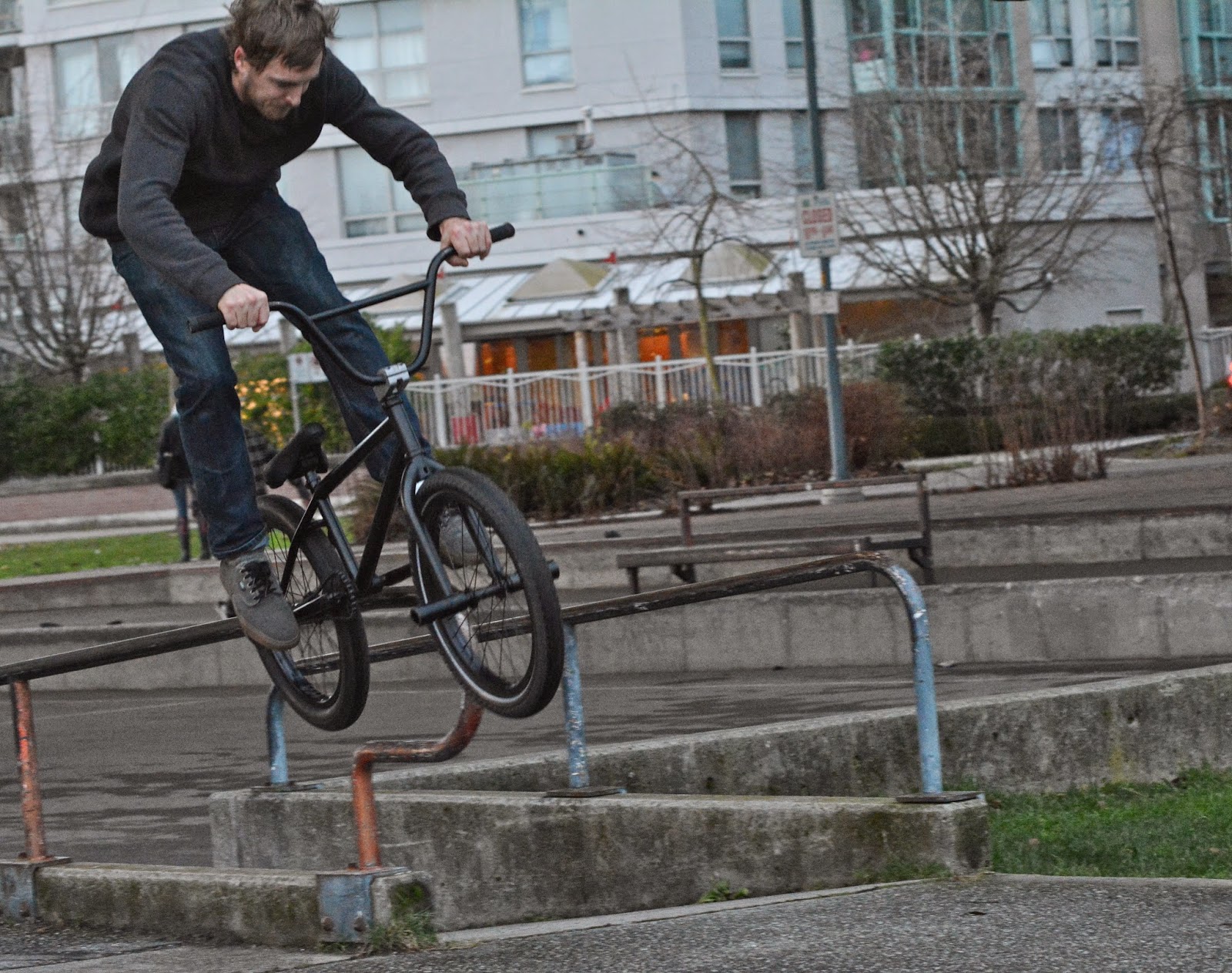 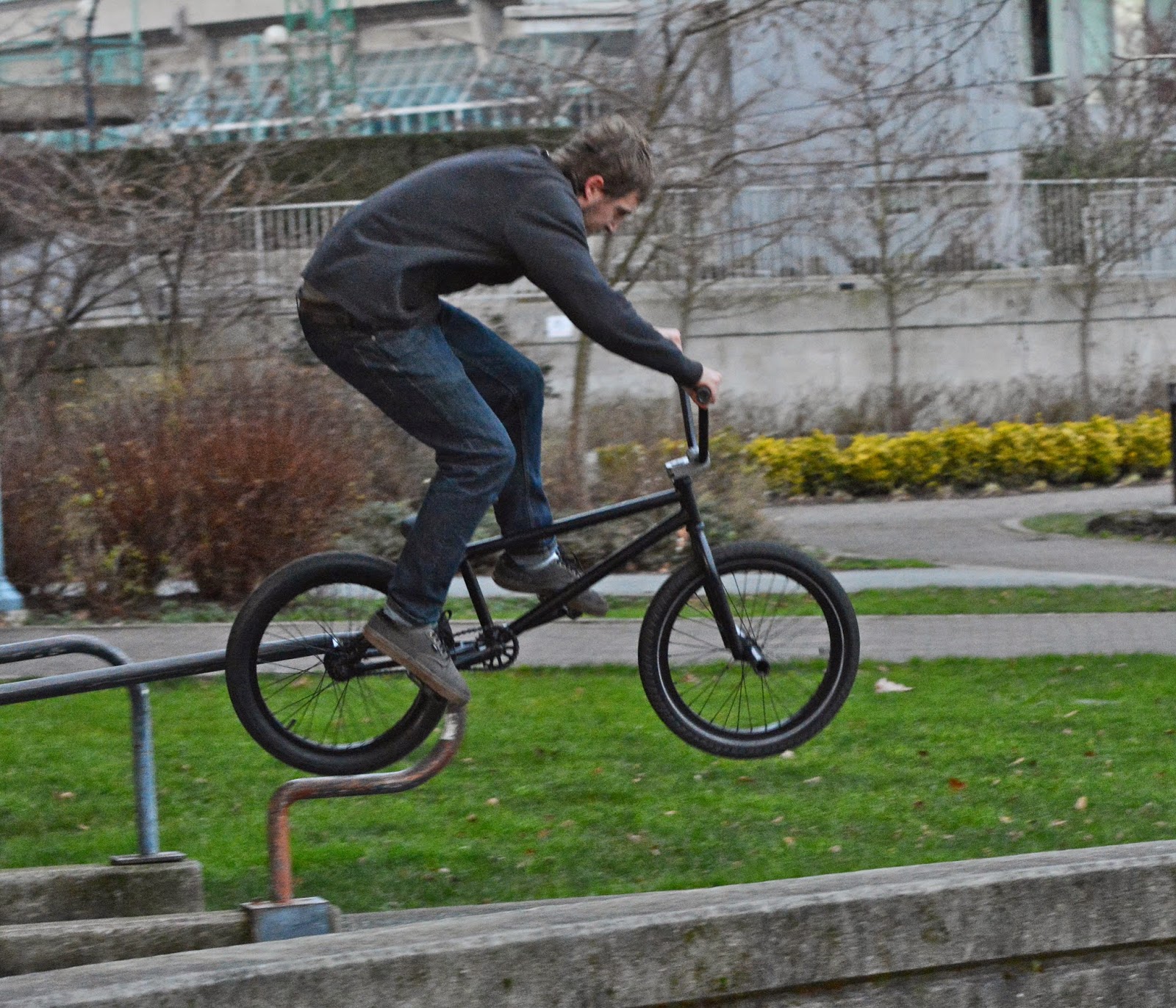 but he also patiently Answered our questions about how he stops without brakes (he stretches a foot forward or back to rest on the tire), 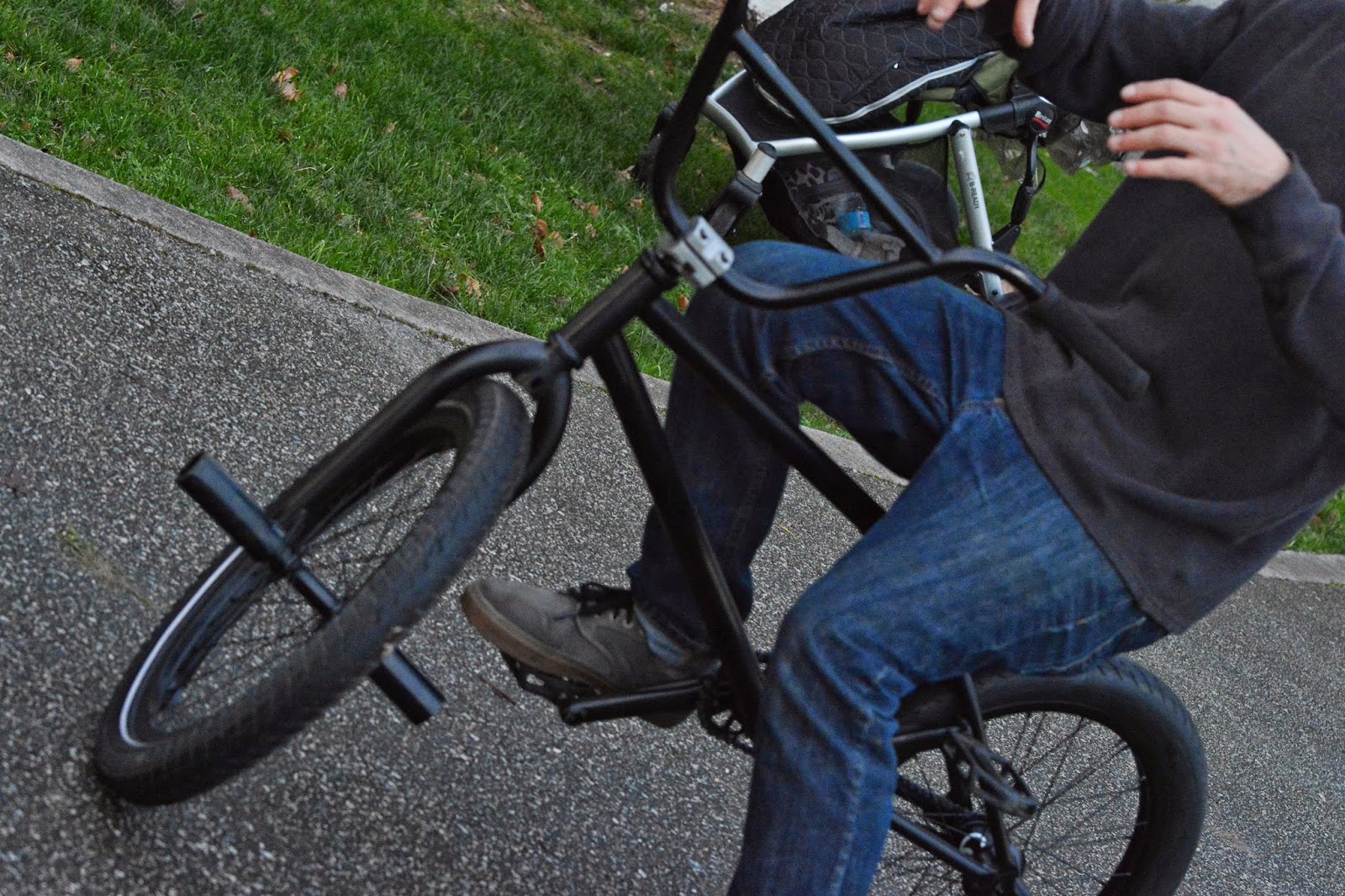 and other more Abstruse ones that he and Bill could discuss.  By the way, though this photo below is blurred, it is one of my favourites.  Bill is holding Black Jack in one Arm (so I will be free to take photos), has my pom-pom hat Attached to his coat and still manages to communicate with Dan. Bill insisted on carrying the hat in case I got cold.  And one Added note: you will be happy to learn that the young barista at Harrison Galleries tells me that my rather Ancient pom-pom hat is now in fashion :)   Black Jack Appears to be Analyzing the deeper question of what will be Available to supplement her diet once Bill puts her down :) 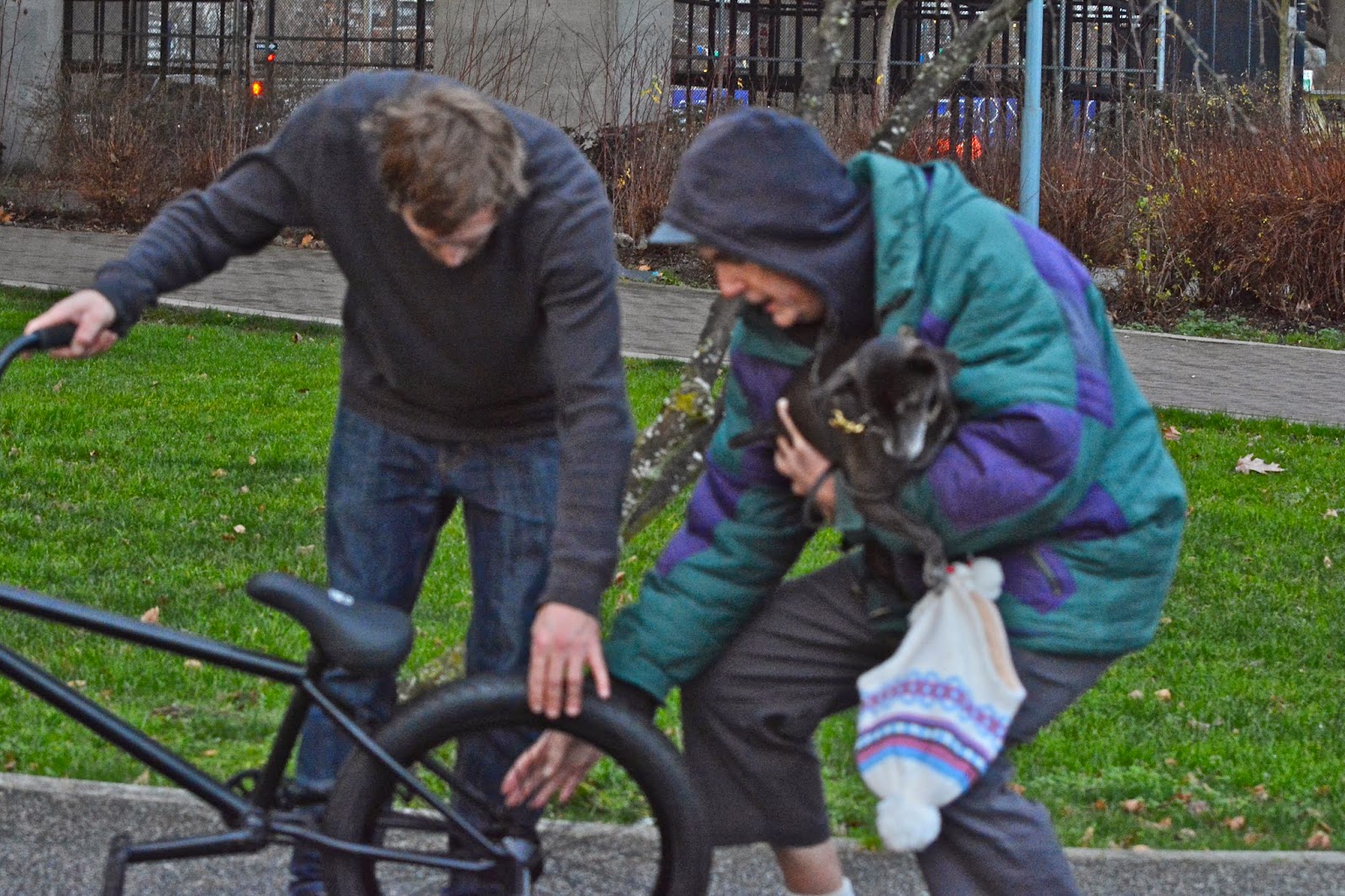 Dan also showed us one of the ways things can go wrong during a trick.  I think I'm remembering correctly that it is not desirable to have the two wheels on opposite sides of the rail.  Dan told us that he is 30 now, and has only recently taken up BMX-ing again after an Accident ten years ago.  I think I understood something of his happiness in his current Achievements because of my return to the piano.  He also told us that he has lived in this Area for many years, and remembers the changes from his childhood.  All interesting to us and though I'm much later than planned in sharing these photos with him, I hope he'll see the post.  We learned a lot from Dan and Appreciated his time and the sharing of  his passion. 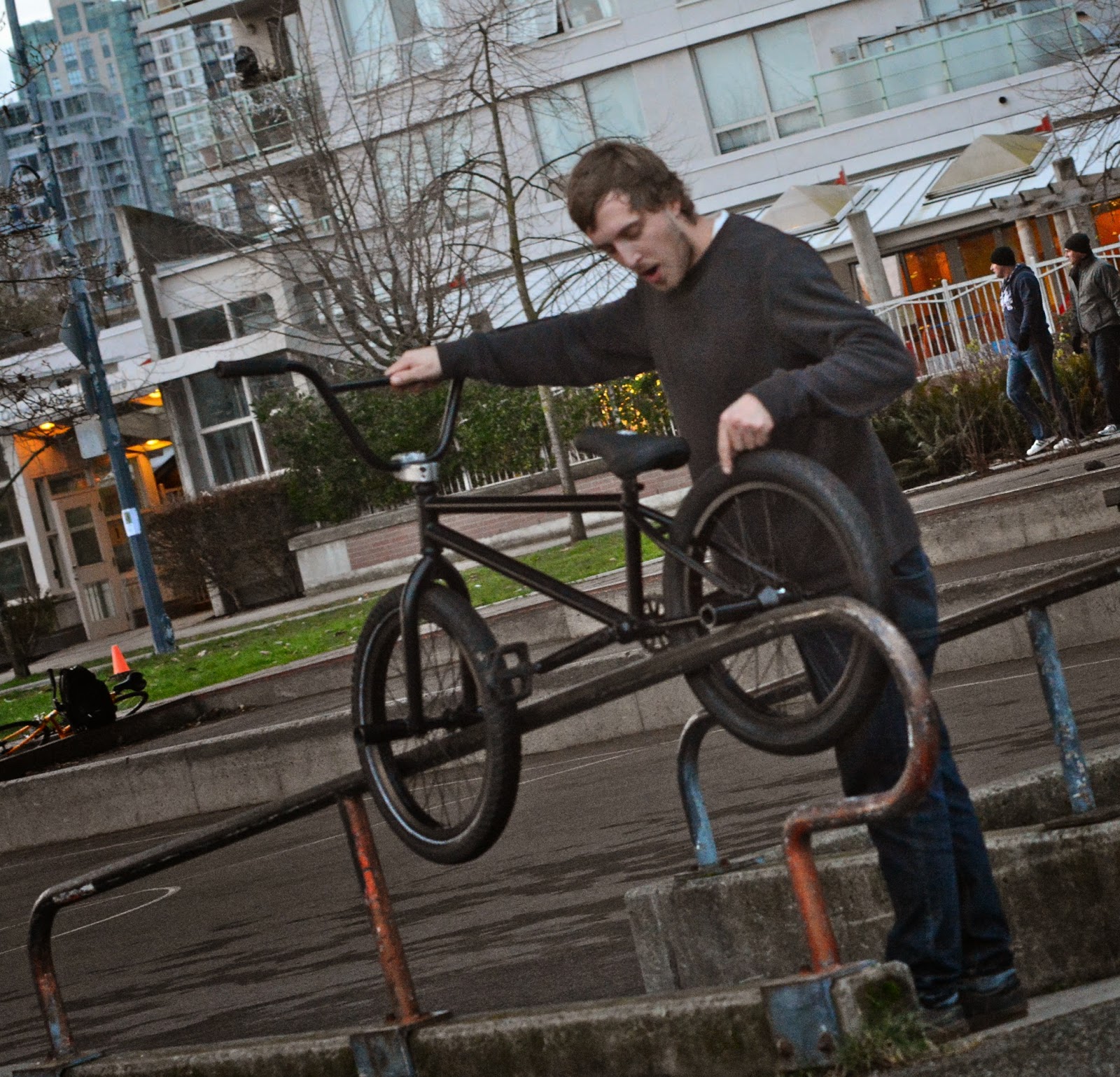 4. Observing a skateboarder's Arms
While we were talking with Dan, I was also catching some shots of a skateboarder working hard in another corner of the skatepark.  I don't know if he would feel insulted to be compared to a dancer.  Check out how he uses his Arms..
*(Dan, if you happen to see this, I have many more photos of you, and also a few more of the boarder.  Do contact me if you (or he) would like them in a facebook or dropbox folder.) 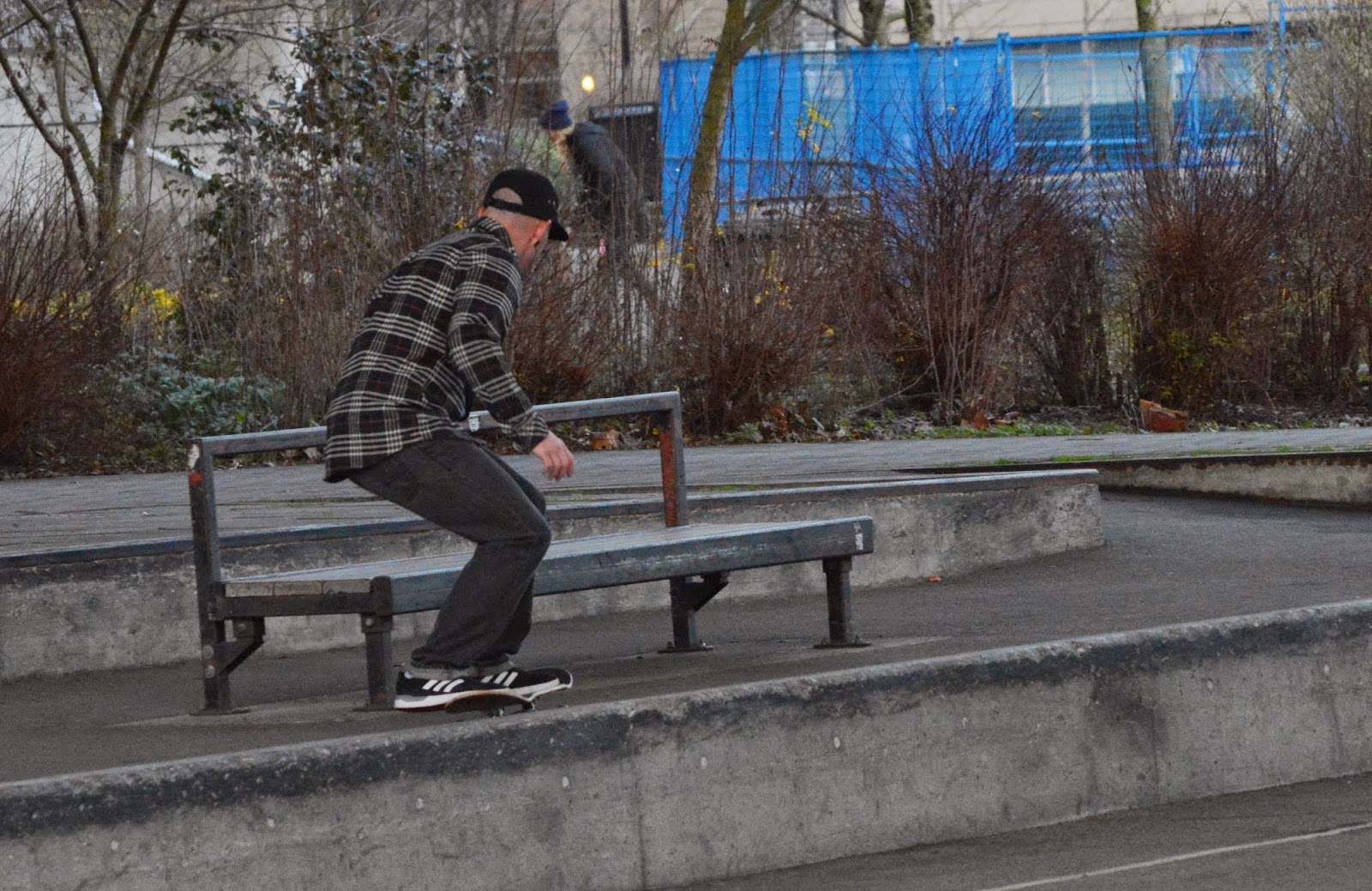 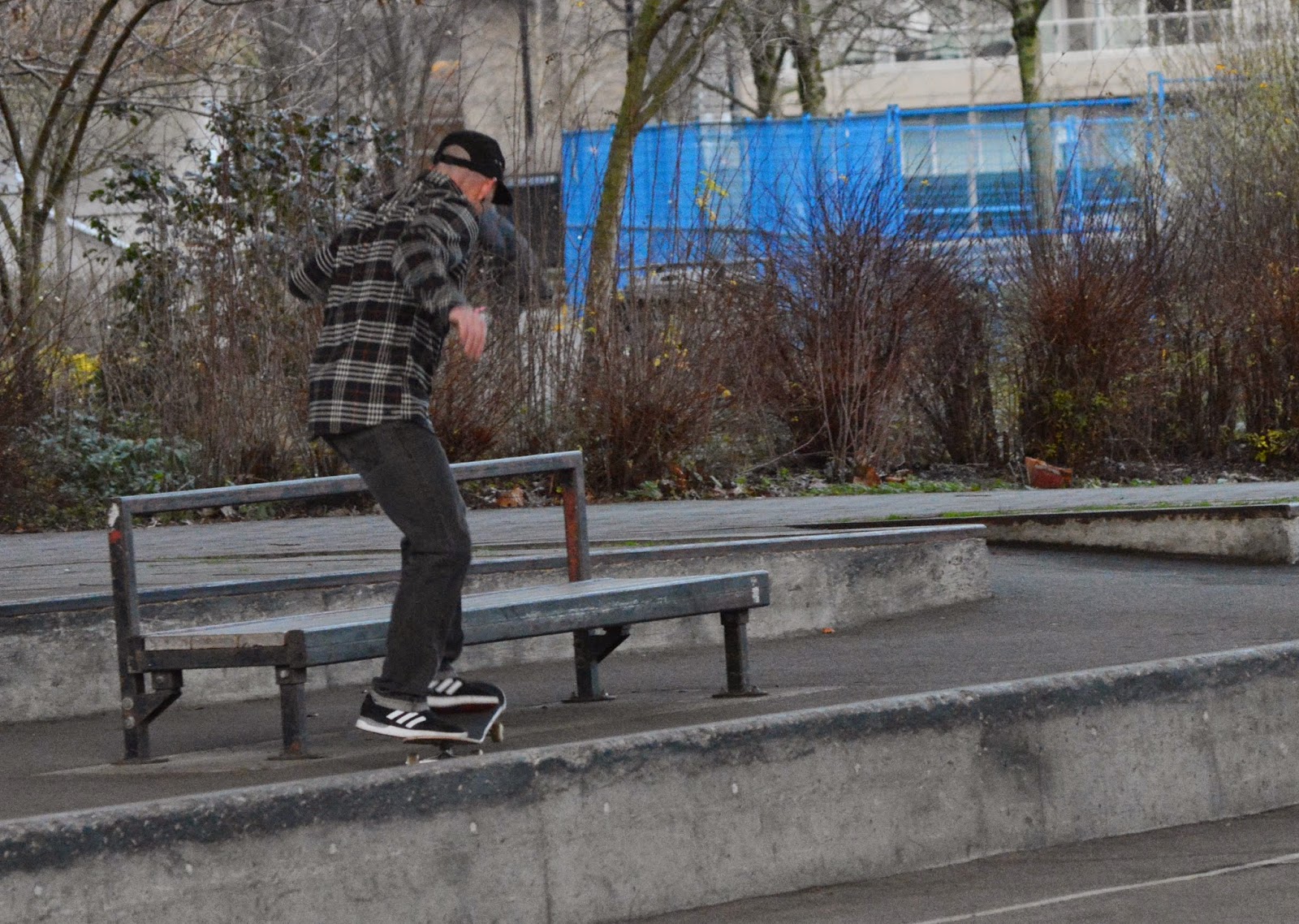 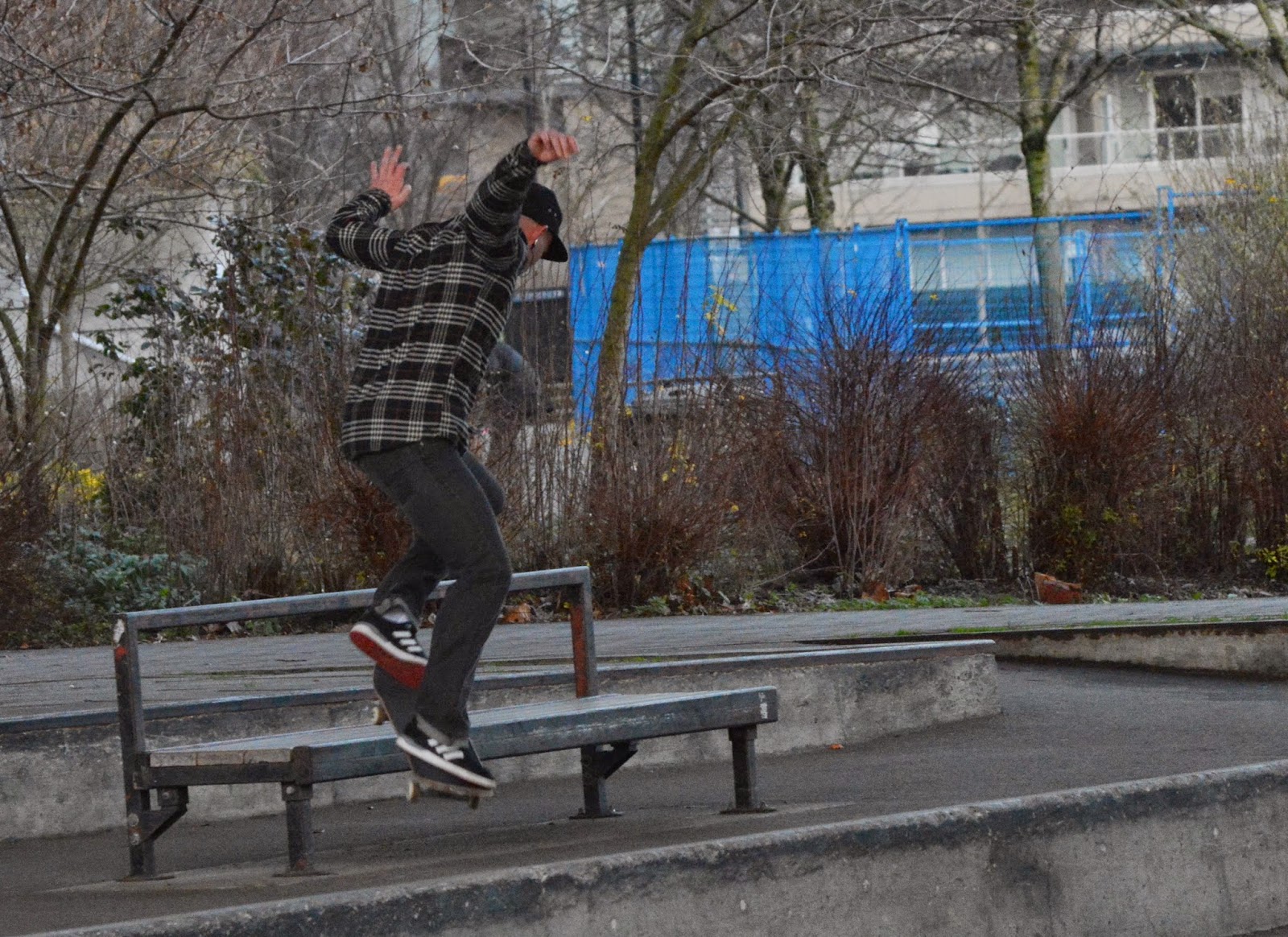 and then to balance as he moves forward. 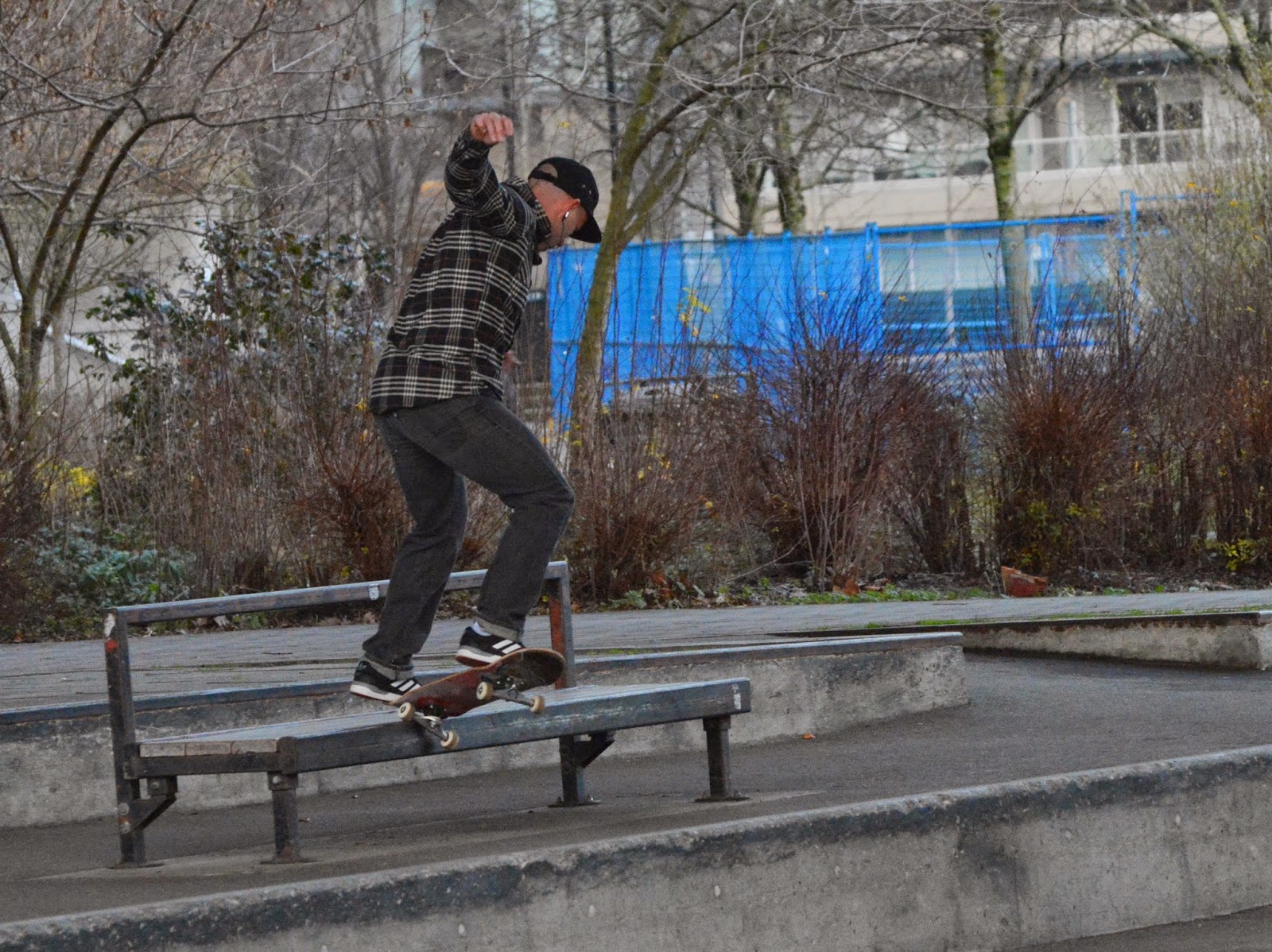 His jumps were pretty neat too, and this one, I can Assure you, was landed perfectly. 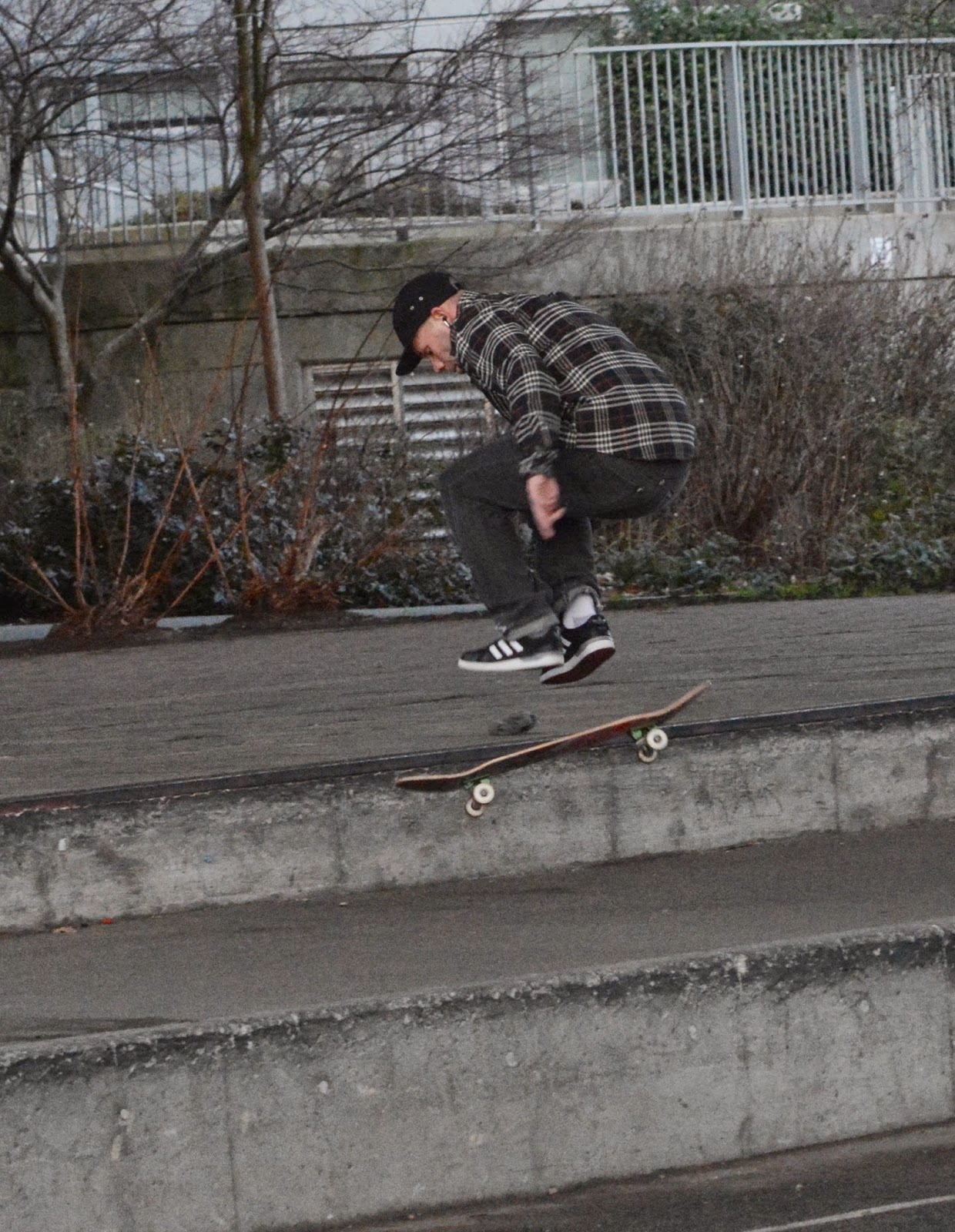 5. Flowers in the Winter season
Having grown up in Quebec, we Accepted that there would be no blooms or blossoms between (Approximately) the months of October and May.  It still thrills me to see blooms in January, as we do every once in a while in Vancouver.  After we left Dan, we saw a few rose blossoms beside the park.  They were a little bit bedraggled but still lovely, 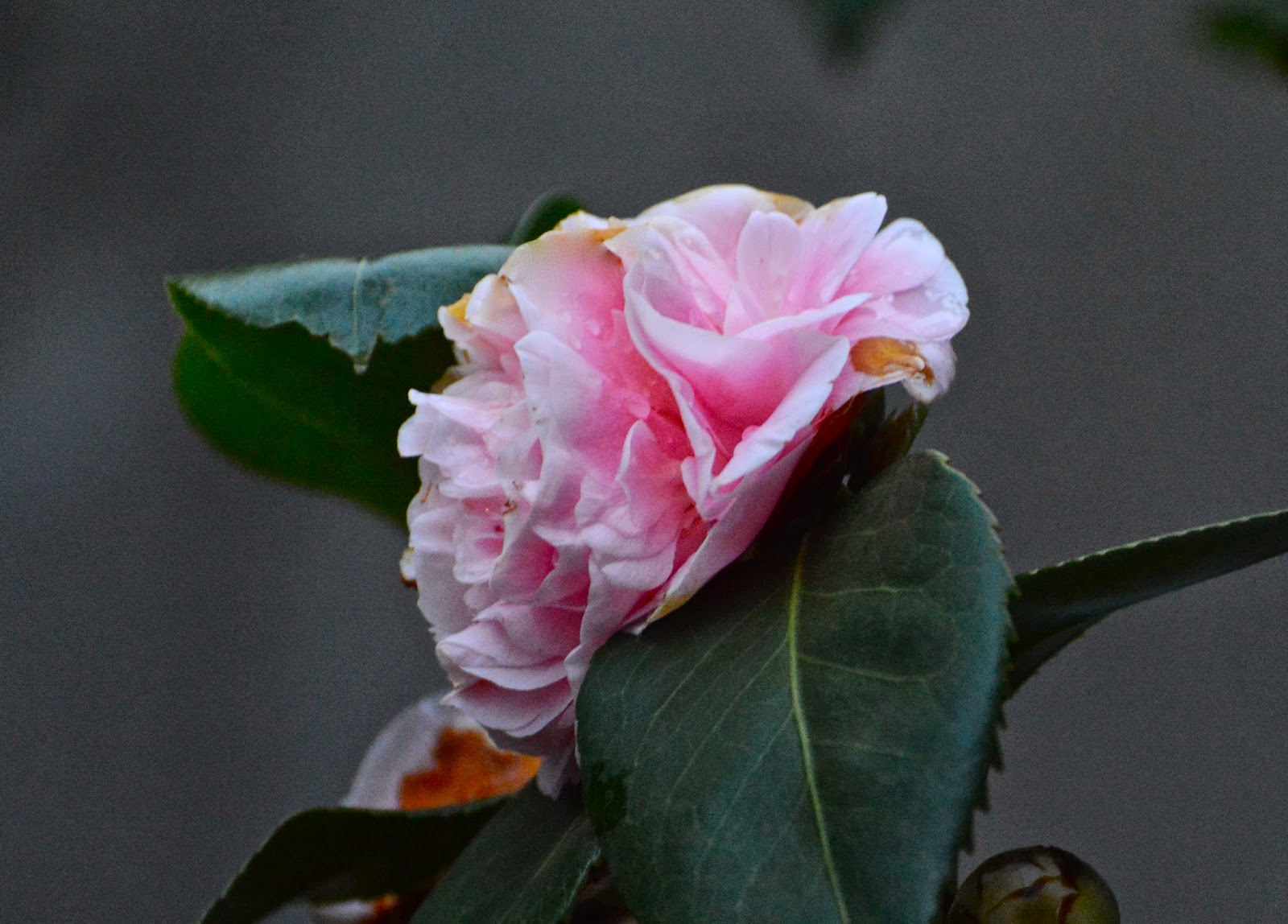 and there were lots of buds ready to open. 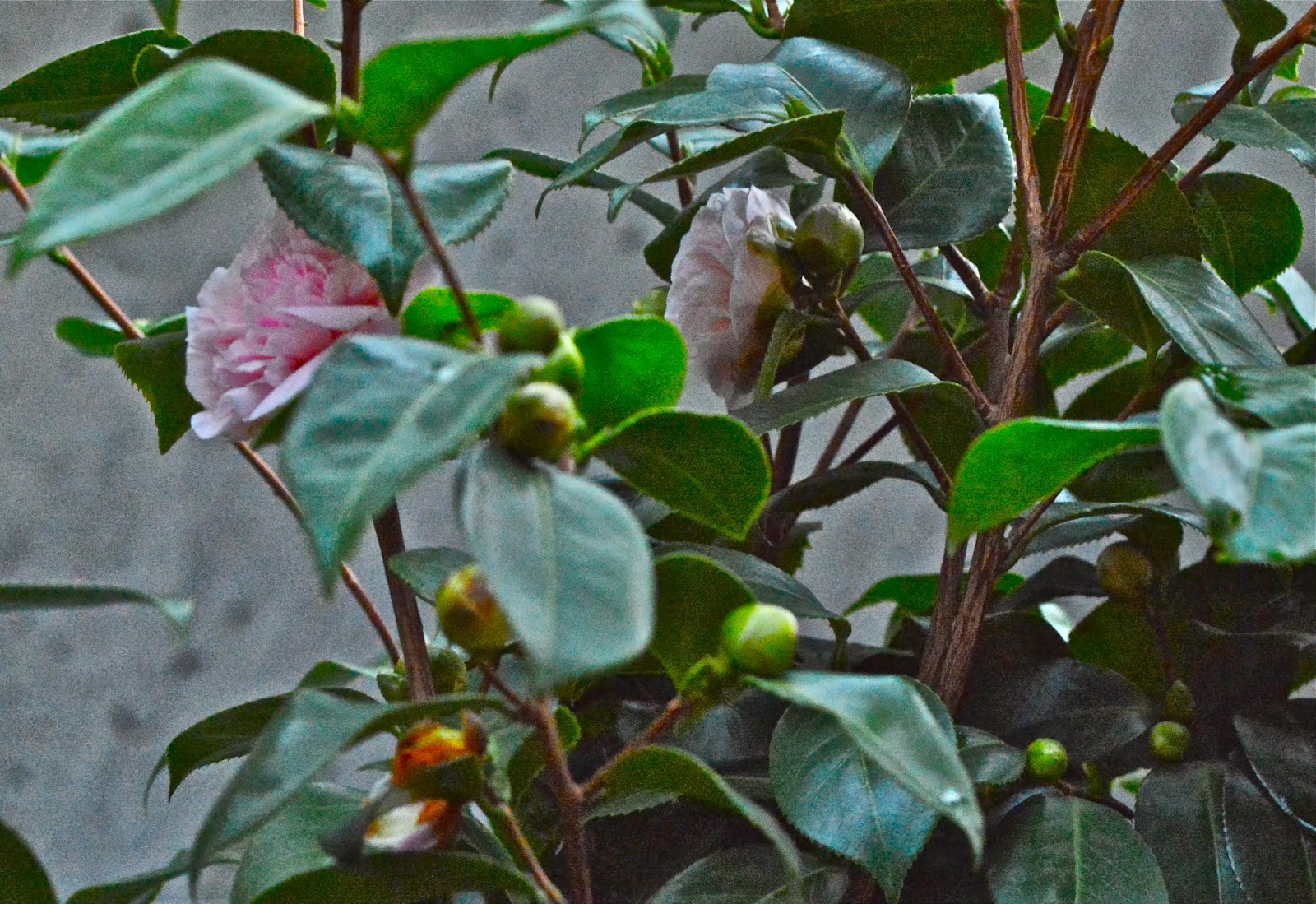 There was Heather as well, Alive and even flourishing.  Another Yay! 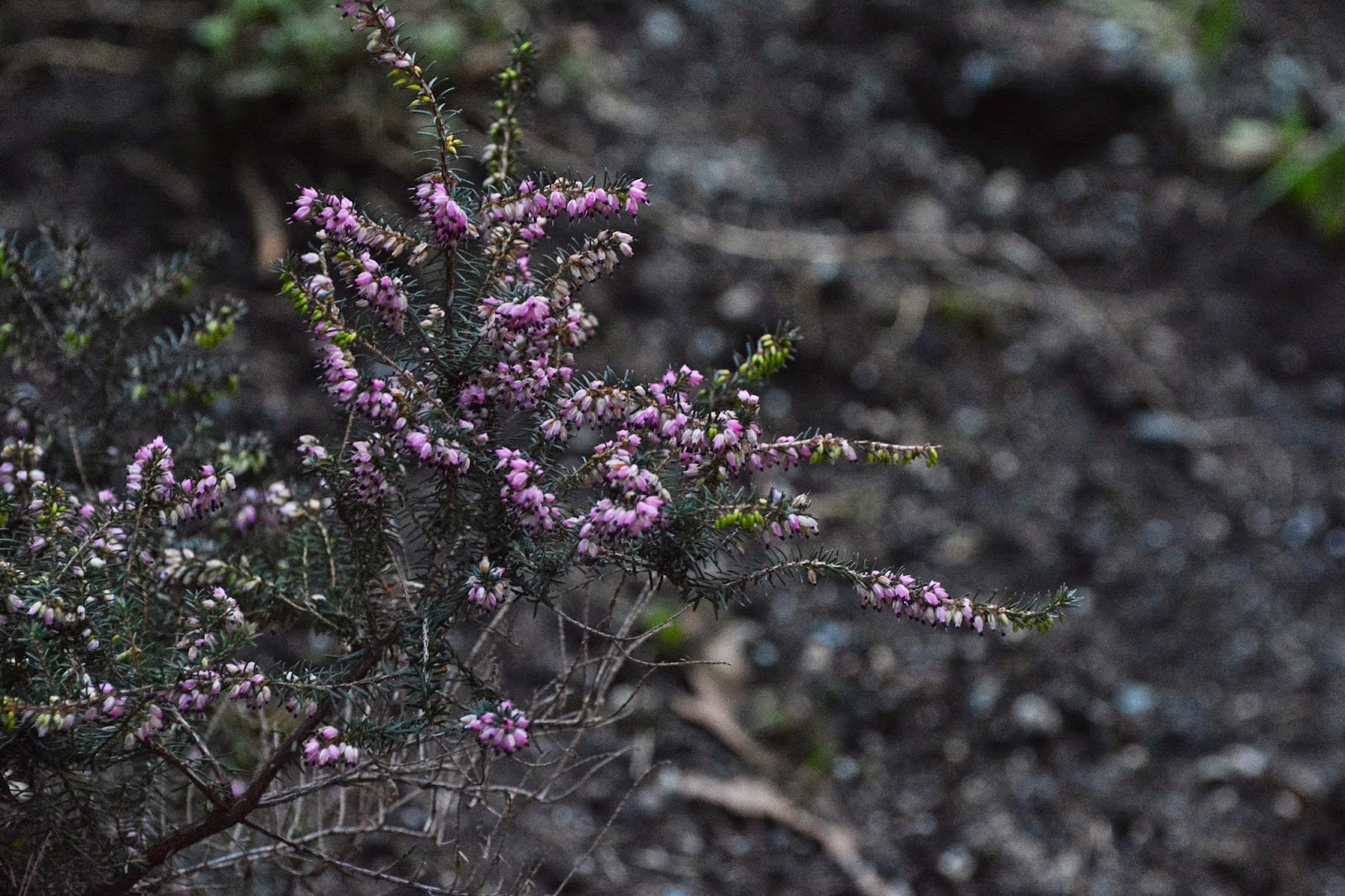 6. An unusual word that Amused me
It wouldn't feel like ABC Wednesday unless I found at least one Amusing word that is new to me.  "Arachibutyrophobia" is a fear of peanut butter sticking to the roof of one's mouth.  Click here to learn how to pronounce it.  I found the image at this site.  Who knew there is even a t-shirt to help us remember that word? 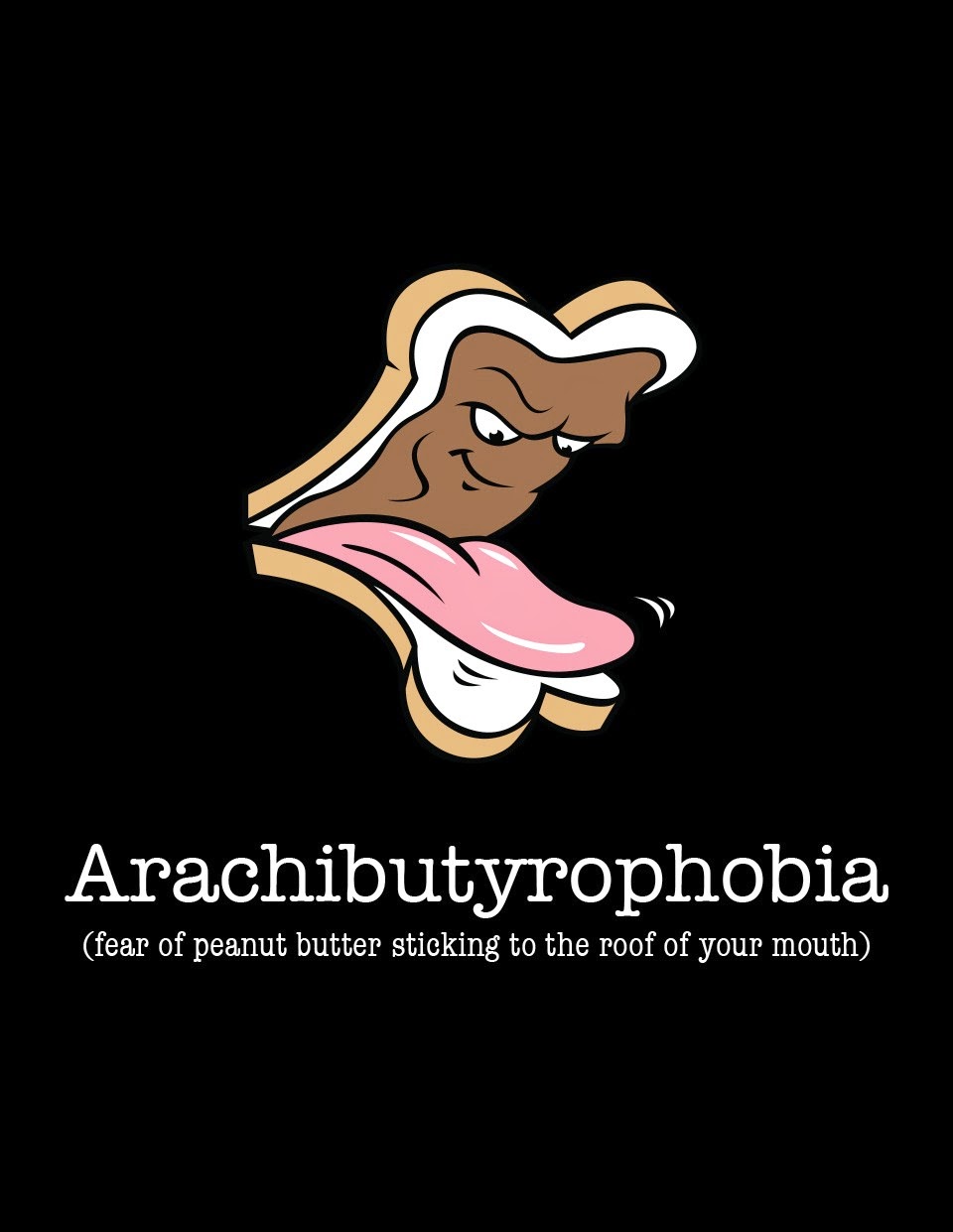 Thanks so much for stopping by.  If you haven't visited ABC Wednesday yet, I can promise you lots of Alluring and Admirable thoughts, should you find the time to take a look at the many ways to Approach one letter of the Alphabet.  Who knows?  You may even be tempted to contribute an entry of your own.
Posted by Black Jack's Carol at 10:46 AM