From Blah to Spectacular

Bill's brain healing in a plateau, we were both feeling a tiny bit "blah" yesterday morning.  By the end of the day, however, we realized it had been a good one..  maybe even an extraordinary one.  I'm going to post our photos to Friday Photo Journal.  Thanks, Melissa, for giving us a place to record the good times.

The heat spell had kept us off our bikes for three days, but we knew getting back on them would make us feel better.  Bill remembered that I had wanted to stop by these wood stump carvings near Science World, so he suggested we make that our destination. 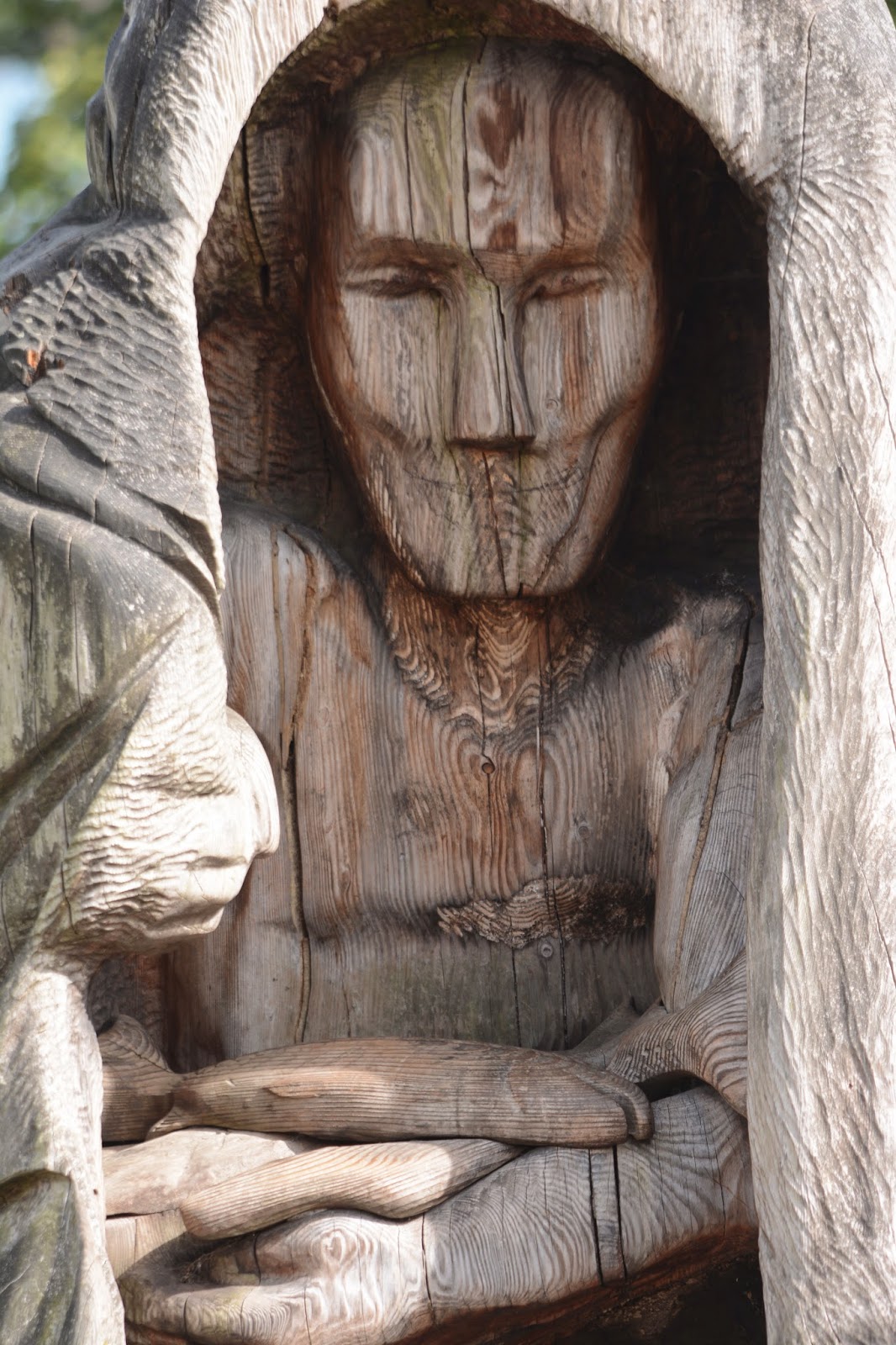 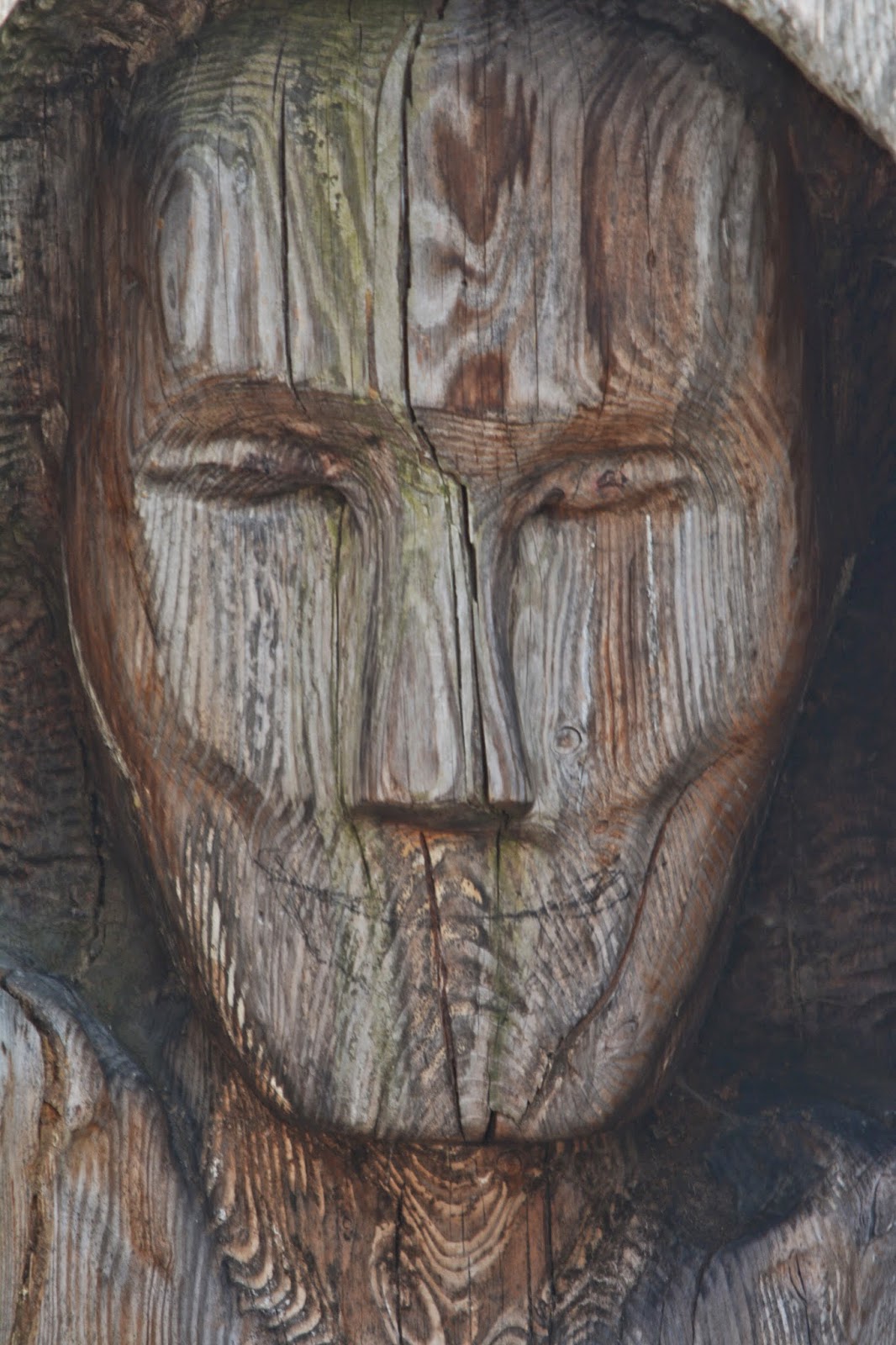 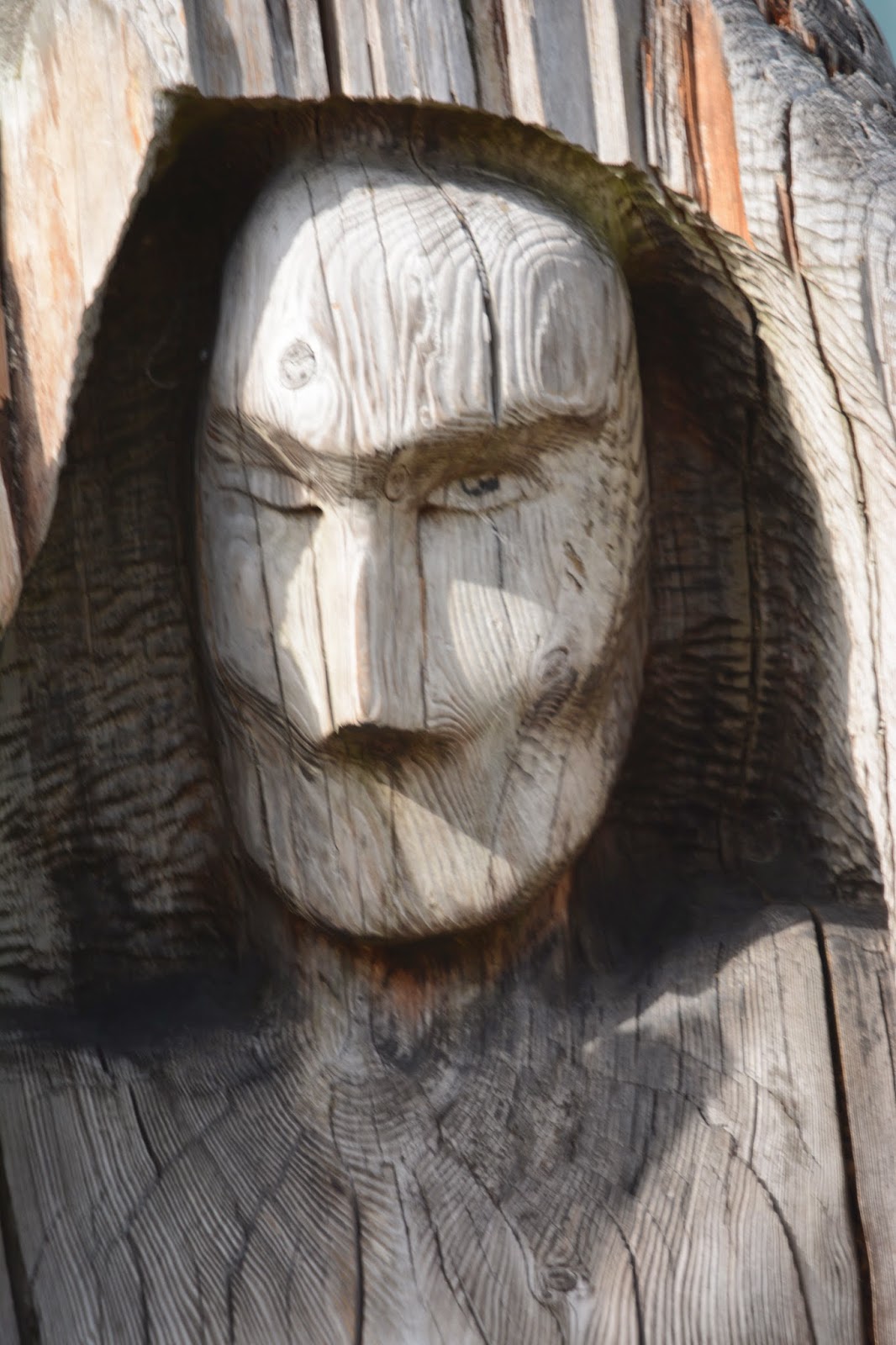 and even the weathering details added drama to a narrative I yearn to understand. 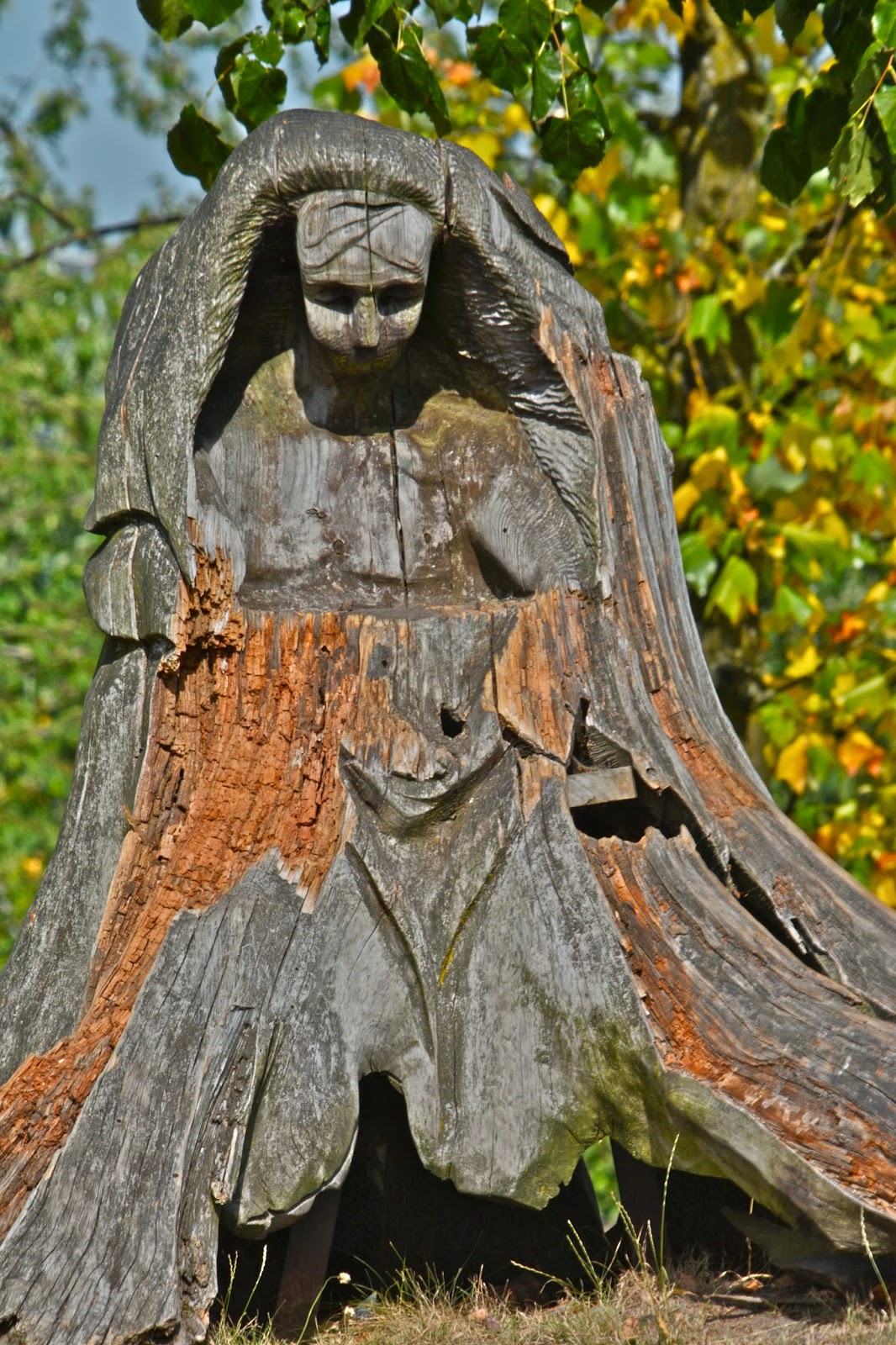 Only my largest lens was working, so I can't give you the full picture here, but there are more images carved into a sort of basin.  I sat on the edge of it, and realized it represents a wave.. 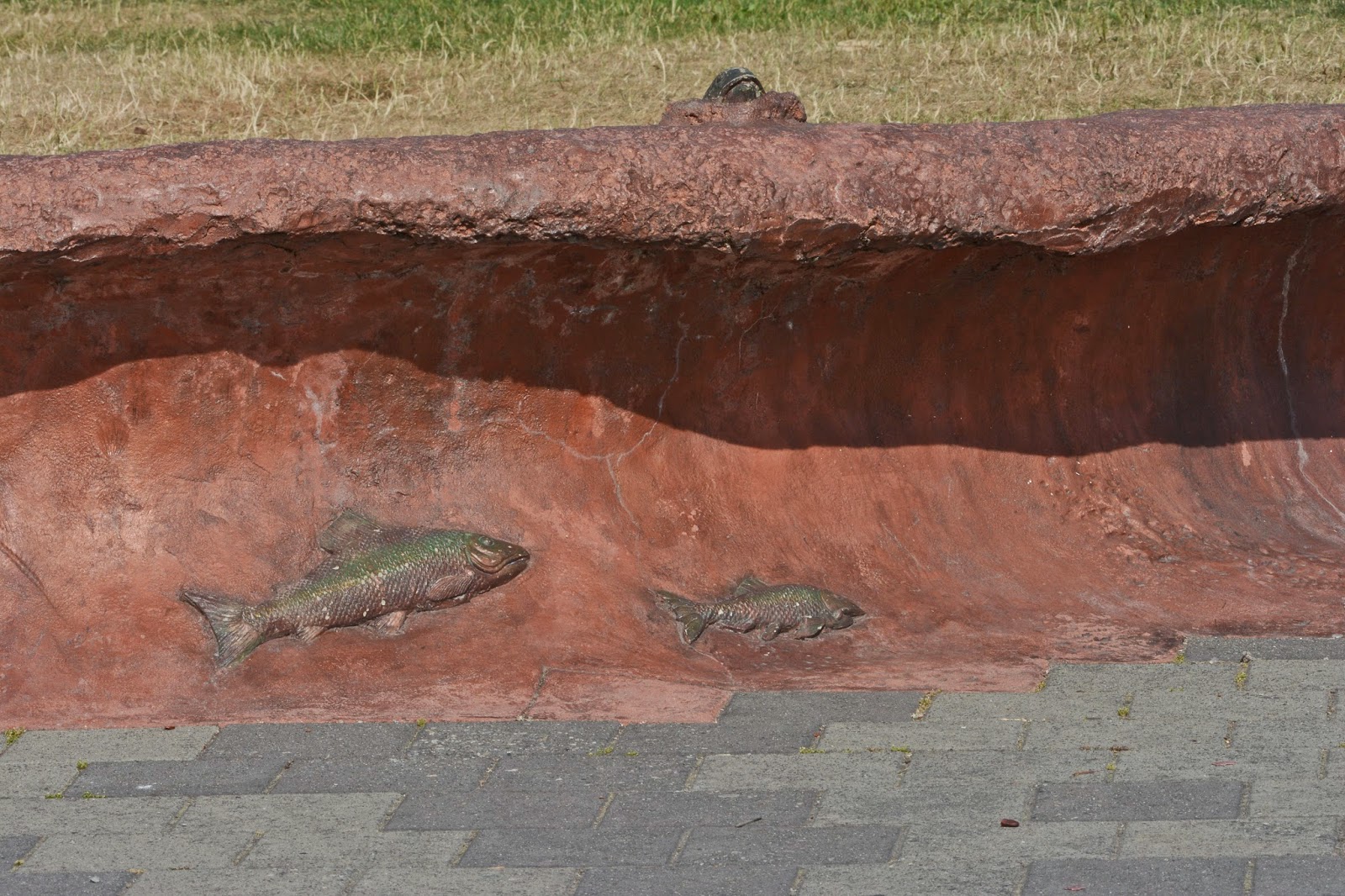 with ocean life swept along it. 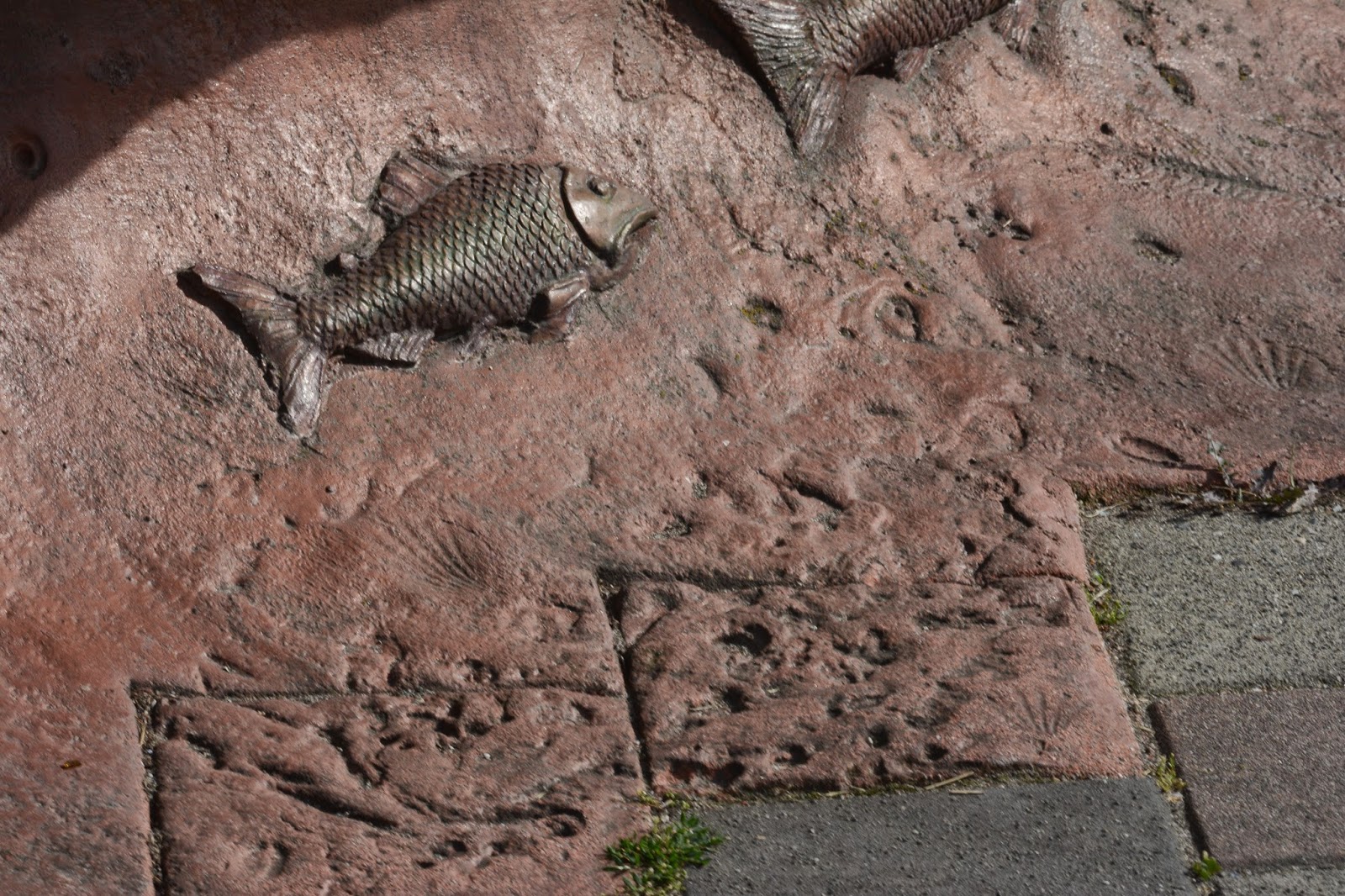 The tree trunks are very sturdy and they have wonderful hollows.  There was a blanket at the base of this one; perhaps a homeless person found shelter there recently.  Black Jack loves to explore critter potential in trees, so she was quite content to sit in the hollow.. 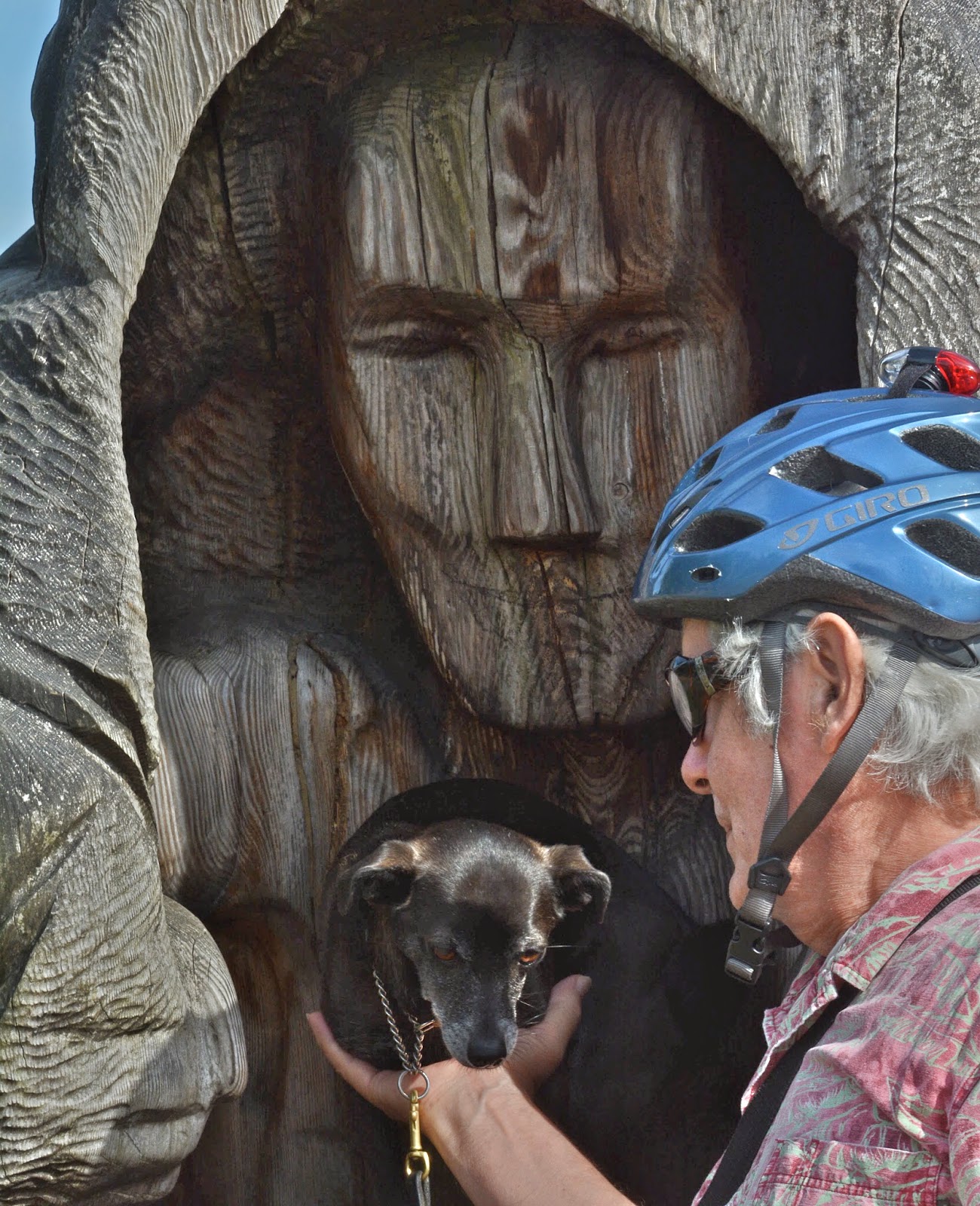 for a few moments. 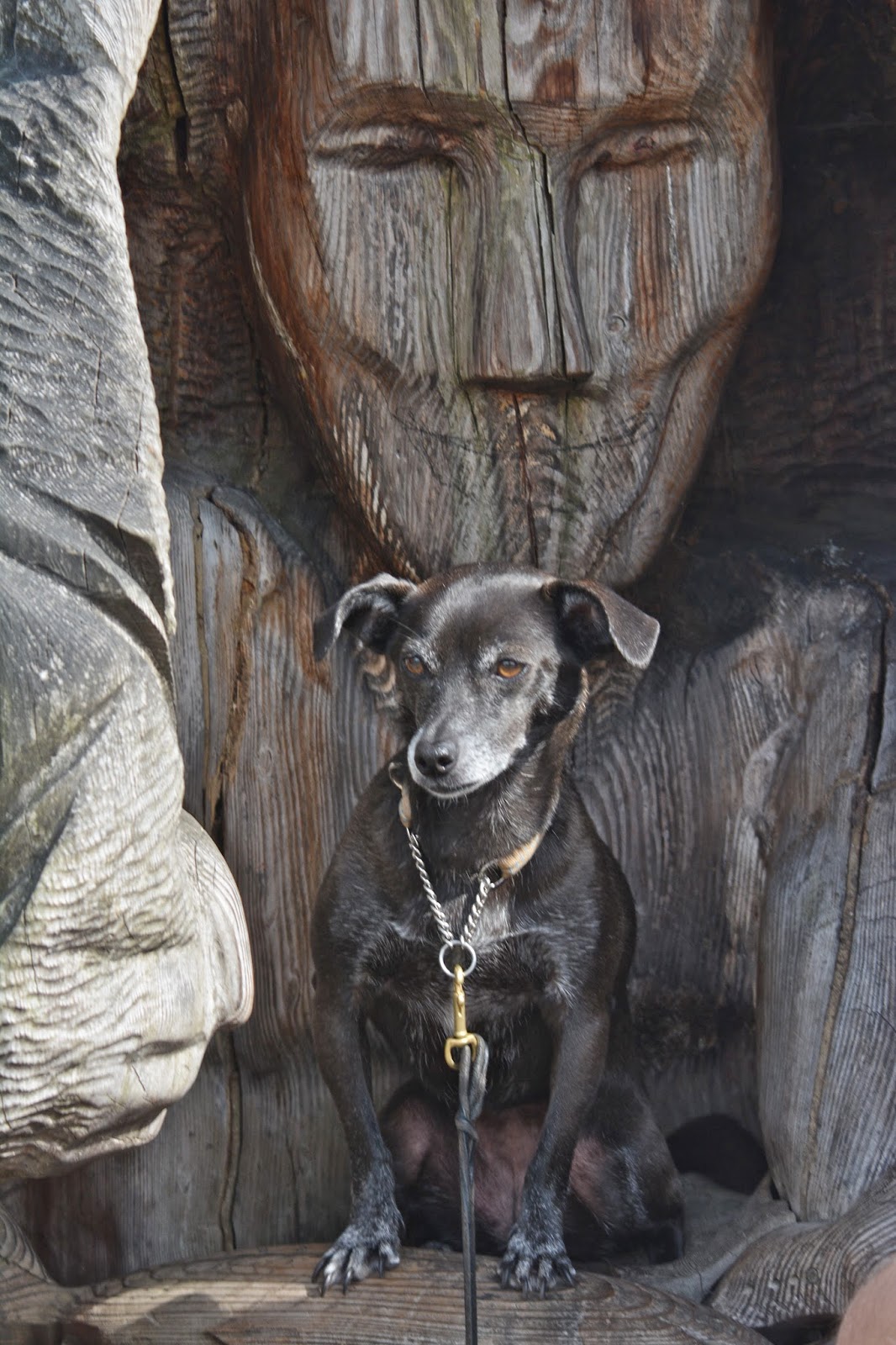 A little further around the bike path, we came across some musicians setting up for an outdoor performance. 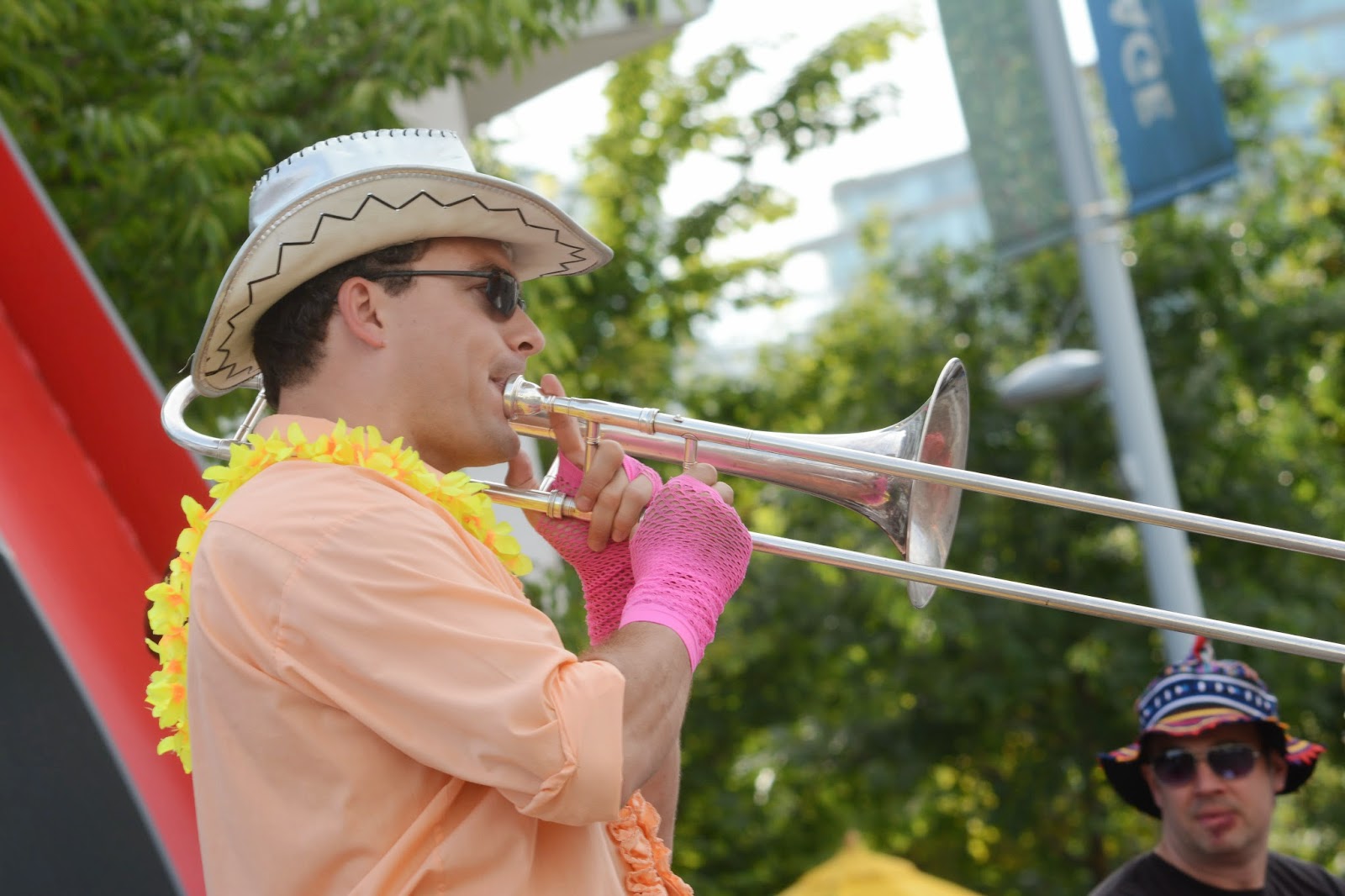 They obviously were fun-loving.. 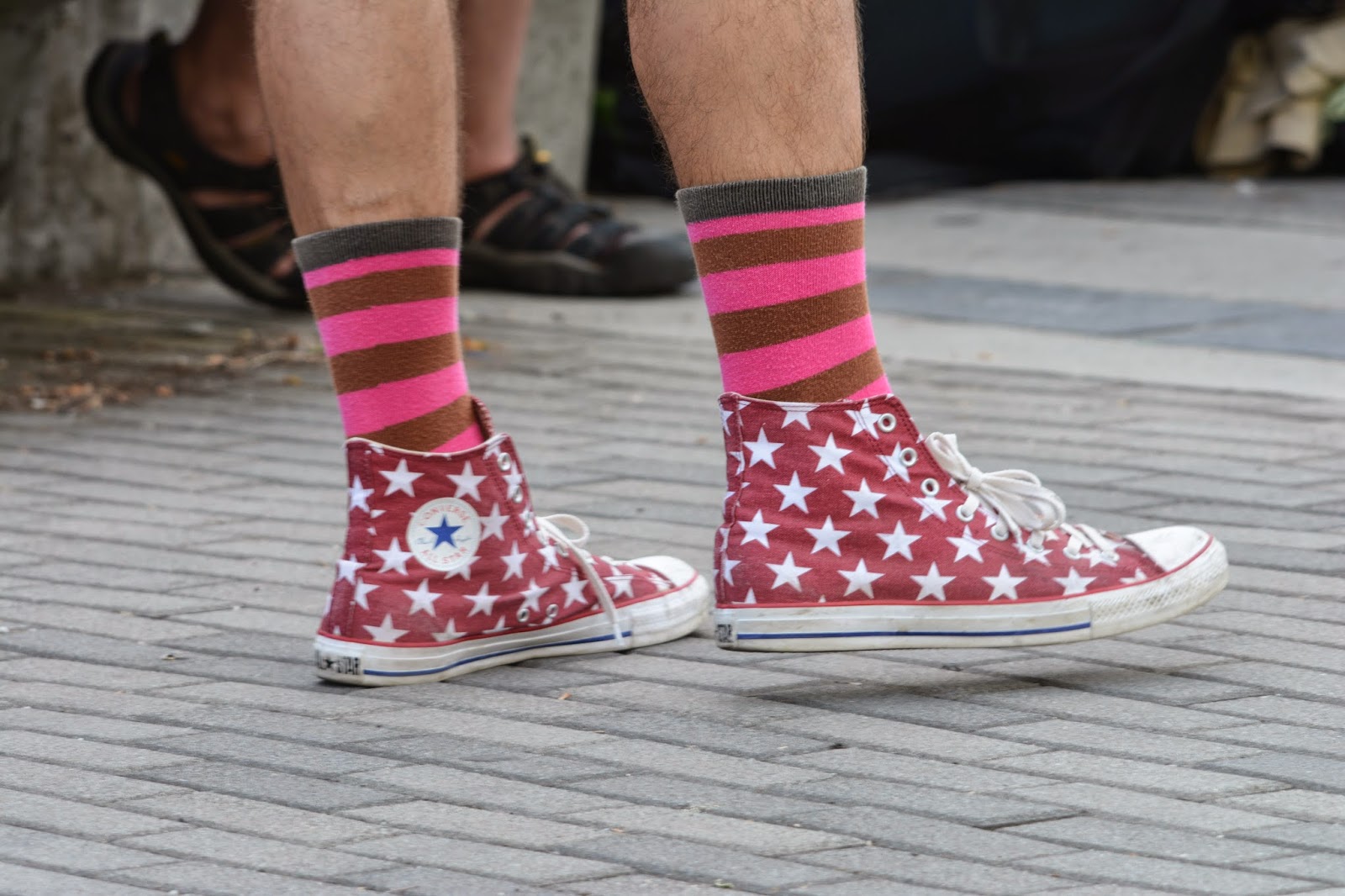 and we sat nearby, hoping the performance would be as interesting as.. 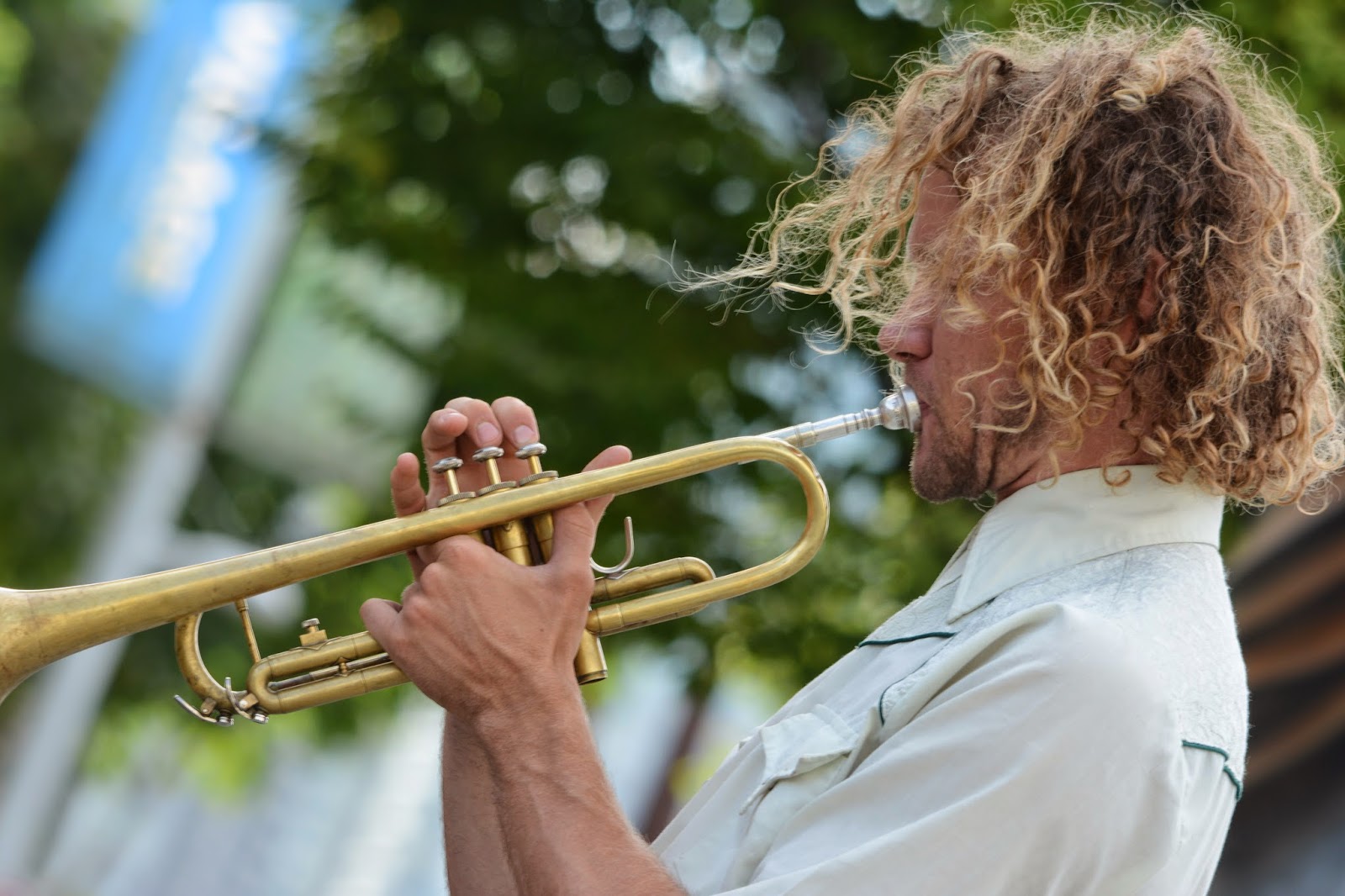 the characters they portrayed. 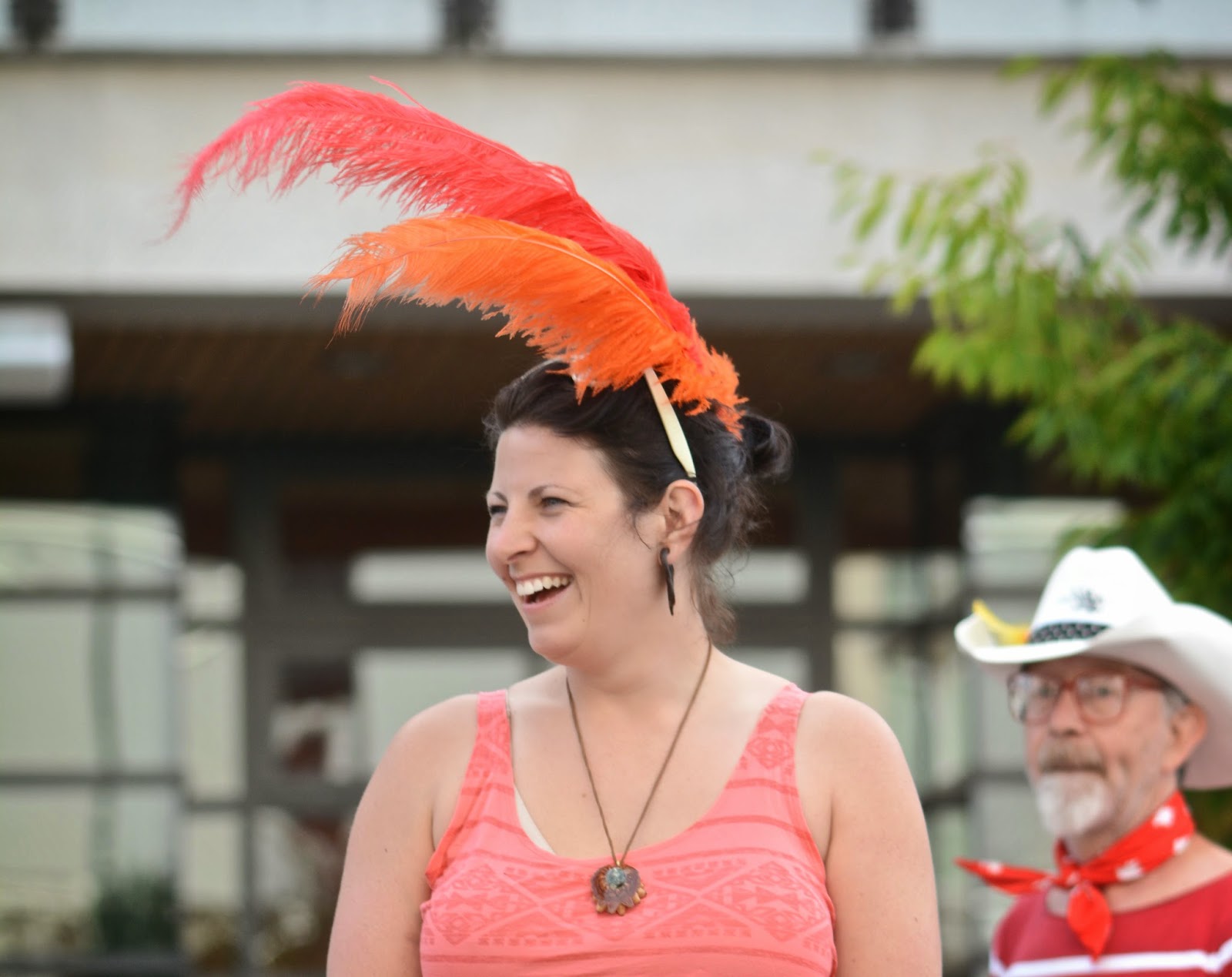 The music turned out to be full of "joie de vivre" but the volume level and, in particular, one of their speaker-mics, inflicted pain.  We had to leave. 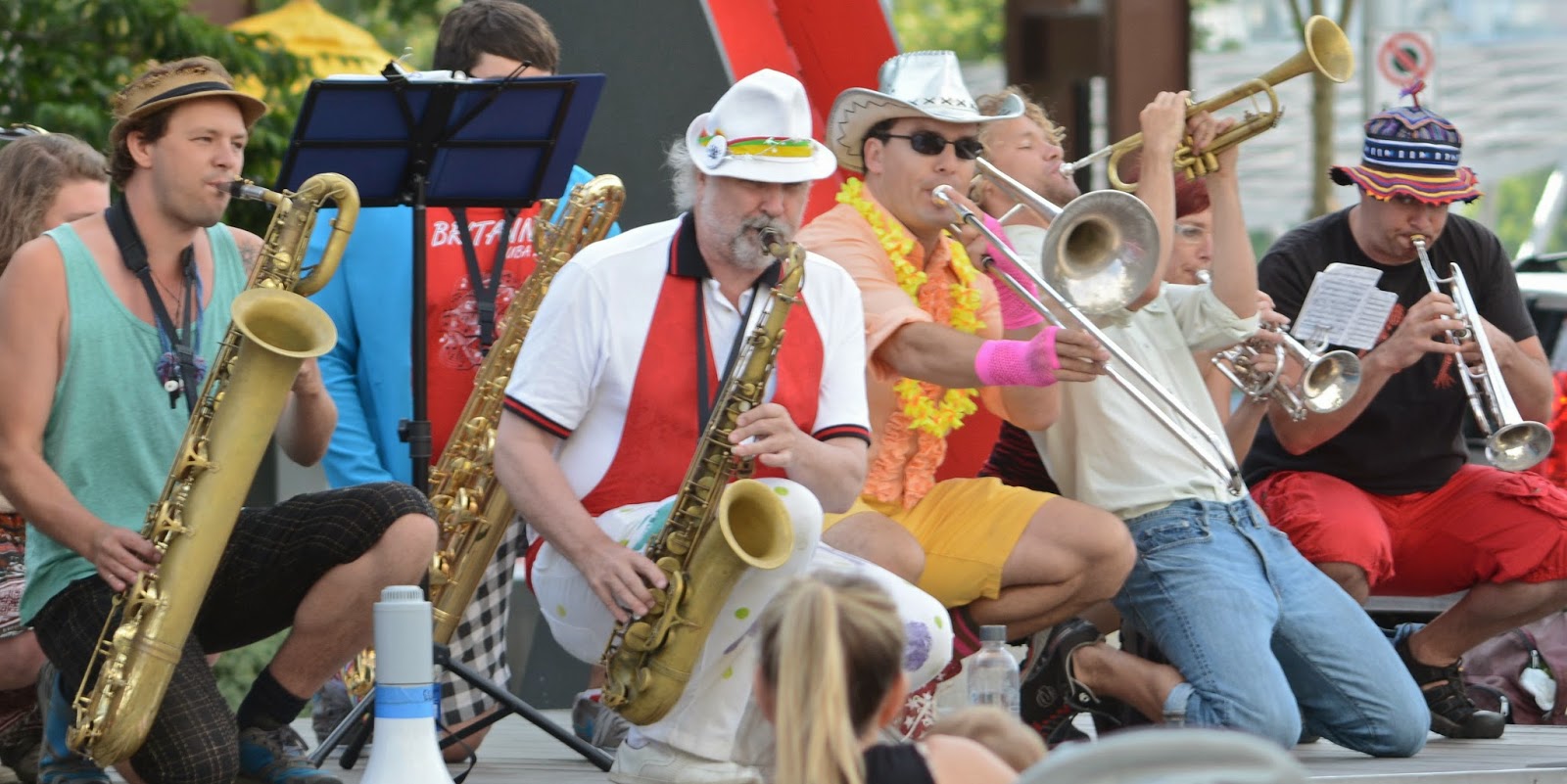 We biked home, had a small snack, and then headed back out again.  Bill was still feeling a bit under the weather, and I had seen that Jaclyn Guillou was going to sing at Vancouver Art Gallery.  The performance was to end at 8:00 p.m. so we fed Black Jack, jumped back on our bikes and off we went.  It's a nice little uphill to get to the Hornby bike path, and by the time we reached the gallery, the ride had worked its magic.  We had planned to eat supper later, but everything worked out to make the evening a perfect one. 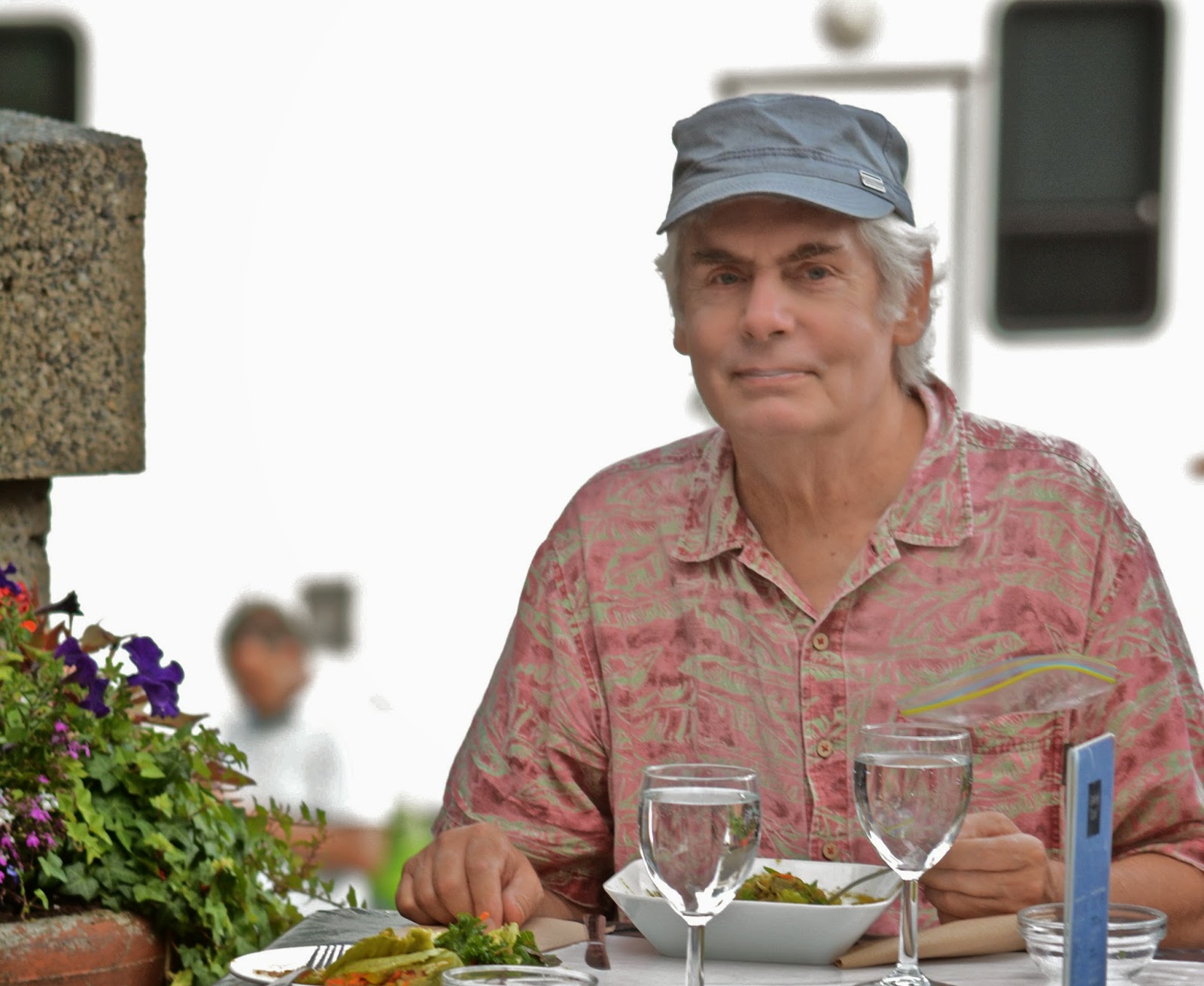 There was a corner table where Black Jack was permitted to sit by our table, the food was excellent and very reasonable, and Jaclyn's singing.. 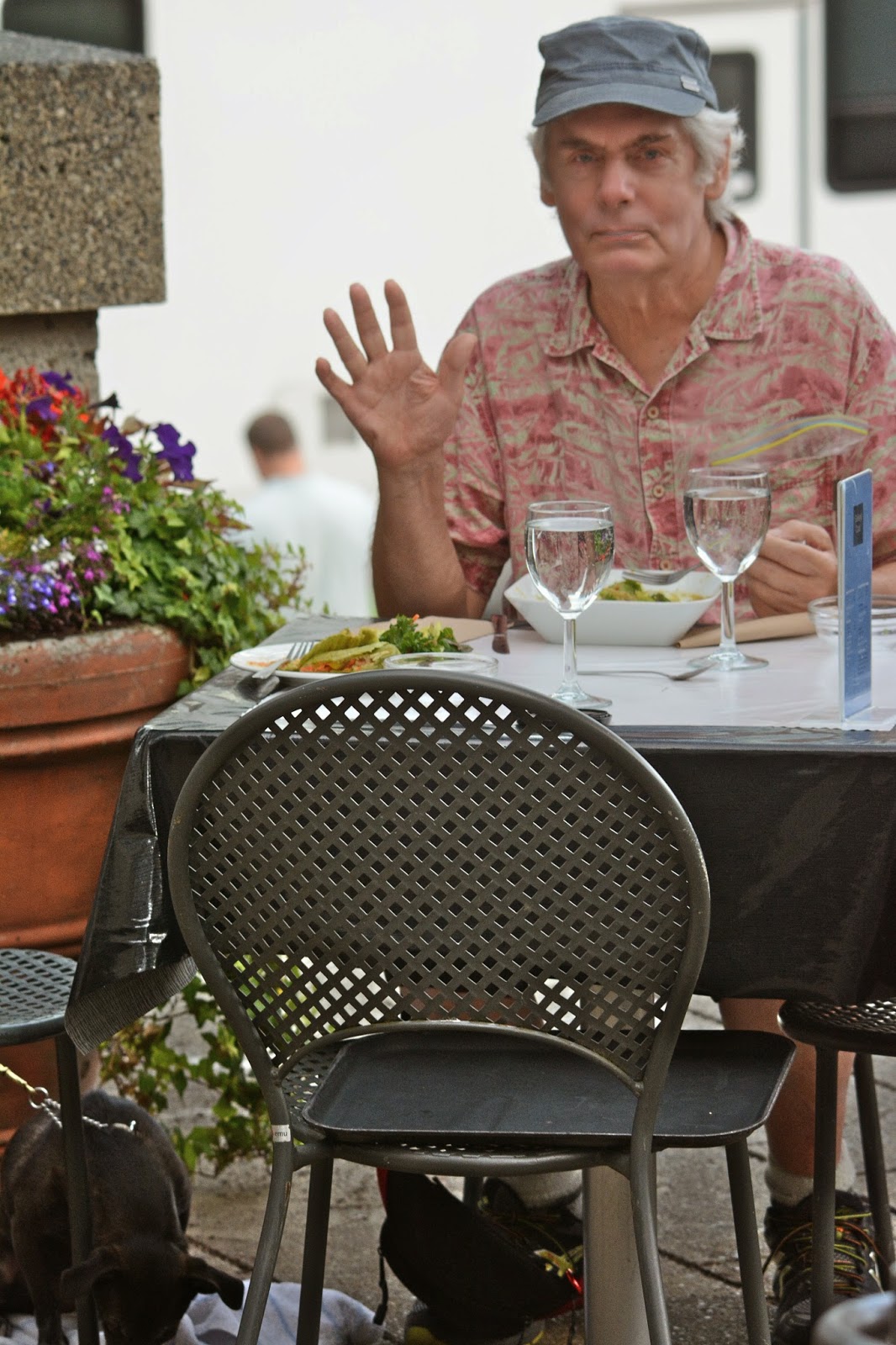 was every bit as magnificent as I remembered it the last time we had heard her, well over a year ago. 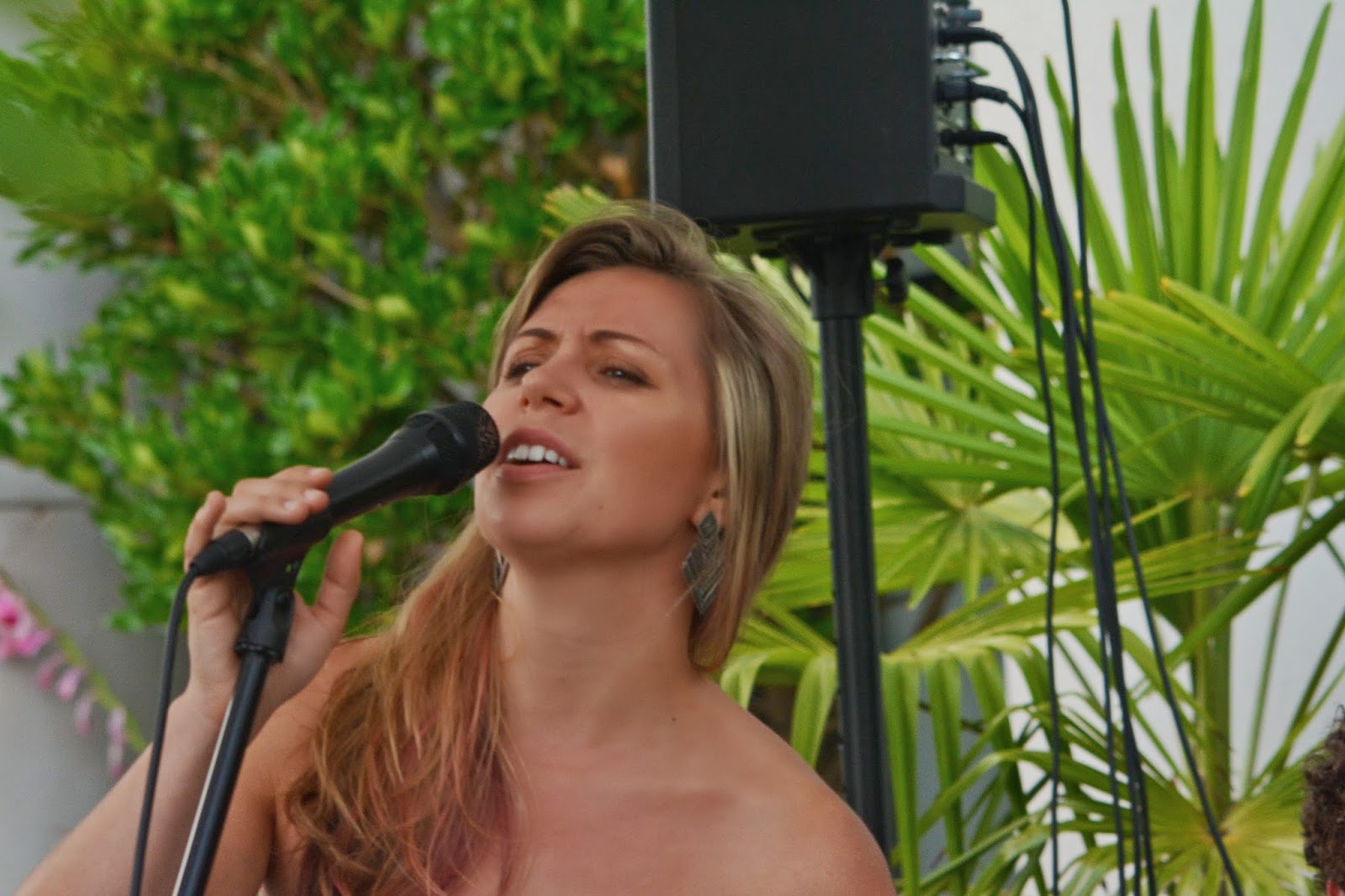 She and her fellow musicians (David Blake on guitar and Jodi Proznick on stand-up bass) were outstanding!  Great music and a bike ride = double magic. 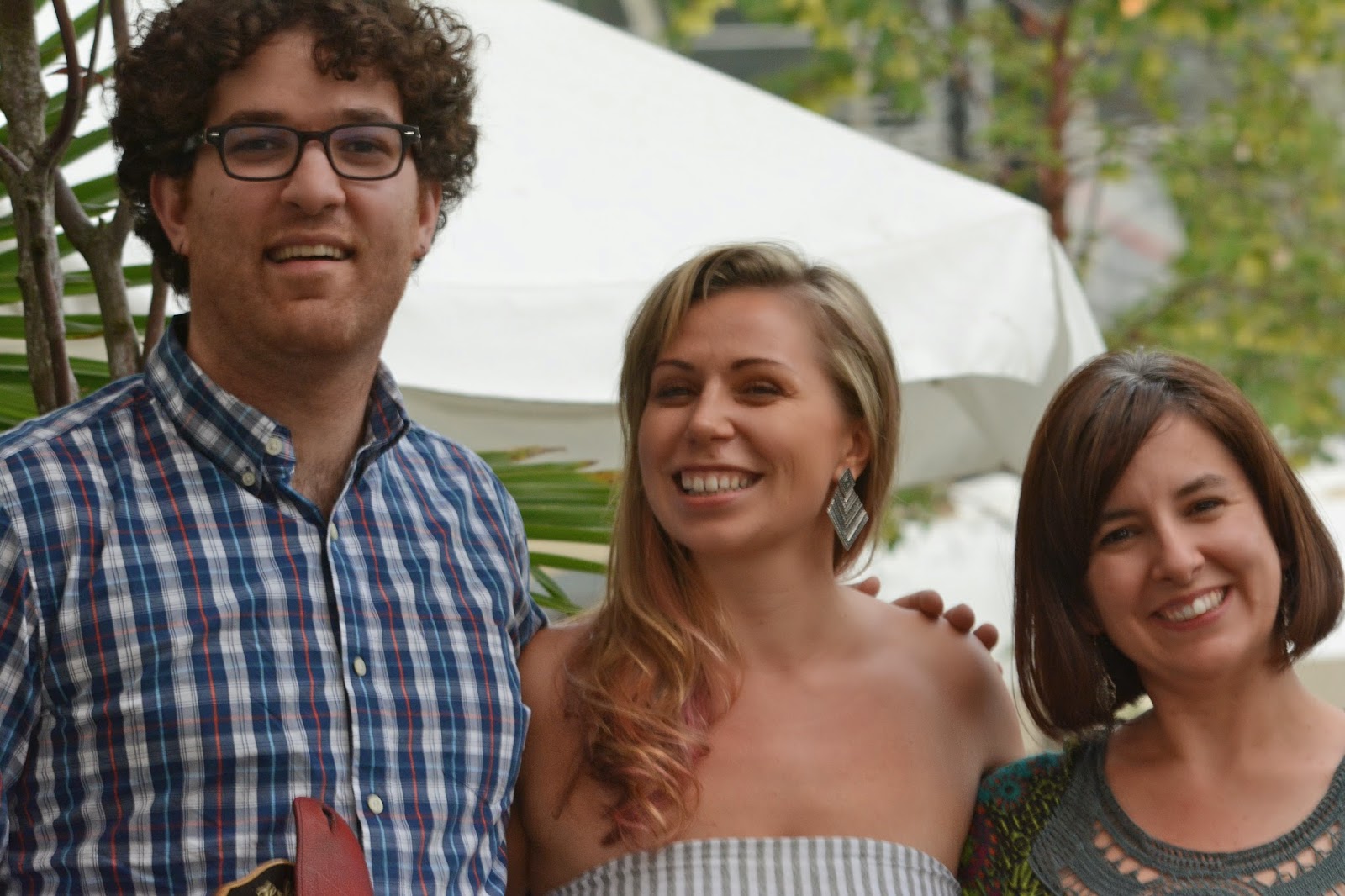 A gentleman took this picture of me taking pictures of the musicians.  He kindly sent it to me. It gives you a better idea of the beautiful surroundings. 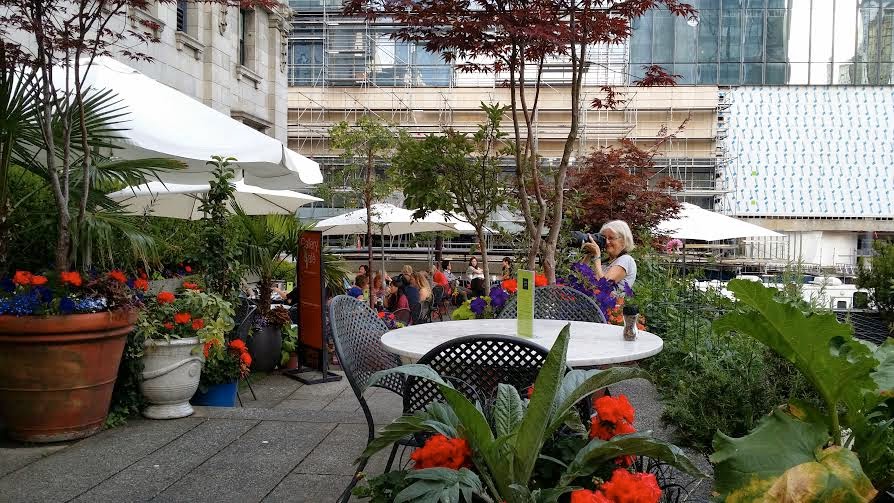 We could see this sculpture from our table, and from that distance, thought it intriguing.  I walked down the steps to take a photo. 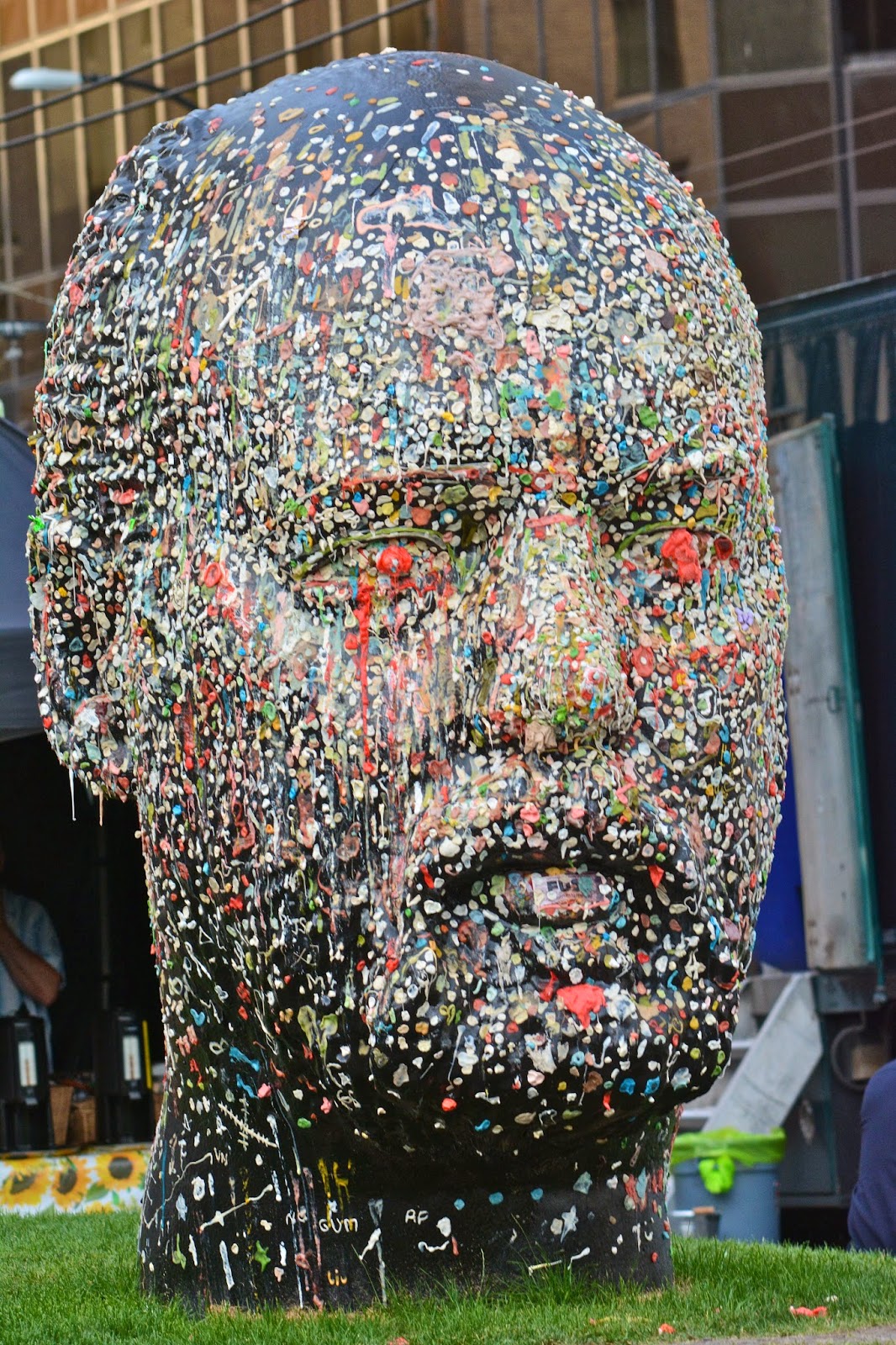 I stayed quite a distance away, as I was still limited to my 500 mm lens. I had no idea at this point what I was seeing, but only knew the colours and shapes were fascinating.  The left-eyebrow details were, I thought, quite wonderful. 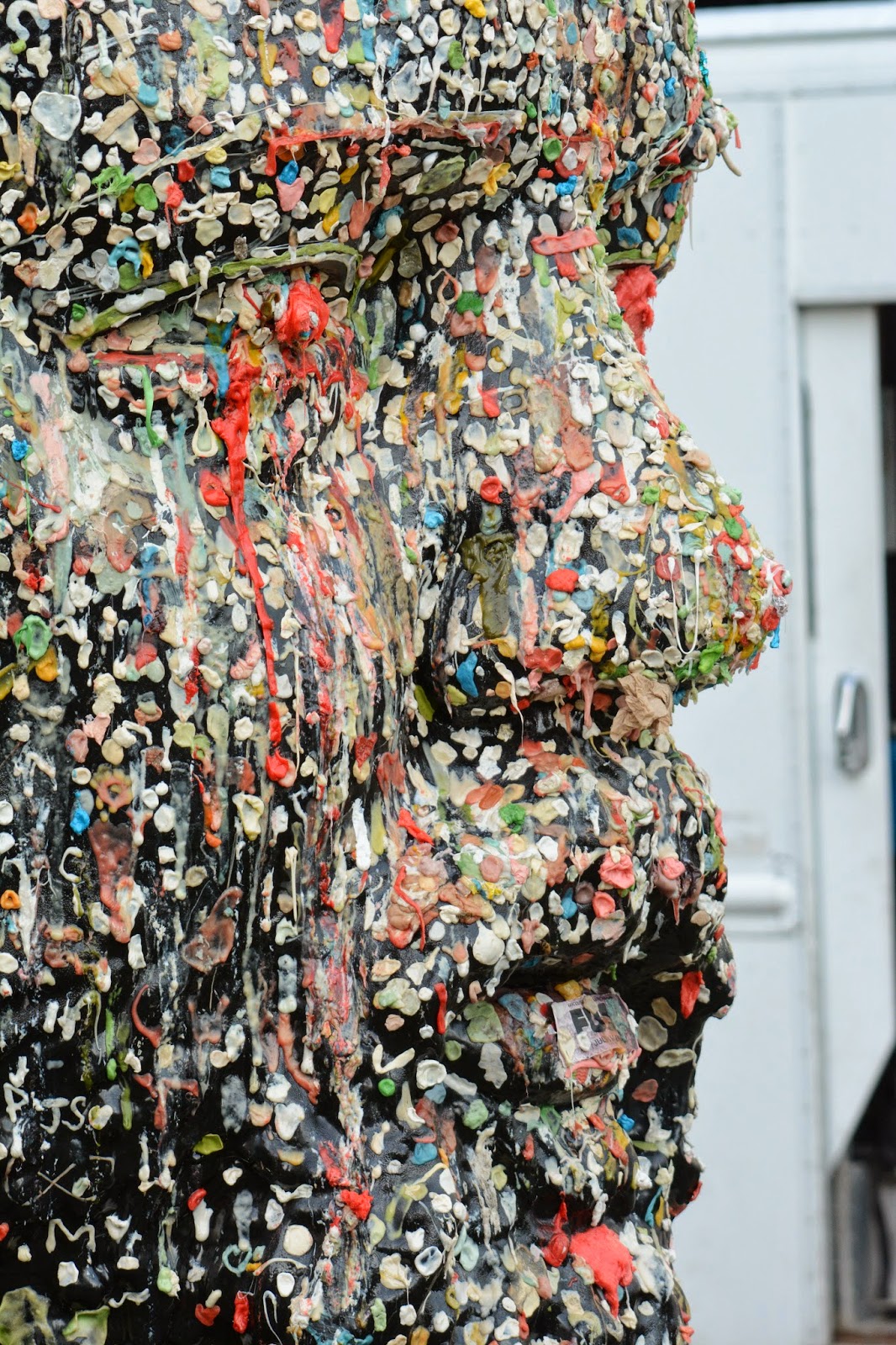 I called Bill to pose with it, and wondered why he looked a bit less than happy. 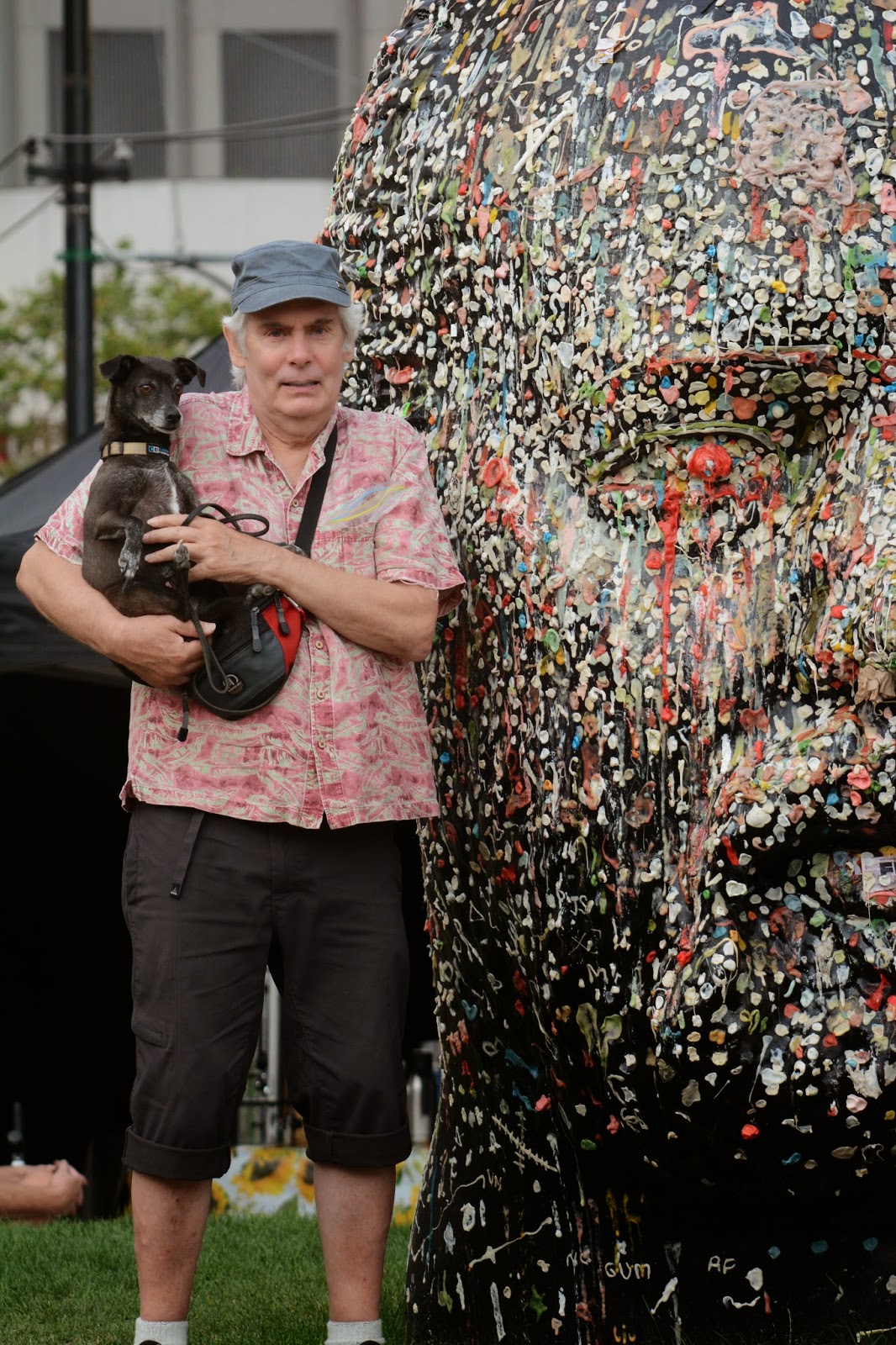 It was only after he explained to me that the entire sculpture was covered with bubble gum, and that bees were crawling into the crevices, that I understood his expression.  Can you see the two bees clinging to the eye?  Yikes!  Bill had heard of the artist, Douglas Coupland, and the sign near the sculpture explained that people are supposed to add bubble gum in any way they choose until the self-portrait will eventually be completely hidden.  Gumhead 2014,  even with its gummy smells and buzzing bees, added another element of fun to our day. 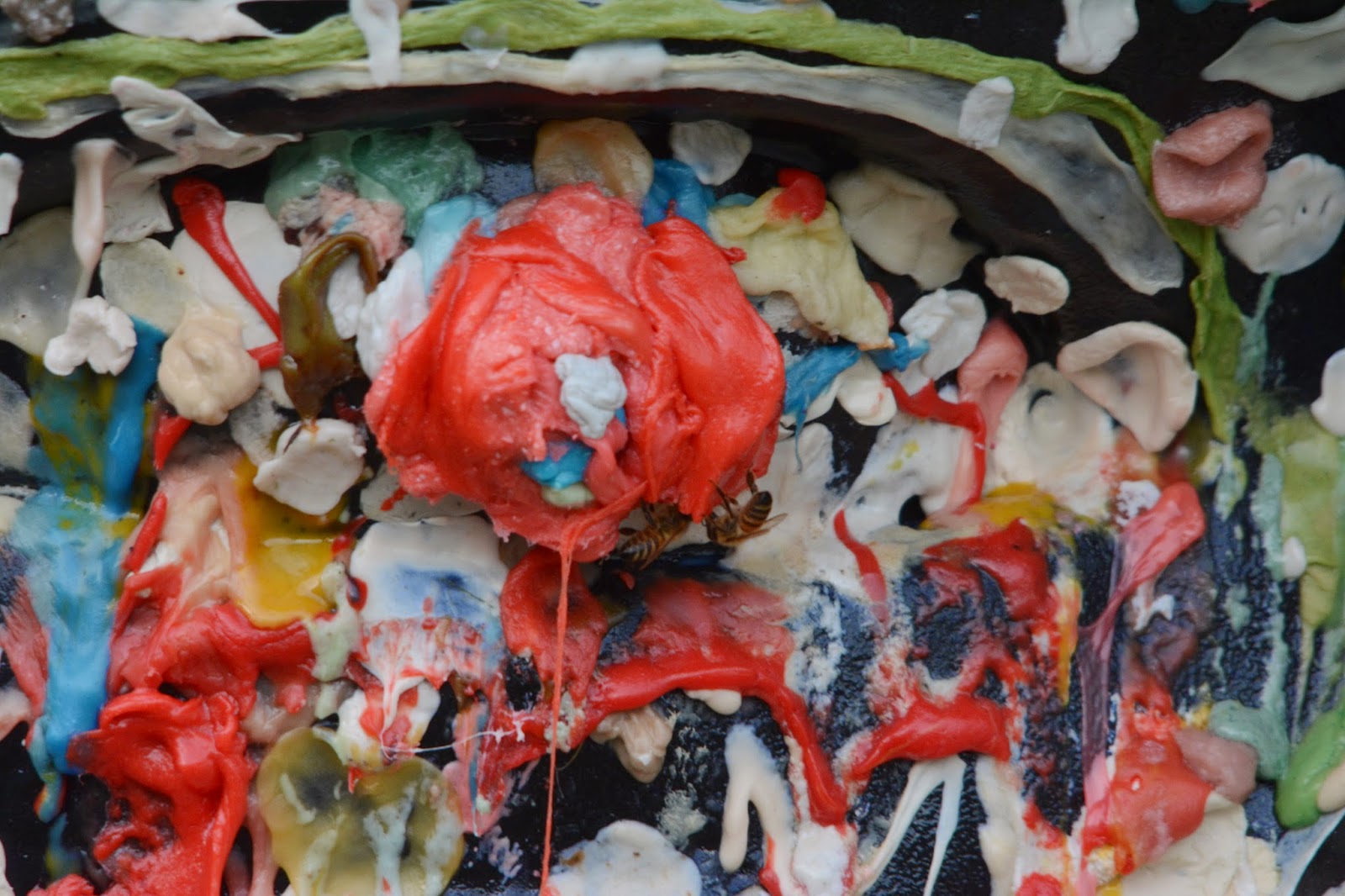 Walking back to our bikes, I admired the gallery's architecture and Bill wondered how the building will be used when the new art gallery is built.  Perhaps, his question will be answered at this site. 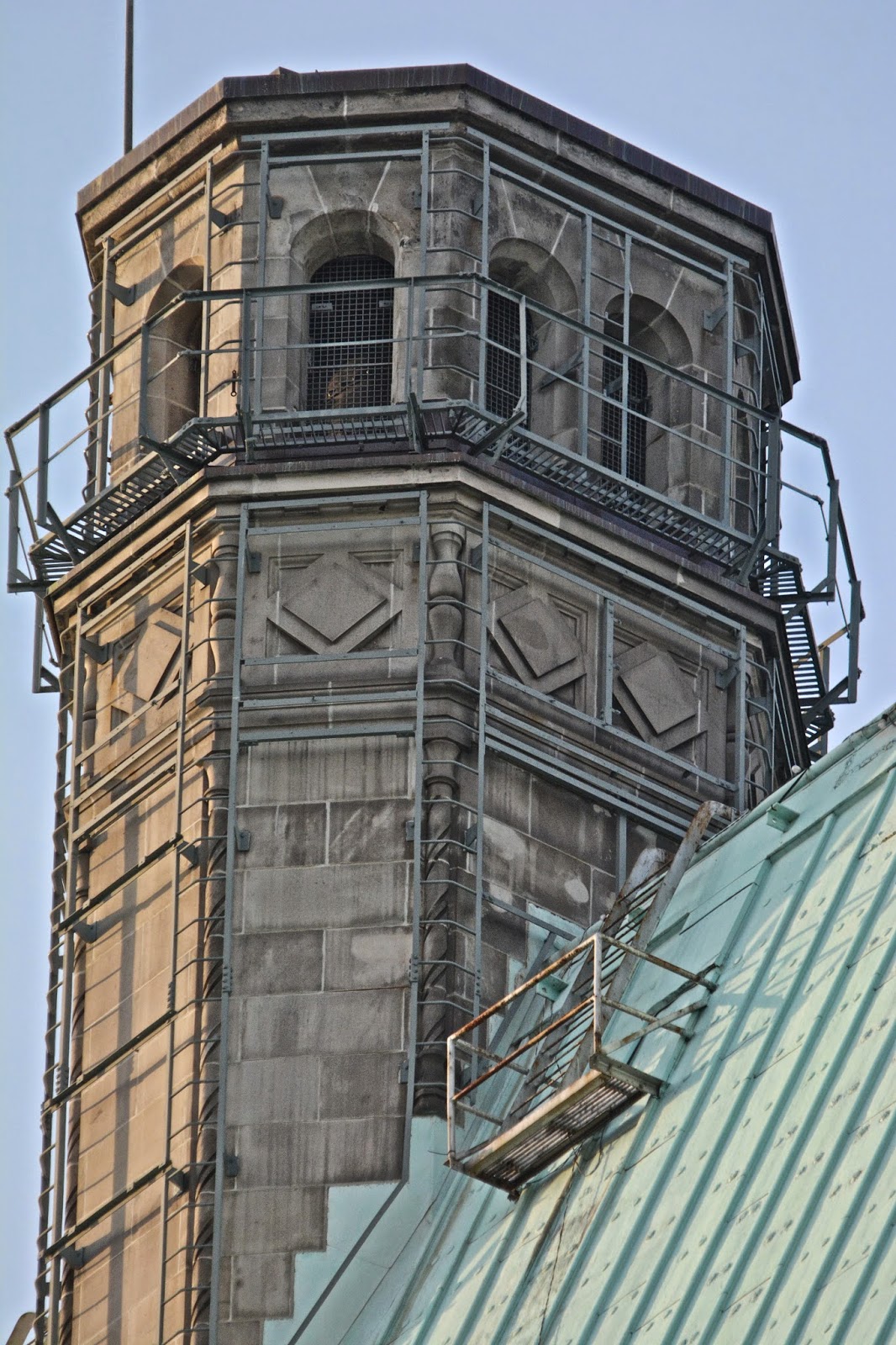 On the other side of the gallery, near the spot where we had locked up our bikes, a girl hired out her two snakes for anyone wanting to pose with one of them around their neck for a photo.  I don't know if that is legal. 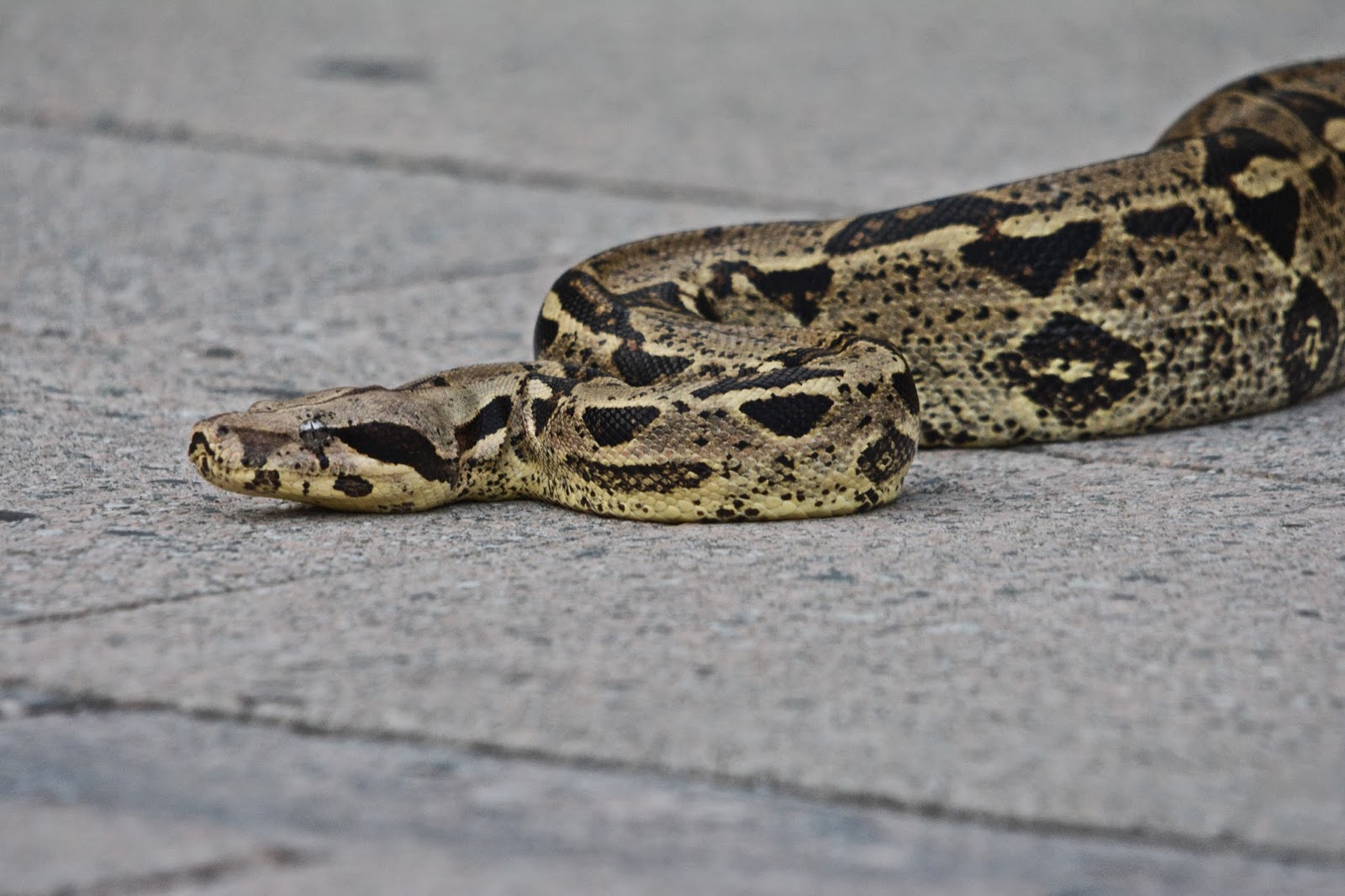 We weren't interested in posing, but many were.  I felt sorry for the snakes. 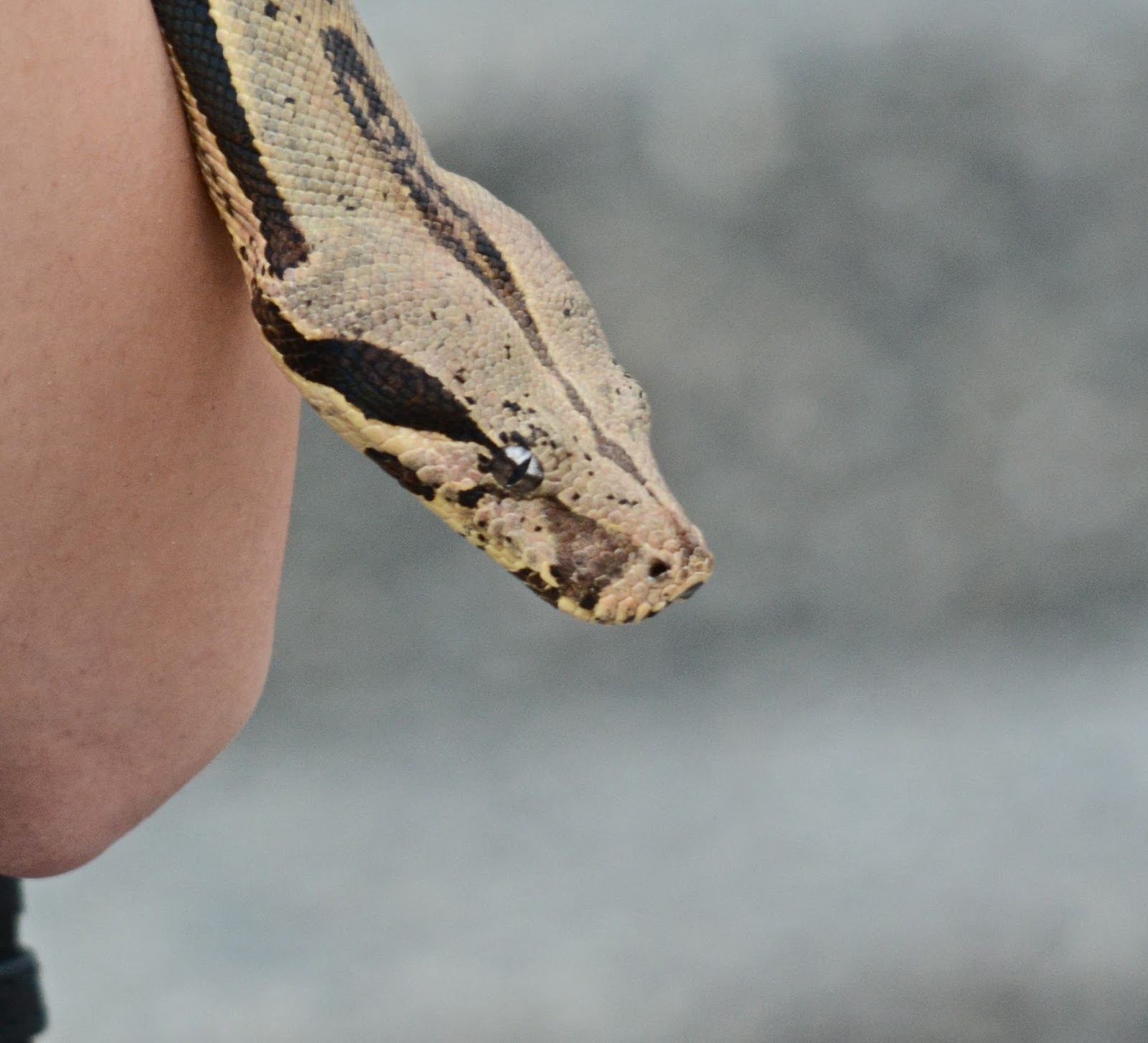 Riding home along the False Creek walkway, I admired the sky.. 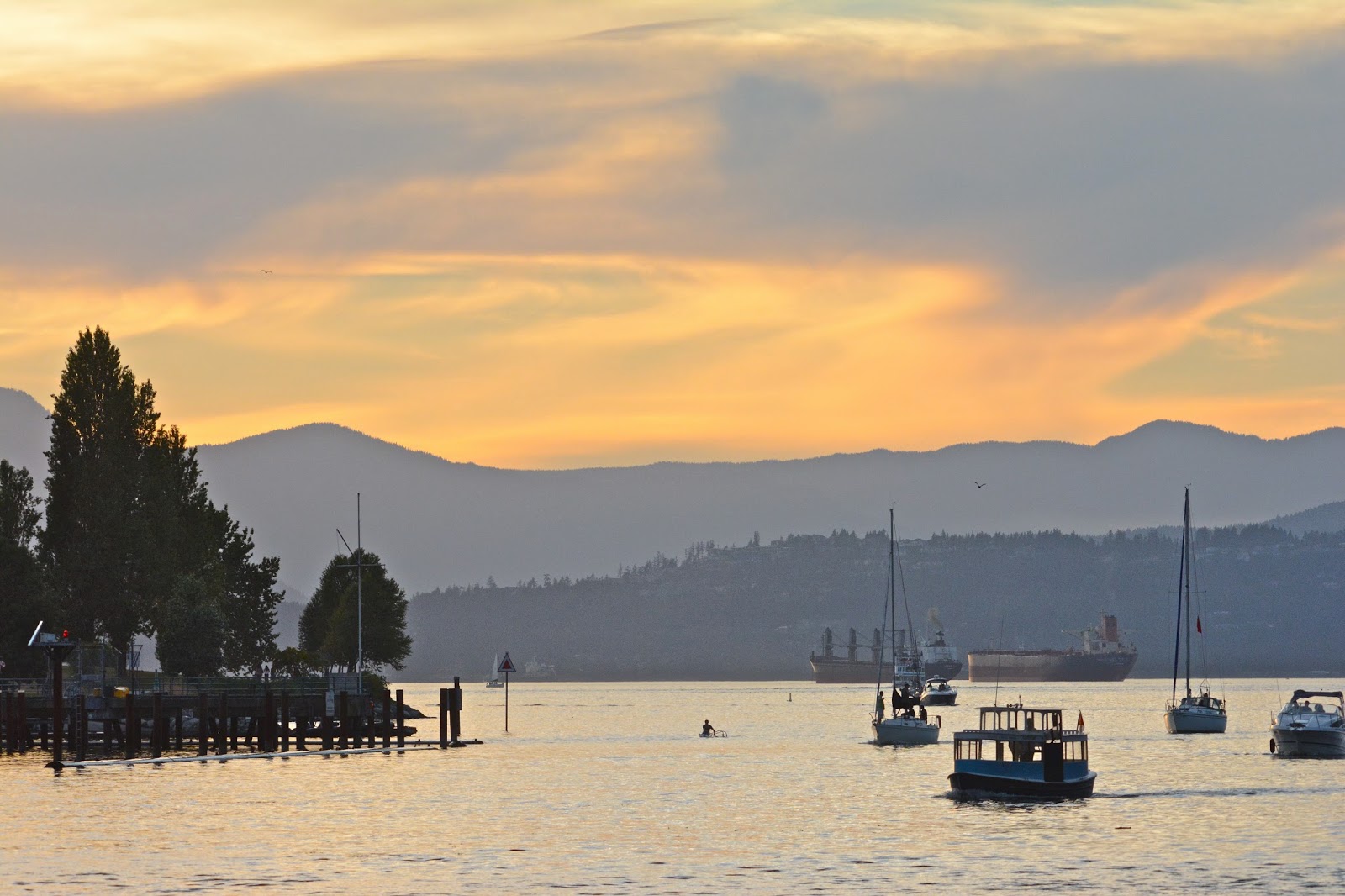 and Bill's ability to ride his bike like a skateboard. 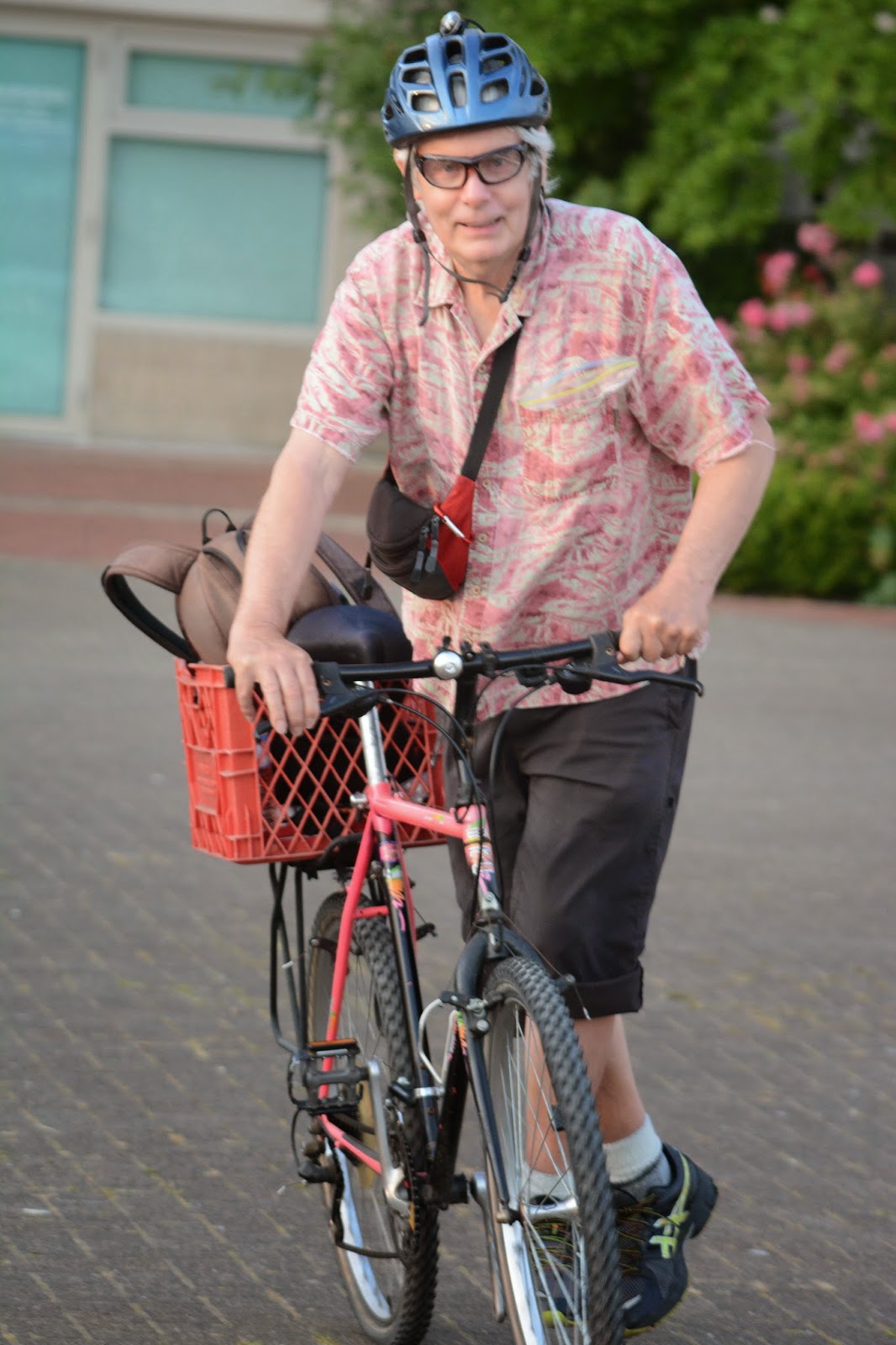 I've never been able to do that. 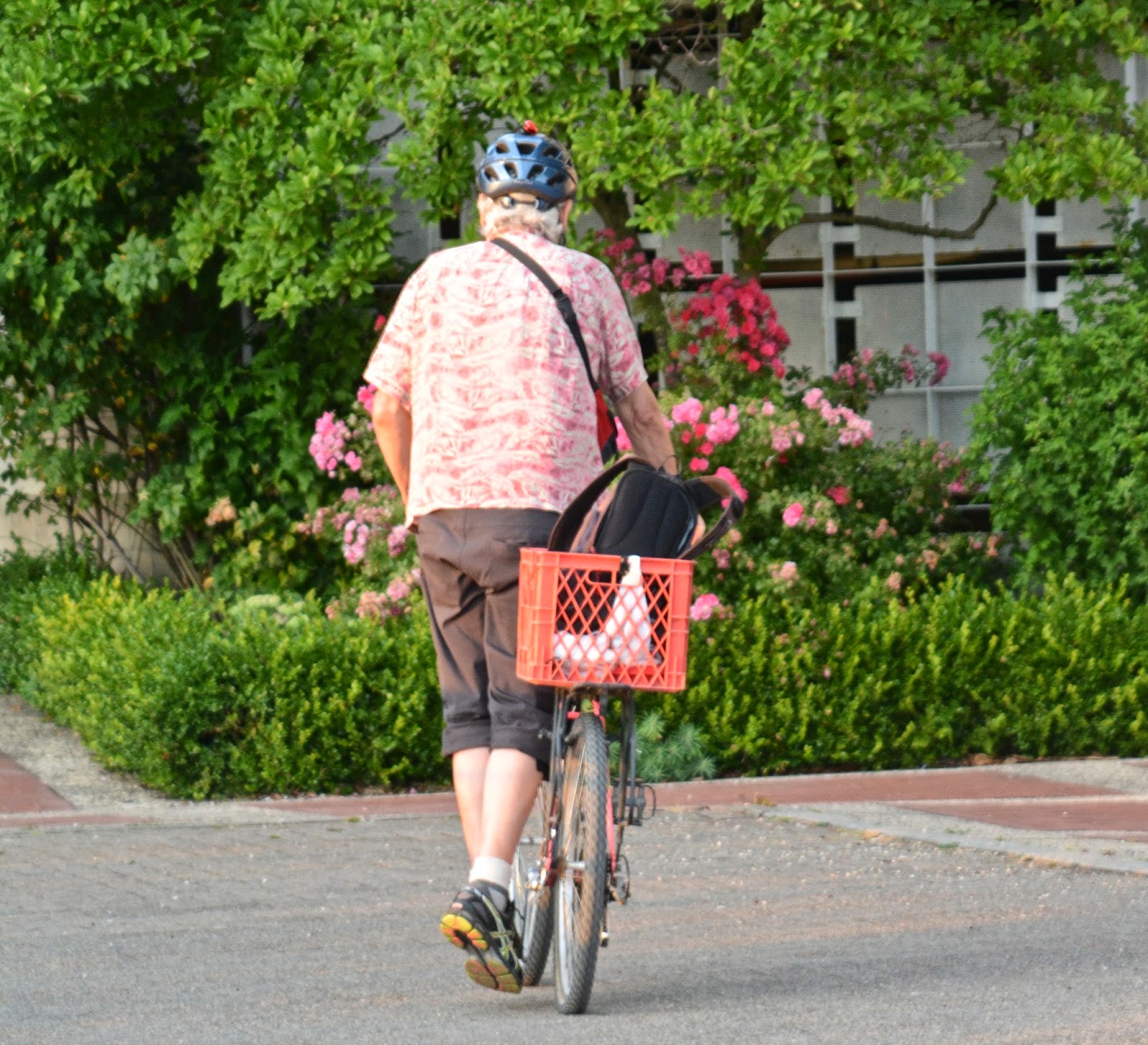 I leave you with that image of my beautiful Bill.  Plateaus (in anything) can be discouraging, but bike rides, good music, interesting art, and some initiative on our part turned our "blah" day into a spectacular one.  Thank you so much for stopping by.  For more photo journals, I think Melissa's meme (a new one for me) would make a great "next stop" on your blogging journey!  Happy Friday, everyone! 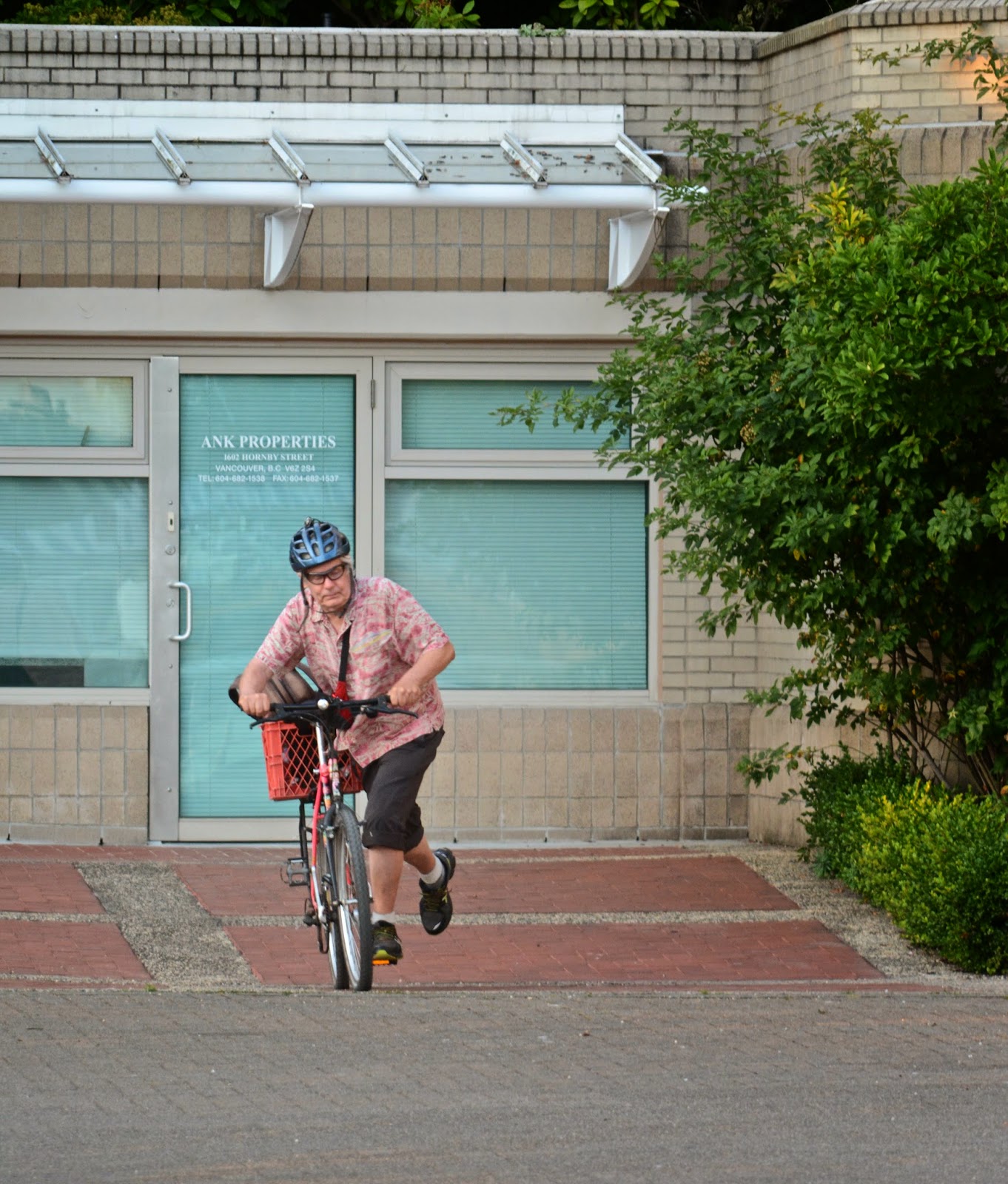